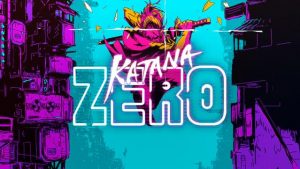 Askiisoft is one of those hundreds of indie developers that has been around for a decade. but had yet to produce a game that demands the video game industry to take notice. It was not until late 2015 after announcing that they were working on Katana ZERO did the two-man team of Justin Stander and Dave Zhang garner attention. Armed with a reveal trailer featuring a samurai moving with ninja-like agility while slicing through enemies like a razor blade on a model’s mug, Askiisoft’s product has been magnified with the prestige of a Devolver Digital publication.

Read on, for I can confirm that the publisher support is warranted. 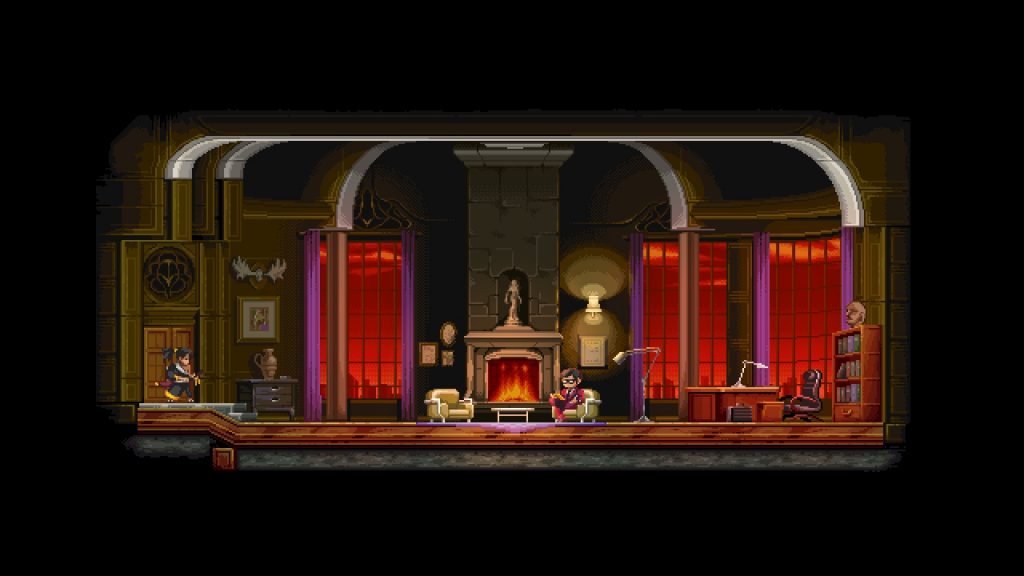 The calm before the storm.

Though at the time of this writing, Katana ZERO lacks an official ESRB rating, it is undoubtedly a game for mature audiences. Those old enough to remember Robocop might recall its flood of blood and swarm of swears; Katana ZERO is equally profane, and similarly violent. By the time players clear an area, they will have repainted the walls red. Make no mistake: mass murder is the objective in this game; hyper-violence is its selling point. Even so, the violence is more tolerable than a game like Mother Russia Bleeds.

In terms of language, aunties are gonna have to upgrade to business class at Sam’s Club to afford all the soap required to wash the mouths dropping F-bombs. As gamers advance through Katana ZERO, the stakes are raised proportionately, and thus also tension, and with that tension, in-game characters become more unhinged, cussing like “F” is the only letter in the alphabet that can begin a word (yay for alliteration?). The biggest offender also happens to enjoy snorting cocaine, and will offer the player-character a hit. This individual also keeps the company of certain kinds of women who will literally take a walk of shame before a boss fight. 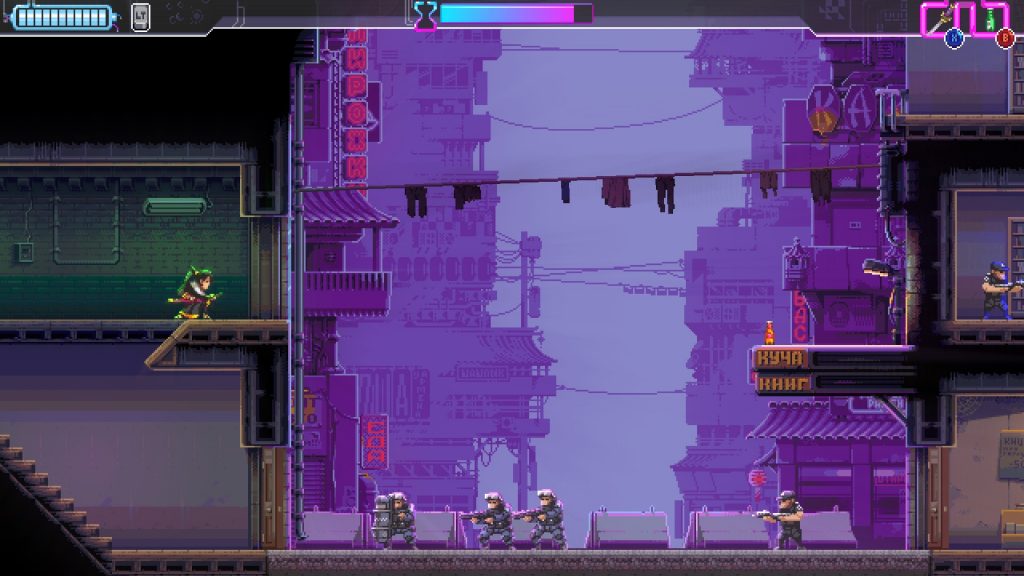 About to be death from above in this piece.

Katana ZERO throws players right into the game at the start of a mission. The player-character, who will be later mistakenly dubbed as “the Dragon” (quotation marks deployed for this reason), is tasked with rescuing scientist being tortured and held hostage inside of a sketchy building. Demonstrating uncanny skills, inhuman reflexes, and an inexplicable ability to rewind time as if it were a VHS tape, “Dragon” rescues the scientist, only to witness his murder by the hands of a man named “V.” Indifferent to this unexpected event, “Dragon” slays a few more goons before visiting a counselor who conveys that their employers are disappointed with the mission results. Nevertheless, this point of contact discretely issues “Dragon” his next mission through classified dossiers, which very much remind me of the mission screens from Shinobi (1987), though these are destroyed via cigarette lighter.

The screen shakes can be turned down. I recommend against it.

Such is the gameplay cycle of Katana ZERO: repose, slay, debrief, acquire next target, repeat. But do not be mistaken by what appears to be routine; this game exudes style in a way that many games promise, but rarely deliver. Like Dead Cells, Katana ZERO can be played at a crawling pace, but it demands haste even when players lack the skills for such a tempo. Askiisoft are not sadists, however, providing the tools necessary for success. Even though death comes as frequently as in a game like Super Meat Boy, this game is similarly expeditious with getting gamers back to the starting point after suffering a minor setback. The post-section camera lens perspective replay is absolutely a SMB throwback. 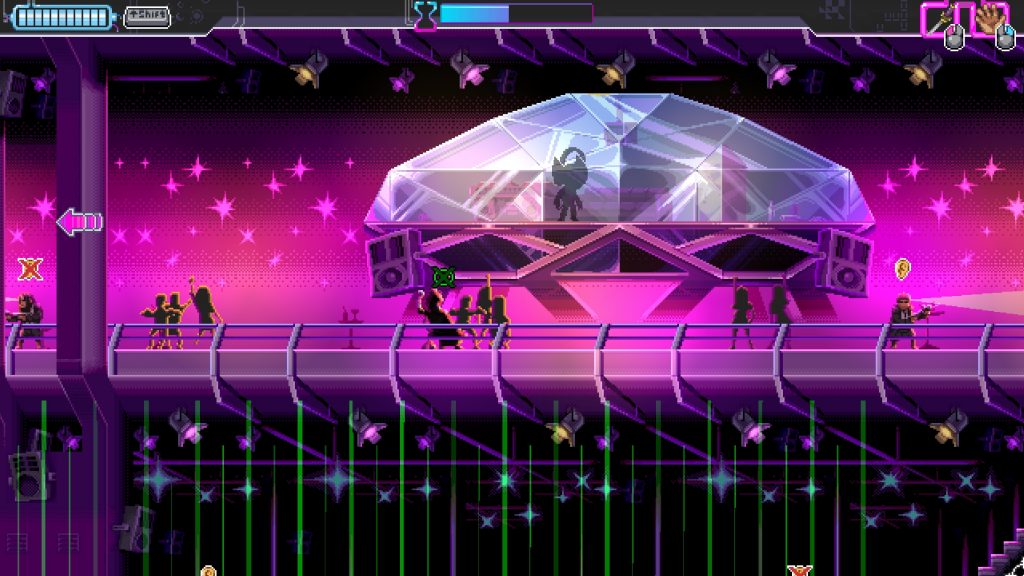 “Dragon’s” targets are frequently located at the end of a stage, with katana-fodder standing in his way. Typically, it is not always necessary to kill everyone in a section, but it is recommended, especially as stealthily as one would in Mark of the Ninja; sound attracts more baddies, and while “Dragon” exibits his expertise with a blade, he can only deflect a few bullets at a time, with the rest likely ending up in his chest cavity.

Indeed, bullet deflection is an optional, but highly recommended recommended game mechanic; combined with a slow-motion meter, the effect of a bullet soaring through the air and deflected into a headshot creates a sensation that must be experienced. Once players understand the synergy of the tools “Dragon” has at his disposal, such as using pickups to swiftly dispatch enemies at a distance or the rolling dodge that grants invulnerability, it is possible to through levels in one fluid motion, just like the airborne swordsman on the box art. The action in Katana ZERO could be described as an elongated sequence such as that found in Ninja Scroll where Jubei Kibagami takes on the army of ninja, hacking and slashing them to shreds: awesome, and memorable.

Use the air to jump over shots, slow motion to track the next, deflection, roll, death. When this game flows, it goes!

Awesome action without purpose, without a story, is how we ended up with Metal Gear Solid V—a GOTY candidate when GOAT could have been possible. Katana ZERO does not make this mistake of neglecting to provide reasons why players care about “Dragon.” The between-mission interludes facilitate player-character affinity in clever ways. For example, in one mission, girl working in the lobby of a hotel accosts “Dragon” about his samurai robe, and they exchange banter about how he is using a bathrobe to cosplay. Actually, these are chat options; players are frequently given choices to carry conversations, including the option to be a total jerk and frequently interrupt people or cuss them out. To my knowledge, many of these options serve the purpose of “role play,” as an avenue for autonomy;  only achievement hunters will find reason to play through the game multiple times and trying different speech options.

Though its story is one of the most interesting aspects of Katana ZERO, it is also the game’s biggest flaw. That is because it is incomplete! As soon as the game gains momentum in terms of providing answers for all of the teasers and disjunctures, the game ends. The good news is that Katana ZERO sold over 100,000 copies in just a few days, and Askiisoft has claimed have gotten right back to the grind with the (free) DLC; the bad news is the wait, and arguably, an incomplete game in the meantime. This is what Early Access is for! 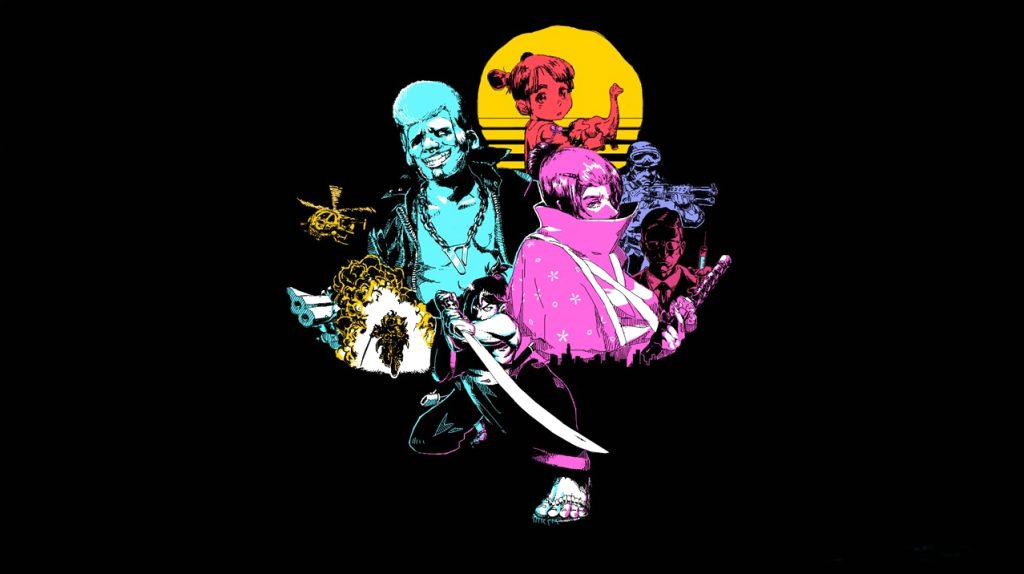 I included this because I simply like the game’s style.

Katana ZERO’s aesthetics draw a lot of comparisons to Hotline Maimi, which I believe does this game a disservice, for it is far more detailed in the visuals department. Even a layman can see that there are more animations, colors, pixels, and effects in a 2D side-scroller versus a top-down perspective. Hotline Miami does not possess a patent on neo-noir, and so does not “own” it; there is plenty done here and can still be done with the conventions of the genre. What Katana ZERO brings to the table is a post-war dystopia like Judge Dredd, where capital crimes happen all the time but the authorities have more pressing concerns such as suppressing coups…such as the one where “Dragon” finds himself….

Slumming it up next door to some rowdy neighbors.

One feature where Katana ZERO is most like Hotline Miami is in the area of its music. At times, it sounds like a Yuzo Koshiro throwback to the days of Revenge of Shinobi. “You Will Never Know” has enough pop to it to be a playlist favorite. Third District” is a tune that captures the pangs of a dystopic slum. “Delusive Bunker” sustains the trance and focus needed while on a penultimate mission. “Prison Air 2” maintains a tight, pulsating beat reminiscent of the first mission music in LOADED, a game also thematically based on a prison escape. “Snow” is both a song I do not get to hear enough, as well as a character I do not see enough. WHERE IS THAT DLC AGAIN??? 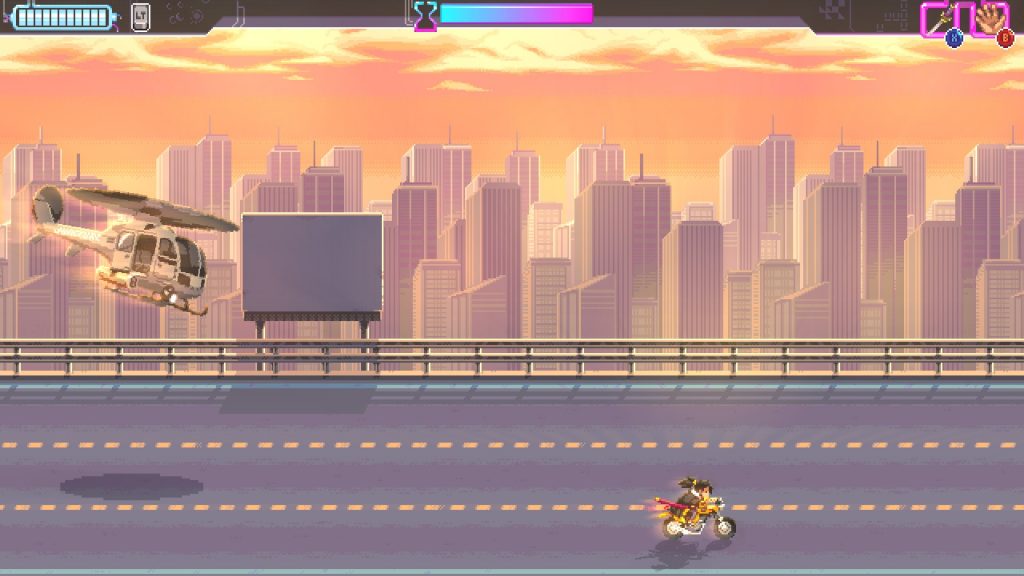 The bike sequence reminds me of several fond memories, such as the TMNT arcade game skateboard sequence or the Shinobi III bike level.

Katana ZERO is a game that I would like to rate higher than I have, but leaving me hanging with a “to be continued” ending is not a sin that I can easly forgive. I know that Askiisoft has been working on this game for almost four years, and because of the awesome everything else do I not  slam what feels like the developer failing to finish this game because of running out of money, time, or whatever else might be the reason that this release will remain incomplete until the DLC drops. Give it to me, please, and give it now! Katana ZERO and I have unfinished business…

Katana ZERO is an outstanding, though unfinished, samurai slasher.