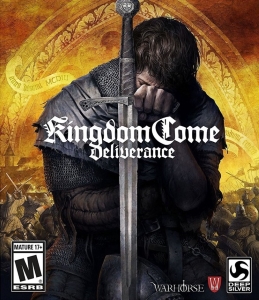 When I first saw footage of Kingdom Come: Deliverance, I was immediately enticed. With the faith-based reference in its name and a medieval setting, I knew I had to try the game out when it launched. It actually wasn’t until I got it in my hands that I realized what I was getting myself into: an open-world medieval civilian simulator. Thanks to incredible storytelling and a lively world, Warhorse has made something remarkable fans will be talking about for years. 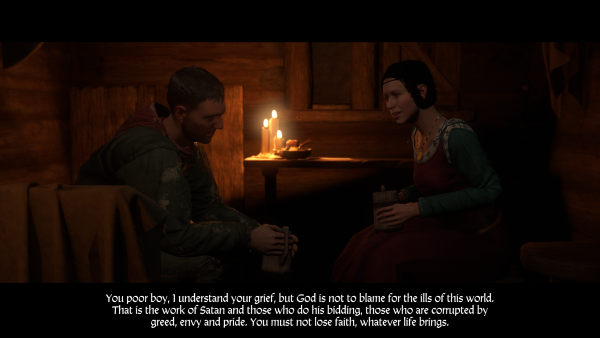 Christianity is widely represented in the game, though it can sometimes seem to be reduced to a relic included to lend credence to the game’s historical setting. Many of the people you encounter will express their faith in God and Christ, and their struggles to maintain said faith. There are many who, like real life, wear it as a facade and continue their devious deeds. In that respect, this may be one of the most lifelike depictions of Christianity in society I’ve ever seen in a game. At the outset, I’d hoped it would drive the story, or perhaps that the developers were, themselves, expressing their faith through the game. I don’t believe either of those to be the case at this point, particularly given some of the other content in the game. It is refreshing to see it depicted as it is, however.

1400s Bohemia is a harsh place. It’s a land where an army of bandits and Cumans (Turkish warriors) roam the countryside, pillaging, slaughtering, and raping. People are cut down in their own streets. Combat the player engages in will often leave his weapon and clothing bloodstained. People are decapitated or hung from posts and gibbets. This is certainly not something you’d want a young child experiencing.

There is liberal use of adult language, including F***. Expect nothing to be off limits. If it’s in an R-rated film, it’s probably here in spades. 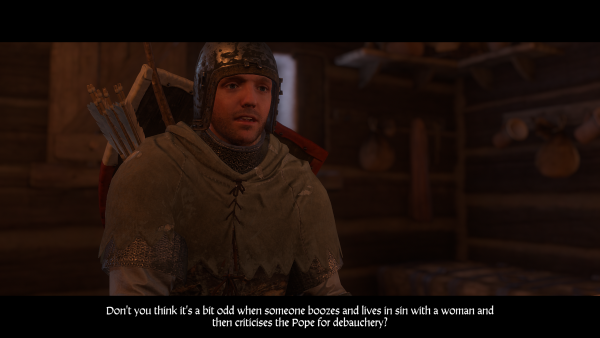 Sexual content is here unabashedly. There are mainline quests that can expose the player to bare-breasted women. There’s plenty of sexualized language in the game as well.

There’s prolific use of alcohol in the game. In fact, you have to drink schnapps to manually save the game. Getting drunk can affect your speech and other stats as well. There’s a quest where you can get drunk with a priest and have a night full of lascivious behavior, complete with puking from the church’s belfry. There are drug-induced trips that can lead to some pretty insane moments.

Abuse of power, raping, pillaging, and more. It’s heavily implied that the barmaid in your hometown is also your nightly sexual conquest. You even get the option to throw horse dung on a newly whitewashed home due to the owner’s nationality.

You can often navigate through situations without having to resort to violence. Many of the NPCs express their daily lived Christian faith as well. 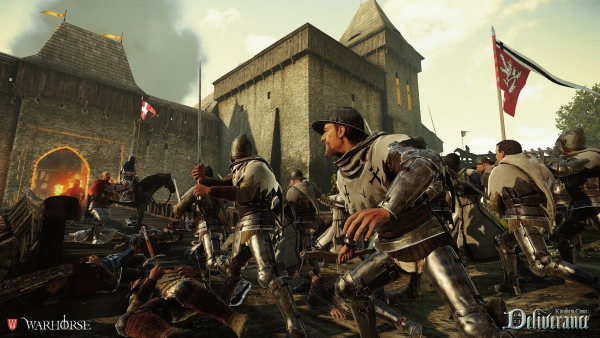 Kingdom Come: Deliverance may well be one of the biggest surprises of 2018. The hype train was practically dead in the station until the game got into players’ hands. Since release, however, it’s gotten a steady supply of coal shoveled into the steam engine of attention. It is now well on its way to the hearts and minds of an ever-growing fanbase.

First, I want to talk about what I think Kingdom Come excels at. Its narrative and storytelling are among the best I’ve ever witnessed in an open-world game. The characters all feel like genuine people with germane lives. From stable boys to rulers to lecherous priests, bandits, they all exude an air of realism. Emotions, motivations, and more are all wonderfully conveyed with each story beat and interaction you’ll have. There are several story beats you’ll remember for years to come.

Henry, the game’s main character, is particularly well done. The son of a blacksmith who loses his parents in a raid, the once-lazy 20-something not only takes us on a wild journey across middle ages Bohemia, but proves himself to be a likeable, relatable chap along the way. From sleeping in the dirt to entertaining at high court, whether dealing with lowborn charcoal burners or the snobby heir apparent to a throne, he’s genuine throughout. Everyone wants to like Henry, because we are all Henry in a manner of speaking. 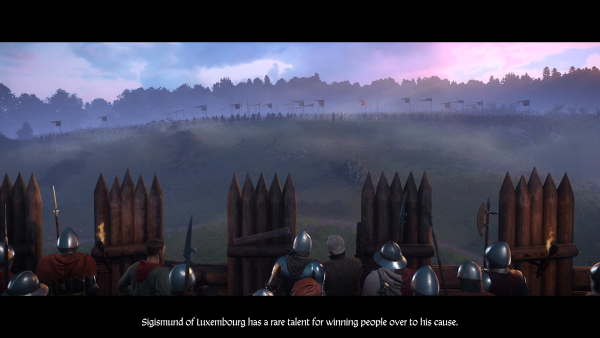 The gameplay is a somewhat more complex issue. At its heart, this is a first-person action RPG akin to Skyrim (you’ll only see Henry from the third person in cutscenes and inventory). The more you perform a task, the more proficient you’ll become at it. All of the major expected systems are here: speechcraft, strength, combat techniques, horseback riding, alchemy, and the like. The system feels organic and works well for progression.

At first, I had a few problems with other systems in the game. Like a survival game, you’ll have to manage both Henry’s hunger and fatigue, being mindful to eat and sleep appropriately or suffer significant hits to your stats. Until you get the hang of it, the mere existence of the systems can be frustrating. I once stayed up too late (without realizing it) and got into a forced fistfight while Henry constantly closed his eyes, begging for rest. Once you figure out what to look for and how to solve these issues, they become a minor inconvenience. I’ve seen diehard fans argue it as a bid for realism. My counter would be to allow me the option to forego the same monotonous tasks that drive me from the survival games like ARK. 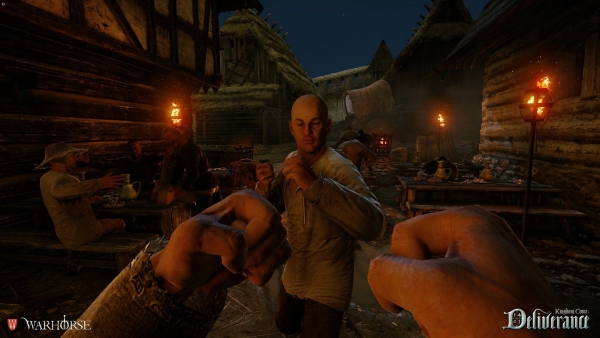 While we’re discussing gameplay mechanics that are frustrating, I’d like to mention the combat system. At its core, it plays like For Honor, allowing you to guard and attack directionally, looking for an opening to exploit and allowing perfectly-timed blocks to slow time. It’s pretty enjoyable one on one, with just enough challenge. If you’re outnumbered in an encounter though, you better settle in for a long bout. You’ll spend most of your time trying to keep one foe between you and the other while parrying and countering the one you’re engaged with. It can feel almost unmanageable (and perhaps that’s intentional) but it made for some particularly enervating encounters, especially given the present save system.

The save system incorporates autosaving. That’s fairly standard across the medium. The problem comes with an item in the game called Savior Schnapps. This item lets you save whenever you want to. That’s right. If you want to save before calling it a night and you can’t recall the last time the game autosaved, you better hope you have a Savior Schnapps handy. Without the item, you’re at the mercy of the autosave system. Again, I’ve seen some diehard players defend this choice, saying it adds tension and realism. Enough people agree with me that this is too inconvenient a feature, and Warhorse Studios has announced it would be altering this in the future. 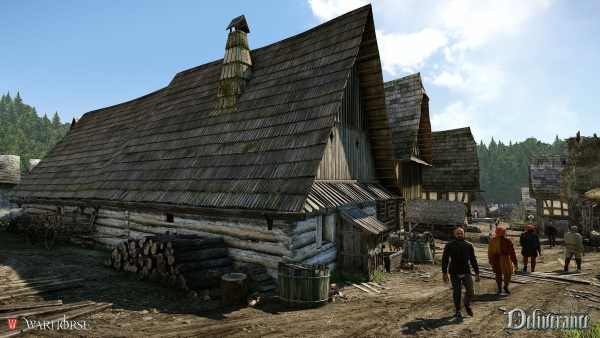 Kingdom Come is a great looking game. Animation is smooth, textures are sharp, and the models look true to life. The environment design feels realistic and lived-in, too. It also features good sound design, with a great adaptive soundtrack and, for the most part, well done voice acting. Some of the VO work is fairly weak, with a few Bohemian citizens that sound American. (It’s like those voice actors didn’t even try the British accent the rest of the cast supported). 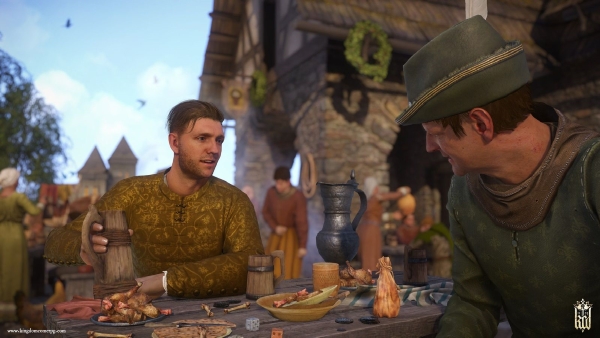 When it’s all said and done, Kingdom Come is a game that will earn a spot in the hearts of players for years to come. The game looks fantastic, the voice acting is (mostly) well done, and the storytelling and characterization are top-notch. Henry is a character you’ll come to love and relate to like few game protagonists. The gameplay is fun, though some of the survival mechanics and lack of free saving are arguably unnecessary and frustrating. At the end of the day, if you’re willing to put in a little time to learn the game’s mechanics, you’ll be well rewarded for your time in Bohemia.

Kingdom Come: Deliverance is a fun open-world game with great characters and an expertly delivered story. It has a few mechanics that may turn players off, but they become manageable with a little effort.