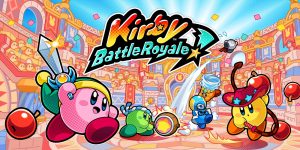 Everyone’s favorite pink fluffy blob is back in an all new adventure. Kirby returns once more to what seems to be the latest trend of Kirby spinoffs. With the most recent Kirby game being Kirby’s Blowout Blast, these releases feel short and sweet as of late. Kirby: Planet Robobot is the latest “full” Kirby game, which was released back in June 2016. Robobot sold more than a million units worldwide as of March 2017. Kirby continues to sell well, albeit its latest games being rather small. Battle Royale was received with mixed feelings, only selling less than 30,000 copies in its first week. In the wake of the next Kirby game being released in March (yes, in 2018), does Battle Royale serve us up a delightful Kirby experience, or does it fall flat? 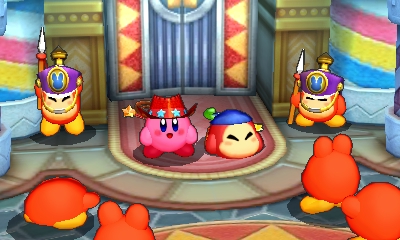 Kirby: The only one always awake, yet sleeps the most…maybe we should all take a lesson from him…

Violence: The most violent thing you’ll see is various Kirbys being knocked out and they rise up briefly with a halo around their heads. They disappear, but then appear again moments later. All the violence is cartoon with no blood. Imagine little globs of goo hitting each other with batons—it’s simple and guarded for younger audiences, just a little more flashy. 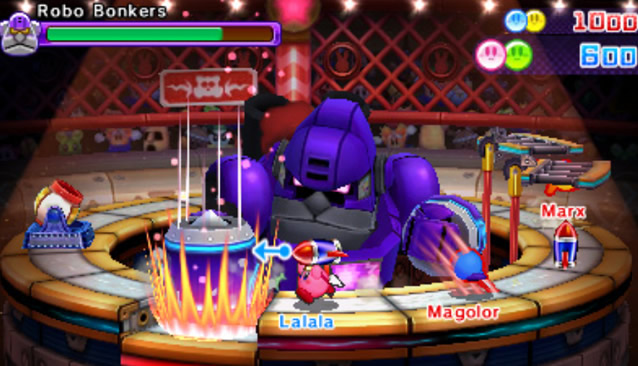 Robo Bonkers battles are easily the ones that drag on the most and are unnecessarily long.

Ever since the first game, Kirby has delighted and provided fans with fun little adventures. Some have been hard, some easy, and others just flat-out weird. Battle Royale brings us to a mix of multiplayer fun while providing fan service. With 10 games to play and 15 copy abilities to choose from, one can spend a good amount of time just on trying out all of the games. But the greatest challenge is the story mode, providing some of the hardest and most annoying battles you will face. If you’re quick to learn and familiar with past Kirby games, you’ll still have a hard time, but a better chance at overcoming them. 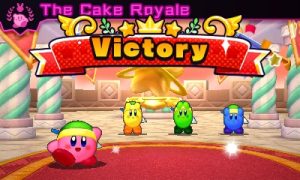 Most Kirby games have always contained some form of a mini-game, which some would argue is one of the best parts of any Kirby game. The mini-games are meant to distract from the main adventure and provide enough fresh spontaneity to keep the game interesting. Kirby Battle Royale is a game solely about mini-games. Most of them revolve around the ability to pick up and throw an object, but some rely more on the ability to attack and the advantage it gives you over your enemies. 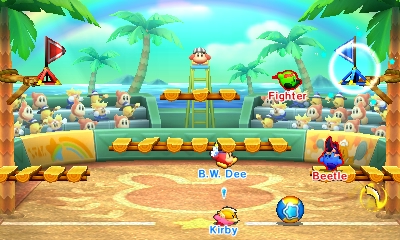 Flag Ball! One of my favorites!

Some of my favorite mini-games among the rabble are Flag Ball and Slam Hockey. Flag Ball consists of picking up a ball and throwing at your color flag. The catch is that players can pick up flags, so it can be quite challenging considering how sly your opponent is. Slam Hockey is similar, only you must hit your enemies by slamming a hockey puck into them. You can catch it before it slams into you, but you have to be quick! Honestly, these games are fun enough to distract for a short while, but won’t keep your attention for long.

Another great game is Crazy Theater which is really a bunch of small, quick mini-games in one. The objective is to complete each challenge presented as quickly as possible while stopping your enemies from also completing them. Win by completing 10 challenges first. Some include dodging lightning bolts or holding three apples while avoiding being hit. It can be challenging, again, depending on how sly and quick-witted your opponent is.

The mini-games are easy enough to pick up quickly which I think is something that Kirby games accomplish time and time again. Only with this game, it’s easy to pick up, but the amount of fun you have depends on your opponents. Playing against CPUs can be predictive and boring. Once you play with other human players, it becomes all the more fun. One of the features I love about the 3DS is its Download Play application which allows another player who does not own the game to join in on the fun. This allows you to play locally with another 3DS owner and it’sa great way to play with a friend or sibling without having to buy the game twice. 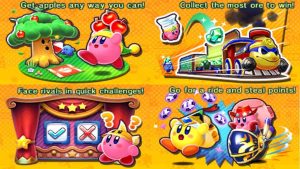 Lots of cool mini-games to play through. The game deserves credit for being creative and easy to pick up.

Thirteen abilities are available to Kirby, with only one—the Sword ability—being available at first. One must play through the Story Mode to unlock the others, which is reasonable and gives cause to play it. The best abilities by far are the Spear, the Whip and the Hammer. The Spear allows for projectile throwing and long reach attacks. The Whip seems a bit overpowered since it allows you to instantly grab an enemy from a long reach. But to make up for it, it has low melee attack power. It’s perfect for grab-and-throw mini-games. But the Hammer is the most amusing with the ability to attack with a massive hammer slam and a hammer throw. It also has a swinging move, hitting everyone around you. 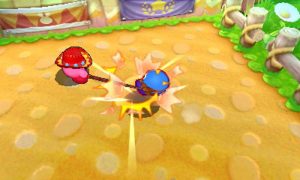 Every ability has a charged attack, but it takes time to charge it up. Simply hold down the B button to charge it and release. The problem is that if you’re hit while charging, it’ll cancel the move. There are boost orbs that one can equip before battles to aid with charging up which are, again, only unlocked via story mode. In other words, get that story mode done! Boost orbs are great and allow for perks during battle, such as speed boosts, healing items, and shorter charge times.

The music of Kirby is as memorable as ever, with a few themes coming back in different styles. First of all, the preparation theme is catchy and includes a few themes you might otherwise recognize from older Kirby games. King Dedede’s theme is quite familiar, but in a new, slower style that is still classic as ever. I really liked the music in this game, but play any number of the games and the music always stands out, despite themes being used again and again. 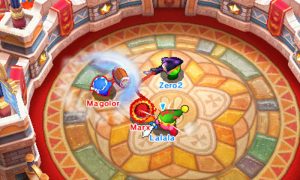 Overall, Kirby Battle Royale is a great multi-player game that is good for probably less than 10 hours of complete fun. Worth its price tag? No, not really. It would make more sense being at a twenty dollar price tag. The fact that it’s over-priced could be its downfall and may receive a pass from Nintendo and Kirby fans alike. If you’re looking for some Kirby multi-player, save yourself some money, whip out your Nintendo 64 or Wii and play an older title. Even though this game includes online multiplayer, it’s simply too expensive for what you get. Having said that, Kirby Star Allies—coming soon on the Nintendo Switch—looks to be a good game and I will expect much better things with the price tag it comes with. 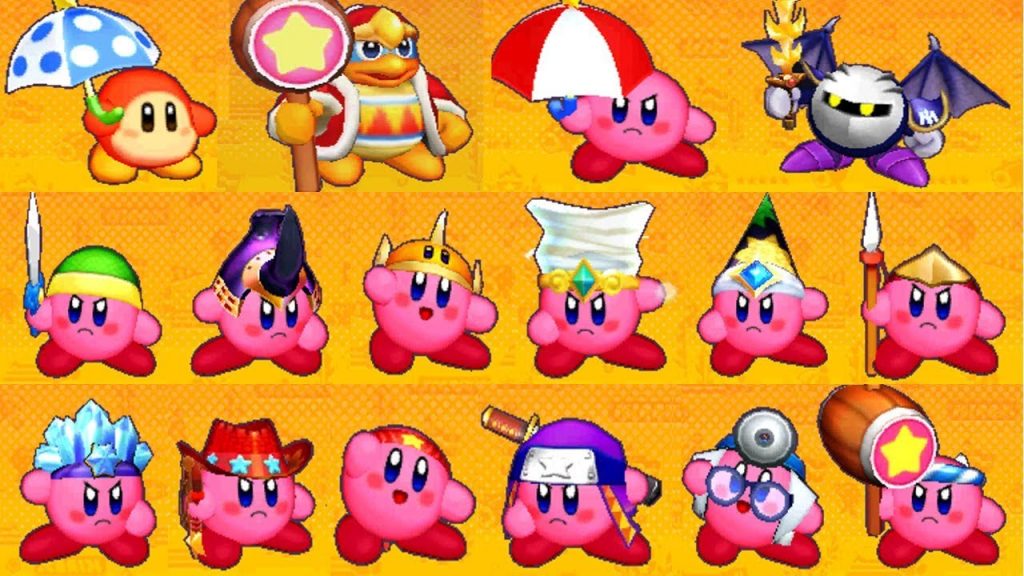 Here are all the possible powers to choose from. (Yes, you can play as Dedede and Meta Knight)