As soon as I saw the trailer for Later Alligator, I got excited. It looked like my kind of game in every aspect: the cartoony art style, the hyper-specific humor, the point-and-click exploration…every element was there. And thankfully, I wasn’t disappointed! This charming game made me laugh out loud at every turn, and I’m sure it won’t be long before I pick it back up. 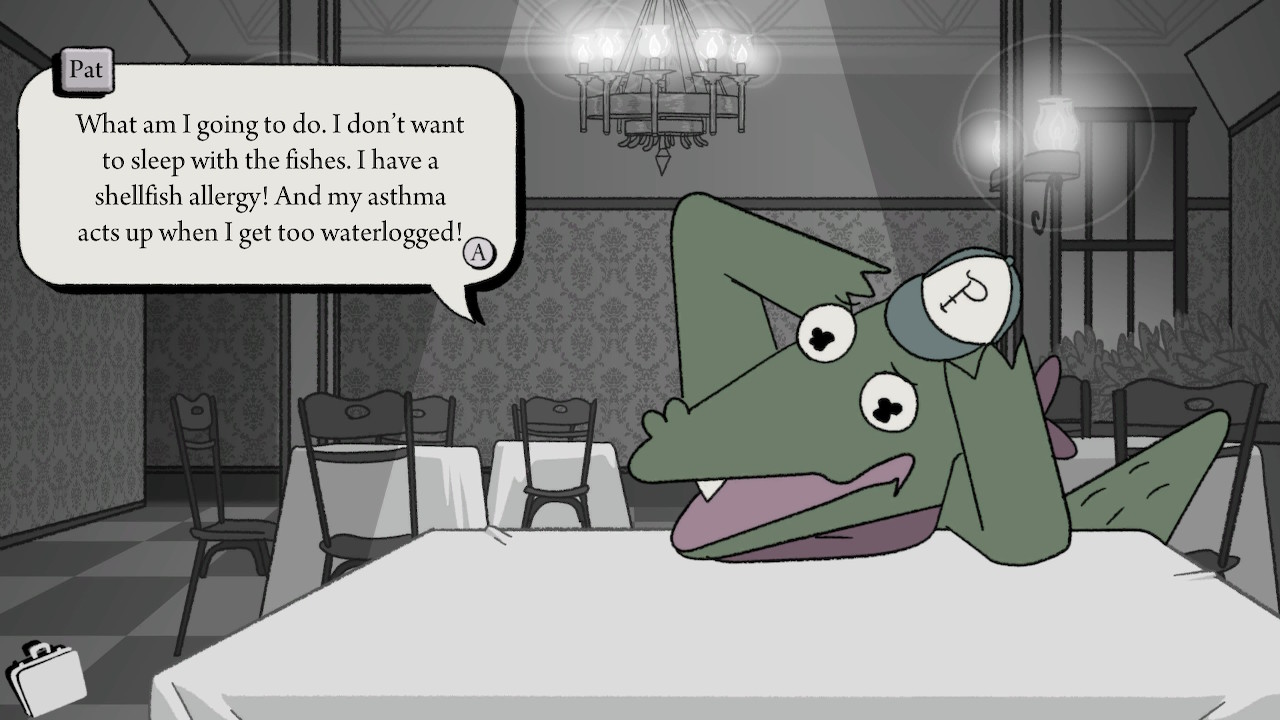 Spiritual Content: There are far more spiritual and supernatural elements littered throughout the game than I expected. Noteworthy mini-games include: exorcising ghosts from a phone, protecting a baby from being possessed by ghosts, looking for shoes in a haunted chest of drawers, using an ouija board, getting a tarot card reading, and blocking out distractions so a new-age character can reach some sort of enlightenment.

There’s also a location called “Nana Rue’s Antique Shop” which is haunted. Ghosts appear here and in other parts of the game as quick gags. You receive the family member badge of a character who’s a ghost upon completing the ouija board mini-game. Although, as with almost everything, these mini-games, locations, and other references are primarily played for laughs. The instance that came across the most “serious” to me was the tarot card reading, but even that had comedic elements to it.

Violence: Besides Pat believing his family is going to kill him, two twins and their mother allude to poisoning their father/husband. This is treated as an offhand joke. In the haunted drawer mini-game, some of the drawers’ contents include blood, an eyeball, and other spooky or violent objects. The player occasionally has violence threatened against them, but it’s always comedic. Additionally, two of the endings involve the player committing an act of violence (I can’t go into more detail without spoiling them). 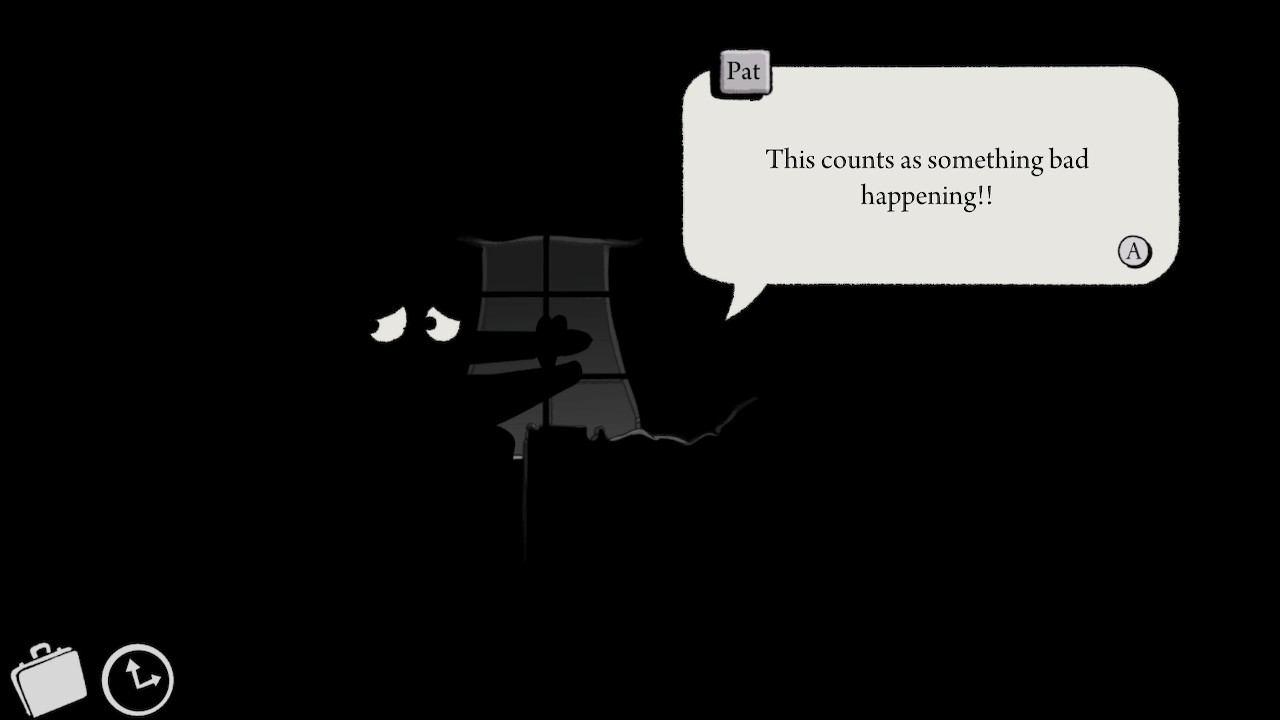 Language/Crude Humor: There’s no bad language besides some “dangs” and “hecks.” Arguably, most of the humor could qualify as crude, with joke topics ranging anywhere from health conditions to death.

Sexual Content: There are two homosexual characters in a relationship and another character who may be bisexual (you go on a mock date with this character in a mini-game). However, these are subtle and minor details that don’t have any real bearing on the story. In the “Unsavory Part of Town,” you can enter a location with a neon sign outside saying “GIRLS GIRLS GIRLS.” This is just a quick gag since, once you enter the location, you see it’s nothing more than a club that learns about and discusses female historical figures.

Drug/Alcohol Use: One location is called “Very Adult Bar” and multiple characters (including one who appears to be a child) are seen with alcoholic drinks, though no characters are shown drunk. A character is seen smoking outside of this bar. 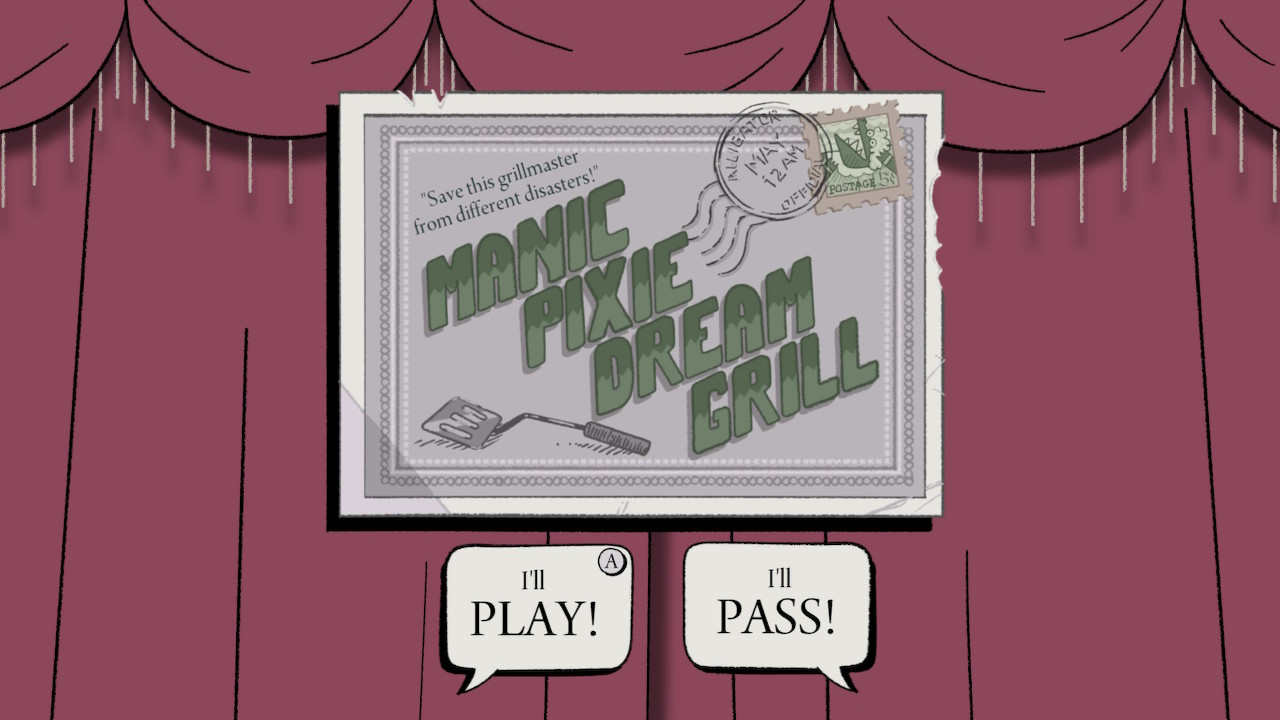 Other Negative Themes: One young character’s distinguishing trait is that he’s neglected by his family. His neglect is over-the-top and, again, played for laughs. However, it could be triggering for some players who’ve experienced neglect.

Positive Themes: Most mini-games revolve around helping or doing kind things for the family members, such as playing hide-and-seek with a lonely kid or fixing a dad’s grill. After interacting enough times with a character who’s smoking, people nearby will discourage their actions, saying smoking is “not cool.” Two of the three endings have happy outcomes. 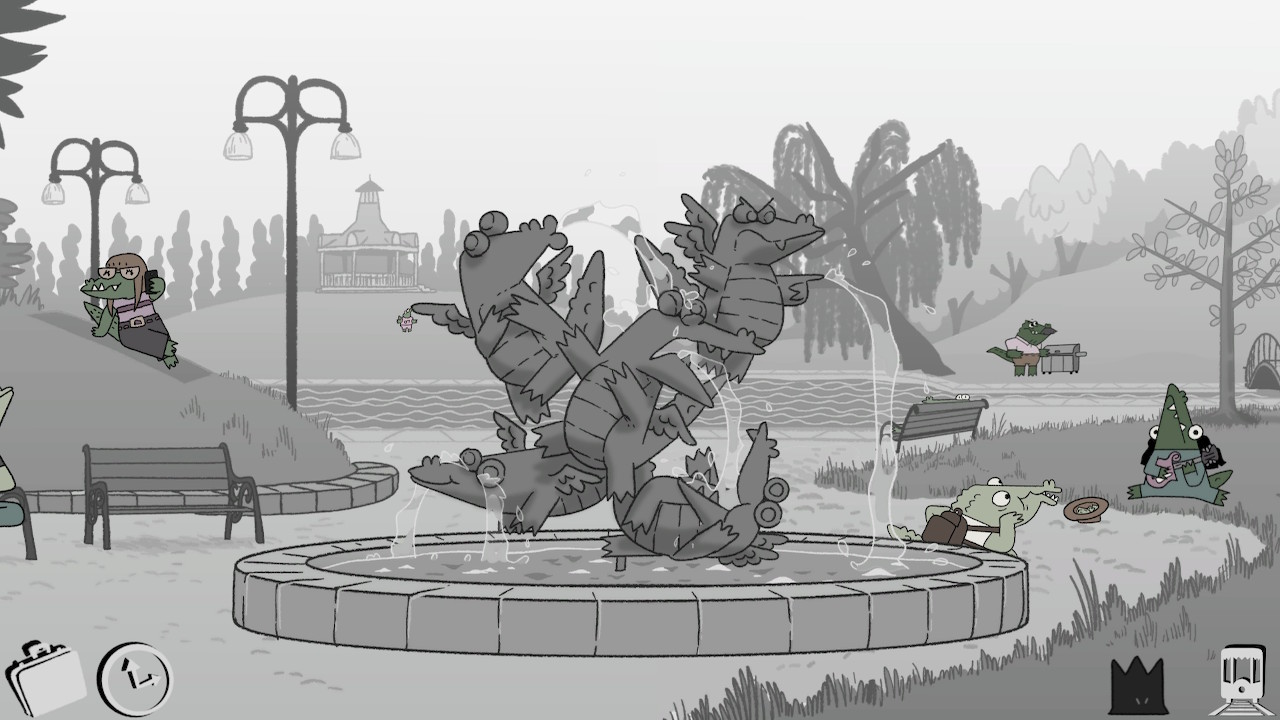 In this game, you play as a mysterious investigator who has been hired by an anxious, lovable alligator named Pat. It’s his birthday, but he’s convinced that his large mafia-esque family is going to put him six feet under at tonight’s “event.” So, he wants you to ask around and find out what exactly this “event” is. And with that basic premise in place, out you go onto the streets of Alligator New York City!

From then on, the game is a point-and-click adventure where you challenge each family member at their respective mini-games in exchange for information and family member badges. The badges are used to unlock different endings, and you can use them to assemble Pat’s family tree. The key to constructing this tree is remembering how each gator is related to the next! Of course, you could always go back and re-ask the family members if you get stuck, but I had a lot of fun keeping a list of each character’s name and relation to Pat. While this is a fun tidbit, it’s a minor gameplay element compared to the mini-games themselves.

For the most part, these are pretty typical clones of existing games, such as memory games, pinball, or Flappy Bird. Although, there are some delightfully original examples, like letting a kid beat you at hide-and-seek or playing a mini dating sim. Besides these, the other main gameplay element is curiously clicking around to find puzzle pieces. While these are technically optional, you need at least some to find certain characters so you can unlock more endings. 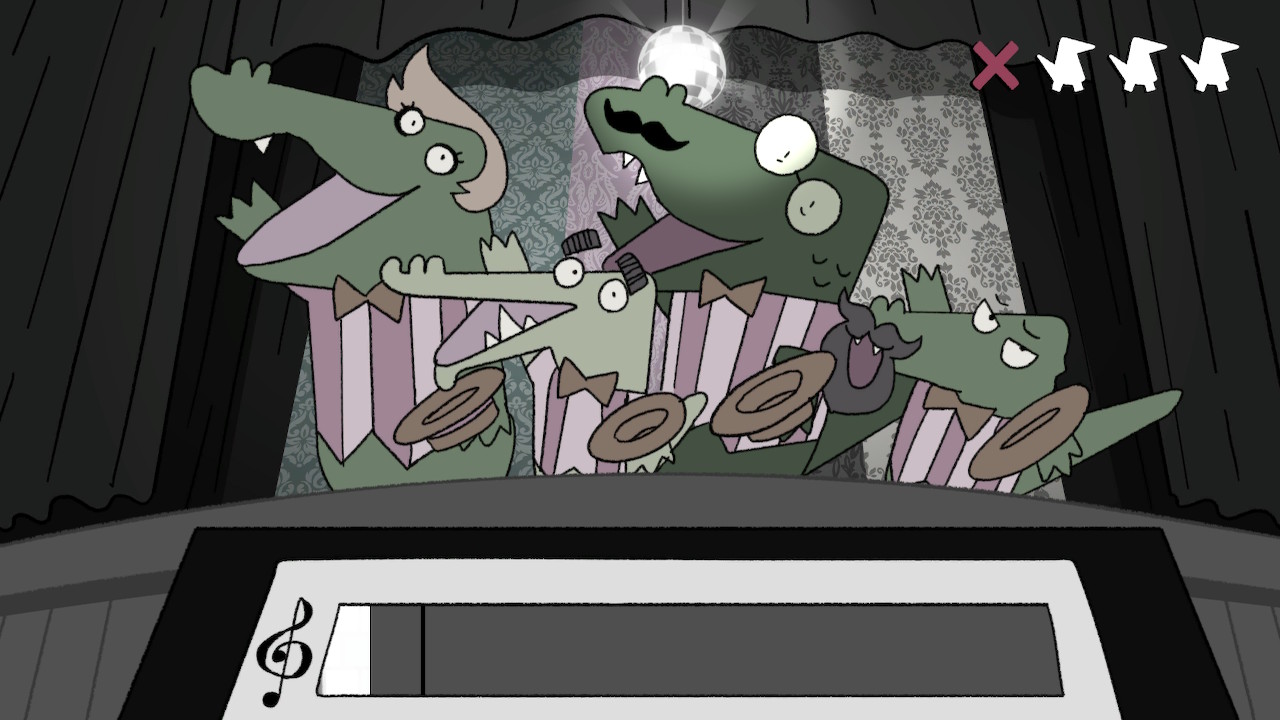 Unfortunately, this process is made more difficult by a small yet oh-so annoying detail: very sensitive joystick controls (it’s worth noting that the game was first released on PC, so it was designed to be played with a mouse). Initially, this doesn’t seem like that big of an issue, but it makes a difference when you’re trying to find puzzle pieces and play some mini-games. There was at least one occasion where I lost a mini-game because it was too difficult to aim. I felt this even more with the puzzle pieces since most of them have pretty small hitboxes, meaning I’d have to fiddle for a minute before I could interact with them. At the end of the day, these sensitivity issues don’t make the game unplayable by any means, but I wish I could adjust this in the settings.

Another minor annoyance is the “last” mini-game in the story, which consists of navigating a pitch-black maze that’s lit only by your flashlight. And this is all well-and-good for the first playthrough, but it becomes a hassle if, and when, you decide to replay the game to unlock more endings. The strangest part is that you can skip all other Pat-centric mini-games in subsequent playthroughs except this one. Again, this isn’t the end of the world, just a little inconvenient. And I’m more than willing to sit through these inconveniences thanks to the music, visuals, and humor.

These are easily my favorite aspects of the game, and it feels like they’re the developer’s favorites too. The jazzy tunes perfectly fit the gangster movie/investigative vibe, and I constantly have different tracks stuck in my head. To my surprise, some of the songs even have fun, alligator-themed lyrics, which is a nice touch. Still, the music is a mere backdrop to the game’s strong visual style. It similarly borrows from gangster movies and film noir, using a black-and-white color palette for everything except the characters and some select objects. This, in combination with the crisp cartoon aesthetic, makes the game a joy to just sit back and look at. 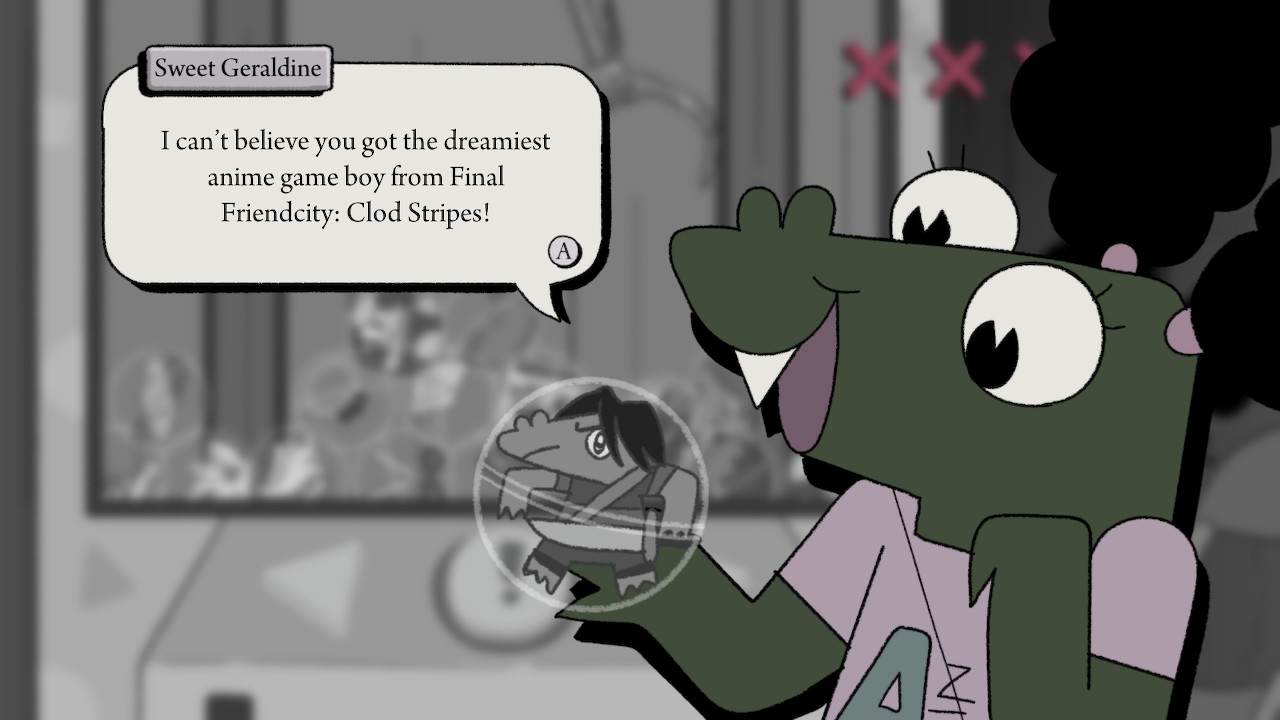 But the real heart and soul comes from the humor. I’m a sucker for these kinds of hyper-specific, existential jokes, as well as the steady stream of references and parodies, though it may have been the latter that got me in hysterics more often, with some deep-cutting anime and game references that I was not at all expecting. A good comic doesn’t steal jokes, so I’ll refrain from reciting any of them. Just know you’re in for a treat (especially if you’re a pop-culture fan). But speaking of the unexpected, I want to quickly touch on the multiple endings before I close.

There are three possible endings (according to this post in the game’s Steam discussions): the one you get for simply completing the game, the one which comes from replaying the game without getting all of the family member badges, and the one you get by replaying the game and getting all of the badges. Having gotten all of these endings, I can say I was genuinely surprised by the last two. Of course, I won’t spoil them here, but they’re absolutely worth replaying to get. As of writing this, I have three puzzle pieces left to find and, according to that same Steam discussion post, you get a “neat reward” in return for finding them all. However, they don’t have a direct bearing on the endings.

All in all, Later Alligator is a wonderful little game that’s filled to the brim with clever jokes and thoughtful details that are sure to put a smile on your face. Not to mention, it’s all perfectly tied together by its rich music and visuals. It suffers from some minor gameplay annoyances, but these negatives are far outweighed by its positives. And if those positives sound like a winning combination to you, I sincerely hope you check out this title!

Later Alligator is a hilarious adventure game whose strong visuals and music tie it together into a lovely little package.