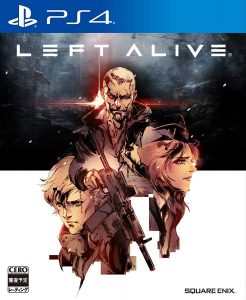 Games that intrigue me most are those that let the player experience tension and desperation. Left Alive sets the player in the middle of a war zone, trapping the player on the losing side of the conflict. The war zone of Left Alive seems like it would be a great place for a stealth game, where the player must rely on wits and cunning in order to stay alive against a superior force. Left Alive promises challenging stealth gameplay and tense action, but it fails at this because of the weak enemy AI and lackluster storyline. 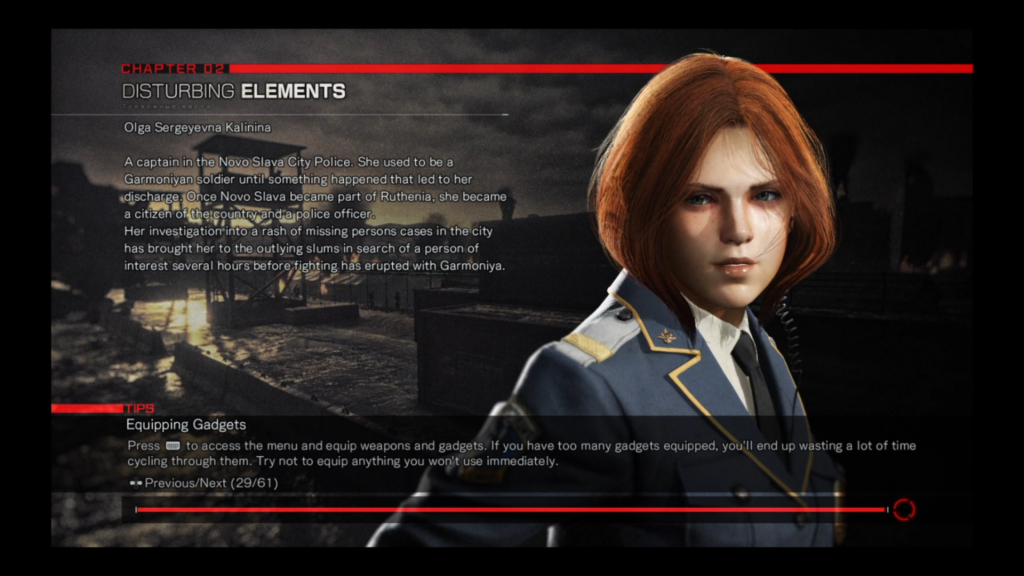 Left Alive is rated M for Mature. The game is set in a war zone in a fictional eastern European country which means that there are plenty of corpses everywhere the player looks. None of the bodies are very gruesome—most are slumped or laying against a blood-stained wall with a puddle of blood near the body. There are brutal cutscenes that show enemy soldiers lining up civilians and shooting them, but the camera cuts away before the shots are fired. The player can use guns, explosives, and blunt objects to kill enemy soldiers which results in a cloud of red mist when the soldiers are hit. I would not recommend this game to young kids due to scenes of brutality in the war zone.

Left Alive is the latest game set in the Front Mission series of games. The Front Mission universe is a near future fictional world in which armies have developed bipedal mechs called Wanzers. The gameplay in the Front Mission series, until Left Alive, was mech combat. Left Alive, on the other hand, is a third person stealth game similar to Metal Gear Solid with little mech combat in certain sections. The game’s storylines center around Wanzer pilot Mikhail Shuvalov, police officer Olga Kalinina, and escaped criminal Leonid Osterman. Storylines are divided into chapters which intermingle throughout the game, and the characters alternate in each chapter. 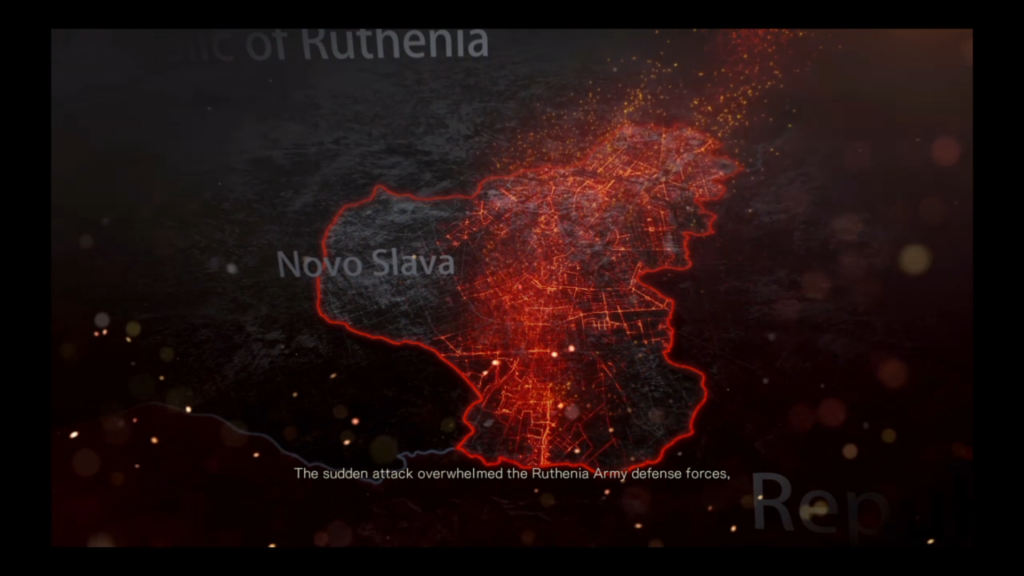 The game is set in the city of Novo Slava, which is a border city between the Republics of Ruthenia and Garmoniya. At the beginning of the game, the Garmoniyan army invades Novo Slava. The reason for the invasion is not clear at first, but is revealed later through the storyline. One of the first weaknesses that I saw with the game was that there was little to no tension buildup before the invasion or afterward. Left Alive opens with a cutscene consisting of a female voice leaving a message for her husband, the image on the screen showing a bloody smartphone lying in the snow. After this, a montage of invasion cutscenes roll by until the game stops at the title screen; there is no sense of tension or any background about events leading up to the invasion.

I never really had a sense that there was any tension, because I was unaware of why Garmoniya invaded Ruthenia. There was no clear picture of the ethnic tension between both countries. The first few missions revolve around Mikhail, whose wanzer is damaged, leaving him stranded in Novo Slava. Mikhail is forced to sneak through the city avoiding enemy soldiers in order to find a way out of the war zone. There is little to no back story about Mikhail or any of the other characters that the player can control. I found it hard to care about the characters because the story never fleshed them out. 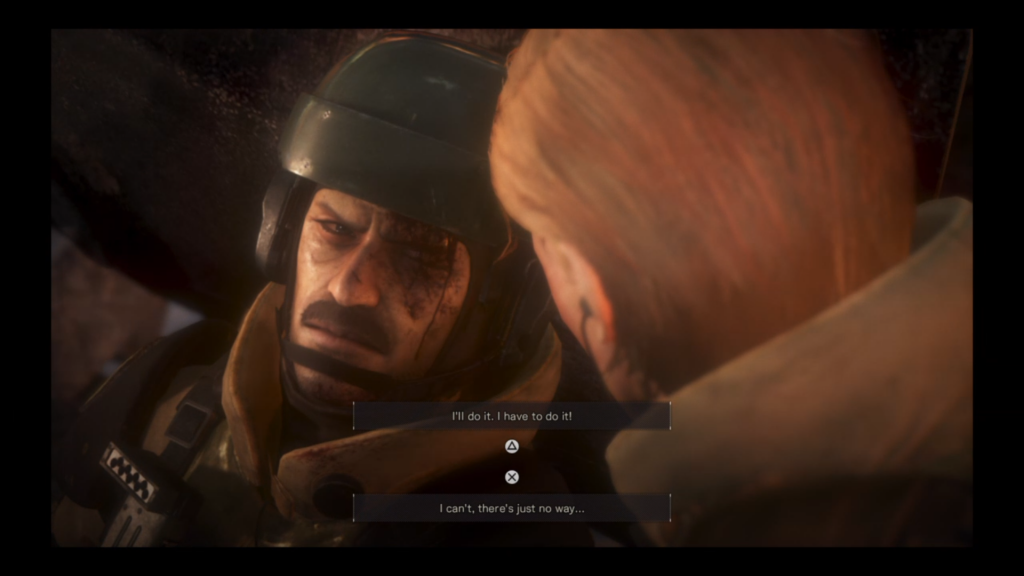 I continued to find the characters hard to relate to, especially after hearing their dialogue. Most of the dialogue consists of expositional statements said between characters that don’t really feel like a conversation. The game gives the player dialogue choices in certain scenes, but I found that despite the choice I made, it did not influence the outcome of the scene. An early example of this is when Mikhail encounters an injured commander. As he is talking to the commander, an enemy NPC comes along and starts talking in baseball metaphors and threatening to shoot Mikhail. I chose every dialogue option that would likely anger the NPC, but he said that I was not worth it and walked away.  I died and ran through the scene again making different choices, but the scene always ends the same way. I was never told who the NPC was, or if he had any history with Mikhail—it felt like he did, but it wasn’t clear based on the scene. 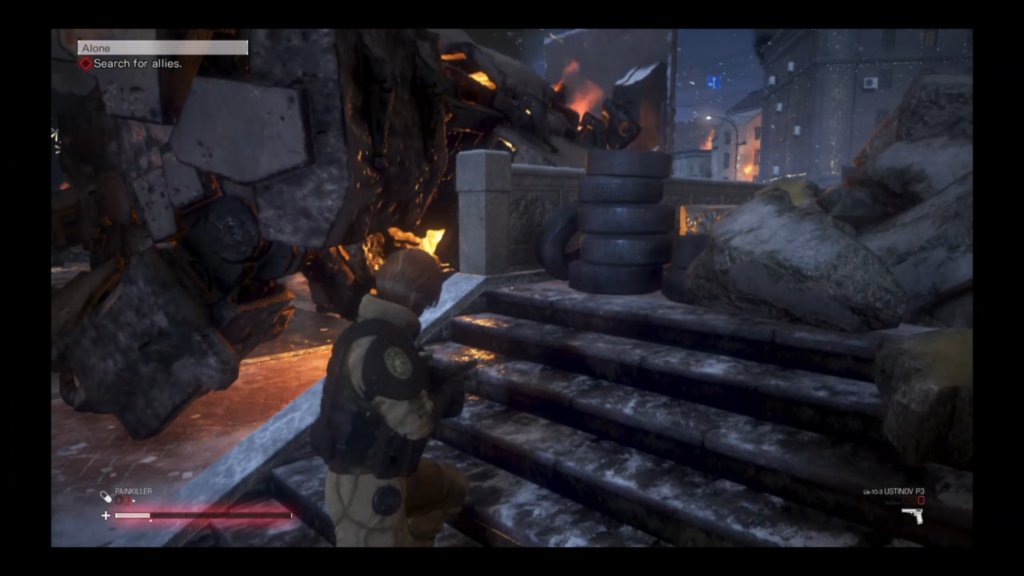 At the start of the game, Mikhail is stranded with nothing more than his pistol after his wanzer is destroyed. There are numerous heavily armed soldiers and wanzers throughout the city which means Mikhail needs some way to fight the superior force. The answer to this is crafting homemade explosions, Molotov cocktails, and other traps to level the playing field. This crafting concept fits well with the stealth game. By using the right traps or items the player can lure and kill the soldiers without having to resort to open combat. The same crafting system is used by all the characters in the game, but each character has a limited amount of weight they can carry.  I found that I needed to juggle items constantly in order to have supplies to craft with and weapons for combat. 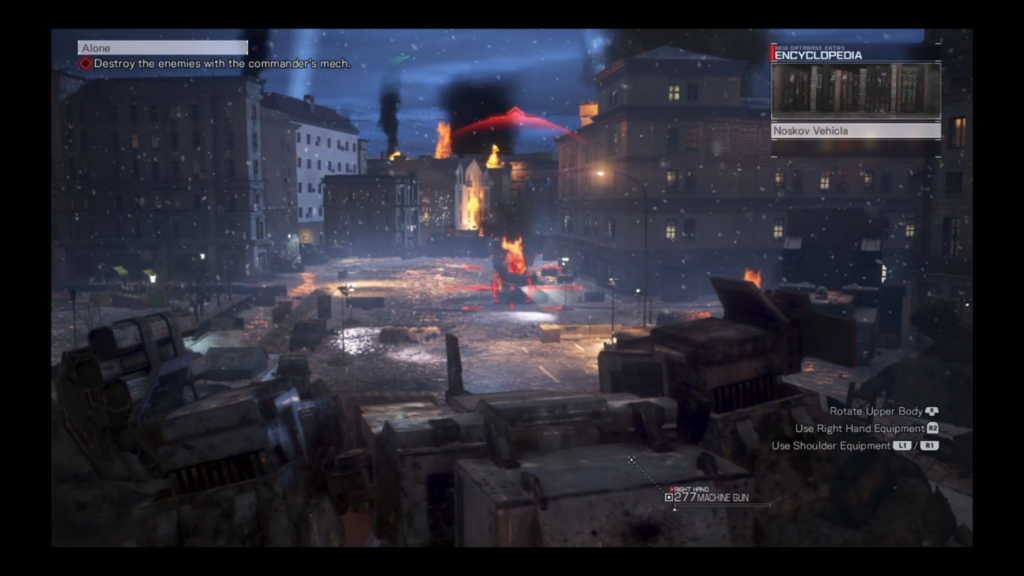 The second weakness I found was the broken AI, which makes the game frustrating. The AI was never consistent at any point in the game. Soldiers would ignore my character at times when I was walking right by them, but at other times, they would see me sneaking from a couple of hundred yards away. The most frustrating interaction with the AI was the alert parameters. I was uncertain what would alert the enemy AI and what would not. I was the most frustrated with the first mission involving Olga, set in the city’s slums. 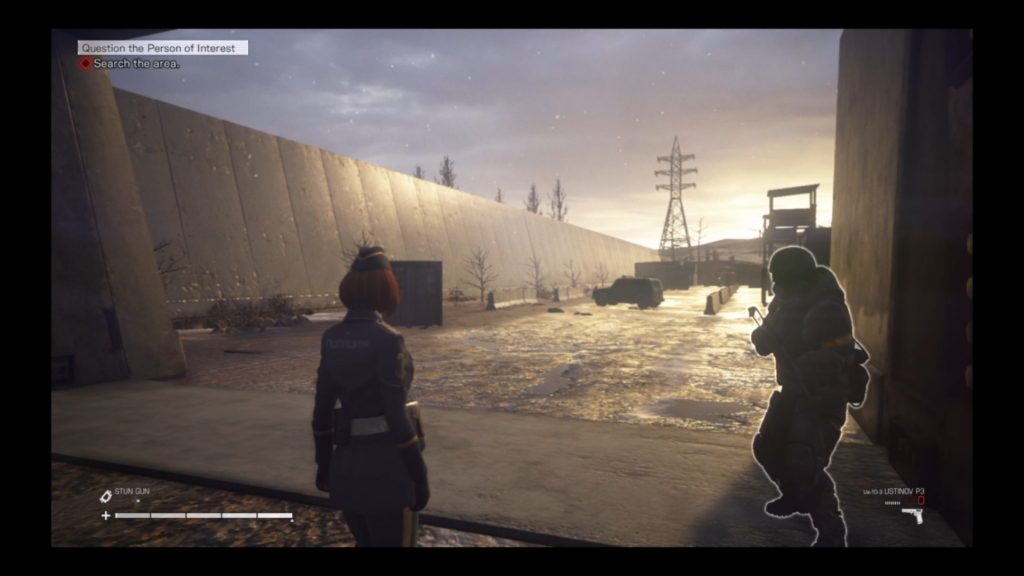 Most of the slums are brick buildings with open areas in between. There are soldiers, drones, and wanzers patrolling the area. I found that I would alert every soldier and drone in a hundred-yard radius if I attacked a soldier with a quiet blunt weapon attack. I wouldn’t alert anyone if I used an explosive or some other kind of trap in the same situation. When the enemies were alerted, they never behaved consistently; some of them would run by me going to the area where I had been seen while others would stop and fire at me. The one thing that was always consistent was the AI’s pinpoint accuracy. Anytime the AI was alerted to my character, they would quickly gun me down from anywhere, no matter the distance. Enemy soldiers would drop out of the sky or ceiling randomly, which was confusing until I figured out that some soldiers would run to my position and jump. They can move through walls or anything in between us when they jump, which is why they appeared to come out of the sky and ceiling.

The hours that I spent playing Left Alive were frustrating because of the broken AI. These hours were also not visually appealing either, because the graphics of the game are dark and bland. Left Alive takes place in a city made up of buildings with only a few colors and brick patterns. The slums were also very uniform and the areas in between buildings consisted of brown mud with no variation other than various piles of debris. Overall, Left Alive is a game that I had hoped would be an interesting stealth game, but it was dragged down by the broken AI, weak storyline, and drab visuals.

Left Alive promises stealth gameplay much like Metal Gear Solid, but it fails to deliver because of broken AI, weak storyline, and poor graphics.