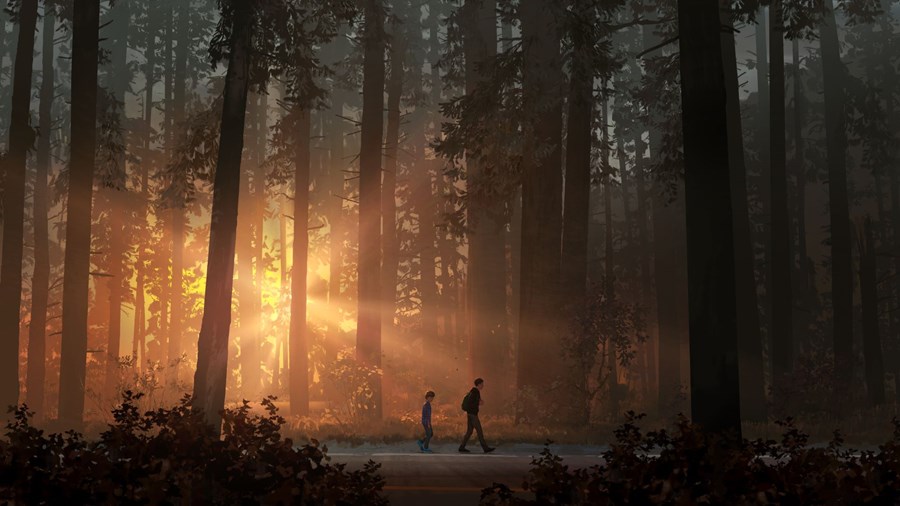 After playing the whirlwind of emotions (no pun intended) that was the first season of Life Is Strange, I was eager for more experiences in or around the game’s location of Arcadia Bay. While the sequel is still set in Seattle, Arcadia Bay has become a bit of an afterthought. Season 2 stars brothers Sean and Daniel Diaz, who are forced to run away from their home in Seattle after a tragic incident involving their father and their racist next door neighbor. Pursued by the police, Sean & Daniel head to Mexico while attempting to conceal Daniel’s sudden and surprising supernatural power. Life is Strange 2 is finally here, and while it offers more of what I loved about Season 1, it also brought a lot of negatives to the overall plot and tone of the game which I feel may alienate a certain subset of players.

Spiritual Content: Just like with The Awesome Adventures of Captain Spirit, which sets up the events and story of Life is Strange 2, religion is mentioned only passively, often in ways that seem to indicate a disdain or lack of understanding of religion in general. However, I don’t believe this is done out of any ill-intent, but out of character (or developer) ignorance as to what Christianity is actually like, posibly due lack of belief themselves. Supposedly, the choices made in Captain Spirit will have some kind of impact in LiS2. It remains to be seen if some of the hinted-at elements of Christianity are a way of overcoming alcoholism and other problems is explored further in future episodes.

Violence: Within just the first episode of LiS2, players will be exposed to a fist fight, a shooting, and a somewhat violent kidnapping. Needless to say, the game is already working overtime to earn that “M” rating.

Language: Just like with the LiS, the Before the Storm spin-off, and Captain Spirit, f-bombs and other expletives are used frequently. While some will find the language offensive and inappropriate at certain points, it does lend a sense of realism to the characters as actual teenagers do use that kind of language, especially in very troubling situations.

Drug Use: Characters in the game are seen smoking pot, cigarettes, drinking alcohol, and referencing other drugs as well. This is all based around the main character gathering “supplies” for a high school party.  However, you can choose to bring sodas, chips, and other less-harmful items as well.

Sexuality: Unsurprisingly, sexuality is another returning theme that was heavily explored in the first LiS game. When gathering supplies for the aforementioned party, main character Sean can choose to bring condoms along as well as he hopes to hook up with his high school crush at this party. Other allusions to teenage sex and additional taboo activities are mentioned in character text messages and social networking pages.

Other Questionable Content: The Life is Strange series is known for shedding light on some controversial  issues like child pornography, underage sex, drinking, drug use, gun violence (including in a school), suicide, and bullying. However, the portrayal of racism in LiS2 was not handled well, and to me seems like it would only alienate and divide the target audience more than it would rally them in the fight against racism and bigotry.

As much as it pains me to say it, LiS 2‘s first episode is just not as strong or impactful as the first game. The scene explaining how and when Max first discovers her powers is an emotional gut-punch that has yet to be replicated for me in LiS2. While terrible things happen to Sean and his younger brother Daniel in Episode 1, a lot of it seems to come from out of left field and often feels so over the top that I couldn’t find the same emotional investment I developed when playing through the first LiS. 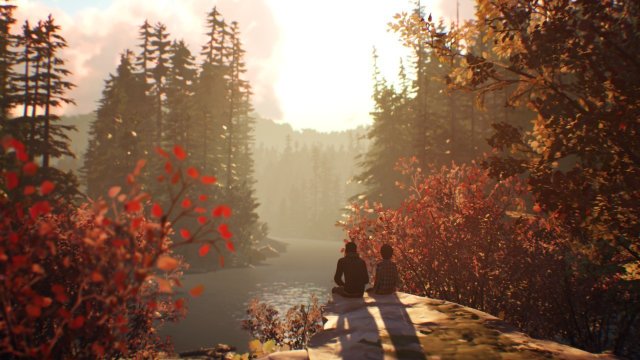 An example of this is the blatantly over the top and overly-simplified portrayals of racist characters in the game. Nearly all the Caucasian characters that Sean and Daniel come in to contact with throughout LiS 2 discriminate against them seemingly because of their Mexican heritage and/or darker complexion. I am not faulting the game for including these elements; the first LiS dealt with tough themes as well, including suicide, gun violence, date rape, and child pornography. I just feel that the developers haven’t put as much care or thought into exploring the actual reality of many of these situations in LiS 2. The gameplay is generally the same as Life is Strange but the gut-wrenching sense of realism from before is not present here. Up until the final episode of LiS, I felt that most of the scenarios and things that were happening were, for the most part, grounded in reality. The two exceptions being Max’s dream sequences towards the end and of course, her actual powers. In LiS 2, however, everything that happens seems like something out of a really cheesy indie-film, including an overtly racist and mustache-twirling villain. It just took me out of the experience completely.

In an attempt to avoid spoilers as much as possible, an early scenario depicts Sean defending his younger brother from their racist bully of a neighbor, Brett. This event is ultimately the catalyst for the ensuing tragedy that convinces the brothers that they should run away to Mexico. That part is fine, believable and grounded in reality. A later scenario, involving the manager of a gas station, feels so over the top and unrealistic that it almost made me want to stop right there without even completing the chapter. There is no way in 2018 that the events that happen at the convenience store would ever happen in real life. 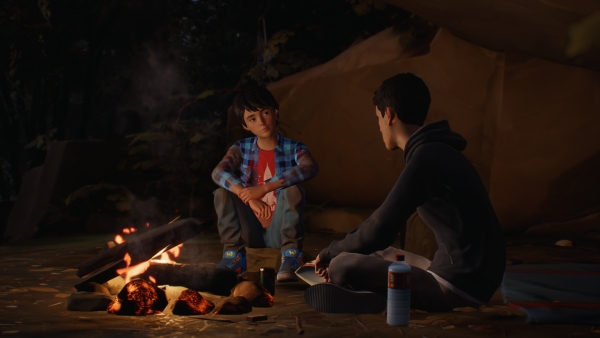 The journey the brothers go on is intriguing and I did enjoy the nature segments, especially when Sean finds quiet time to sketch in his notebook. This leads into an interesting mini-game where players have to use both thumb-sticks to draw the scene Sean is seeing. This time around collectibles are more than just photographs and consist of items like patches and keychains which can be adorned on Sean or Daniel’s backpack. This allows players to kind of customize their playthrough with something other than choices made in the story.

One stand out supporting character, Brody (who looks and sounds ALOT like Seth Rogen), voiced by newcomer Bolen Walker,  personally stole the show for me as the awkward, but lovable, hippie-blogger hero who helps the brothers escape the gas station encounter. I was genuinely sad to see him drive off at the end of the episode, but I feel like there is a strong chance he will return in the finale as his performance was so strong and his character so lovable I could see Dontnod including him in future episodes as his character seems important to the overall story.

It was also enjoyable getting to play the game and experience the world of LiS 2 through the eyes of a minority character as it allows players to see life from a different perspective and get an idea of the oppression and unequal treatment that minorities experience on a daily basis. I just wish that the portrayals of the racism Sean and Daniel face in their journey was handled a bit better in this episode. It is clear what the developers were trying to do by offering this new experience, but so far it hasn’t worked that well. 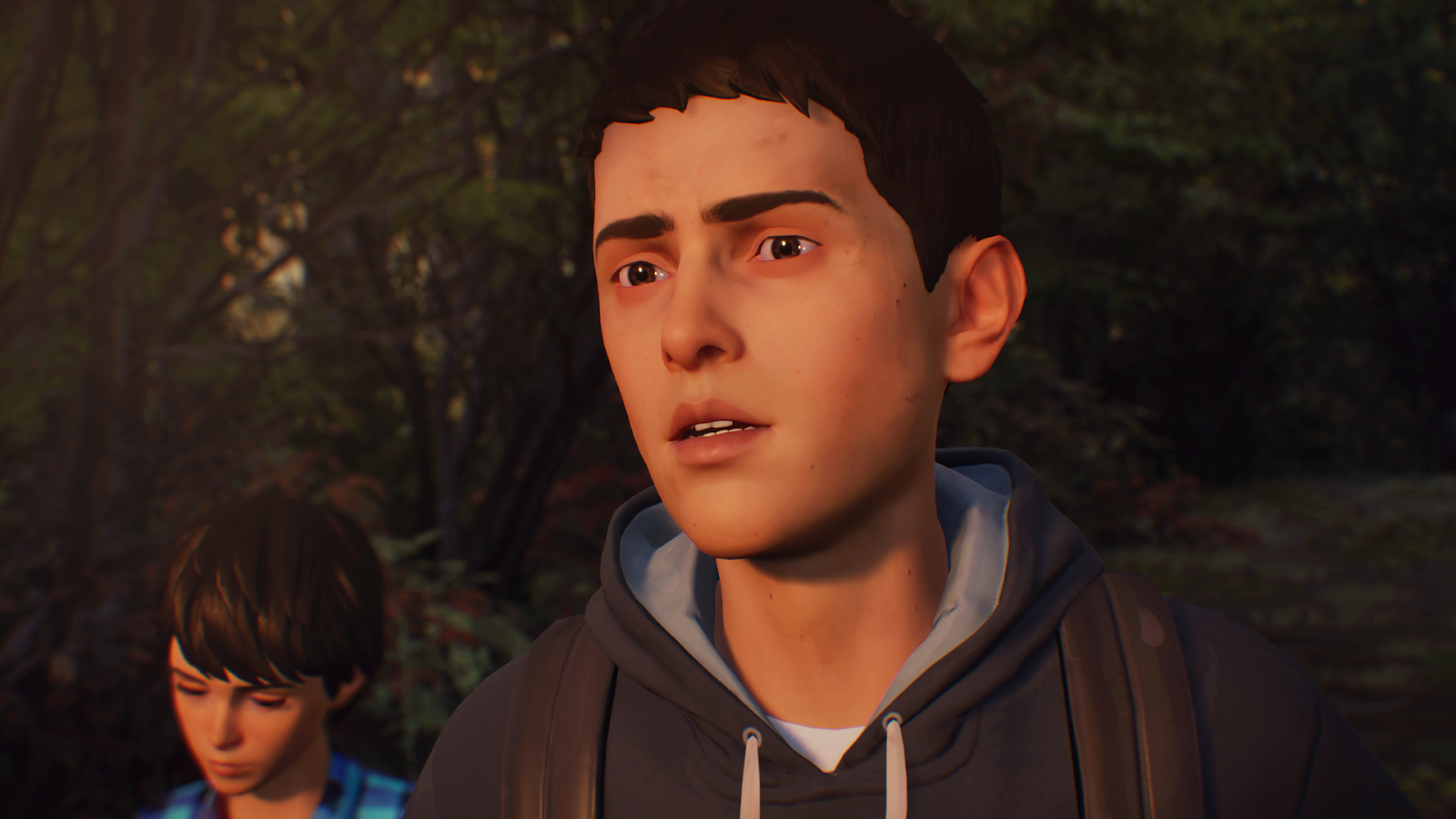 Overall, I recommend LiS2 to fans of Life is Strange as it offers more of the fantastic adventure gameplay with a touch of the supernatural. The post-credits stinger at the end of Episode 1 hints that players may be reintroduced to Chris from Captain Spirit in the next episode and appears to confirm that both boys at the end of that game were in fact Sean and Daniel Diaz. As disappointed as I was with the first episode of Life is Strange 2, I am eager to see how the team at Dontnod plans to tie together the stories of Sean and Daniel with Chris’ story from Captain Spirit.