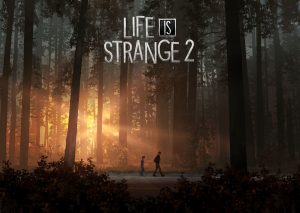 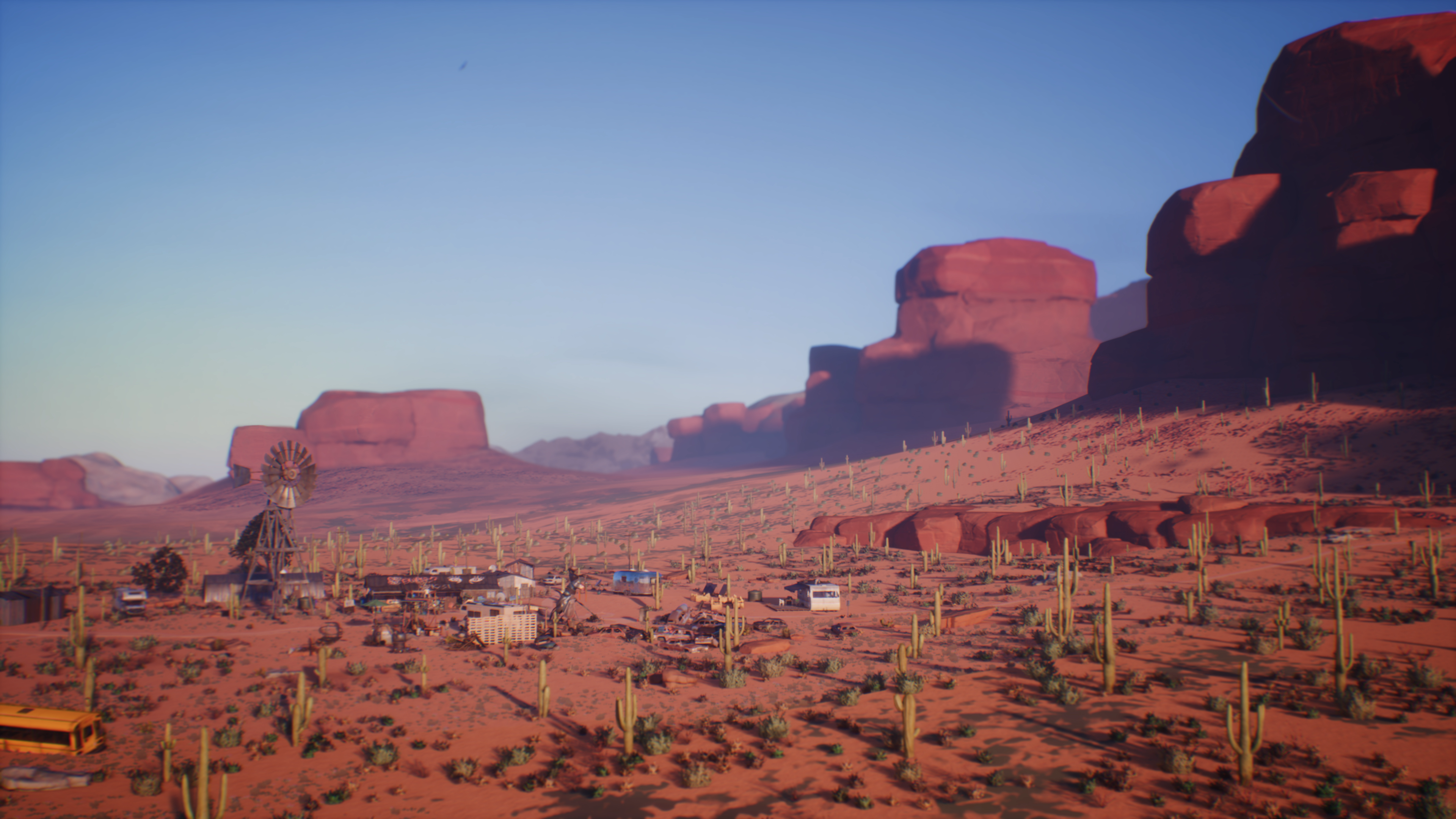 For the Diaz brothers, it has been a long and interesting journey leading into the finale of Life Is Strange 2. Since the tragic events following a key character’s death in Episode 1, the pair have made many new friends, and even some enemies along the way. While players won’t see many familiar faces as they close out their journey with this wolf pack, they will get to experience one of 7 different endings with each taking into account a myriad of choices made across all 5 episodes. With that kind of variation, LIS 2 is sure to be the topic of discussion for many fans in the coming months. 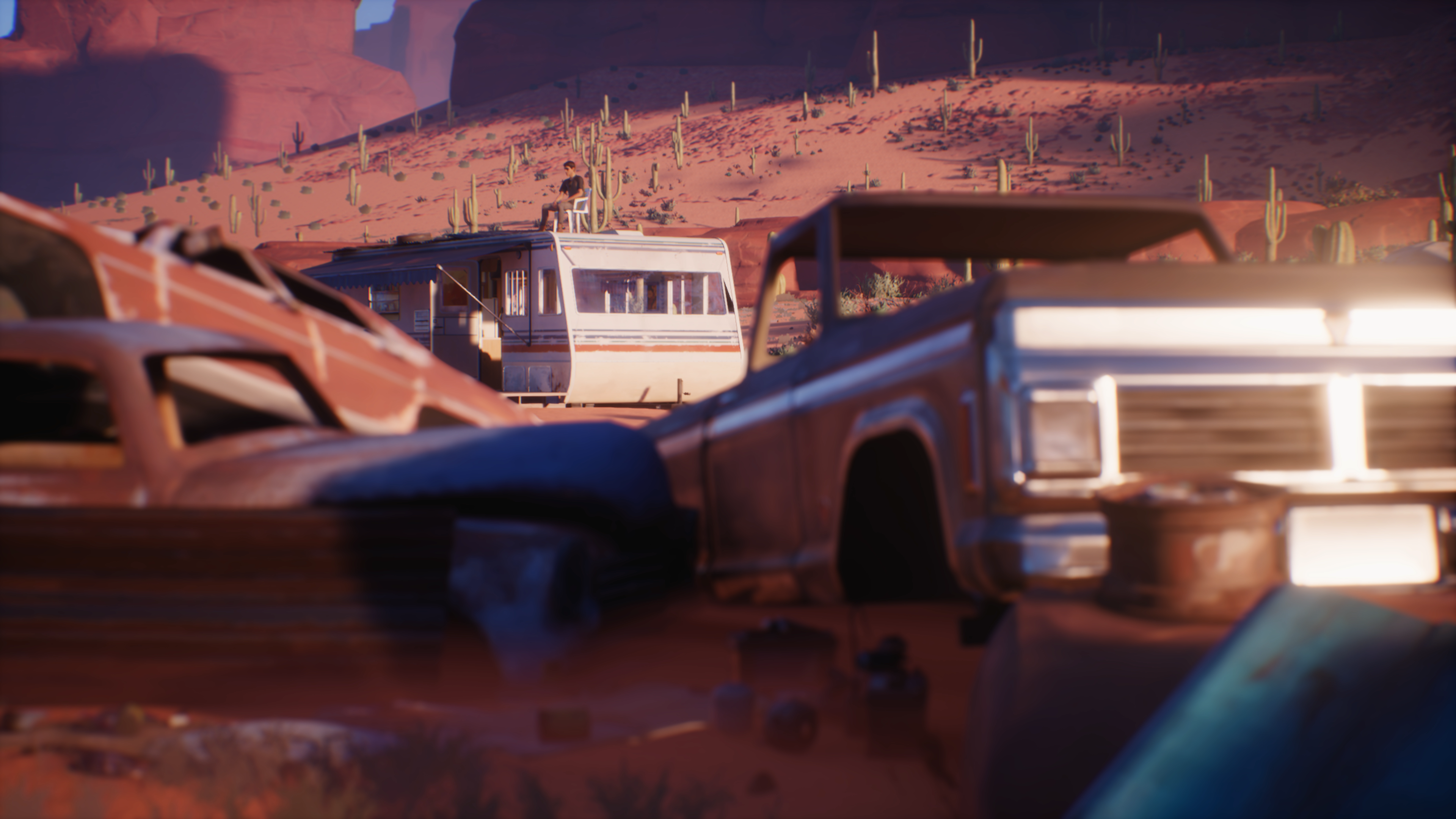 This episode explores many mature themes. While there is not a lot of drug use aside from smoking, there is blood, violence, many moments of peril, and some really tough scenarios that echo the struggles that millions of people face on both sides of the immigration issue. I feel that Dontnod does a great job of not being preachy with their message and they let the story and the choices that can be made in this episode speak for themselves so that what one takes away from this season as a whole is entirely dependent on the choices they made along the way. 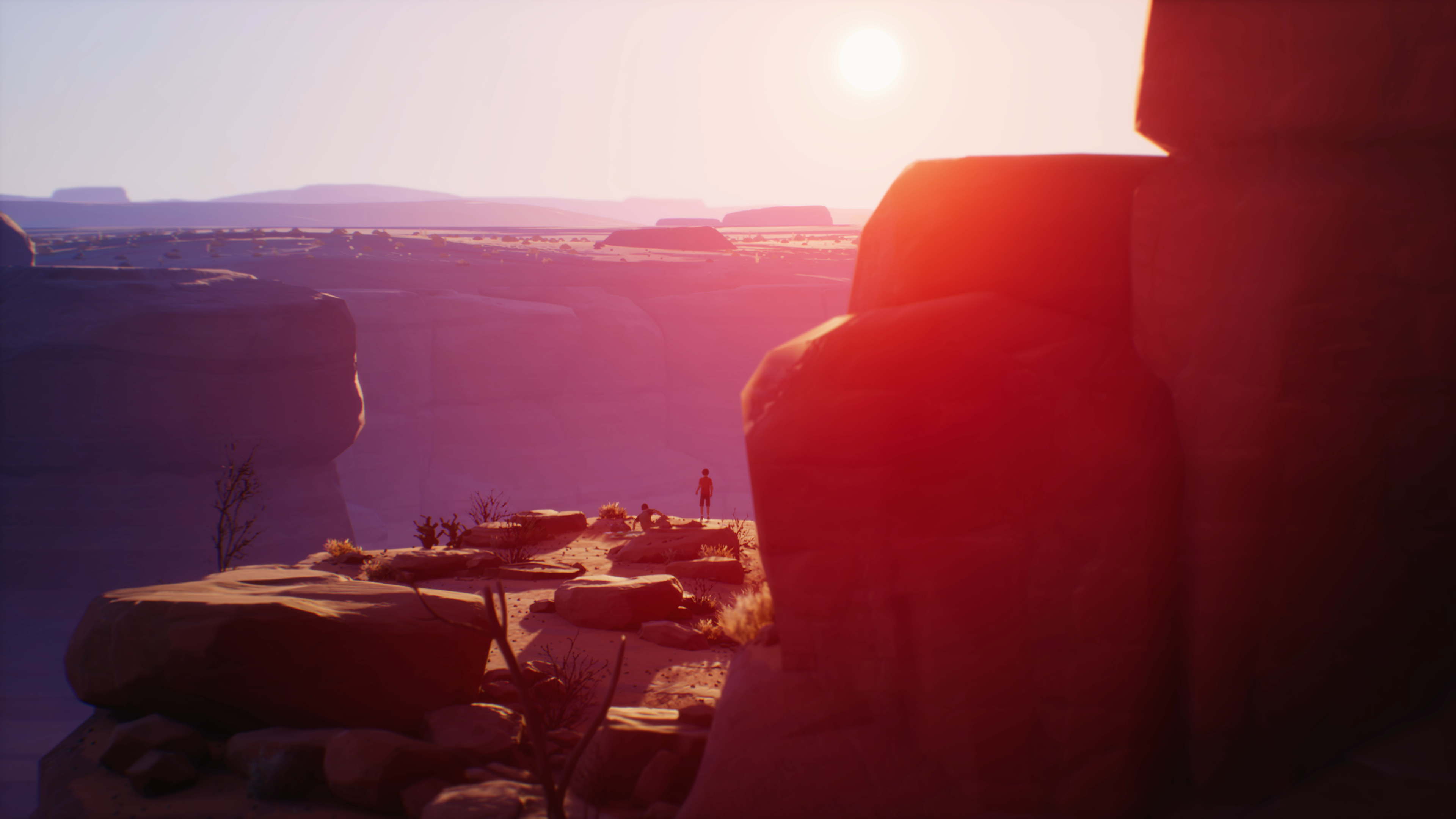 Episode 5 of LIS 2 starts with Sean and Daniel stargazing in an Arizona canyon. As the sun begins to rise, the pair head back to the RV park where they’ve been laying low with their mother after the events of Episode 4. The other residents have taken an instant liking to the pair who have only been staying there a few months. Among these residents is a familiar face from Life Is Strange Season 1. The militant and abrasive security guard from Blackwell Academy is not the same David we know. Here he is kind, wise, and still reeling from his split with Chloe’s mom after the events of Life Is Strange.

David plays a key role in helping the brothers continue their journey as he gifts Sean a police radio so they can stay one step ahead of the cops as they continue on to Mexico. However, if players eavesdrop on a phone call he has with Joyce, it seems to indicate that everything after the bathroom incident in Life Is Strange never occurred, meaning that Max never discovered her power. This feels like a retcon as the very first episode of LIS 2 shows us the fate of Arcadia Bay based on the ending choice players made in LIS 1. This immediately had me puzzled and took away all the excitement of David’s return and any possible connections to the first season. 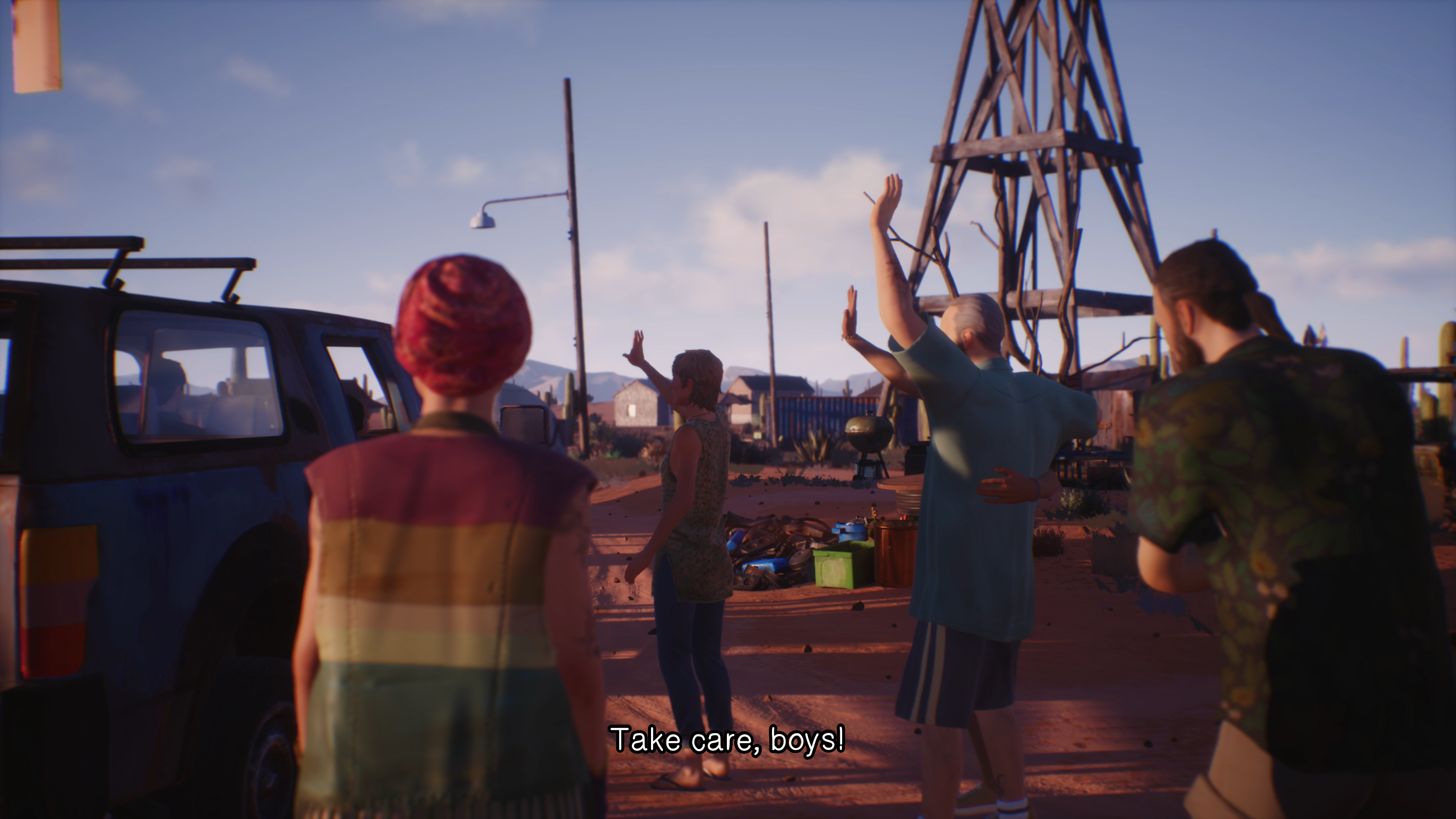 One of the more emotional moments of this episode is when the brothers have to leave their newfound Oasis home when their mom learns that the police are closing in on their whereabouts. After saying their goodbyes to everyone at the camp, the pair set out to make the five hour drive to the border. Now, the only thing standing in their way is the wall that borders Arizona and Mexico; however, nothing is ever easy for the brothers and soon the sins of their past, and the police catch up to them.

After ripping a hole in the border wall, the brothers decide to return to their car and continue their drive toward Puerto Lobos. Soon a gunshot erupts from the distance and hits Daniel in the shoulder rendering him unconscious. Not knowing what just happened, Sean rushes to check on his brother and is soon attacked and subdued by two vigilantes who thought they were just protecting the border. However, one of the vigilantes is immediately upset by the fact that they just shot a child and rushes to check on Daniel while the other continues to harass and threaten Sean. Soon the police arrive and break up the dispute arresting both Sean and the vigilantes and bringing the injured Daniel to the infirmary. 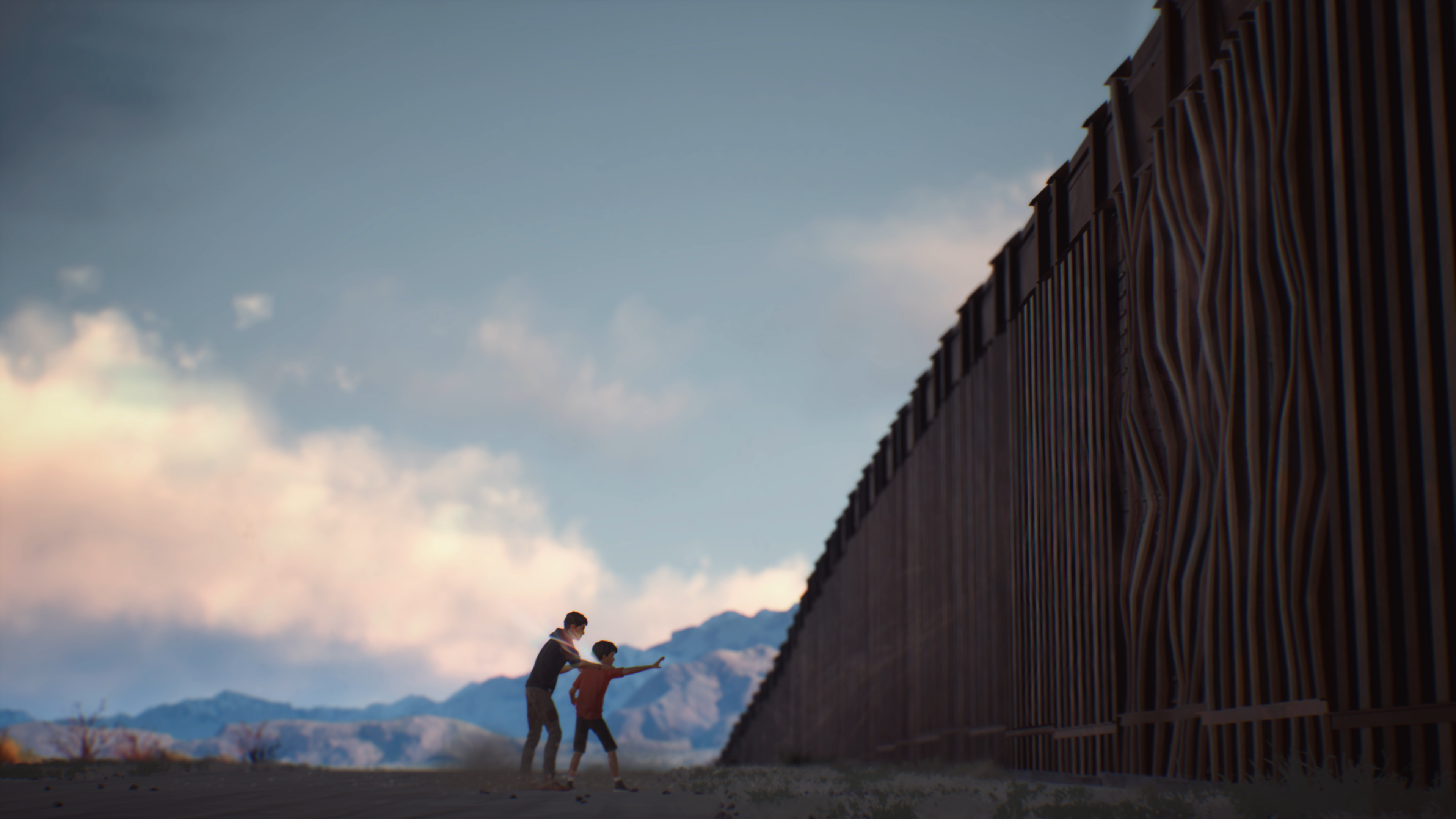 What happens next is completely up to players as the choices really open up at this point in the episode. In jail, Sean has to reunite with Daniel and gets interrogated by the officer that arrested him. In the cell with Sean is a hispanic couple who are expecting a child and only crossed over to seek a better life for their family. In the accompanying cell are the vigilantes responsible for shooting Daniel. Without spoiling what happens next, Sean gets an opportunity later on to help these characters. Players can choose to respond to the vigilantes with compassion or lash out at them with violence. In my ending, I chose to offer them compassion despite their rampant racism and lack of logic and forethought to their actions.

However, the choices I made never got explored further in my ending. Out of 7 total endings, the one I earned didn’t offer much closure for the supporting cast of this season. Where last season gave us a glimpse of how David, Joyce, Blackwell Academy, and Max all dealt with the aftermath of the Season 1 finale, here, we don’t really learn what happened to Lila, Brody, Cassidy, Finn, or anyone else the pair encountered along the way. Were they arrested as well for aiding and abetting, or were they called as witnesses in court? I never found out, and unfortunately, even in the ending that I got, I wasn’t able to hear what the characters said to each other. Although I had subtitles turned on, they were not working for these sequences, so I could only guess what words were spoken. 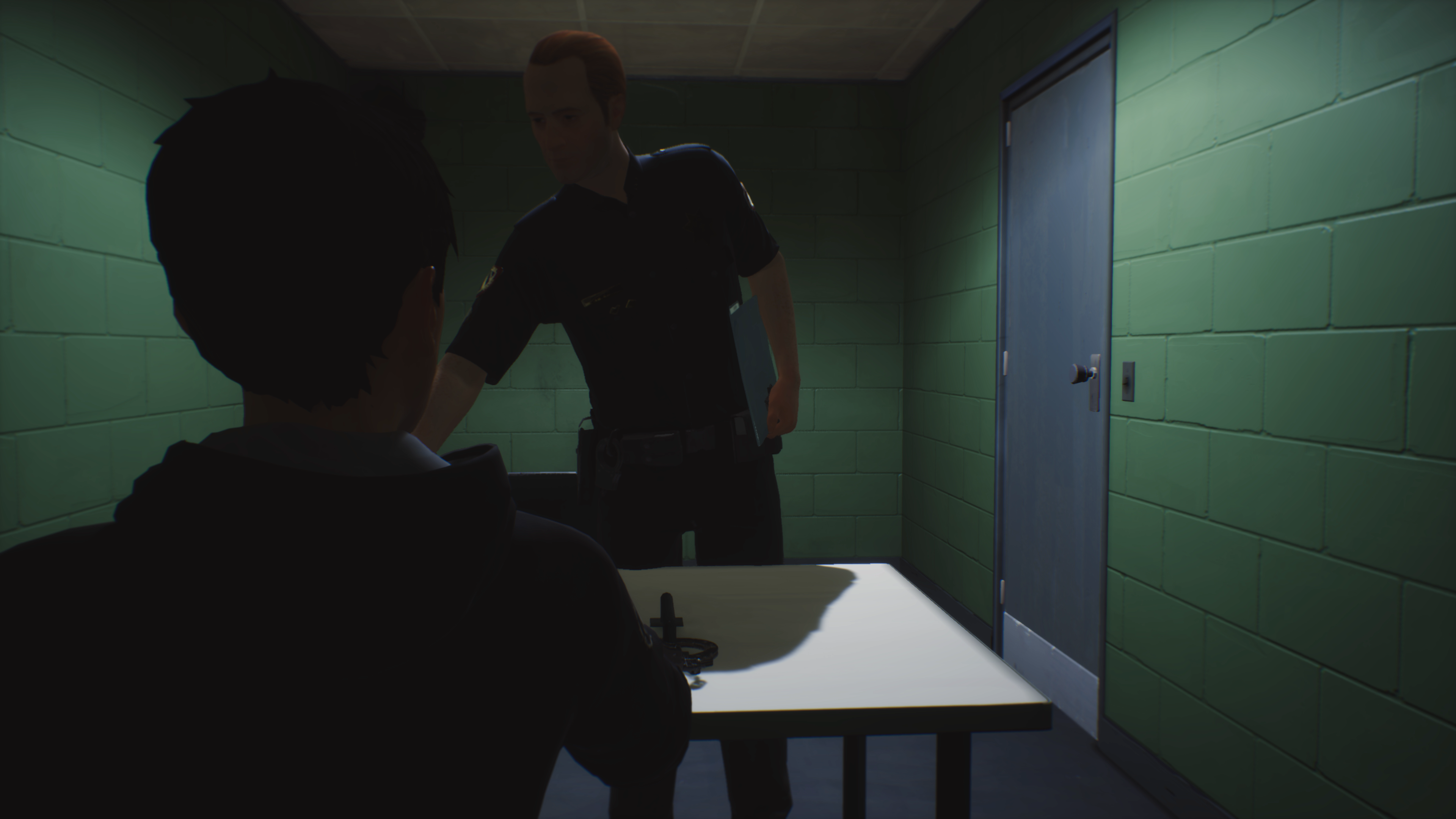 Overall, players who enjoyed the first Life Is Strange will absolutely find a lot to love with Life Is Strange 2. Dontnod has a knack for crafting realistic characters that you either immediately love or hate. This is one of their strengths and the writing for the dialogue has always been one of their strong suits. However, everything else with the plot felt a little disjointed this time around and the finale felt incredibly rushed.  I didn’t feel that I got enough time to say goodbye to these characters, and while my ending was pretty good overall, its also kind of bittersweet in that I felt like I made all the right choices morally and got royally screwed over at the end. Because the last episode was so rushed, players don’t get to explore any other possibilities beyond what Dontnod gives them to work with. Why do we never get to see Sean defend himself and Daniel in a courtroom with everyone they’ve encountered so far testifying about their actions? Depending on the choices made, this could’ve led to a really interesting finale, but we never get to see that play out like I thought we would. 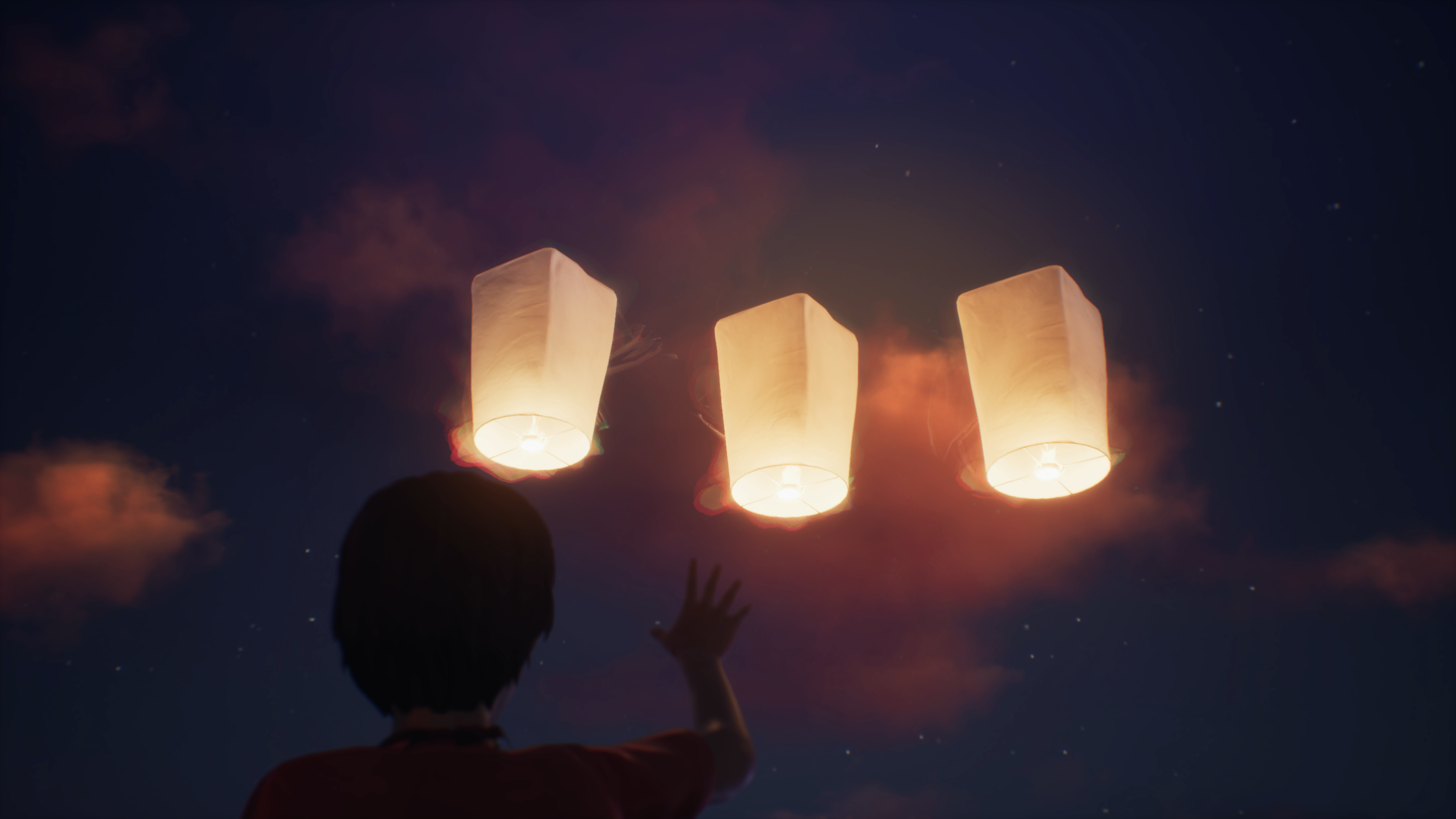