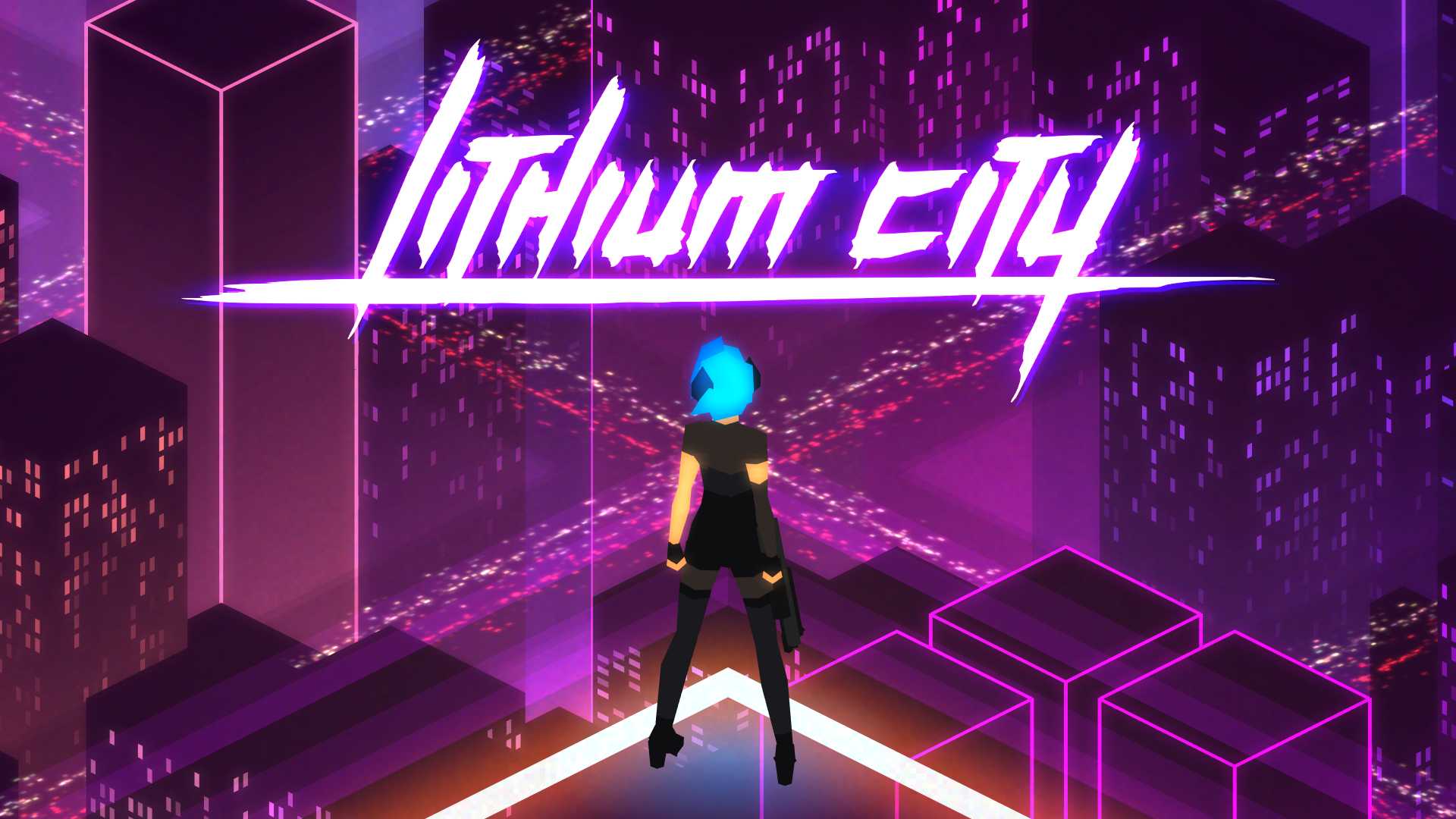 So…I didn’t know that cyberpunk could be considered a genre, but according to Steam, it totally is. (And…I guess GUG, too, but who’s counting?) There’s a bevy of cool futuristic games on the market, and Lithium City, by Filipino indie developer Nico Tuason, attempts to make its mark on the Steam store as an isometric, beautifully designed shooter that nonetheless may be one of the most infuriating experiences I’ve ever had.

Violence: The game is centered around violence. You punch, kick, shoot, and stab enemies, whose corpses and blood eventually litter the rooms you leave behind. The polygonal art style helps to diminish the impact somewhat, but it’s still graphic, especially for younger audiences. 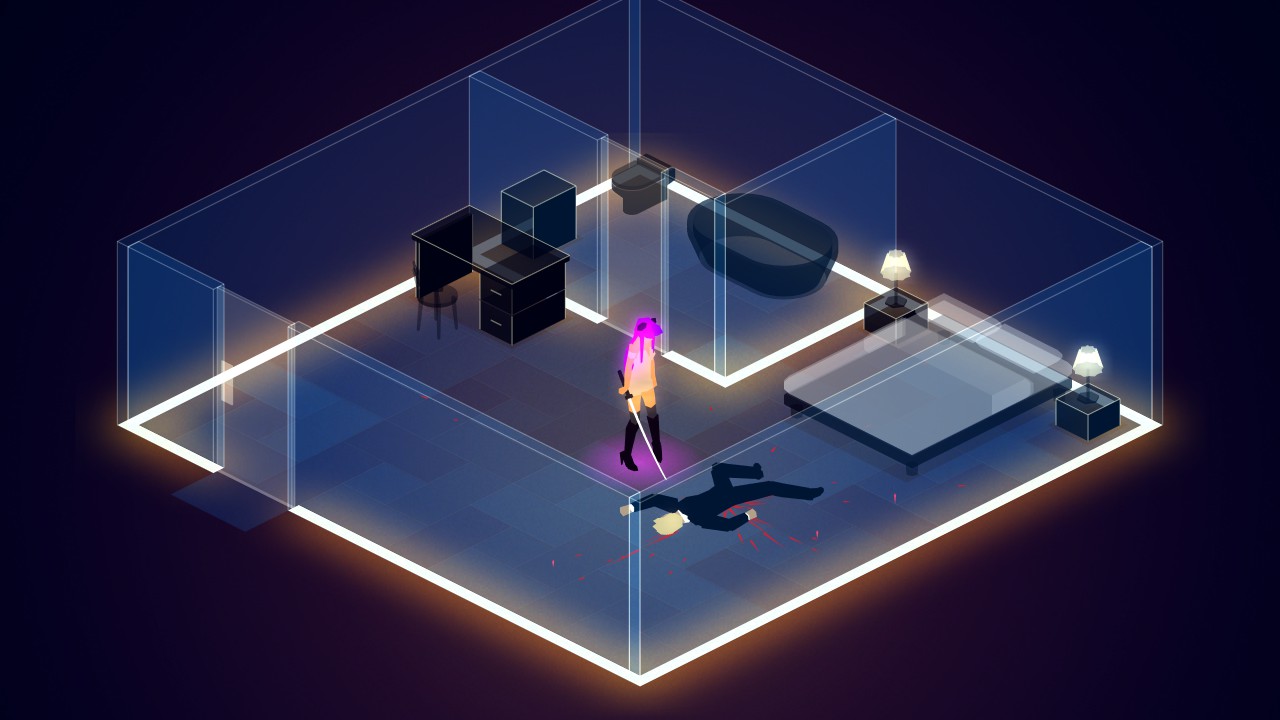 “Well it just so happens that your friend here is only MOSTLY dead.”

I’m just going to say it: while I enjoyed most of my time with this game, by the time I was done, I hated it. Lithium City pulled the rug out from under me in its last moments and left me absolutely infuriated, to the point that I gave up before actually finishing the last boss. But I’m not sure I can blame the game for that.

Let me start off with the high points, and there are quite a few. First off, the amount of polish on display here is astounding. Indie gaming can be a hit-or-miss market, and I will say that Tuason has hit it here. The game looks absolutely gorgeous, with a polygonal art style reminiscent of Superhot or Orwell: Keeping an Eye on You. Every environment glows with neon color and shading that really makes me wish I was playing it on the Switch or PS4’s beautiful HD graphics rather than my dinky laptop screen. 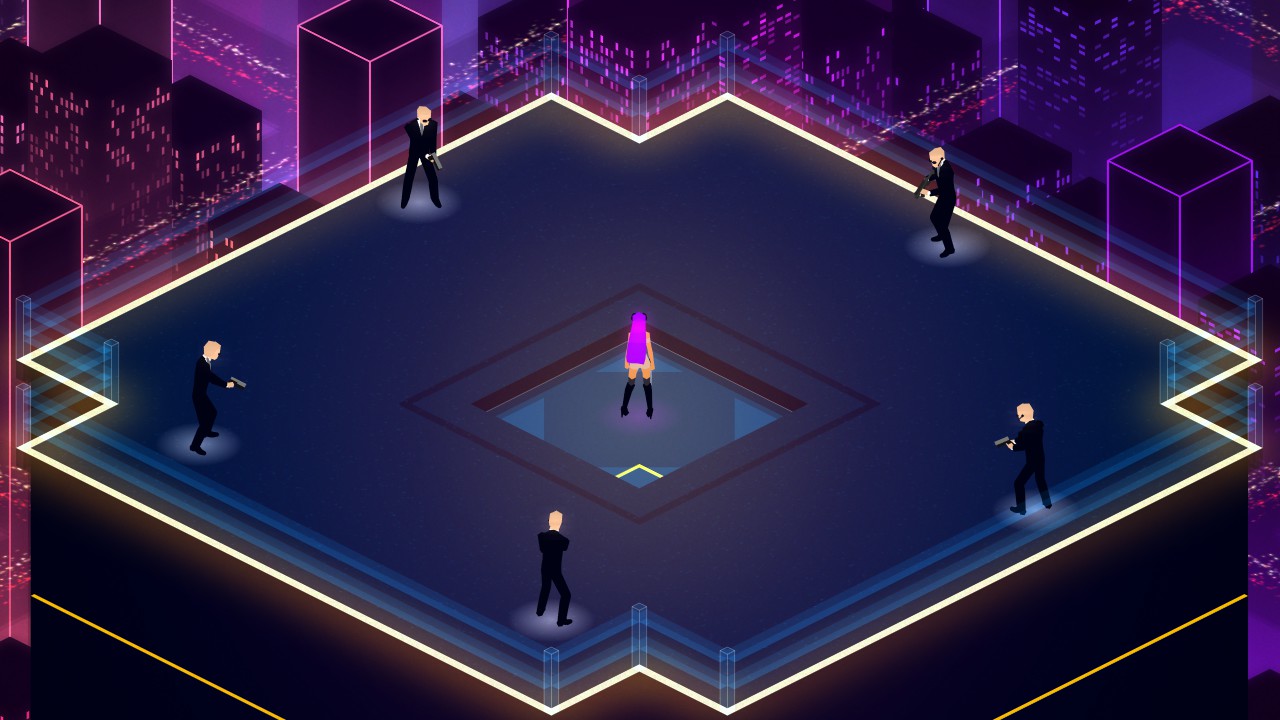 Our battle will be legendary.

The soundtrack is also a strange, but pleasant, surprise. The action-packed gameplay is accompanied by John Camara’s rather chill synthwave soundtrack that seems to be whispering constant encouragement when you encounter a frustrating room (and you will encounter those). Oftentimes cyberpunk games have soundtracks that err on the glitchy and grating side, so I appreciate this choice.

As for story…there’s not much to speak of. There’s no spoken dialogue in the game, and cutscenes, while beautiful and smooth as silk, are few and far between. The first chapter of the game has you playing as a pink-haired swordswoman as she hacks her way out of containment, only to end on the rooftop, surrounded by bodies, weeping. After that, you’re thrust into the shoes of your actual protagonist, a blue-haired brawler/shooter/ninja/swordswoman named Tsunami. From there, it’s room after room of thugs, security guards, police, strange zombie-like creatures, and city commuters standing in your way. I’m not sure why Tsunami’s ruthlessly killing all these people, but she’s probably got a good reason for it. 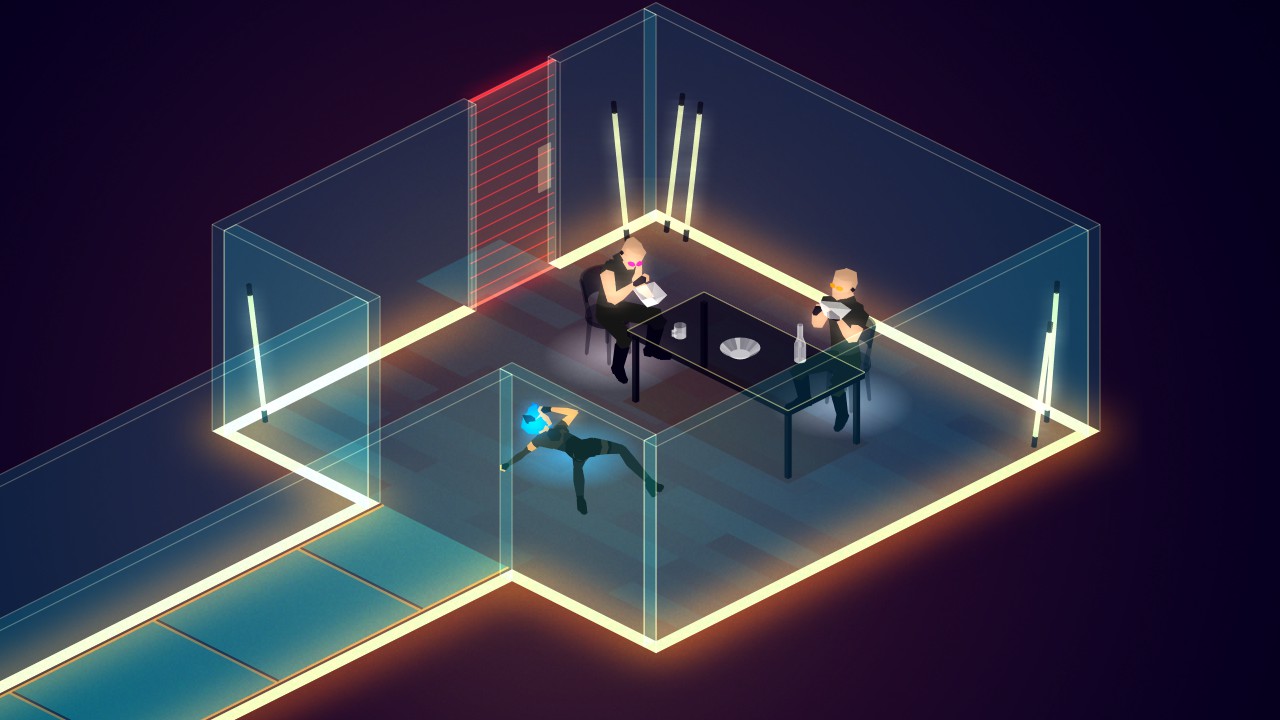 I generally prefer more story in my games, but I suppose that’s just not what this game wanted to bring to the table. I respect that. So what does Lithium City offer? Well, that’s where the gameplay, and the bitter aftertaste that still lingers in my mouth, come in.

The gameplay is pretty typical action-adventure. Move your mouse to aim, click to attack. The game starts you out with just your fists and feet, but eventually you’ll come across pistols, SMGs, throwing discs, grenades, swords and more. Every weapon plays slightly differently, and you’re constantly re-evaluating what weapon you’ll need for a particular situation. You may want to strategically take out the faster, weaker enemies with a smaller gun, saving the stronger shotgun for the tough, slower guys, or you may want to grab an SMG and blindfire to take out a mess of enemies, then use your fists to finish off the stragglers. 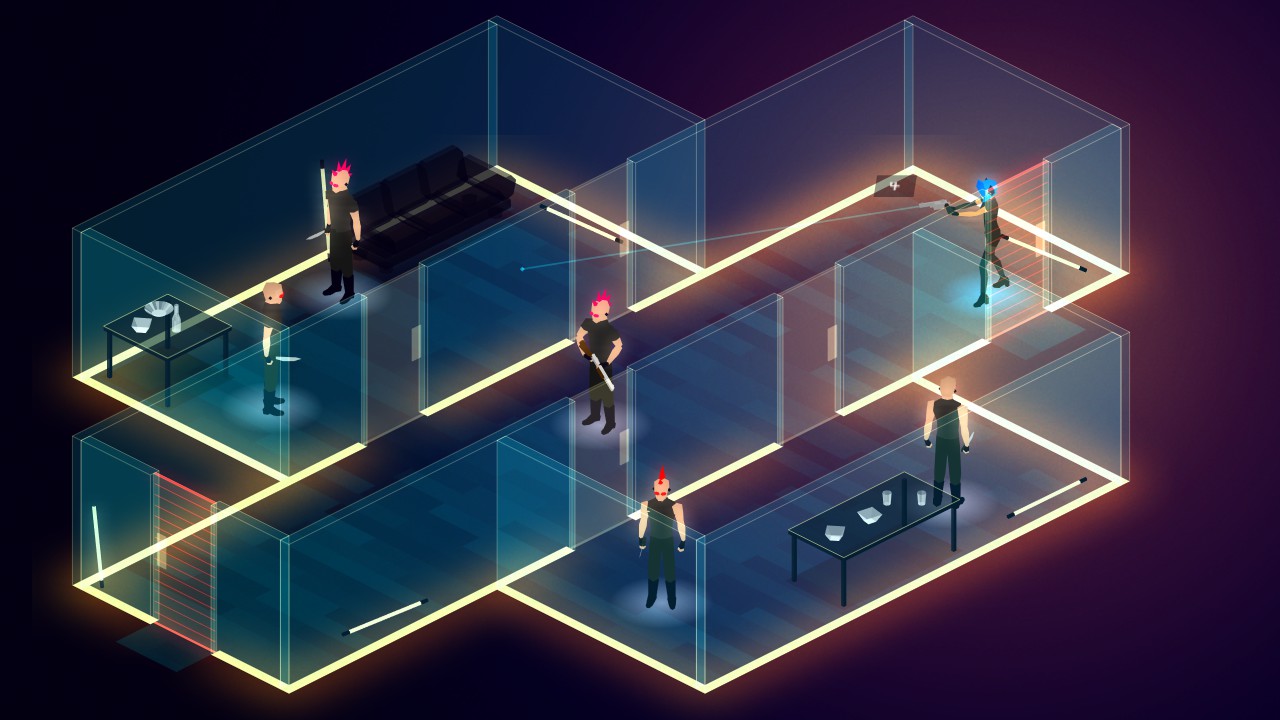 This is where Lithium City shines the most. These moments that allow you to form a strategy and test it out were honestly really fun. Finding what didn’t work and adjusting accordingly to see a successful run was satisfying, and kept me wanting to continue. Unfortunately, that sort of gameplay makes up only about half of the game.

The other half can be split into two categories. The first is what could be called an obstacle course. In addition to fighting skills, you’re equipped with a dash that will dart you out of harm’s way, as well as through laser grids. Lithium City dedicates a couple levels to putting your reflexes to the test. Sometimes that involves hurtling you down conveyor belts trying to dodge spike walls that kill you instantly. Other times it’s having you dart across a rooftop dodging machine gun fire from an enemy helicopter. These levels were not fun. Instead of forming a strategy, it became a matter of memorizing the level and executing just the right dash at just the right time to escape death, made even more difficult by the isometric viewpoint and subsequent control scheme. If you make one wrong move, it’s back to the beginning of the room. I appreciate games that let you get better and then reward your skill with progression, rather than games that reward rote memorization. 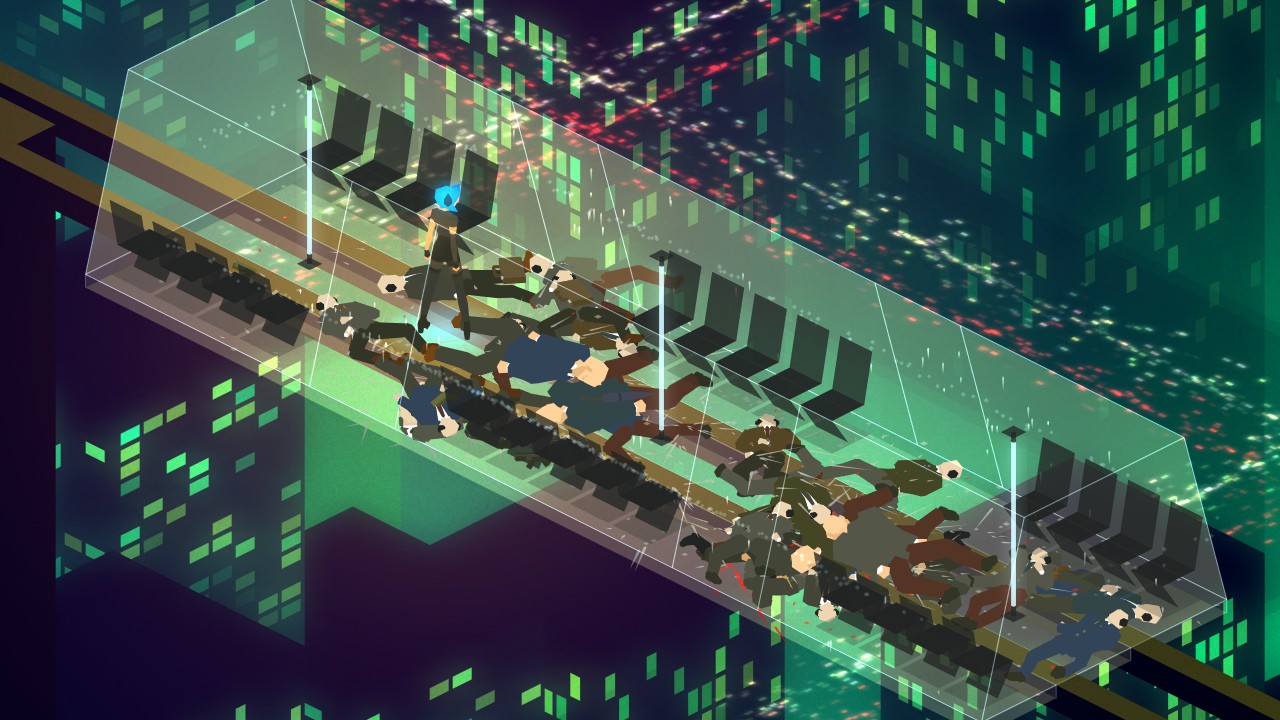 That’ll teach you to get on a train.

But my frustration with the obstacle courses pales in comparison with my fury at the second category, something I’m going to call “twitch battling.” Remember what I said about strategy? Throw all that out of the window with these levels. Scattered throughout the game—but disproportionately in the last chapter—are rooms filled with wave after wave of cannon fodder enemies that can and will swarm you with no way to escape. Your best bet is to launch a chaotic attack like the throwing disc that will take out a bunch of them right off the bat and hope you don’t let more than two get close to you, because, since you flinch every time you’re hit, if three or more enemies get to attacking, you have no chance of escaping at all, and you’ll be dead faster than you can say “NANI?!”

All this comes into terrible, terrible focus with the last boss. After fighting through wave after wave after wave of enemies, you’re faced with one final challenge: a strangely familiar pink-haired swordswoman. What ensues from here is a toe-to-toe battle that is more infuriating than any other moment in the game. Remember that flinch mechanic? Well, that’s extra fun when said boss can one-shot you with a combo from which you had no chance of escaping. Combine that with swarms of javelins and homing gunshots, and this boss takes any attempt at strategy and crunches it up into tiny little neon-colored pieces. The battle boils down to dashing in, getting one swipe in with your sword to chip away at one of the boss’s three health bars, and dashing away, only to probably get stuck in a corner and absolutely slaughtered. I tried, I really tried to beat this, but I eventually got so fed up that I gave up on ever completing it. 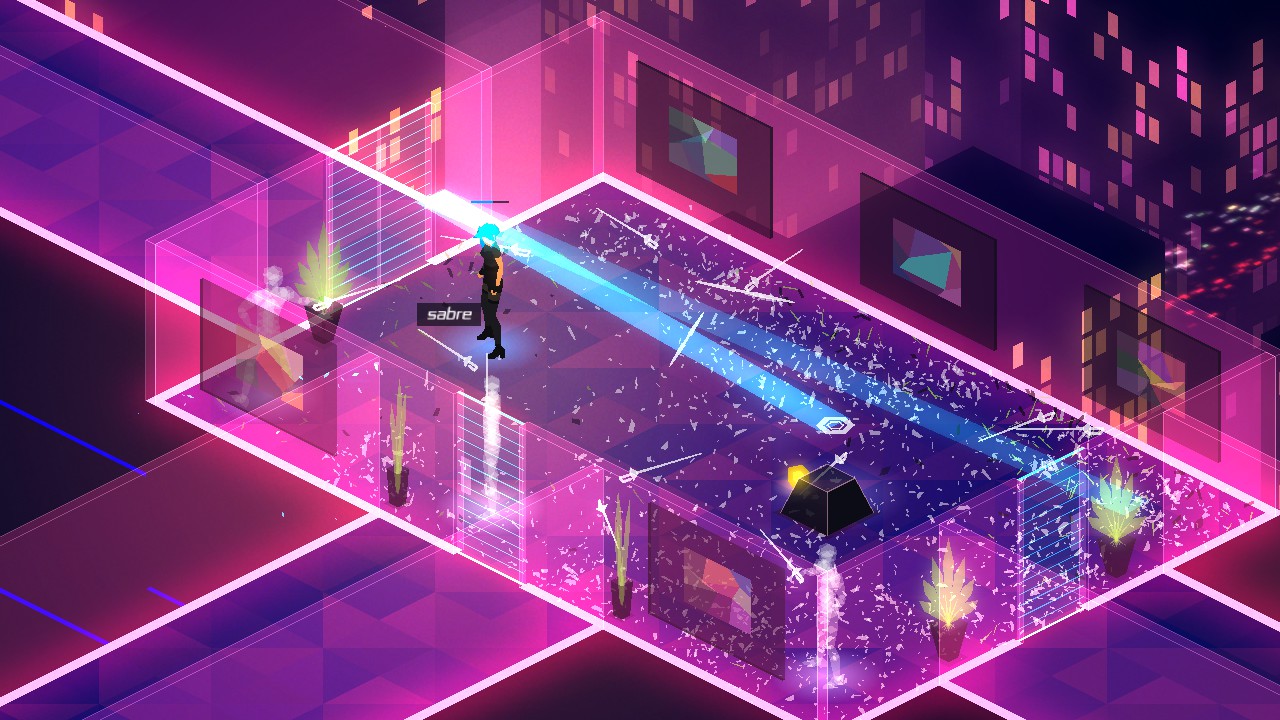 And that’s why I said what I said at the beginning of this review. For as much fun as I had with it, Lithium City smacked me in the face with a difficulty wall that killed the love I had for it. But I think that’s what it’s supposed to do. It’s a reflex-based shooter, made for people who enjoy twitch gameplay and the satisfaction of a hard-fought boss. It’s this kind of gameplay that’s always kept me away from games like Cuphead. I hate having to replay a level time after time to remember every single move I have to make to survive. It’s a surefire way to soil any memory I have of a game. But that doesn’t make a game bad. And Lithium City is definitely not a bad game.

Lithium City is a game that knows exactly what it is, and doesn’t apologize for it. My best recommendation for it is know exactly what it is you’re getting into, and be prepared for a lot of restarts. If you’re okay with that, then it absolutely has my stamp of approval. It’s a gorgeous, polished experience with a bomb soundtrack that also just happens to make me die inside. Plus, the dev team seems like they really listen to their audience. There have been several fan feature requests, like a meter to reduce screenshake, that have been implemented in updates. That’s the beauty of indie gaming; it’s not hard to get in contact with a developer who is also more likely to actually listen to you. 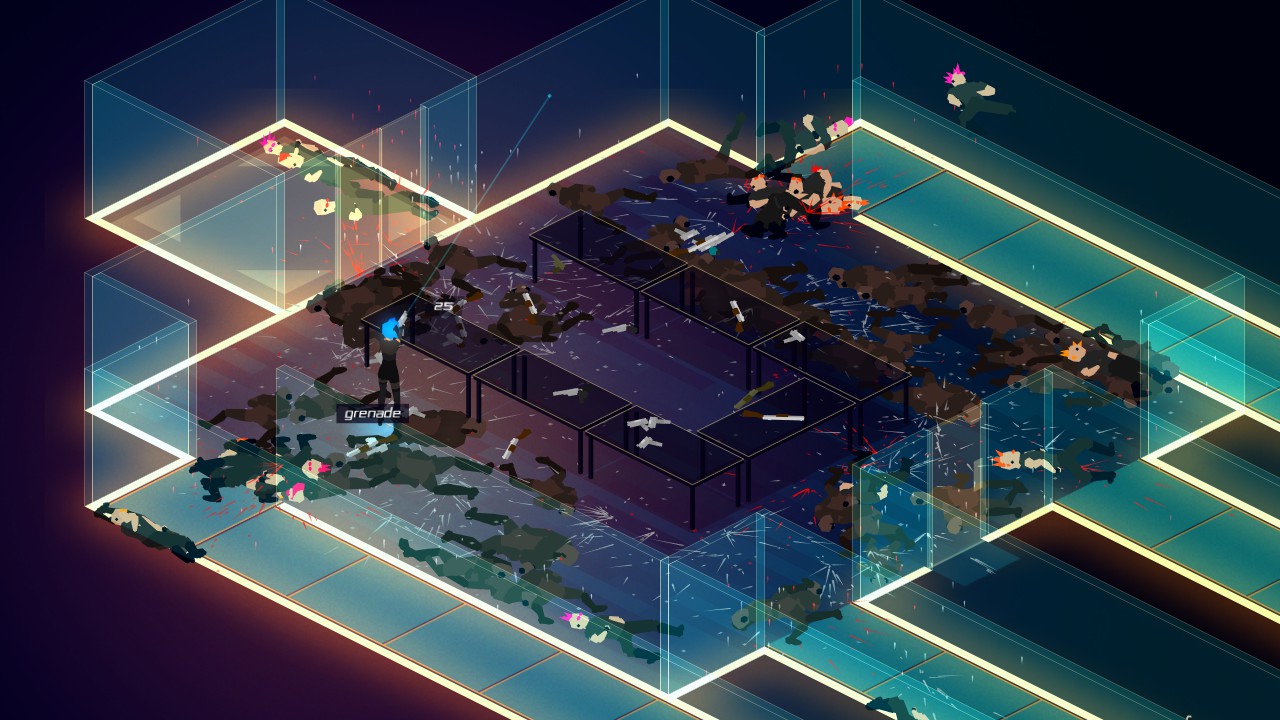 It’s a rather short experience, with the main campaign being about two hours or less, but for an asking price of $7.99, I can’t complain that there’s too little content. Plus, the developer has announced more chapters coming in a free update, so if you’re left itching for more beautiful, infuriating cyberpunk shooting, you won’t be disappointed. Just…don’t expect me to be joining you. I think I need to play some Animal Crossing to cool down…

Lithium City is a polished and satisfying cyberpunk beat 'em up with thoughtful mechanics and some very frustrating difficulty spikes.