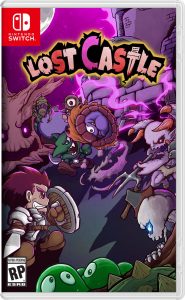 Lost Castle is a game aiming to look cute, grant a challenge, and offer a simple experience with no complicated story, button combinations, or insane strategy. Created by Hunter Studio, this small project has reached some acclaim. It reached two million players and is now on the Switch for more to play.

Lost Castle  hinges on the story that the owner of the castle gave himself and everything to evil to become an almighty sorcerer to the spirit of death, claiming ultimate power. As a core mechanic, one will collect souls, demons, dark summonings, evil magic, spirits, possessed trees, wizards, and monstrous creatures, to name a few things.

The violence is cartoonish in nature, so no excessive hacking or anything. The blood is mild, only appearing when you’re hit occasionally. When you die, your character just falls over. Everything wants you to die, and this is uttered frequently.

At times, enemies will crush other enemies as an entrance to their boss challenge. There is a potion that gives you the runs, and it shows as little poop emojis. Words like h**l, and d**n appear but rarely.

The potions available to consume in the game have varying effects. One of them makes you completely drunk for a time. It’s unknown to me if the potions do anything else inappropriate because there exists no comprehensive list of effects, and they are all random.

The adventurer is only braving the castle selfishly for treasure. There’s no good ending that comes from beating the game. If you manage to win, you die by the real main villain. If you play through again and win, you become the possessed evil ruler of the castle. Any pla-through after that is just a new adventurer taking the same spot. If you play on the hardest mode and collect a gem containing billions of souls, you can challenge the true final boss, death himself. But winning gives you no virtuous ending, or any ending at all.

Like many rogue-like games, you work with what is given to you. This is not like Zelda, where you are destined from the start to be great, and work yourself into the hero of history. In games like this, and others, greatness comes from your ability to make do with what is randomly placed at your feet. This is the core joy people get, and why they’re drawn to the challenge.

On a spiritual note, when we give our complete control of to Christ, we may sometimes feel like we’re in a lost castle. The world would like us to believe that we’re dropped into a random family, culture, and country, and we are stuck with what is laid out.

But the good news is, nothing is random. There’s a reason we got a staff of fire, or there’s a reason why we had to fight the huge glob of slime instead of the giant spider. A good reason, in fact, that we will have the privilege to understand…eventually. 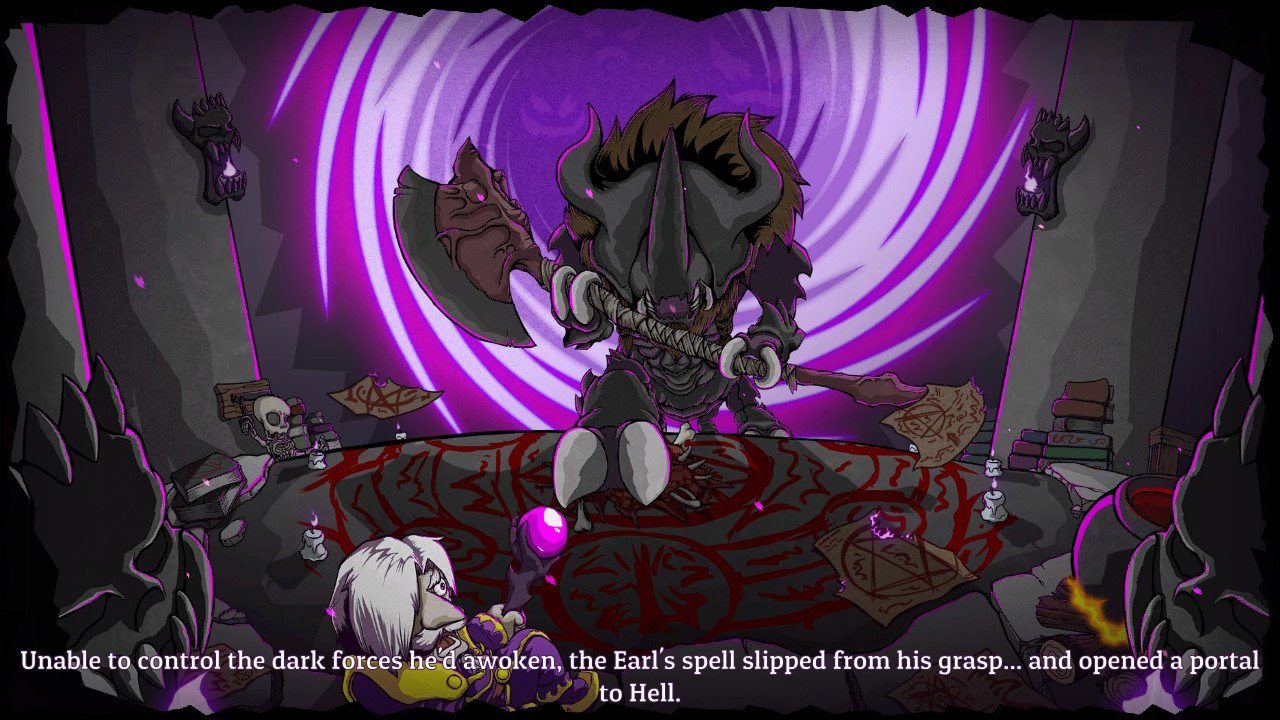 Lost Castle is not a game that one plays for story, so those who do not like prolonged stories preventing their itching fingers from moving are in luck! Instead, this is a game that places a tiny narrative to keep a theme in-tact. The gist is clear: the Lord Harwood has involved himself with evil magic to become the most powerful in the world. Unfortunately, he is merely a pawn. Now the castle has been cursed and infested with demons and monsters, and supposedly a massive treasure is up for grabs.

You play as a random, treasure-seeking, adventurer with no name, and no significance. Hardly a word is uttered from the adventurers except on occasion to clue the player in on what potion they just consumed.

Most of the time, it’s not great.

Lost Castle consists of five areas of increasing difficulty. You can either play alone or with friends. Coming from playing through the game multiple times, It seems pretty evident that this game is intended to be played with friends, because it’s hard. 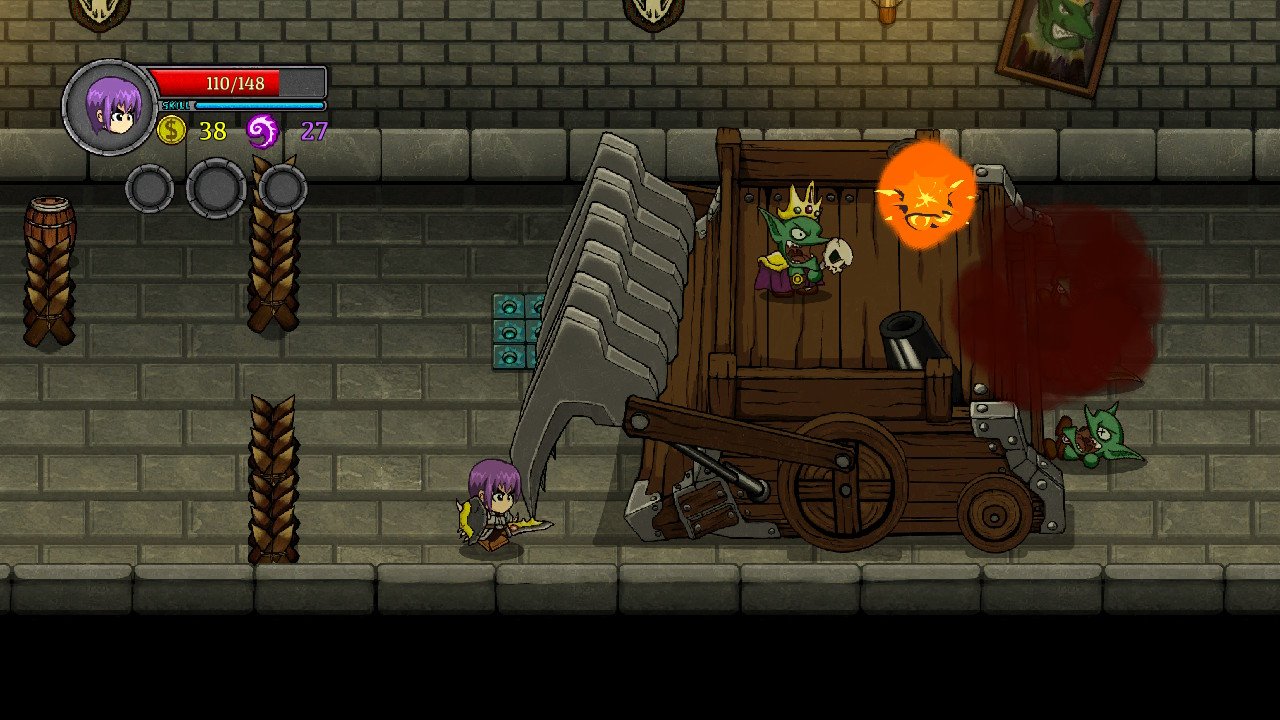 We’re talking Binding of Isaac hard, but not exactly Super Meat Boy hard. And unlike BOI, there’s an upgrade system you can access after death. Yes, like the old Kongregate, and mobile games the likes of Learn to Fly, your objective is to see how far you can get, upgrade, and try again. At least that’s what Lost Castle feels like.

As you unlock certain upgrades with your souls, you sometimes meet new characters. You meet the mysterious cloaked individual standing by the door to the dungeon each time you go through. He’s there at the beginning, and gives a little explanation. Later on, you can unlock a blacksmith, an apothecary, and a thief, all who give you supplies and help.

The gameplay is simple, and that’s where the game falls in quality. Movement can go in eight directions, but attacking happens in two: left or right. The hitboxes on the enemies are weird. I found myself worrying more about proper positioning than just fighting. This led to some aggravating moments where attacks seemed an inch out of place. 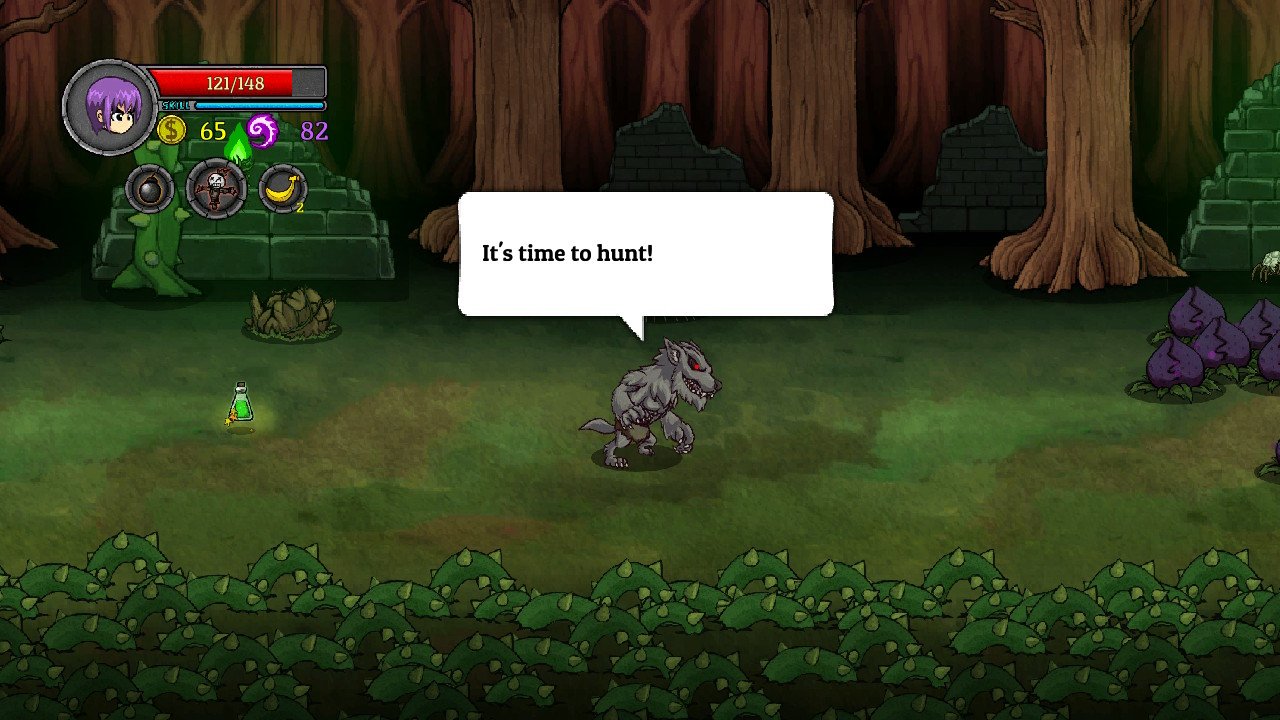 Lost Castle has no dodge button. Some weapons carry an evade skill, but your freedom to miss attacks is left up to RNG. Weapons include swords, daggers, wands, bows, guns, maces, and polearms. Each has a special attack that’s flashy, but in the end, ineffective on later levels.

Each area includes a number of rooms, all differently shaped, filled, and ordered, except for the final room. A boss will always be there, though whichever boss appears changes as well. After you clear a room, you obtain an item or a chest. Inside are healing items, some one-use items like bombs or magic crystals, or another weapon, a set of armor, or money. Money is useful for buying armor, weapons, or items, but it is randomly given. By wanderings mystical shopkeepers, or winning a slot machine.

Lost Castle has two game modes for both solo and multiplayer: the standard mode, and the Nightmare mode you obtain after completion of one complete pla-through. Nightmare mode increases the difficulty of enemies, and keeps exp rate the same. For a reward, the true ending is behind Nightmare mode, which is the only benefit for braving the harder path.

The visuals have a cartoon style aesthetic. Lots of color makes looking at the game easy. The 60 fps stays strong when lots of enemies take over the screen, and shoot arrows, cast magic missiles, and throw bombs. Graphically, the game is impressive. The audio, on the other hand, for the game is a little above bland. The music is uninspiring, and the sound effects come across as standard.

Playing it onor the Switch leaves me at a huge disadvantage. The game seems designed for multiplayer, but I did not have the opportunity to try it. And since I played an early copy, the online rooms were empty. I waited until the day of launch, and sadly, I didn’t find anyone playing online even then. The solo run is for the determined and I never beat the game. The absolute best is the first room in the third area. The lack of good ending and friends lowered my determination.

Overall, my time with Lost Castle was underwhelming. The character animations are robotic, and the fighting offers no balance to their weapons. You’ll quickly find that the staff is the best for its range, and will want it for every run. There’s potential for a good game here. It needs some polish, but it passes for an average game. 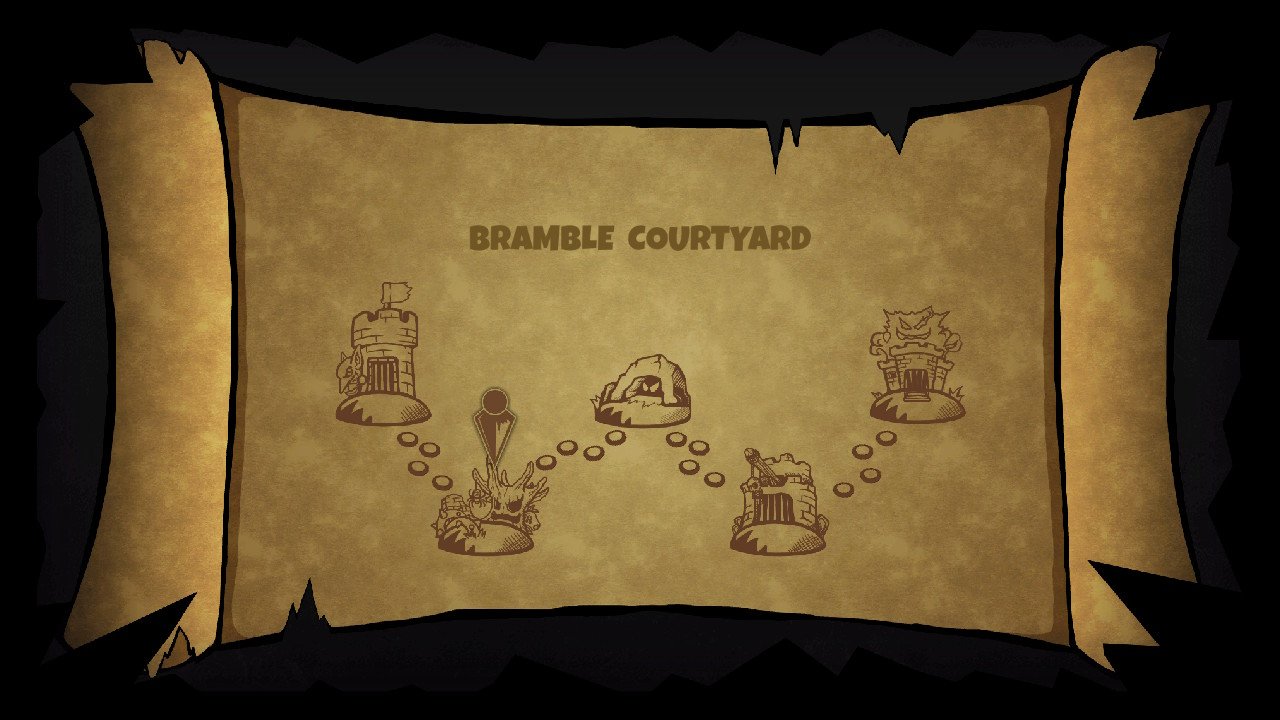