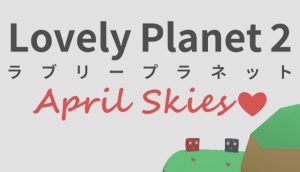 Once in a while, I come across a game that is simple, yet so elegant in the delivery of it’s experience, that it adds to the value of the game. Lovely Planet 2: April Skies appears to be an overly simplistic game on the surface, but the subtle complexity of the gameplay gives it much more depth. The unfortunate problem with Lovely Planet 2 comes from the repetitive gameplay and the lack of explanation at the beginning of the game. I enjoyed the gameplay loop more once I understood all the mechanics of the levels, but up until then, I felt mostly frustrated and lost by the repetition. I felt that my experience with the game was hampered by a loss in translation between what the developers created and my understanding of how to play the game.

Lovely Planet 2 contains no questionable content, even though it’s categorized as an FPS. The “gun” used in the game looks more like a kitchen implement that fires purple projectiles. I will not be calling them “bullets” in this review, as the projectiles clearly are not. The enemies are red blocks with faces that disappear when shot. When the player gets hit by a purple projectile from the red blocks, there is no blood, just the sound of a slap.

I would recommend the game to almost any age, but I believe most younger players won’t like the game’s steep learning curve; I discuss this later. The abstract nature of the game also does not appeal to younger gamers.

I tried explaining Lovely Planet 2 to my wife when I first started playing the game, and I started out by calling it an FPS. I then explained it was more like a golf game. The videos and trailers don’t explain what kind of gameplay is in Lovely Planet 2. The objective of the game is to get through each level in the shortest amount of time while shooting the least amount of purple projectiles. At the start of each level, the game allows the player to look ahead at the layout of the level which I found was helpful to plan out strategy for getting through the level. Much like a golf game, Lovely Planet 2 rewards strategic gameplay with well-placed shots. The obstacles preventing the player from getting to the end of the level are red blocks with faces, red blobs, spikes, and flying apples. It sounds like I am listing things that can be found at a mini-golf course. The red blocks appear in a few different forms, most shoot purple projectiles at the player, and some will dash toward the player at a set time. The blobs are mostly static obstacles, but some will move toward the player when they get near them.  If the player gets hit by a projectile or touched by an enemy, they must start the level over again. The apples infuriated me the most in the game. Apples are launched into the air after the player shoots a red block nearby. If the player doesn’t shoot the apple before it hits the ground, the level restarts.

Lovely Planet 2 plays a lot like a platforming game with jumping and shooting being the only two actions for the player. The bright, dynamic island setting reminds me of Super Mario Galaxy. The overall theme of the game looks very simplistic and childish with a variety of bright colors and basic shapes. The simple design hides the challenging gameplay and steep learning curve. I found that Lovely Planet 2 wasn’t built as a children’s game, which is apparent from the difficulty of each level.

As stated earlier, Lovely Planet 2 is about getting through each level in the shortest time while also shooting the least amount of projectiles. At the end of each level, the player earns stars based on how well they did. The player earns a blue star for simply completing the level. A player who finishes under the qualifying time gets a red star in addition to the blue star. The game rewards a gold star for only using the minimum number of shots required in each level. Make no mistake, the difference between earning a star and not earning one is measured in tenths of a second and exact number of shots. I found that precise standards for earning stars made the game much more difficult than it appeared to be from the beginning. I have stated before that the game has a steep learning curve, because there is no tutorial level that teaches players how to earn the various stars. The first few levels go over some basic controls, but that was problematic, because I was using a controller which was not supported; the buttons didn’t work as the game taught they should. I also found playing with keyboard and mouse was frustrating as well because I had to be so quick in each level. There was no English text present to help out with explaining the game either. Instead, there was cartoonish Asian text. Lovely Planet 2 threw me into the game without any explanation, then started throwing increasingly difficult challenges at me. I didn’t start to understand how to earn the different stars until I had played about three hours of the game. I went back to the beginning to replay most of the levels to try and earn as many stars as possible.

Even after I learned how to earn stars, I still wasn’t sure how to unlock any other achievements in the game. Steam shows several different achievements, but there’s no explanation on how to unlock them. Earning the stars on each level became increasingly frustrating because of the rising difficulty. Each level throws more and more challenges at the player. The game used all three dimensions to present challenges, which made some levels just about impossible to complete because enemies could be hiding above or below the player. I found the most infuriating part of the game to be the apples, which would have to be shot as they fell. But they were placed hiding around corners, not apparent right away until I had gone through the level a dozen times. I would often go through the same level many of times before giving up in frustration. The repetitive gameplay didn’t appeal to me because I felt like I was never going to beat the level.

Lovely Planet 2 will keep you entertained, but only if you want to reach the game’s challenging time and shot count goals.