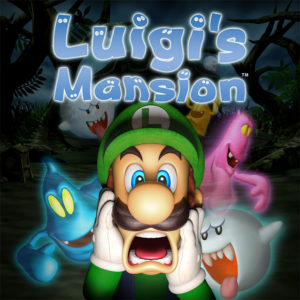 One major qualm consumers bring up when someone mentions their love for Nintendo is that they produce nothing but ports, remakes, and “deluxe editions” of previously released games. Mario will jump on people in a new adventure, Pokemon will be caught and made to battle against the Champion, and The Legend of Zelda will always have you save the titular princess. The overarching story never changes and yet customers appear in droves and shower praise upon these series. Is the formula so tried and true that even haters have no solid points against it or is there a reason something as simple as a fresh coat of paint brings gamers back time after time?

Violence: Luigi sucks up ghosts into the Poltergust 3000, and sometimes that means he receives a few bumps and bruises, as he is dragged across the room and hit with projectiles.

Spiritual Content: There are ghosts and they are hostile. There is nothing to be afraid of, as everything is portrayed in a cartoon-like manner. There is a friendly ghost named Madame Clairvoya who tells you about Mario’s whereabouts when the player gives her Mario’s possessions. 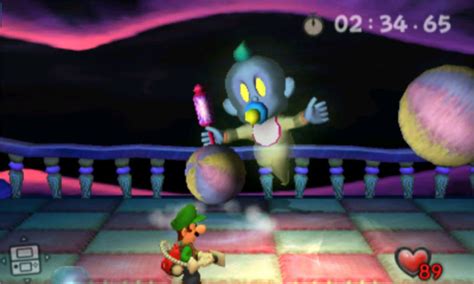 As one of twelve launch titles on Nintendo GameCube, Luigi’s Mansion received positive reviews upon launch and gained a loyal fan following. A departure from the usual, Nintendo decided this was the Mario-related title to kick off the sixth console generation. Not only was Mario put on the sidelines, Nintendo decided on a more whimsical approach to the horror genre. Instead of gore, jump scares, and maniacal villains, they decided a haunted house filled with ghosts would be the best option.

The story of the original 2001 version remains the same—as expected of a remake. Luigi wins a mansion in a contest he never entered and discovers ghosts have taken residence inside. Mario was there before him, but has yet to be seen. You must find your brother and bust these unfriendly residents like Bill Murray in Ghostbusters. In order to do so, you team up with the kooky Professor E. Gadd and use his vacuum-like invention the Poltergust 3000. As one would expect from a horror-themed title featuring Mario characters, Boos play a big role in the story. 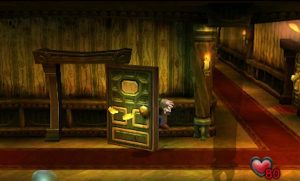 As you discover more rooms in the mansion, more Boss Ghosts are in need of capturing. While it is not required to capture all twenty-three, you are rewarded with treasure for doing so. This treasure goes toward what rank you receive at the end of the game and determines how large the mansion is the player receives from the professor. 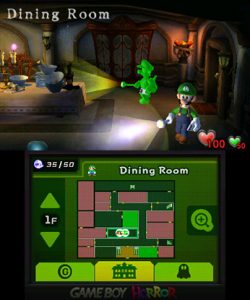 If you played the original, none of this is new information. What is new is the addition of co-op and amiibo functionality. When you scan any Mario, Luigi, Boo or Toad; special things happen in the game. Mario changes Poison Mushrooms dropped by bosses, which make you unable to use your Poltergust, into Super Mushrooms that heal you. Boo shows you where three escaped Boos are and makes tracking them down easier. Toad will heal you when you speak with him after you have scanned the Toad amiibo. Luigi’s amiibo will summon a ghost dog to revive you should you fall in battle. All of this makes the game much easier to play, and function as physical cheat codes like most amiibo compatible 3DS games. In co-op, you partner up with a friend in Local or Download Play. If one of you has a copy, you can play a timed Boss Rush mode of all twenty-three of the mansion’s big ghouls. However, if both of you own it, the entire game can be played together, making for some great times with a pal. It is a shame that this does not support Online functionality, like Luigi’s Mansion: Dark Moon‘s Scare Scraper mode.

On the GameCube, controls were based around a twin-stick control scheme. As you move with the control stick, you can aim your flashlight and Poltergust to surprise and suck up ghosts. This remains similar on 3DS. But on the New 3DS system, you use the little nub and motion controls to aim. On paper, this makes sense and is a natural step in taking a game meant to played with two control sticks into one or two circle pads and a nub. The issue is that the nub does not always work the way you want it to. The easiest way to get it to work is to press on it with your fingernails. If you have the original 3DS with a Circle Pad Pro attachment, this works much better as you can move the pad with your thumb without worrying about how much pressure you are putting on one side of a tiny piece of rubber. The motion controls are also more of a hindrance than a helper as they also do not always work the most efficiently.

If you play with 3D on, having to move around the system will disrupt the effect, leading to image ghosting on the display. The 3D is best utilized when you are moving around room to room when there is not a lot of action on screen.

Another gripe I have is that some design choices feel dated. When you have the Fire, Ice and Water elements equipped, it can be frustrating having to back track to another floor so you can equip a new element instead of being able to swap freely between them. Warping freely between rooms and not just the foyer would be nice as well as there is no run button. 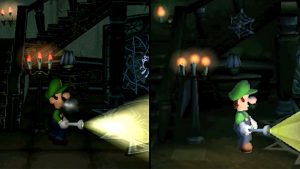 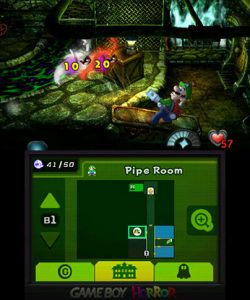 There is more to this remake than just bad controls though. The entire game was rebuilt from the ground up using a new engine. As to why a new engine was used as opposed to the one used for Luigi’s Mansion: Dark Moon is beyond me. Everything looks amazing regardless, the sound is crisp on the speakers, and the lighting makes the dark rooms creepy. The overall visual style is slightly different from the original release, but it was not something I felt would turn me away from enjoying it.

Overall, Luigi’s Mansion is one for the fans. If you enjoyed the original seventeen years ago, you have plenty reason to revisit the mansion. Even if you did not play it back then, you should check it out now.

Luigi's Mansion is one for the fans. If you enjoyed the original seventeen years ago, you have plenty reason to revisit the mansion. Even if you did not play it back then, you should check it out now.