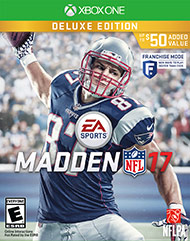 If you’re reading this you might be in shock, because you just clicked a link of a review for a sports game, most likely through one of our many social media outlets. Yes you are still on the right site, and yes we have a review of Madden NFL 17! While some can’t fathom talking about sports and video games in the same sentence, the two cultures can indeed co-exist or even be one in the same. Our editor has even attested to this with an editorial,  “Crossover: Navigating Nerd and Jock Culture“—a great read that I highly recommend to anyone that is about to read this review.

Anyway, in 2016 we now have our annual addition to the Madden franchise. This year, EA Tiburon has made many improvements to the on-field gameplay along with adding some new features as usual. All of these things have been positive changes and are definitely good for the franchise, making Madden NFL 17 one of the best Madden games i have played in some years.

Madden maintains its E rating this year. When thinking back over any possible negative content, I expected explicit lyrics to be a red flag on the ratings. The music is something I somewhat pay attention to when playing a Madden game, and somehow I had not noticed that the songs heard in the game either have no explicit lyrics or are censored. The “E” rating means that the Madden NFL games can be enjoyed by the whole family just like watching the sport on television (though watch out for some of those commercials). 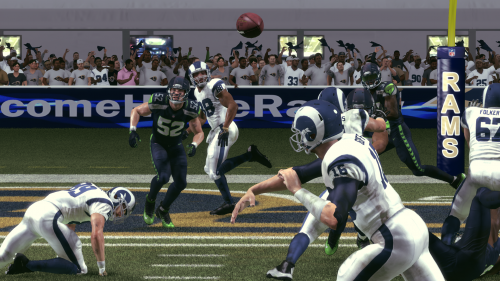 The intro puts a spotlight on The Rams, who are back in Los Angeles

Every year the franchise goes through changes, some new hook or incentive that boasts improvement over last years release. Before we get to the on-field gameplay, I would like to touch on the biggest improvements, Franchise Mode. Unfortunately, the Ultimate Team and Draft Champions modes have not undergone any significant changes; everything is now streamlined in the franchise mode to make it easy to manage every aspect of your team. The Game Prep section no longer determines player behavior—it tells you what types of plays your opponent team likes to use while giving you a series of practice challenges so you can learn to counter them. These practice challenges go deep into the game of football by literally explaining every offensive formation and defensive look—how a defense lines up against the offense that the QB “reads” before snapping the ball—that can be discerned within a single play play, so you can know what to do when the time comes. The menus of the Franchise Mode are also better to navigate, now putting things such as contract signing, trade offers, scouting, and player upgrading front and center on your main tab. 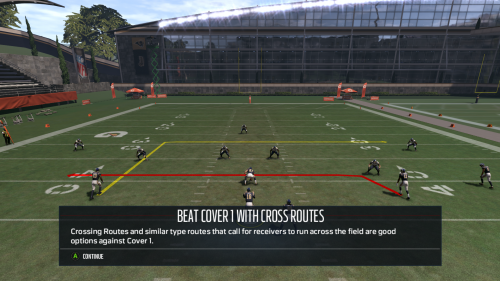 This new feature helped me learn a lot about the sport itself.

Last year it was a struggle to play defense after Odell Beckham’s magnificent catch. The developers have now added some new mechanics to receiving that were overpowered. In Madden NFL 15, we saw a big improvement on defense with new mechanics that ended up being overpowered as well,  most likely inspired by the performance of the Seahawks’ defense that year. Those mechanics are still here but toned down. Between the changes on offense and defense, it is definitely more satisfying to make some of those epic catches.

The run game has been improved with prompted button presses that bear similarity to the older games in the series. While running the ball you can now seriously fight for every yard. When a button prompt appears, keep tapping it and the player will push forward and in some instances break free and get a touchdown. The game is now fun and perfectly balanced on both the offense and defense sides of the ball this year. 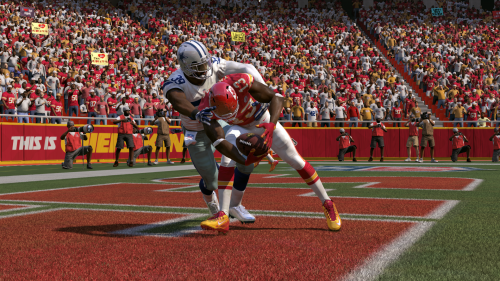 Not only did he make the tackle, on the way down the ball was smacked from my grip

A larger emphasis on Special Teams is another noticeable change this year with a new kicking meter, including an emphasis on blocking during field goals and punts. The new kicking meter puts a larger focus on strength and accuracy; tap once to get the bar going, and a second time when it gets to the green power zone, then a third time as it hits the accuracy section near the bottom. I found this to be a major help in kicking some of the long distance field goals. This is something I was terrible at in the previous games. When starting Madden 17, you will have a chance to learn these new on-field mechanics via the skills trainer, where it will teach you how to kicks. It was nice to be educated, but this does not change how things actually turn out on the field. Too many times have I not gotten there in time and was even penalized a few times for roughing the kicker. By now I thought I would have at least one block under my belt. 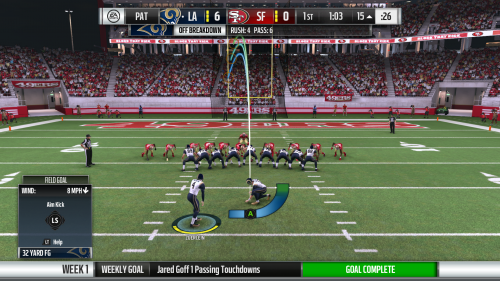 A visual example of how the new kicking system works

In the past couple years, each team has slowly been resembling the overall personality of how they play on the field. The developers have nailed that spot-on this time. What I mean is, teams that are great at passing naturally should not be able to win simply with running the ball and vice-versa. While that is indeed possible, you would naturally want to play to your team’s strengths. For example, in a matchup between the Chargers and Falcons, both teams have a similar overall rating. The Falcons have a strong receiving corps as the Chargers are kind of average on both sides of the ball. Due to the strong passing game of the Falcons on that front, they have a greater chances of getting the win. My point is that each team is going to play just like you would see them do so in real life. 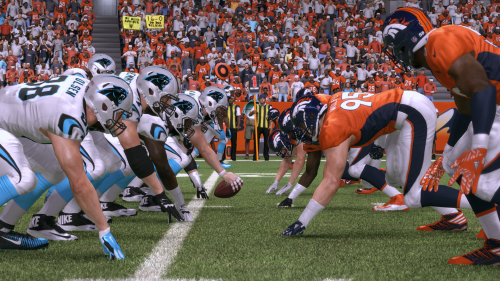 The graphics and presentation are still top notch.

As I said earlier, this year’s Madden is one of the best I have played in a very long time. The series has been a special one for my family. because I get to share in a form of media that many of my relatives do not enter unless it is a sports game or Call of Duty. I am pleased to say that EA Tiburon has successfully improved the series yet again. Tthis opens up the opportunity to spend more time and make new memories with those certain relatives that I love to play these games with. To my fellow sports-geeks, If you held off on this one I highly encourage you to pick it up.

Madden NFL 17 is the most fun I've had playing a Madden game in a few years. While offense gameplay dominated last year's release, this year the game is fun on both sides of the ball.