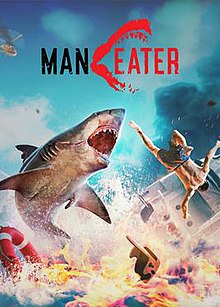 Ever want to play as a shark in a video game? Then I have a fun game to tell you about. Yes, we have had Jaws: Unleashed and Hungry Shark in the past, but if those did not satisfy your appetite, you’d be able to feed that craving with Maneater. This “ShaRkPG” comes from Tripwire Interactive, who are well-known for their work on the Killing Floor series.

Some of today’s biggest games are massive open worlds and 50+ hours long, but Maneater is more a digestible experience that a wider audience can sink their teeth into. Rather than being a realistic simulation, Meaneater takes a more humorous and yet violent approach—though you should expect the latter if you are interested in playing a video game about sharks. If everything I just described sounds right up your alley, I’m happy to open up the beach and let you swim around in this review for as long as you need to.

Violence: Maneater is full of violent gameplay as players will take control of a shark to eat and attack various sea creatures and humans. One particular scene depicts the shark biting a man’s arm off, and later his leg. In another scene, a man stabs the shark continuously as he is being chewed on. Blood is a prominent sight in Maneater, especially as players can use the thrash ability on enemies.

Drug/Alcohol References: The game includes references to marijuana, cocaine, heroin, and fentanyl. When escaping the hunters, they will sometimes mention grabbing a drink when they return to land.

Sexual Content: One of the human characters in the game shares that he is banned from one of the locations in the game, but that there is still plenty for him to see with a pair of binoculars. A character makes a joke about how his grandfather refers to the vagina as “the little man in the canoe.” Another joke mentions that tenacles can be alluring to sea creature predators and people with Jellyfish fetishes.

Language/Crude Humor: Due to the game’s reality show theme, curse words like “f**k” and “sh*t” are censored. There are also a few Cajun French words spoken that translate to those same words.

There is a lot of crude humor, such as jokes about defecation and urination, along with anecdotes about sea creatures having a diet of hypodermic needles and used pregnancy tests. Much of the humor in the game takes a jab at humanity and pollution of the sea. One scene in particular shows covered bodies tied to cinder blocks in the water that have shown up there as a result of Mafia activity that is going on in the area. Many of the discoverable locations include the skeletons of dead people. 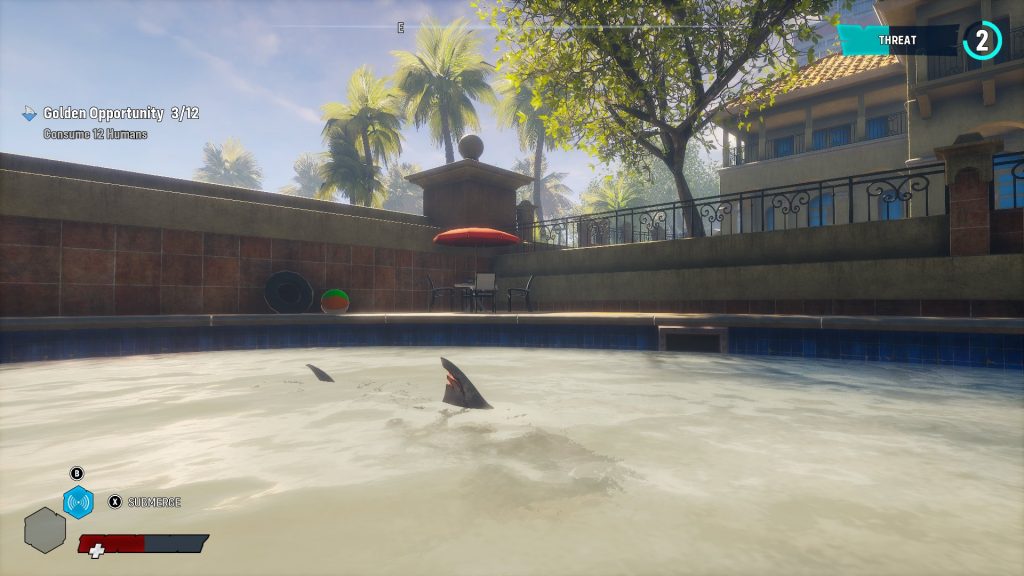 I found my way into someone’s pool.

There is much more to Maneater than what is seen on the surface. When I’ve told people that there is a story to the game, I get surprised reactions before I even start explaining. It is a simple premise, yet goes deeper in more ways than even I expected. As a shark, you are one of the stars of a Discovery Channel-like reality show opposite of a Shark Hunter named Scaley Pete. This fictional show is narrated by Chris Parnell, known for such roles as Jerry from Rick and Morty and Cyril from Archer and much more.

In a Metroid-like fashion, you start as a full-grown Bull Shark who takes on Scaley Pete—though you may have the desire to eat a Jet-Skier or two before-hand. Once the battle is finished, you are caught by Pete and gutted only to have your baby taken from your womb. However, that baby doesn’t get away without taking a hand from the hunter first. After the cutscene is over, you take control of the baby shark (do do do!) in the swamps of the gulf. There is now plenty of danger in the water to fear, at least until you become the danger.

Its time to close the. beach. #Maneater pic.twitter.com/XEWjbHI66W

When it comes to progression, the RPG in this “ShaRkPG” comes in it’s simplest form. You gain experience form completing quests, finding collectibles, defeating other creatures, and eating humans. Some upgrades and evolutions can be earned from completing particular tasks. With all of that comes different types of currencies you can use to upgrade those abilities. This system lends itself well to the game’s chaotic fun, but it falls short in some areas and has much more potential.

The three evolutions of bio-electric, bone, and shadow are fun to use and serve their purposes, but I would’ve liked to evolve into some other species variants such as a hammerhead or great white. I was also disappointed when I reached the max level of 40 known as “Mega” status; I grew only slightly bigger and wasn’t more massive than the enemy whales. It didn’t have to be as big as the one in The Meg movie, but I think it would’ve have been great to grow into the side of a Megaladon. I still did not feel like the apex predator.

Even though the progression was underwhelming, Maneater still had its hooks in me. It is easy to make comparisons to Grand Theft Auto as shark hunters will show up after you’ve caused enough chaos. The map is also an open sandbox with each area taking a specific theme with its own backstory. There is plenty to do in the world of Port Clovis with collectibles, sidequests, and Apex Predators to fight that scratch that completionist itch if you got one. Much like I did with Spider-Man on PS4, this is a game I can return to and check things off the list even though I have finished the main story.

The sidequests that are offered are usually activities you’ll find yourself doing in the world for fun anyway, such as attacking enemy sea creatures, taking down boats, and going to shore and eating people. You’ll be collecting nutrient boxes, license plates (clever Jaws reference), and landmarks, which are usually funny Easter eggs that reference other properties such as Spongebob, Titanic, and even Tripwire’s own Killing Floor Franchise. I saw that people were beating the game in about 10 hours over the launch weekend, but doing many of these activities got me around 20 hours of playtime.

Combat took me some time to get the hang of as I started as a pup and grew to a mega. I discovered that it was better to take on more of a dogfighting playstyle to get a few bites in and retreat, or get a successful tail whip hit and go in for a few more. I’m not a fan of the lock-on system as it is pretty loose and easy to lose my target. When I grew into a more powerful shark, I’d use my tail whip and send an enemy flying to pursue them to chew and thrash on them for extra damage.

My favorite moments in the game were when I would stir up enough mayhem for the hunters to come after me. I had fun dodging their laser sights as they would attempt to take shots at me. Most of the divers would meet their demise when coming into contact with my teeth; I’d breach onto their boat and drag them into “Davy Jones’ locker.”; other times, I’d ram and chew on their boat until it exploded. I would let these battles last until they were able to kill me. As my infamy rank rose, a named hunter would come after me—though they weren’t much more of a challenge then their lackeys.

The part of Maneater I am most impressed with the most is the story. While it’s not very deep, I didn’t expect that it would focus on the character of Scaley Pete as much as it did—events in the story change him into a different person than how we see him at the start. The reality show theme also shines in the presentation and creates an entertaining experience that would make Maneater a much different video game without it.

One last thing to note is that I played Maneater on my Xbox One X. During the game’s release, there were known bugs and issues in the PS4 version—such as people losing their save file. I personally did not counter any problems on my platform, but if you own the game on PS4, I recommend checking Tripwire’s forum for patches and hotfixes if you are concerned. From what I have seen, it seems like they have been working hard to fix everything they can.

Maneater is ultimately a great blend of parody and satire. It took the shark attack genre and dialed up the exaggeration to 11 while commenting on how terrible human beings can be through the eyes of a sea creature and a television camera. If it were built solely to be a gore and chaos festival, I would not have enjoyed it as much as I did. It is important to go into Maneater expecting a fun time rather than one of the best games of the year. How much you want out of this experience is ultimately up to you as the player, you can beat the story in a day or check everything off the completion list.

Maneater is neither a shallow, nor very deep experience, but provides some good fun that players can take a weekend to chew on.