I Don't Get to Pick and Choose When I'm Spider-Man

Marvel’s Spider-Man is without a doubt my favorite videogame of 2018 (sorry God of War fans but I haven’t gotten around to finishing that one yet). It did incredible justice to the character in just about every way a videogame could, boasting engaging gameplay and an amazing story that nearly brought me to tears with its ending. The game introduced Miles Morales as a side-character and showed the beginnings of his powers, setting up for him to play a larger role in future games. Like many others, I assumed that Miles was being built up for a sequel in which Peter Parker would still be the main character. However, Sony’s reveal of the PlayStation 5 also featured a teaser which announced that Miles was getting his own spinoff game also produced by Insomniac.

The fact that a Miles Morales videogame even exists is a significant cultural milestone. For the longest time, Miles Morales as a character lived in the shadow of Peter Parker. While he certainly had his fans, he was never at the same level of popularity as the original Spider-Man. The surprise hit of Spider-Man: Into the Spider-Verse brought mainstream attention—including my own—to the character, and he has since been included in more and more Spider-Man stories. What separates Miles from Peter is his perspective both as a young man and as someone from a multiracial background. Having a whole game centered on Miles lets the game give the player insight into Miles’ unique perspective on the world. Going into this game, I was excited to see how Insomniac would handle this character in his own story. 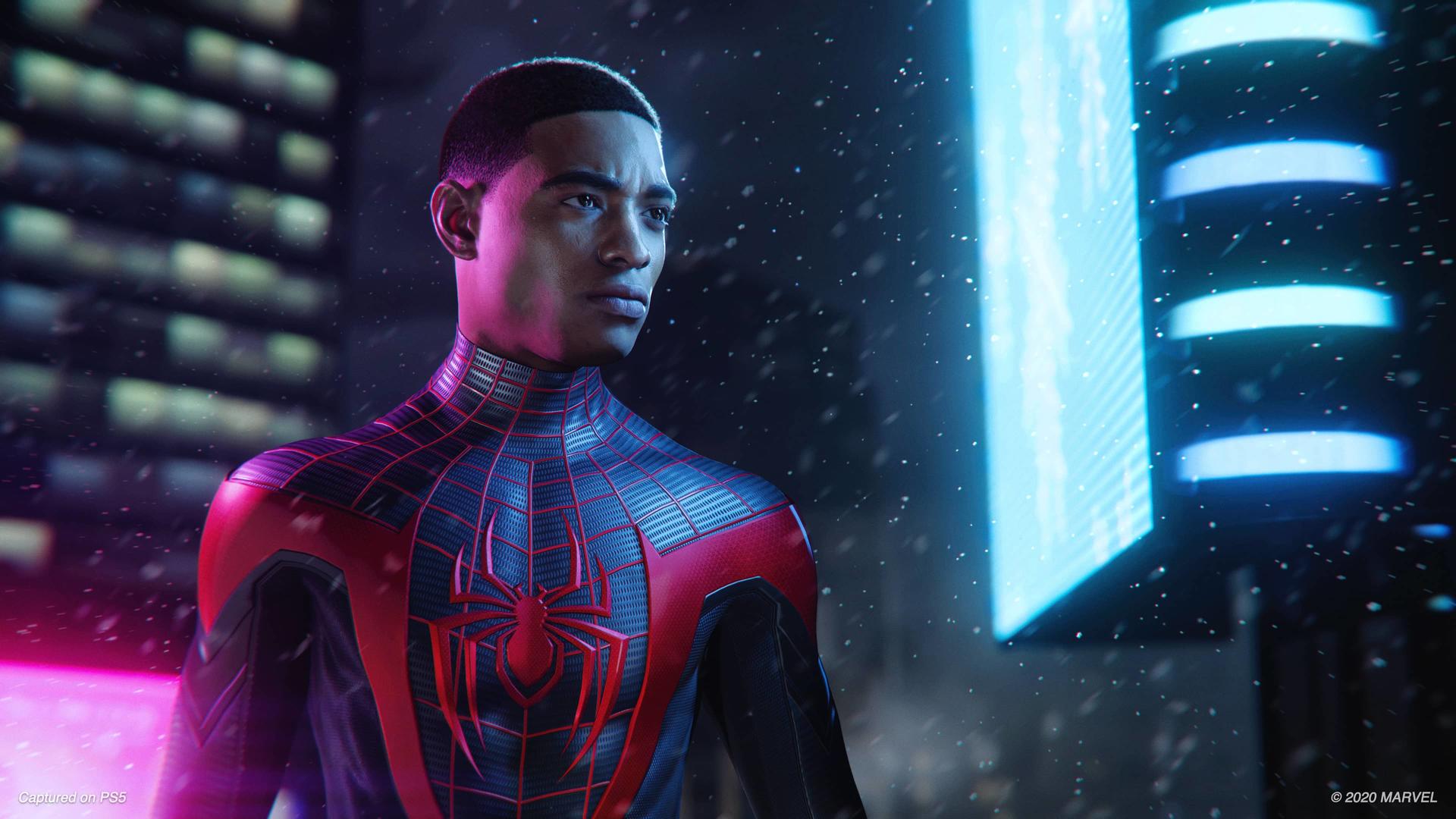 Violence: In short, none of the violence in this game exceeds the violence that was present in the first game. Enemies use a variety of guns and melee weapons to take down Spider-Man, while Spidey subdues his foes primarily with fists and kicks. Only small amounts of blood appear onscreen.

Sexual Content: The player can speak to a female side character who introduces Miles to her girlfriend. Miles briefly expresses a possible romantic interest in his lifelong friend Phin, and a female NPC flirts with Miles as Spider-Man.

Spiritual Content: Characters thank God in times of crisis. Trinity Church is a key location in the game.

Positive Themes: As with any good Spider-Man story, the theme of having a responsibility for those in need is at the forefront of the game. Miles Morales is an inspiring hero who loves his family and is motivated by a deep desire to protect others. Being part of a family and dealing with family conflict is central to the game’s story. Sacrificing oneself to save the ones you love is also advocated as the central quality of a hero. 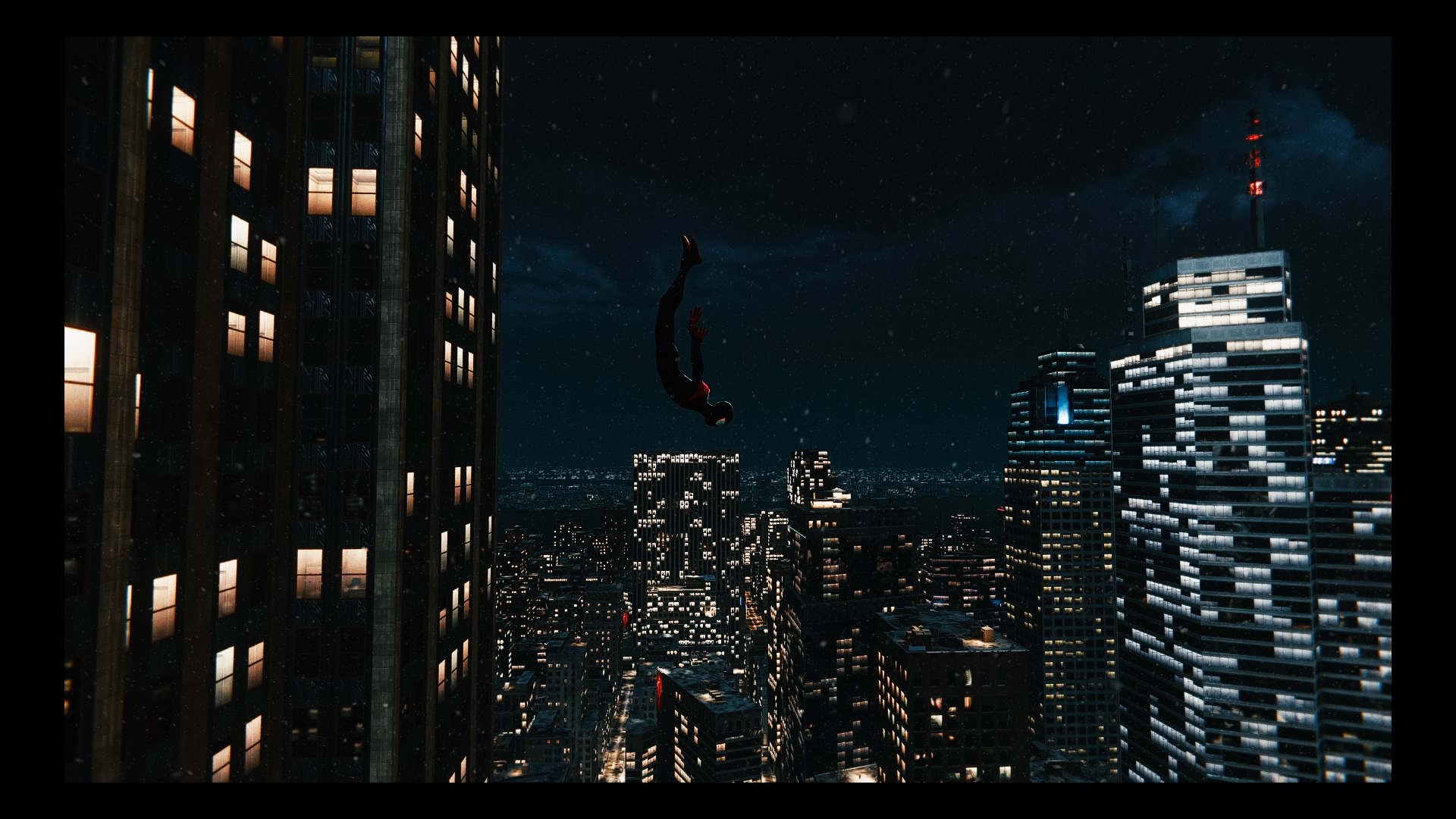 Trying my hardest to recapture that iconic shot from Into the Spider-Verse.

It should be noted upfront that I was not one of the fortunate individuals to get their hands on a PlayStation 5, so I purchased the game for the PlayStation 4. I can assure the many people waiting to buy a PS5 that the game performs very well on older hardware. From a graphical standpoint, Miles Morales is on-par with the first game. Objects in the game sport incredibly detailed textures and the use of motion-capture for the cutscenes fits in seamlessly. I did experience a few graphical glitches and delayed rendering of textures. However, these instances were not common and the developers are continuing to release updates for the game that may address these issues.

At its core, Miles Morales features the same open-world gameplay as the first Insomniac Spider-Man title, requiring the player to complete various missions in order to advance the story. The missions generally revolve around defeating enemies, sneaking around areas, and solving some simple puzzles. The game does take away a lot of the gadgets that the player could use in the first game, however, Miles Morales makes up for this by adding new powers that are unique to Miles. Unlike Peter Parker, Miles has the ability to generate bio-electricity called “venom” which the player can use to defeat enemies and power up generators. Miles’ venom abilities make the combat feel a bit more fast-paced and chaotic than the first game, as these abilities allow him to take on a greater number of foes at once. Miles also has the ability to temporarily turn invisible, which is very helpful for stealth missions as well as escaping enemies. These abilities really enhance the already solid gameplay and also help give it its own identity distinct from the first game. 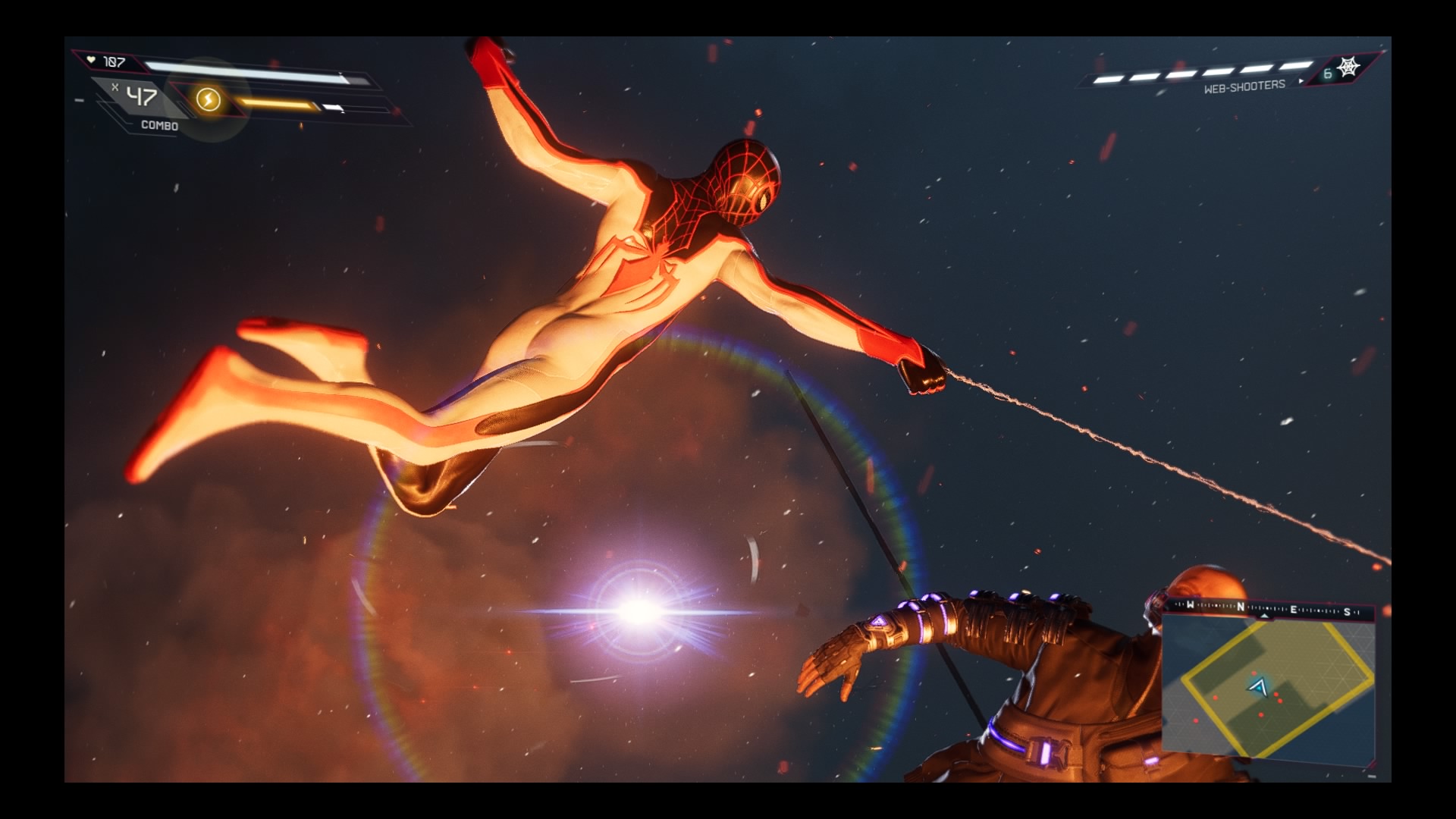 Taking out enemies with a combo-finisher is always satisfying.

One of the weakest aspects of the previous Spider-Man game was the Mary Jane and Miles Morales (pre-spider bite) segments which had the player sneaking around a series of enemies to reach a goal. In this game, however, the player only ever controls Miles, which helps keep the gameplay fresh and focused. There are a couple sections that have the player interacting with people as Miles outside of the Spider-Man suit. While they lack excitement, these sequences smooth out the pacing of the game as well as fully flesh out Miles as a character.

Unfortunately, Miles Morales fails to avoid one of the flaws of the first game: the puzzle sections. The first game has you perform computer work involving placing circuits in a specific order. While simple to solve, these puzzles quickly became tedious and unengaging. Instead of computer work, Miles Morales get to swing around New York picking up sound samples around the city to make a mixtape. Like the first game, these puzzles are generally simple to solve, but there are a lot of them. They aren’t very fun to complete and getting stuck on one can be frustrating. They generally come across as busywork intended to extend the time needed to fully complete the game. 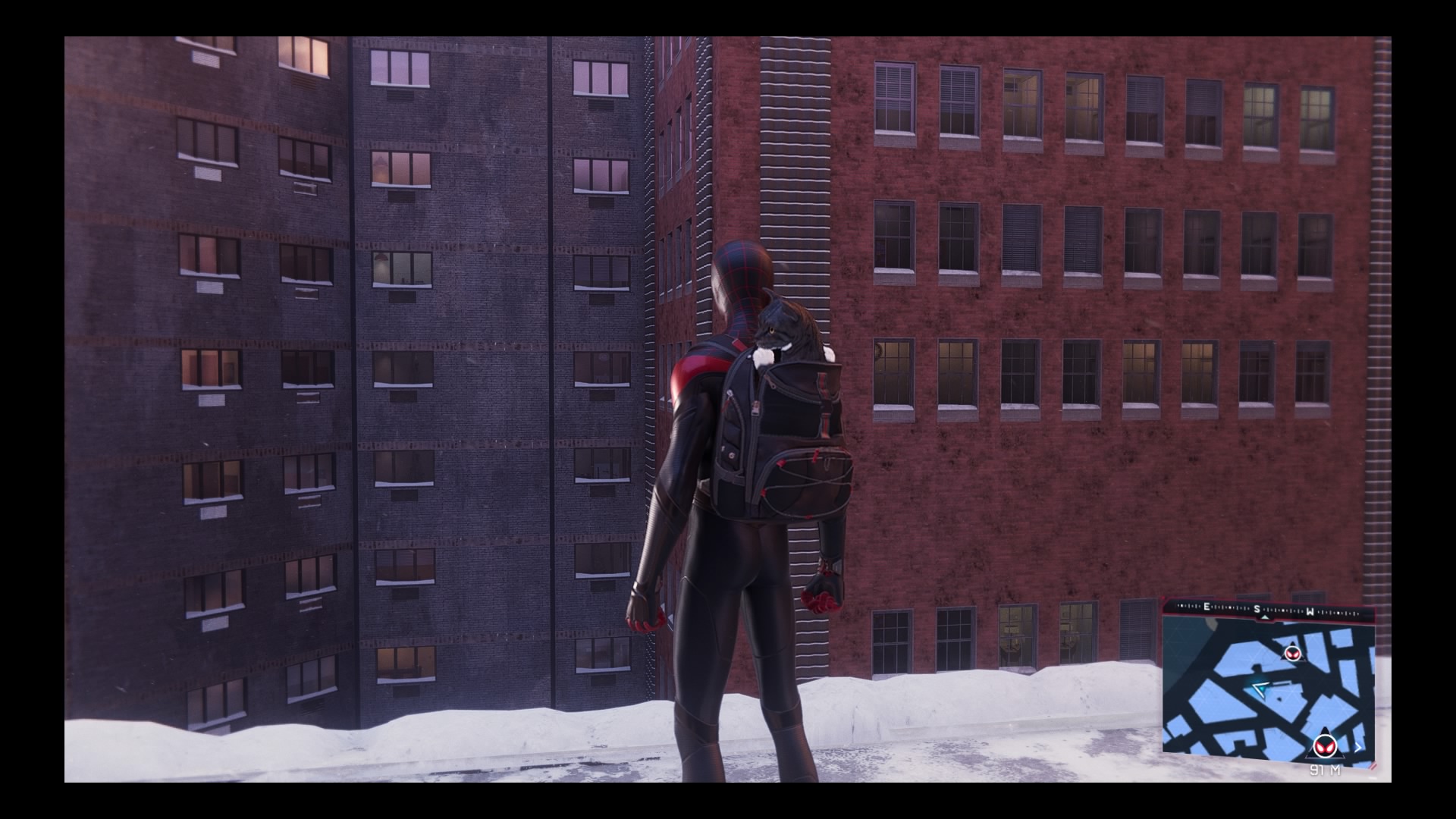 Saving a lost cat is superhero 101.

Despite these flaws, the gameplay of Miles Morales is ultimately just as strong as that of the first game. It polishes the core mechanics of the first game while also adding enough new features to keep it fresh and unique. 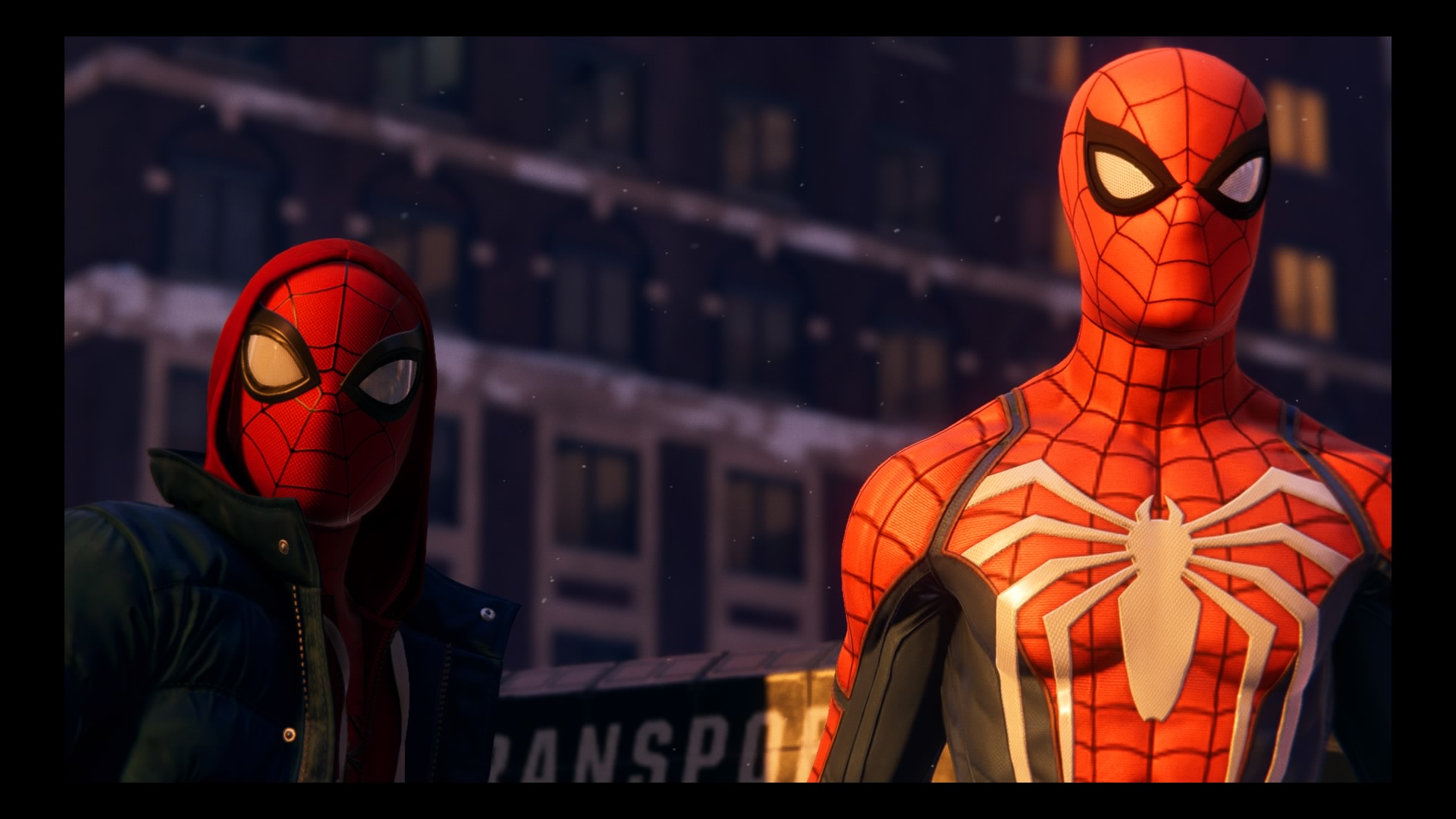 On top of the excellent gameplay, the story of Marvel’s Spider-Man really endeared audiences to this version of the classic character. Miles‘s story holds up as part of this universe, taking place not too long after the events of the first game as Miles learning the ropes of being Spider-Man and watches over New York City after Peter Parker gets called away to Europe with Mary Jane.

The story is less of a sequel to Marvel’s Spider-Man and more of a side-story within the Insomniac Spider-Man universe. The number of characters and the stakes of the plot are scaled down from the first game, but this isn’t a criticism. The smaller scale of the story, along with a villain focused solely on Harlem rather than the entirety of New York City, makes it feel a bit more intimate in regard to Miles and his connection to the people of Harlem. It also separates him from Peter Parker. Peter may be the Spider-Man for all of New York, but Miles is the Spider-Man for Harlem. 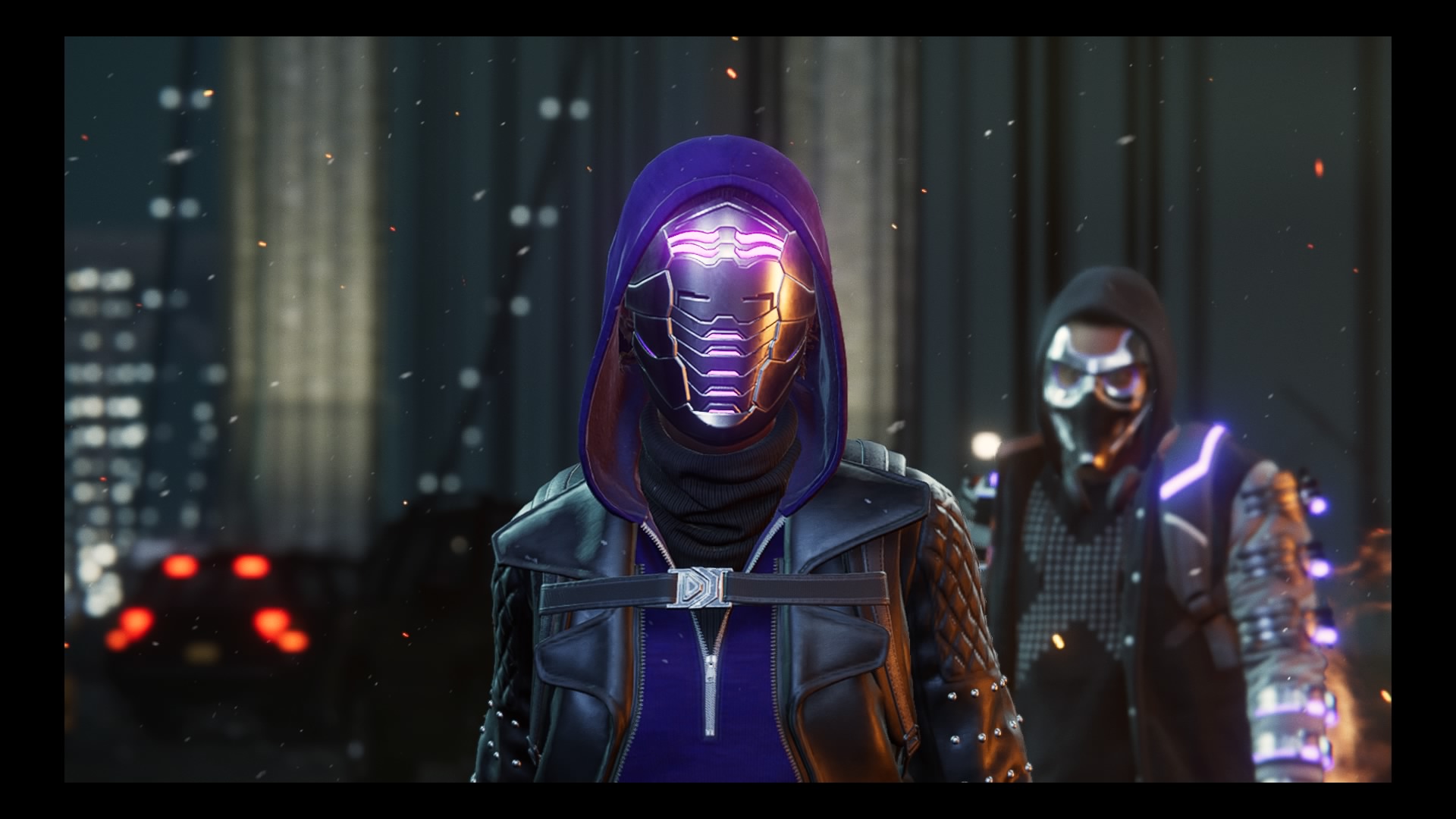 A very different take on the Tinkerer, but easily the most compelling version of the character.

Without spoiling anything, the game aptly endears you to Miles as a character and making him feel distinct from Peter Parker. This version of Miles is seventeen years old and the tone is consistent with his age. The story as a whole is strong, but not without missteps. Simon Krieger is a pretty one-note antagonist, acting as a typical evil businessman who would do anything to make a quick buck. Even as cookie-cutter comic-book villains go, Krieger is pretty boring. Thankfully, he is not the central antagonist of the game and rather serves as an obstacle to help advance the plot.

The conflict centers on the Tinkerer who, like the best of Spider-Man’s villains, is given a sympathetic backstory and motive but uses unscrupulous means to achieve their goals. The radical change in design and backstory may be jarring for some players, but for me it is a welcome improvement to a character that didn’t have any depth to begin with. The Tinkerer is a good antagonist especially considering that Miles doesn’t have an iconic rogues gallery like Peter Parker. All of this leads to a thrilling cinematic boss battle with an emotional conclusion that leaves a lasting impact. 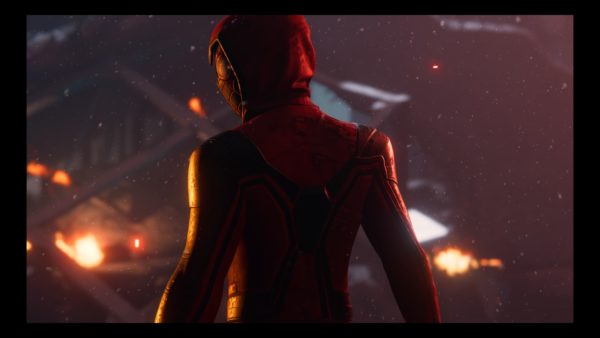 My biggest issue with the game’s story is its length. While I knew going in that the main story was going to be shorter than Spider-Man PS4, I couldn’t help but feel that something was missing. There are several emotional moments in the game that could have been made more impactful if we as the player had gotten to spend a little more time with the characters involved. A couple more side-missions or even cutscenes focused on Miles’ relationship to his family and the main villain also would have improved the story. Overall, though, the story is on par with many great superhero films; it just could have used a little more time in the oven. 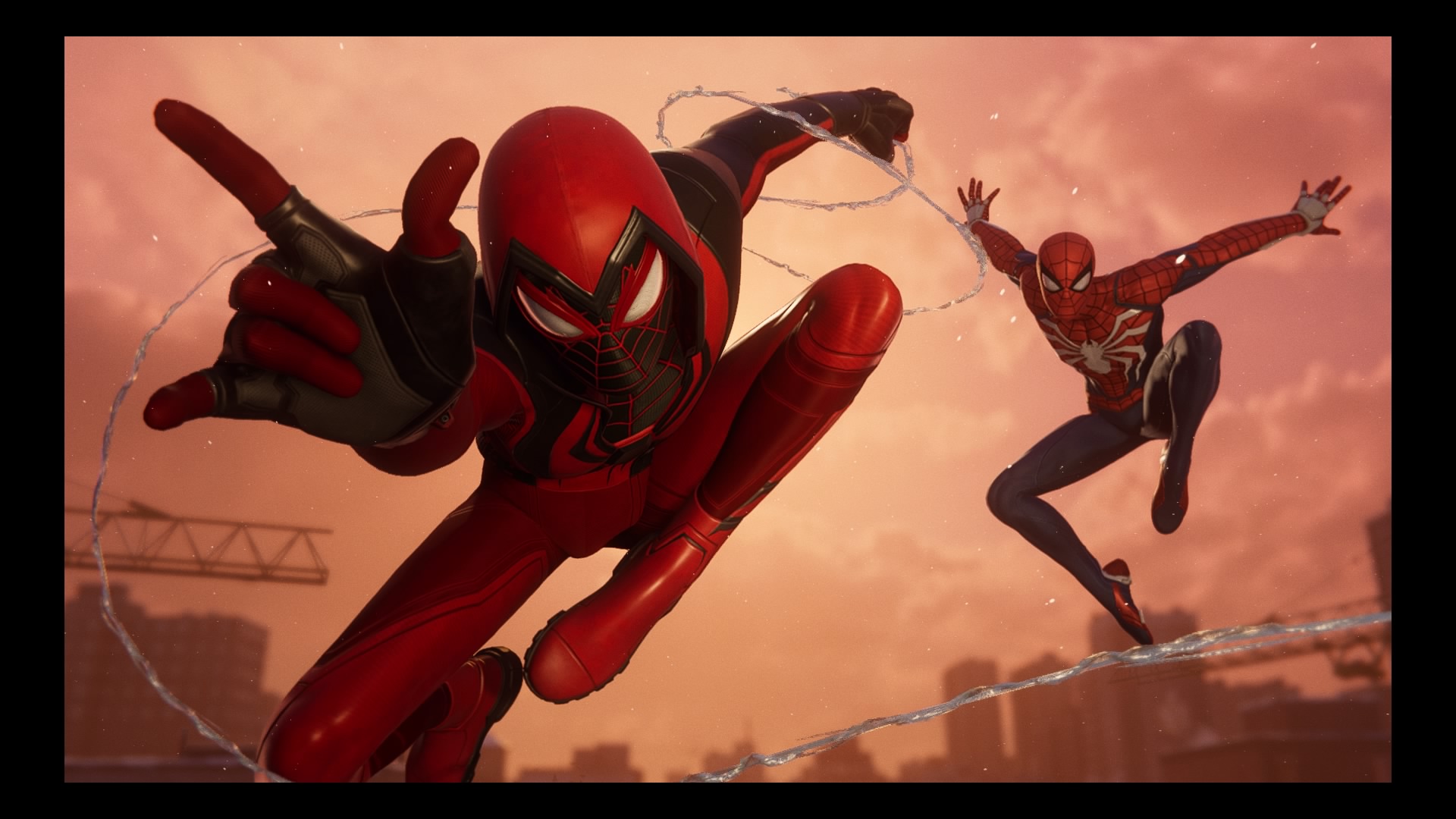 I think this image speaks for itself.

“I don’t get to pick and choose when I’m Spider-Man.”  This is easily my favorite line from the game and encapsulates the character of Miles perfectly. His charm and willingness to sacrifice himself for others make this a solid Spider-Man story.  Its open-world gameplay is as exhilerating as the first game, and the heartfelt story is sure to please Miles fans. If you enjoyed the first Insomniac Spider-Man game, then you will certainly enjoy this game as well. After playing it, I can’t wait to see what Insomniac has up its sleeve next for their versions of New York’s two Spider-Men.

While not as long or immersive as its predecessor, Spider-Man: Miles Morales is a strong entry in what promises to be an excellent franchise worthy of the Spider-Man name.