That Goose is Loose!

Richard Lems might not have considered that he would be following the footsteps of video game development savants such as Thomas Happ, Johnathan Blow, or Notch, but he had to begin somewhere. After developing video games over the past decade, in 2020, Lems decided to pursue his lifelong dream of becoming a full-time developer, launching his developer brand, Blastmode, alongside a Patreon announcement that his (company’s) first video game would be Mighty Goose. The Patreon page chronicles Lems’ struggles of an indie game dev, as well as the highlights, such as the process of acquiring publisher PLAYISM, and enlisting MP2 Games to port Mighty Goose to consoles. In the end, all that matters is whether or not his first video game is worth all the hassle. 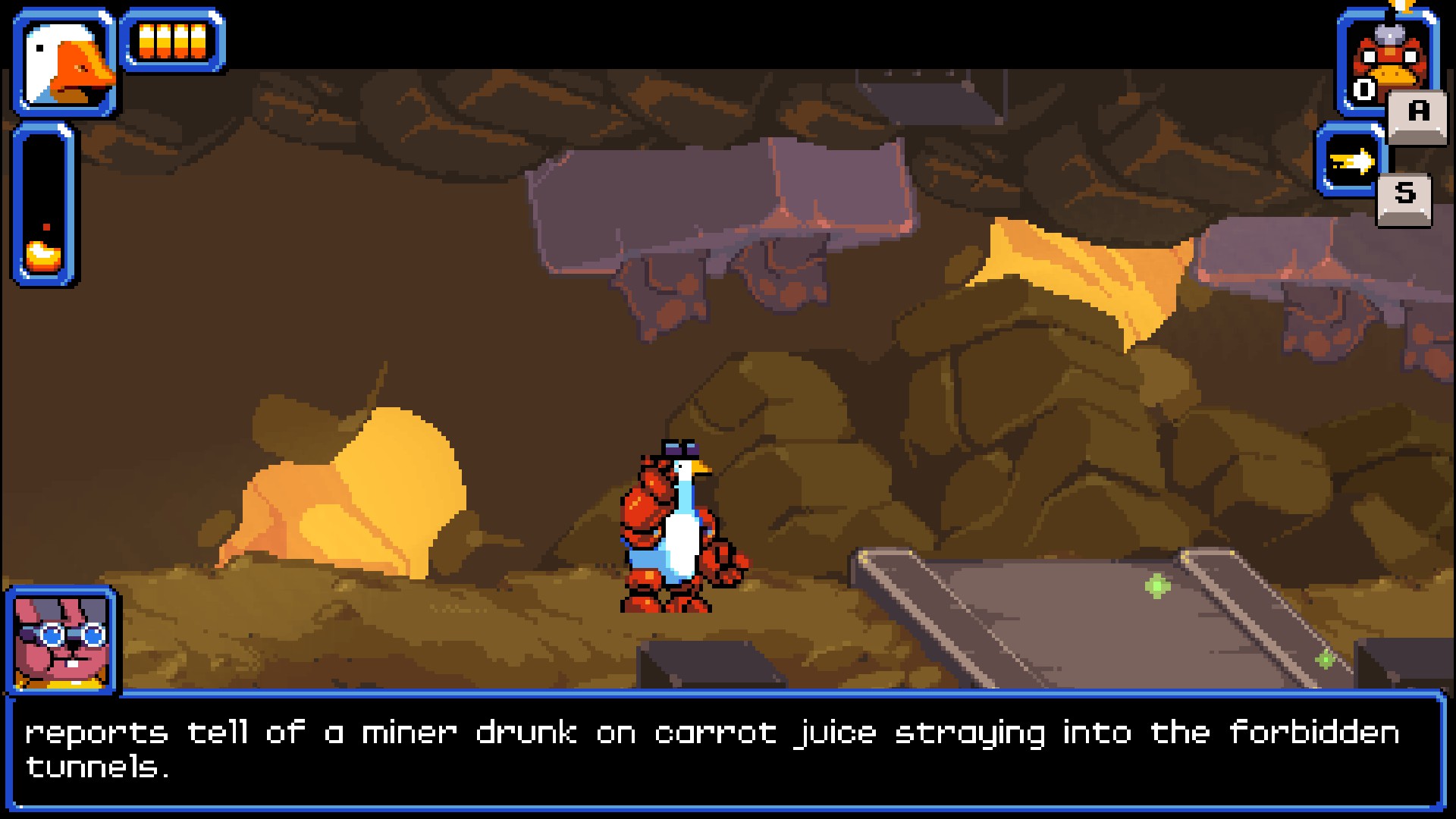 Must be the strongest carrot juice in the universe.

Upon defeat, some enemies explode into fragments of armor, often including red flakes that simulate the illusion of blood despite their incongruent physics. Later, certain enemies leave behind bone fragments upon their defeat. 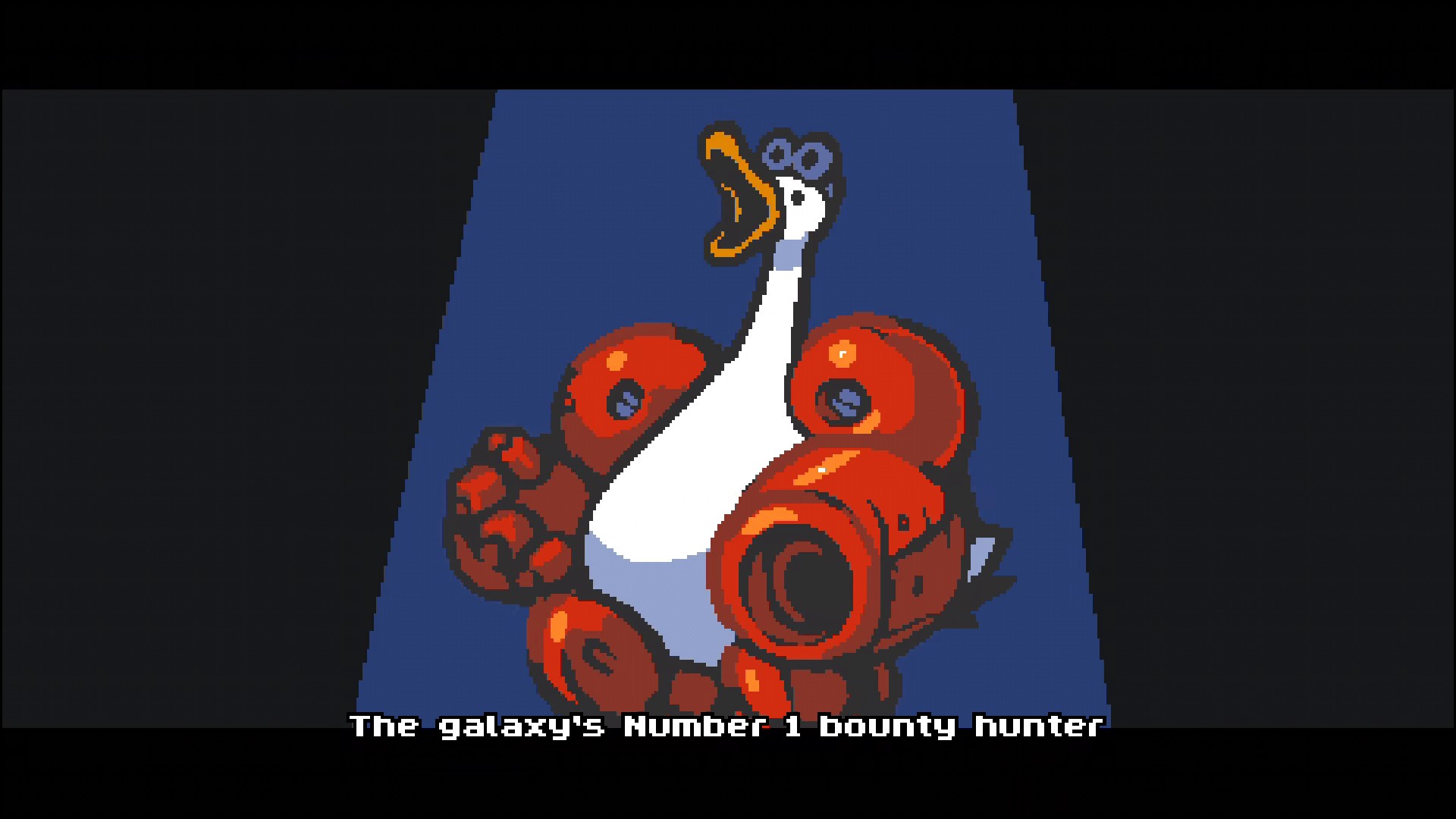 This is so totally NOT a Vaira suit.

Whereas I usually require a plot compelling enough to warrant completion of the video games that I play, shooters are an exception as by design, we play shooters to…shoot…things. Nevertheless, the titular personification of fowl in Mighty Goose is a galactic bounty hunter whose mission entails overthrowing the Void King. A close look at Mighty Goose paired with its occupation should bring a smile to the faces of fans who favor Chozo armor. I am not sure if Mighty Goose’s goose-shaped spacecraft is armed like Samus’ gunship, but I doubt that Lems could create stronger parallels. While players eventually unlock a double jump and a charged shot among other skills, Mighty Goose plays less like Mega Man and more like Metal Slug. 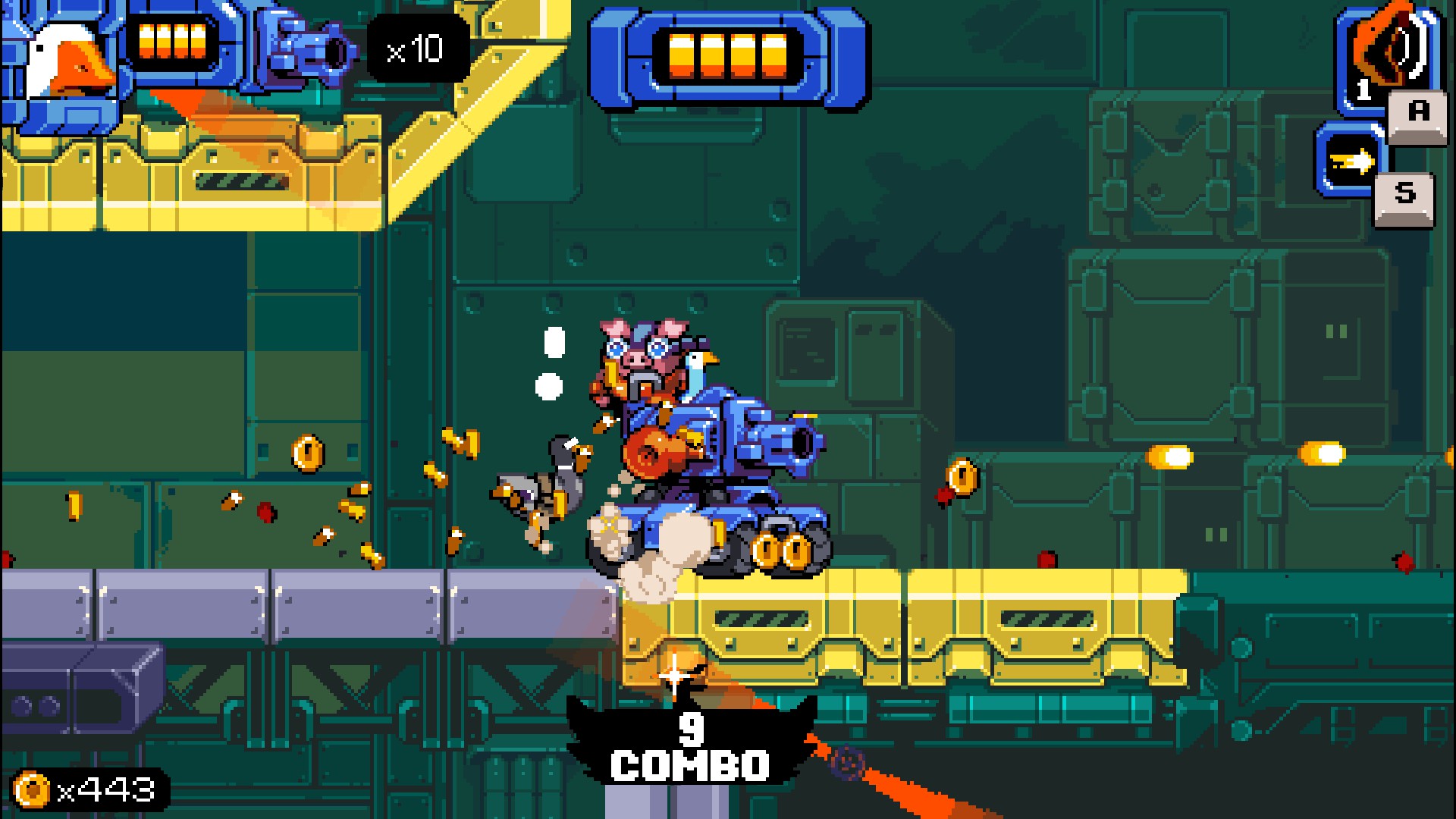 This is TOTALLY a Metal Slug. And yes, there are other fun vehicle segments, too.

Lems’ free-spirited approach to thematics in Mighty Goose enhances its unmistakably indie flavor, and the main ingredient in this recipe is fun. Feedback from the basic gun in terms of rate of fire and damage feels good enough to hold over until the game awards its first power-up in the form of a machine gun; subsequently, the machine gun feels like the default weapon, where the default weapon then becomes a form of punishment for failing to secure ammunition, a new type of special weapon, or death. For the latter is not a punishment in and of itself as one has infinite lives. 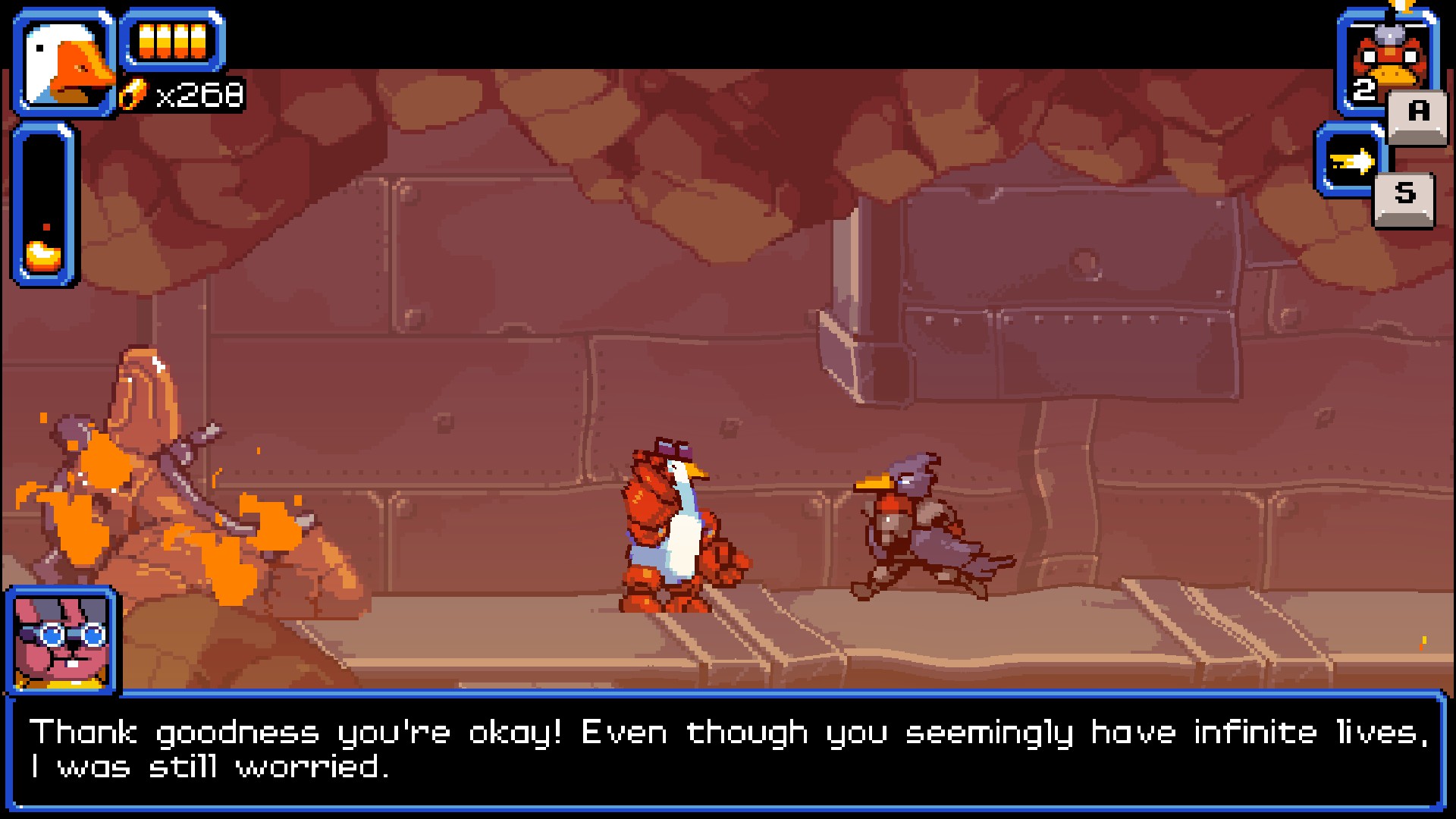 I enjoy a good meta-joke.

Thankfully, the game is generous. Players will rarely be without a weapon of mass destruction. The shotgun, missile launcher, and my favorite, the tesla gun, all contribute to screen-clearing mayhem. Additionally, those who maintain their combo streaks by dealing damage and dodging incoming fire with the roll button will fill their meter. When full, Mighty Goose can go into rage mode, gaining limited invulnerability and a giga-boost to firepower. While active, the machine gun spawns bullet hell and the shotgun fires like a cannon. Unfortunately, I cannot tell if the missile launcher and tesla gun change at all, so this mode is best activated when using low-tech weapons. 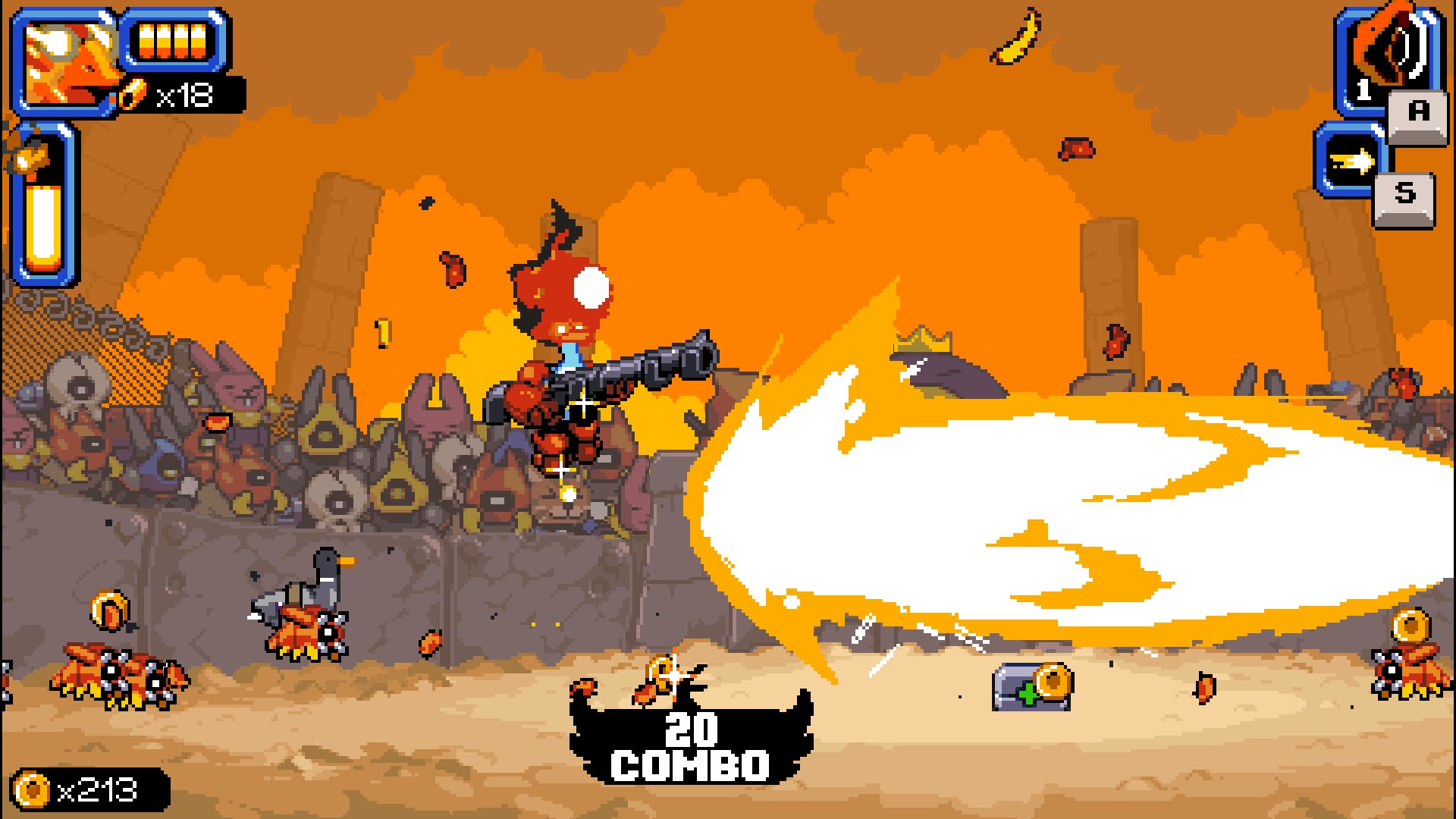 I love the weapon feedback while in metered mode.

Do not be fooled by Mighty Goose’s reductive, almost two-frame walking animation. While not at the level of Studio MDHR’s Cuphead, Mighty Goose boasts considerable visual details, displaying effervescence with every enemy encounter through what appears to be a 16-bit filter. Though the number of foes in this game is limited, the game throws them at players in quantities such that one will hardly notice. Bosses are the special treat that they should be, threatening with their multiple phases and attack patterns that are a delight to learn and conquer. My favorite, which I have yet to figure out how to defeat flawlessly, is a Mad Max-inspired dune buggy of doom. 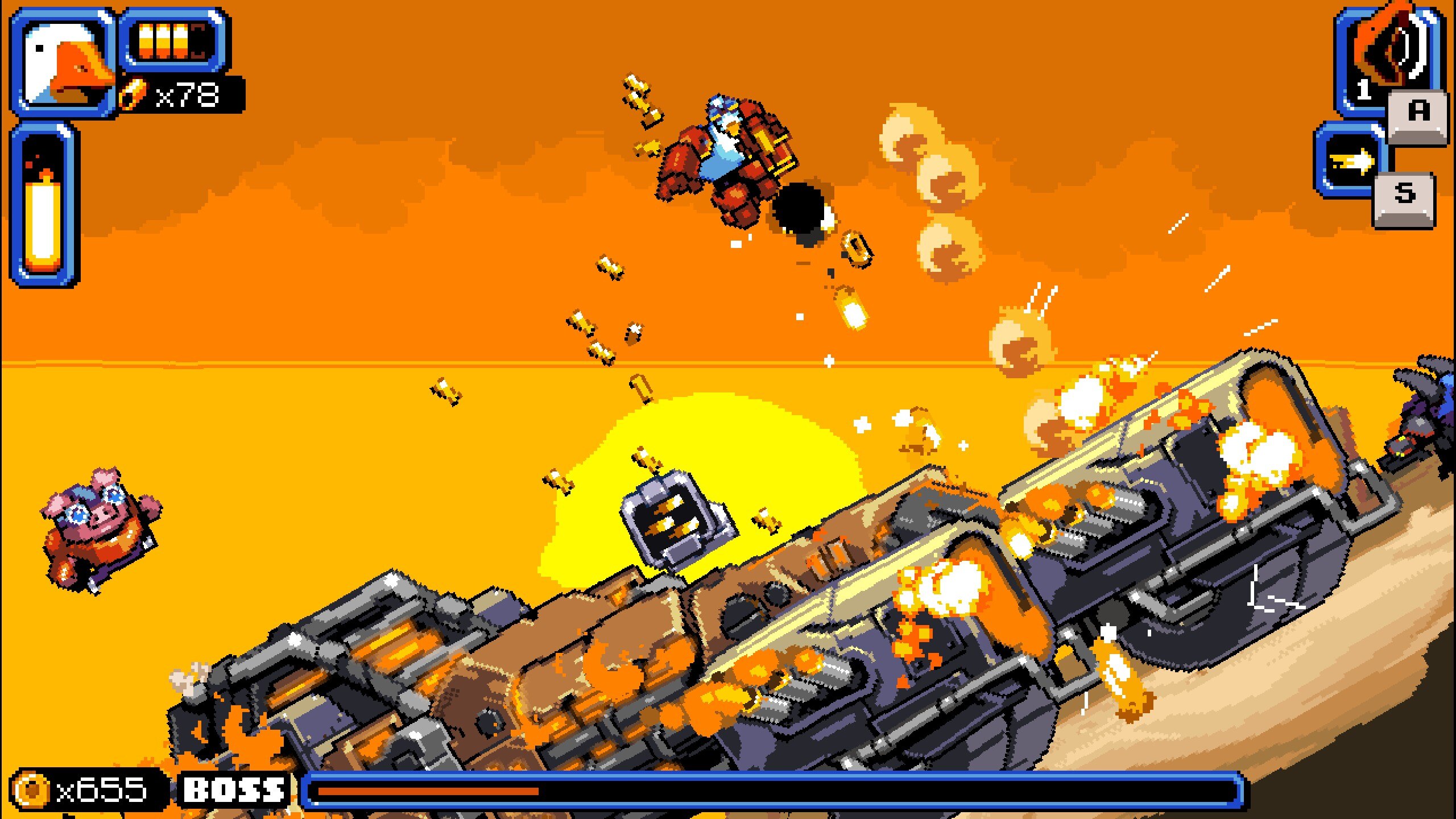 I am still trying to figure out how to S-class this boss.

And right when the enemy confrontations in Mighty Goose began to get easier, and the percentage completion indicator on the map selection screen began to approach closer to 100% faster than I would like, well, I will simply say that there is more to the game than it would at first seem! How appropriate that a video game likely inspired by the nonsensical mayhem of Untitled Goose Game would offer more than meets the eye in a spoofy way! 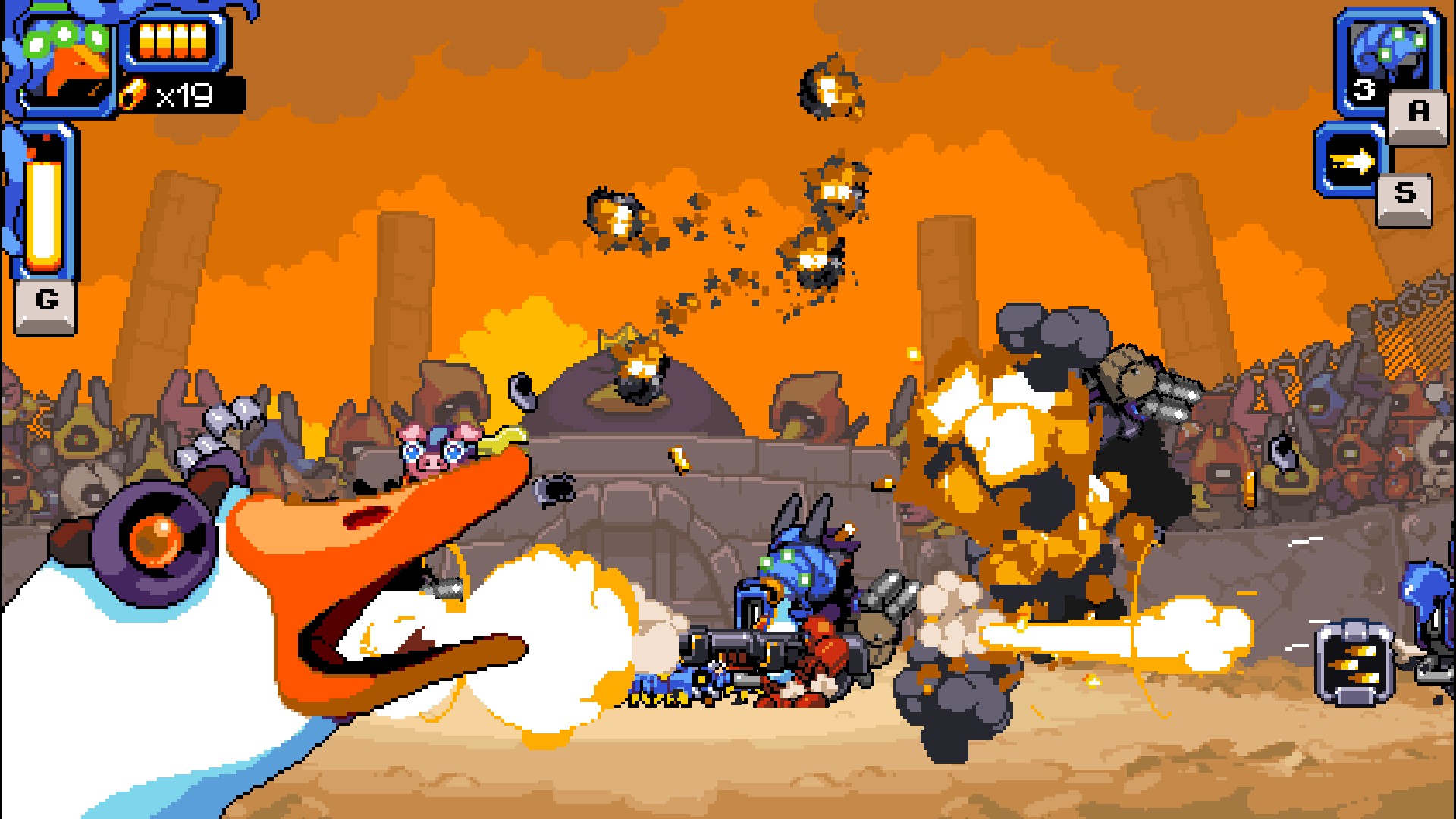 I do not know what triggers the slow-mo or the mayhem goose to appear on the screen, but it is a silly feature that just exists in the game for fun, and I love it!

Mighty Goose is the best side-scrolling run-n-gun games I have played since Guns, Gore, and Cannoli. Suffice to say, Lems’ first project as an indie developer is a success, and I look forward to whatever he dares to work on in the future.

Mighty Goose is a great reminder that video games need not take themselves too seriously to be fun.