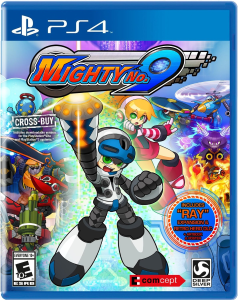 In recent years, longtime Mega Man fans have been itching for a new adventure full of robot masters to outwit. Though we received a couple last generation, the well had seemingly dried up so when news got out that series’ creator Keiji Inafune had left Capcom to pursue his own Mega Man-styled game, fans were all over it. Now, after multiple Kickstarter campaigns, a menagerie of delays, and other issues, Mighty No. 9 is out. Can it live up to expectations or has the fuse been soaking to long to hold a flame?

The game’s eight bosses show clear signs that they’re struggling to be good but that the virus in their software is forcing them to do bad things. Call (Beck’s robotic sister) also mentions at one point that her brother is clearly hesitant to use violence as a solution where she feels no remorse for it. Apart from that, there’s no real inherent spiritual content in Mighty No. 9.

The game is full of firing bullets and lasers. There is no gore or viscera, as robotic enemies break apart and explode. The game is totally safe for children to enjoy. 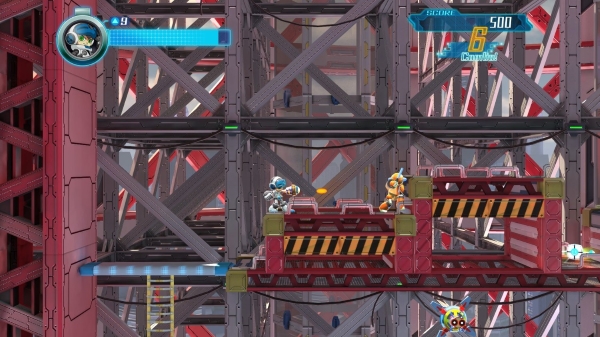 The standard formula is still here

While the game is pretty fond of terrible puns (I’m looking at you with your ice puns, Cryo!) they did a good job keeping virtually every aspect of this game safe for gamers of all ages. There’s nothing in here you wouldn’t be comfortable with on a Saturday morning episode of The Teenage Mutant Ninja Turtles. In fact, Turtles is full of jabs at opponents where those are even relatively toned down and rare here.

There is no sexual content in the game. Mighty No. 9 is totally safe for small eyes.

As mentioned in the spiritual section, there’s a clear struggle inside each of the “Mighties” you’ll face. Before being infected, they were all clearly friends with our protagonist and some of that struggle shines through inside the stages. After you defeat each boss, they kind of wake out of their stupor and thank you for helping them out. 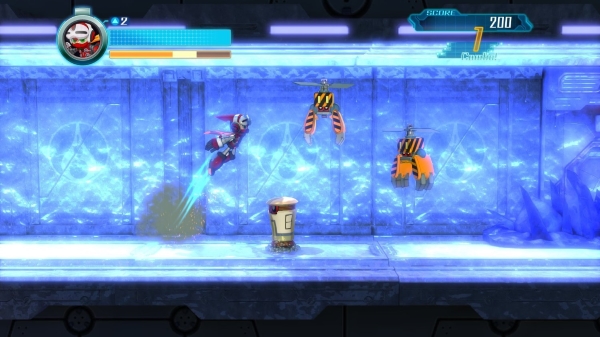 Each level adheres to a theme, but they’re not all fun or interesting.

Let’s first address what everyone is really wanting to know. Is Mighty No. 9 a Mega Man game? Well yes…and no. You’re still a boy robot, you still jump and shoot on a 2-D plane, and you’ll still fight through eight stages and face off with a robot master at the end, but Mighty No. 9 would never be openly welcomed to family reunions.

If imitation is the sincerest form of flattery, Mega Man fans should feel exalted. Instead of a sincere take on the formula, however, Mighty No. 9 feels like the bulk of its Kickstarter funds were spent toeing the line just enough to keep Capcom’s legal team at bay. Instead of Rockman and Roll (the Japanese name for Mega Man and his sister), we get Beck and Call. Mega Man‘s Dr. Light has been given a younger, snobbier counterpart named Dr. White. They even went so far as to ape Zero from the Mega Man X series into a DLC character with similar stylings named Ray. What I believe was originally meant to be homage has come away feeling like a cheap knockoff. I’m not sure if Inafune was trying to concede to fans or if his creativity tank is just drained. 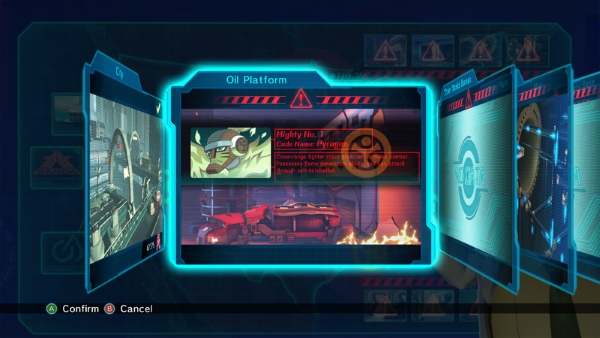 Stage selection has lost a lot of Mega Man’s flare

For all of the cheap mimicry, there genuinely is fun to be had with Mighty No. 9. While Mighty takes the large portion of its gameplay mechanics from Capcom’s Blue Bomber, it does break some new ground and the result feels pretty good. Yes, you’re still running and shooting, but the addition of the dash maneuver drastically affecting gameplay throws its own unique twist in there. Where Mega Man blows up his foes and moves on, Beck shuts them down and can then dash into them for various boosts or to build up one of two restoration tanks (think Mega Man‘s E Tank) that can be accessed from the pause menu at any time. The dash mechanic actually figures quite heavily into the boss battles as well, as you’ll have to wound them and dash to prevent them from regenerating health. All told, it’s actually a really solid mechanic that’s fun to play around with and it will make speed running a blast.

I genuinely do enjoy the gameplay aspect of the game. That said, there are a few sincere issues with the game beyond its imitation. Stage design is inconsistent. Some of the levels are fun and interesting, while others feel bland and bromidic. Some of the stages’ reliance on one-hit-kill surfaces can prove infuriating as well. On top of that, boss battles feel horribly inconsistent as well. Some are challenging, requiring you to master the boss’s attack patterns, while others require virtually no effort to walk through. It’s frustrating because you can see glimpses of what made the Mega Man games so beloved shine through briefly before being enveloped in the fog of poor design choices. 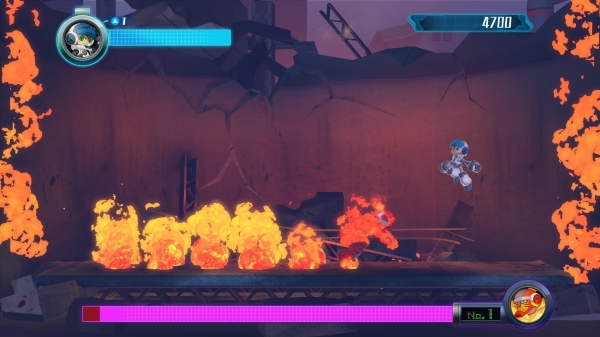 Boss fights range from fun and frustrating to downright boring.

Beyond the standard playthrough of the game, there’s a considerable trove of additional content. They’ve even added online and local multiplayer (though it’s locked until you beat the game). Fans of the core game will have a good time trying to conquer all the extras they’ve packed in, too. Speed running actually feels viable to folks who’ve beaten the game, for example. On top of that, there’s DLC for another character named Ray that will let you play the entire game in a completely different style. The problem I have with Ray is that while backers get it for free, it’s going to cost everyone else $5 and, honestly, it should have been packed in for everyone.

Though I touched on it in passing earlier, let’s address the game’s story. We know Mega Man‘s classic formula: an evil scientist builds eight robots to do his evil bidding and our hero, the android son of a good scientist, must defeat everything and restore order. With Mighty No. 9, a mega corporation named CherryDyn blames Dr. Blackwell, a scientist who’s locked away in a high security prison. Dr. White, now working for SANDA Technologies, sends Beck in to conquer the eight infected robots and bring them back to their senses. On paper, it’s not much different than your standard Mega Man narrative. There are some things worth noting, however. The voice acting is almost universally bad. Dr. White and his companion, Dr. Sanda, feel particularly horrible though. Sanda is completely over the top where Dr. White feels aloof and nonchalant. I understand they had a limited budget, but this is pretty rough. 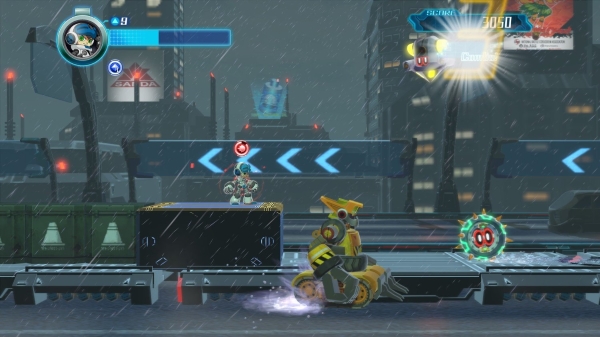 Variety is the spice of life.

While I’ve touched on how poor the voice acting is, we really should address the rest of the game’s presentation. The game looks decent. That said, nothing about it really stands out. The boss designs pack some variety and the colors are bright and fun, but that’s really the only thing notable about the visuals. Beyond that, the game’s soundtrack is actually pretty forgetful. I’m a huge  fan of game soundtracks and not one single tune caught my attention in over a dozen hours with the game. It’s there and it’s serviceable, but there’s nothing special about it. I also feel it’s worth noting the trailer released for the game is a contender for worst game trailer ever.

When it’s all said and done, I enjoyed my dozen-or-so hours with Mighty No. 9 but I still feel like it falls short of its lofty promises. The game is attempting to stand on the shoulders of a giant it can’t touch. Level design is inconsistent and frustrating, the aesthetics are relatively forgettable, and the voice acting laughable. That said, the core gameplay mechanics are fun. There’s definitely a glimmer of what could have been buried under the surface. I would love to see a sequel with some of the issues worked out. If you’re interested in this, maybe wait until the price drops drastically or check out 20XX. 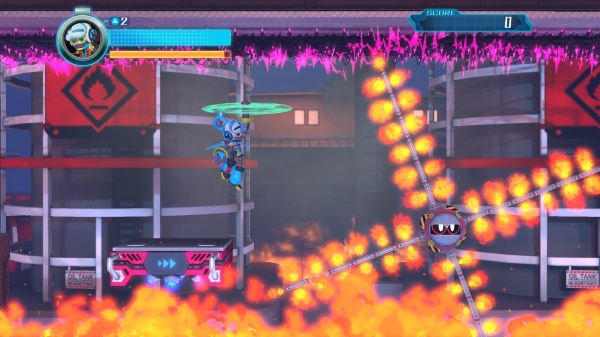 Mighty No. 9 does have some fun, challenging levels buried under the rubble.

Mighty No. 9 is a decent platformer dragged down by some poor design decisions. While it doesn't stand up to the giants on whose shoulders it attempts to stand, there is fun to be had here. If you're a fan of its predecessor, Mega Man, you'll likely find yourself disappointed.