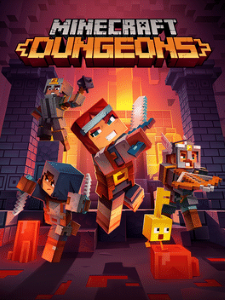 Mojang’s title, Minecraft, is arguably one of the most recognizable and beloved games of all time. With Minecraft Dungeons, Mojang departs from their classic formula for new ground in the action RPG space. What we’ve gotten is a fun game with plenty of depth, but it may ultimately miss the heart of the franchise fans are pining for. 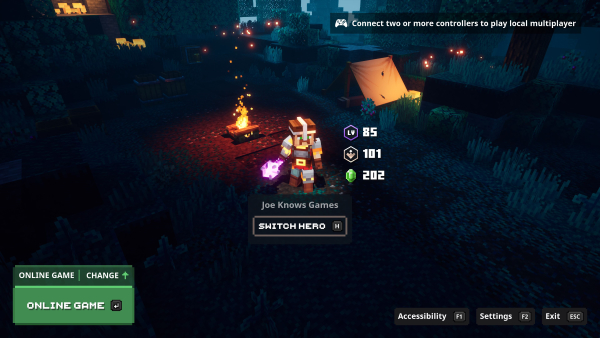 Violence: There is some mild cartoon violence, but like Minecraft, enemies just fall and fade when killed. 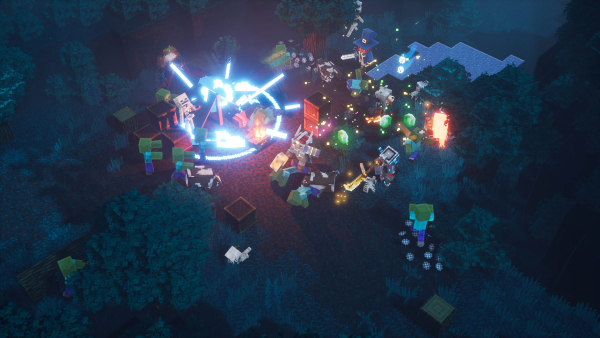 Drugs and Alcohol: There is no use of narcotics or alcohol to be concerned with.

Language/Crude Humor: There is no foul language to be concerned about.

Positive Themes: The story actually has sort of a sad theme running with the Arch-Illager that pays off in an endearing way. 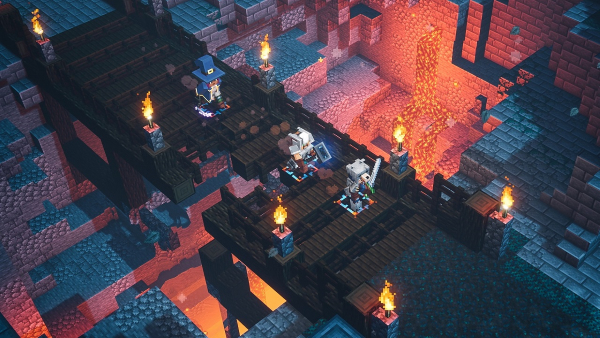 A disenfranchised illager known as Archie has found the Orb of Dominance. Now, after being cast aside, the Arch-Illager has taken his powers and twisted evil forces to his will to exact revenge. It’s up to you (and any friends you bring along) to travel through each region of Minecraft, quelling Archie’s influence to return the world to its rightful state.

While the story is fairly straightforward, it’s surprisingly sad and endearing in a way I wasn’t expecting an action RPG to be. Archie just wants to fit in, and to see him cast aside by what are supposed to be the good people of the land makes his quest for vengeance feel justified, particularly with the events of the Western world in this day and age. While the tale of the Arch-Illager is ultimately just fodder to set up the narrative and deliver some payoff, it actually kind of hit me in the feels. Sadly, beyond a couple of prescient narrative points, the tale just doesn’t exist. Still, points to Mojang for their willingness to engage something that should strike all of us at a primal level. 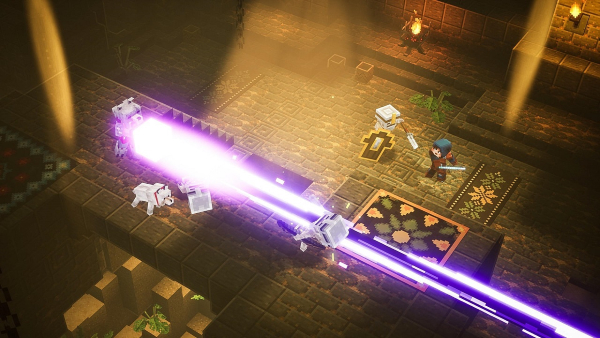 While many coming to Minecraft Dungeons are likely expecting more Minecraft influence like craftable items and destructible environments, the game is ultimately just a Minecraft-themed Diablo clone. They do a few things in their own way to keep it unique, but the game will ultimately appeal to those of us who enjoy a nice isometric loot-driven click-a-thon.

Fans of the genre have probably come to expect a class-based system, but Minecraft Dungeons eschews locked-in archetypes in favor of letting your equipment dictate your skills, much like other recent action RPG Wolcen: Lords of Mayhem. Unlike Wolcen, though, your weaponry isn’t part of that equation. You’ll get slots for a melee weapon, a ranged weapon, a suit of armor, and three artifacts. Your usable skills will come from the artifacts you have equipped, while your attack, defense, and any status skills (like stun or freezing damage) will come from enchantments you can upgrade from each piece of gear. 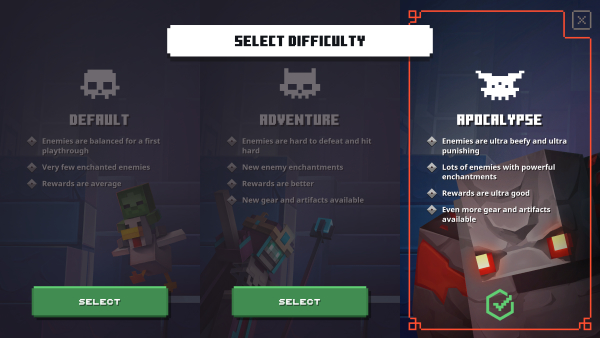 Each item is given a power level. Like Destiny 2, your overall power level is an average of all your items’ power. For better or worse, this can turn the high-level end-game into a pretty serious loot grind. As you level up, you’re granted enchantment points to build out the gear you earn. Unfortunately, that’s really the only benefit you gain for grinding.

On the default difficulty, the campaign can be played through in a matter of 5-7 hours. That’s turned a lot of people off, but the real value of Minecraft Dungeons, I would argue, is in tackling the game on its subsequent difficulties—Adventure and Apocalypse—which only unlock when you clear the previous difficulty. These newer difficulties keep your character’s progress while making everything more difficult, ultimately rewarding the players with better loot (some of which is locked in easier difficulties) and new foes. This would, in my opinion, make Apocalypse difficulty the most satisfying way to play Minecraft Dungeons. While it’s possible to experience the whole story in that first 5-hour playthrough, you won’t truly get what Dungeons has to offer unless you come back for seconds or thirds. 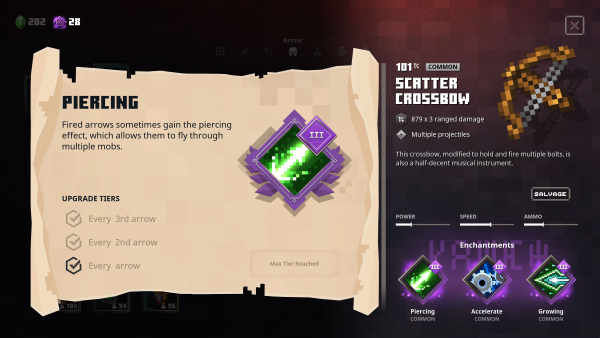 While I enjoyed my 40 or so hours with Minecraft Dungeons, there are some core gameplay issues that got on my nerves a bit. The most notable is that enemies can hit you through walls. That includes creepers, which do 80-90% damage if they catch you in a blast. In a dungeon full of tight corridors, it can be infuriating when a creeper in the adjacent hallway aggros you and kills you through a wall. There were also a host of other bugs I encountered, though several patches have been released to resolve those. 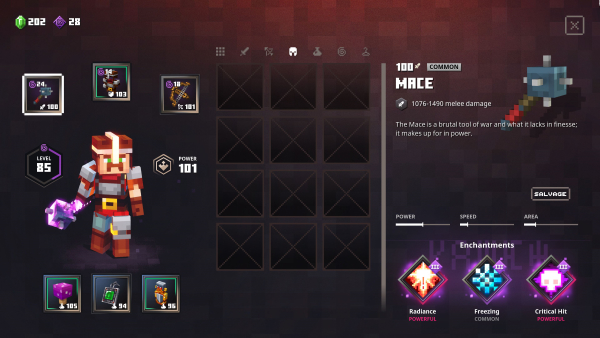 Minecraft Dungeons is a colorful, fun-looking game, though it visually doesn’t do anything jaw-dropping. It works within the confines of a Minecraft aesthetic in an isometric world. What’s there is familiar and enjoyable, keeping things recognizable for fans of Mojang’s flagship franchise. You’ll see zombies, spiders, creepers, golems, and more, along with a few new faces that could eventually make their way back into the core Minecraft game. The game’s audio design feels serviceable, but no tracks stuck with me, and apart from the Arch-Illager’s iconic laugh, nothing in the sound department has much staying power at all. 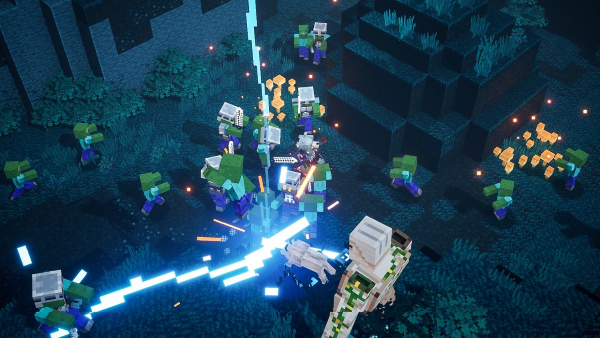 I ultimately enjoyed my time with Minecraft Dungeons. While it lacks some of the depth of its contemporaries, it’s still a fun action-RPG experience. That lack of complexity could even prove to make Dungeons an excellent entry point into the genre for young fans and newcomers. I’d love to see future entries focus on class-based combat, a bigger, seamless world, and more complex narrative. Minecraft Dungeons was a nice way to mindlessly unwind after work for a few days, though.

Despite a few bugs and complete lack of deformable terrain, Minecraft Dungeons is a novice-friendly action RPG set in a world full of familiar creatures both children and adults can enjoy.