With a title like MOTHERGUNSHIP, I must admit I didn’t walk into this game expecting much. I believed I was walking into another generic shooter where another generic space marine defeats another generic alien threat. What I got was anything but that. With unique gameplay elements and a charm that sets it apart, MOTHERGUNSHIP is very deserving of any praise it earns.

Violence: The player will use a variety of guns to eliminate mechanical enemies. A core gameplay mechanic involves crafting weapons. While the level of realism varies, it tends towards the exaggerated and ridiculous. Due to an in-game method of respawning after death, most other characters will make light of the player character’s death. 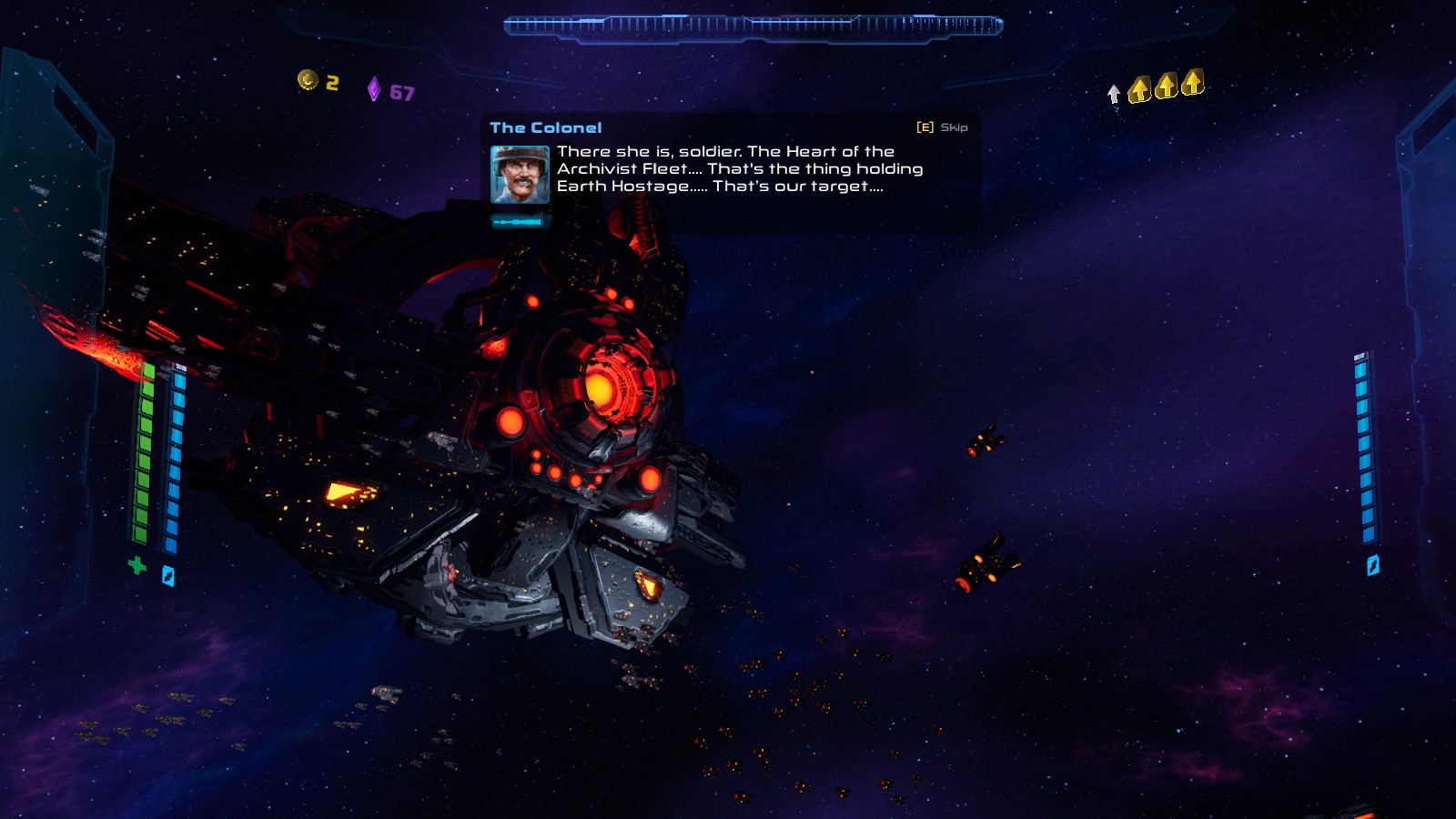 One thing that becomes readily apparent as you play MOTHERGUNSHIP is that the developers knew exactly how much effort they needed to put into any particular aspect. Level design is a good place to start illustrating this. In rogue-like style, each room is tactfully generated from a shared pool of resources. This means you’ll be seeing many of the same elements over and over again, with a few secrets sprinkled here and there. Surprisingly, this can end up being a net positive. With droves of enemies all closing in on you, the gradual familiarity of each room’s layouts helps to decide a strategy to approach the battle with. It also serves to make the times the game does introduce unique elements more memorable. 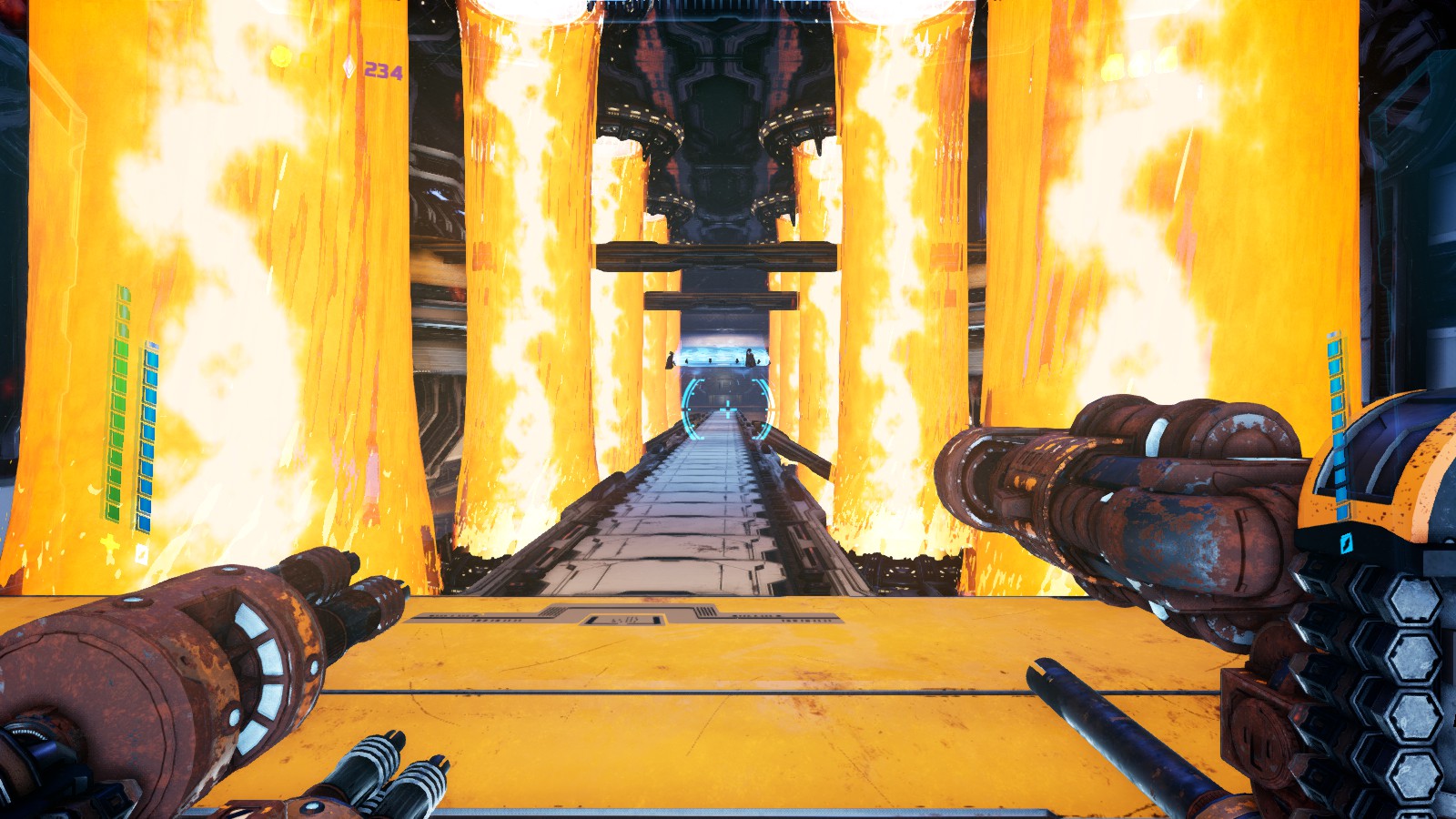 Environmental hazards abound in some rooms.

In terms of in-game strategy, mobility is key. It is easy to describe MOTHERGUNSHIP as a three-dimensional bullet-hell. Enemies will be shooting at you from nearly every direction and cover can be very hard to come by. You have to be as quick on your feet as you are with your trigger fingers if you want to survive and move on to the next room. Enemy design is one of the themes a lot of thought clearly went into. If you are playing on Steam and pay attention to the trading cards you earn, you can actually see the developer’s notes and thoughts on how they designed enemies and for what purpose. Facing floating repair bots, stationary turrets, and flying death machines, you’ll have to learn to adapt to each situation you find yourself in at any given moment. 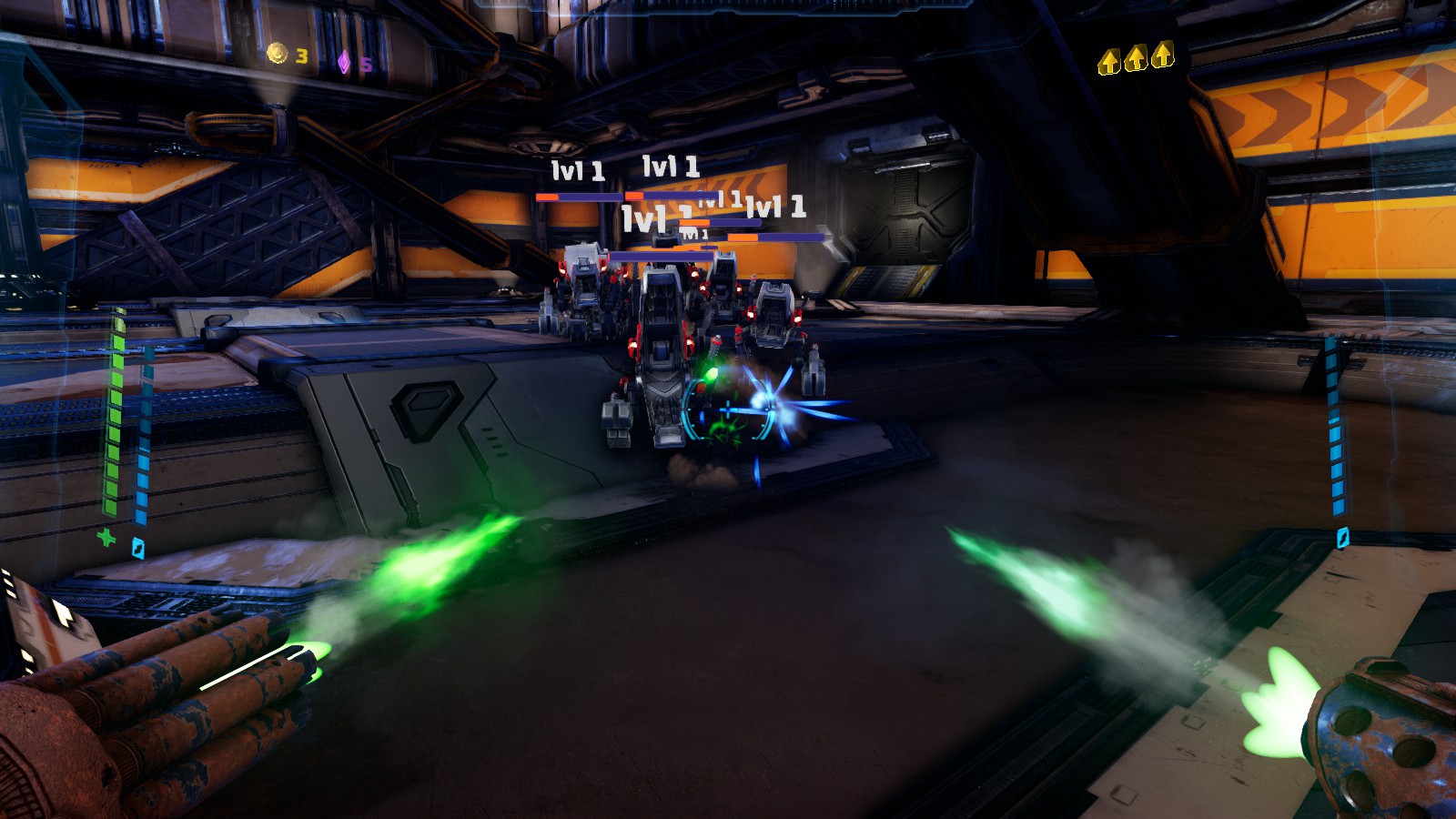 Getting chewed up by a bunch of robot attack dogs is just one way you can die.

Speaking of adaptation, it would be impossible to not talk about the game’s most advertised mechanic: gun crafting. As you progress through rooms, you’ll frequently find shops to spend the coins you collect from fallen enemies. In these shops, you will find the parts you can collect to create just about any weapon you can imagine. With very few limitations—such as making sure all your barrels face forward, for obvious reasons—you can do just about whatever you want with weapon design. If you want to carry four rocket launchers in one hand, and a shotgun/grenade launcher combo that fires bouncing shots in the other, then your only limitation is the parts you have on hand. 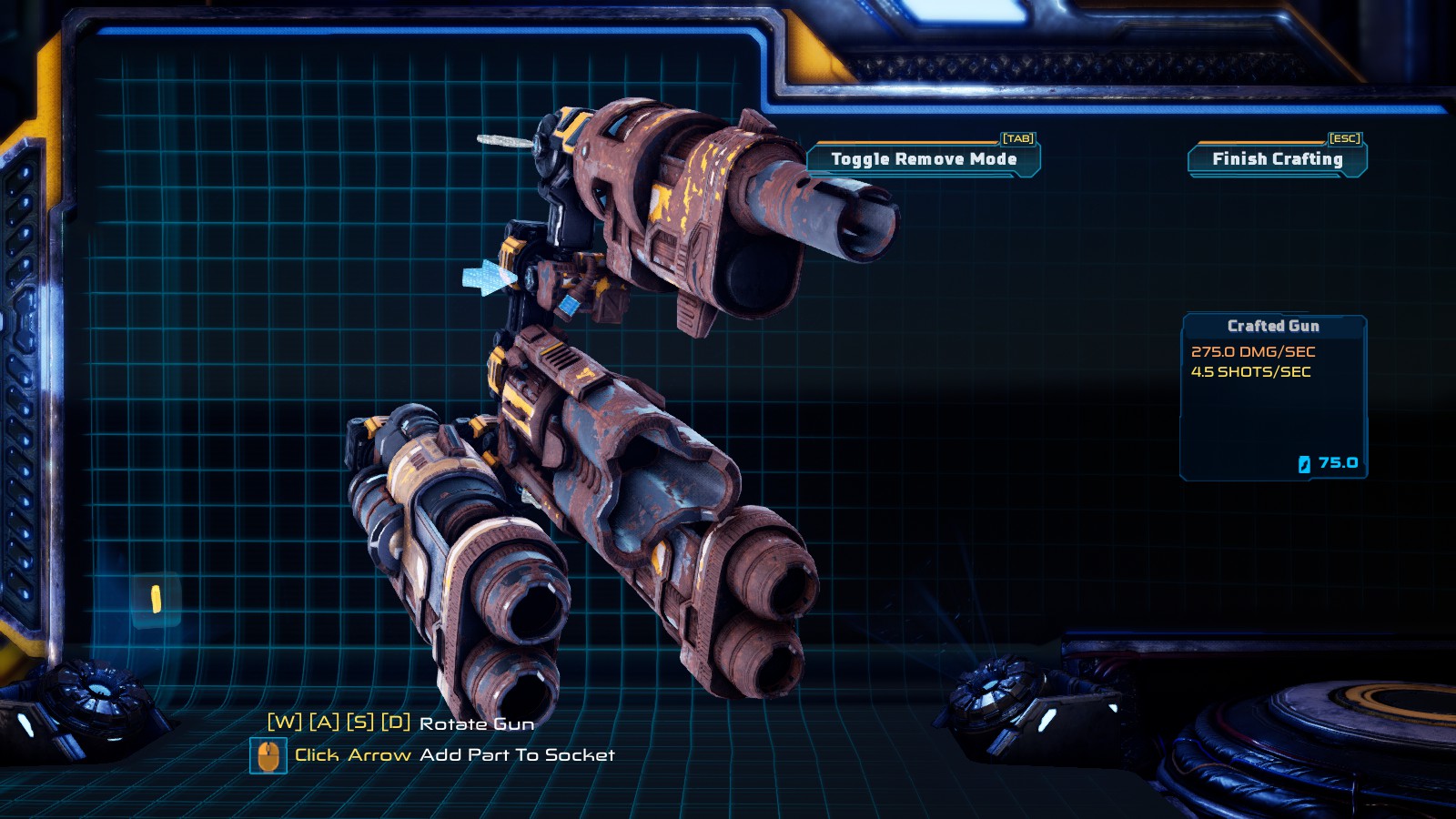 This combo is actually on the CONSERVATIVE end

Parts you collect will stay with you after each level, eventually building up to an armory of outrageous proportions. Of course, that’s only if you successfully complete a level. Death is always waiting for you around every corner. The slightest slip-up can see your run ended prematurely, costing you everything you carried into the level. It’s a system that pushes you to try various different types of guns, preventing you from just settling on a comfortable few. But much like the weapon durability system found in games like Breath of the Wild, it can be disheartening to see your favorite armaments disappear before your eyes. Not to mention what I’ve come to know from my RPG gaming as “The Elixir Problem”—when will you use that awesome powerful item, knowing you might lose it forever and need it later? 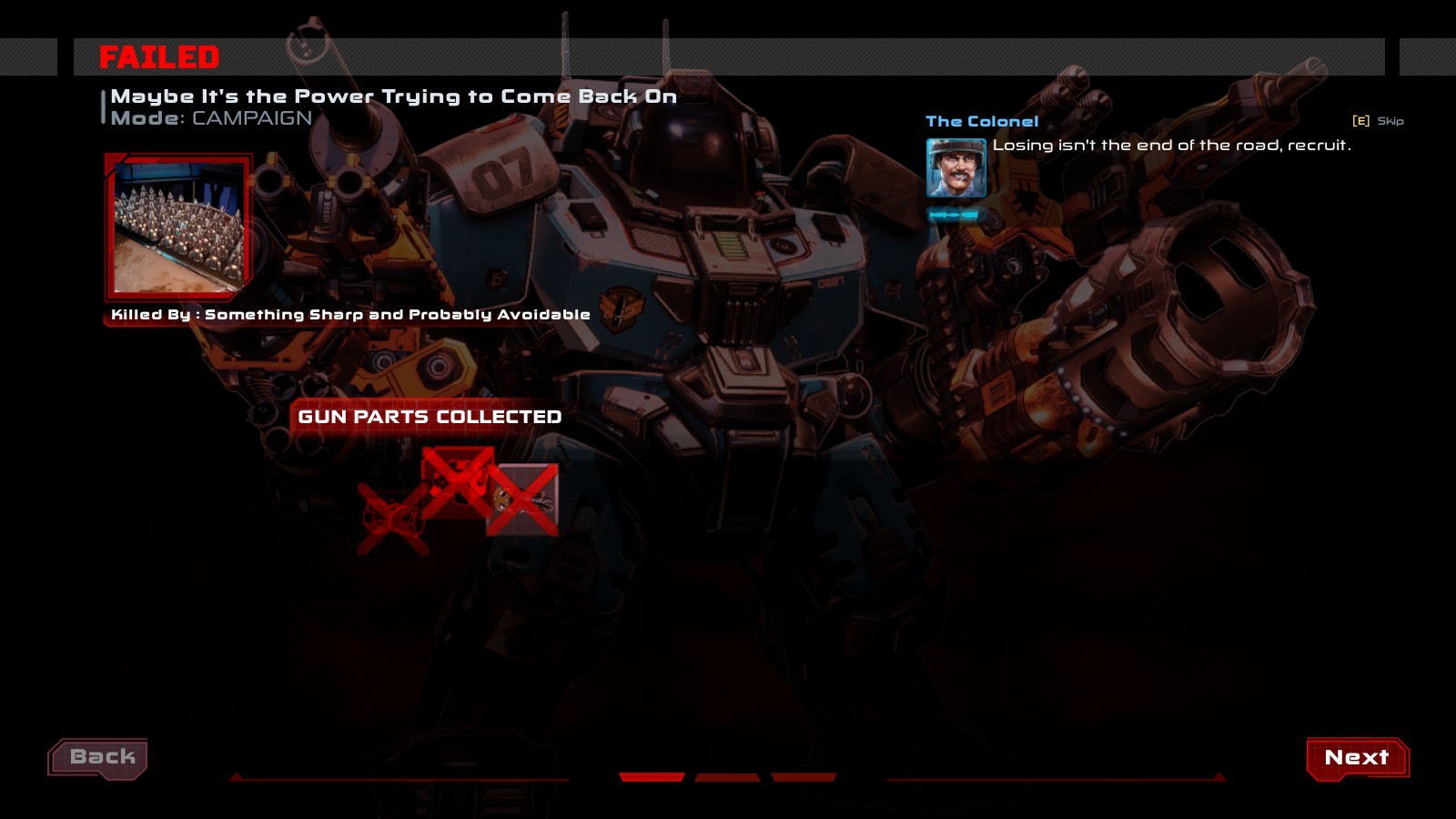 At least they don’t beat around the bush.

Despite some frustrations, all the mechanical elements come together to create a truly enjoyable shooter. However, well-designed gameplay isn’t the only thing MOTHERGUNSHIP has going for it. At first glance, the story seems like a typical plot. Alien machines called the Archivists have descended upon Earth. You play a new recruit sent to infiltrate their ships and blow them up from the inside out, eventually culminating in taking on the titular core of the enemy fleet. It’s certainly not going to win any awards for breathtaking originality, but with the charm that MOTHERGUNSHIP presents itself, that definitely seems intentional. The game revels in playing all of its tropes to the fullest, with a dead seriousness that is clearly comical. 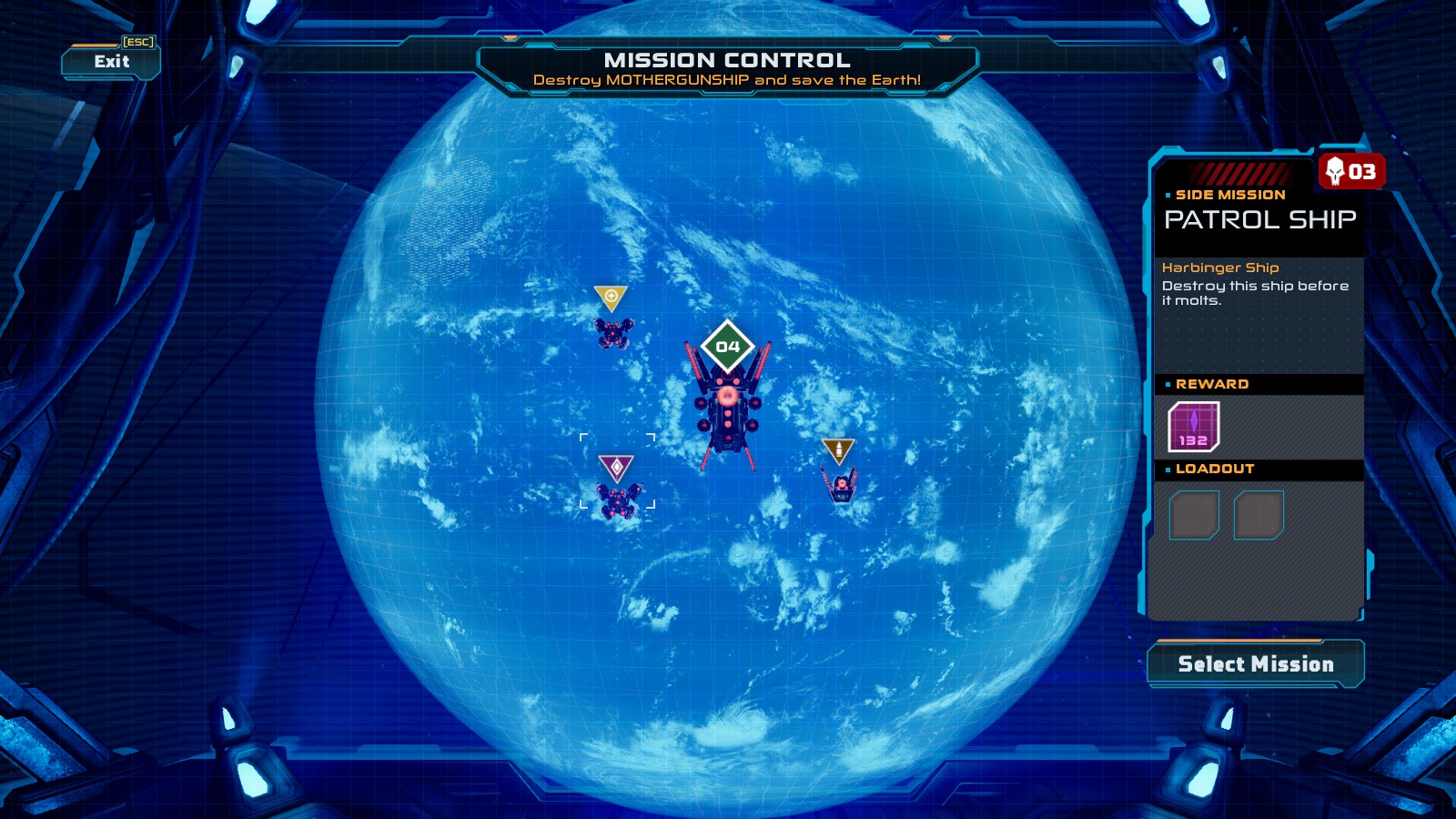 Not to mention the other characters of the game. Though unseen, save for portraits, you will be accompanied by the voices of various individuals providing commentary on your missions. I say commentary rather than something more formal like updates or directives because the basic goal of the game—to survive each room until you reach the end of the level—never really changes. It’s not like you’ll be receiving any critical gameplay information once you’ve cleared the tutorial level. They do provide some level of backstory to the game, but its clear that the primary purpose behind these characters is to entertain. From the gung-ho commander in charge of your missions to the put-upon AI that has to deal with him, every level will have a line or exchange that’s going to make you chuckle, if not laugh out loud. 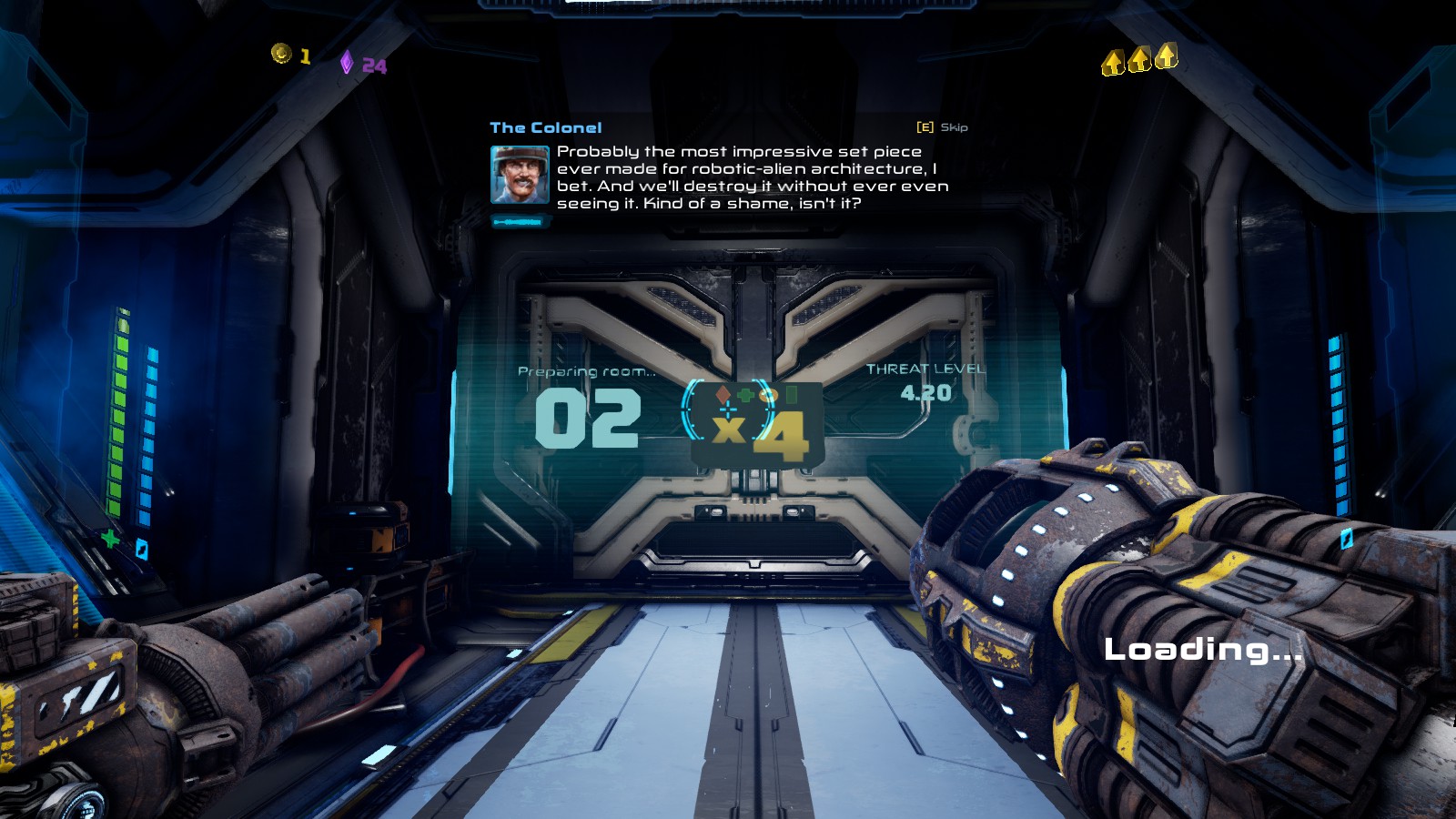 This game’s tongue is planted firmly in its cheek.

In its current state, MOTHERGUNSHIP is nothing short of an energetic and entertaining thrill ride. So the fact that the developers seem intent not to simply rest on their laurels is amazing. Already they have made it clear they will be introducing co-op play in August, and have made the dedication to add more content periodically, such as new guns and enemies, as free updates. Nothing indicates any intent to change the core design of the game; whatever the future holds, MOTHERGUNSHIP looks like it will remain a solid addition to nearly anyone’s gaming library.

MOTHERGUNSHIP's frenetic action and inventive, player-designed weaponry ensure you won't ever have a single boring moment playing it. With entertainingly charming presentation and new content already on the horizon, this game doesn't look likely to wear out its welcome any time soon.