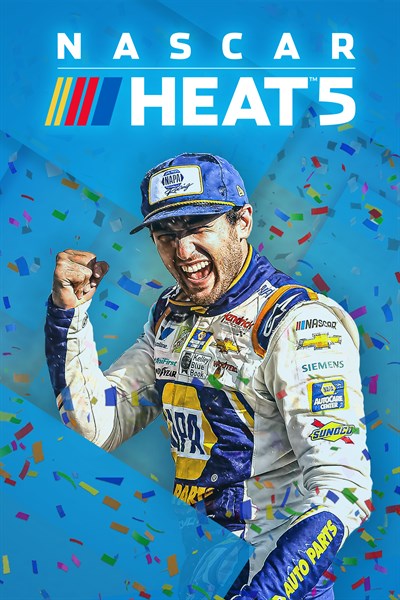 Every year that I review a NASCAR Heat game, I have a greater appreciation and understanding of the sport. Since last year, I started following this most recent season and watch races whenever I can. Before the season began, my household picked drivers to root for. I chose Ryan Blaney and purchased his #MombaOnThree shirt during the time that various drivers were honoring Koby Bryant. To this day, my family still watches weekly, through the brief iRacing stint and events that took place as our country was affected by social injustices.

I wish I could say that my time with NASCAR Heat 5 was just as unique, but that is not the case. Many sports games suffer from the annualized curse that prevents them from seeing significant changes from year to year. With this being my third year covering the series, I have now experienced this form myself. However, if you’re getting into NASCAR for the first time, this is still a great place to start.

NASCAR Heat 5 is rated E for Everyone. Players can run into cars, but there is minimal destruction that occurs. The most that can happen when cars bump one another is that they might spin out and cause a pile-up. The game includes songs from various real-life artists; in one of those songs, the word “d*mn” can be heard. From my experience, NASCAR Heat is a family-friendly series, but caution is something to consider when playing and interacting with other players via the online features. 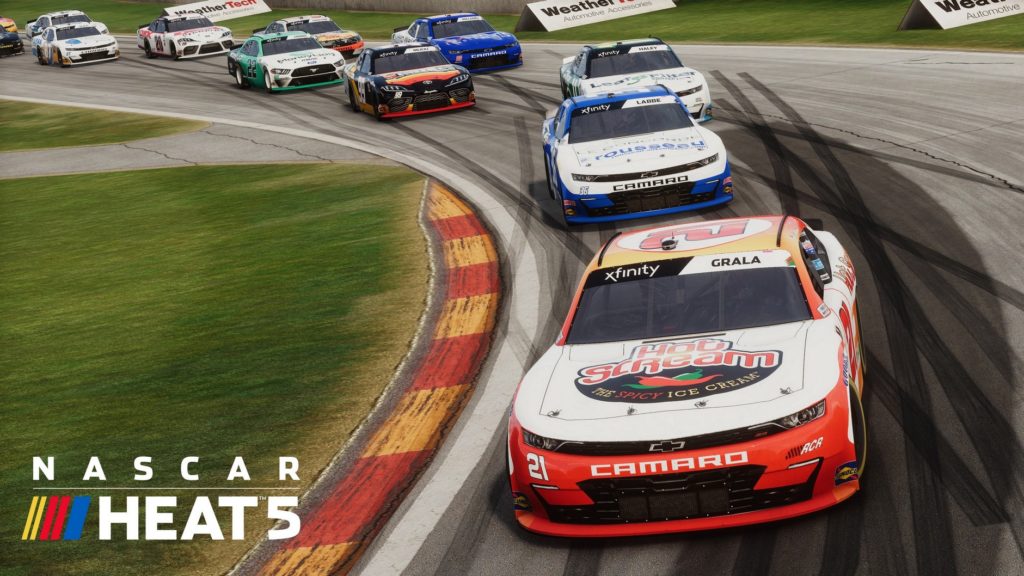 NASCAR Heat 5 brings the series back for another year with some new features such as a test session mode, more in-depth career statistics, a Pro League ranked online mode, and more set-up options. Not only do some of these changes not matter much to me, but they are minor additions. This is mostly the same video game you played last year.

The career mode is where I spent most of my time in the previous releases of the series, and is the same experience of the prior year. Starting up the game mode greets you with a newspaper headline and a conversation with your agent. You can again decide what series you want to race in and the team you want to run with. The only difference is that you’ll be able to track average lap times and more that will likely encourage you to do better if you want those numbers to be better. As a casual player, I decided not to waste much time there and jump into the Championship mode. 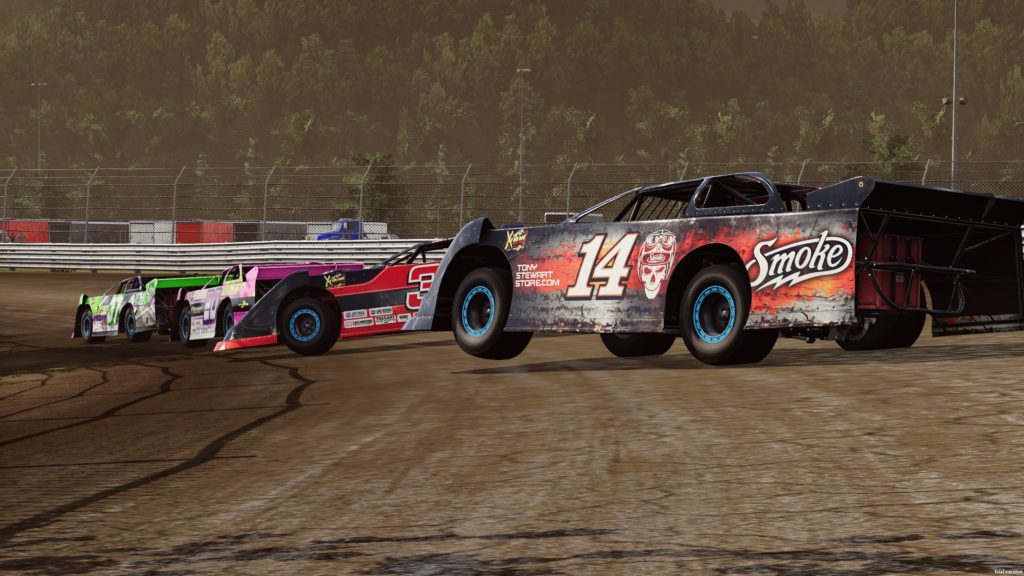 Your career begins in the dirt series.

As I have described in past reviews, Championship works much like the Season mode in the Madden series. You have the option to race out a full season or just the playoffs and a variety of other options if you so desire. I entered an entire 36-race reason and enjoyed my time experiencing each track and having to master how each of them works. It took a few races before I got myself back in the groove, and I was soon qualifying well and racing among the greats in the top ten. This is the best mode if you feel like playing a race or two and want to eventually win that Sprint Cup without getting too deep into the simulation aspect of the game.

The new feature I did get some mileage out of is the Test Session mode. This practice mode is built for anyone that wants to tune their racing wheel set-up, but I used it to learn a few tracks and how to handle turns appropriately. This option relieved the pressure that came with trying to meet my lap-time goal during those pre-race practices. The time I spent in this part of the game was much needed and helped me get back into the flow of things as it had almost been a year since I last played. 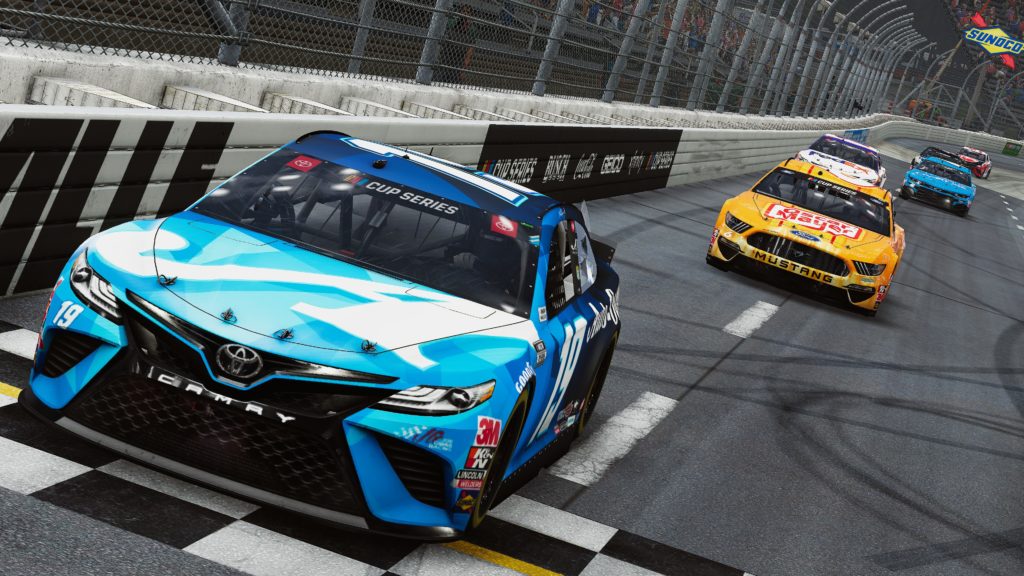 A big problem I have with the game is that something odd is seemingly going on with the difficulty. When I qualify high, it’s pretty easy to battle with the top ten races to gain first place eventually. On the flip side, it becomes tough when I quality much lower on the pole. Despite how hard I try, there is no way I’m climbing to the top ten as everyone begins to put me in their rearview mirror. It could be that there is some facet I do not understand as a casual player, but it also feels as though the game could be punishing me instead of allowing me to fight my way to the front of the pack.

Outside of that frustration, there were still parts of the experience that continue to impress me from previous years. The AI continues to battle with me as I make my way through the track. Some races brought the perfect balance of challenge and opportune moments to win. One race had me battling for first place with another driver, but the A.I would not quit and somehow pulled out a win to the equivalent of that scene in the first Cars movie where Lighting McQueen sticks his tongue out for the win—a very close race. Exhilarating scenarios like that are what kept me playing, whether I won or lost. 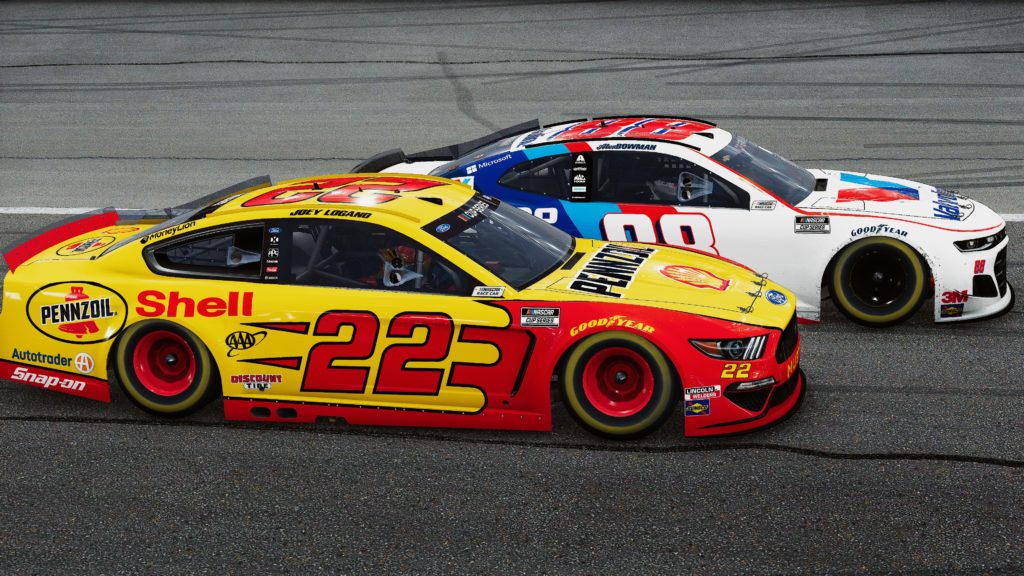 Another part of the experience that still holds up this year is the graphical presentation. This time I chose to play on my Xbox One X and see if the game was making use of the hardware, and it seems to be doing so. The lighting was the most significant improvement compared to what I had seen on my PC last year. It was still fascinating to watch the track turn into a blur on those straightaways, but much more pleasing to the eye this time around. For those that would instead choose improved performance over better graphical quality, that option is here for you as well.

The fact that there isn’t much that is new to the experience is mostly disappointing but should be expected with annual sports releases. If you’ve been playing for these last few years as I have, this is an underwhelming release. However, if you’re a fan of the sport and jumping in for the first time, then it is a great time to jump in. While not much has changed, all of the parts that make NASCAR Heat 5 an enjoyable experience are still intact. The developers are unfortunately required to push these games out just as fast as a pit crew makes repairs, but hopefully, they will get some extra time to tighten up the bolts and bring us a new set of tires next year.

NASCAR Heat 5 is the next iteration of the annual release, but fans will be disappointed to find out that not much has changed from last year even if the experience still holds up.