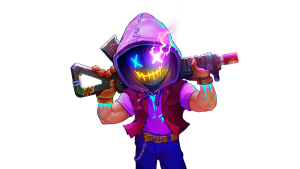 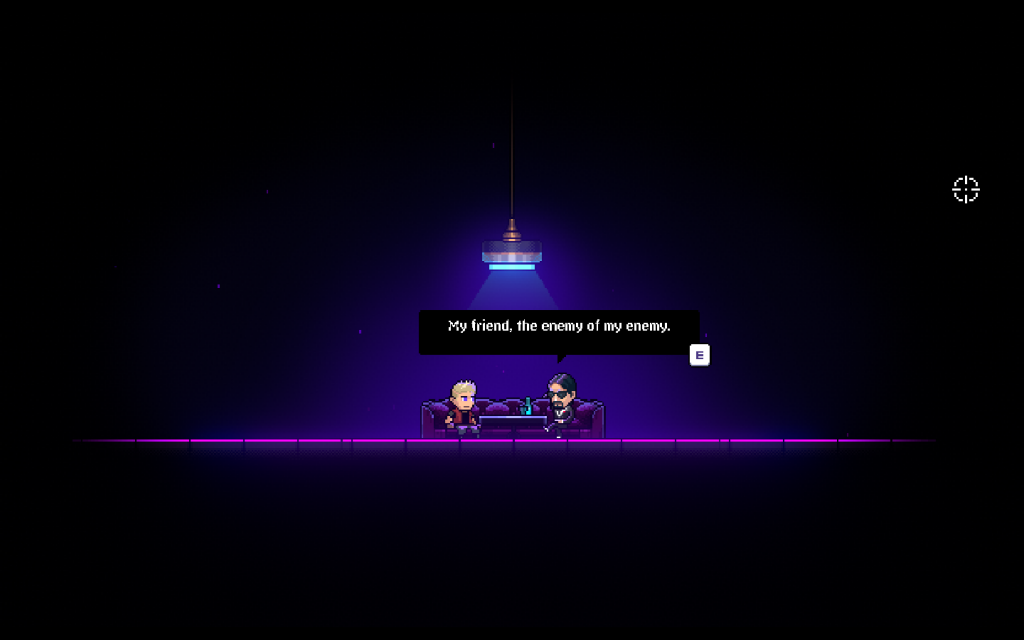 Neon Abyss is a roguelike action, platform, shooter developed by Veewo, makers of the Super Phantom Cat games. The Abyss is a fusion vibe of Greek architecture and a neon-smothered night club. It’s the place of the New Gods and it’s up to the player and the Grim Squad to defeat them. With hundreds of items and unlimited combinations, it’s overwhelmingly possible to make Old Gods out of them. 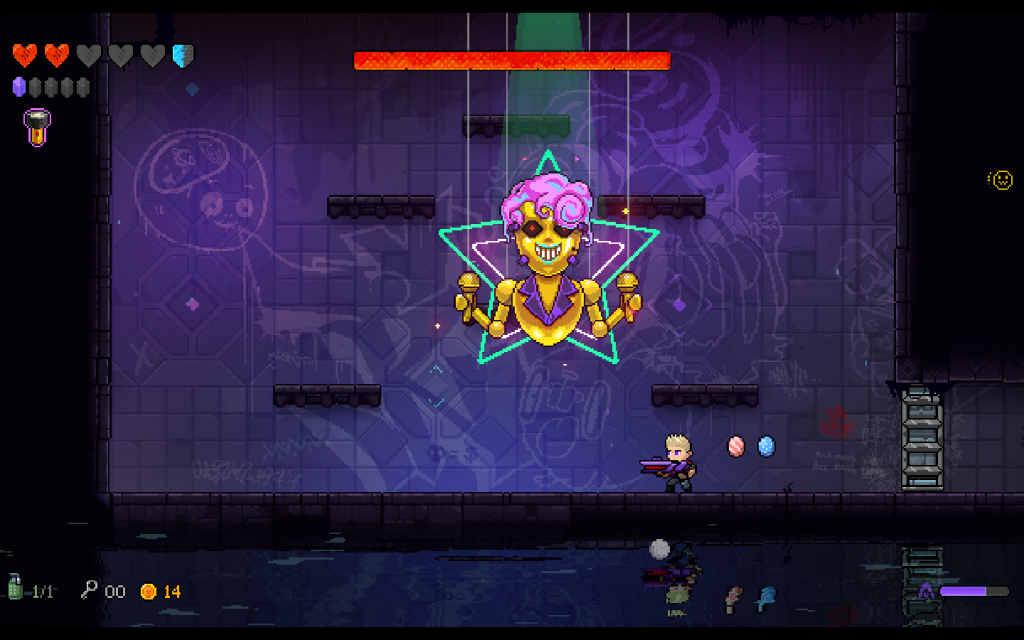 Players will use guns, more guns, a knife, and even more guns to fight their way through monsters, gods, and managers. There are depictions of blood splatters on the wall and innards splashing with every minion defeated.

Hades gives you a drink that starts the adventure, and you start each new dungeon run at the bar of a purgatory-like night club, as if waking up from a dream.

Players will work for Hades, who is well known to be the god of the underworld, in an anti-hero backdrop of an adventure. Available characters to play as include a rogue, a hitman, a weldangerous swordsman, and an experiential man with mind powers. 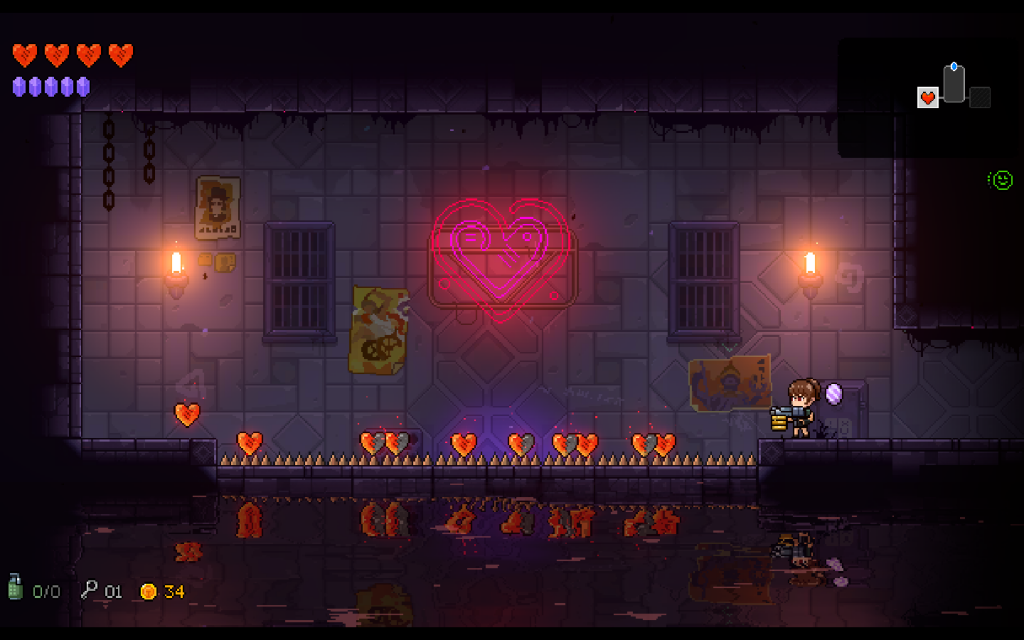 The game begins with an opening cutscene of a well-dressed man named Hades speaking at a table with the player. He wants to get revenge on the Titan group (those New Gods) for taking all of his powers and killing the player’s family. The player then takes a swig of some glowing drink and is transported into the Neon Abyss.

And the Neon Abyss does live up to its name. The Greek statues at the very beginning are wearing neon bracelets of various sizes from head to toe. The music consists of buoyant 80s techno beats. The dungeons are an aesthetic mixture of downtown big city night-life with…dungeons? It’s interesting, the rooms are set up like a dungeon crawler, but instead of torches, you get glow sticks.

I quickly get the sense of Binding of Isaac, and Enter the Gungeon gameplay after the tutorial lets me loose. Instead of having a top-down view, however, Neon Abyss is a left-to right randomly-generated dungeon room run. The first dungeon is all about learning how to pick up items, use guns as your basic attack, throw grenades, and pick up egg pets all before fighting the boss. 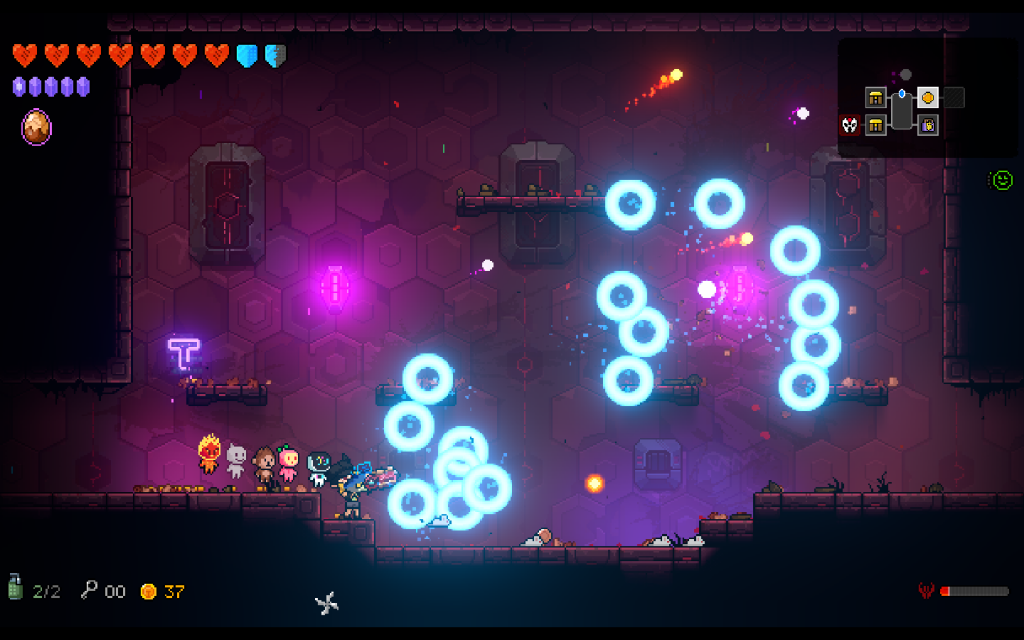 The room layouts differ slightly, but they all have platforms to traverse. On them, players can find boxes that may contain an item, blast-able blocks that usually conceal a key or a treasure chest. Sometimes there are spikes or high ledges in which case traversal is used by bouncing off blue pads. Enemy encounters range from worms sticking to the border of the room, eyeball bats, teddy bears with crazy range attacks, or floating heads. The normal enemy variations are not abundant, recycled every new floor. Fortunately that means memorizing attacks patterns are kept to a minimum. Bosses are also cycled around, and you unlock more to fight the more you play. The “manager” of the first world became a normal boss encounter during my next playthrough.

Send These Foul Creatures into the Abyss

The enemies and the boss battles all revolve around bullet-hell combat; you dodge patterns of projectiles until you land your own. After the carnage, players gather up coins or diamonds used for opening doors or purchasing items in the randomly placed shop room. Boss kills earn a special point used for buying permanent upgrades and special things.

The first allows a secret goodie room to appear every level. Extra rooms, an additional playable character, and bonuses to keep playing longer made up the entire upgrade board.

After death, the player is taken to a nightclub. There they can dance for fun, look at the upgrade board, or change characters. There are other functions in this hub but are locked, and it seems playing further will open up their usefulness. 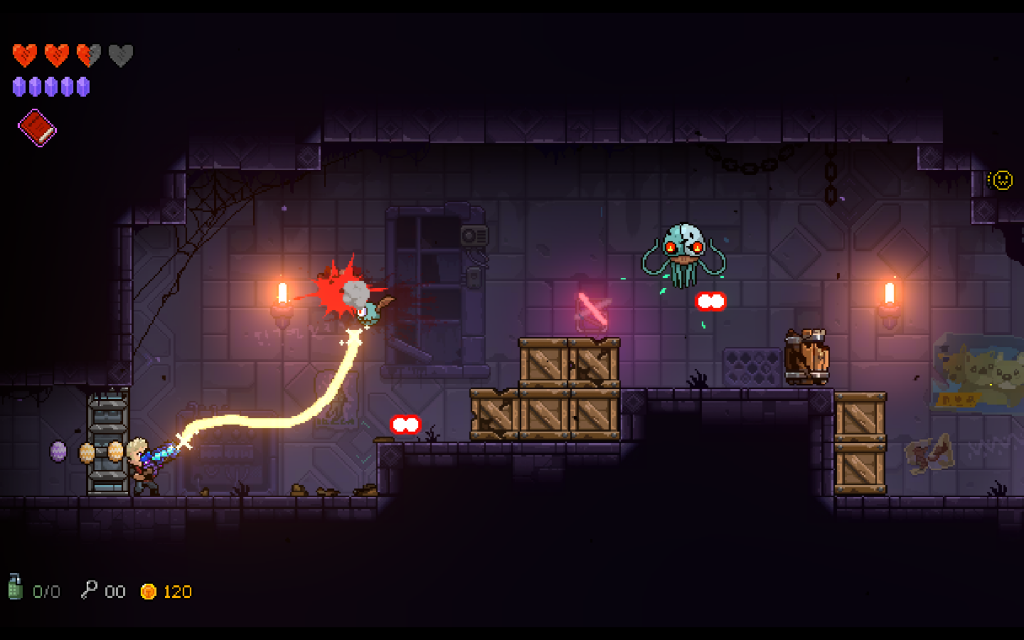 The guns are incredibly varied, from a death ray to a bubble blower. Each gun fires differently than the last. Some of my personal favorites are the Triggerfish which blows lots of huge bubbles in a spinning pattern, and Thunder, a guitar that fires musical notes around the player, which is useful for up-close encounters. Players can only carry one gun, but there is a melee weapon which is given it’s own button, but can activate if a box or enemy is within close proximity.

Pets are also an important part of the adventure. Along the way, players find eggs in goodie rooms, boxes, or chests. It takes time for them to hatch, players can’t sit there and wait, they must find a scuffle. After a fight is over the eggs hatch, either giving nothing or a little familiar. The familiars are also as varied as the guns; most are useful, while others are meh. However, these pets evolve into stronger versions if they stick around long enough, becoming even more of an aid with enhanced abilities or bullets. And their funny little names and designs are a joy to have around.

One really cool feature that I noticed in Neon Abyss was a bar in my lower-right screen corner that changed color every so often. I found out thanks to the loading screen hints that it had something to do with playing peacefully or aggressively. I thought I was getting into some heavy Undertale gameplay here, but fortunately, that wasn’t the case. There are crystals spread about that react kindly to being given a crystal, or get mad and spiky if attacked. Depending on the choices, wise or aggressive, fill the bar. Filling it up completely gifts the player with a separate room accessible via teleport rune that gives more items to play with. The aggressive items are monkey’s paw in likeness, but since this is a bullet-hell game, it’s easier to fill that meter. 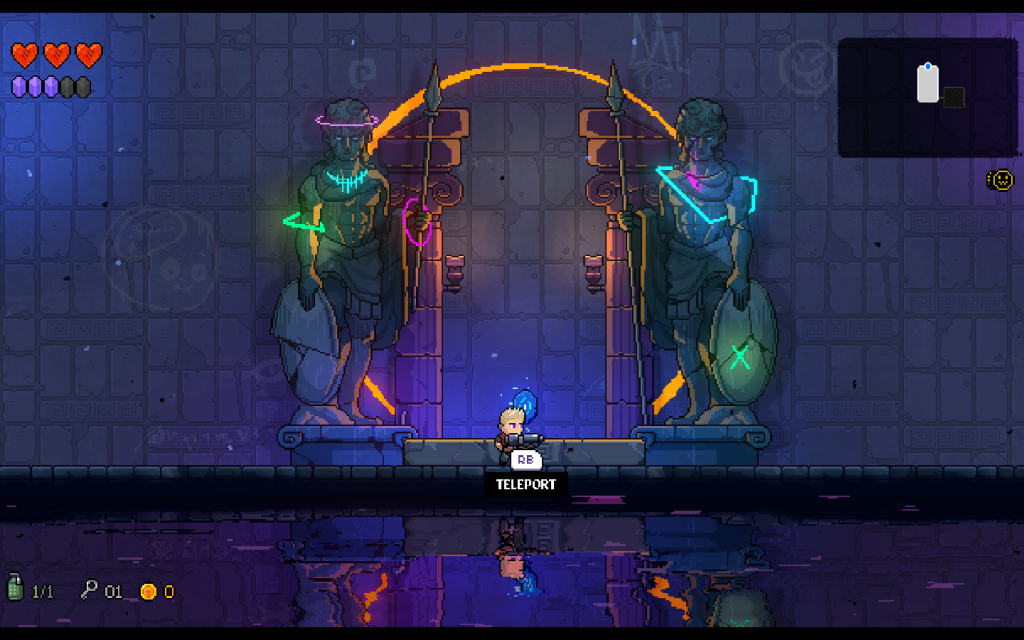 The wise room gives good items that do not require a sacrifice, and are generally the better items to get, but taking careful aim and risking more damage to consider a battle plan means this room is trickier to receive. In the end, it leaves players the freedom to make their choice on how to play.

Speaking of gameplay, the controls are impressively tight. The controls are easy to master with a controller or keyboard/mouse, and not to mention responsive. Hitting enemies comes down to the player’s skill, as games should be. It’s a hard game. Projectiles and enemies are everywhere. Sometimes enemies don’t cause damage if the player comes in contact, and then sometimes they do. The “manager” fights are extremely more difficult than a regular boss. And sometimes players will just get a bad run; no good items, no keys, no grenades, and no good weapon/pet combinations.

Neon Abyss has difficulty settings players can change at any time. And if the seed number was pretty good, players can enter it and run through again. 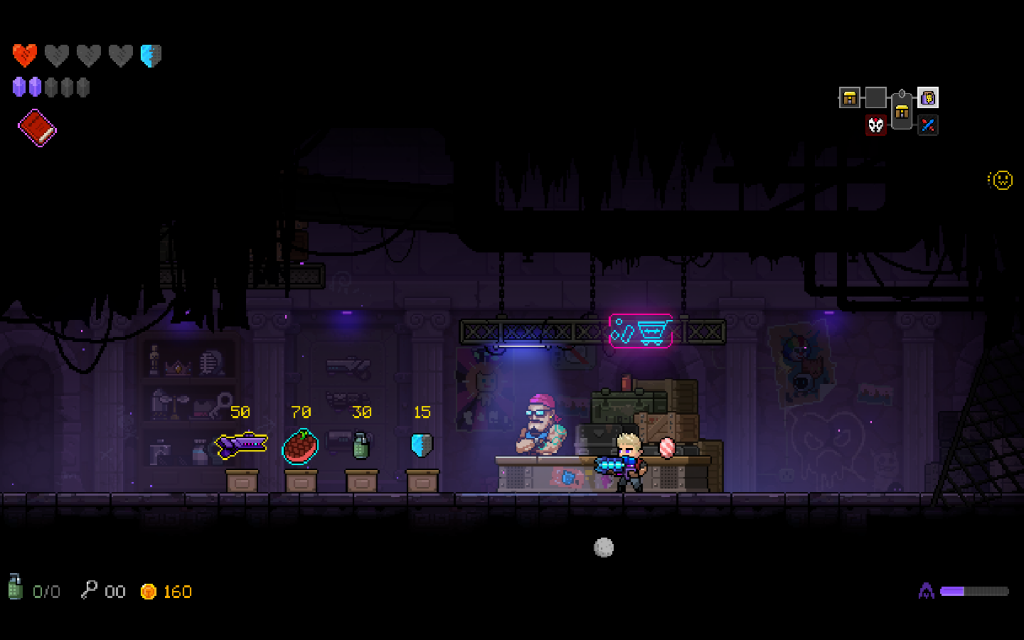 I mention Binding of Isaac earlier. It’s similar in style rather than subject matter,  yes, but there is enough to be unique. I am personally favoring Neon Abyss for it’s glow sticks and funky bosses over Isaac and his basement. I was flustered at first, but with time, I felt amazing running through the dungeons, and even more amazing when I had a bunch of things blowing everything up on-screen. I’m genuinely interested in unlocking more and more of the game and pushing through the challenge to see all the endings it has to offer.

If there is one discrepancy to note, is is that the promotional art, and the in-game art are not the same, and that made me sad. Imagining the graphics matching the high-quality visuals fills me with joy, so my hopes are high that Veewo shoots for that next level! 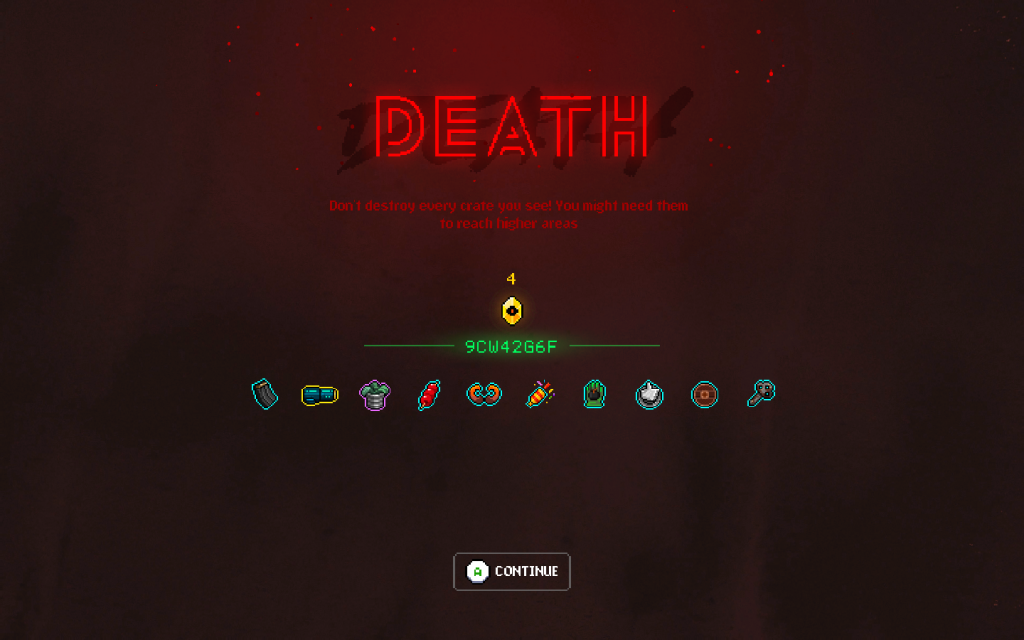 Neon Abyss is a really good game, and it's worth getting.