Review: Never Give Up

As good as Challenging platformers can get 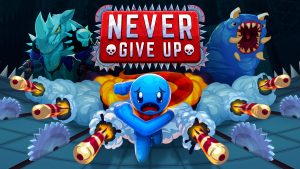 If you’re a rage-quitter, this game is not for you. From Massive Monster, a developer with an astounding resume of over 50 games developed, comes a game that makes Mario and Commander Video look like wimps. Never Give Up has a steep learning curve, yet might be one of the best platformers of 2019. 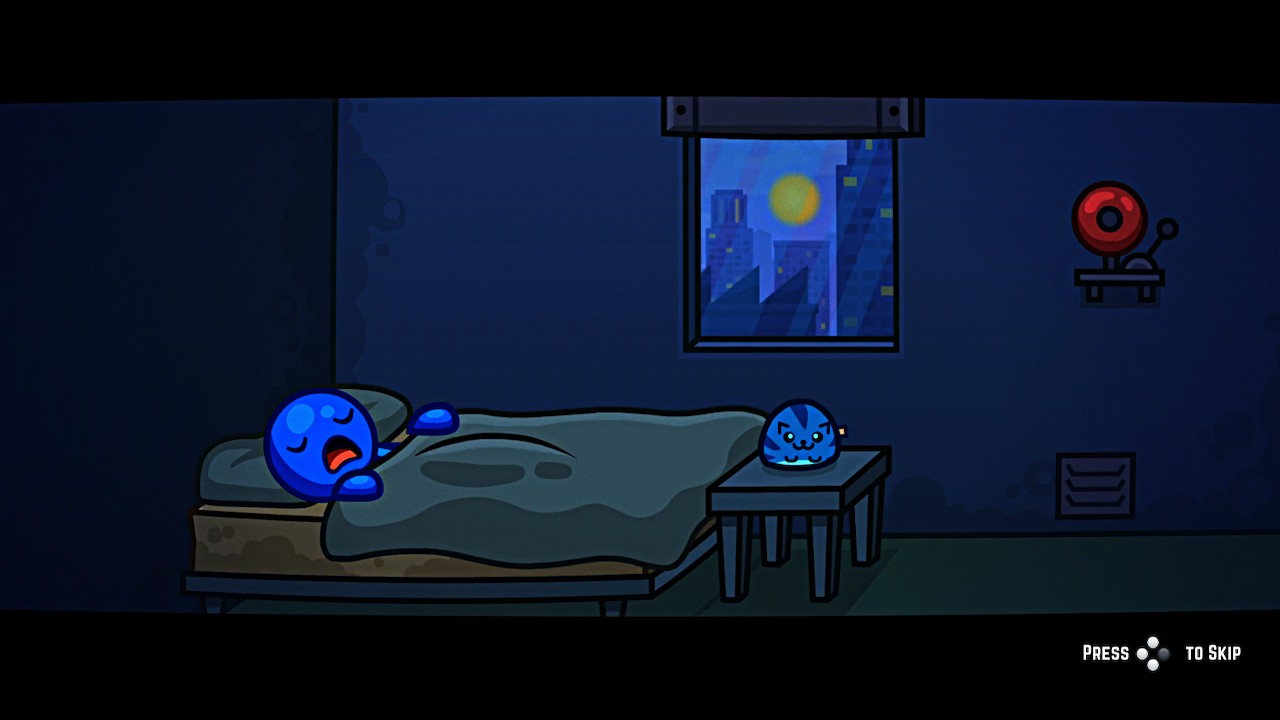 The protagonist….who (or what) is he?

Violence: Never Give Up‘s protagonist traverses through death traps, including saws, lasers, rocket launchers, poisonous gas, murderous metal rhinos, spikes, proximity mines, falling bombs, disappearing floors, motion-sensing guns, deadly robotic fish, and much more. Every time the protagonist dies, his body erupts in an animated bloody mess. The mess stays until the room is completed and the protagonist reaches the end. Needless to say, the room can become more and more crimson with each death. 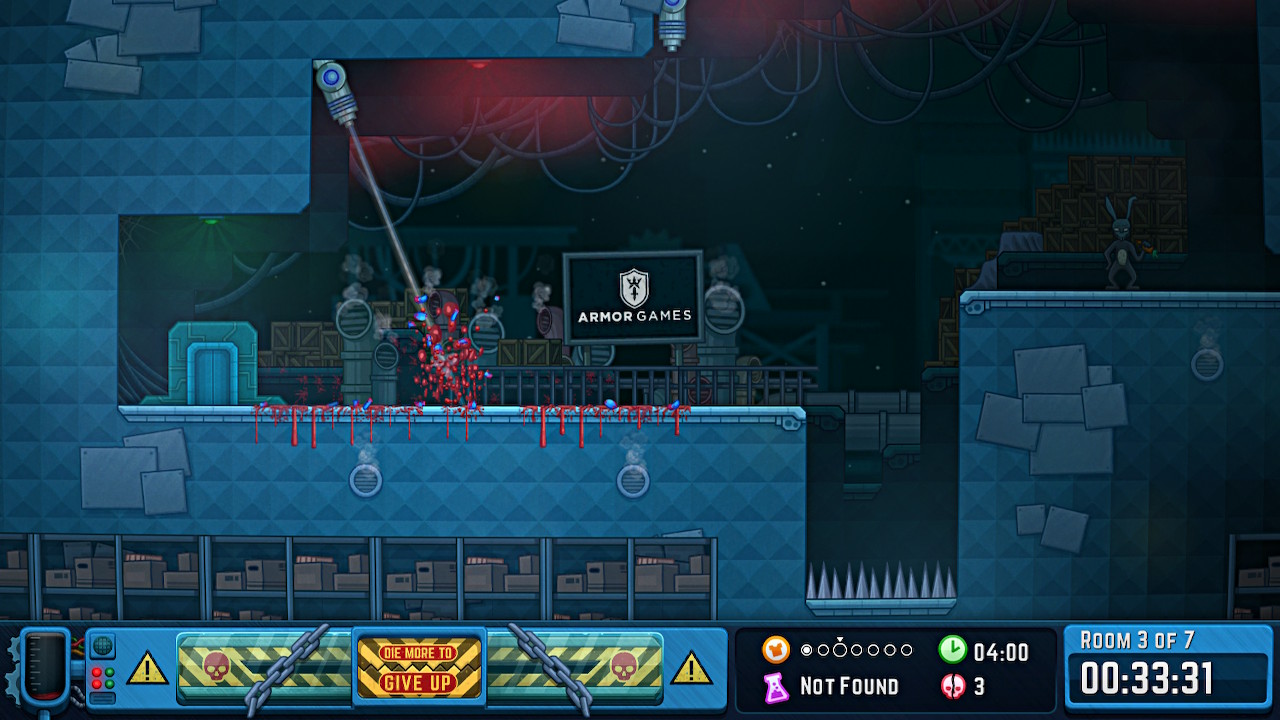 Language: The protagonist uses profane language, but the game bleeps it out, sounding humorous instead.

How do I describe a game like Never Give Up? Should I save you the pain of repetitive loss? Or shall I leave you to its unforgiving, unfair, cruel embrace? This platformer is not your typical level-hopper. It won’t give you a star. There won’t be a castle to claim at the end. You won’t jump and pose in midair, as you exclaim “Oh yeah, Mario time!” All you’ll get is relief that it’s over. And bragging rights. 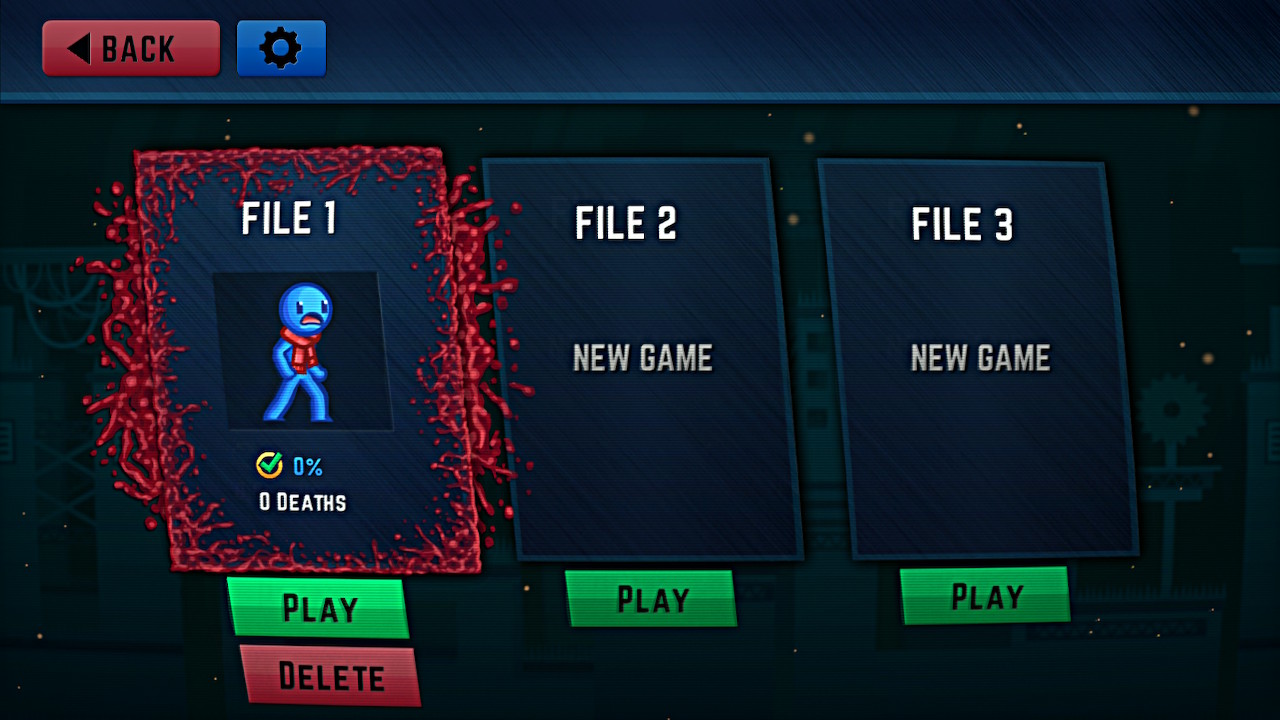 The gameplay pits the unnamed protagonist against malicious obstacles made to punish an ill-timed jump or slide. Run, hop, wall-jump, and evade traps as you attempt to make your way through the room. It reminds me a bit of Bit Trip, since Commander Video must do similar moves to evade walls and enemies alike. But Never Give Up moves faster and has no mercy.

If you die enough times, the player can “give up.” There is always an “out” at the bottom of the screen. Once the death requirement is reached (usually seven deaths), the “Give Up” button unlocks and the level can be skipped. But, come on…no one does that. If you do opt to give up, the game taunts you with a silly screen and a message, ridiculing your skill. 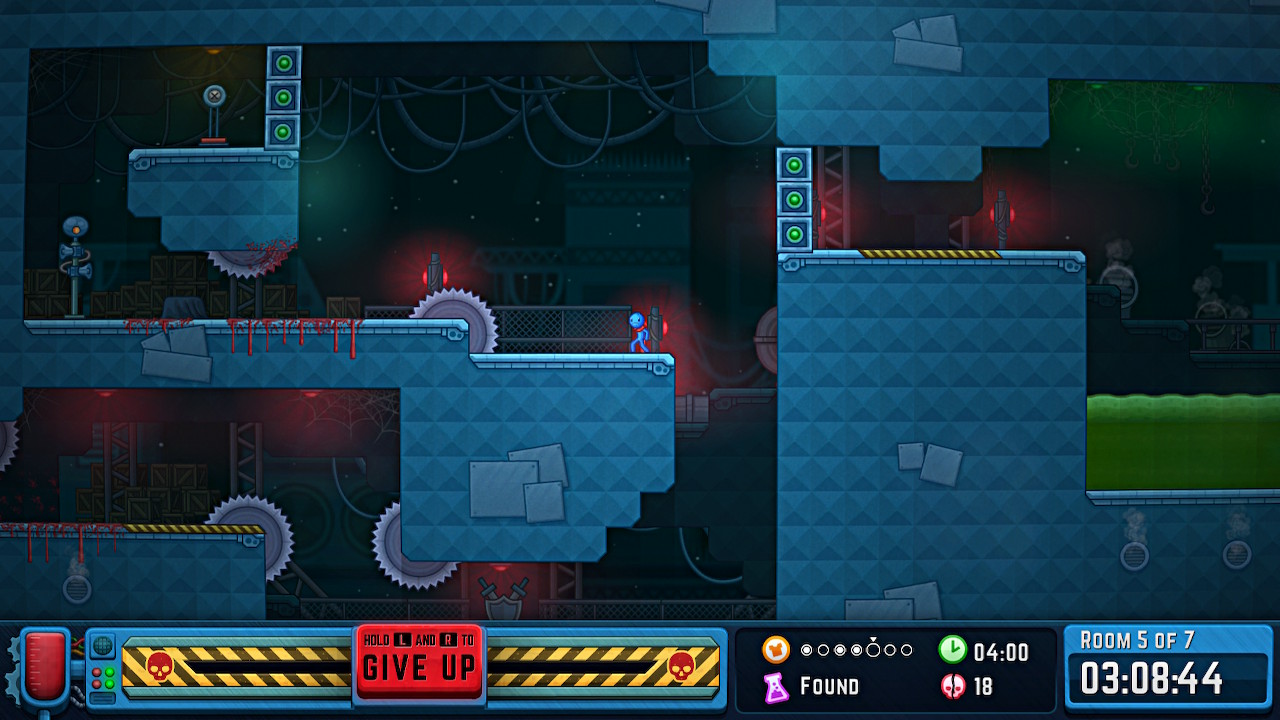 The give up button can be seen here at the bottom

There are six “worlds” included in one main overworld map. Each world has a theme, starting with the Warehouse. Each level contains tokens that can be collected in every room iteration. Collecting tokens unlocks special costumes, like a T-Rex jumpsuit. Every level also has a time limit, which means beating that entire level (including every room change) within a set time. Good luck with that! I could barely collect a few tokens. After a while, I began ignoring those and focused solely on surviving these seemingly impossible challenges. 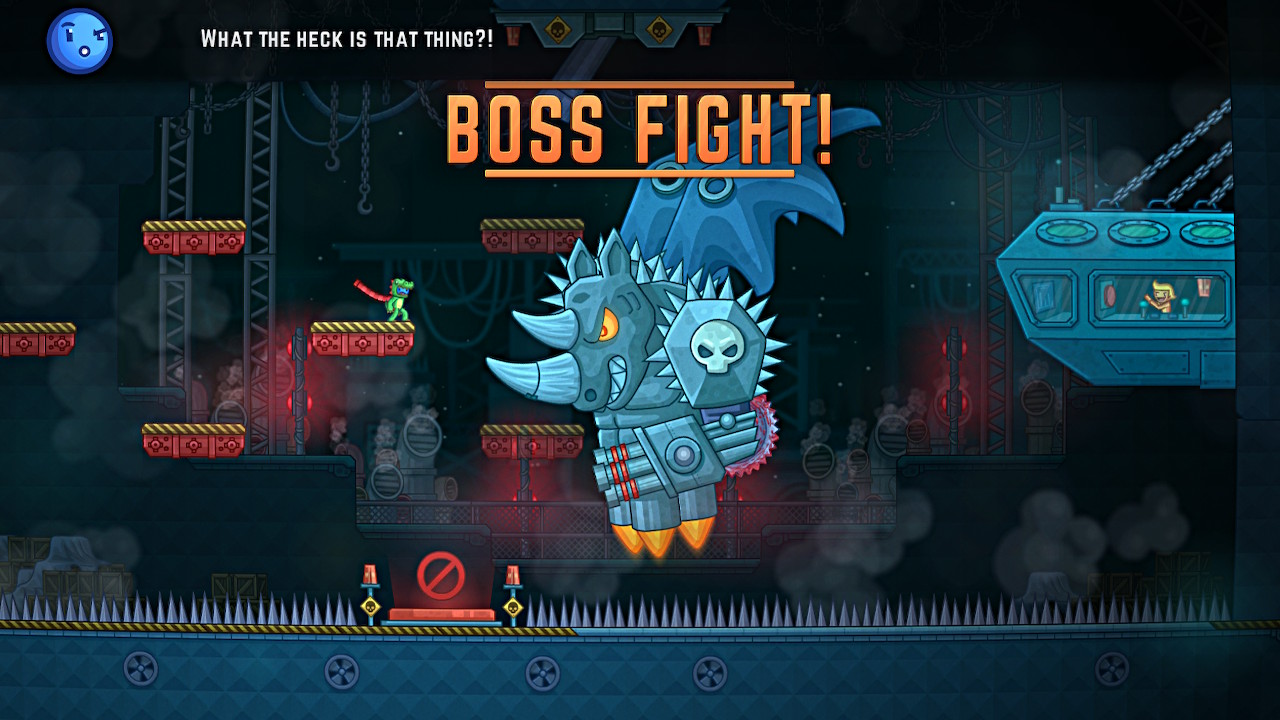 This was difficult. And no give up button here!

While the game was difficult enough, what made it worse was how easy it was for me to move the camera. Since it is tied to the right joystick, which is right below the jump button (the most used button in the game), I would frequently nudge the joystick, shifting the camera, messing up my timing. I had to switch from using joycons to my pro controller. There should be a way to either switch the camera control off or at least turn the sensitivity down.

Never Give Up sets its difficult platforming to a story. It is unclear at first, the purpose of these ever-changing rooms. But as the protagonist continues on, more is revealed. The entire setting, including the main character, has a goofy, unfortunate feel to it, much like that of the Portal games. It can be funny, but sometimes feels forced. 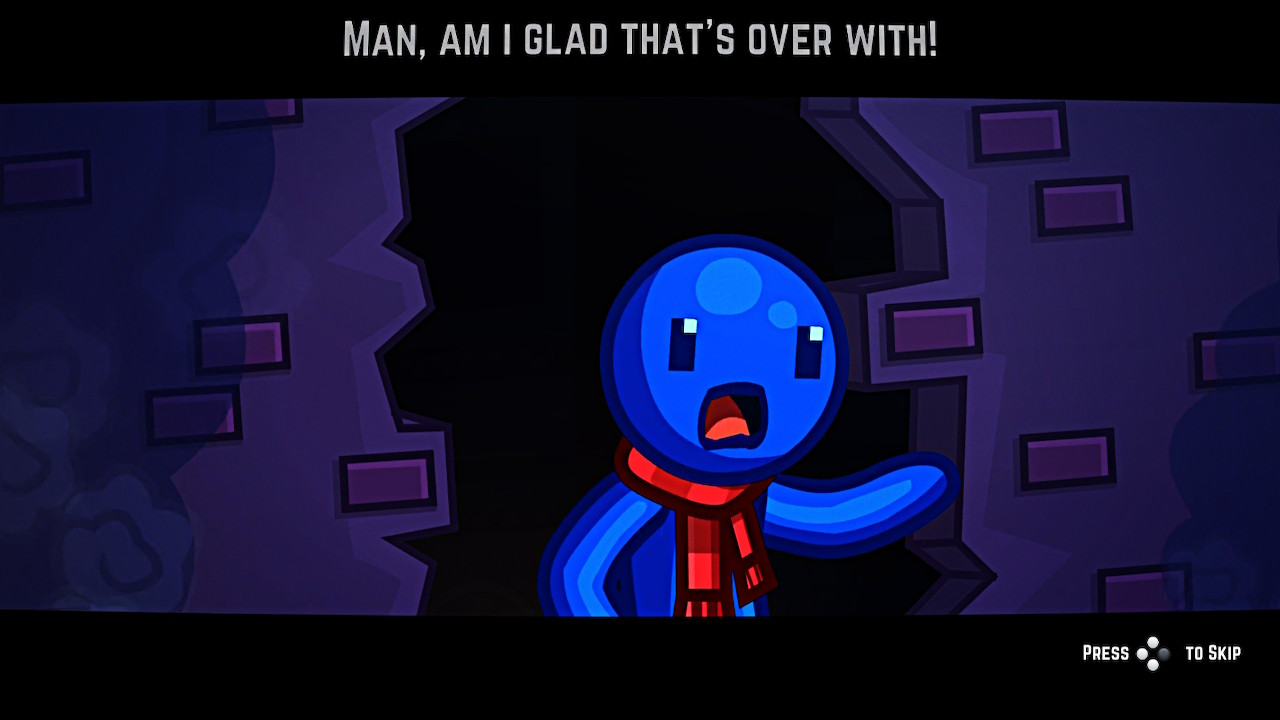 There are some cutscenes that play at the beginning and ending of new worlds.

The graphics are clear on the Switch in both docked and handheld modes. The unique part about Never Give Up is that its environments and platforms change every time the player reaches the exit. The number of times the room resets varies by level. For example, if I reach the exit the first time at the end of Level 1, I might have to play through that same level five or six more times, each time with more booby traps and deadly devices to dodge. Meanwhile, in the backgrounds of each level, pop culture and video game references can be found. So far, I’ve seen the companion cube from Portal and the bicycle from E.T. the Extraterrestrial. Massive Monster commented on this, writing that they wanted to put little things throughout the game that they enjoy.

But one of the best parts of Never Give Up is its fantastic soundtrack. One of the only things that kept me going through these intense levels is the soundtrack. I also like how music styles change with each world. The City world has a blues, jazzy feel, while the Warehouse has a more techno, mechanical sound. I’m glad that they saw fit to include good music to listen to as you traverse these extreme maps again and again and again. 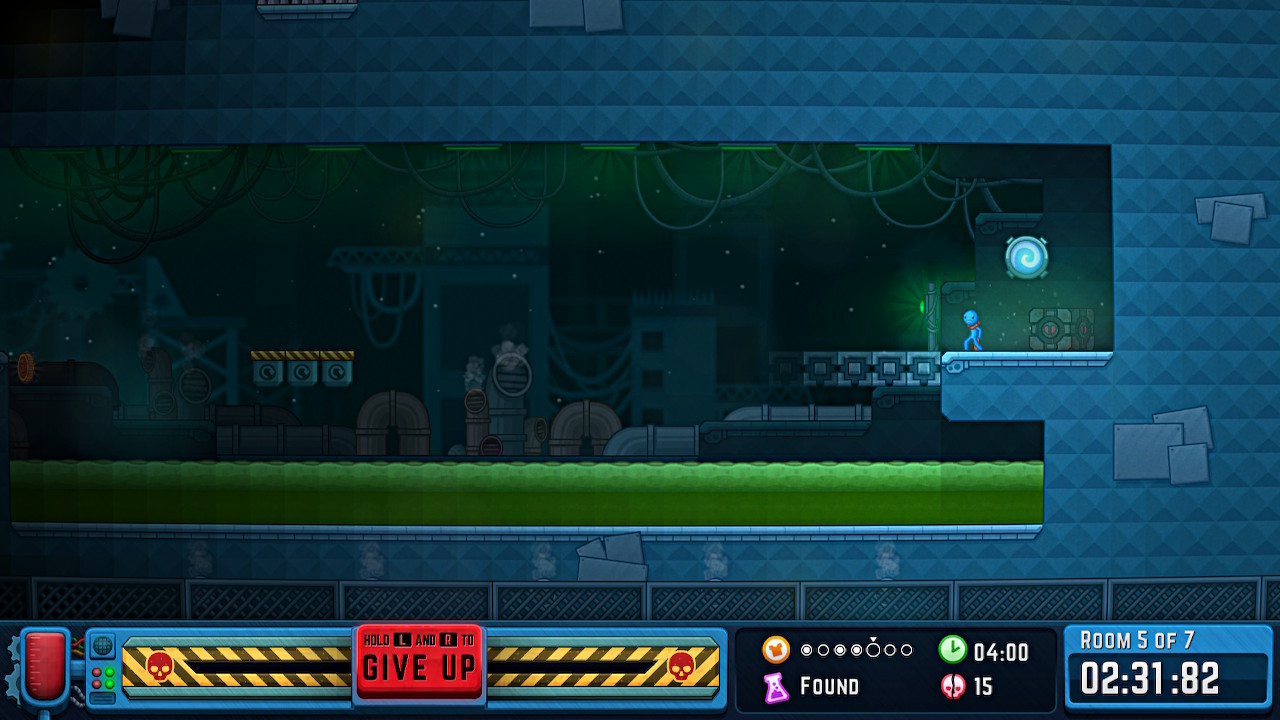 Despite the annoying controls, Never Give Up is loads of fun and a great challenge for those who enjoy it. As a player that was fond of the Bit Trip games, I was having fun with it and will return to try my skill at these crazy, difficult levels. I highly recommend this game to anyone who appreciates both challenging games and platformers.

The challenge of Never Give Up is enough to drive any player crazy, but a sense of pride and accomplishment await you at the end!