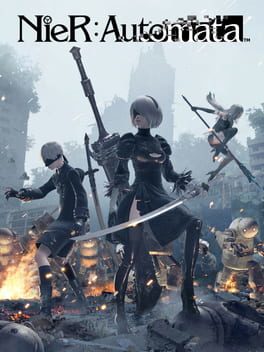 “Bohemian Rhapsody” is a popular song by the British rock band, Queen. The song consists of several seemingly disparate musical sections. However, the apparently incongruent parts come together to create a whole that is greater than their sum. PlatinumGame’s NieR: Automata is the video game equivalent of “Bohemian Rhapsody.” The game is part bullet hell shooter, part action-RPG, part open-world adventure, part platformer, and yet these elements are masterfully weaved together into a breathtaking gaming experience.

Spiritual Content: NieR: Automata raises many philosophical questions that have implications for theology and practical life. The game’s protagonists ponder on the nature of free will and its relationship to moral accountability and personhood. According to the game’s reasoning, a being is not a person if they lack free will. A detailed account of what free will really is and how one can have it is not fully explored..

Another interesting concept explored in the game is the relationship between personal identity and memory. The game takes a dualist view of persons; both humans and androids are more than just their physical bodies. Each time the player saves their progress, the game depicts this as creating a backup of the main character’s memories. When the player reloads a save game, any memories (game progression) formed after the last save are lost.

Throughout history, many philosophers and theologians have identified personal identity with the soul. In other words, person A at time T1 is the same person as person B at time T2 if A and B have the same soul. However, this account of personal identity does not consider psychological traits like memory and desires. For example, a person that loses all of their memories due to injury is rarely ever the same. This person will usually develop different traits than they had before their injury, including different preferences in relationships. In this sense, the person is ontologically the same person as before, but relationally, they can seem like a different person altogether. 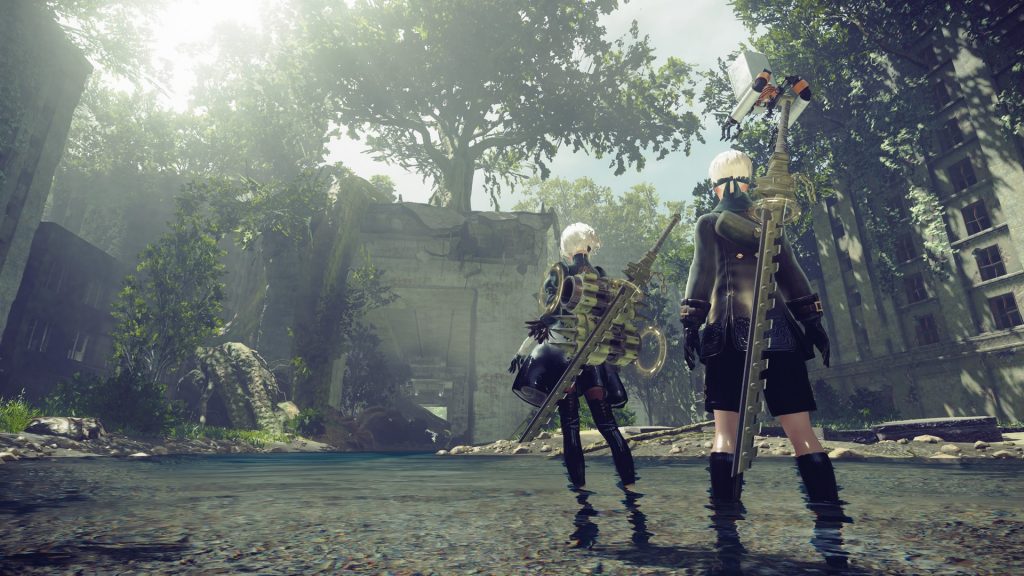 This may all seem very academic and irrelevant, but it may have real implications for spiritual formation and regeneration. Why is it that the process of transformation to Christ-likeness seems so slow? Could God not transform us immediately to be like His Son? It is possible that such a radical transformation could actually violate one’s personal identity due to the required changes in one’s soul? However, even if God can transform us in such a way and maintain our ontological personhood, what about our relationships? Maybe part of the reason that God takes his time with us, is so that we can still relate to those that have known us so that God may glorify Himself as our acquaintances witness the redemptive work of the Spirit in our lives.

Sexual Themes: Several female characters wear revealing or provocative attire. There is no in-game reason for the wardrobe choices. Optional downloadable content contains outfits that are even more revealing. An adult male character is fully nude, but the character has no genitalia, so he looks like a Ken doll. A character taunts one of the protagonists because of his hidden sexual desires.

Violence: The game depicts characters being shot, sliced and impaled. There are scenes with copious amounts of blood at various points throughout the game.

Crude Language: Several four-letter words are heard throughout the game.

Positive Elements: The game explores themes of prejudice and redemption. Several of the game’s protagonists show prejudice against a group of individuals, but eventually learn to get past their preconceived notions and hatred.

NieR: Automata is the highly anticipated sequel to NieR, which was a spin-off of the dark fantasy series, Drakengaard. Like its predecessors, the game combines shoot’em up, action-RPG and side-scroller platforming elements. The gameplay experience has both moments of brilliance and moments of frustration. However, the synergy between the different elements overcomes most of its shortcomings.

The game begins with a bullet-hell shoot’em up section which introduces this recurring mechanic. These sections are no Ikaruga, but they are satisfying to play through. The developers implemented two different modes during these sections.The first is a standard vertical scrolling shooter mode and the second mode is an isometric view with 360-degree shooting angle. The game makes great use of this shoot’em up mode during several boss fights. 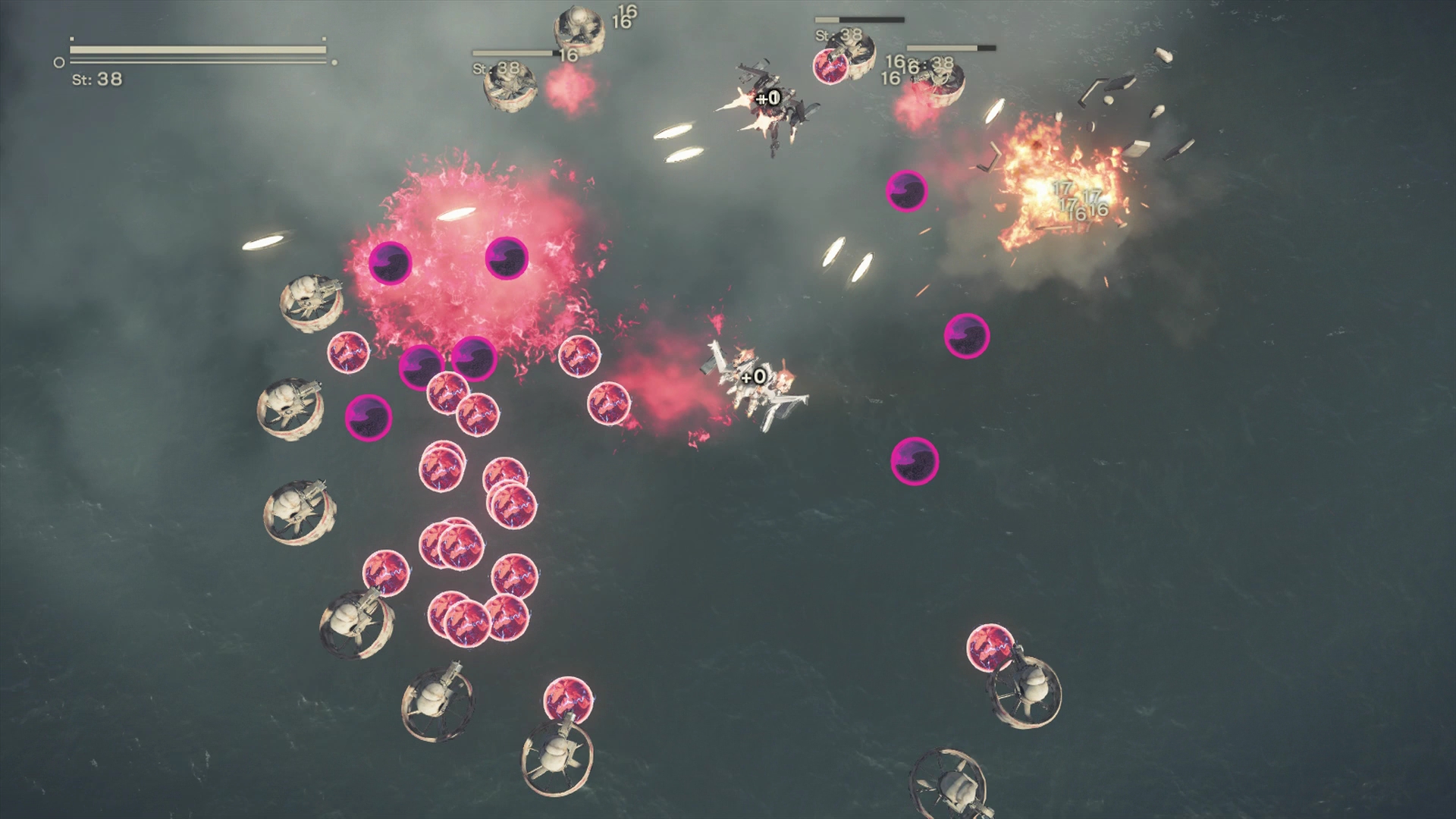 Most of the game’s action takes place in third-person view. The combat is deceptively simple yet unexpectedly complex. The player can button mash through most of the standard enemies encounters and some bosses. However, some fights benefit from a careful analysis of the enemy’s attack patterns and judicious use of the player’s abilities. The player can change between preloaded weapons on the fly to create custom combos that are both flashy and often quite effective.

Nevertheless, the game has some broken abilities—namely the dodge mechanic. The player is able to avoid the majority of attacks throughout the game, by spamming the dodge button. The combat system has the depth to encourage the surgical use of the dodge, but button mashing is often just as effective. Likewise, the player characters eventually become overpowered in comparison to the game’s enemies and the RPG elements become nearly meaningless. 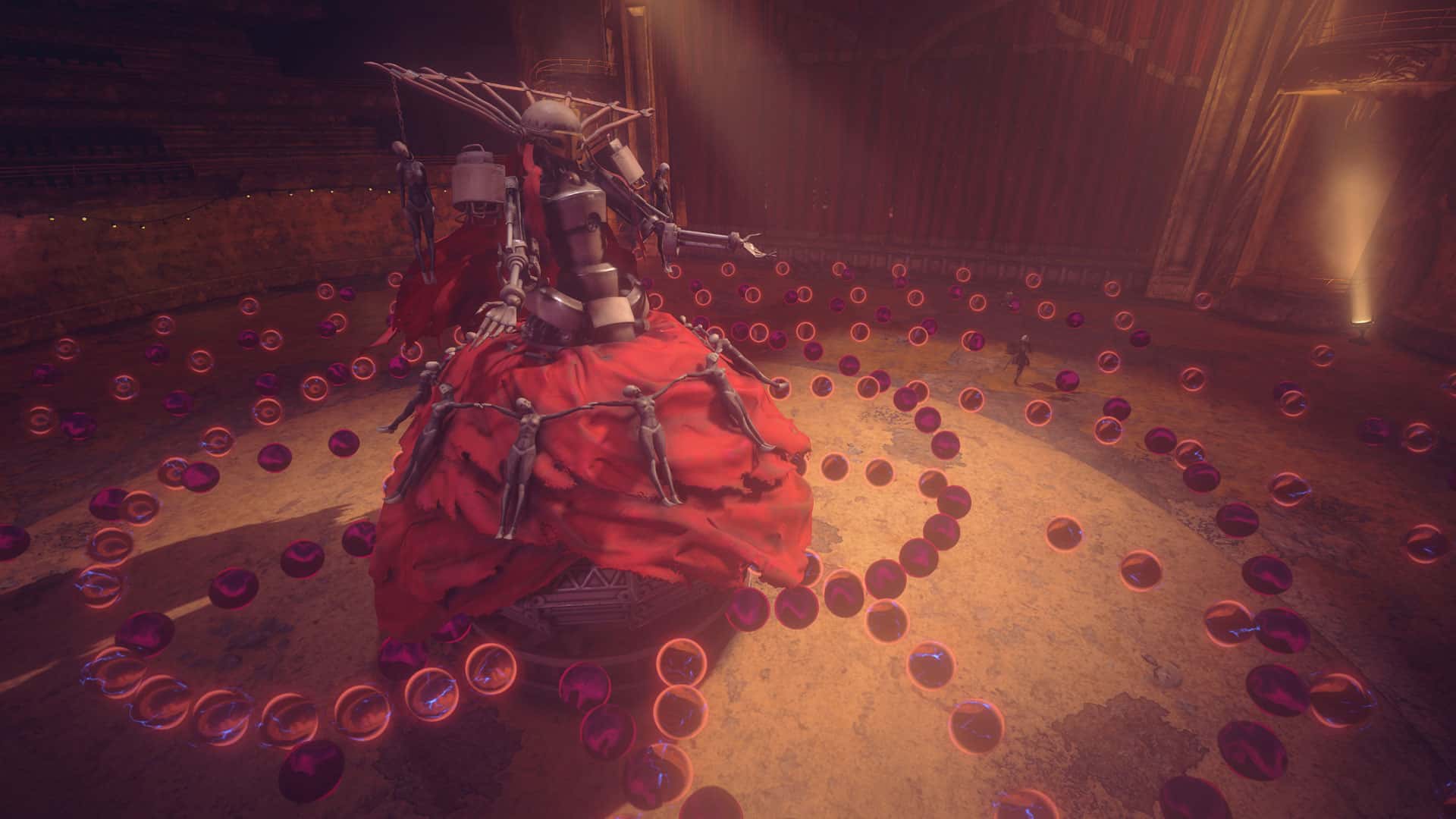 NieR: Automata’s visuals are nearly worth the price of admission alone. The game’s setting is a post-apocalyptic future where nearly everything that humanity has built is gone. However, not everything is dreary and dilapidated. The player navigates through zones with varied visual themes and contexts. The game beautifully depicts ruined city landscapes, arid desert, and lush forests. It behooves the player to take a break from the action from time to time and appreciate the aesthetics.

The game is not only easy on the eyes, but it is also pleasant to the ears. NieR: Automata masterfully weaves its visual aesthetics with a poignant soundtrack. Each song seeks to elicit an emotional response from the player. Some tracks are cheery and light-hearted, while others are somber and tragic. In fact, the powerful emotions evoked by the soundtrack are only heightened as the player progresses through the story and begins to understand the plight of the main characters. 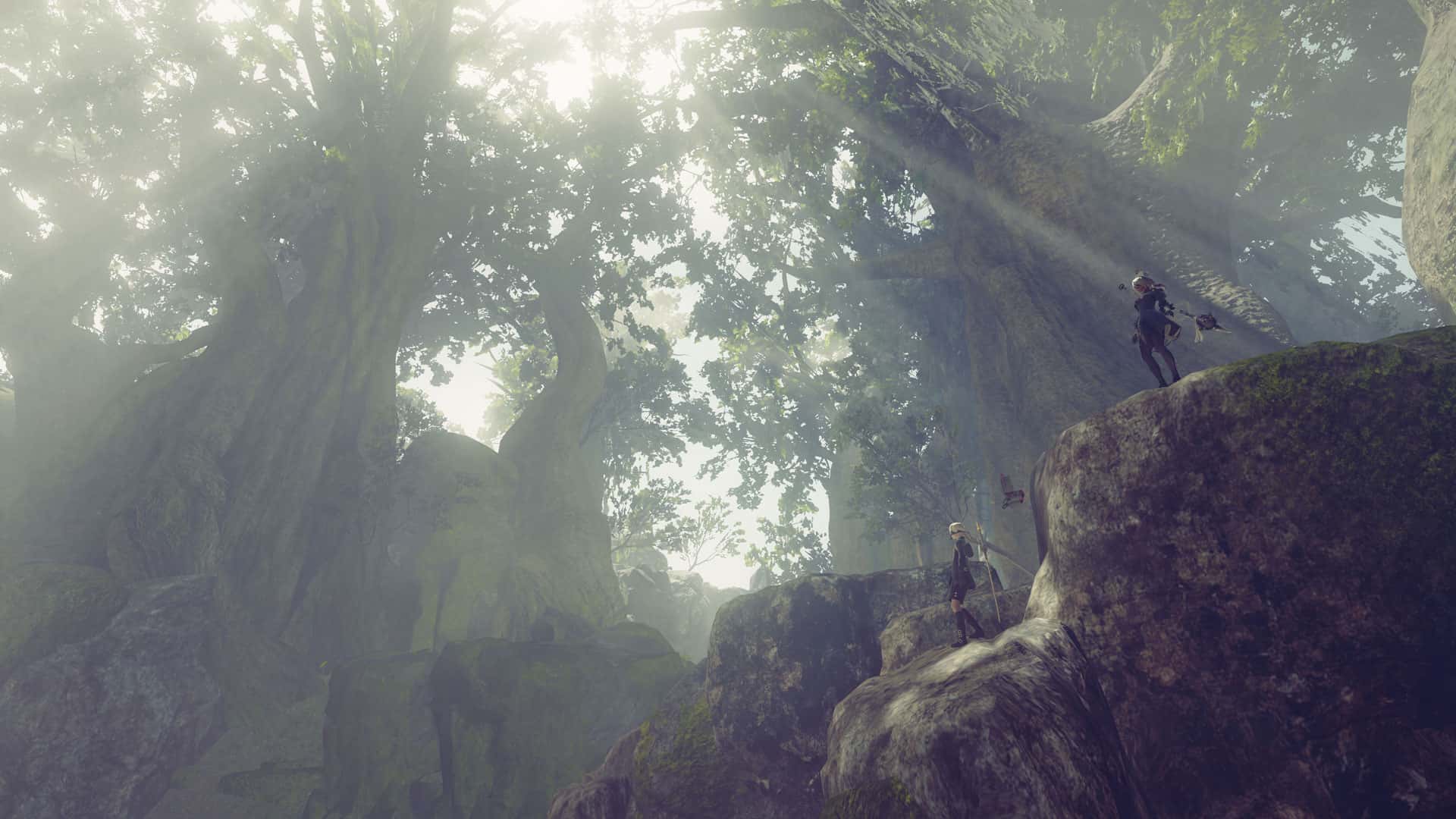 However, the amazing visuals, soundtrack, and gameplay pale in terms of memorability to NieR: Automata‘s setting, atmosphere, and story. From the options menu to the open-world, every element in the game serves to drive the story or flesh out the setting. For example, reloading after dying isn’t a meta-action rather it has an in-game explanation. Likewise, the settings in the options menu are a part of the game and not a break from it.

The game follows the events surrounding several androids who are aware that their sole purpose in life is to live and die “for the glory of mankind.” This concept sets a melancholic atmosphere with fatalistic undertones, as the player’s actions are not for the benefit of the protagonists, but for benefit of unseen masters. The developers pull at the player’s heartstrings by revealing the emotional struggle of the game’s protagonists and how they toil and suffer to fulfill a mission they don’t fully understand. 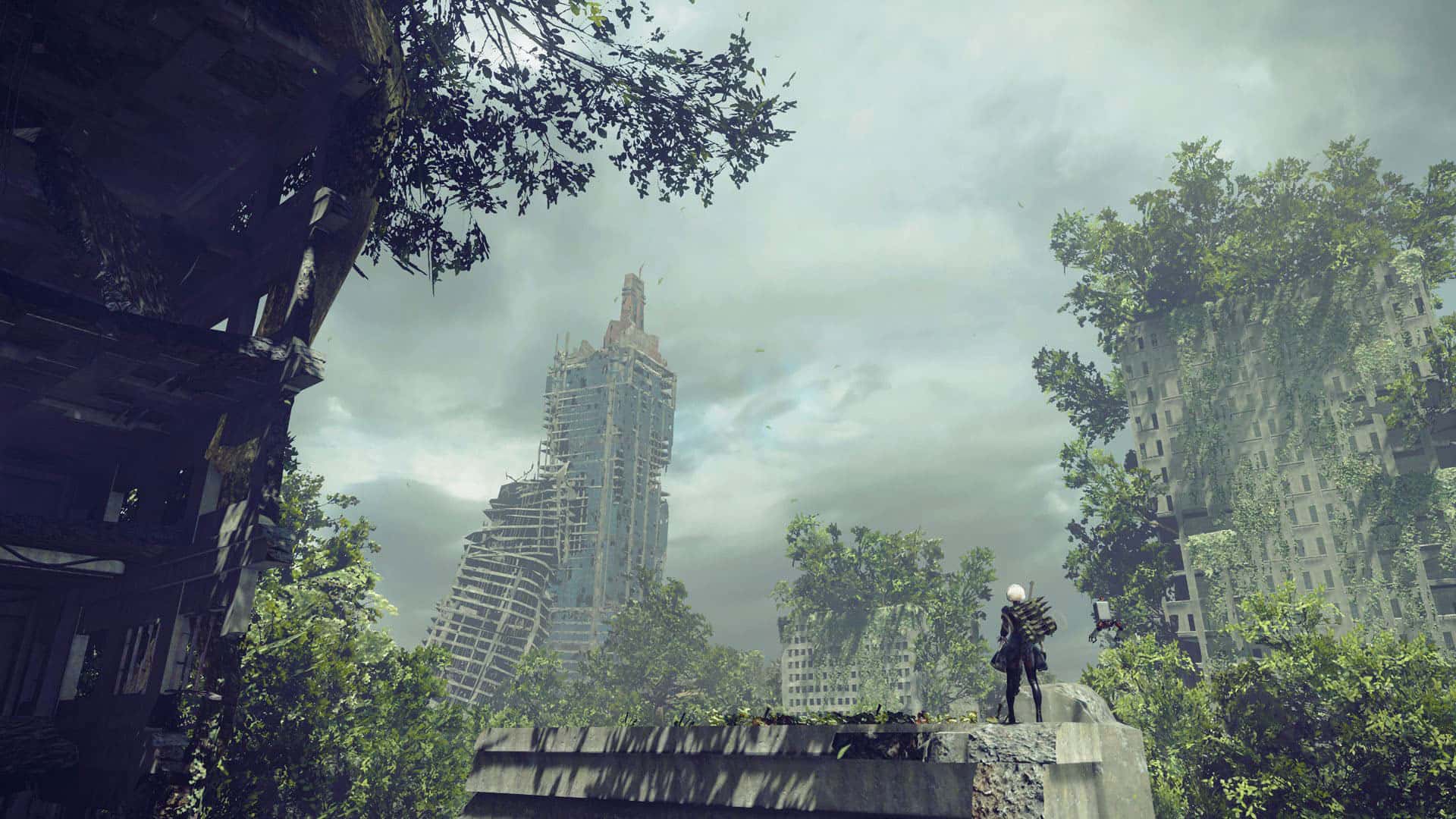 Additionally, the game has 26 endings. Most of the endings are gags—a penalty for performing an action you shouldn’t at a particular point in the narrative. For example, running in the opposite direction when instructed to head directly to a major event is such a trigger. Furthermore, the player can experience one particular ending at any point in the game simply by removing a vital piece of equipment from their character. Nevertheless, there are several endings that are “real” in the sense that they occur at the end of the game and the player brings them about through their choices an actions.

Despite the high praise, the game is not without its flaws. PlatinumGames did not optimize the PC port well, and as a result, there are long load times and some visual glitches. Occasionally, the game would crash at random points throughout the game, but most often the crashes occurred when loading from a save. NieR: Automata also has some strange design issues. For example, the game does not always make it obvious that the player would experience one of the many endings by performing certain actions. This, in turn, could result in a loss of progress as the game would show an ending screen and then reload the last save. I lost a considerable amount of progress several times because of this.

Nevertheless, NieR: Automata’s few missteps and flaws do little to mar the shine of this gaming gem. It is a game that showcases many of the best elements of the medium and masterfully uses them to tell a moving and captivating story. Platinum Games outdid themselves and created a game that is a must-play for any serious fan of RPGs and action games. The story and gameplay in NieR: Automata are simply too compelling to allow its imperfections to prevent me from seeing this wondrous game to its conclusion.

NieR: Automata is a modern masterpiece.

I am a devoted husband and a loving father (claims to be validated by my wife and kids). I am a Software Developer by day and an aspiring Philosopher by night...and day. I enjoy analyzing the cross-section between faith and geek culture and, in particular, attending to the unique advantages and challenges being a member of geek fandom present to the pursuit of Christ-likeness and spiritual formation.