When I first played NieR Automata a few years ago, I was blown away by the inventive ways it told its somber story and varied its gameplay. But while I had heard of its PS3/Xbox 360 predecessor NieR, I’d never played it. Now that decade-old cult classic has been remastered for current hardware as NieR Replicant ver. 1.22474487139…, and I was eager to see how the two compared and how well the older title holds up after all these years. What I discovered is a fascinating, innovative game that can still hang with the big boys today. 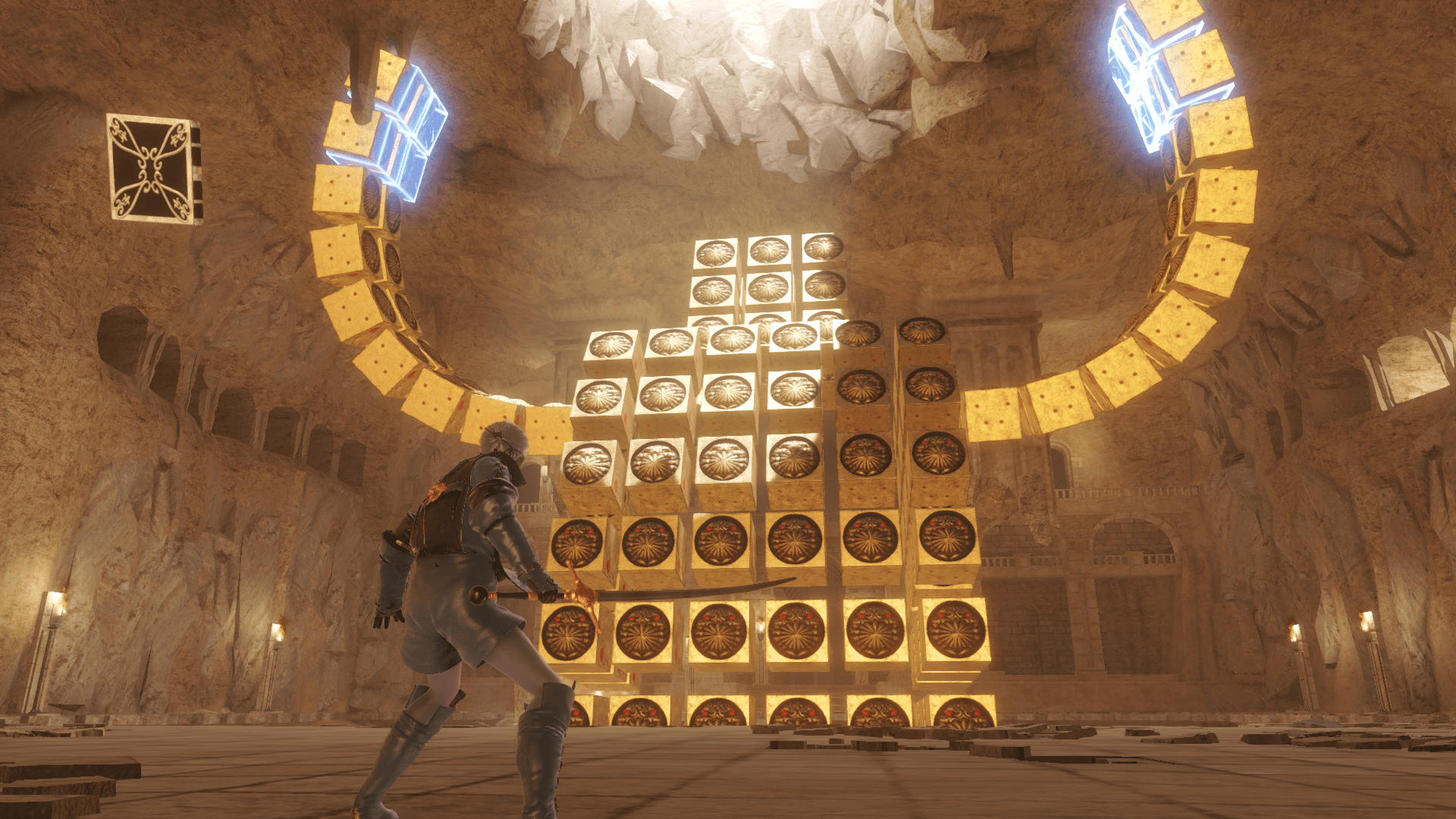 Violence: You spend much of your time in the game hacking away at monsters and robots with swords and spears. Blood splatter appears whenever non-robotic characters take damage, and both human and animal corpses can be found on the ground at times. Some characters are impaled by weapons, but the game otherwise does not contain any gore.

Sexual content: A major female character in the story always runs around in lacy underwear, and the camera lingers on her butt on a number of cutscenes. Some of the other female NPCs reveal a lot of leg with their attire. There is LGBT+ content in the game, but I cannot be any more specific without risking spoilers. 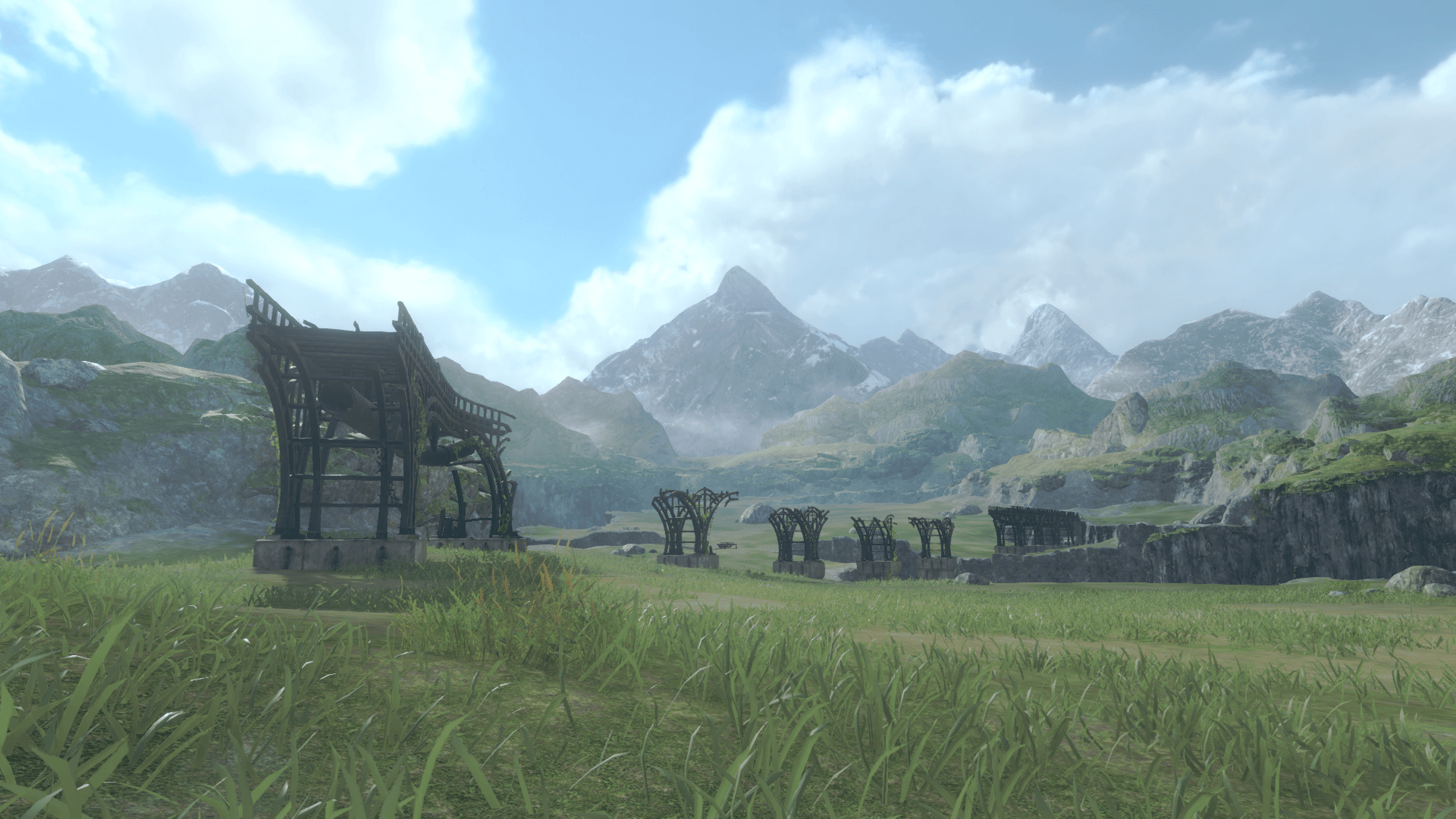 Language: All manner of profanity—f**k, s**t, a*s, b***h, g*d d**n, etc.—appear in the game, especially from one major character who utters these curses on a regular basis.

Spiritual themes: Magic plays a significant part in both lore and gameplay, as characters—including the player character—wield magical powers to assault their foes.

Drugs/Alcohol: A couple of taverns exist within the game’s towns, and several people reference drinking alcohol or getting drunk. One man neglects his kids in order to drink, and a couple of people offer to drink with the main character, who turns them down. 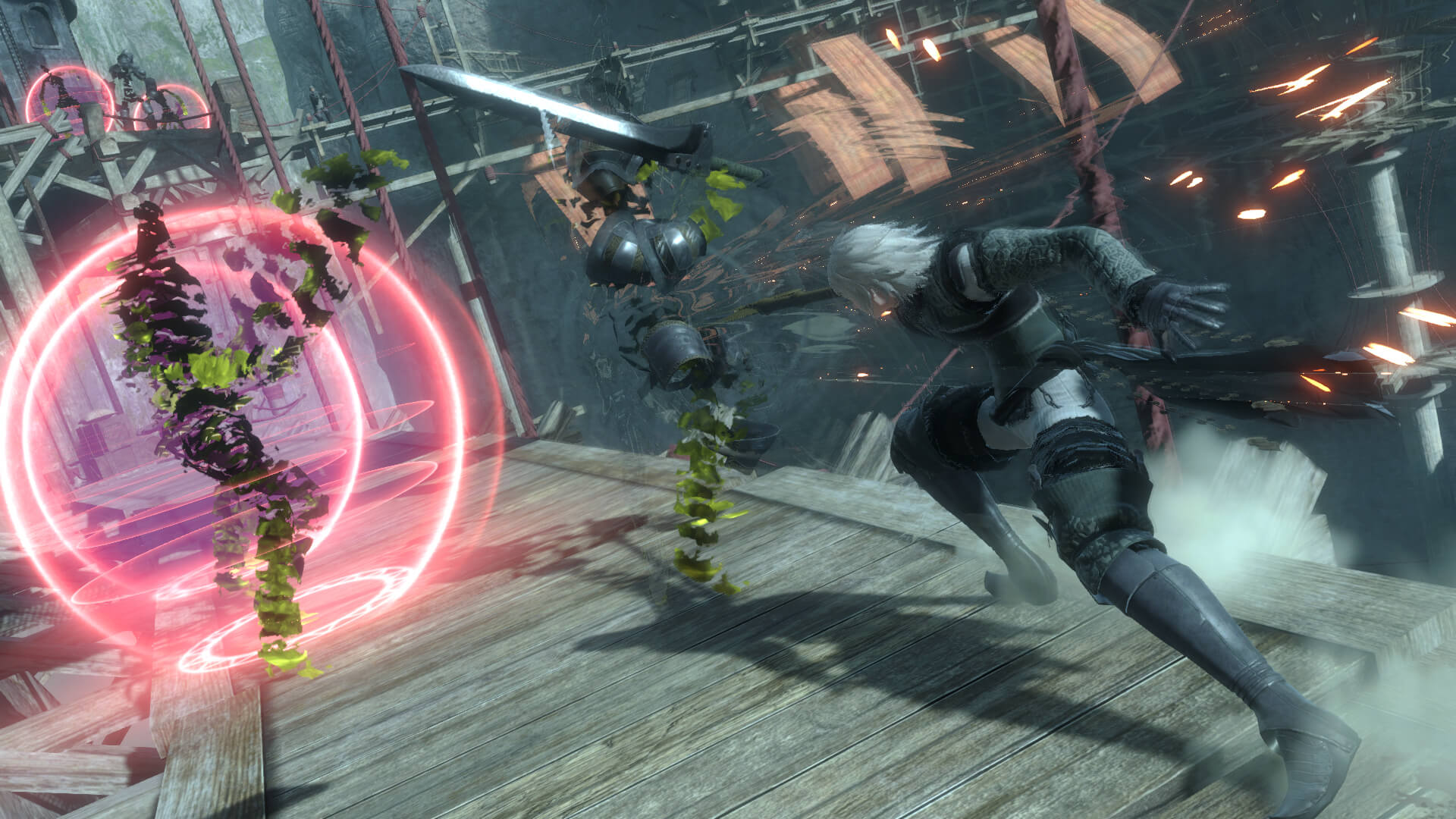 NieR Replicant takes place over a thousand years in the future, after a mysterious disease called the Black Scrawl caused modern-day society to crumble; humanity, still dealing with the plague, has been reduced to medieval technology. Now, a teenage boy—who, for the purposes of this review, I will refer to as Nier, although you can give him whatever name you want in your playthrough—ventures out beyond the comfort of his village to find a cure his little sister Yonah who is slowly dying from the disease. Along the way, he befriends an eclectic cast of characters and uncovers dark secrets that have been hidden for eons. 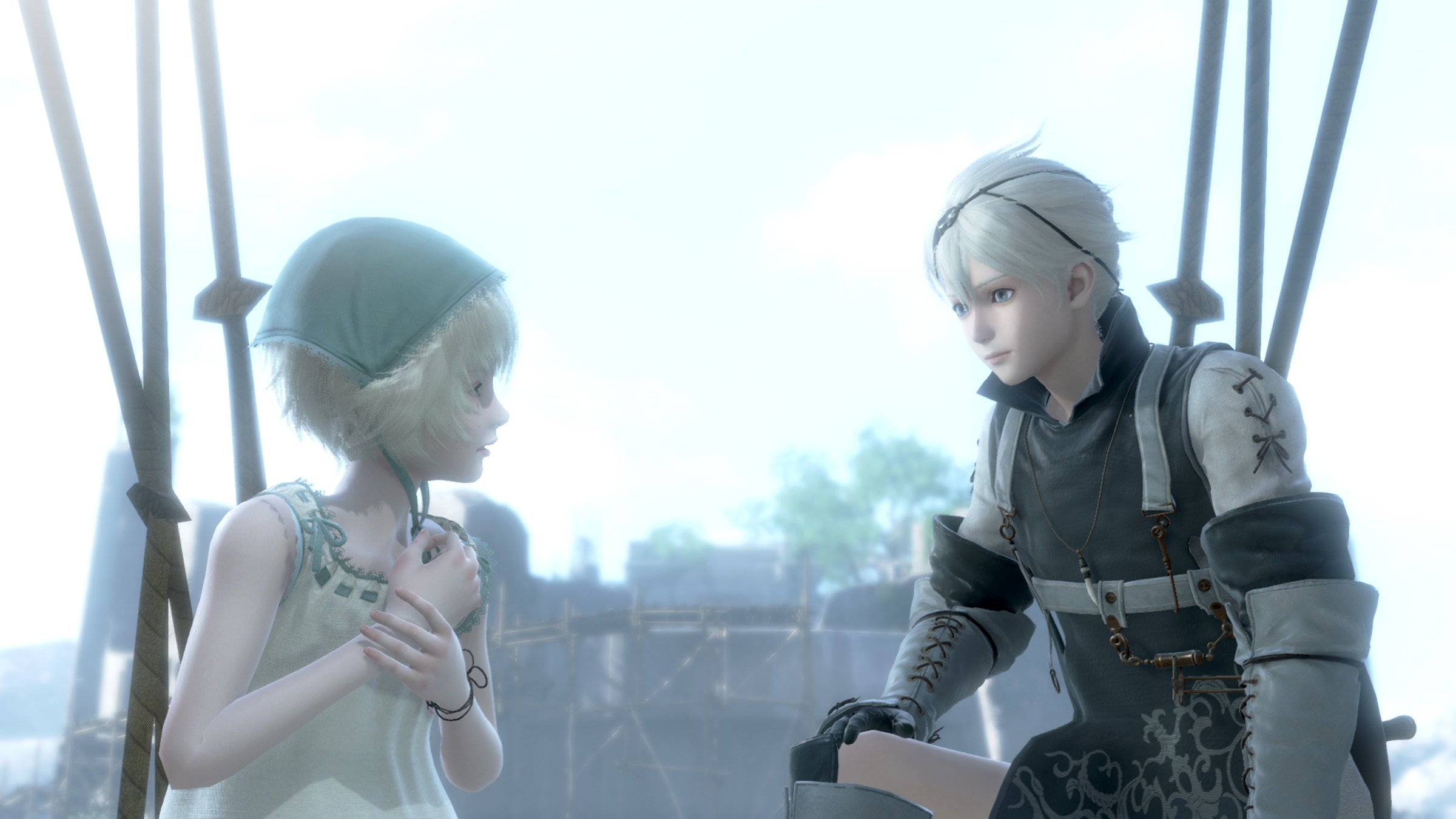 I love the characters that you meet and interact with throughout the story, particularly your travel companions: Grimoire Weiss, a floating, talking book with magical powers and highbrow mannerisms; Kainé, a scantily-clad young woman with a fiery temper and foul mouth; and Emil, a young boy with a big heart, innocent demeanor, and an impressively resilient attitude in the face of many hardships. Nier, too, boasts a distinct personality, as he is generally laid-back and eager to help others, but also headstrong and a fierce defender of his friends. All these personalities play off one another beautifully, and at times hilariously. Weiss and Kainé’s interactions stand out in particular; the excellent voice acting turns their vitriolic bickering into hysterical comedic relief, and it develops a layer of nuance as the two characters come to care for one another over the course of the game. 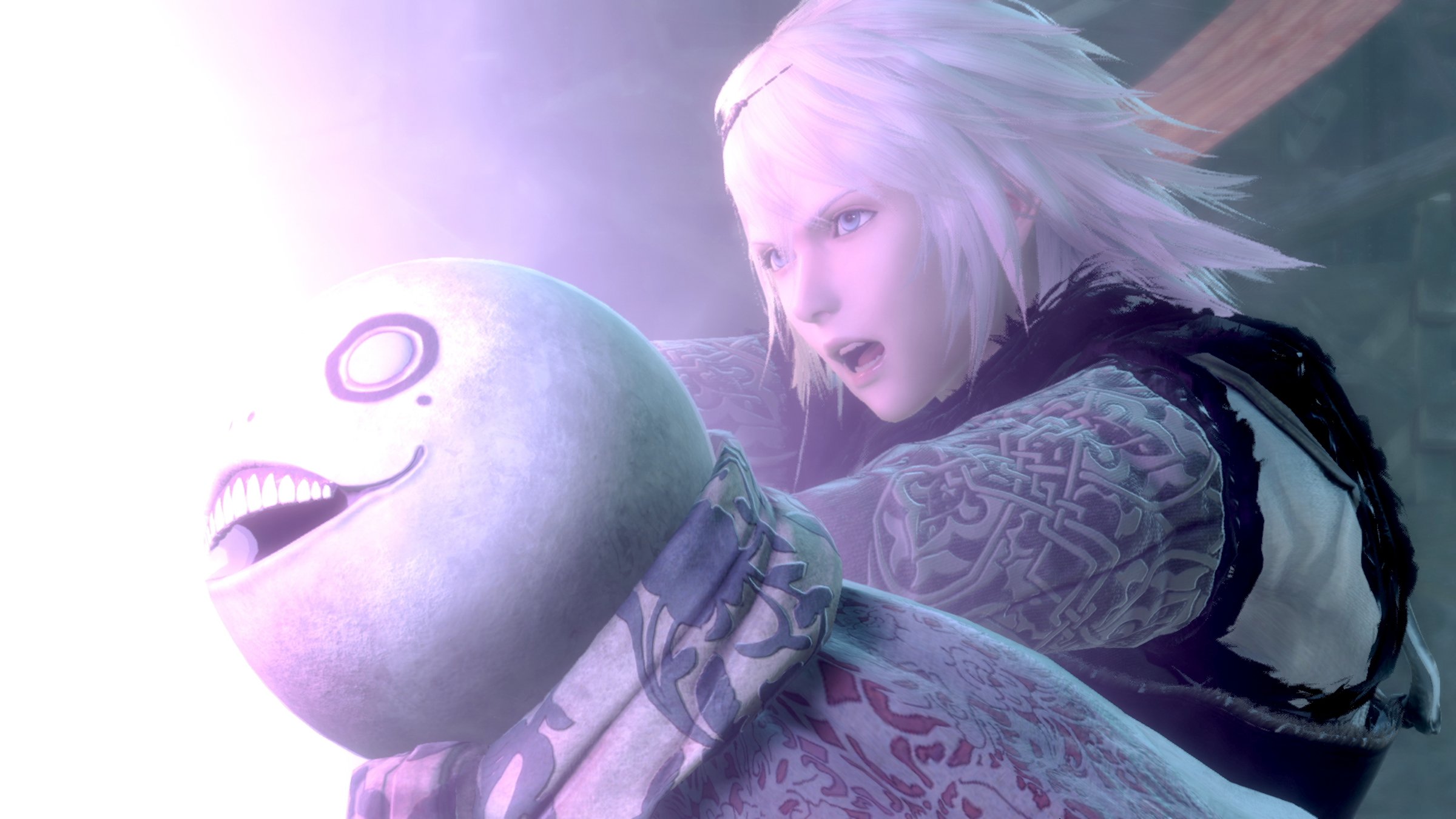 While the characters delighted me from start to finish, the main story did not, as it proves too ambitious for its own good. I do appreciate the game’s unique approach to story structure, revealing new context, information, and the potential for new endings as you replay the story. The developers even went the extra mile in adding a fifth ending to this remake, an ending that did not exist in the original release. However, even when taking these factors into consideration, Replicant struggles to bring all of its disparate pieces together into a cohesive whole. The game teases complex concepts early in the story, but does not get around to explaining them in sufficient detail until the very end when they don’t have enough time to breath—and even then, some of these significant elements receive only a little attention in these final stages. Some of this is due to the fact that the game’s lore stems in part from the PS2 game Drakengard, but not all of the blame can be placed on this limitation, as the game fails to do justice to some of its own original content as well.

As for the differences between the endings themselves, my feelings are similarly mixed. While I found reasons to appreciate each of the game’s main endings—and by that I mean endings C, D, and E, as they represent the most complete conclusions to the game’s story—none of them feel wholly satisfying to me from both narrative and thematic perspectives. At the very least, they all provide interesting dynamics to analyze, which I consider a success. 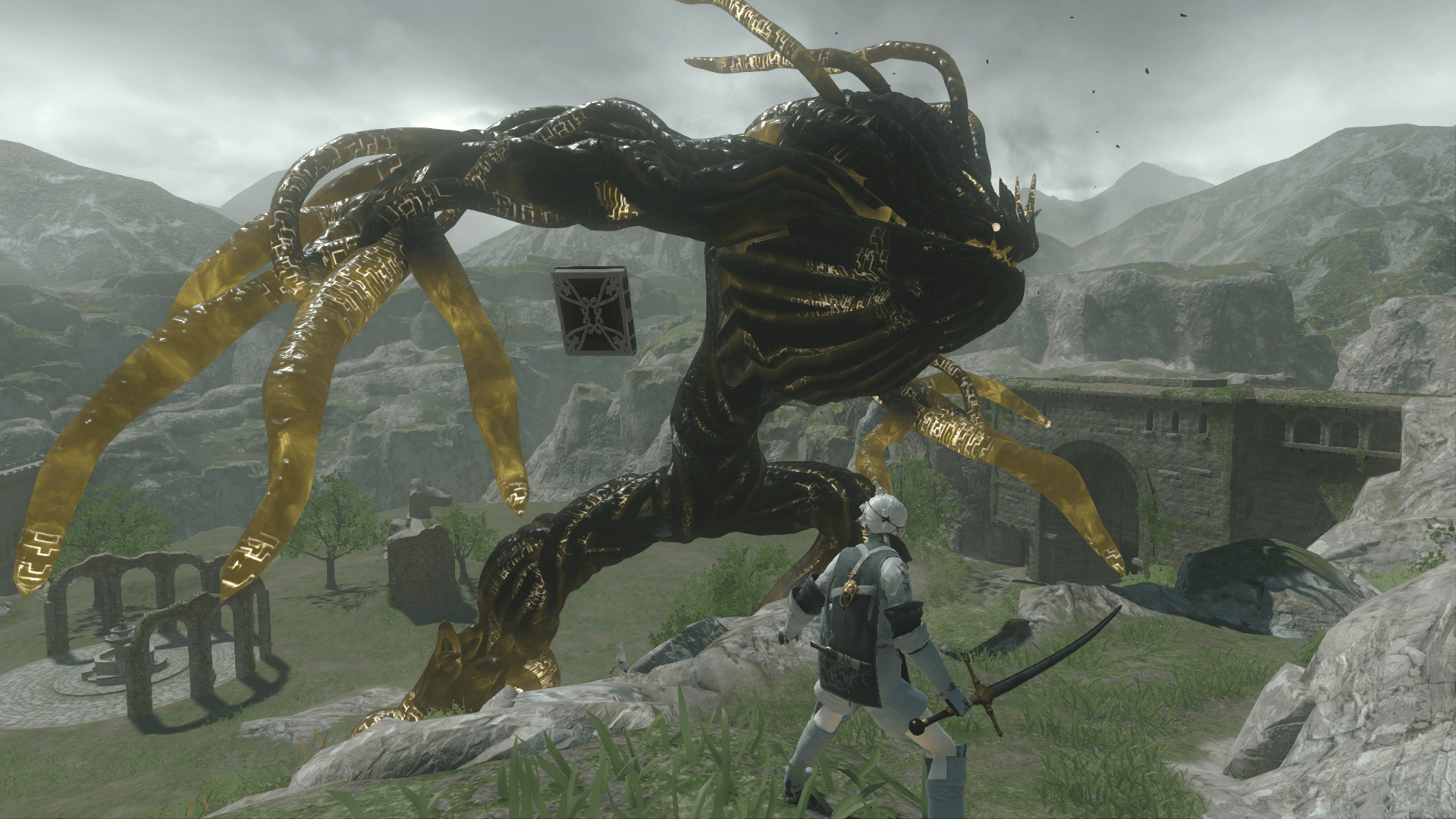 In regard to gameplay, I’m pleased to report that NieR Replicant holds up remarkably well in this remaster. The core hack-n-slash combat is slick and responsive, and Weiss’ array of magical attacks, along with the option to choose between three different types of melee weapons, allows a degree of customization for differing playstyles. Even more impressive are the creative ways that Replicant mixes up the gameplay from time to time, primarily by changing the camera angle; normally you view the world from a typical over-the-shoulder perspective, but at certain times the camera will shift to a 2D, top-down, or even an isometric view. This change alone, without altering any other gameplay mechanics, makes the experience feel fresh and dynamic. In one dungeon, the game creates a puzzle-like atmosphere by temporarily removing certain standard abilities and challenging you to defeat enemies or navigate rooms without them; yet another area briefly turns the game into a text adventure. Also, Replicant’s boss fights each boast unique attacks, weaknesses, and moving patterns, which makes all of them fun and memorable in their own ways. This incredible variation of gameplay design married to a solid foundation of action-driven combat wasn’t just ahead of its time at its initial release—it’s exciting and distinct even today, surpassed only by its sequel Automata. 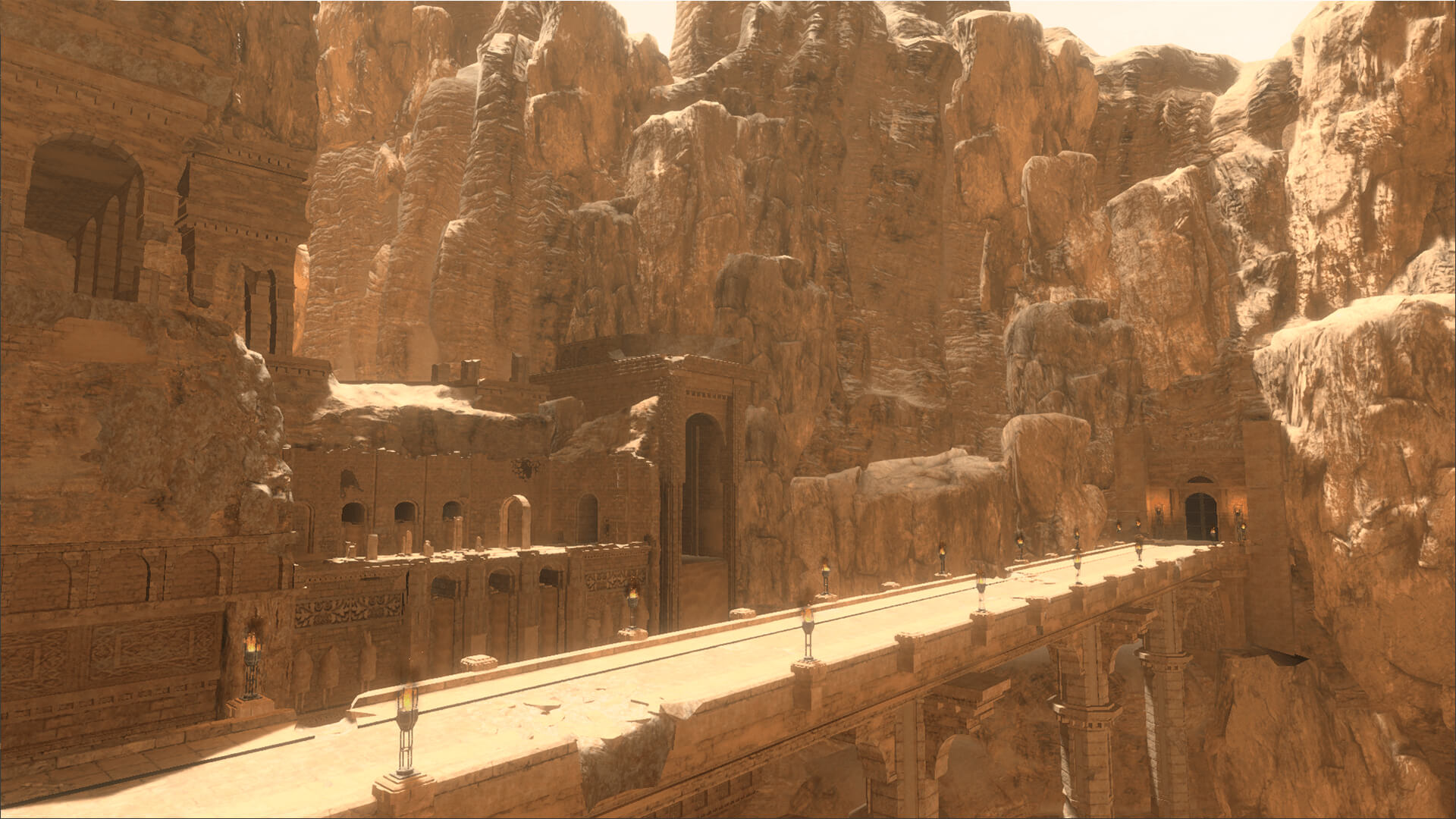 That isn’t to say that Replicant’s game design doesn’t have any flaws, however. The fishing and gardening activities, for example, are so boring and inconsequential that they provide no real value to the overall experience, and it’s a mercy that they play no part in the main questline aside from having to catch one fish. Also, the game does indeed feel rather dated in some ways. The game world is quite small by today’s standards and is divided into numerous sections that are stitched together with loading screens, although the power of next-gen hardware keeps these loading screens quite short. And while the game contains plenty of side quests to keep you busy, far too many of them are boring fetch quests that require you to grind in dungeons or meander through the overworld in search of the desired items, some of which are better used to upgrade your weapons. Unfortunately, if you want to see all of the game’s story, you’ll have to complete at least some of these fetch quests; the C, D, and E endings can only be accessed if you purchase all of the game’s weapons, and you can’t afford that without finishing around half of all the side quests.

On the topic of side quests, some of them are incompletable after reaching a certain point early in the game, and you don’t receive any warning about when this point will arrive. Thankfully there are enough side quests available afterward, but it still annoys me, not only because it frustrates the completionist within me, but also because I missed out on finishing at least one side quest that actually has an interesting story attached to it. 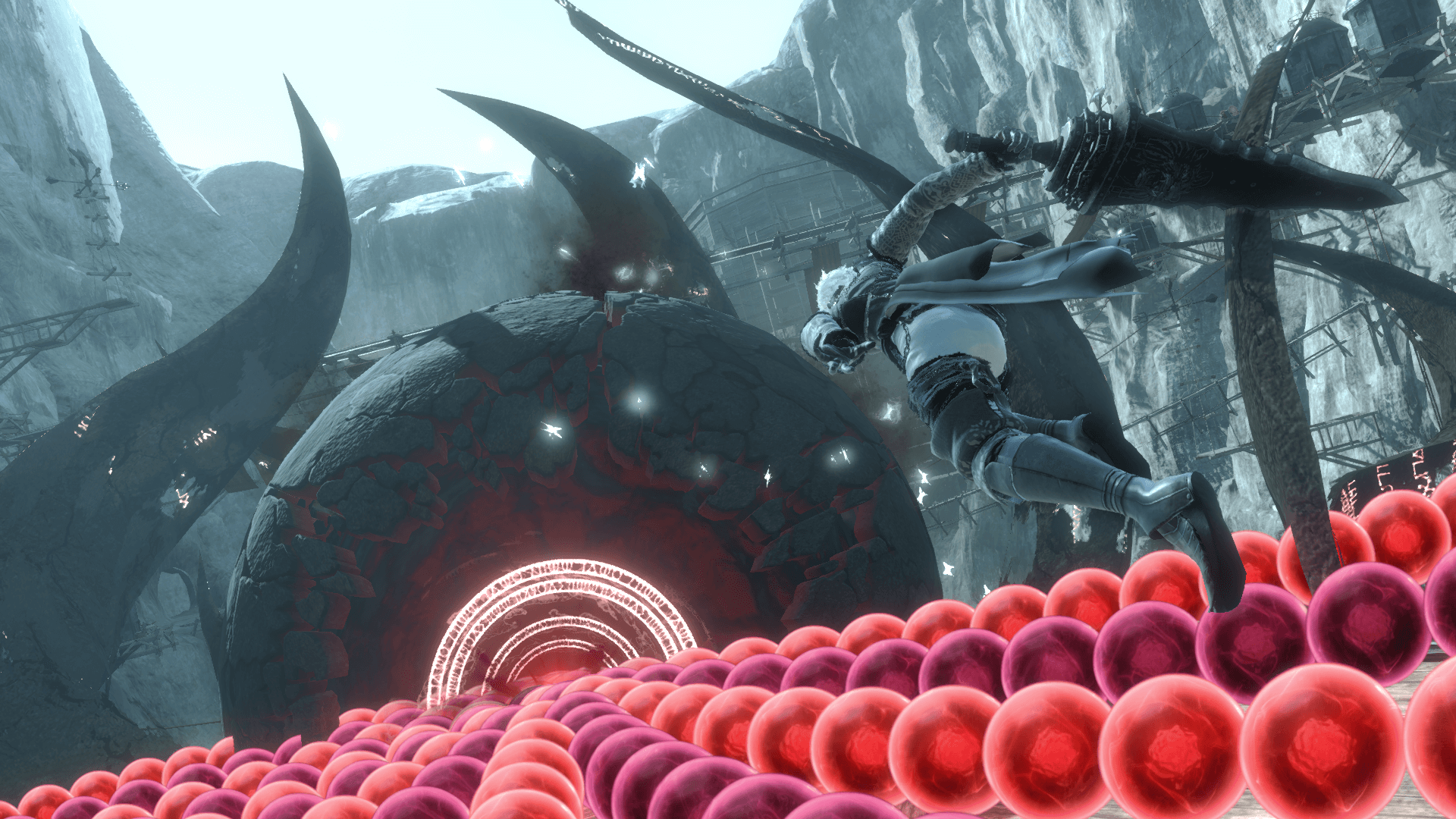 I would be remiss if I didn’t talk briefly about Replicant’s audio/visual design. From a visual standpoint, there’s no getting around the fact that this is a remaster of an older title, for better or worse. Character models see a marked improvement over their original incarnations, and the solid art design still gives each region of the game world—from the Grecian-style architecture of Seafront to the sand gondolas of the desert city Façade—its own feel; however, the pathways connecting each major location are mostly bare and uninteresting. The soundtrack remains phenomenal, though, as the beautifully composed orchestral tracks shift between sweeping and adventurous to somber and dramatic. I could listen to Song of the Ancients and Kainé’s theme all day.

All told, NieR Replicant is a great game, and one that has clearly benefitted from this remaster. Yes, the game has its flaws—namely the insufficiently explained story and the abundance of uninteresting fetch quests—but it rises on the strength of its characters, combat, and the creative ways it mixes up its gameplay. Its concepts were ahead of its time and remain fascinating and unique to this day. Furthermore, I now have an even greater appreciation for NieR Automata, which masterfully built upon the solid foundation of its predecessor. I think this has put me in the mood for another playthrough of Automata, in fact. Just one NieR wasn’t enough. 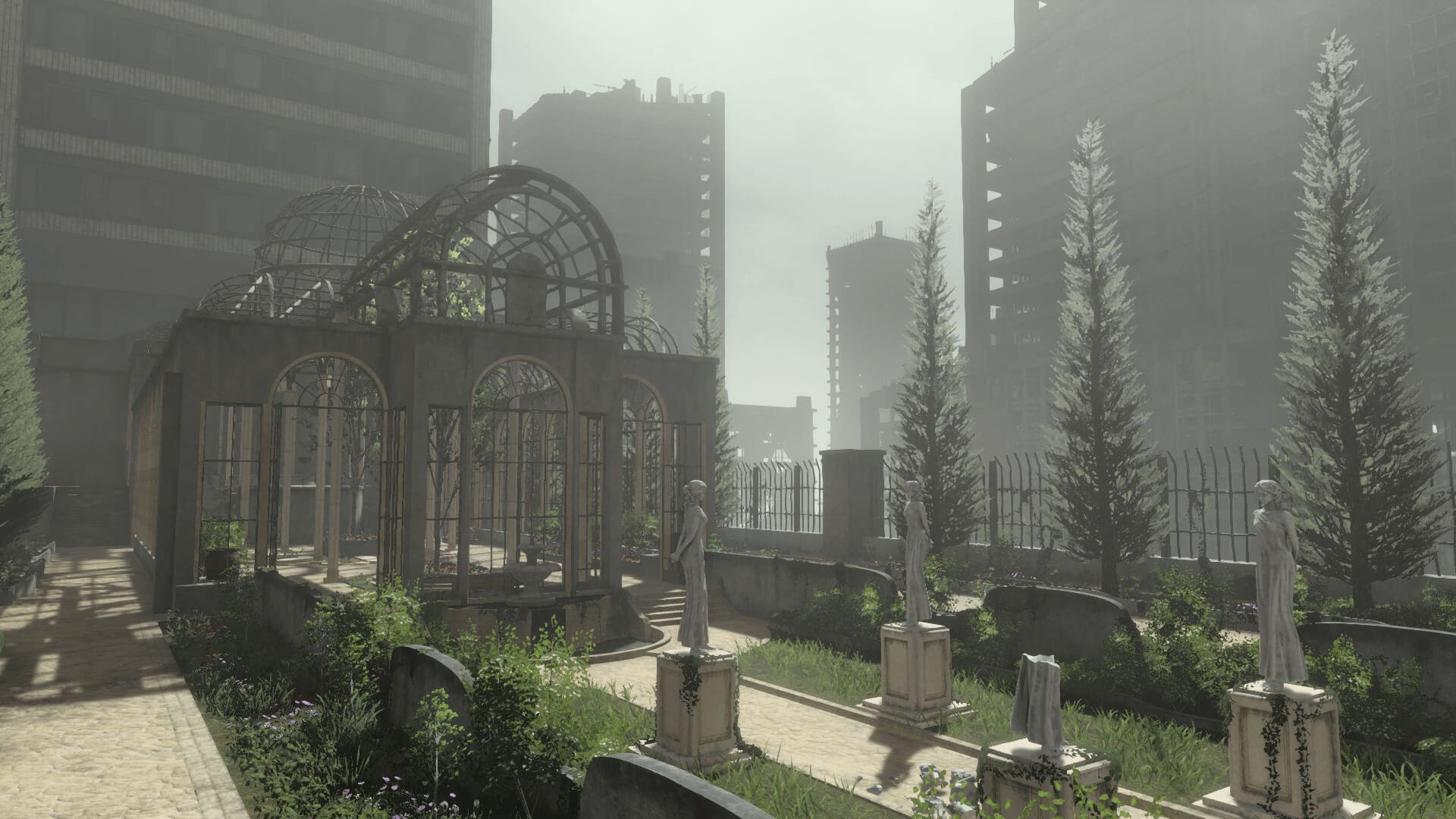 NieR Replicant's loveable characters and creative mix of gameplay allow the game to hold its own over a decade after its original release.