No Straight Roads, developed by Metronomik, is an action-adventure game that subsumes rhythm as a significant portion of gameplay. Players take the role of two members of an indie band bringing back the popularity of rock and roll to a town where it’s best musicians are all EDM. The small Malayasian game developers utilize well-known artists and experienced designers to bring the harmony of music and games. 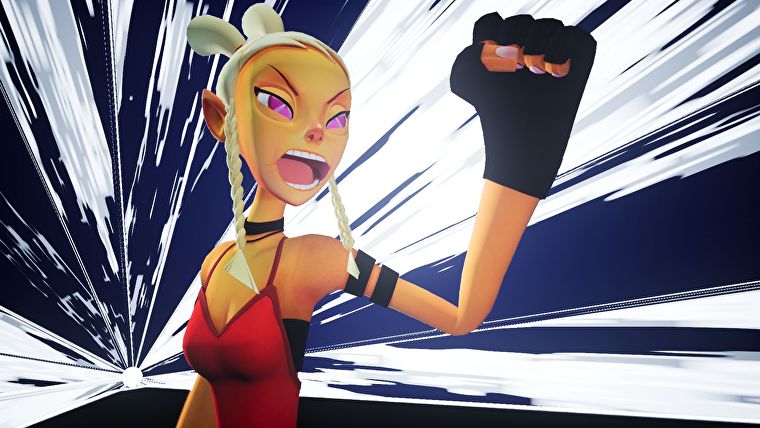 Language: D*** is used three times towards the end of the game.

Violence: I cannot express the joy I have to say this in a gaming article: You literally fight with the power of music. The characters bash with their drumsticks and guitar, and you can gather musical notes for ranged attacks. That’s more than Brutal Legend can say! 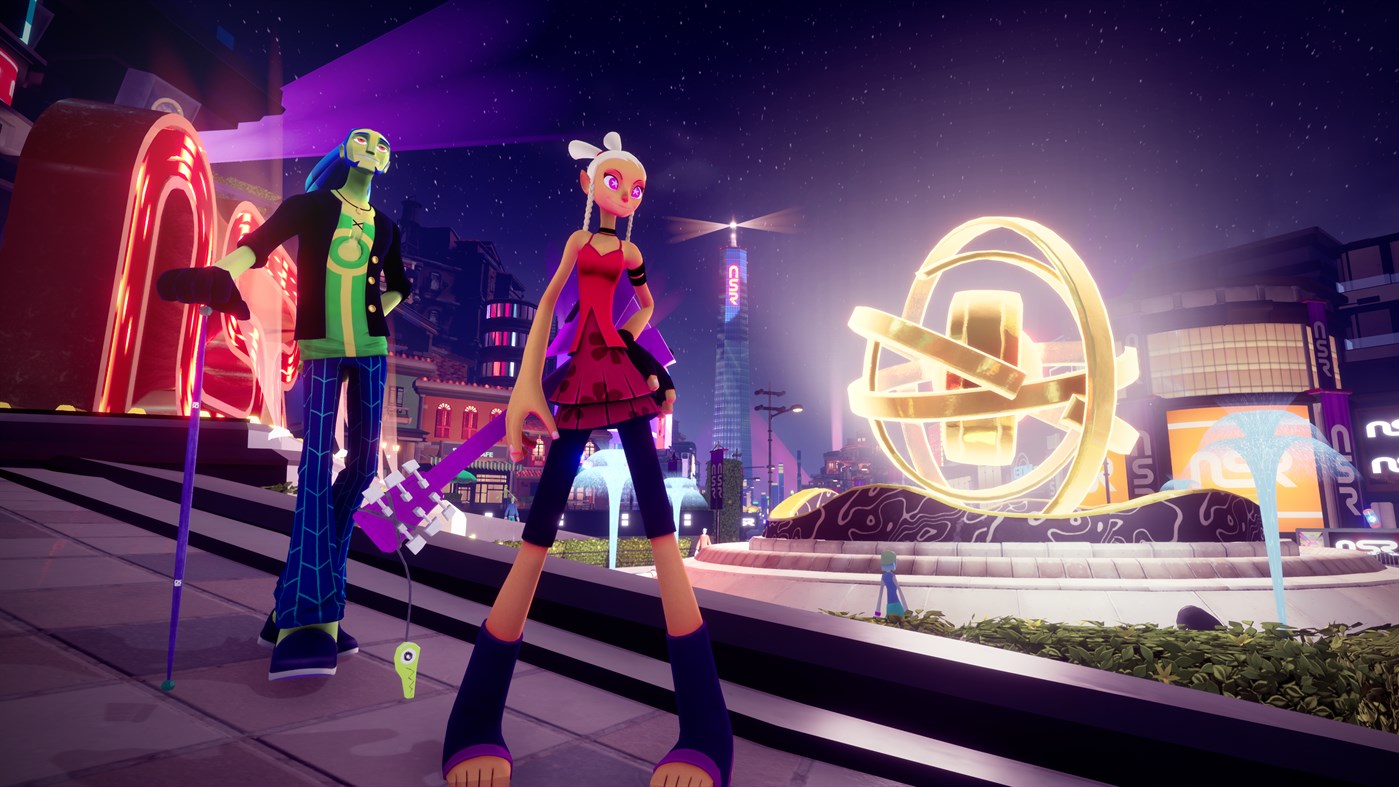 This city WILL BE built on Rock and Roll!

The game takes place in Vinyl City, a large, modern-day civilization powered by music. The energy from the hordes of music fans powers the city’s energy source called the Qwasa, and artists who prove they can excite the crowd have the chance to join No Straight Roads, the corporation overseeing all of Vinyl City. Open auditions are welcoming the new indie band, Bunk Bed Junction. The band’s members, guitarist Mayday and drummer Zuke, display their passion for music and rock as they smack enemies with their music-themed attacks; this also serves as a tutorial for the player, teaching them how to jump, attack, and listen to the music in order to predict enemy attacks, as the enemies all attack on beat.

We also get a feel for the characters. Mayday is the highly energetic, loud, confident, and honest teammate; her expressive and humorous personality makes her one of my favorite main characters to come from an indie game in a long time. Zuke, meanwhile, is easy-going, soft-spoken, keeps things to himself, and helps keep the two in balance.

Shortly after Mayday and Zuke’s performance, however, Tatiana, the leader of NSR’s EDM (Electronic Dance Music) empire, shoos them away, telling them that rock is dead. The duo is saddened by their loss, but notice that their performance was flawless, bringing a lot of literal energy to the city. Nevertheless, a city-wide blackout ensues, and NSR keeps the backup power for itself. Bunk Bed Junction then takes action to start a rock revolution and bring down NSR!

No Straight Roads is an area-by-area style advancement. Players take on the music-themed leader of a city district, obtain their platinum disc, and move on to the next, until they reach the NSR tower. There are five total districts, each themed on their respective ruler. For instance, the district run by the bubbly mermaid Sayu is inspired by Tokyo aesthetics, complete with bright neon buildings, televisions screens all playing a Sayu commercial, walkways with bright pink glass guardrails, and holographic dancing Sayu pictures. 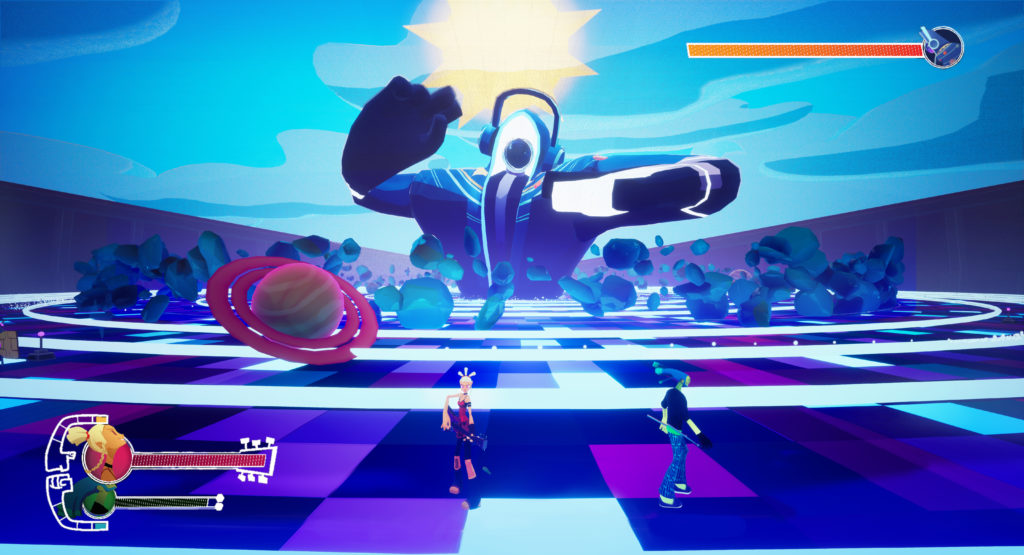 Get down with the sickness!

Speaking of inspiration, the art is inspired by games like Psychonauts, with red and green skin colors and outrageously large hands. Some characters have a plasma tv for a head, some have weird pupils in their eyes, and some just flat out have fire for hair. It’s quirky, but it fits, being complementary to a fantastical world of music-engineered electricity, a city built on a turntable, and indestructible instruments.

Gameplay can be seen as simplistic on the normal difficulty. Players can bash and crash their way through No Straight Roads in one sitting, without an ounce of rhythm. But hidden on the B-side, there are higher difficulties that require precise timing and truly employing the strengths of both characters. I love how the boss’s attack patterns become more complex when you replay them on Hard and Crazy modes. Things like musical notes and parry objects move around faster in sync with the jams, but even boss-specific things will pop up and throw off your groove. Case in point, the mermaid Sayu, manned by four talented artists, uses computer graphics to fight. A mouse cursor will appear on screen and click players for damage. And on harder modes, two cursors will go after Mayday and Zuke. 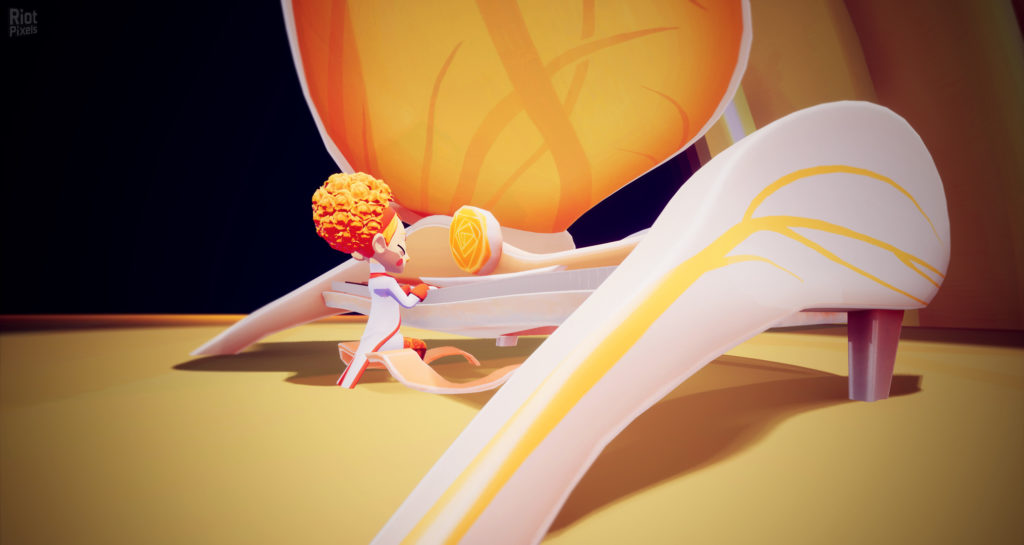 Another part of the musical scuffle is parrying. This skill can go unused for at first, until you get to higher levels where it becomes more critical. Like Cuphead, certain enemy attacks will glow pink, and with the right timing players can hit them back for some extra damage. It can be extremely satisfying nailing an attack on beat.

Each member of Bunk Bed Junction has a unique skill tree for upgrading skills and abilities. Zuke is quick and chains long combos together. His other skills support Mayday, who is slow but hits hard. There’s thing on the battlefield that are little satellites activated by music, known as transformers. They will activate different things depending on the musician. Zuke will activate supportive elements, while Mayday will unleash ranged projectiles. But she takes longer to activate them, while Zuke can turn them on almost immediately. These elements become crucial, when deciding how to best gear up the band.

Outside of battle, Vinyl City is also explorable! First, there’s Bunk Bed’s Junctions base: the Sewer. It’s the place to view your collectables, find the skill tree and sticker attachments, and much more. You can befriend people in the street and they will come and join you, like a pirate radio host, and a robot! You can also meet Zuke’s pet alligator, Ellie.

The town has nooks and crannies all over. There are rooftops to jump on, doors to unlock, and electronics to power up. The collectibles add a little bit of background to the EDM artists, so players get to know them a little more. Stickers are buffs for Bunk Bed Junction to put on their weapons, increasing things like attack, speed, parry power or finishing strength. 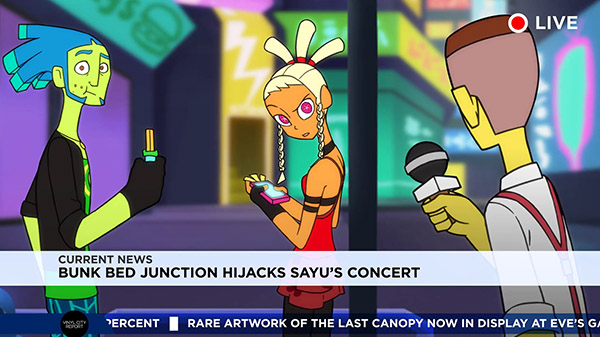 I’ve saved the music for last, because it’s the best part of No Straight Roads. Artists James Landino, Andy Tunstall, Nikki Simmons, Funk Fiction, Masahiro Aoki, Falk Au Yeong, and others lend their talent to this soundtrack, and blend genres like classical, hip-hop, pop, techno, orchestra, and of course rock into a genuinely unique experience.  Each boss comes with their own track which shifts in style between EDM and rock depending on which side holds the upper hand in the fight.

One optional side quest involves Zuke’s brother DK West, a burly character who speaks Bahasa Malay and challenges Zuke to a rap battle. These boss fights sport their own distinct musical style and rhythm-based gameplay mechanics, adding further variety to the overall experience. They also reward ultimate moves for Bunk Bed Junction, and provide Zuke with some decent character development as well.

Speaking of development, there were some tiny bugs I experienced during my playtime. They were things like the camera, and characters moving on their own, not having the ability to switch between Mayday and Zuke, or interacting with objects. Going back to the Hideout and returning fixed the issues. Also, I still can’t figure out how to play the Perfect Parry mode, even though I unlocked it.

And the game is so short! I didn’t want it to end! There was so much to enjoy about this game, but also so little of it. There were real moments between the characters at times. The voice acting is top-notch, the story reached a good resolution, and the characters are all enjoyable in their own way. I love how news broadcasts were drawn with 2D cartoons and backdrops, and the 3D models have clear hand gestures, and facial expressions. I will now impatiently wait for new content. 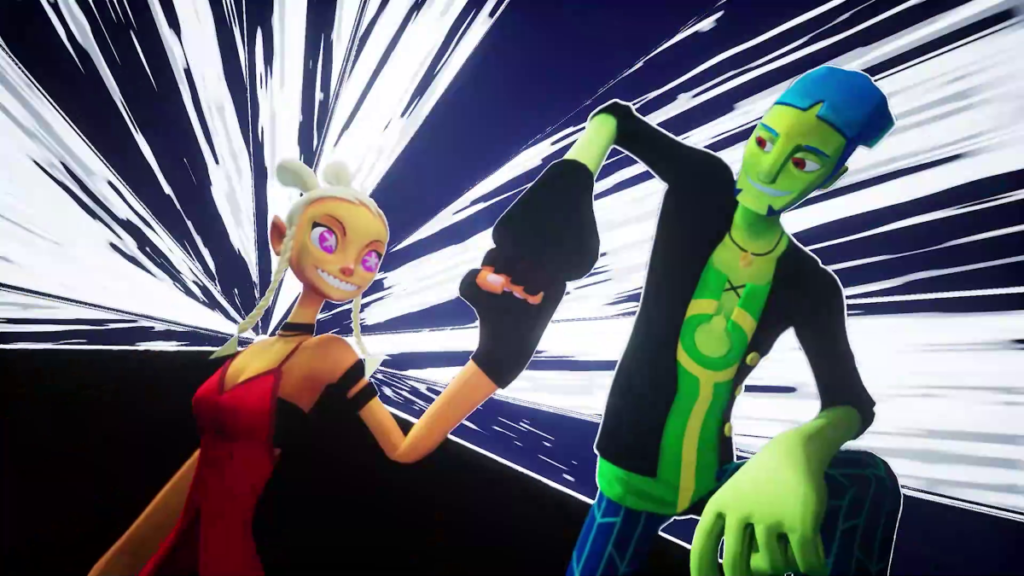 No Straight Roads respects your time, and is worthy of your collection.