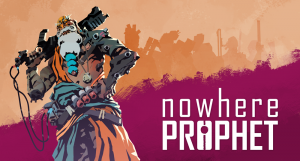 If you have already read our preview of Nowhere Prophet, you are well aware of the background behind the development of this deck-building game. To recap, the game was headed up by Martin Nerurkar, who is based out of Germany. Leading a small team of five (including himself), he set out to make a game he wanted to see: “A digital card game without the collectible arms race set in a diverse world.” Nowhere Prophet is indeed these things. 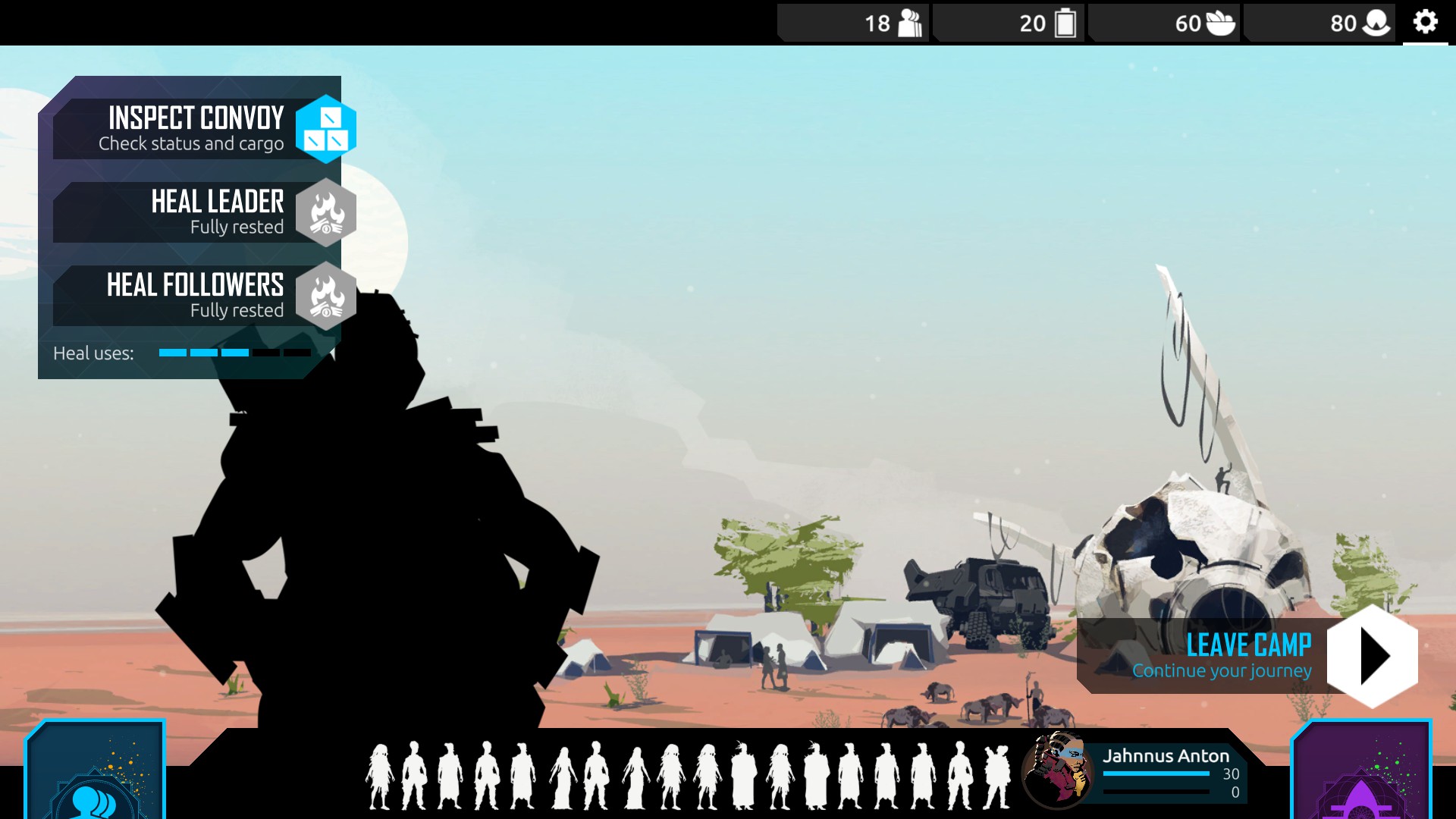 The beginning of an exodus

Violence: This game entirely consists of card play and narrative scenarios. When a card is attacked, a scratch or bullet holes will appear on the card attacked for a brief moment. No blood or gore is shown—the card simply disappears when defeated. The narratives contain grim descriptions of events, but nothing is inappropriate to read for a young adult.

Spiritual Themes: It is fascinating to see a world such as this: post-apocalyptic, governed by technology and machines, yet people find the means to survive among the incessant dangers from man and machine alike. In this universe, certain machines contain some sort of prophetic message and can speak to people. The protagonist is given a message from a dying machine. Could it mean salvation for himself and his followers? With nothing but this message in his mind, the prophet steps forward, leading his people through this wilderness, much like Moses leading the Israelites. Even the title art is reminiscent of a post-apocalyptic version of Moses. I laugh at the idea of Moses having an energy weapon, but it intrigues me, nonetheless. What would the book of Exodus look like in this world? I assume, something along the lines of Nowhere Prophet, sans God. In this world, manna does not fall from the sky and water isn’t provided from a rock. The prophet and his people must scavenge and fight to survive; a grim world indeed.

Positive Themes: Throughout the prophet’s ventures, they can decide to save, pillage, or ignore people found on the road to the Crypt. If the prophet chooses to aid people, they gain followers and altruism points (which help with other situations later), but cause the food stores to dwindle faster. Despite the seemingly infinite despair in this world, the prophet has the option to be a guiding light. But will they be a light that is easily snuffed out? Or will it endure? 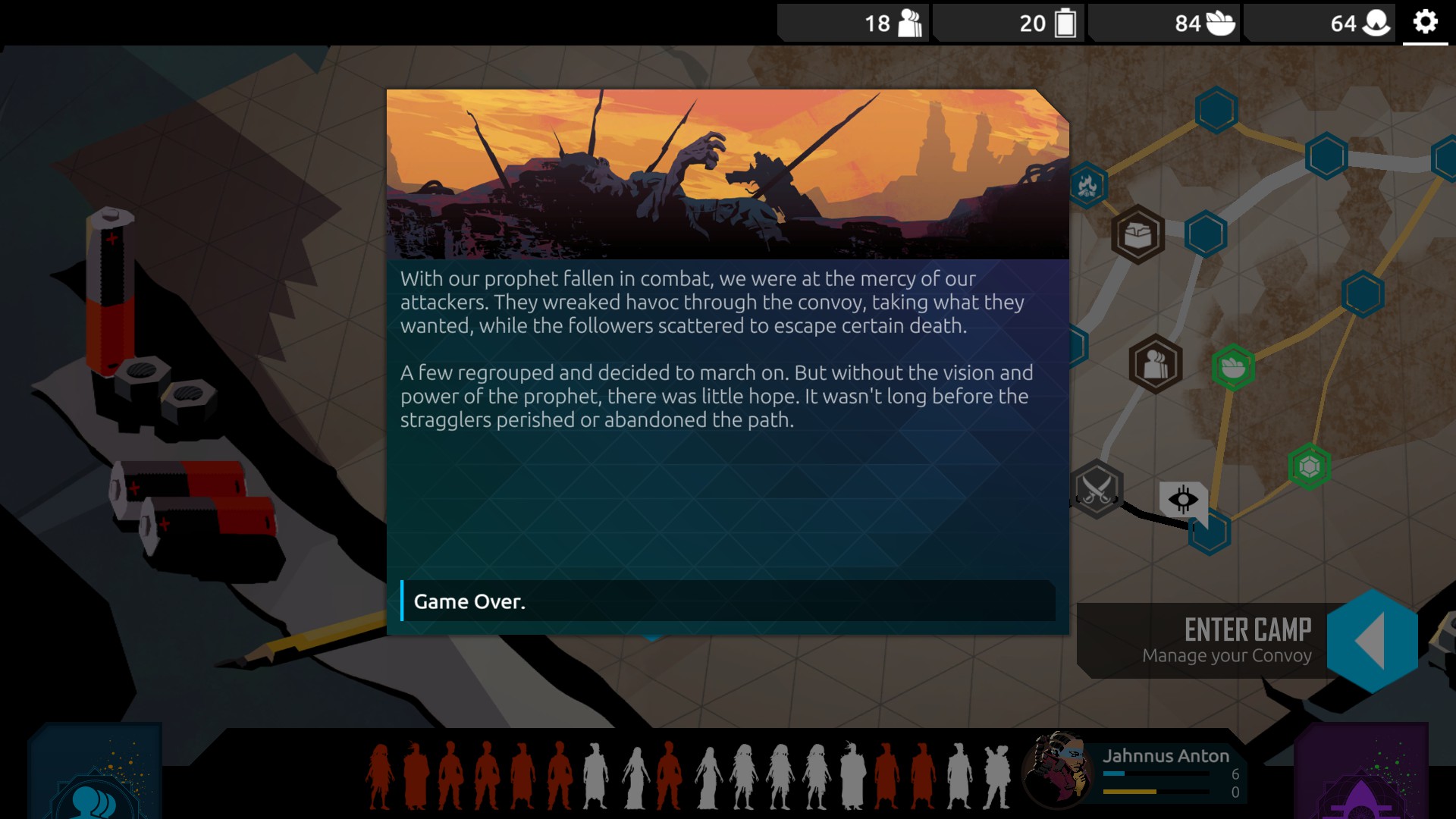 Better get used to seeing this screen a lot…

Recently, I found out that digital card games and deck-builders are my cup of tea. One of the first card games to help me realize my love for this genre was Hand of Fate 2, which is a mythical journey deck-builder roguelike, that includes combat mechanics with 3D characters. Nowhere Prophet brings a whole new world to the table with mechanics similar to a typical game of this nature. The setting is immersive and intriguing, drawing you in almost immediately with its abstract art style and grim atmospheres.

Nowhere Prophet has a combination of role-playing, card combat, and party management gameplay. As the prophet who has heard a message of salvation from a dying machine, you must lead the people who believe in you and manage them wisely. Out of devotion they will fight for you and protect the caravan from harm. 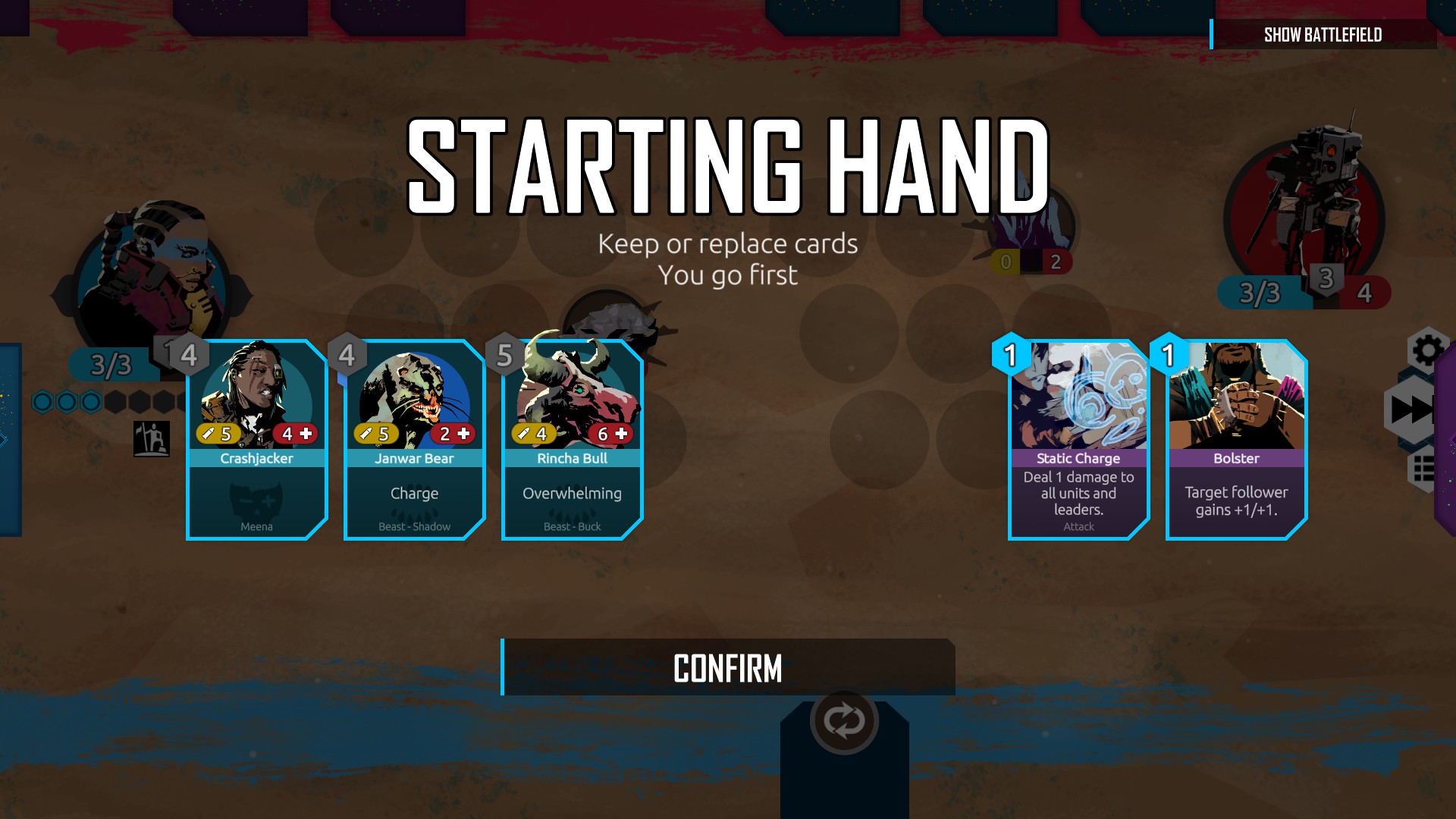 At the beginning of combat, you draw three convoy cards and two leader cards at random. You can choose to discard cards at the beginning, drawing other cards to replace ones discarded.

Each follower is a card in your deck and each one has an ability. When beginning an encounter, the prophet begins with three convoy cards and two leader cards. Convoy cards consist of your followers and leader cards are actions the prophet can do, but all cards have a cost to play. At the beginning of each turn, energy is replenished, and each leader starts with an energy of three. As the combat progresses, max energy goes up by one per each turn that is taken, allowing for more costly cards to be played.

When a convoy card enters the combat field, they enter exhausted (unless they have an ability that lets them attack immediately) and must wait until the next turn to attack. But combat is won when either leader is defeated. To win, you needn’t mind the enemy’s convoy cards, go for the head honcho!

Of course, that is simply one strategy to use. Focus too much on offense and the prophet will suffer substantial damage. Since this is a roguelike, you must remain alive until the very end of the journey, and the way is quite lengthy. One must be smart and choose battles wisely, fighting only when necessary. Yes, it is fun, but fight too much and one risks the prophet’s health. The same goes with convoy cards. Once they are defeated, they only have one more use. If they are defeated in battle again before being healed, they are lost forever. 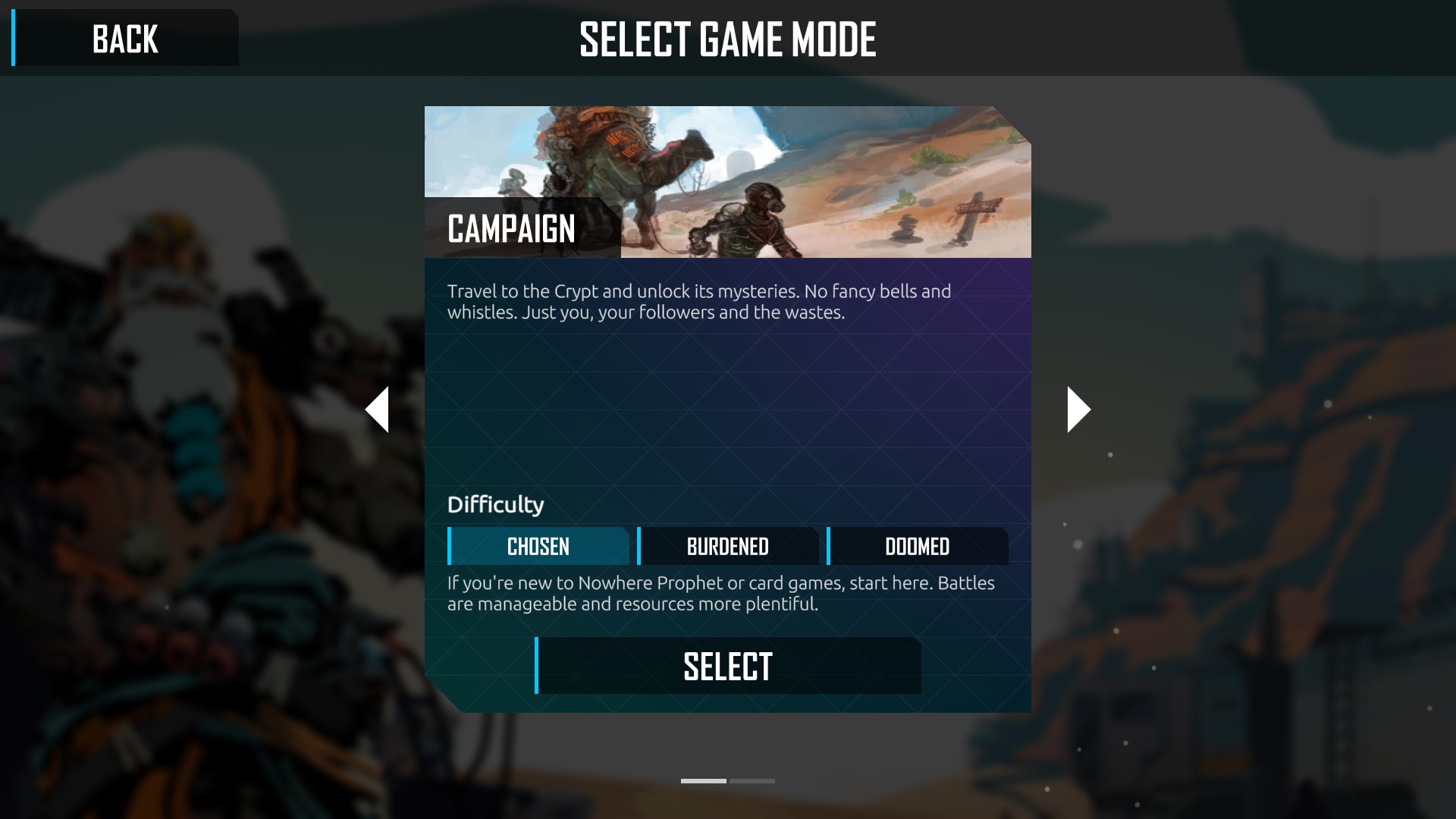 You can choose your difficulty at the beginning. I often chose “Chosen” and I often died…

On the topic of healing, there are only a few places the prophet can stop to heal their party. Once at a place of rest, there are a limited amount of “heals,” and they must be used wisely. Should the prophet heal themselves or the caravan? Decisions, decisions, decisions. Frankly, I wish there were more opportunities to heal the party/leader. Even when playing on casual mode, I often found it difficult to make it through the first region. I either need to “git gud” or the game’s difficulty is too tough on the easiest setting.

Map travel consists of markers on a map and a few clicks to set out to the next destination. Traveling consumes food and hope, two of the main things that the player must keep a sharp eye on. If the people lose hope, they will leave the caravan. If food stocks are all gone, the convoy will resort to cannibalism…either way, the player will lose people. A good way to keep up food is by trading at camps and establishments. The in-game currency is batteries. Gain batteries by selling goods or finding them along the way in the wilderness. 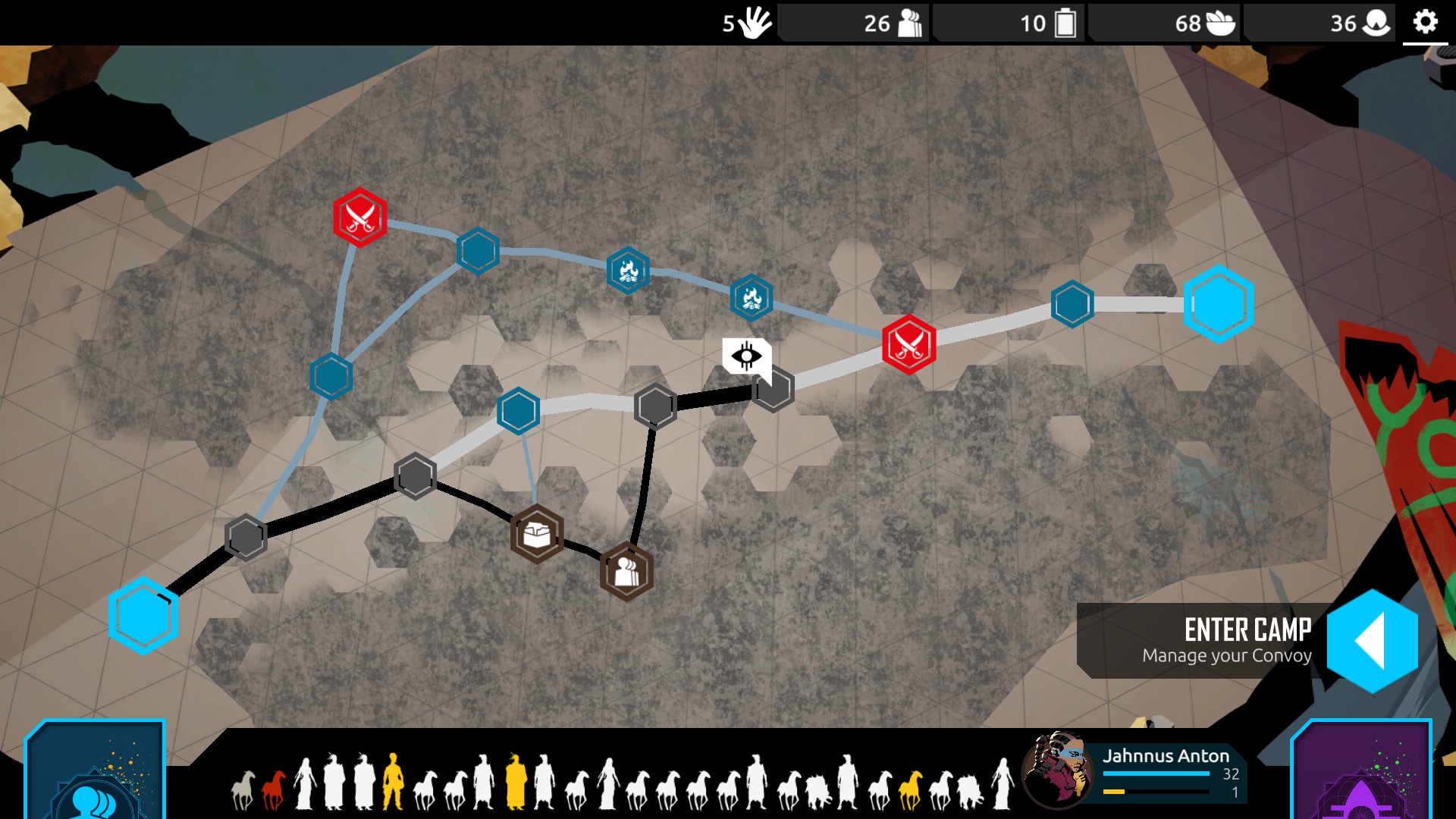 A look at map gameplay and traveling

Hope is kept aflame by sharing artifacts and costly items with the convoy. But these items can also be sold for a pretty penny, so it boils down to another tough decision. I typically would choose the altruistic path and I always made sure my followers had food and hope, often times having little to no batteries in hand. I was a poor prophet, but my people were cared for. Isn’t that what matters?

As for RPG elements, the leader can be leveled up, upon which their health is maxed out and can be allowed to add one leader card to the leader deck. These cards are handy, some allowing the leader to kill any enemy on the board, or several enemies at once. This brings up the topic of deck management. Sometimes when your followers have been defeated once, to spare them from disappearing altogether (especially if they’re exceedingly helpful), it is wise to remove them from your combat deck until they can be healed. Knowing what is in your deck is helpful when entering unknown combats.

The player can also unlock various convoy decks and prophet cards to play with. During my gameplay, I managed to unlock the nomad deck, giving me access to cards I’ve never seen before. I am looking forward to unlocking even more decks to play with.

The roguelike and randomization mechanics can be too much at times, since all battles and encounters will be different in every playthrough. Sometimes, the prophet will encounter many fights in the region or only a few. It all depends on the randomization. This proves to be both challenging and troublesome, since it forces the prophet to always be ready for the worst, but can be so devastated in a single battle, dooming them in the encounter that happens on the way to the camp to heal. This happened to me more than once. One thing that would be helpful here is a “run” feature, that can have limited uses, but very useful in a pinch.

The art style in Nowhere Prophet is imaginative and fresh, reminding me of a simplistic style, blending color pallets together, but not exactly having any distinct lines and shapes. OST is a great mix of ethnic vibes and cyberpunk, creating the perfect post-apocalyptic combat music. Check out the composer Mike Beaton and the official soundtrack on his bandcamp account. 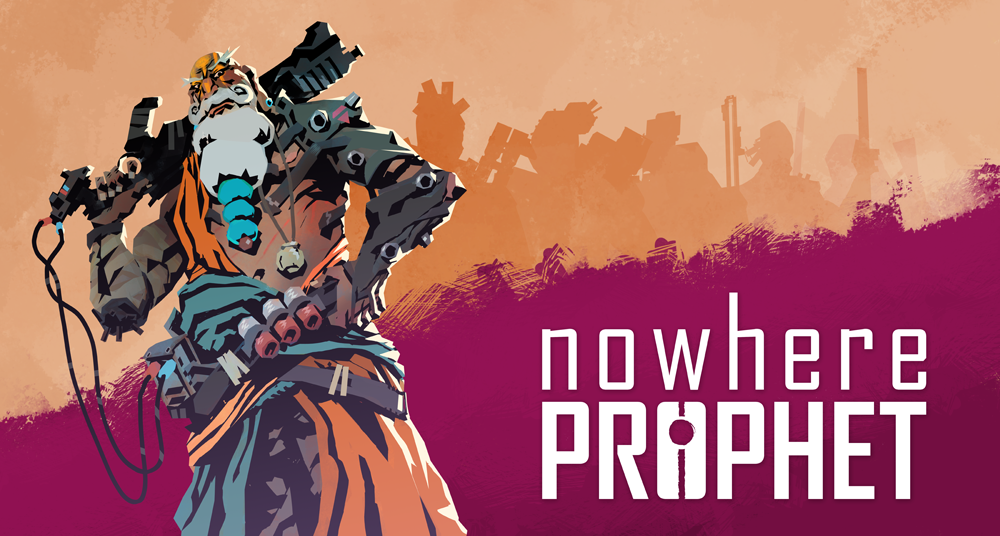 Imagine if Moses was a post-apocalyptic prophet…

Nowhere Prophet is a phenomenal digital card game, containing many factors to balance, such as deck management, lack of resources, and choosing to avoid encounters. While the difficulty is high, it manages to maintain my attention with its immersive world and fun combat system. Randomization can sometimes thwart a player’s game out of nowhere, but it is all the more reason to find a way to adapt to the ever-changing environment. At $25, Nowhere Prophet is well-worth it, as it will provide endless hours of play time, especially with the different unlockable decks and prophets.

Nowhere Prophet is well worth it, as it provides high replayability and does not disappoint in card gameplay.