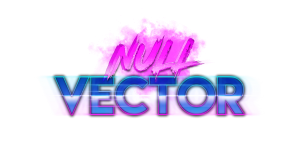 I would like to fully disclose the nature in which I came upon Null Vector. It so happens that I had been active on the discord channel for SYNTHETIK, and the PR representative for Fire Flow Games noticed that I had reviewed the game. They contacted me, asking if I would be interested in covering future releases. I agreed to the affirmative, only later wondering if I had agreed to spend time with what might turn out to be shovelware. I am pleased to confirm that Null Vector is certainly not that. 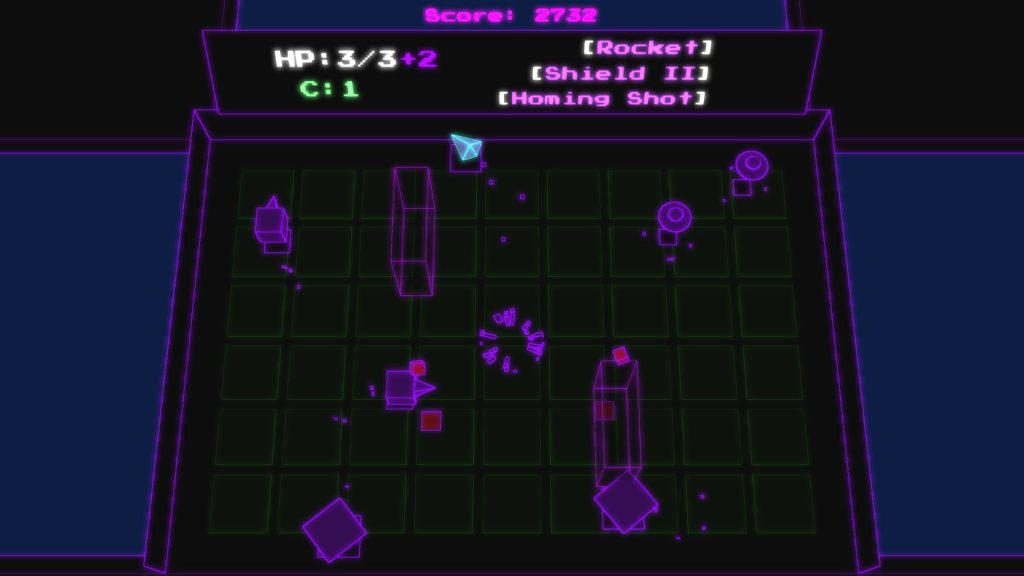 Standard mode is chillax, but hard mode is not for the faint of heart.

Only those who find video games fundamentally abhorrent would find Null Vector offensive.

Null Vector is throwback to the days of quarter-munching cabinets found in arcades and pizza parlors in the 1980’s. I am talking about the type that doubled as tables to hold a plate of food. Though it features a few bosses, Null Vector is a game designed for speed runners and high score hawks. Guide a pyramid-shaped ship through a series of miniature mazes hosting geometrically-shaped foes that scale with difficulty while collecting upgrades to ameliorate the mission. 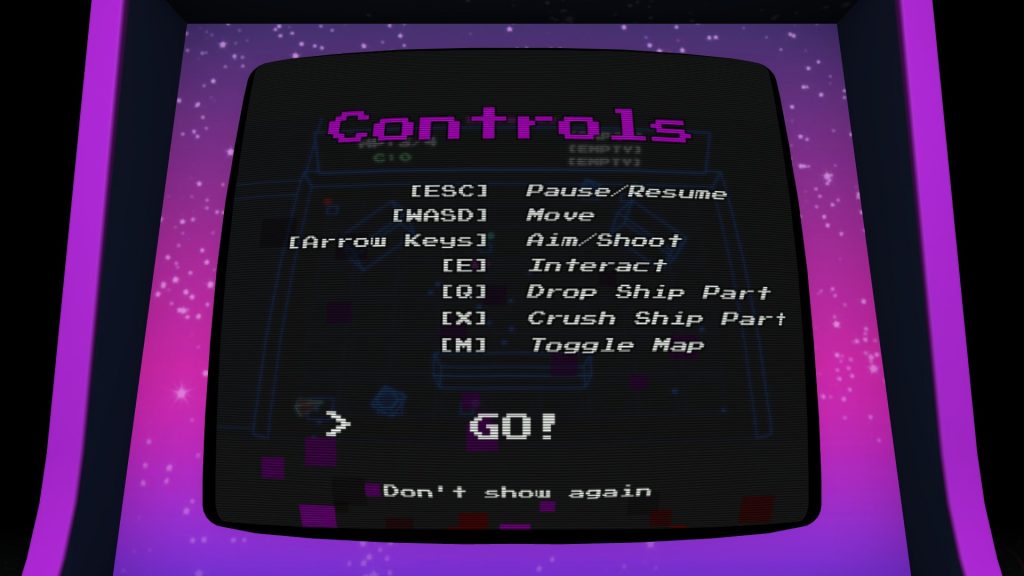 Controls so easy, a caveman can do them.

Null Vector starts players in a central room. Like a less-detailed (or violent) Smash TV or Binding of Isaac, players are allowed to choose where to go. Generally speaking, there are about six rooms per floor, and there are six floors plus a seventh which features a final boss. Before enteirng a room, it will be either numbered or lettered. Numbers 1-3 indicate the number of waves of enemies that must be dispatched before further progression is possible. A “T” indicates an upgrade room; “C” is for challenges; “B” is for mini-bosses. 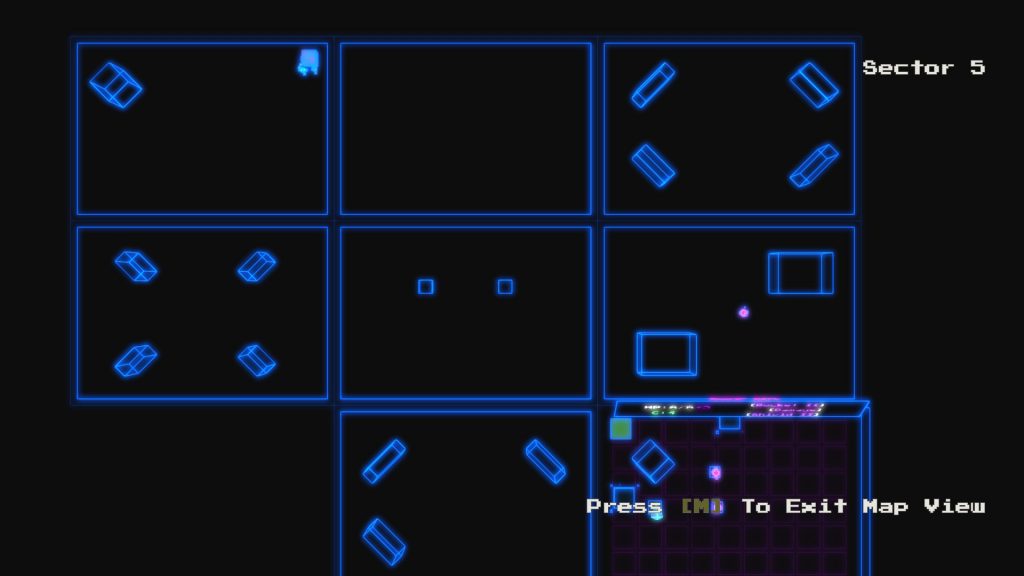 A fully explored floor. The middle room was the upgrade room. Bottom right with the green square is the exit to sector 6. Top left has an upgrade module in its northeast corner.

Challenge rooms come in three flavors: defeat all enemies (I have seen up to twenty-four), or collect 5 spawning items, or a “stay on the point” zone room. Winning a challenge room can spawn health, random upgrades, or crystals, which are used to purchase items or upgrades at specific modules. Conquering a boss offers similar rewards that are possibly higher level than the typical affair. 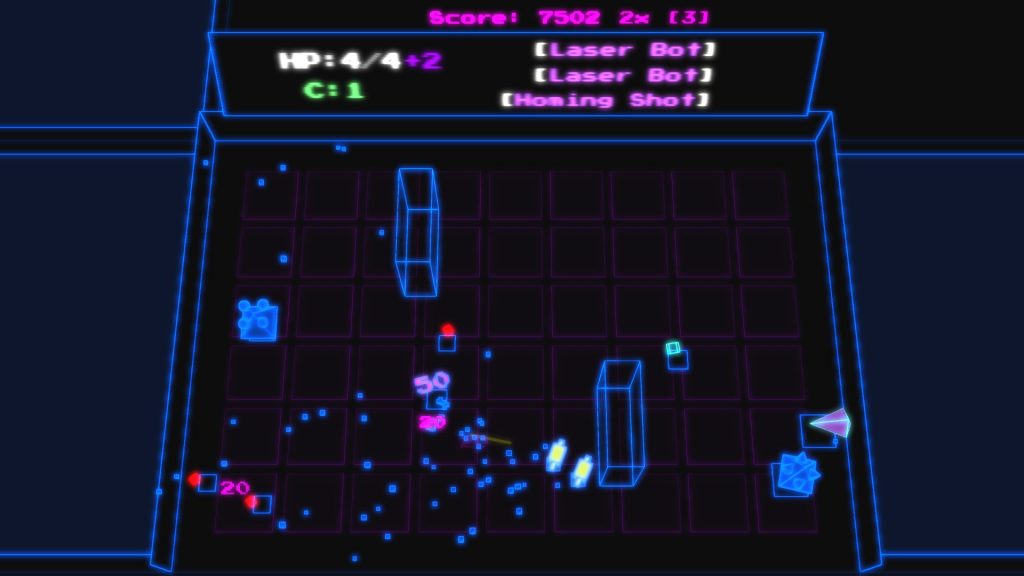 Do not adjust your monitors; that scoreboard is intentionally rendered blurry to simulate curved CRT displays of the past. Here, my two laser bots are taking out enemies on the other side of the wall. Also, I risk getting hit by the aggressive blue enemy while taking this screenshot.

The standard shot is underwhelming. Luckily, upgrades are satisfying. Because Null Vector fashions itself a retro style rogue-lite for the 21st century, I gravitate toward picking up shields, which gives me additional health that, unlike standard health, recharges at the conclusion of every room. I also enjoy rockets, which I believe do extra damage without the “damage” upgrade, and the explosions do splash damage through obstacles. After that, I like to find a laser or missile bot if I can. One can typically only carry three upgrades at a time, either dropped after finishing a room, finding them in the “T” rooms, or via module. Some of these modules allow players to weld upgrades to the ship, attaching them permanently, and liberating an upgrade slot for future additions. I save these for luxury-class items such as homing attacks or rapid shot. There are also nanomachines and helper bots, but I have no idea what they actually do.

I consider myself a SHMUP veteran (bullet hells do not count). Null Vector takes no longer than about twenty-five minutes to clear the entire game on the standard difficulty with the default settings, even while visiting every room. Every enemy has a pattern, and it is up to players to determine which like to charge and ram, teleport, or shoot mortars. I would consider this too easy, but there is a harder difficulty, indicated by a purple environment. There, enemies are more aggressive and shoot more as well as leave a trail of shots even after they die. I consider hard mode to be Null Vector‘s true difficulty. Those looking for a nuanced, customized challengecan activate a series of modifiers in the main menu. 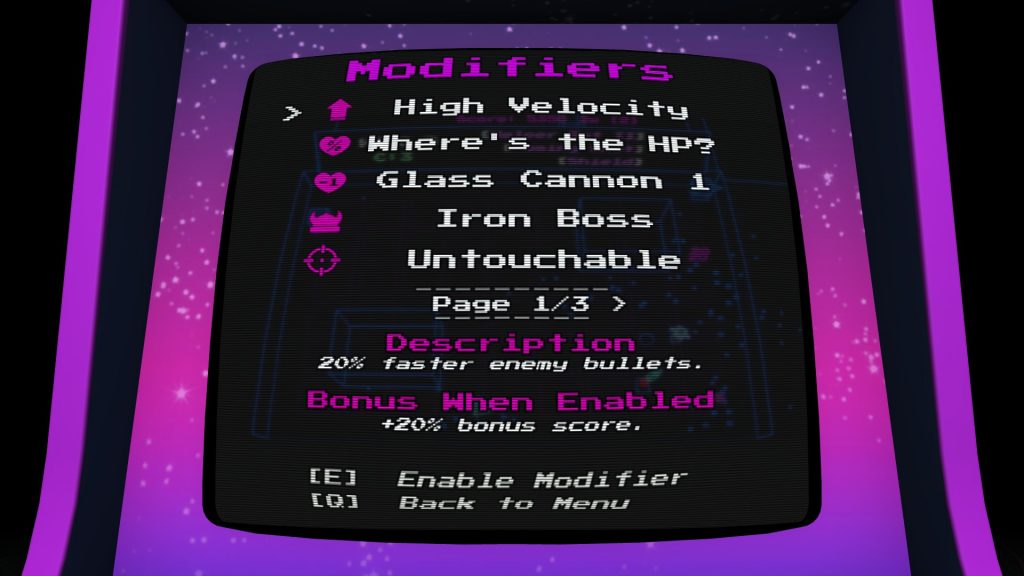 I’m not fond of tinkering, but you might be.

Null Vector was developed by a one-man team of Alex Miele, and it is indeed a humble, but fun game. Its simplicity is certainly a change of pace from the $60 AAA games like Far Cry 5 and God of War (2018). That said, at the cost of less than a Whopper value meal, one should not expect a Ruth’s Chris steak. Accordingly, approach Null Vector similar expectations in scale.