Even death can be overcome

Odin Sphere: Leifthrasir is a remaster of Odin Sphere, which was originally published on the PlayStation 2 in 2007. It is a 2D side-scrolling action JRPG saturated with themes and aesthetics from Norse mythology. We’re off to a good start, so let’s examine whether the game lives up to its potential. 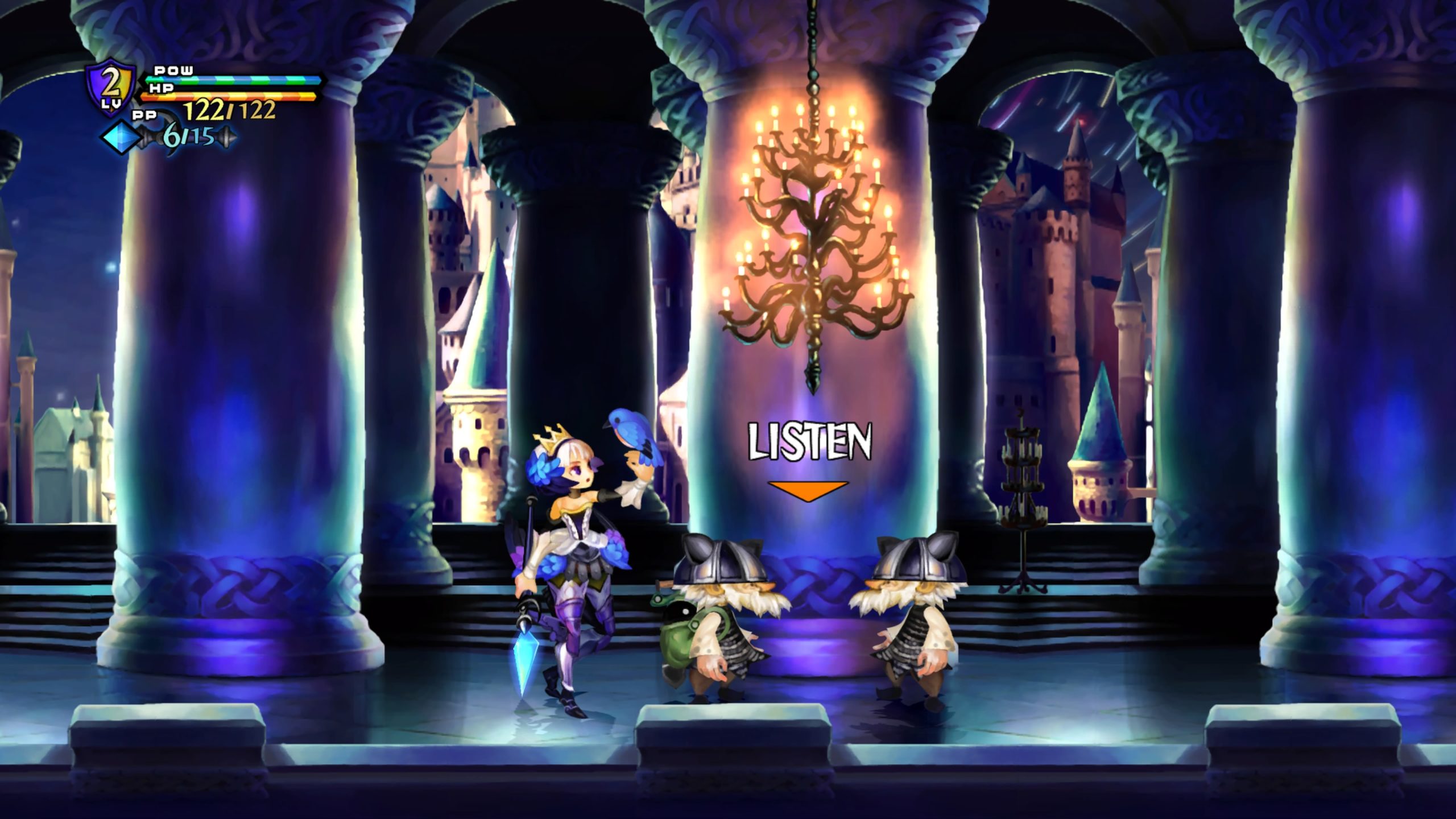 Violence: One of the primary elements of gameplay is combat. The player uses various medieval weapons, such as swords, lances, and magic. However, there is no blood to be seen anywhere.

Spiritual Content: Magic and curses play a major role in the story, as does the netherworld. Several characters are undead. Phozons are called the “essence of life,” and are released when someone dies, similar to the Lifestream in Final Fantasy VII.

Sexual Content: Many female characters wear revealing clothing. The character Lord Brigan wears next to nothing, just a belt with a loincloth and a cape. 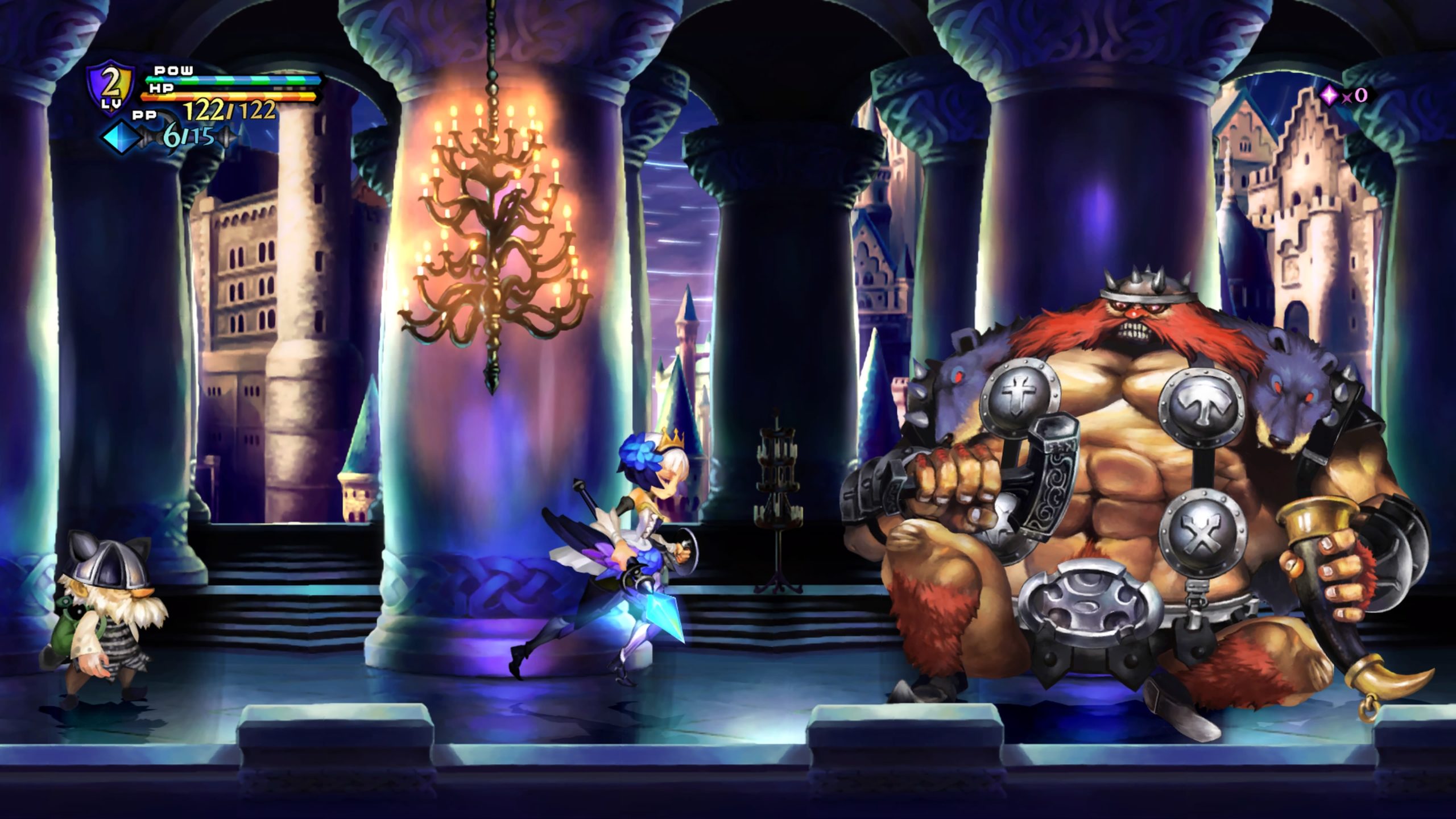 Brigan is just a Thor parallel

Language: I counted two uses of b*****d, and one of d***. Other than that, the game is remarkably clean.

Negative themes: A character treats his children as objects. The desire for revenge consumes a few characters. Several characters in positions of power abuse those they deem beneath them. One character exhibits signs of Stockholm Syndrome.

Positive Themes: A character resists selfish temptations and does the right thing. Another character makes it a point to not take advantage of others like those in power do. Love is a driving force for most of the playable characters, with many displaying an admirable willingness to lay down their life for others. 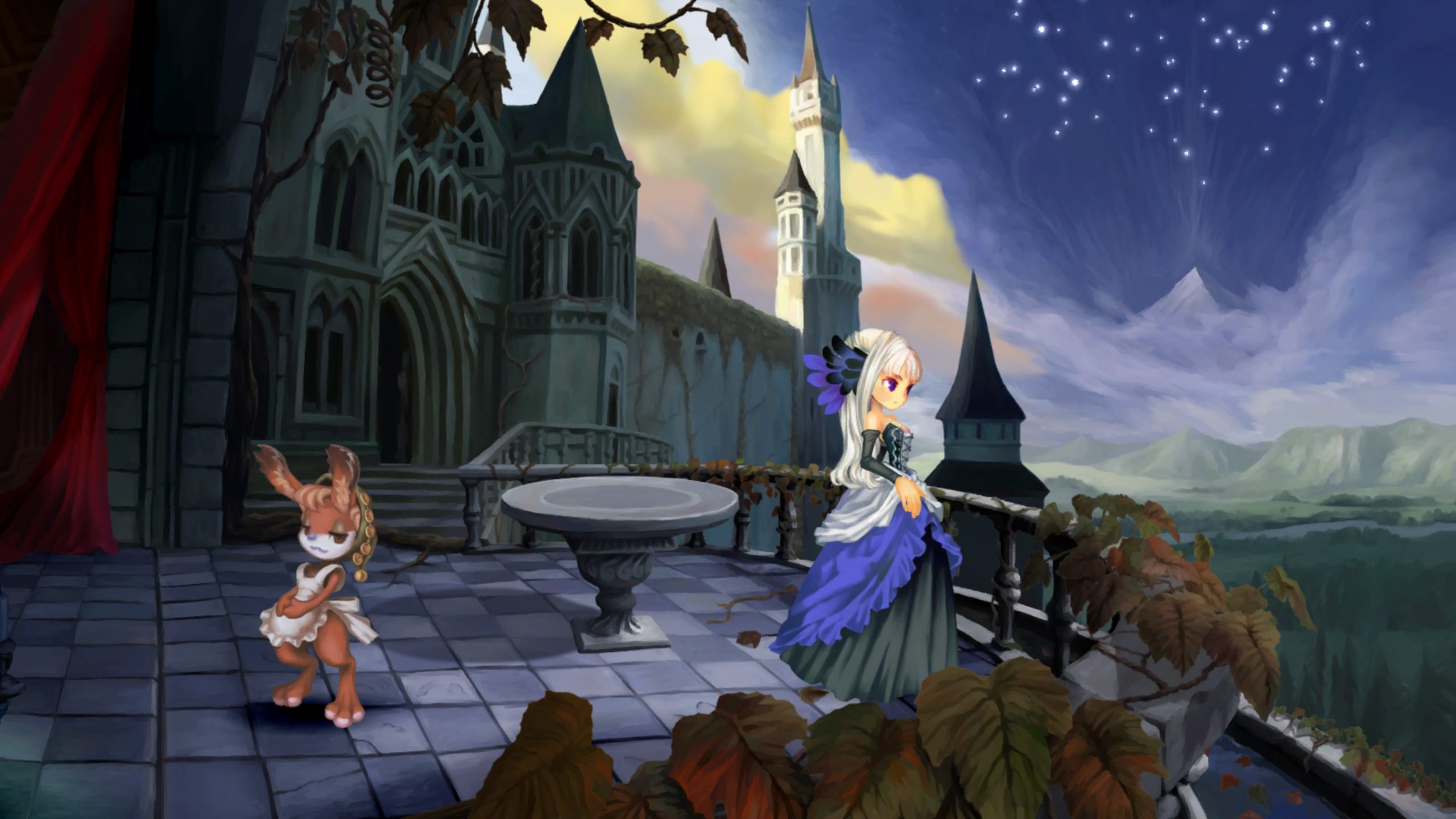 In Odin Sphere: Leifthrasir, you play through the stories of five characters, whose paths all intertwine. There are a few overlaps, and each one has gaps that are filled by another. At the start, you play as a little girl in an attic/study. All you do is pick up a storybook that tells one of the characters’ stories. You can also pick up the cat in the room, which is always a big plus for me. 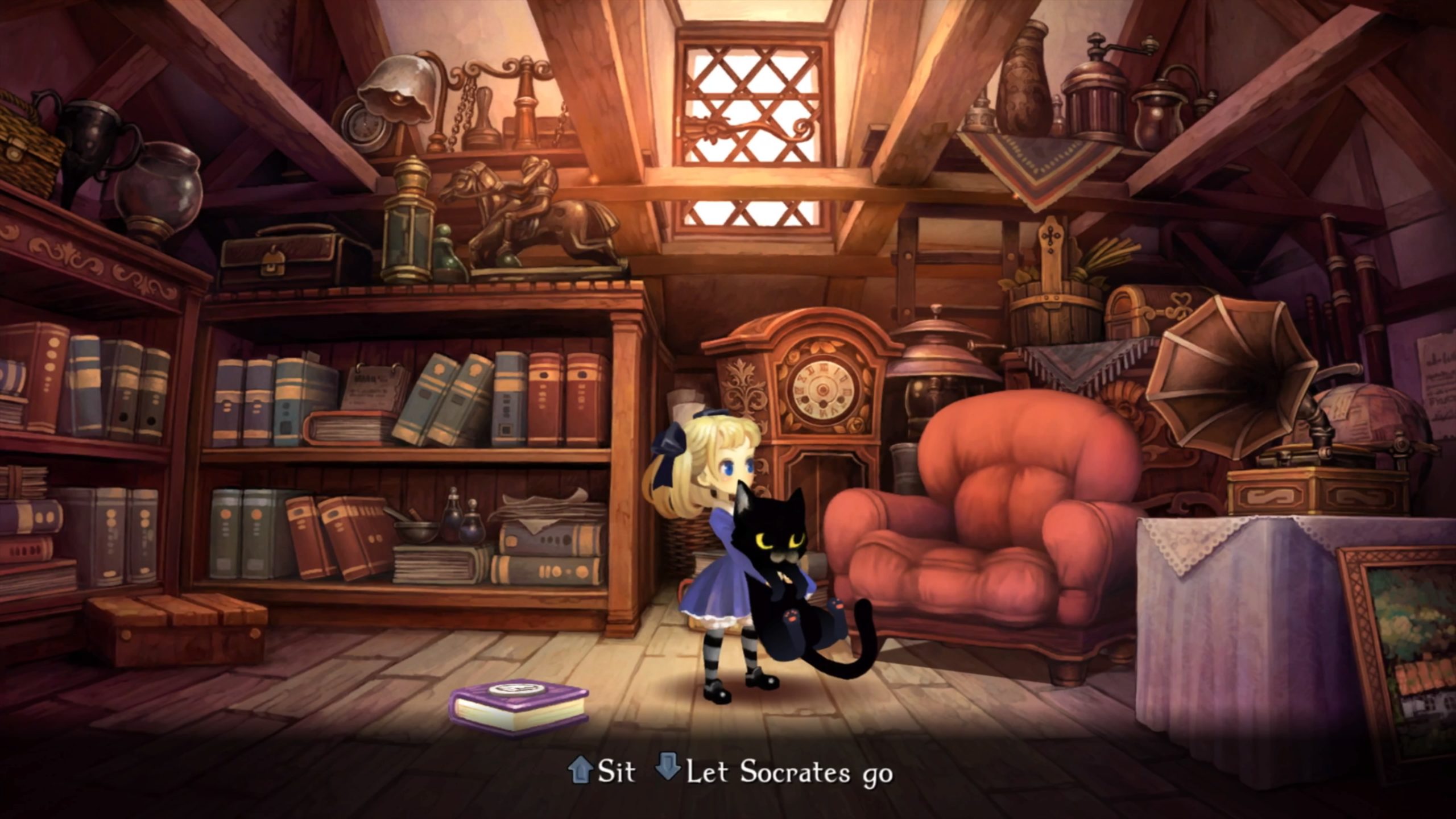 The first storybook you can read is The Valkyrie. In this story, you play as Gwendolyn, a Valkyrie and daughter of the Demon King Odin. There is plenty of family drama to keep things interesting, as Gwendolyn transitions between several different roles; at one point she is a mighty warrior trying to please her father, and in another, she becomes an exile trying to rescue her husband.

Each story covers roughly the same length of time, so you’ll retread some ground, albeit from a different character’s perspective. I have to say it was a little confusing at times to remember where a scene took place in the timeline. I think the story may have worked better if it was in a different medium, with everything fleshed out a little more. It would make for a great anime.

One thing that surprised me is that most of the first story you play, Gwendolyn’s, takes place late in the main story’s chronology. A lot happens between parts one and two of her story, but you don’t see just how much until you’ve played through other stories. It’s an interesting narrative decision. 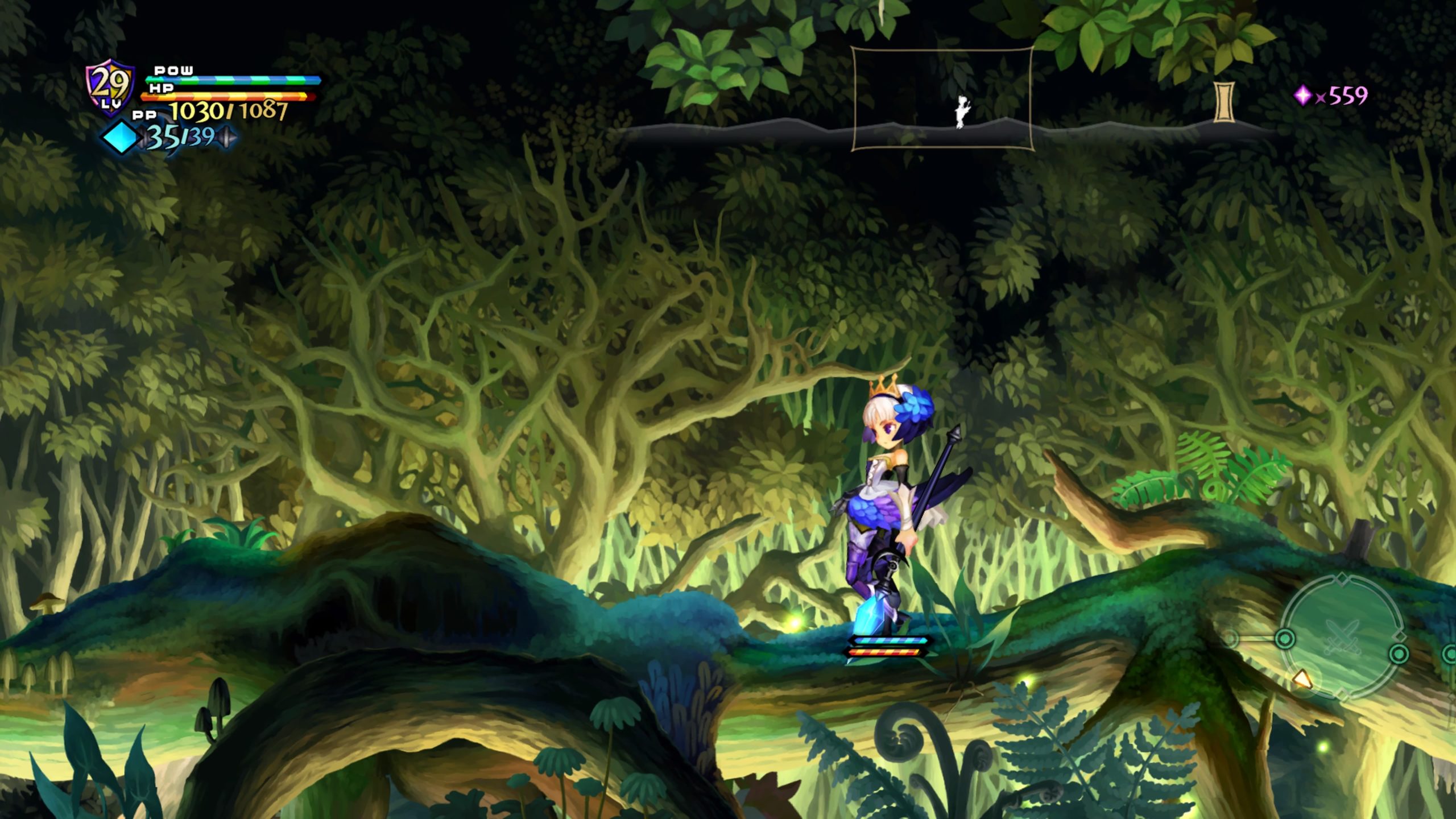 Unfortunately, there are a few things that I find to be flaws. For example, some of the scriptwriting is overly dramatic and cliche. The voice acting can also be rather hit-or-miss at points. Some characters, such as Oswald, King Onyx, and King Valentine, are fantastically acted. Most others, however, are mediocre at best. 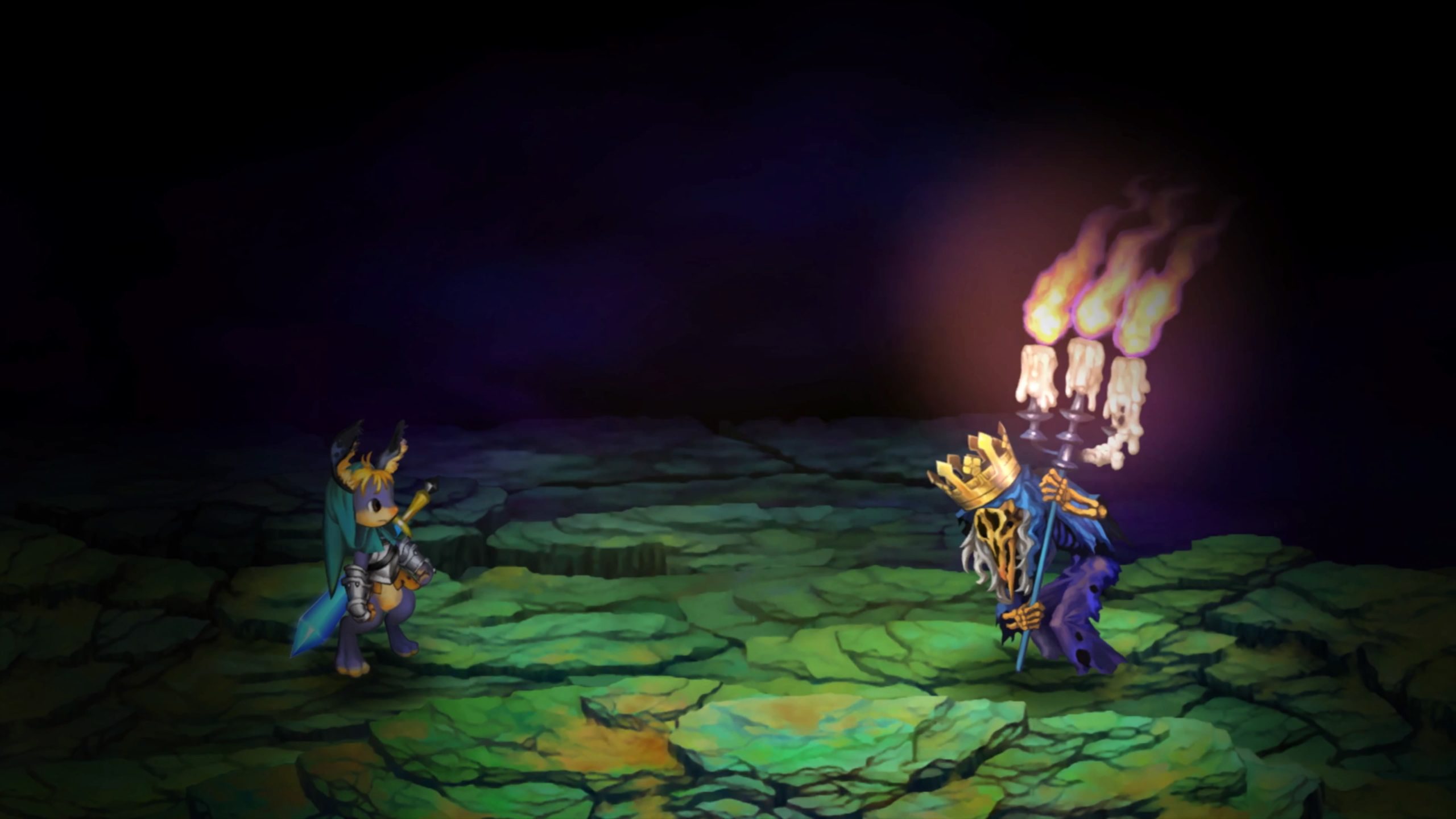 Not looking so good, buddy

Phozons are the game’s lifeblood. You can collect them by killing enemies or drinking certain potions. You need to spend Phozons to upgrade your abilities, as well as to grow plants that produce food. Eating said food is the easiest way to regain health—it’s usually more effective than healing potions—and, best of all, they give you experience points. The amount of EXP you get from eating is usually related to the amount of health you regain. The higher level the food is, the more it will heal you, and the more EXP it gives you. It’s an easy way to level up quickly. 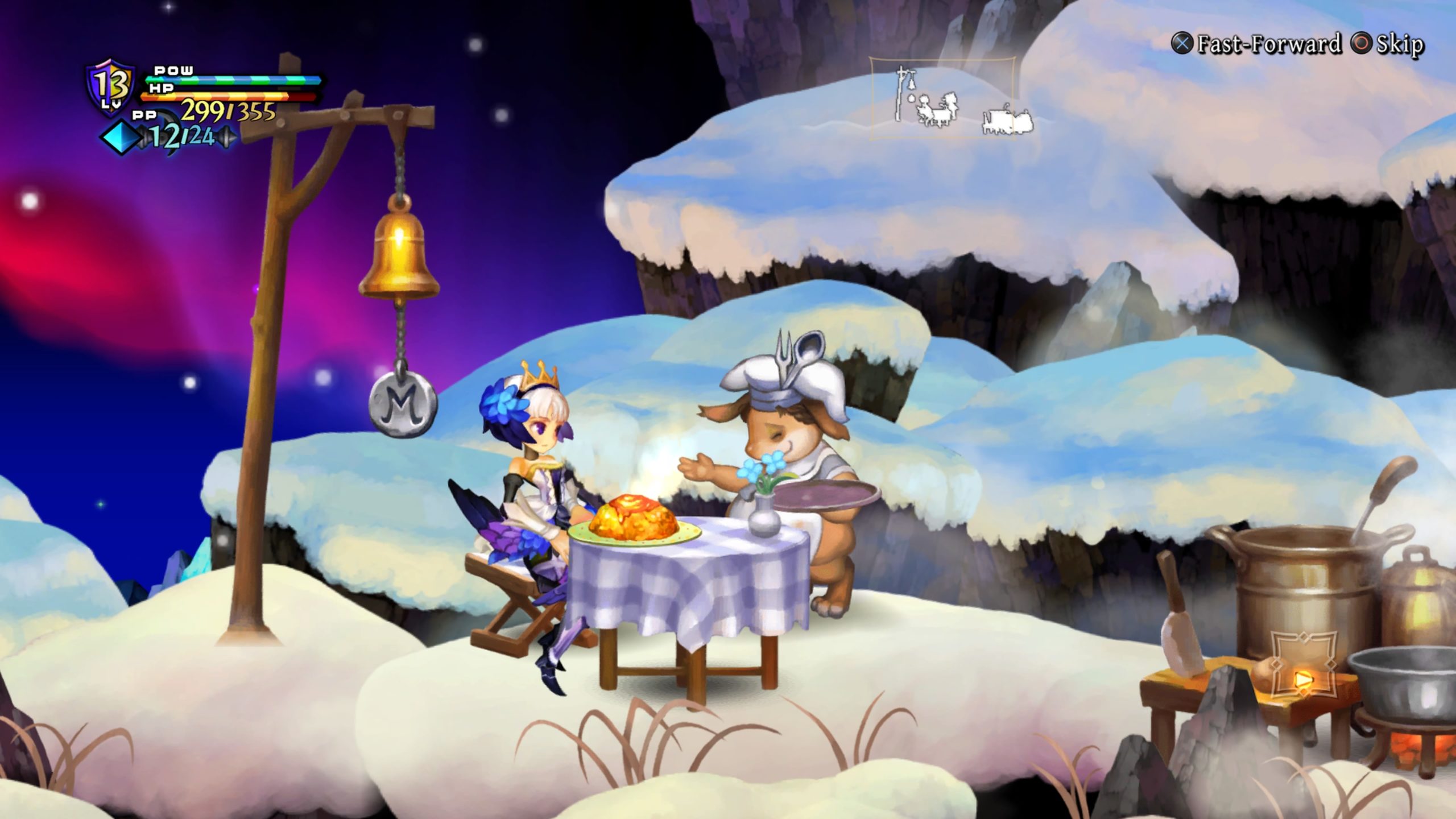 In rest areas, you can summon a traveling chef. If you have the money and ingredients, you can have him cook something for you. Some items are eaten right then, with all the health and EXP benefits, while other items are to-go. 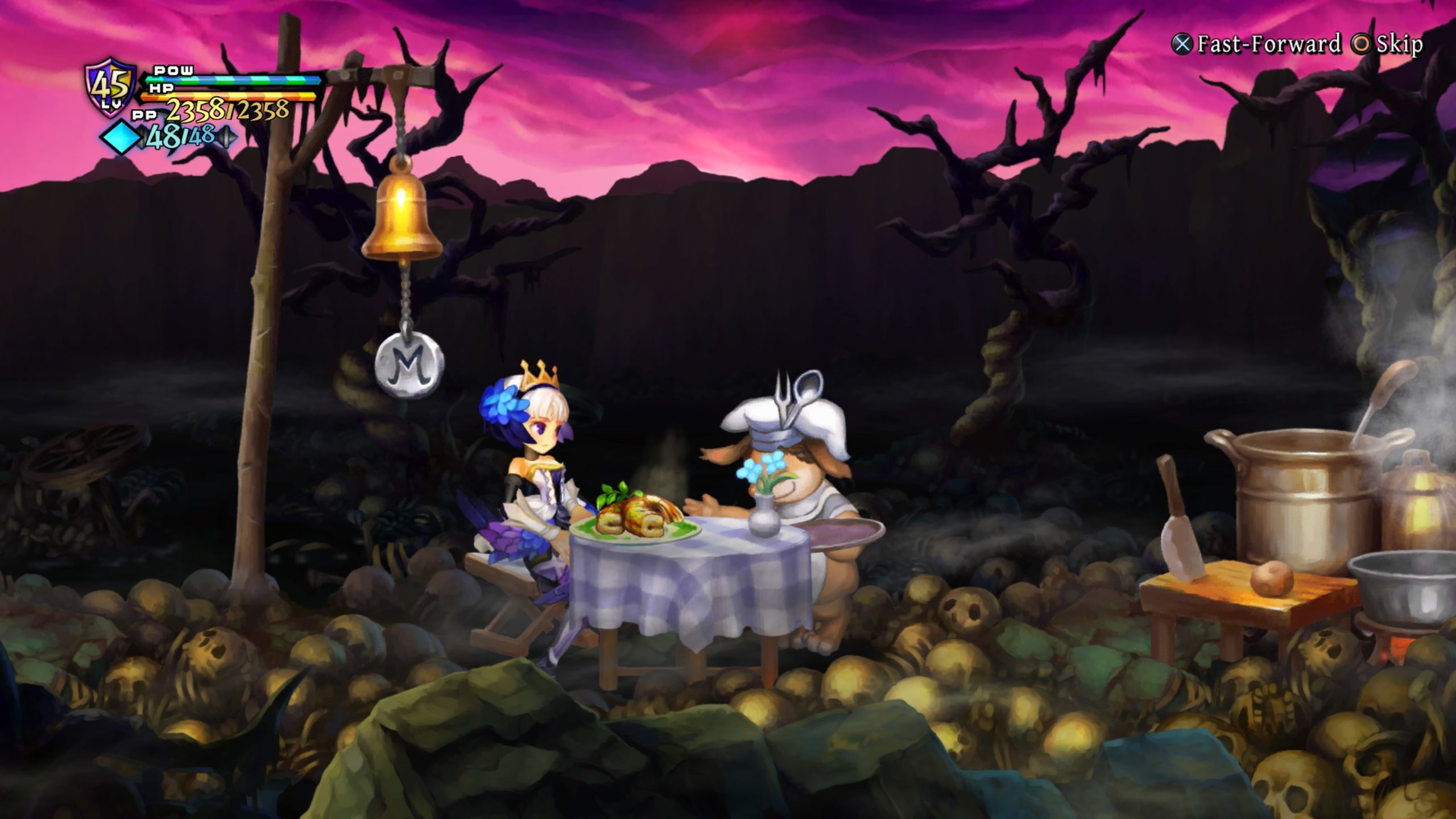 Throughout each chapter, you’ll come across various ingredients that you can use in alchemy. What you craft depends on the ingredients you use. In order to do anything, you need vials of “material,” and then at least one mandragora, which is a plant-like creature that you have to whack with your weapon to collect.

Depending on which mandragora was collected, you can make potions that can heal you, give you certain buffs like fire resistance or invincibility, or give you Phozons. You can also make toxins to poison enemies, fire potions to create flaming pillars, and wind or ice attacks. In battles, especially against stronger enemies, you’ll find yourself making use of potions often. 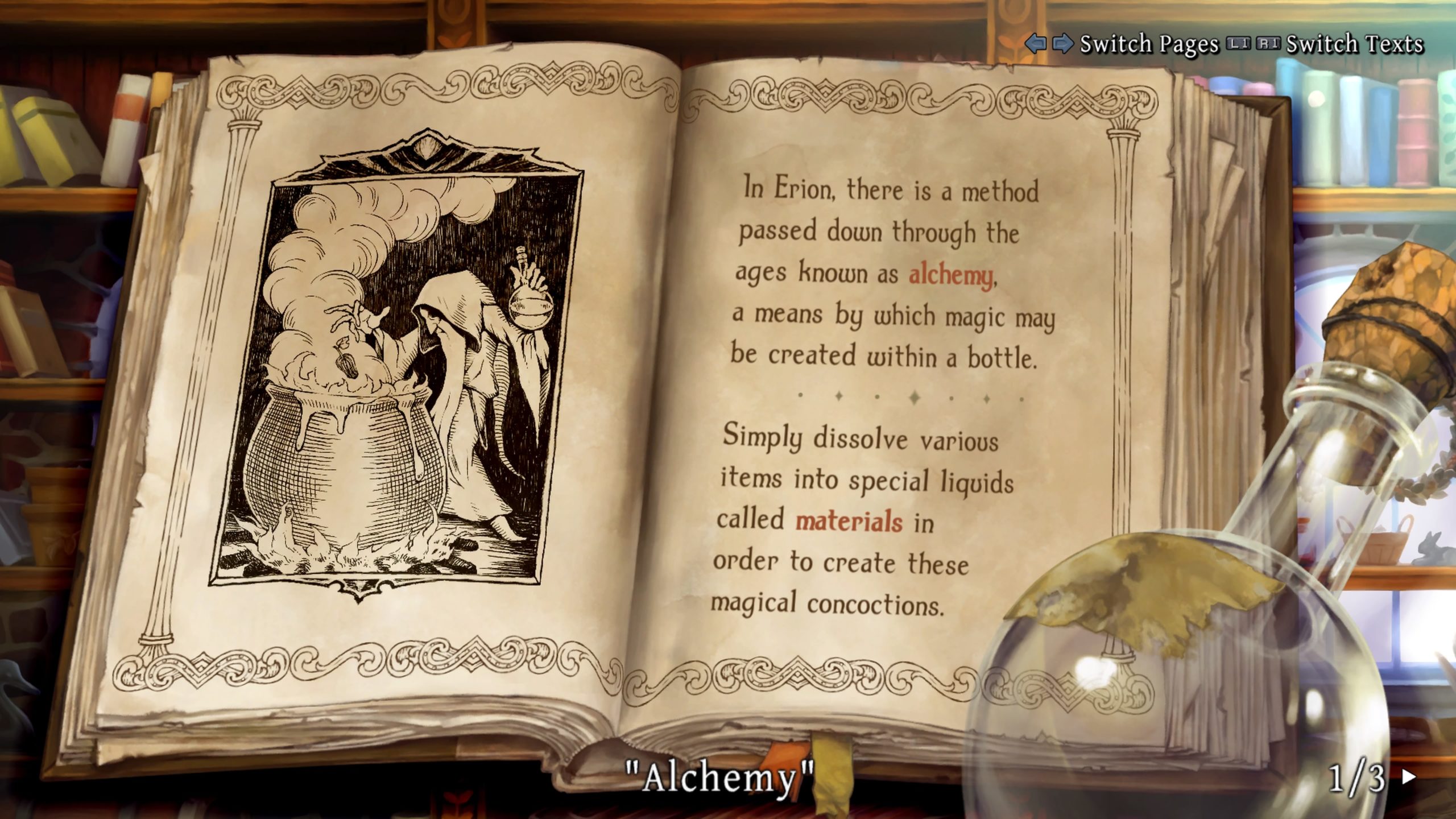 Don’t forget about the Law of Equivalent Exchange

Each chapter has its own map for you to navigate. Almost every chapter has a bigger map than the last, with more treasure chests to find, and rest areas to recover health. A merchant also hangs out at one end of every rest area, and you can buy seeds  for food as well as other items. 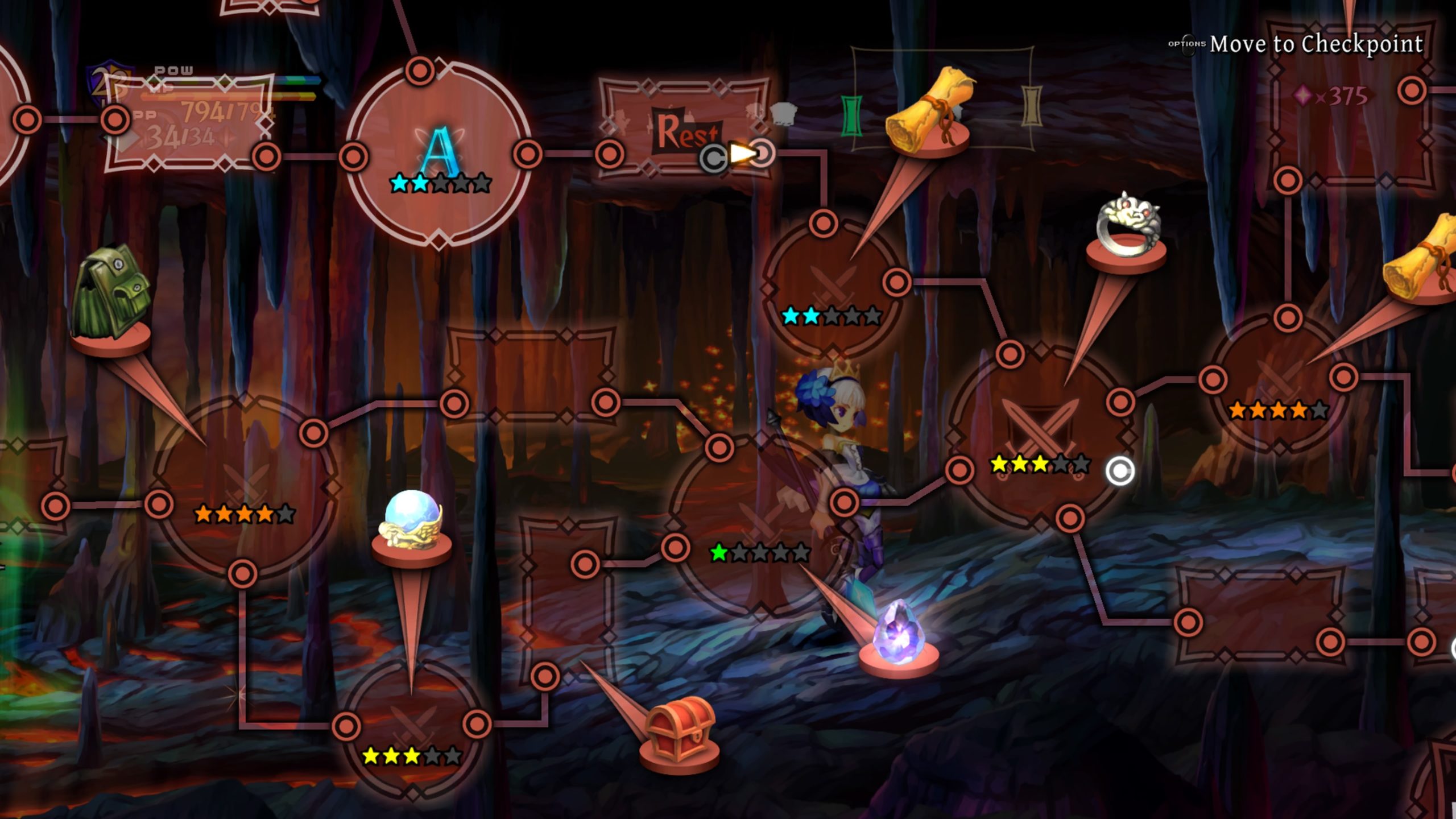 To be frank, the combat system is not the best. Primarily, you use a combination of hack-and-slash techniques and magic. There are also special abilities, which use up what is called the POW gauge. You learn more abilities as you progress, and as long as the POW bar still has some juice in it, you can keep using them.

After each battle, you receive a rating based on mostly, from what I could tell, how long the encounter took. The better the rating, the better the rewards. You get ingredients for alchemy, scrolls that usually contain new recipes, and money. 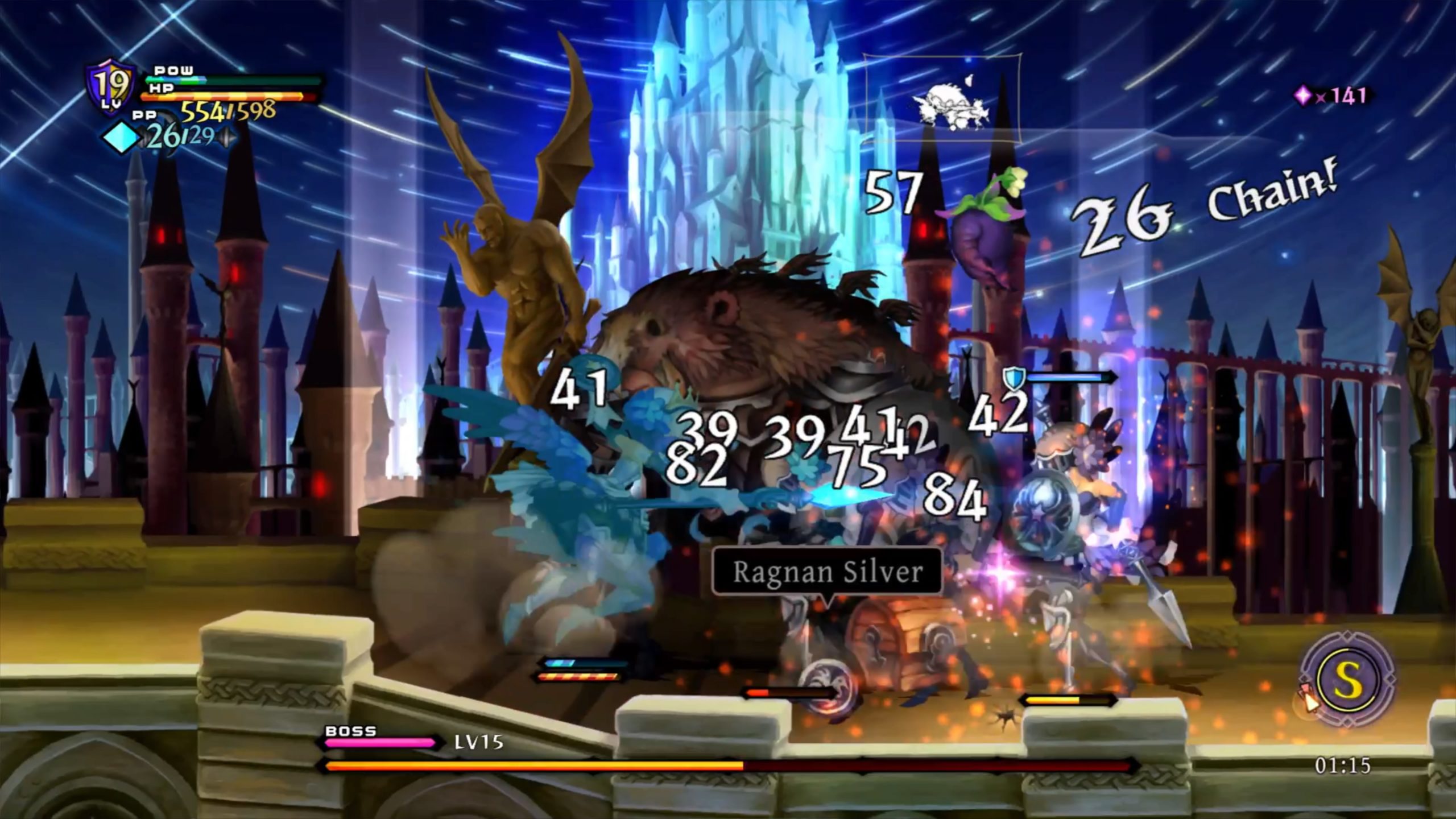 At the beginning, the combat is novel and fun. There’s a lot of dodging involved, as well as combos where you knock an enemy into the air and juggle them.  But after a while, it starts to get stale. Having to fight through almost every area of each chapter’s ever-growing map causes it to get tedious even faster. 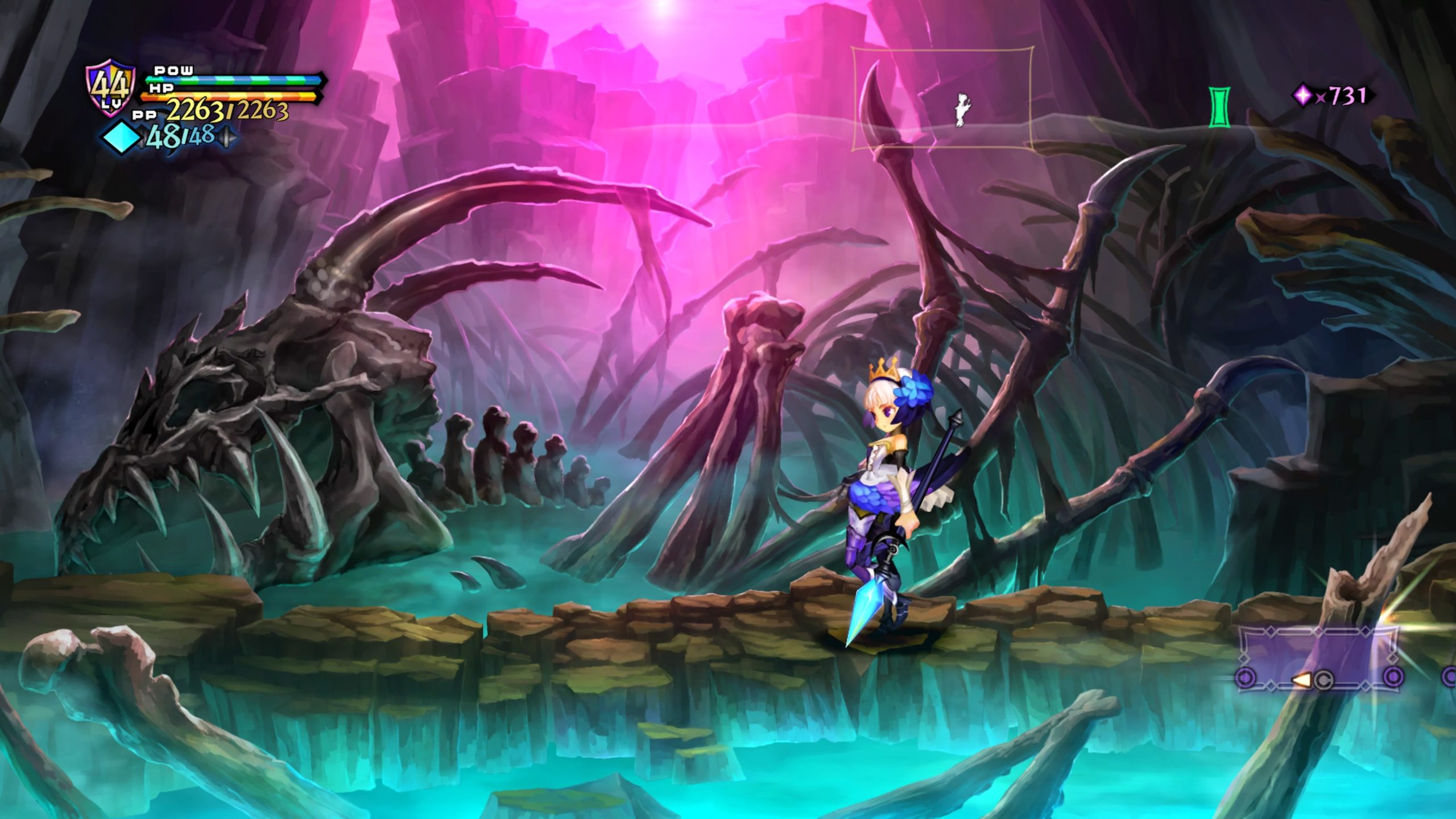 I mentioned in my introduction that the game is saturated with elements of Norse mythology. Unfortunately, that’s only a quarter true. Though you’ve got Odin, Nidhogg, Valkyries, Aesir, and Vanir, none of that is anything more than the names and words from the stories. They have virtually nothing to do with the actual tales. Odin in the mythology did not have a Valkyrie daughter; the Aesir were the gods, not regular people who happened to come from a specific country, and Nidhogg—the serpent that gnaws at the roots of the world tree Yggdrasil—was not an elf.

That said, they were spot on with Odin’s personality. In addition to trying to manipulate the end of the world, he has the attitude of, “I love you only if you’re useful to me.” He is rightfully called “Demon King.” 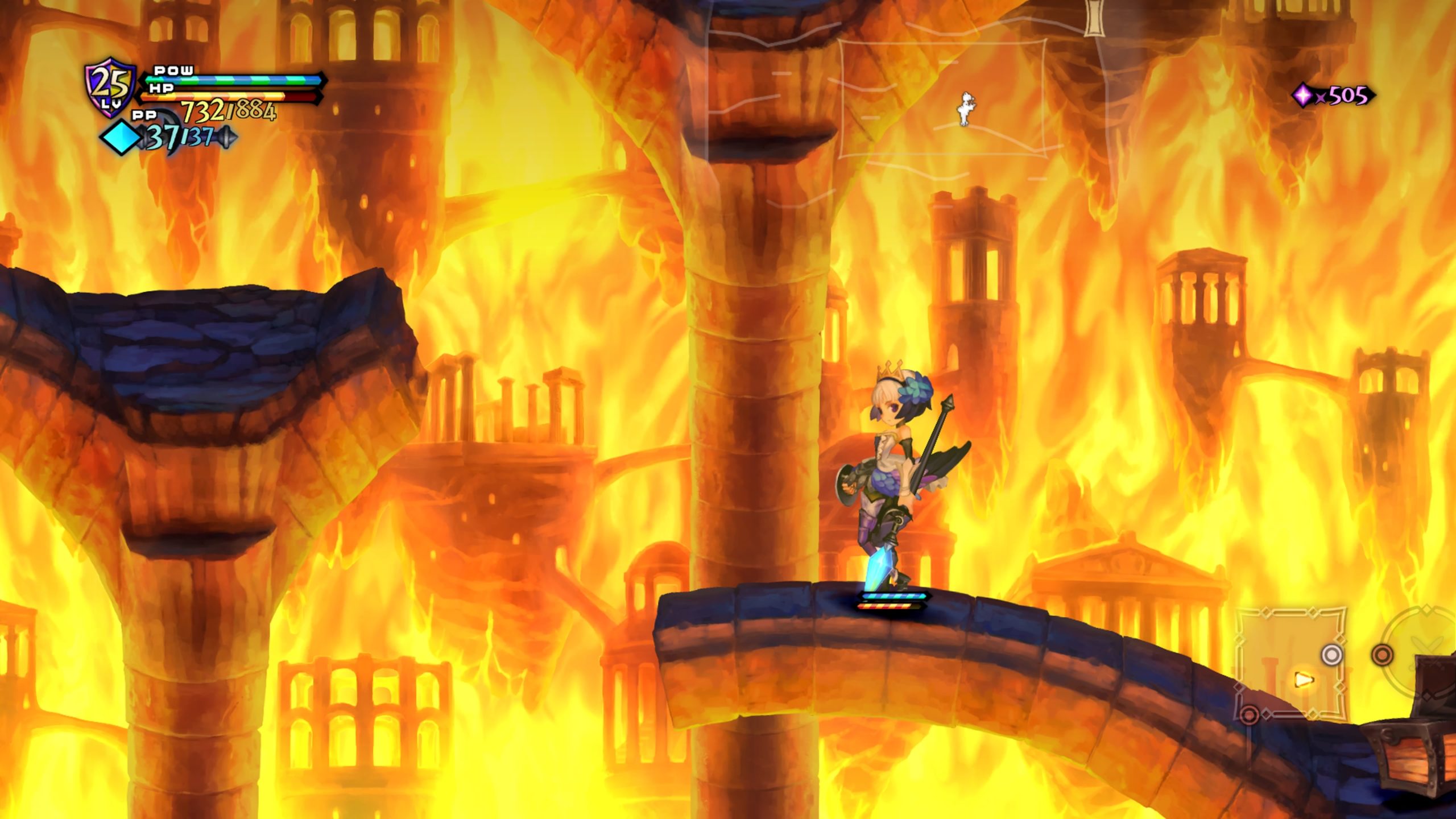 I had high hopes for this game. A Norse-themed JRPG sounded exactly like my kind of game, but it didn’t live up to my expectations. It’s not terrible by any means, but the gameplay wasn’t for me.

Odin Sphere: Leifthrasir is a solid Action RPG that's not for everyone.