Review – One Punch Man: A Hero Nobody Knows

A Hero Everyone Knows, but a Game No One Will Play 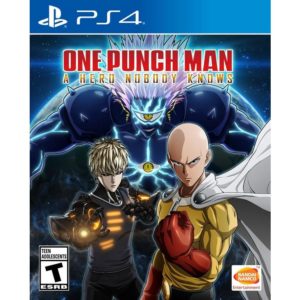 One Punch Man is a popular manga/anime series that examines what it’s like with a hero going through his third run of new game plus. While the series brings new light to a familiar archetype, A Hero Nobody Knows attempts to be the game to translate such a concept into an enjoyable fighter. I attempt to review One Punch Man with high hopes. 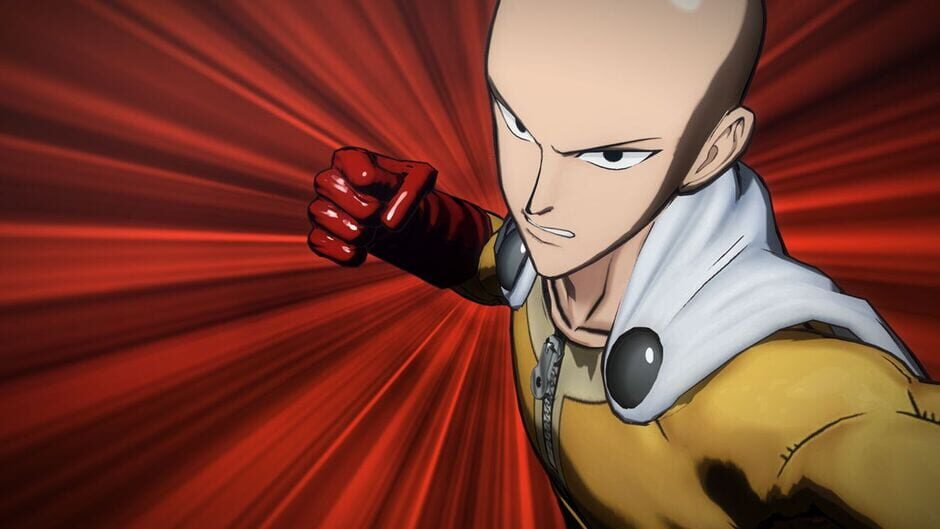 There are no drug or alcohol references or uses.

Some insect-like characters are depicted with exaggerated-size breasts and/or with skin patterns/outfits exposing large amounts of their breasts/cleavage. A character named Puri Puri Prisoner is famous for being a male magical girl, but devolves into nudity instead of a cute outfit. A bright light covers his extremities. The dialogue also contains some suggestive material (e.g., “There’s more than a French kiss in store for you”; “This is all that pervert’s fault….”).

The otaku is real, so expect talks of demons, dragons, and gods like they’re another option of ice cream.

Exodus 15:2 The Lord is my strength and my song; he has given me victory.

Though taken from their context, if someone could only survive off of two Bible verses, these are good contenders. One Punch Man: A Hero Nobody Knows relies on Saitama rushing to save you, and when he arrives, he finsihes the fight effortlessly. But until then, fighting, and staying alive are the main focus for victory. I don’t think I need to go on, because the parallel between waiting on Saitama, and waiting on the Lord are analagous. I am thankful, though, that our God is not challenged by getting lost easily, even if His timing may be unclear to us. 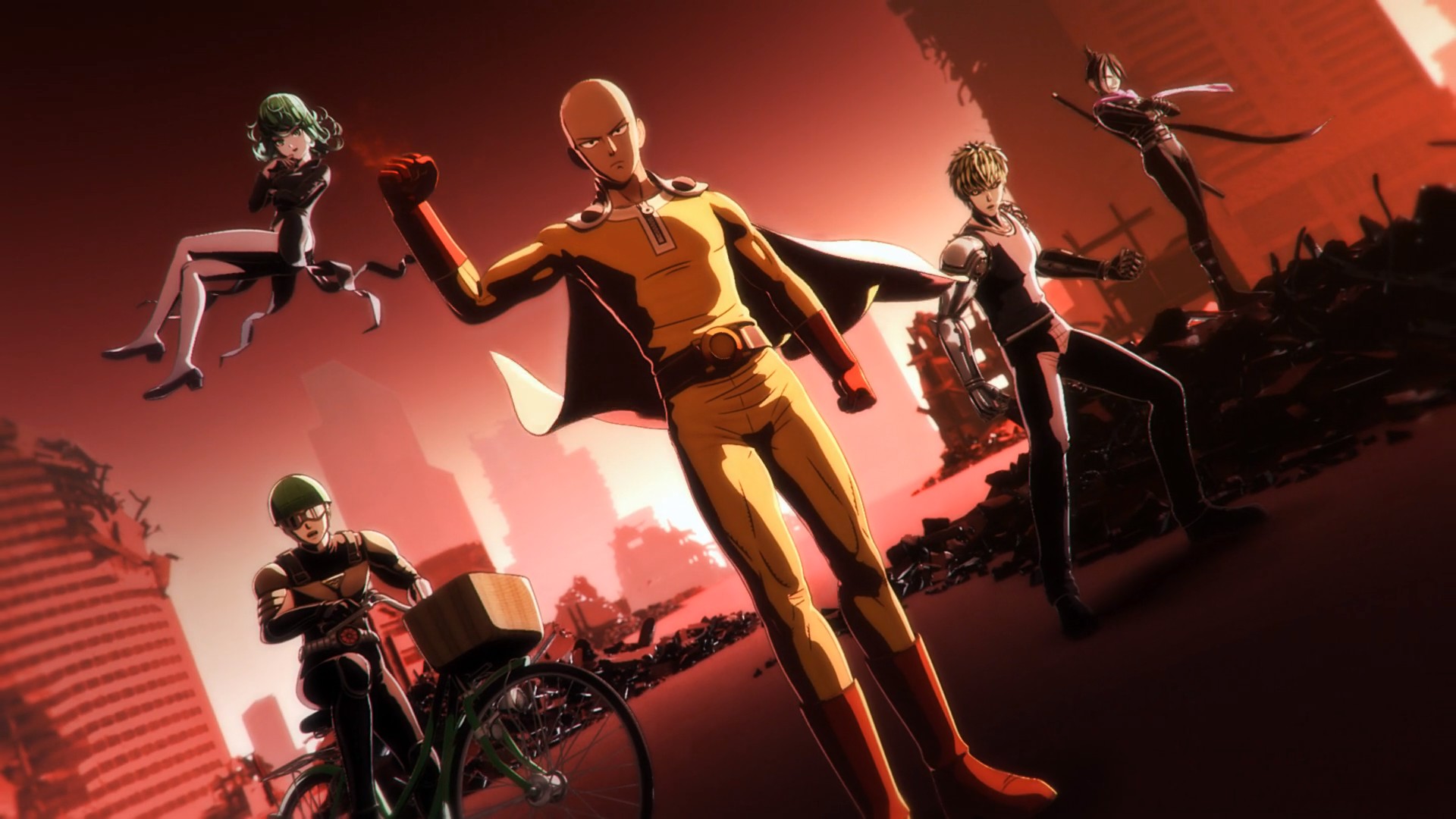 One Punch Man’s single-player mode includes an all-too-familiar adventure mode consisting of following the main character through the established story, fighting the villains progressively in line with the manga and anime. Players climb through the Hero system by doing work as a custom hero of the player’s making. The hero name for the custom character is based on attack preferences and clothing style choices.

My superhero name was: Mr. Nobody.

The work involves fighting other characters to gain ranks. This staple is not new to games; a rank-based quest system is a side feature for nearly any game. But since the Hero Association is integral to the anime show, it feels more deeply part of the world than, say, Final Fantasy XII, whose ranked based bounty system is optional. You gather missions from talking to people around the expansive city. 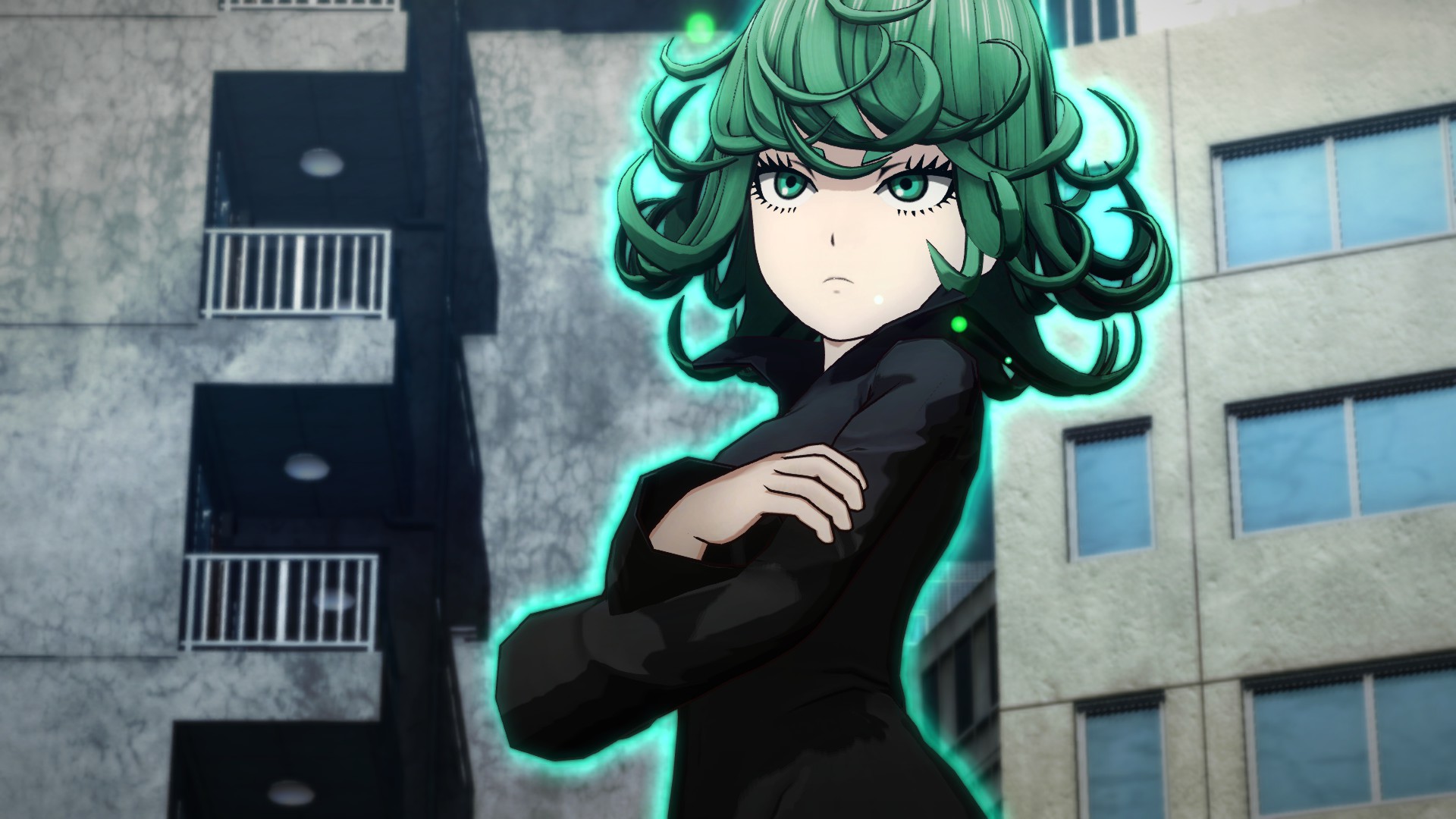 The story begins with the battle against Vaccine Man and continues through Boros, the main baddie. Each time, your hero is there, and is challenged to fight until the story picks up with Saitama. Your involvement means nothing; all it warrants is a small acknowledgement from Caped Baldy, “We keep running into each other!”

When fighting a unique feature called “Hero Arrival” occurs in the midst of a skirmish, and a countdown begins until Saitama’s appearance. It begins with a hefty timer, but can be reduced with successful attacks. Players then take control and end the fight with a single hit. The feature is active in both adventure mode and multiplayer modes. Hilariously, if two Saitama go against one another in multiplayer, the one who loses simply “aight ima head out,” and the fight is over. 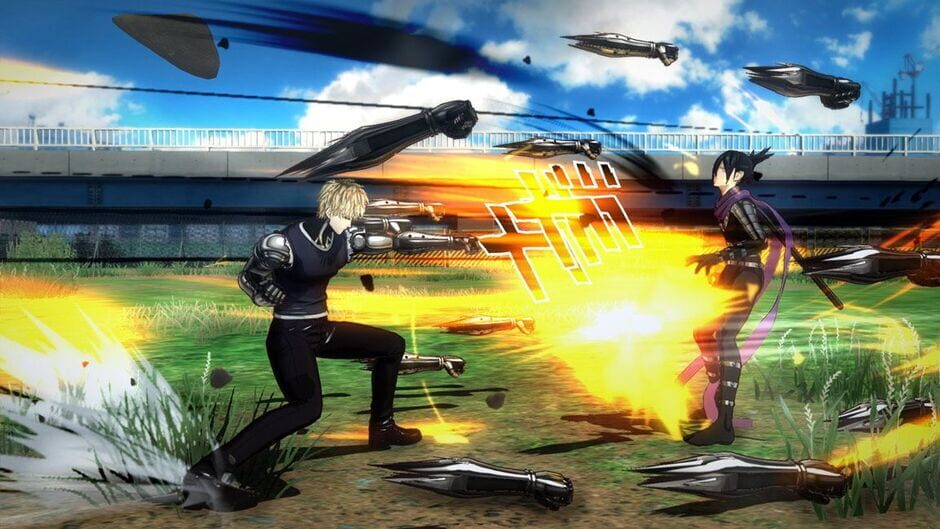 It’s at this point, my praise tank is empty for the One Punch Man game.

It’s a tale as old as Superman: can you make a true Saitama experience? It seems we’re still waiting for an answer to that question for both Caped Baldy and the Man of Steel. A Hero Nobody Knows is a sad game in need of lots of improvement, in everything from sound to gameplay. It perplexes me why Spike Chunsoft struggles with making good fighting games. The developers CyberConnect bring the Naruto Shippuden series into wonderful gaming experiences, serving as a commendable model for anime games. But One Punch Man backtracks in terms of today’s current-gen standards. I am left with the impression of playing a game from the PS2 era.

The graphics are nothing to behold, and are possibly One Punch Man’s biggest disappointment. Every character sprite, background, and effect during battles are low-caliber, beginner designer templates. I was underwhelmed when fighting; there is no flash, no pizzazz, and that’s something One Punch man had plenty of. Remember Ultimate Muscle? The wrestling game for GameCube? Yeah, it’s like playing that. What happened between this and Jump Force, Spike Chunsoft? 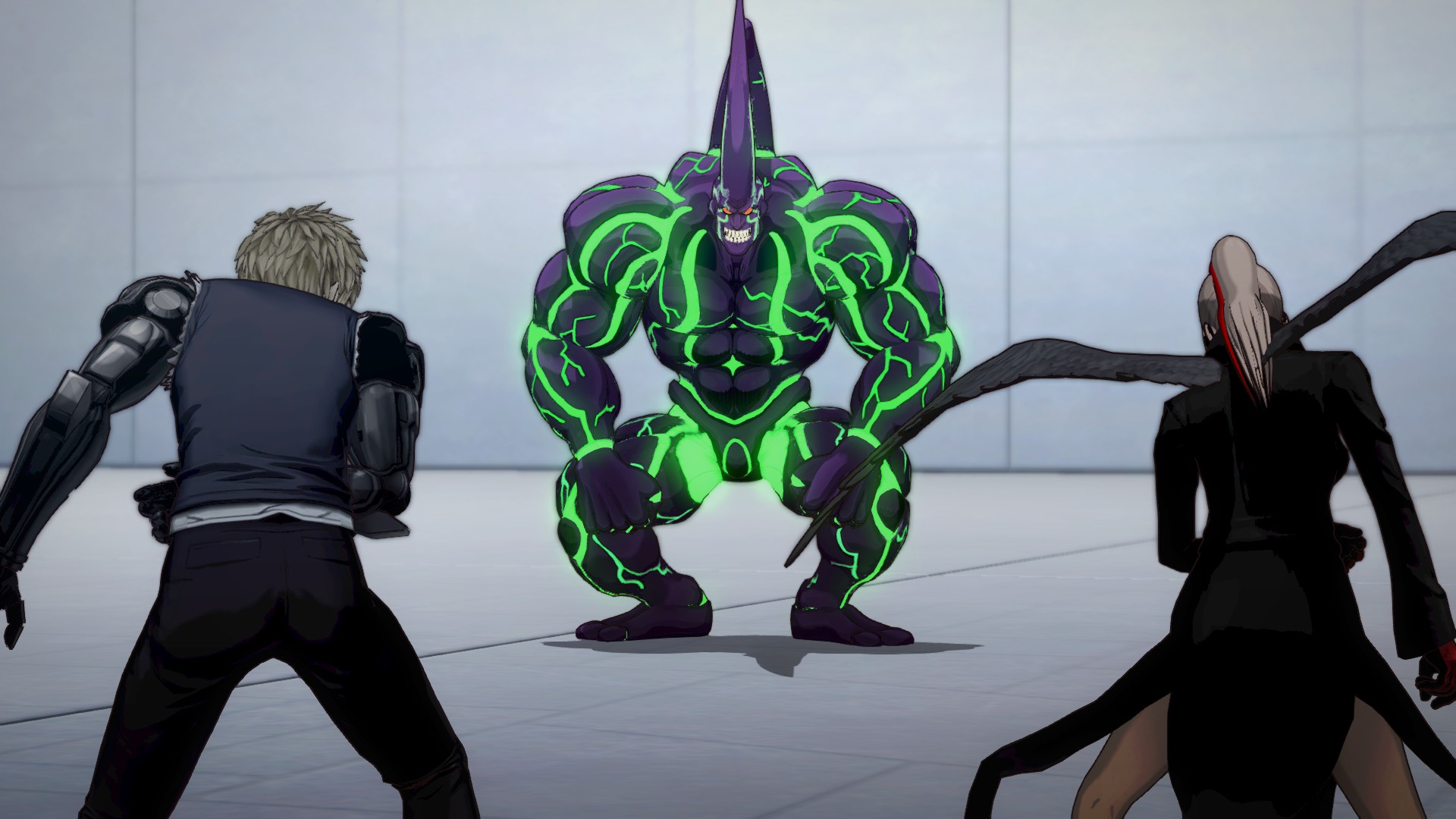 I dislike that I knew what I was getting into when the character customization screen only had a few choices—a few bland choices, all items from the characters of One Punch Man, but nothing original, save the accessories. Accessories, ranging from hair bows to angel wings, are positioned atop the head, and require the advanced editing page to move them where the player wishes.

I can’t say anything about the music, since I don’t remember much about it. This concludes the music section.

The voice acting is phoned in, having as much emotion as the stoic Saitama himself. Even Puri Puri Prisoner, notorious for being hyped for the power of love and pronouncing his attacks, in the series is…shallow. All original VA’s from the dubbed anime return, but most of the game is centered around your hero, and the people of the city. Moments from the anime appear nearly line for line, and shot by shot This is disappointing; I want scenes and moments unique to the game! 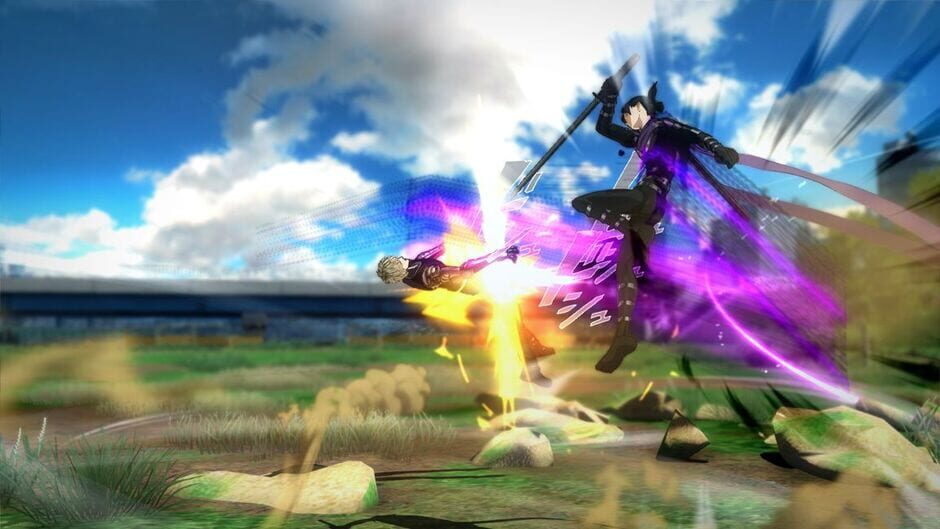 Rolling around at the speed o’ Sound, Sonic!

One Punch Man: A Hero Nobody Knows fails to be even an average game. It delivers nothing new to the fighting genre, or brings justice to the anime universe. With terrible voice acting, sub-standard graphics, and bland gameplay, fans of the series need not spend their money on this. So all in all, Saitama being overpowered isn’t the reason for One Punch Man being a bad game. Spike Chunsoft simply did not source their ace makers to produce this project. 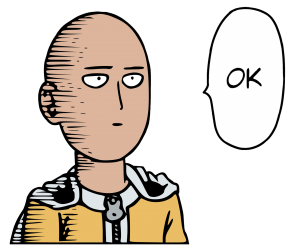