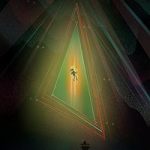 Most gamers are likely to have played a Telltale game or one similar to that developer’s trademark.The graphic adventure genre is nothing new, as we see early examples like Hugo’s House of Horrors. Not many studios manage to make the experience feel unique, however. Night School Studio has accomplished that with a game called Oxenfree.

Violence: Most would consider violence to be of the blood and guts or “shoot ’em up” variety. While Oxenfree does not feature traditional violence, it includes situations of a violent nature. At one point in the game you find your friend Clarissa is more possessed than the others. As I played this moment, she threw herself out the window to her death. This is simply one of the morbid examples of violence in Oxenfree.

Language/crude humor: I thought curse words would be more prevalent given the beginning of the game. The game started off with b****, d***, and h***. Later on during one of the more intense moments of the story, “GD” came out. I observed there being two crude jokes made. The first is about Alex and Ren being kids seeing each other naked and it not being sexual. The second joke is about a tower named after “Richard (Dick) Harden.”

Drug/alcohol use: The start of the game has what appears to be minors going to drink on the beach. The second offense is your friend Ren and his “special brownies.” The implication is that marijuana is in the brownies, although they are not mentioned. 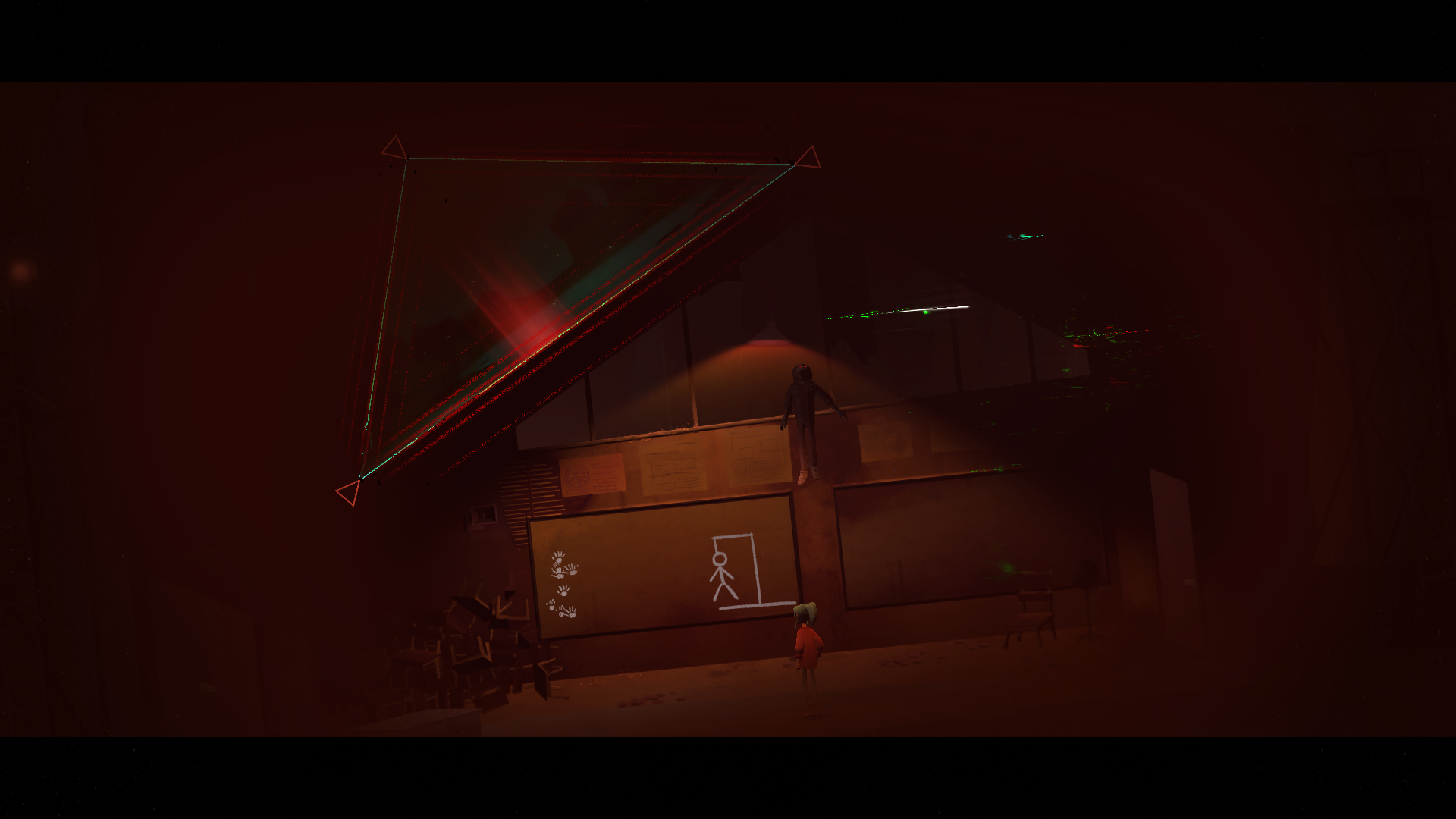 Spiritual content: This is by far the area you need to read. The spiritual content of Oxenfree made this reviewer quite uneasy. As I played through the game, several moments were unnerving. The example I gave earlier about Clarissa was very traumatic to watch. You do not find her body afterwards, and it is nonetheless disturbing. These possessions happen on a constant basis, even to Alex, who you play as.

Your first encounter with possession is Ren. It is frightening to watch as he levitates in the air while you attempt to help him. None of these events are a pleasant experience. There is another moment with Clarissa in the Adler Mansion where your friends are lying around unconscious and she is laughing at you, awaiting in the game she wishes to play with you. The ghost also takes over your step-brother Jonas towards the end of a sadistic game of hangman.

1 John 4:1 says: “Beloved, believe not every spirit, but try the spirits whether they are of God….” My biggest suggestion to our readers is to pray about what you feel when you play Oxenfree. The last thing we want is for you to step into it, feel apprehensive, but then continue on because we scored the game well.

Positive content: Something I did not expect was the opportunity to refuse questionable actions. You are able to say no to cigarettes, alcohol, and drugs. You have the ability to shape the game in a more optimistic way with how you respond in dialogue. Speaking of dialogue, there is an opportunity to say if you are religious, and the following conversation leads into God talk for a brief moment. 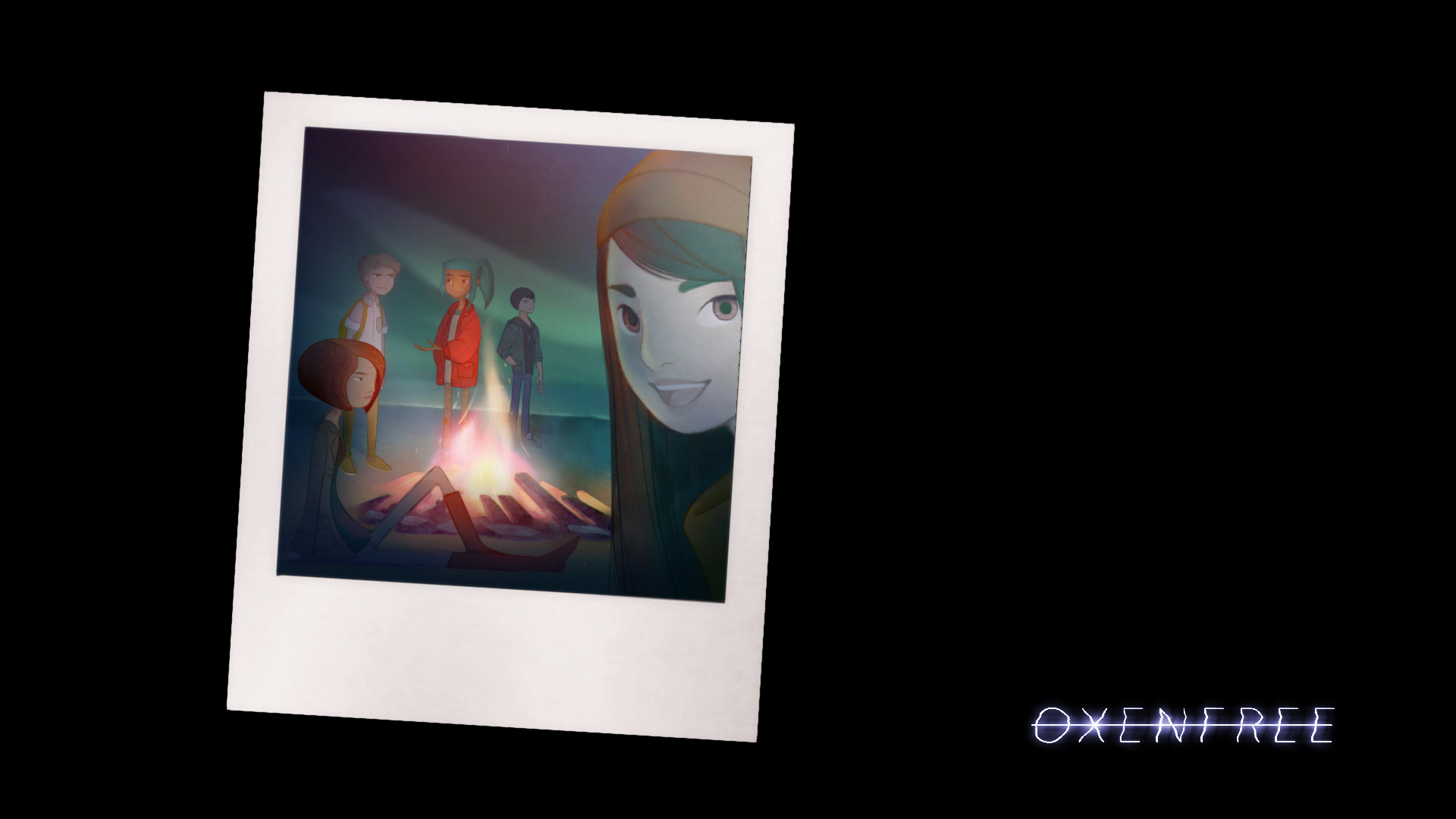 Just a bunch of friends, out for a normal night of fun… or are they?

The graphic adventure genre has staled a bit in recent years. The rise of Telltale games brought revitalization to it, and shortly after, everyone decided to make one. Game after game has gone by, and innovations have been few. With Oxenfree however, a simple approach has made a trite concept come alive again.

You start Oxenfree as Alex, a teenage girl making a trip to an island with her friends. The journey begins as your normal tale of high-school age debauchery, a group of underage minors drinking on a beach and playing their own version of truth or dare. As the story progresses, you accidentally open a portal into another dimension and allow a ghostly presence access to our world.

I was stricken immediately by the tension of this game. While the premise added to my feeling of stress, the personal interactions of the teens feels real and emotional. I experienced an involvement in their lives as I continued down the story’s path. Each time I choose dialogue, I nearly panicked, trying to pick exactly what the situation required. 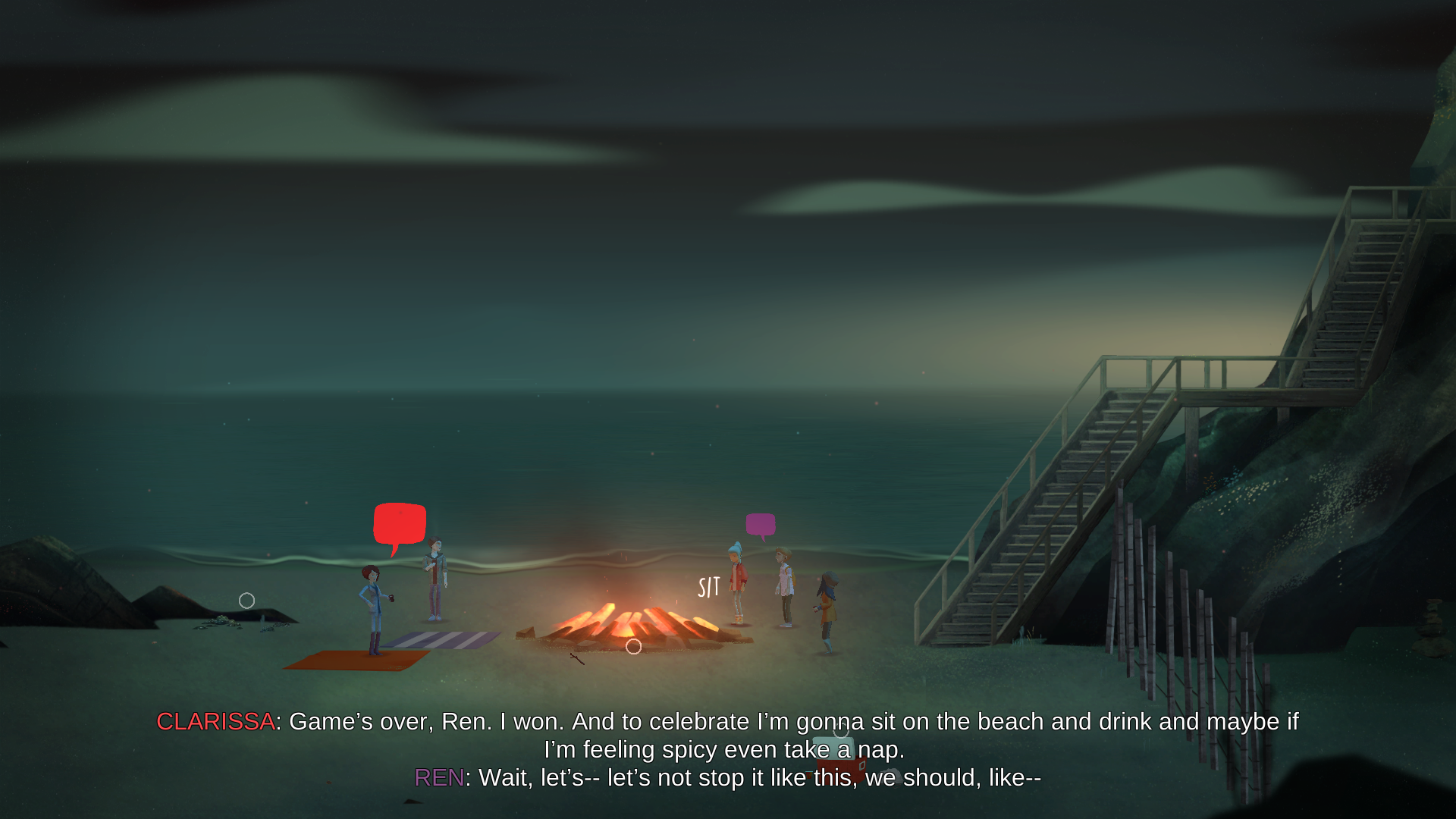 What could possibly go wrong on a weird island?

You make choices by the selection of speech bubbles. It is your decision whether or not to make choices, which is a nice feature. Another touch I like is that as each character talks, they have a personal talk balloon to let you know who is talking. Night School Studio also breaks up the monotony of your traversing the different areas of the map by inserting plenty of small talk which pieces together each scene.

The only issues I have are twofold. Your preference of dialogue can interrupt whatever someone is saying which can be annoying if the conversation seems important. The teenagers can also chat right in the middle of an audio diary, which is also frustrating. You can replay them, but you should not have to.

This can segue us into the setting and soundtrack, both of which are magnificent. Every scene you move to has a different feel. You almost think your characters are walking across an interactive painting. The musical score imparts a beautiful tension to the scenes that makes you experience uneasiness and an anticipation for what will happen next, both feelings you want from this style of game. 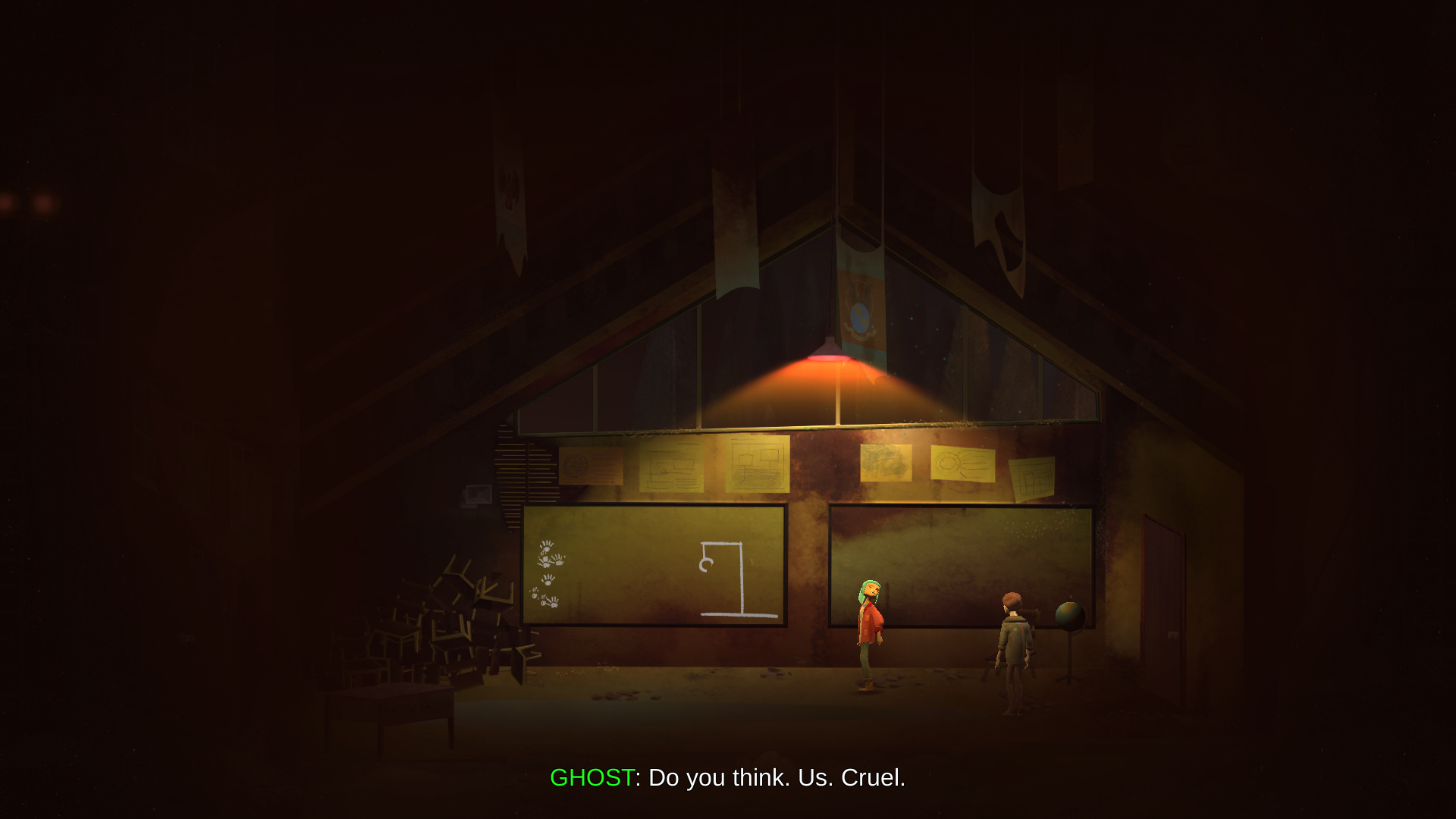 This is a game I do not wish to participate in.

The narrative which underlies it all is disturbing. The portrayal of the ghosts is at first harmless, but grows into vicious encounters. First I am kicking a soccer ball with the poltergeist, then it is trying to assimilate my friends. The quick reversal from benign spirit to callous phantom happens almost too quickly.

Your only tool in all of this is a radio. It is a unique choice that adds charm to the game. While some uses like radio-activated locks are odd, uses like hidden clues leading to notes and anomalies to add backstory is a stroke of genius. You also use the two-way to tune in the correct frequency to free your friends from the spirits clutches. I wish I had such a powerful little device.

The story however leaves a bit to be desired. There are moments that need tying up. I want to understand Jonas more, and know why Ren has the insecurities he does. Nona is a character nearly unused as a plot device. For a narrative that is so well woven together and manages to touch on other secondary characters, the misuse of these others is a surprise. 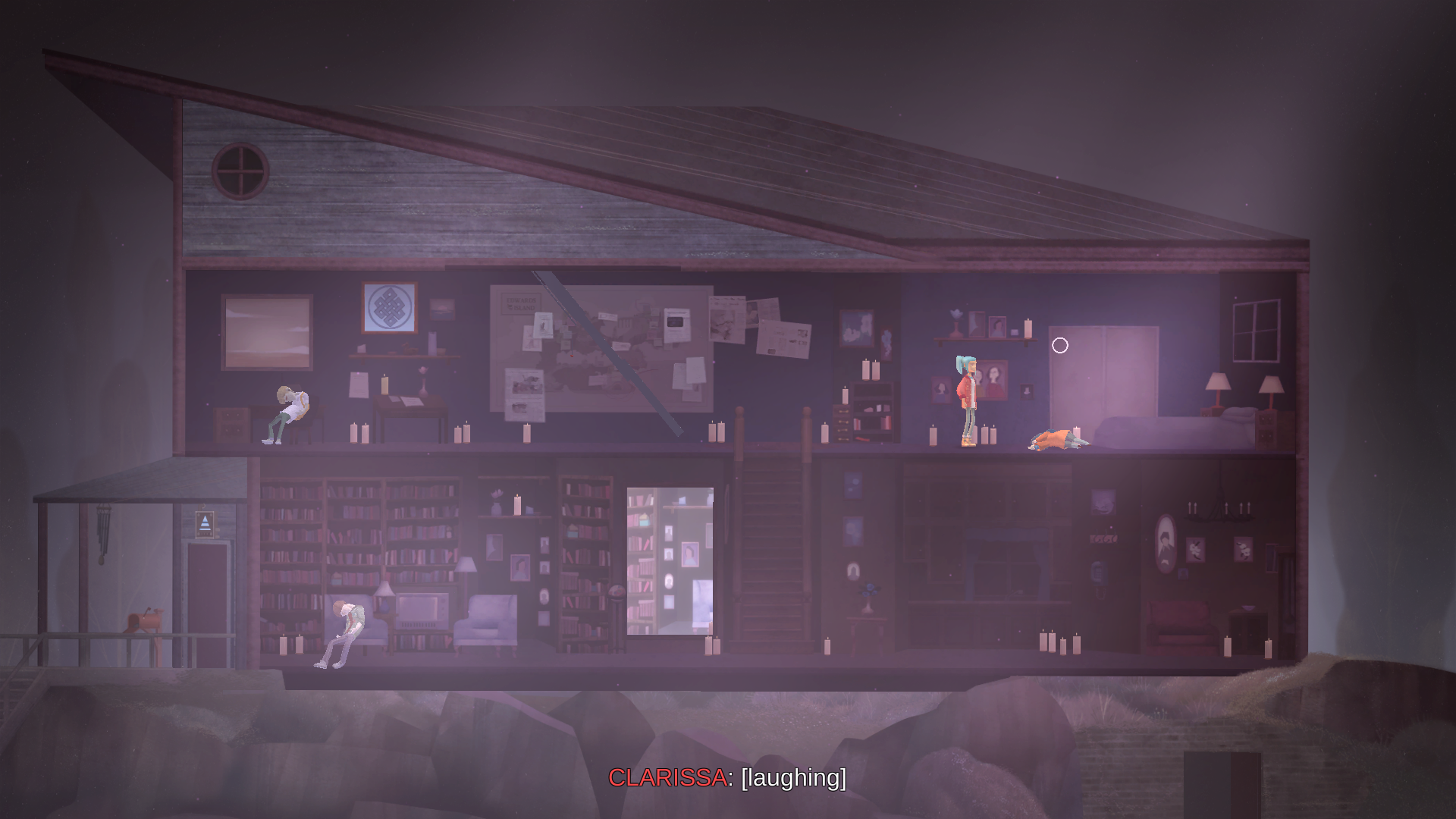 The plot is not without plenty of high points. While ghosts confront you in the story, you also confront your own ghosts, otherwise known as the past. Most characters go through some development where we learn something of their backstory, but my favorite is the moments spent with Michael, Alex’s deceased brother. The game centers some of your play on time loops, and in periods of the ghosts messing with you and attempting to posses you, Alex relives several interactions with Michael. The cornerstone of the plot is repairing the past, and in these scenes you know you should not be there, but your actions can reshape the future.

Oxenfree has two endings, a good and a bad. It is tough to go into much detail without giving away plot points, but it is easy to figure out what dialogue options belong to what category. These choices change the other characters perception of you, which in a story with lives at stake will bring consequences. 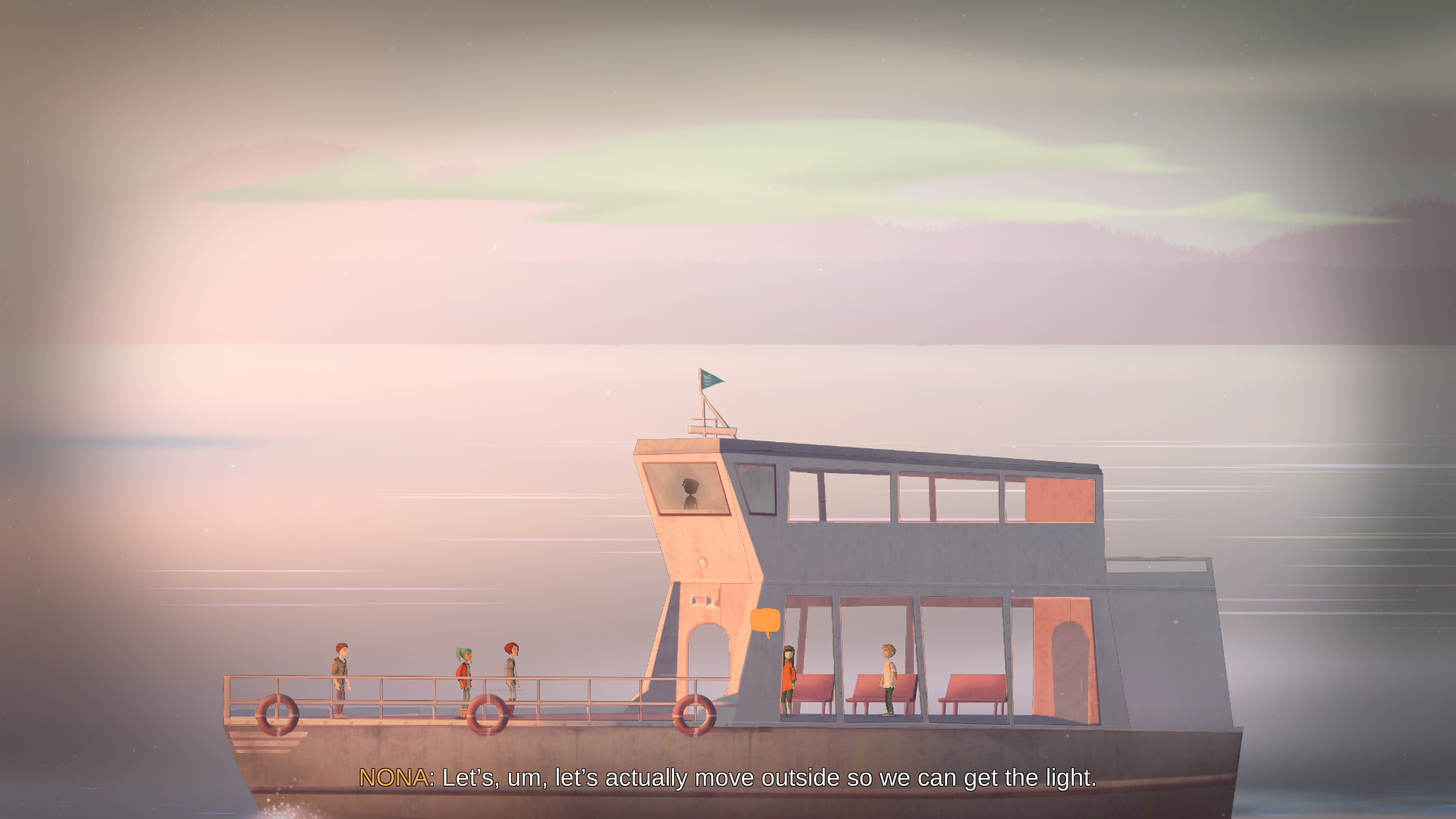 My completion of Oxenfree brings me to a simple conclusion. Even with the flaws in the story, the setting and construction of gameplay has a beauty that is missing from other graphic adventure games. The small talk between the characters drives home your connection to them, and when Oxenfree ends, you feel as though you personally escaped Edwards Island. Night School Studio maximizes their visions strengths and limits the weaknesses. If you are into Telltale games and want something new to try, just holler “Olly Olly Oxenfree”!

While Oxenfree has a few flaws, its beautiful backdrop and stirring musical score set the stage for a tense story that has you flinching at every turn. It may be a bit too creepy, but the emotion and connection you feel with the characters will spur you to the finish.