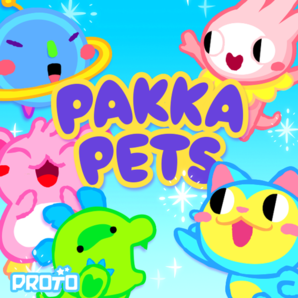 Back in the late 90’s and super early 2000’s, I was one of those kids with at least three digital pets on me. If you’re a 90’s kid, you know what I’m talking about. It started with Tamagotchi and it branched out into other brands such as Nano Pets, Giga Pets, and even the original Digimon Digivices. I had one…of each. It was a lot of fun to show off what pets you had, brag about your rare monster, and in the case of those that could link up, fight or interact with a friend’s pocket beasties. I’ve quietly loved these games, even to this day, but nothing’s quite captured the nostalgia of those old pocket pets. The new versions of the Tamagotchi are kind of gimmicky and far too complicated. There’s not been a good Digimon Digivice in a very long time, and a lot of the apps for phone pets are admittedly bad. I saw this little title as an ad within one of my other ios games and thought I’d give it a try.

Well yes, there’s some gross humor, but it’s nothing that we’ve not seen Japan snicker about a thousand times over. Your pet poops. This is a given. It’s cute swirly poo and generally it’s a stinky pile of…well poo. However, on rare occasions, said poo will have a flavor. Or a face. This poo can be used as ingredients to cook treats for your pet. Yes. Your pets eat their own poo. It’s gross, but it’s nothing to shoo the kids out of the room for.

Pakka Pets is a largely harmless, happy-go-lucky sugar coated game. There’s very little about the game that isn’t positive, in fact. You get cute pets, you take care of them, feed them, and play with them. As you raise your creatures, they get older and evolve into new kinds of creatures. Once they fully mature, they will either move on with their lives and find a career for themselves, or you can assign them as a local in the town. It’s simple, sweet, and has an overall feel good atmosphere. 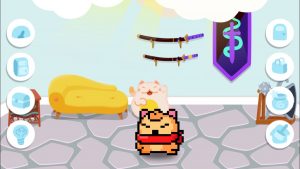 I had a lot of fun decorating my home. There’s a lot of decorations that you can obtain in the marketplace.

Pakka Pets starts out with a cat that looks remarkably like Rover from Animal Crossing explaining the world, your role, and giving you a place to stay. After that, you get your first egg and a walkthrough of how to take care of your new pakka pet. Not-Rover hangs around just long enough for you to get the ropes, then you’re pretty much on your own. The game is essentially a glorified pocket pet at this point. You have to check on your pet every hour or so to make sure it’s fed, happy, devoid of poo, or lights out. 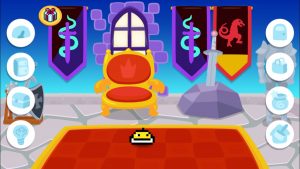 The gameplay is pretty basic. You can go outside, shop, mix food, or decorate (buttons on the right) or you can check stats, check the fridge, check storage, or turn off the lights (buttons on the left).

Your pet will go through four stages of growth: newborn, child, teen, and adult. It takes less than an hour to grow a newborn into a child and as long as a day to go from teen to adult. There are different eggs available, each with pakka pets exclusive to that egg. For example, the default egg as ten total monsters that hatch from the egg or grow out of the newborn and kit stage. The form your pet takes depends on a lot of different factors to include the kind of food they eat, their average happiness, average hunger, and how much you discipline them. It takes a while to figure these things out, and for a while it’s a lot of fun. Ultimately, the goal of the game is to discover every variety of Pakka pet.

In order to keep the pakka pet fed, you have to buy food and ingredients from the store using the in-game currency: hearts. These hearts are generated by your pet as you play with them, tap them, and bounce them around on the screen by touching them, picking them up, and dropping them down. They don’t give out a lot of hearts and you’ll soon find that you’ll be spending more than your pet puts out. 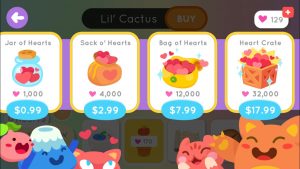 Trust me. Your dollar does not stretch very far. 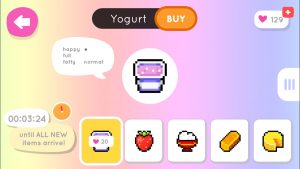 The amount of hearts at the upper left? That’s one play session with a baby. I MIGHT be able to fill up his hunger gauge. Or happy gauge. Not both

And here in lies the game’s biggest flaw: It’s almost impossible to enjoy it as a free game. You see, in order to unlock all the eggs, you need a certain amount of hearts. It takes several thousand hearts to unlock an egg. However, in order to keep your pet alive, you have to spend hearts on ingredients for food. So you can purchase a permanent boost for $3 to make your pet generate double the hearts. You do this and it’s still not enough. On top of having to buy food and eggs, as you release your pets into the city you have to expand. You can expand for hearts…or you can pay for it. Do you see a decor you want for your house? Those normally cost 100-2000 hearts. Do you want a new egg because you’ve discovered all the pets in the egg you’ve had? That’s 20,000 hearts. Or $3. You can use their special offers to unlock hearts but even this is painful. For one, there are so many ads and there is no way to close out of them. You have four video ads that you can watch a day for…what? A strawberry and 20 hearts. Not worth it at all. 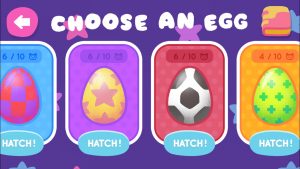 Essentially, this game is set up to get you interested and bleed you dry. You will have to pay for things or let your pets starve to death as you poke and prod them for as many hearts as you can get in their short, miserable lifetime. Most mobile games will reward loyal players by letting them earn the in game currency without having to spend money. Even games with insane in-game currency prices like Tales of Link will allow you to earn their in-game currency through playing the game. In Pakka Pets it feels like you’re filling up a bucket with a hole in it.

As a free game, it’s fun for the first week. Once you’ve discovered all the monsters in your first egg it’s a painful grind that takes far more of your attention than should. You have to constantly play with your pet to get any decent amount of hearts. You have to bleed out hearts to get the ingredients you need to avoid getting the ugly pets or to push away from the evolution routes you’ve been stuck on to accomplish gaining one more discovery. It becomes a grind and a bore very quickly. 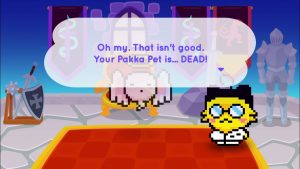 The game has promise; I won’t say it doesn’t. It has a cute set up, great graphics for what it is, interesting character designs (even if some look outright like Pokémon), and the music isn’t half bad…all three or four tracks. The game just lacks meat on the bones. There’s nothing to do in the town that you build, it costs way too much to customize anything, and the fact that you almost have to spend money in order to progress forward is irritating. I had fun with it for about two weeks but as you can see, I spent money on it—money I could have spent on DLC’s in games with more longevity but I badly wanted this game to be a good one. Sadly, while it has a lot of elements that tickled my nostalgia, it got worse the more I played. The previews for the game shows a bus station, swimming pool, fountains, and other games, but I played for nearly two months and I barely managed to afford the bus stop, a dirt road, and a movie theater which, while sporting a mini game, is essentially there to trick you into watching more ads.

Perhaps Pakka Pets will make changes and improvements, but as it is now it’s a broken mess that starts out well but takes a sharp nosedive. The trailer shown on the official site has a lot of features that I was never able to achieve or unlock, but perhaps these are plans that will come to fruition in the months to come.

Pakka Pets has potential. It starts out charming, it's fun for a week or two, but it gets old and frustrating quickly. If you want something to relive the pocket pet days, it's not a bad option, but if you want to try to expand your town or discover every species, you're going to end up spending some money to do so. It's worth a week or two of play, if anything, but don't spend money on this app until they work out the glaring problems with their input and output of in-game currency.