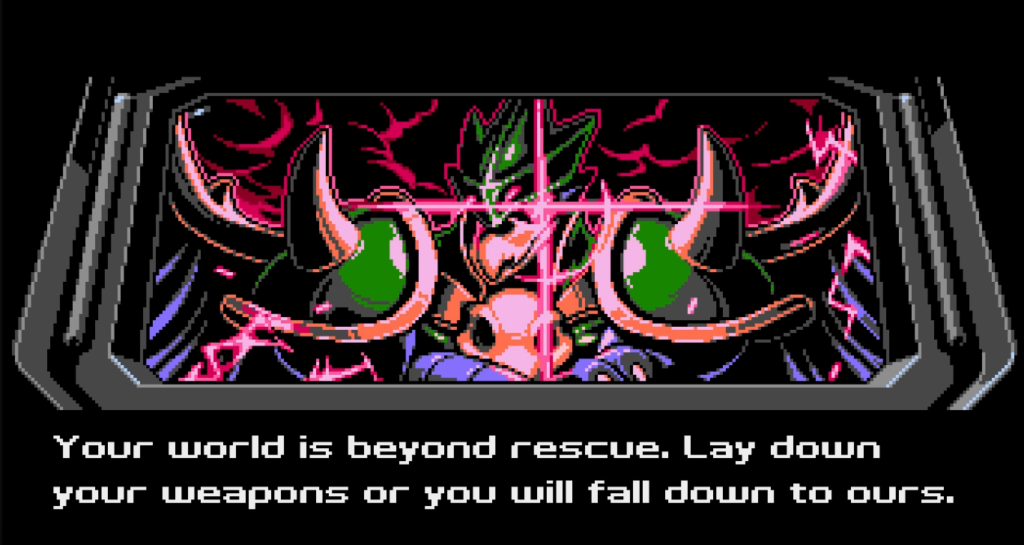 I want to make a Zero Wing reference here but that joke is WAY too stale at this point.

Saving the world from a demon apocalypse is never easy, unless you have a giant robot on your side! Panzer Paladin is a retro 2D platformer where you fight eleven Weapon Keepers across the world and stop the dark Ravenous’s demon invasion. The game is a blast from the NES past while delivering its own flavor with colorful pixel designs and a rockin’ soundtrack. Panzer Paladin invokes the nostalgia of any Nintendo player. But among some excellent modern platformers that we have now, is there even a place for a retro platformer? 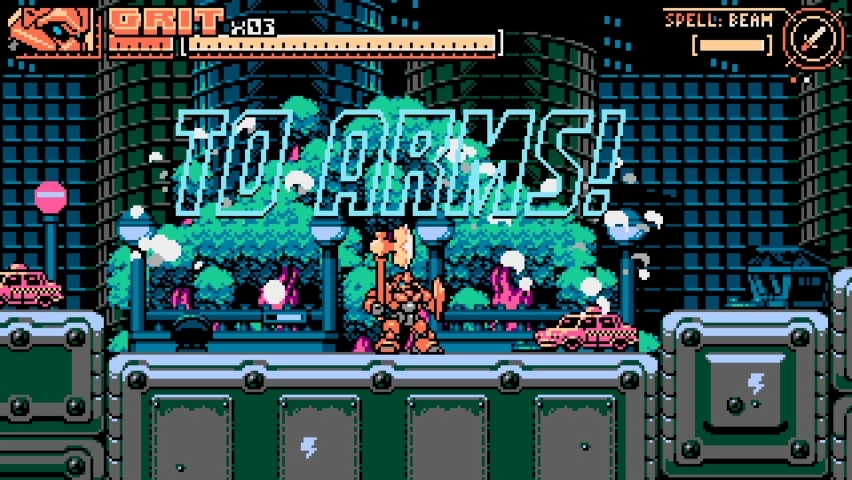 The player controls Grit, the titular robot, and Flame, rescue android and pilot, to destroy demon enemies. As the game is designed to be as close to an NES platformer as possible, the violence is not graphic beyond a scene after the first level where a returning boss slices a presumed boss enemy in half and takes over.

Creatures and gods from varied mythologies are used in the game. The central conflict is a doomsday prophecy foretold by a fictional ancient text called the Pazuzu Parchments.

The USA stage is set in a nondescript urban city. There are hotels in the background with hearts that possibly indicate other uses for them. Two bosses, Medusa and Lilith, wear provocative clothing. 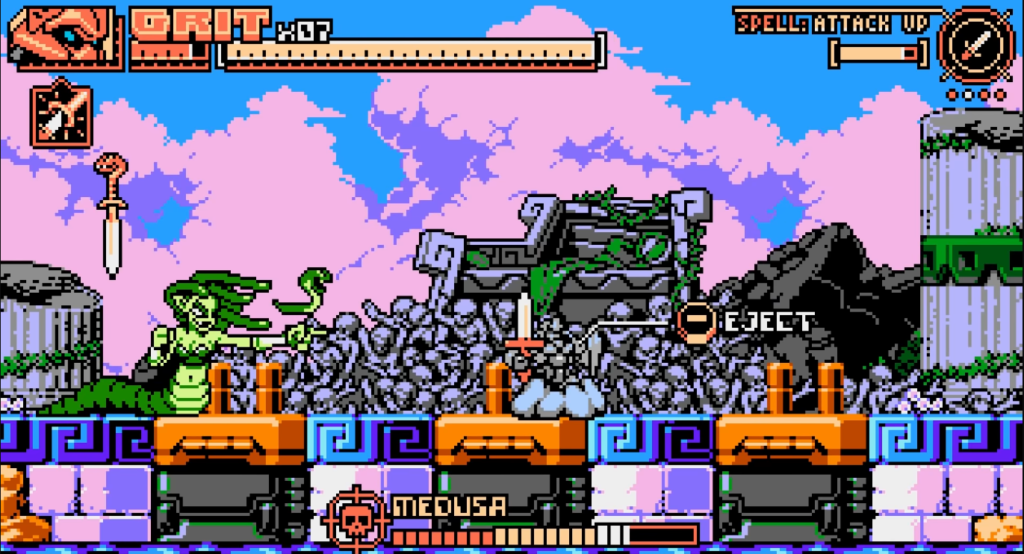 Panzer Paladin will feel comfortably familiar for fans of the Megaman series and Blaster Master from the NES. Actually, Grit, the paladin mecha, reminds me of the M-308 Gunner from Metal Storm. Tribute Games spares no quarter in wearing its influences on their sleeves. 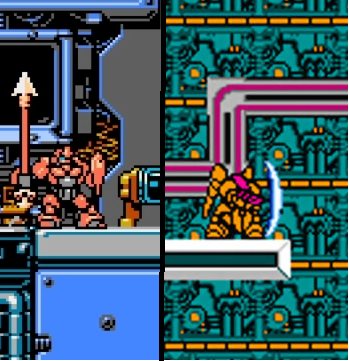 Long-lost brothers? Or a hidden lineage?

The gameplay format is much like a Megaman NES title. There are a whopping seventeen stages in Panzer Paladin. The first half consists of eleven stages across the world, where you defeat the Weapon Keepers. The second half is Lord Ravenous’s Forge, which is a six stage gauntlet. Once you enter the Forge, you must complete all six stages or you’ll have to start the Forge over if you return to the world map. 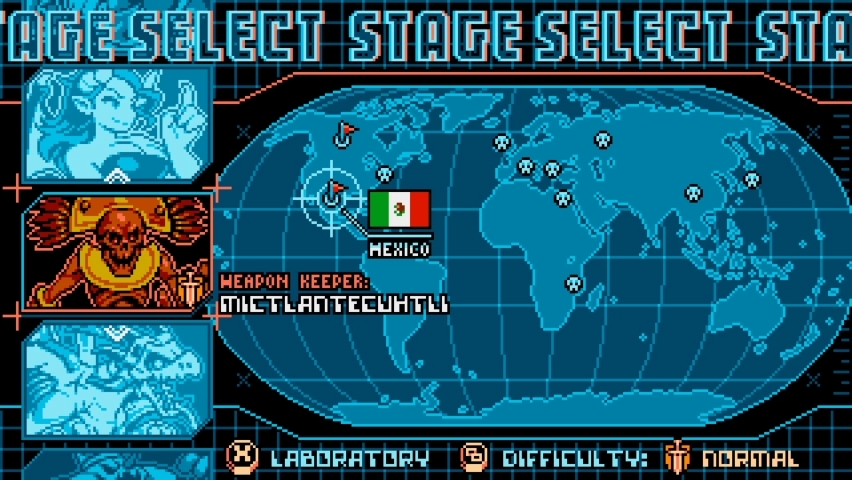 Who needs frequent flyer miles when your job is to protect Earth?

You gather weapons from defeating enemies and discovering hidden areas like in Castlevania. You can also exit Grit and play as Flame for areas that the giant robot can’t reach like in Blaster Master. I can’t help but compare these features to the mentioned titles because they look and feel exactly the same. However, this game stands well enough on its own. 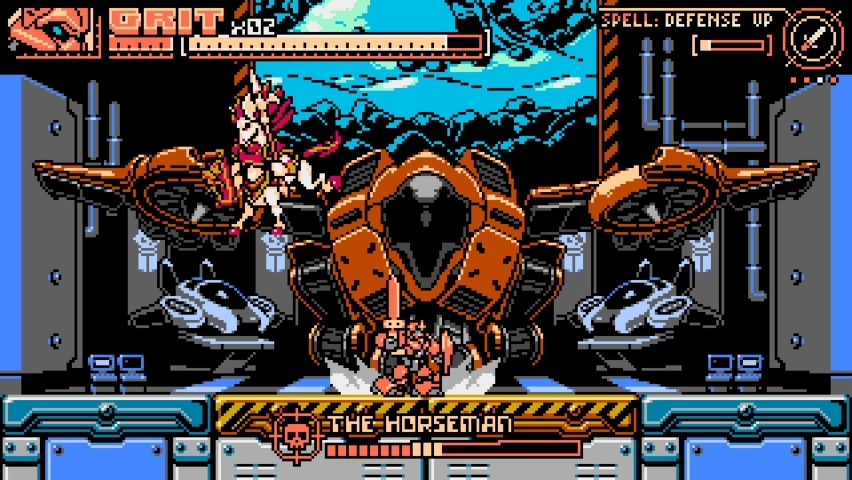 This is your “Protoman” for the entire game. Awesome.

You play as Grit for the majority of the game. He has a stiff jump and slow walk cycle. These are compensated by a variety of attacks: an up aerial that adds a slight diagonal ascent to your jump and a down aerial that acts like a pogo when hitting enemies in succession. Grit can also block physical attacks directly in front of him, as well as parry and stun enemies. Enemies can also attack low so you can crouch to block. You have a backdash for escaping unblockable attacks, and you can even use it as a way to dash across a level if you’re feeling frisky.

Totally did this on my first try. #natural

Weapons in Panzer Paladin are degradable, so having a healthy stock of weapons is important. You can use your saved weapons to upgrade your health five times on the map screen, but the system goes much deeper than that. Every weapon has its own damage value, speed, durability, weapon type, and spell. 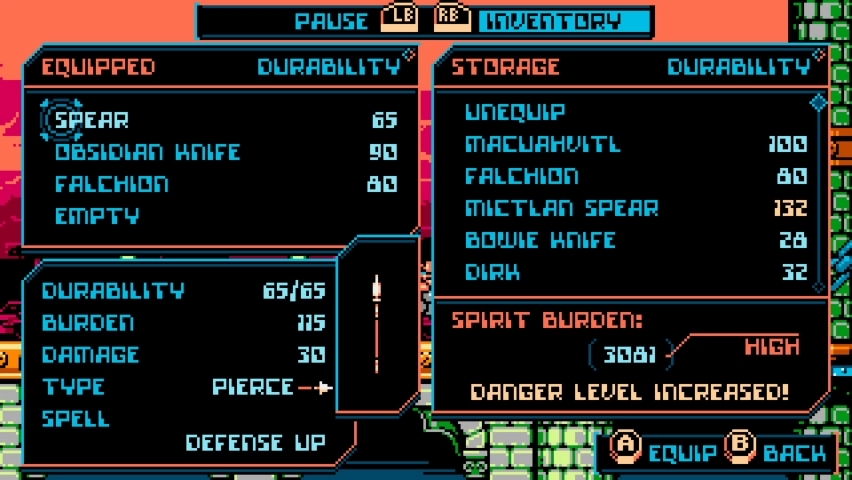 Balancing different weapons is tantamount to not only spells you prefer but also secrets locked behind weapon types.

The spell can be activated by breaking the weapon. Spells range from healing, stat buffs, and utility spells like flying or deflecting projectiles. You can also throw your weapon for extra damage. You run into weapons all the time, so breaking weapons is encouraged for that extra edge against enemies and bosses. 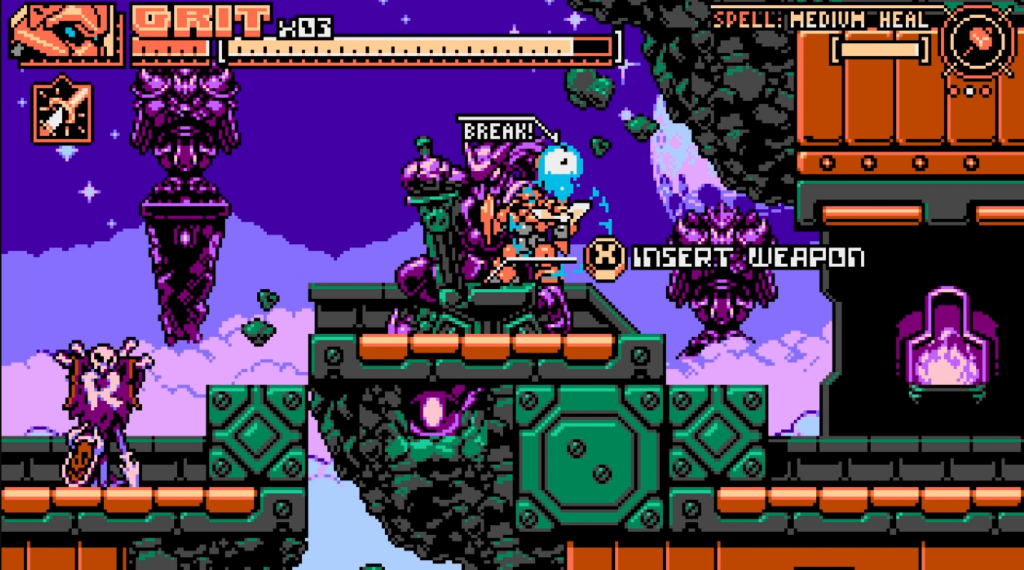 I highly recommend breaking weapons for a buff and power-up like Beam to do extra damage at the start of a boss.

You can also swap in your inventory to save more powerful weapons for later. There is also a fun customizing option where you can make your own weapon designs with their own stats. These designs get added into a pool that randomizes weapon drops from enemies. You’ll find some neat references here and there in the base weapon pool. 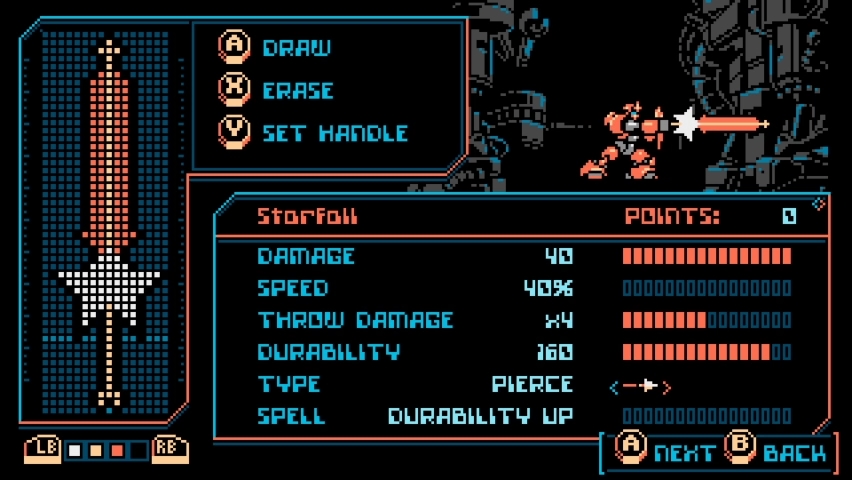 My sword’s name is ‘Starfall’ and it is the prettiest. It also slaps like a truck.

The art nails the NES retro aesthetic well. The animation feels stilted with a few bosses, but no frame is wasted. Enemy attack animations are well-choreographed to compensate for the player’s slow movement and heavy jump in the giant mech. The environment has that nostalgic garish contrast in each stage’s color palette; it sells the feeling that I’ve found a lost NES title. 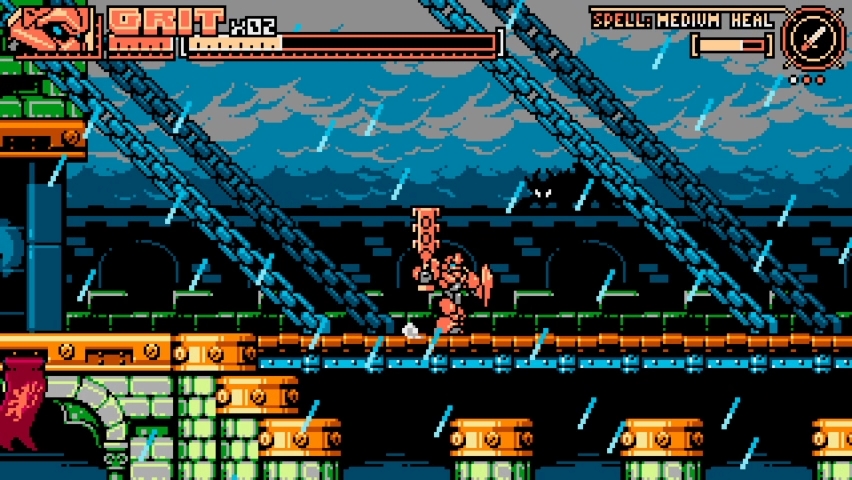 The music adds to the whole experience as well. Patrice Bourgeault, Tribute Games’s main composer, brings a solid rock flair to Panzer Paladin. The guitar and drum instrumentals along with the chiptune base hypes up the action and I can’t help head-banging to these tracks. The stage music for Tanzania is my personal favorite (by the way, Patrice Bourgeault’s music is available for free or name-your-price on Bandcamp!). 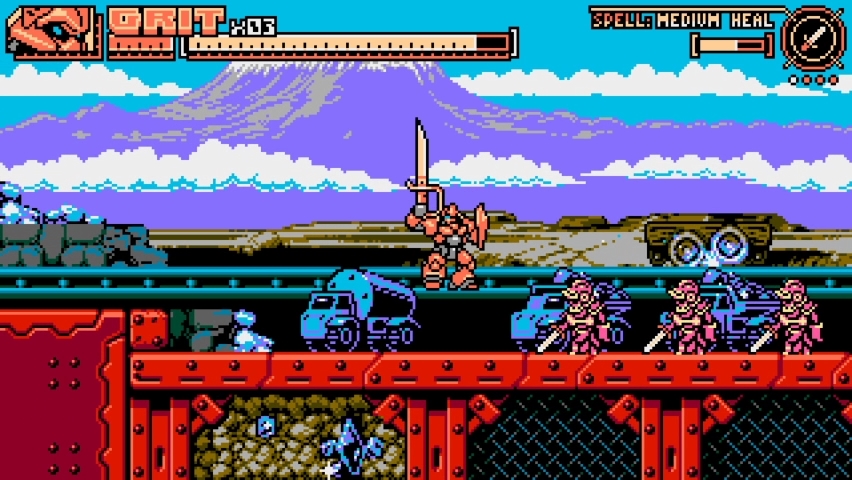 I wasn’t expecting to get a level like Minecart Madness…

After completing the game, remix mode unlocks. This mode, as the name suggests, randomizes levels, enemies, bosses, and weapon drops. This is a bonus for players who enjoy testing their mettle. I enjoyed my time with the game but I am not that devoted.

The biggest problem with Panzer Paladin, however, is that it’s geared purely towards the traditionalist, the kind of player who tackles old NES titles without relying on savestates or rewinding (because you’re so pro). You will struggle with the game sometimes; I cannot contest that. Patience is your best weapon in this game. 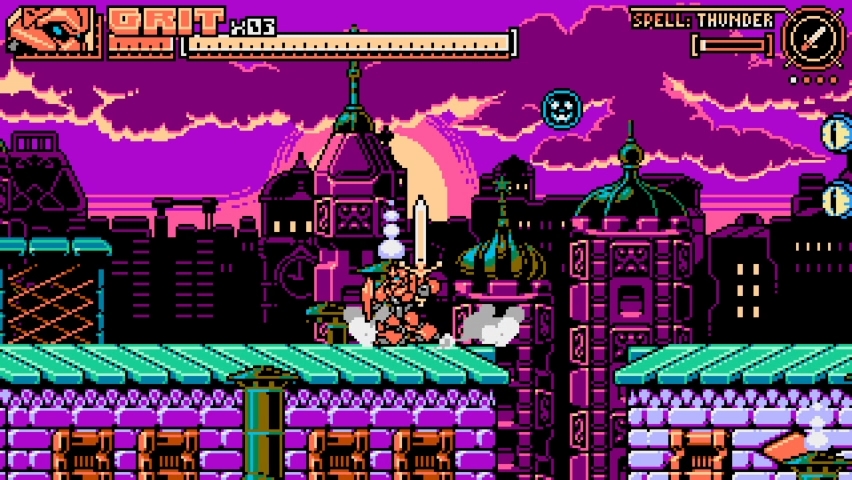 No, please. I don’t wanna deal with anymore enemies like Medusa Heads!

If you misjudge a jump and fall into a bottomless pit, you have to go all the way back to the previous checkpoint or even the beginning of the level. The levels are big and only contain two checkpoints that you can optionally use. Compared to the modern platformers we have today like Hollow Knight, Panzer Paladin is a reminiscent experience rather than innovative. But it’s a well-crafted experience. 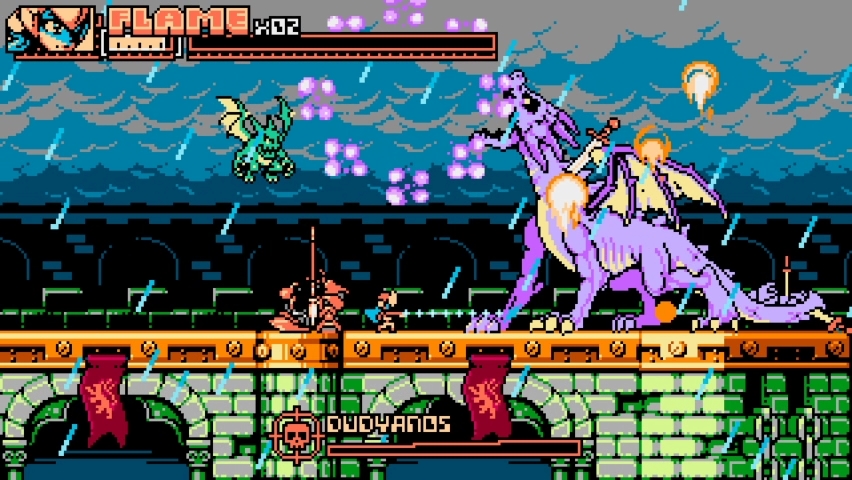 Taking down this boss with Flame felt so clutch.

I can confidently recommend this game to players who enjoy traditional 2D platformers. Despite coming up short to modern platformers, Panzer Paladin still proves to be an enjoyable time, recalling a gaming period when you weren’t saved a few extra minutes by quality-of-life features (again, because you’re so pro). Tribute Games displayed their technical mastery in this title. 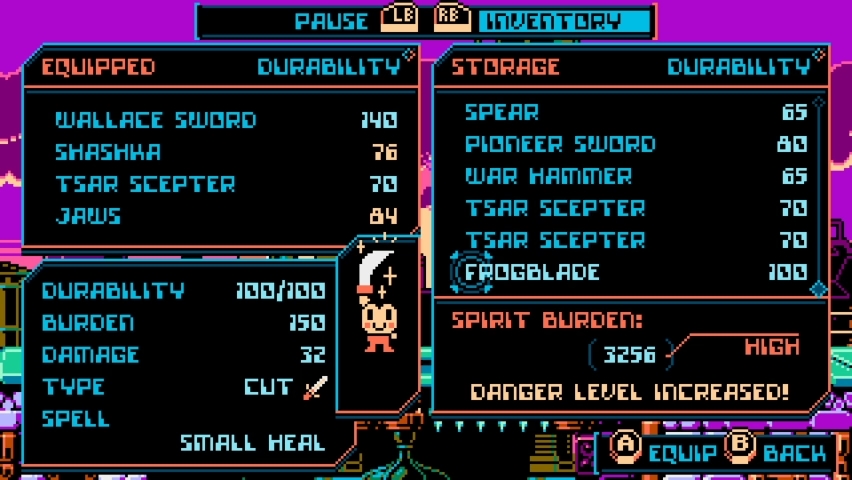 Panzer Paladin is a faithful recreation of 2D NES platformer games that offers one of the best retro experiences in years.