Sometimes getting into a series late can be a blessing. Certainly, you might miss details from one game that aren’t translated into the next. Bits of non-critical story might fall between the cracks, and you lose out on that feeling of seeing an annoying game mechanic fix or even turned into something fun. Then again, coming into the second game in a series with nothing to go on means you can look at it with fresh eyes. All of this is a long winded way of saying I’ve never played the first Party Hard game, and I can judge the sequel entirely based on its own merits, the one thing any sequel truly deserves.

Spiritual Content: There is some graffiti or posters with some dark symbolism involved but little else in the way of negative spiritual messages.

Violence: Party Hard 2 has heavy violence as a core feature. Most methods of eliminating targets involve a great deal of bloodshed. Those that don’t are still fairly graphic, such as setting them on fire or electrocuting them. While it is possible to finish a level by only eliminating certain “deserving” targets, there is really no incentive to avoid injuring other people whose only crime (that you know of) is being too loud. In fact, to get the most progress, wanton violence is often the best way.

Language/Crude Humor: Characters frequently use profanity in this game. Most of it is in unvoiced dialogue, but some comes up in the voiced cutscenes as well.

Sexual Content: Several female partygoers dress in extremely revealing outfits. There is also one male character sprite that wears nothing but a speedo. At one point in the game it is possible to pay a woman to do a striptease, which will result in pixilated nudity. There are posters that depict topless women with their breasts obscured. You can obtain a condom as a random item in any given level; giving it to a character will cause them to follow you, presumably with the intention of having sex. It is implied the protagonist has sex with his girlfriend and both are shown in revealing sleepwear.

Drug/Alcohol Use: It is easy to obtain alcohol and various types of pills in most levels. The main character is explicitly an addict, though others coerced him into drug use. Partygoers will frequently drink to the point of becoming sick or passing out. They will also exchange money in what are obviously drug deals.

Other Negative Themes: The police in general are an opposing force to the main character. If you’re not avoiding them, you’re manipulating them into doing something for you. (Spoilers) The game eventually reveals the main character’s therapist is manipulating him; while likely not intentional, this may paint a negative picture of mental health professionals.

Positive Content: Honestly there is very little, and what is there is largely up to interpretation. There are optional missions to save hostages and prisoners late in the game. While not depicting addicts as blameless, the game spends little time focusing on their fault and points rightly to those who prey upon the weak by distributing drugs as the real problem.

In terms of its simple core gameplay loop, Party Hard 2 has a strong foundation. The general idea of each level is the same: you must eliminate all your targets and avoid the police. Considering how crowded each party is, this means you will have to use a great deal of stealth to get away with your crimes. Stalking or luring partygoers into secluded corners is a valid strategy, but there are certainly others that can be employed. Apart from your trusty knife, you can find many items strewn about each level randomly. From gasoline to frag grenades, you will have several options to take out those loud nuisances. On top of this, the environment itself has plenty of places to interact with to create further traps and obstacles. 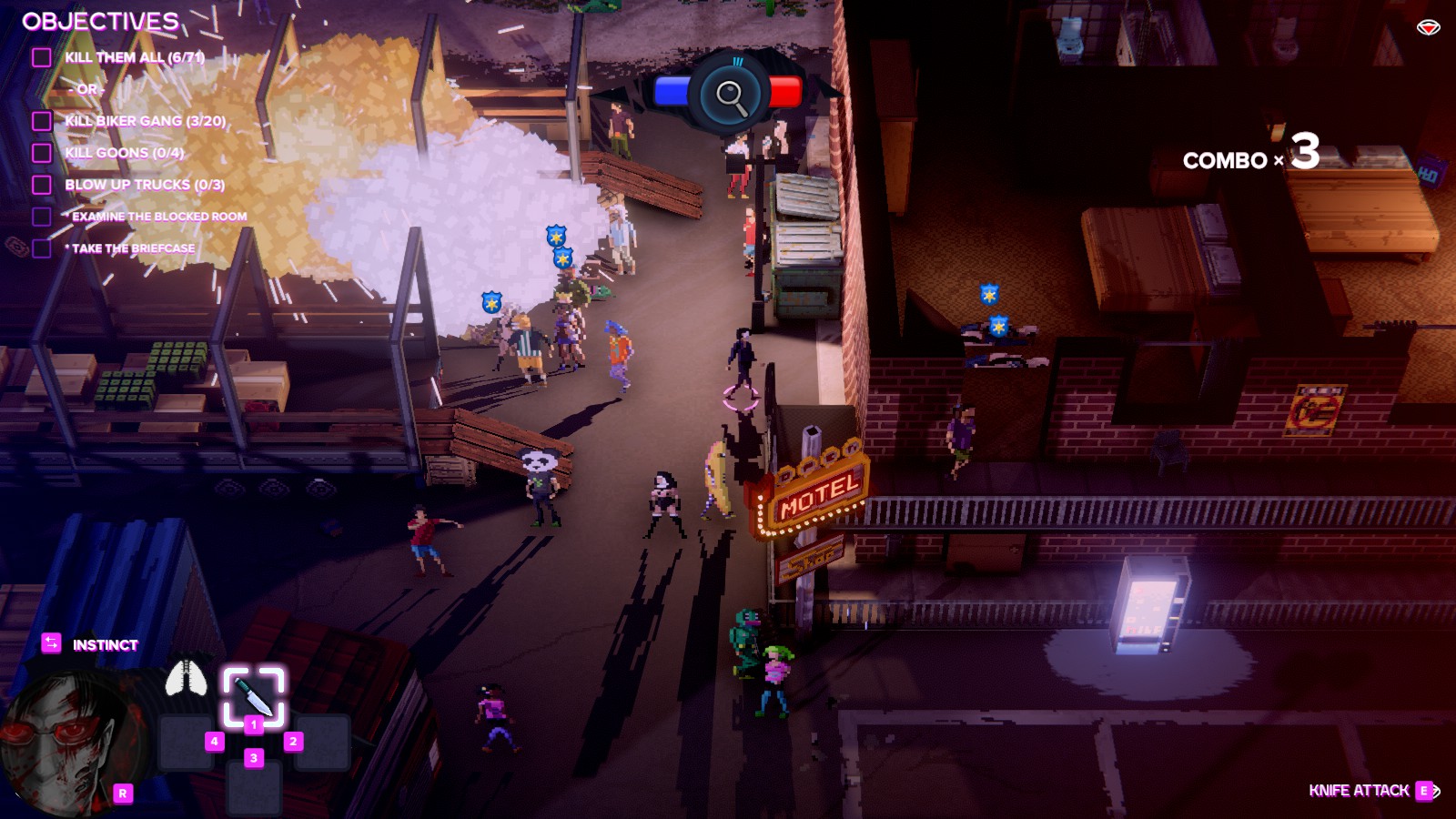 Speaking of the environment, it is exceptionally well designed. While all characters are blocky 2D sprites, the levels themselves are largely three dimensional. This not only makes them feel a little more lively but also helps to make sure that each and every target on screen stands out. Each level is distinct and offers its own unique opportunities and difficulties. The musical backdrop is a slightly different matter; while there are several tracks in the game, it should surprise no one that they are all of the electronic dance genre. If you’re a fan of it I’m sure there is enough variety to appease you. If not… well, be thankful that unlike the game’s protagonist, you the player can control how loud the music is. 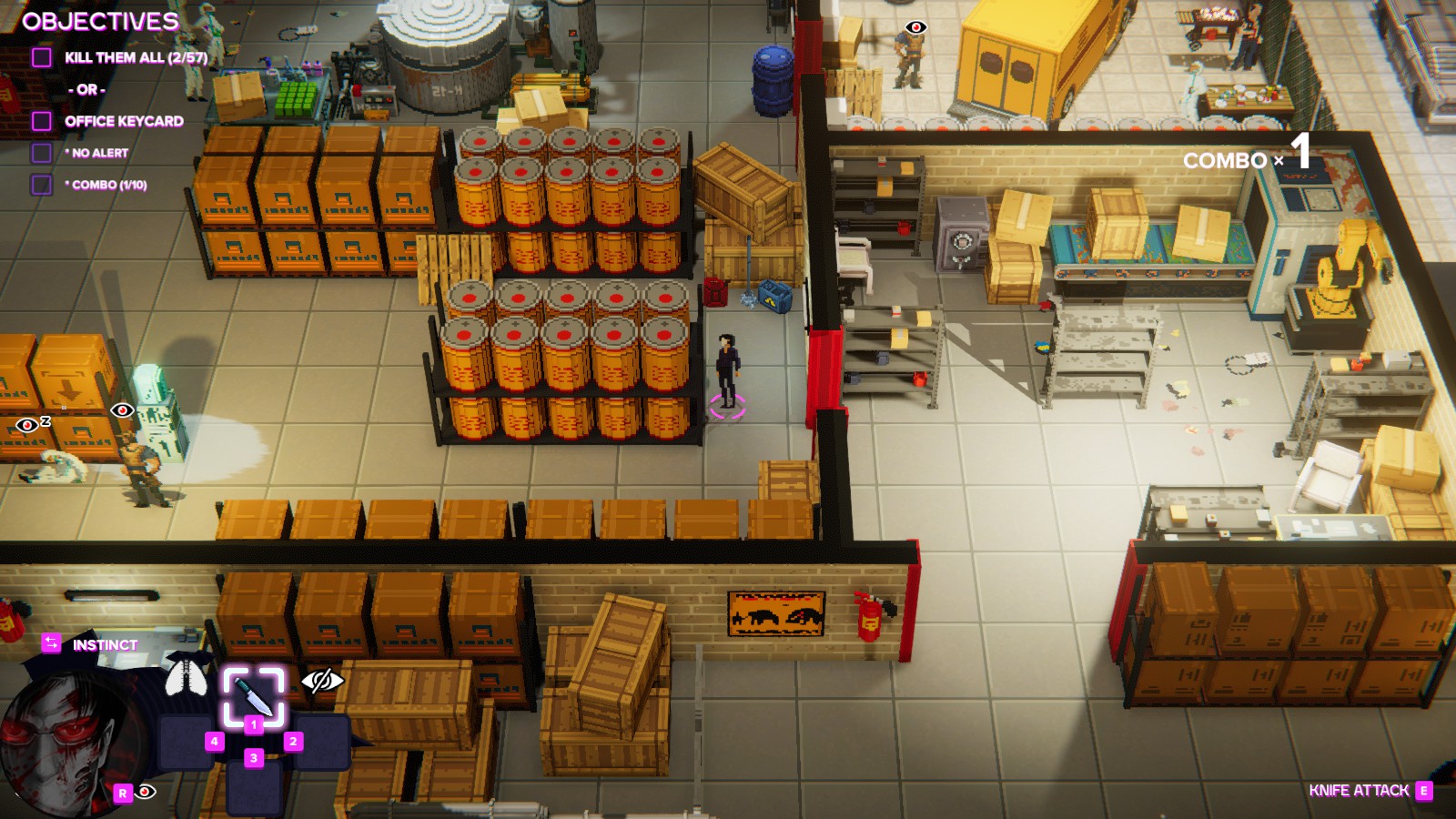 Avoiding or eliminating guards is a skill you’ll have to master by the end of the game.

One game design choice that I love is the inclusion of optional and hidden missions in each level. For the most part, you could simply focus on slaying your target or the whole party as quickly as possible. However, each level has various unique missions apart from this that can be accomplished. Some you know from the beginning, others you discover only through trial and error. In this way, Party Hard 2 pushes you to explore each level and figure out its unique quirks. Completing missions of any kind will reward you with one of four types of experience, which unlock new items and characters.

While the two default characters are essentially identical, unlocked characters offer distinctly different experiences. They not only give you different abilities and starting items, but also have their own unique complications. For instance, playing as the alien means that staying out of sight is now more critical than ever; whereas the masked Party Hard Killer can blend in easily by being discrete, one look at an alien will cause anyone to call the cops. With all these combinations of characters, items, and environment, it’s easy to personalize your playstyle. 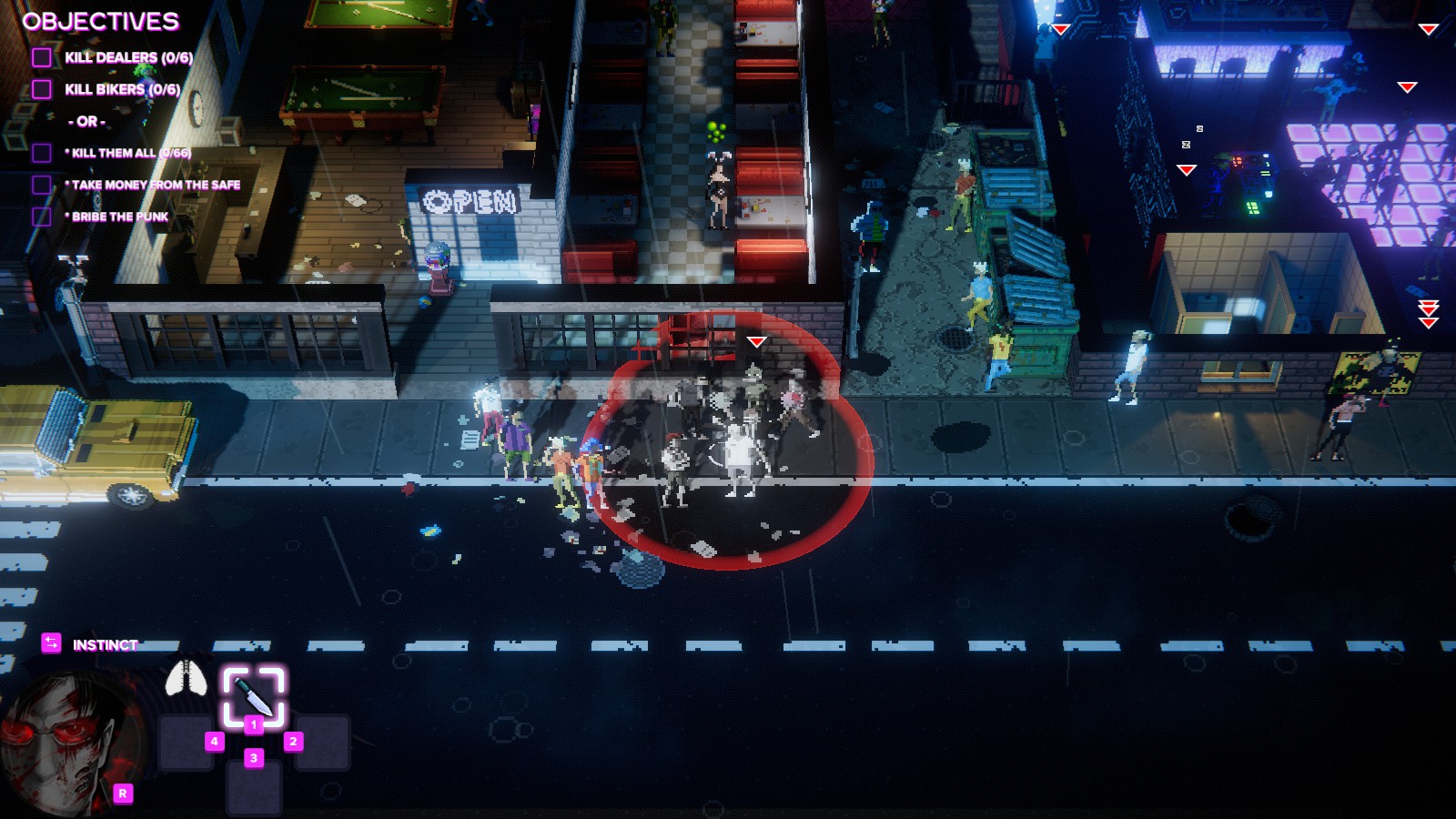 The default character’s multi-kill ability can get you out of a tight spot- or into a lot of trouble.

One thing that might surprise a player looking for mindless, dark humor fueled fun is the fact that Party Hard 2 actually features a story, and a somewhat serious one at that. Between levels, you see bits of an interview of your therapist on a talk show. At the beginning of each level, the game tells you how long before the interview each one takes place. The storytelling gets a little harder to follow in the second act, where you jump around back and forth in the timeline. For the most part though, the story is fairly engaging. It lends a sense of mounting tension and purpose to what would otherwise be a series of meaningless murder sprees. 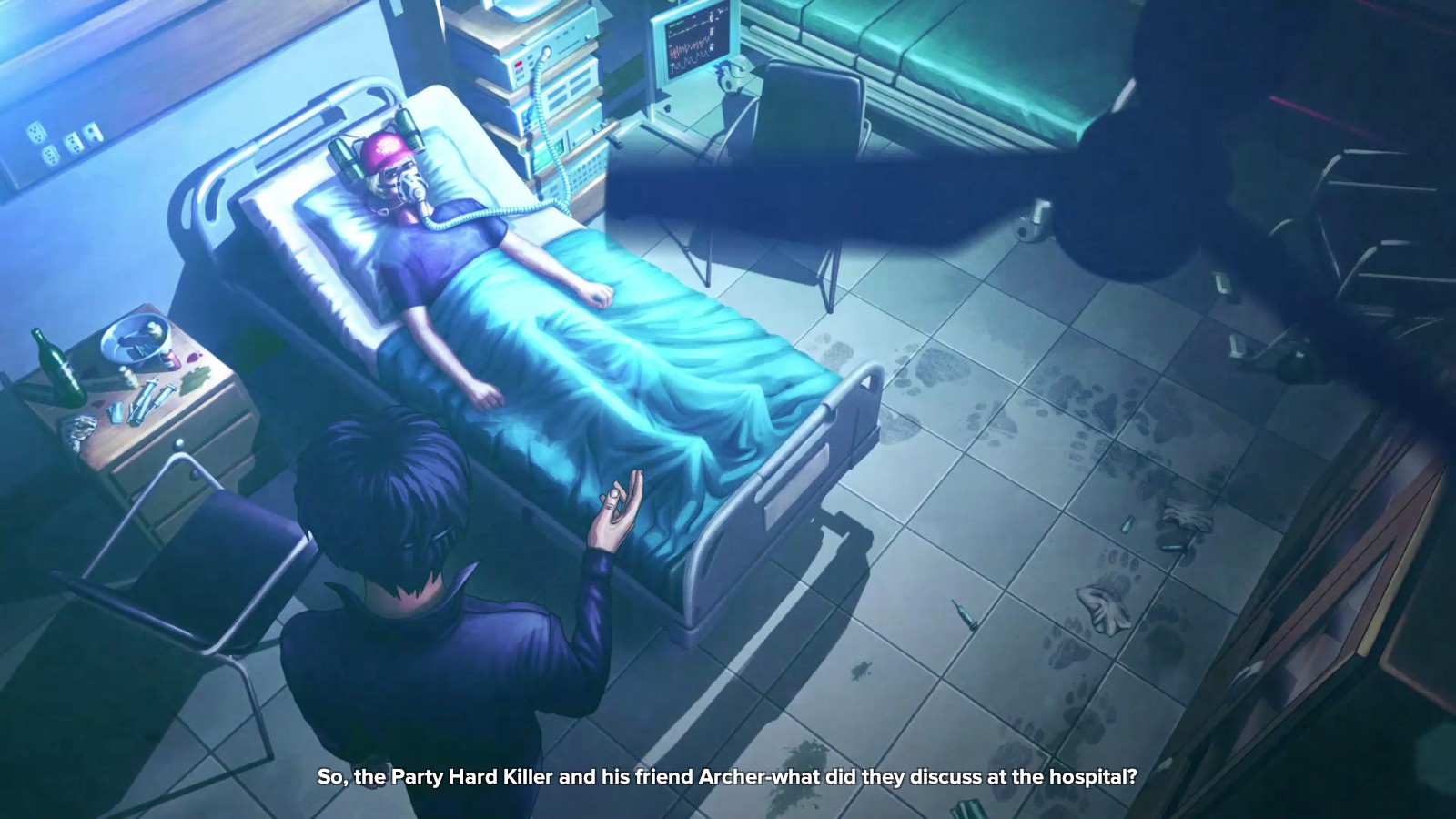 Scenes like this help to humanize what could be a very unsympathetic main character.

For all its good points however Party Hard 2 is not without flaws. And I’m not even talking about the questionable nature of the game’s moral content. There were a few minor but very noticeable glitches throughout my playthrough. Things like timers that would fail to disappear if I  restarted a level. Every now and then however, there were issues that directly impacted the gameplay. In one level, a character called the police, but they never showed up. Party Hard 2 has been receiving regular patches so it’s very possible that these issues will be sorted out by the time this review is published.

What can’t be patched out though is one very unfortunate design choice: bosses. At certain points, Party Hard 2 abandons the stealth gameplay that forms its core identity and forces you to run circles around a more substantial enemy who you simply can’t hide from. To be frank, this is an unnecessary mistake. Thankfully it only happens twice, but unsurprisingly these bosses are at climax points in the story. Taking away the chance to enjoy a sneaky massacre and being forced to play keep away while whittling down a boss’s health can take you out of the moment to say the least. 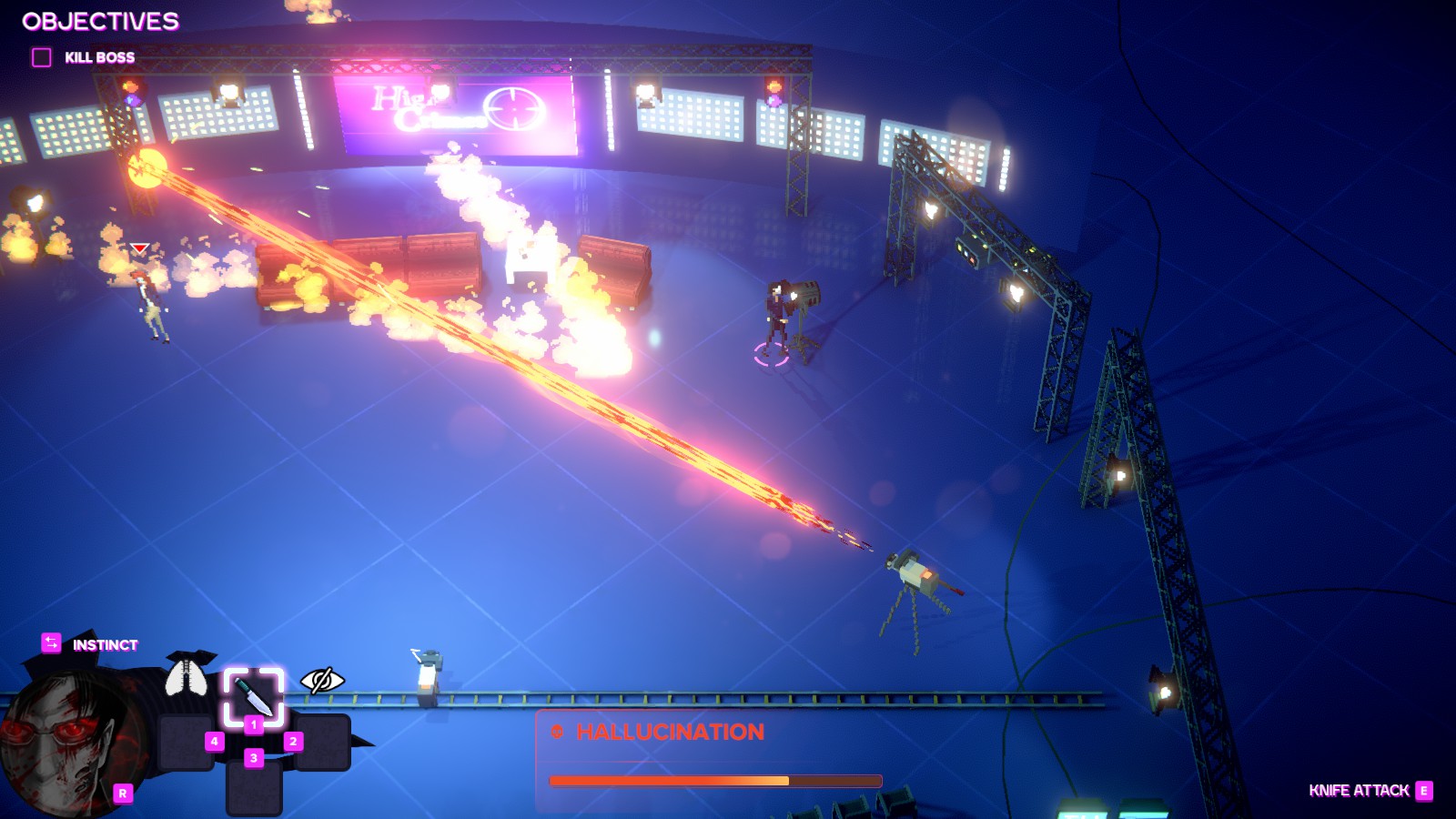 Sure it looks exciting… for the first minute.

All that being said, a few glitches and two fairly noticeable missteps shouldn’t be enough to ruin your enjoyment of the rest of the game. Overall Party Hard 2 is a good game. It rewards creative problem solving and generally makes you feel pretty awesome. Whether you want to be a relentless vigilante bringing down the scum of the underworld, or just the unstoppable bad guy from a cheesy slasher, you can enjoy yourself with this game.

While it has its flaws, Party Hard 2 is ultimately an enjoyably challenging stealth game. It provides open environments that lets you solve problems your own way, and its over the top violence and dark humor easily crosses the line into ridiculousness.