A New World that Feels Unfinished

Rating: Not Yet Rated

After being in development for six years and Early Access only 7 months, Post Human W.A.R was officially released on December 14th. The developer, Studio Chahut, originates from Grenoble, France. During its development, the game was pretty well received and drew a decent amount of attention. Now, fully released on Steam, it is being praised for its fresh, new gameplay, lack of factors left to chance, and psychological strategies. With only 21 patches made to the game, it runs seamlessly, with full animations for each character and is relatively small in size for the amount of content it packs. You can check out a complete list of news and patch notes on their Twitter account. 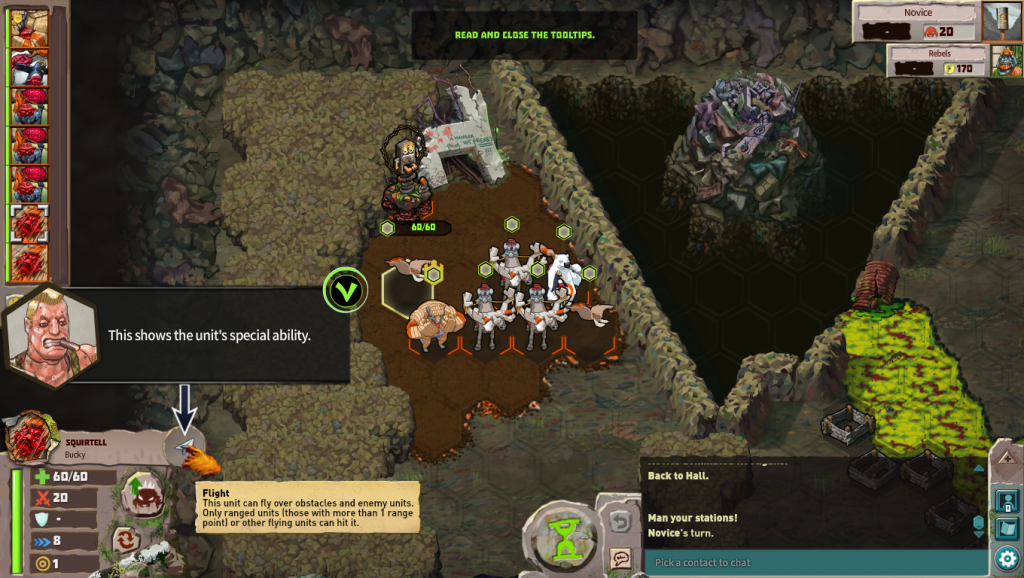 Violence: In Post Human W.A.R, the player pits creature against robot and creature against creature. When a creature is struck by a projectile or defeated in battle, splashes of blood and gore can be seen. While it is animated, some deaths are depicted in an explosion of cartoon guts.

Drug Use: During the game, one of the robots will offer the player a beer when selecting him to either move or attack. There is also some cigarette use.

Language: Words like God D**n it and S**t can be heard every now and then, but not too often. 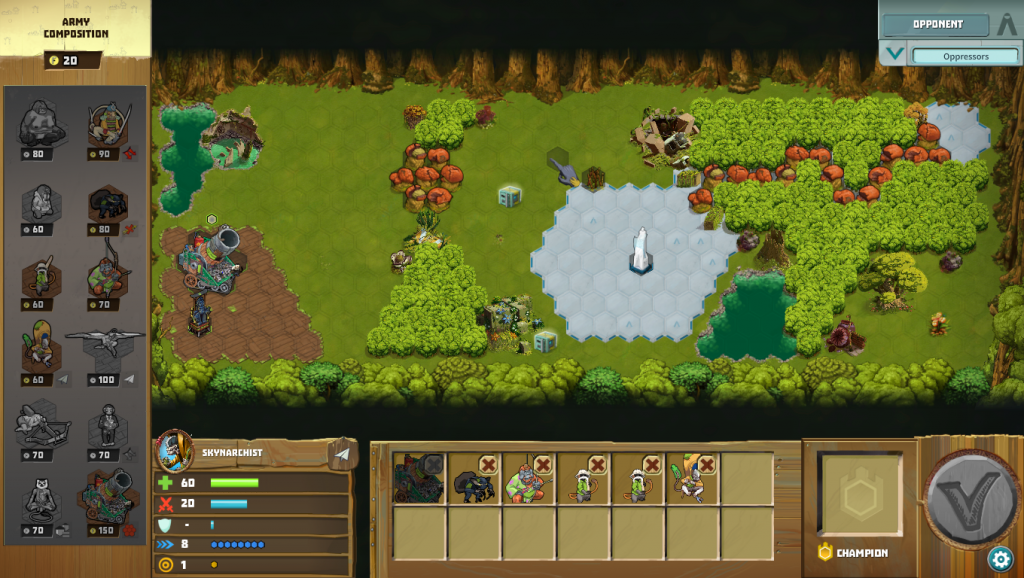 You can see the variety of troops on the left. Here, I’m controlling the Anthropists.

Despite it being a little confusing, Post Human W.A.R has one of the most original and fresh background stories I have experienced in a long time. In this universe, robots are actually good and are trying to defend their deceased overlords against the treachery and viciousness of the organisms called “stronts.” These tiny globs evolved from garbage and can control any animal they can get their claws on. Often enough, turn-based games such as this one will have some neat characters to fight with, but the campaign will be non-existent or just flat-out terrible. But W.A.R., which stands for Wraak, Anthropist, or R-Patch, does something else. The developers said that they set out to make a turn-based game with a new, fresh universe and it shows. 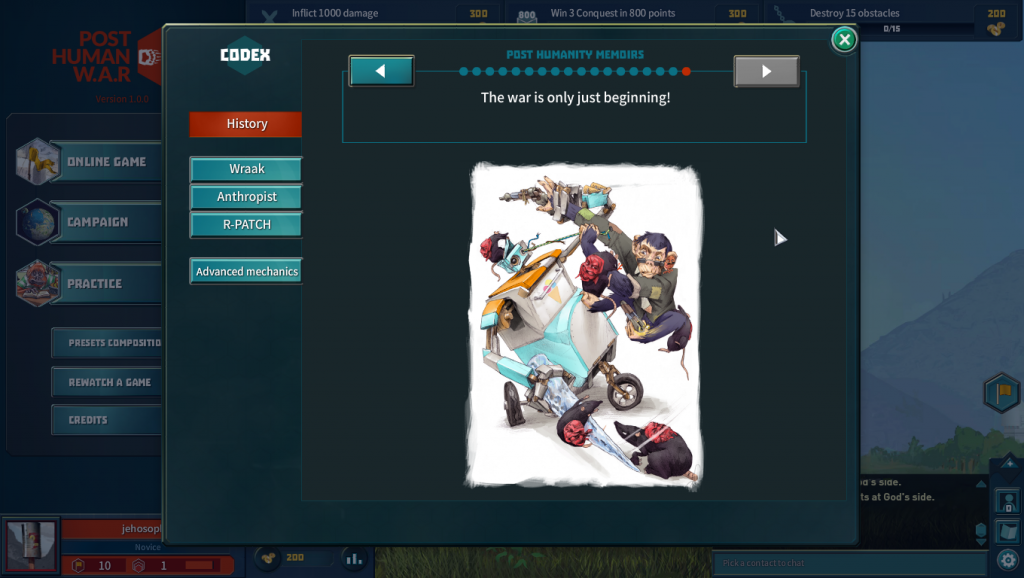 The lore is pretty neat, but I wish there was more…

Post Human W.A.R has some great mechanics in it that remind me a bit of Starcraft in terms of units you use for battle. Assuredly, there are only three real classes: the tanks, the ranged, and the melee attackers. There is nothing that really sticks out of that mold, and sometimes this can be a bit repetitive. After a while, the groups of fighters start to feel the same and like there is not much variety. Yes, the character models and animations are great, but if I want to play this game for a long time, then the fighters need more variety. 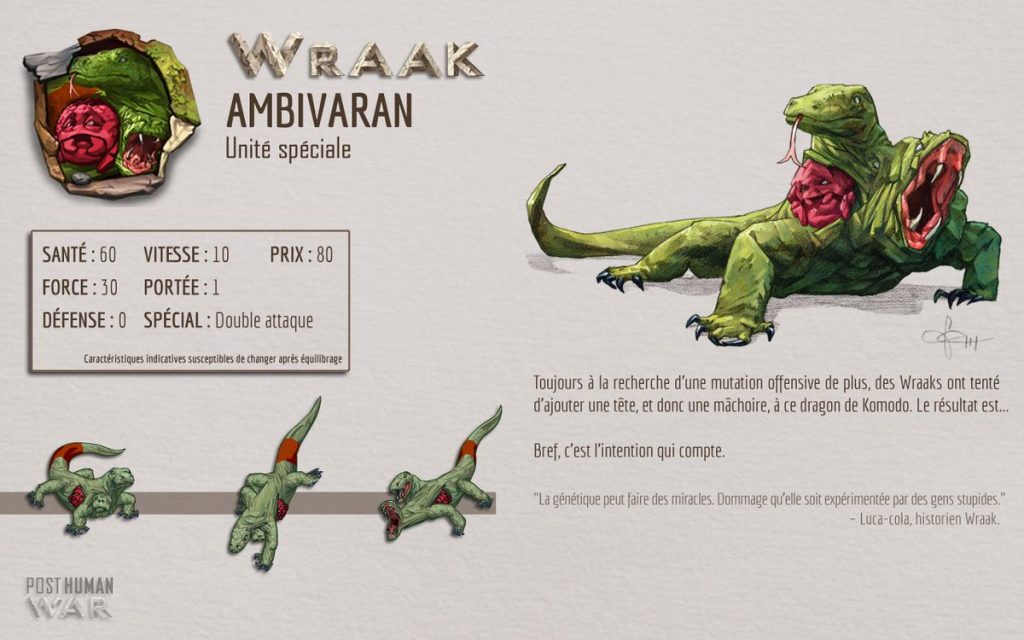 You’ll face and/or control beings like these. While it looks like a two-headed lizard, it’s the pink glob on its neck that is controlling it.

Compared to other games like Starcraft or even League of Legends, the maps are tiny. They remind me of the small maps in games such as Fire Emblem or Final Fantasy Tactics. I felt that they could have been bigger, with more room to move around. Sure, there is enough room to fight in, but I still felt cramped at times. If Studio Chahut were to change one thing in this aspect of the game, I would ask for larger maps. It’s understandable that they’re kept small though, since troops can’t move too far and movement is tile-based.

With any game, there comes variety. In Starcraft, you have the ability to control troops that fly, troops that can protect others, or even other troops that can transport other more important units. In Fire Emblem, you have a different characters who fight according to their personality as they’re story-driven. While I would agree that there is slight variety in W.A.R, there are only three options I have to choose from: tanks, ranged, and melee fighters. There are also flying enemies, but those can only attack like a melee fighter. Yes, it’s a fun and ingenious system, but it seems over-simplified and basic—a game for beginners. 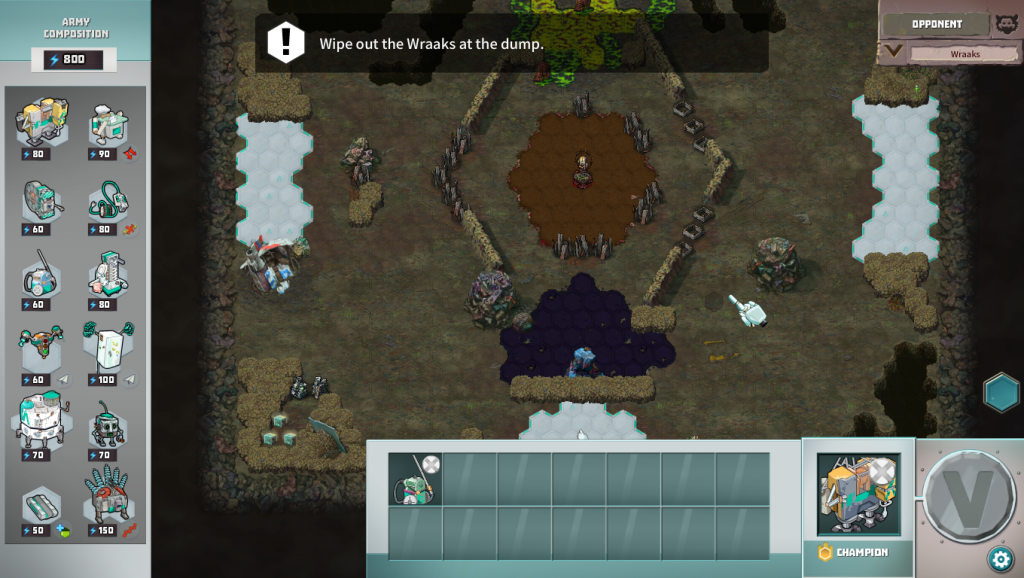 Here, I’m controlling the robot race, R-Patch. The units are on the left.

Branching from that topic, I also want to mention the fact that sometimes the units feel flat-out recycled in other factions. For example, each set of characters has a tank. The robots have a giant washing machine robot, the Anthropists have a giant cannon that moves ever-so-slowly, and the Wraak have a very large mountain goat (there are more tanks, but for sake of discussion, I chose these three). While they all have slightly different functions, in the end, they just feel similar. This seems to be consistent across the factions and their units.

Having said all of that, W.A.R deserves praise for its originality and appeal. The robots all were previously household bots programmed to do chores, but now they have all been programmed for military purposes. The Wraak are all random animals, such as a koala riding a deer or a polar bear that uses a penguin as its weapon. The Anthropists are all monkeys, like a ninja primate or a baboon with a bow and arrow. And they all have little catch phrases they say when selecting them or when they attack. The amount of detail that was put in for the character and charm in the game is commendable. I’d be lying if I said I didn’t laugh when I heard joke references to Jurassic Park or Monty Python. 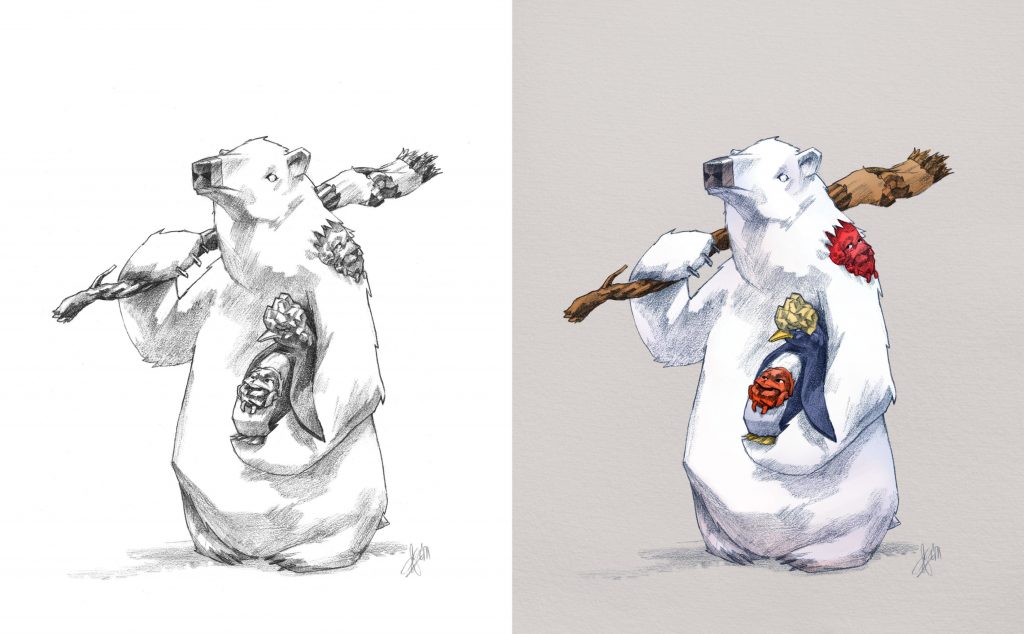 Another animal being controlled by a Stront. I love the character models.

Finally, online play is good, but can often feel lengthy since it’s turn based and you have to wait for your opponent. While did take a bit to find an opponent, once I was in an online match, it was exactly like any campaign match. For the most part however, it’s smooth.

The graphics add to the overall flow of everything. Not once did I see some sort of glitch or frame-skipping. Granted, there isn’t an excessive amount of animation, but W.A.R. still looks crystal clear and the cartoon-like details are great. Studio Chahut created some funky, quirky characters with great art and character models. 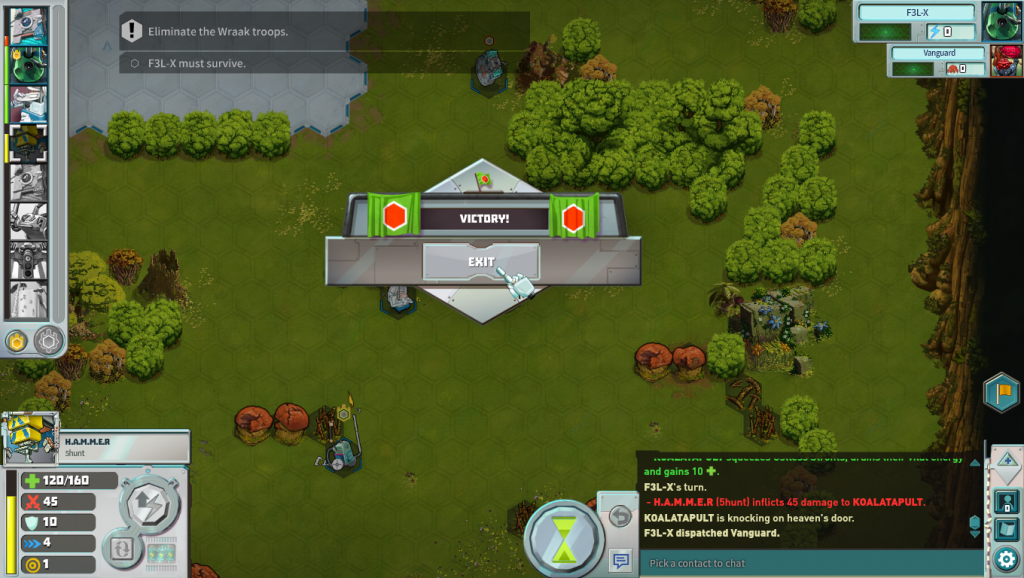 Victory comes when you either defeat the faction’s champion or defeat all of their troops.

Post Human W.A.R is ambitious in that it created an original, fresh new world and a curious background as to why these animals and robots are fighting one another. While there isn’t a broad choice of troops for each faction, the attention to detail is great and makes it all the more fun. Even though it’s not on par with  more popular turn based strategy games like Fire Emblem, W.A.R brings something new to the table, with a new world of characters and personalities. At a cheap price of $14.99, it’s absolutely worth it, if even just to play every once in a while. Actually, it’s on sale right now for $10.49 – a steal!

Although Post Human W.A.R feels small and incomplete, what we were given is good and worth spending the time and money.