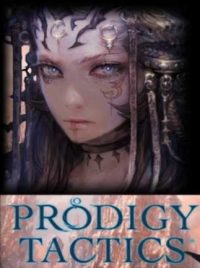 When we think of turn-based combat, usually it is involved with some kind of JRPG that takes almost one hundred hours to finish. There is also the more strategic approach, such as with Fire Emblem or Final Fantasy Tactics. Many people have various preferences on their favorite kinds of combat mechanics. Though, you will likely fall into one of these two camps if you’re reading this review. Prodigy Tactics is a competitive turn-based strategy game with a unique background behind the development.

Prodigy Tactics was originally intended to be a game simply titled “Prodigy”. It had the same characters, lore, and combat mechanics and wasn’t played with a keyboard and mouse. Figurines and cards were meant to be played with on a digital board with NFC technology, which looked rather unique as a bridge between Tabletop games and video games alike. Prodigy Tactics seems to be the result of failure to meet the needed funds for production and everything else involved to get it made—and the Kickstarter backers are not happy about this transition. Does it hold up as a full-fledged video game instead of its original destiny?

Spiritual Content: The world of Prodigy Tactics runs on Mana, a depleting resource that the heroes are fighting to defend. Many of the characters use offensive and defensive magical abilities in battle and can heal themselves. Attacks and abilities are performed by using either of the two energy sources called Harmony and Dissonance. These are magical circles that appear on the field when characters utilize these sources of energy. Players will notice that many fantastical creatures are present within the game as well.

Violence: Attacks are done through the turn-based nature of the combat. Characters will utilize various weapons such as swords and bows, to attack one another. There is no blood, but these moments are accompanied by cries of pain and special effects that depict a slash, cut, or shot. There are creatures present that don’t use weapons and will slash at enemies.

Sexual Content: A few of the female characters wear low cut tops that reveal some cleavage. 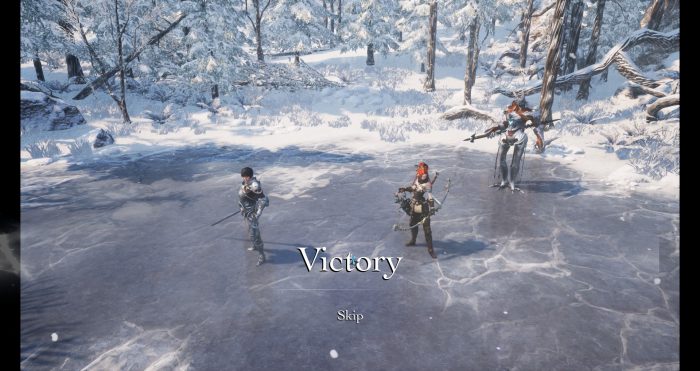 Even before I did the research and learned how much this property has been through, Prodigy Tactics didn’t turn out to be what I  had hoped. On the surface, it does have a great presentation. I’ve never seen a video game that thrives on turn-based combat look this good. When I think of the combat style, JRPGs come to mind. They usually have some anime or cell-shaded aesthetic that we have seen more than a dozen times. Prodigy Tactics leans very close to a triple ‘A’ title like Dragon Age or something very similar. I was impressed by the details in the characters and environments. The soundtrack is well-crafted and feels akin to the higher budget fantasy titles. 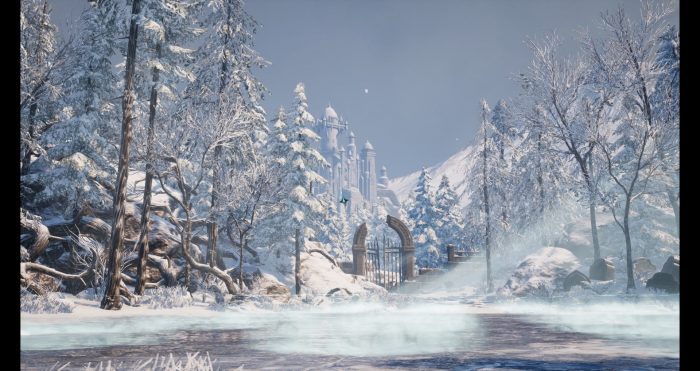 A better look at the frozen forest landscape.

The visuals are a huge plus for a game like this, but it was the combat that hooked me in and enticed me to keep going. The gameplay is more than basic turn-based combat and takes a competitive angle similar to the digital card games that are currently very popular. There is no travel or open world in any gameplay modes. Due to its roots, Prodigy Tactics feels very much like the digital tabletop game that it was intended to be, and includes some entertaining gameplay mechanics.

Prodigy Tactics is not just about taking turns and hitting one another. There is no real way to label it, but the game operates on the use of two forces of power called “Harmony” and “Dissonance”—dark and light energies. During both attack and defense phases, using a Dissonance action may produce better results but creates circles on the battlefield. These dissonance circles have a better chance at doing damage to your team as their amount increases with each action, which is why Harmony actions exist. Harmony actions offer fairly standard results, but using them creates harmony circles and should be used to balance out the Dissonance. The hook of the gameplay is about balancing these energies enough to where you can utilize the benefits of Dissonance as Harmony must be used to contain those negative effects. 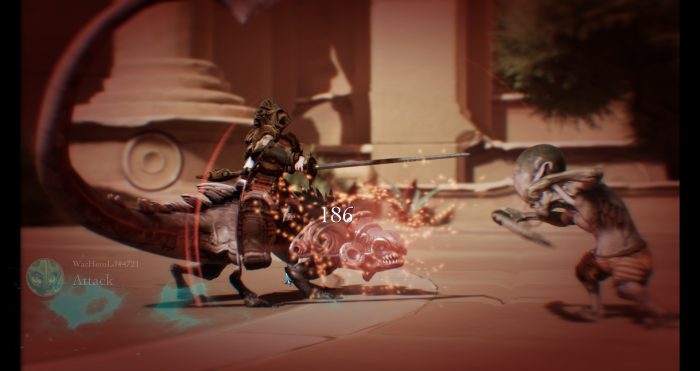 The attack animations are fun to watch.

During your turn, there is a list of actions to take. Using one of them in the Attack phase offers a range of damage or special ability upon certain conditions. The strategy of using Harmony and Dissonance in the defense phase is the most creative. When defending against an enemy you can use Harmony to block the attack while Dissonance is used to counter. The interesting factor of the counterattack is that your character’s defenses are left open when you choose that option. Having to utilize defense properly along with balancing the two forces creates a deep level of tactics and kept me on the edge of my seat during an entire battle.

Strategy goes even deeper when you start to learn the abilities of each character and the required conditions to activate them. One of the characters has an ability in which she can attack any enemy on the field even if they are not in her line of sight. Some characters have skills that can also increase their defense or attack power. It is up to players to find their favorite combination of heroes and learn how they all work together to achieve victory. Characters also fall into special subcategories that add even more depth to consider as players develop their own unique play style. 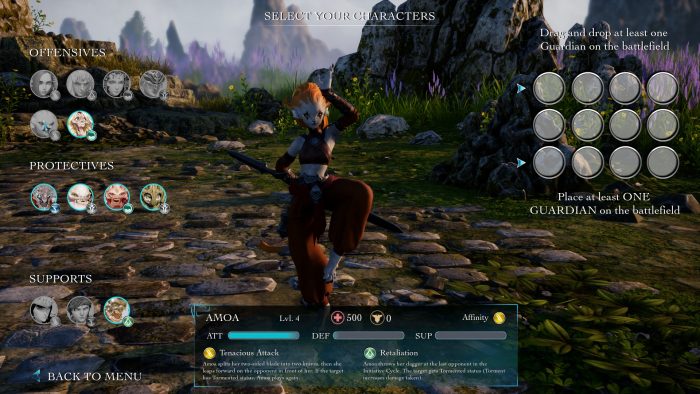 In all modes except for the story, you are given all characters and can use up to five.

To touch on the story in Prodigy Tactics, the basic premise is that the world of Thasys is near its end, and nearly every source of Mana is tapped out. A group of heroes called Watchers and Guardians is all that is left to defend the world. We get to see the first moments of this story which is centered around the character Elae, who has been in slumber for hundreds of years. The story mode is where I kept experiencing game crashes, so I could not experience it at my leisure. The format seems as though they will add more story chapters centered around other characters. This is a world I would like to learn more about, but at this current time I cannot do so. I’ve even reached out in the Steam discussion board and had no response on the issue.

What parts of the story I did get to see were conversations carried out between characters in text. Their portraits were the reused assets of character models staring down one another just like they do at the beginning of each turn in a battle. Every chapter seemed to have a short story explanation before I started it, conversation, then a battle scenario that must be completed. The written story and dialogue was engaging, but the way the story was presented was half-baked. The game usually crashes when I attempted to go into the story mode, but at one point I was able to experience it for about twenty to thirty minutes before it decided to crash on me again. 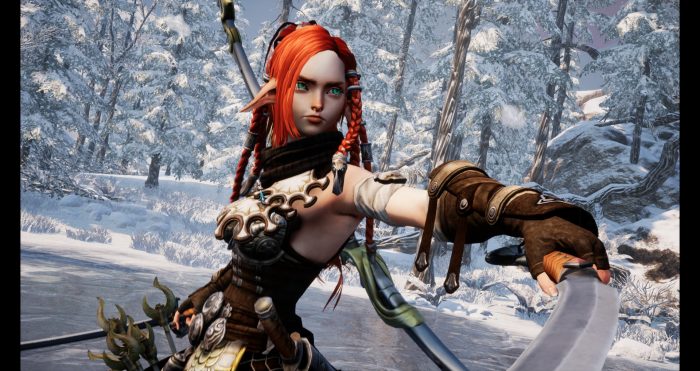 Eale, the focus of the first story chapter.

The other modes of gameplay that the game has to offer are tutorial, training, single-player, and multiplayer. The tutorial offers a well written guide on how to play the game and the various mechanics that are involved. Single-player includes the story mode and another mode called Bastion, which is a survival mode where you take on waves of enemy goblins and other creatures until you are defeated. Bastion is the mode where I spent most of my time with the game and I enjoyed to see how long I could go with my five selected heroes. Multiplayer includes online capabilities, but I haven’t had the chance to experience any of it since I could not find a match. I did read somewhere that there was a community Discord server, but my ideal online community is one in which I should be able to find within a few minutes at most.

The strong presentation that Prodigy Tactics comes with does not save this game when there are technical issues and very little content. There are only thirteen characters available at the moment, though there are plans for more. The fun ran out for me when I saw what these characters could do. Without the option of playing the story mode or playing against anyone online there was nothing left for me to experience. Seeing the trailer had me excited for the game and I enjoyed my first handful of hours very much, but it is hard to give a game that much of my time when it doesn’t have enough to keep me engaged in the first place. Prodigy Tactics had true potential, and let me down even before I knew the history behind its development. This game has recently left Early Access, when clearly it should not have.

On the surface, Prodigy Tactics boasts a high quality presentation and entertaining gameplay. Unfortunately, it suffers from technical issues and doesn't offer very much for players to do. Having just been brought out of Early Access, it should have stayed a little longer.