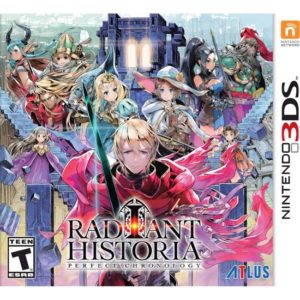 In retrospect, 2018 has been a year of JRPGs going back to their roots. Octopath Traveler tried a modern take on old-school graphics, while Dragon Quest XI went for the biggest, best version of doing the same thing Dragon Quest has always done. Earlier in the year, though, Atlus quietly contributed to the ailing 3DS with an updated version of the DS RPG, Radiant Historia. With quite a few changes in this update, including new story content and a new ending, is Radiant Historia: Perfect Chronology worth your time? Let’s find out.

Violence: The plot of Radiant Historia is centered around an ongoing war, so the game is violent, but we are talking about SNES-level graphics. There is no gore or blood. Even when an art still shot shows two corpses, they just look like two people lying on the ground.

Sexuality: Another still shot later on shows a main female character in a state of undress, with only a small bra covering her upper body. It’s a moment played for amusement and is complete fan service. This is one brief moment over the course of the entire game. The Satyros characters show their midriffs, but not in much of a sexual manner. I have not played any of the DLC, but it is abundantly clear that the “Bathing in Mana” episode is meant as further fan service.

Language: There are 1-2 cuss words on average in each dialogue scene; no “F” bombs.

Spirituality: Like many other JRPGs, bad guys manipulate the (generic) church and the faith of the people for their own gain.

In many ways, Radiant Historia is a classic SNES-era Japanese role-playing game (JRPG) akin to Final Fantasy VI or more specifically, Chrono Trigger. Its graphics, for the most part, aren’t much above SNES-level quality. Players work through a fairly linear story while buying items and equipment upgrades. They battle random enemies in preparation for boss fights, using a turn-based combat system. Fights are not “random encounters” in the sense that they do not come upon you suddenly; players can see enemies in the overworld and choose to engage them or try to avoid them, as in Chrono Trigger. However, the biggest reason for that inevitable, unavoidable comparison is Radiant Historia’s focus on time travel. 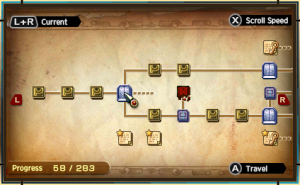 The in-game tool to manage all that time travel.

Radiant Historia has players bouncing between two main timelines instead of one, with each parallel universe influencing the other. Metaphysical accuracy aside, this is a fantastic mechanism that sets Radiant Historia apart from nearly every other JRPG. It’s only a good idea because it’s executed so well. The game has an extremely meticulous system that guides you through the branching timelines, keeping track of what events happened when and where. This makes it incredibly easy to teleport between different points in time and space, and without that careful support the game would be incredibly frustrating to play. Instead, players can focus on navigating the story.

The story is still linear in the sense that there’s only one real progression: you will eventually get stuck in each timeline, and then have to circle back to the other for some kind of guidance to proceed—the game does have tons of side quests and multiple endings. The voice acting, writing, and characterization are all very strong, and it’s an enjoyable story where the villains actually make sense, a JRPG rarity. I do wish the main character, Stocke, had more personality, however. 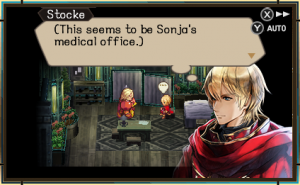 Time travel requires you to mind your surroundings.

With this new version of Radiant Historia, subtitled Perfect Chronology, two big additions have been made to let players focus more on the story and side quests. The first is a plethora of new story content, the second is a friendly mode for combat. There is also a new dungeon challenge area, but I did not use it much at all.

The new story content primarily involves a new mode that runs parallel to the rest of the game, where the main character, Stocke, runs briefly through a bunch of side quests in “Potential History” instead of the two main timelines – “Standard History” and “Alternate History”. These quests are entirely optional, but they give fun glimpses into completely different versions of the game world, and completing all of them allows you to go past the game’s original “okay” ending and even the original “true ending”, to the new “truest” ending. Most of these quests involve some kind of detective work: you have to go back and find a place and time where something relevant to your current situation has happened. As someone who almost never goes for 100% in a game and will often just search on YouTube for the best ending if I get a bad one, I have to say that I enjoyed this material enough that I went through the work to get the final ending. 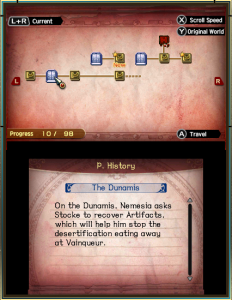 Aside: At the beginning of the game, it asks you if you want to play the new content all at the end of the original campaign which is called “Append Mode,” suggested for newcomers, or have it spread throughout in “Perfect Mode,” suggested for veterans. Their recommendation seems backwards to me. I played in “Perfect Mode” as a newcomer, and though the new content was easily differentiated from the old, I still think it fit the setting and idea of the game very well and was glad to play through it all together.

Part of the reason I spent the time grinding through the side quests was because of Radiant Historia’s friendly mode. In friendly mode, combat is way easier, but you can also skip random encounters entirely—really skip them. In Bravely Default and Bravely Second, you could just turn encounters off. Here in friendly mode, you can actually just push the “Y” button to swing at enemies in the overworld, and you immediately defeat them. You get experience points, level up, the whole shebang, without taking a hit or actually doing any work. It’s…great! I think! I’m incredibly torn about this.

On one hand, grinding is never why I’ve played JRPGs. I primarily play for the stories, exploration, and character moments. So, I was quite happy to be able to skip all of the random encounters, and I’ve felt spoiled since. For example, in Dragon Quest XI, you can put fights on auto-pilot, but you still have to sit there and watch while the game, well, plays itself. I remember mentally screaming at my TV, “Why can’t you be more like Radiant Historia!?” 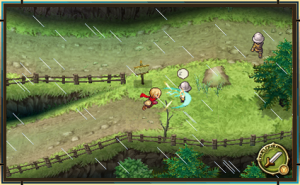 This soldiers’ weakness is… Friendly Mode and the Y button.

However, friendly mode has a variety of problems. First, once you choose the mode, you can’t undo it. Why? We may never know. Second, while you still have to play through story (i.e. boss) fights, they are incredibly easy. Some attacks from the final boss did 4-10 damage when I had 1,000 hit points. I’m not even sure why I kept upgrading my weapons and armor. Unfortunately, the ridiculously low difficulty level is fully intertwined with friendly mode. And the worst problem is that while this mode makes a lot of sense in games with boring or archaic combat, Radiant Historia’s battle system is actually fantastic!

Two key innovations set Radiant Historia’s combat apart. Enemies are on a 3×3 grid, and players can knock enemies around the grid to group them together so that they can all be attacked at once. Additionally, several special attacks and spells hit enemies in certain areas of the grid. The other innovation is turn order manipulation. Combat is completely turn-based, but you can see about 15 turns ahead of who is going when (both enemies and allies), and you can have players swap positions in turn order, though this makes them vulnerable. Setting up the same epic attack 4 times in a row, killing enemies just before they would attack, is incredibly satisfying. 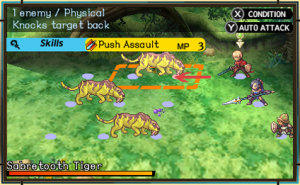 So, friendly mode is great, but could be better. I really wish I could just toggle “swipe at enemies in the overworld to auto-kill them”, while still having boss fights that were actually challenging. That being said, the excellent combat system means that you can play Radiant Historia normally and still experience a fantastic RPG, or you can play it nearly like a visual novel with very little consideration for combat, and still experience a fantastic RPG. It’s a testament to the game’s storytelling that it still works so well in friendly mode; tactical RPGs that depend on combat gameplay for their appeal would not fare so well. The game still took about 25 hours for me to get to the “truest” ending in friendly mode, and I didn’t do that many sidequests other than what was required. That’s plenty of bang for my buck; at some point “100+ hours of gameplay!” means diminishing returns.

In the end, these new features were added on top of a game that already had a stellar reputation and for good reason. The writing, the story, the combat, nearly everything about Radiant Historia is top-notch. The graphics are dated now, and I wish Stocke had more personality. Some might complain about the lack of 3D—I own a 2DSXL and didn’t even notice. But in the end, those complaints are incredibly minor. Radiant Historia is a timeless classic, as shown by its relevance nearly a decade after its original release. Perfect Chronology deserves to be mentioned in the same breaths as Dragon Quest XI and Octopath Traveler as one of 2018’s best JRPGs.

I now know why Radiant Historia is on so many "Best JRPGs of All Time" lists. It's a true classic, and Perfect Chronology has only made it better. Before you say goodbye to your 3DS, make sure you play this one.