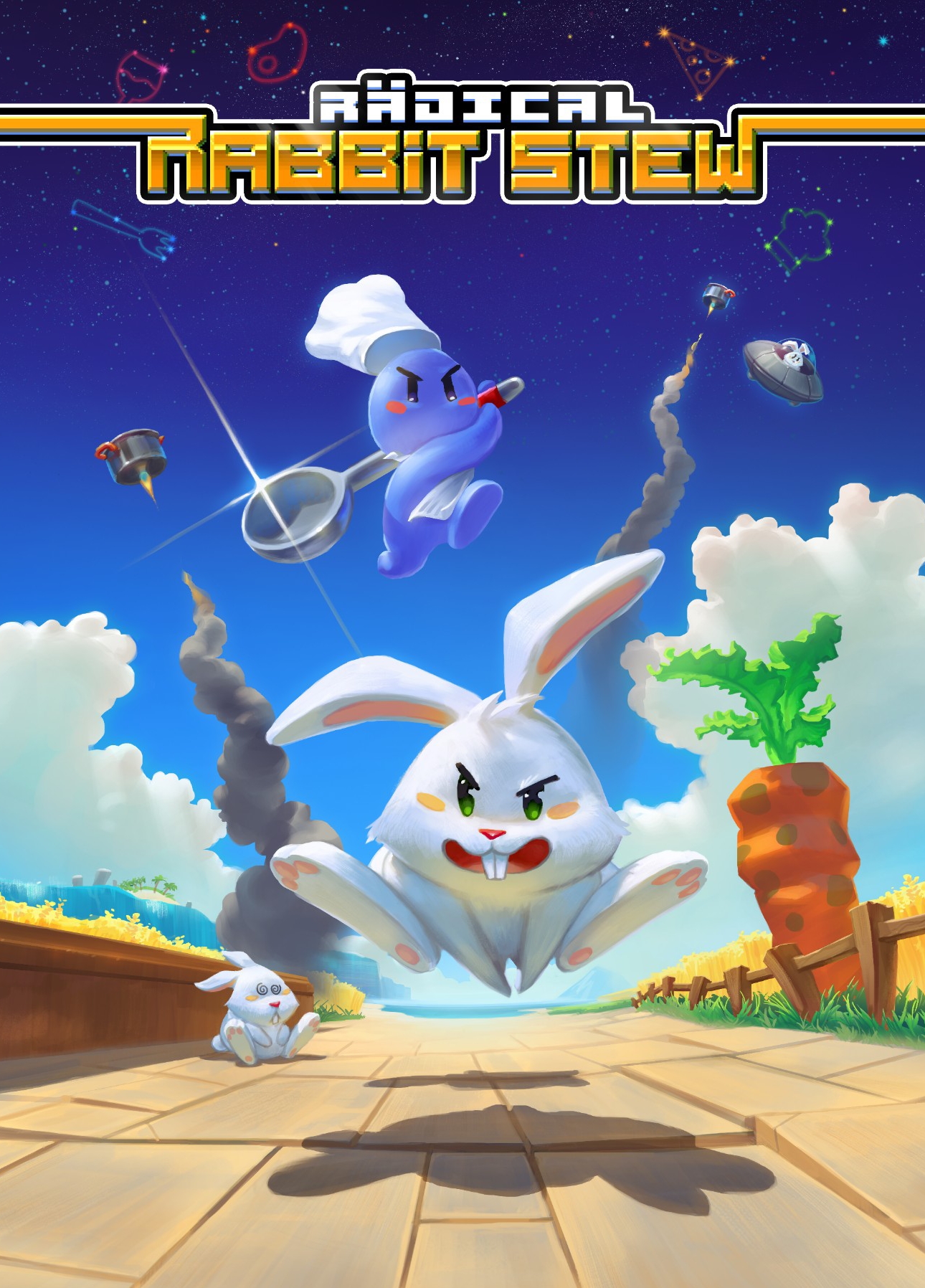 In an age where games either aim for hyper-realism or flat-out absurdity, I tend to lean more toward the latter. I do enjoy an occasional session of something like Uncharted, but for the most part I typically prefer wild, wacky, and arguably more childish experiences (and yes, in case you were wondering, I was primarily raised on Nintendo systems). That’s why, when Radical Rabbit Stew came across my radar, I knew I at least had to give it a shot. And boy, did I get exactly what I asked for.

Violence: The game’s violence is all slapstick, but you will be whacking cute little bunnies around with a large spoon. Certain rabbits explode after a bit, and rabbits chomp on you when they take your last bit of health. Pirate ships shoot bombs at you, and various enemies seek to squash and smoosh you however they can.

Other negative elements: One of the worlds is horror-themed, with zombie rabbits and ghosts haunting the area. One of the bosses takes some diabolical inspiration, with a lava-themed arena and disturbing facial distortions, which some younger players could find frightening. 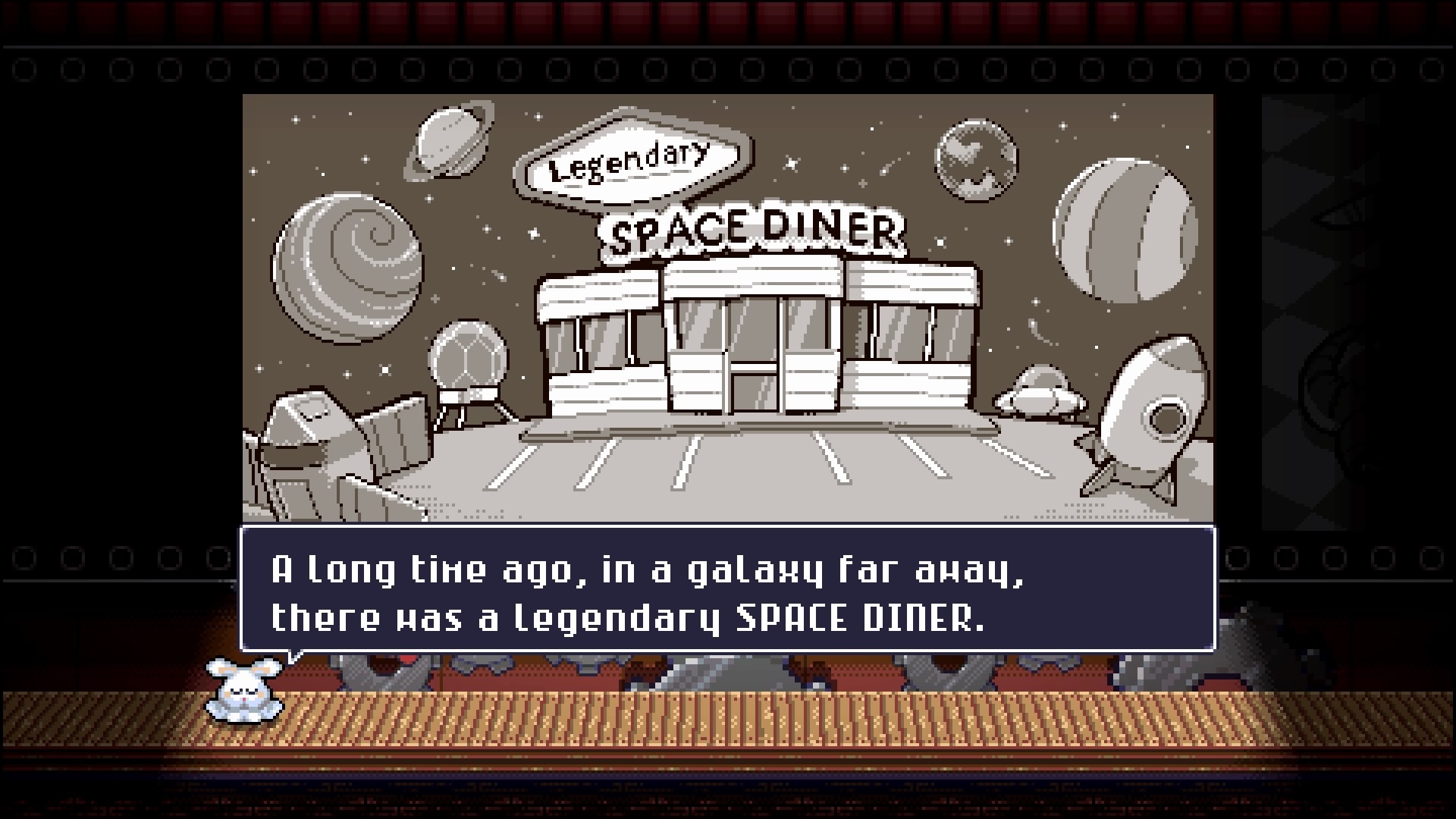 After finishing Radical Rabbit Stew, I’m still left wondering exactly how to classify it. The game contains tags for both action and puzzle games on Steam, and it indeed carries elements of both, but not cleanly. This makes for an experience that is hard to classify but is nonetheless some of the most fun I’ve had in a while.

The main goal of Radical Rabbit Stew is to clear each map of the titular rabbits, who have kidnapped your friends from the Space Diner. You do this by knocking the rascally rodents into convenient pots of—you guessed it—stew that are scattered throughout the levels. You’ll be flinging rabbits off of ice blocks, into cannons, around corners, and even using their explosive properties to your advantage to accomplish your goals. Every level’s got some new twist on the gameplay, meaning that you can’t get comfortable for long. 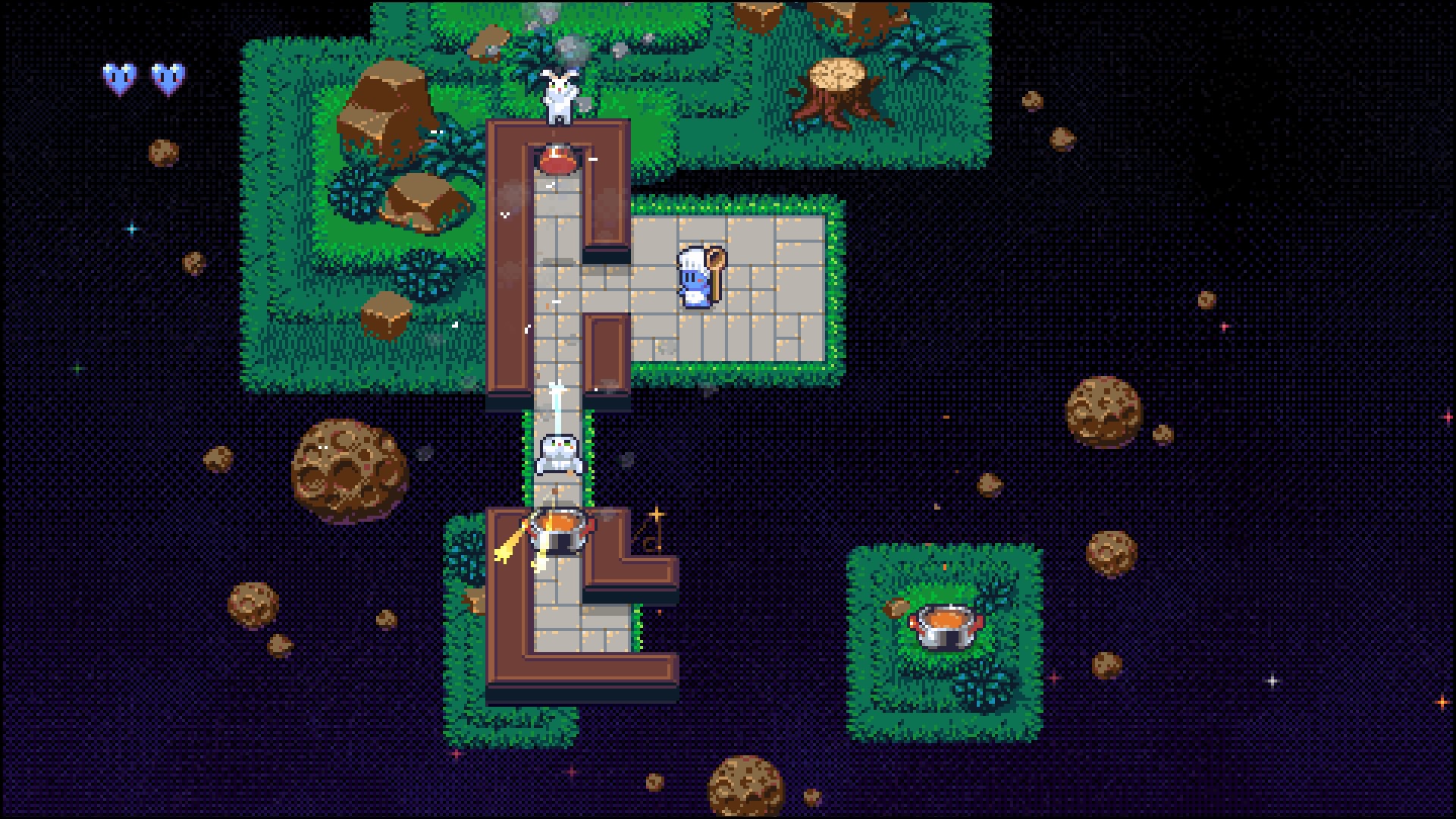 As you play, you’re equipped with different spoons that can accomplish different tasks. Your basic wooden spoon works to quickly fling the average bunny, but won’t work on larger foes. The silverspoon takes a bit longer to charge, but can slam larger rabbits out of the way, as well as launch you off of springs to reach otherwise inaccessible areas. The grapple arm lets you snatch rabbits across large gaps, and the bomb scoop gives you unlimited destructive capabilities to use at your discretion.

I generally enjoy puzzle games, but a common complaint I have is that, if they’re not careful, puzzle games can eventually begin to feel samey. Every level you’ll be accomplishing the same goal, and while some games switch up their mechanics, many don’t, or at least don’t do it well enough to make any meaningful difference. As a result, you end up playing what feels like variations on the same level for upwards of two to three hours. 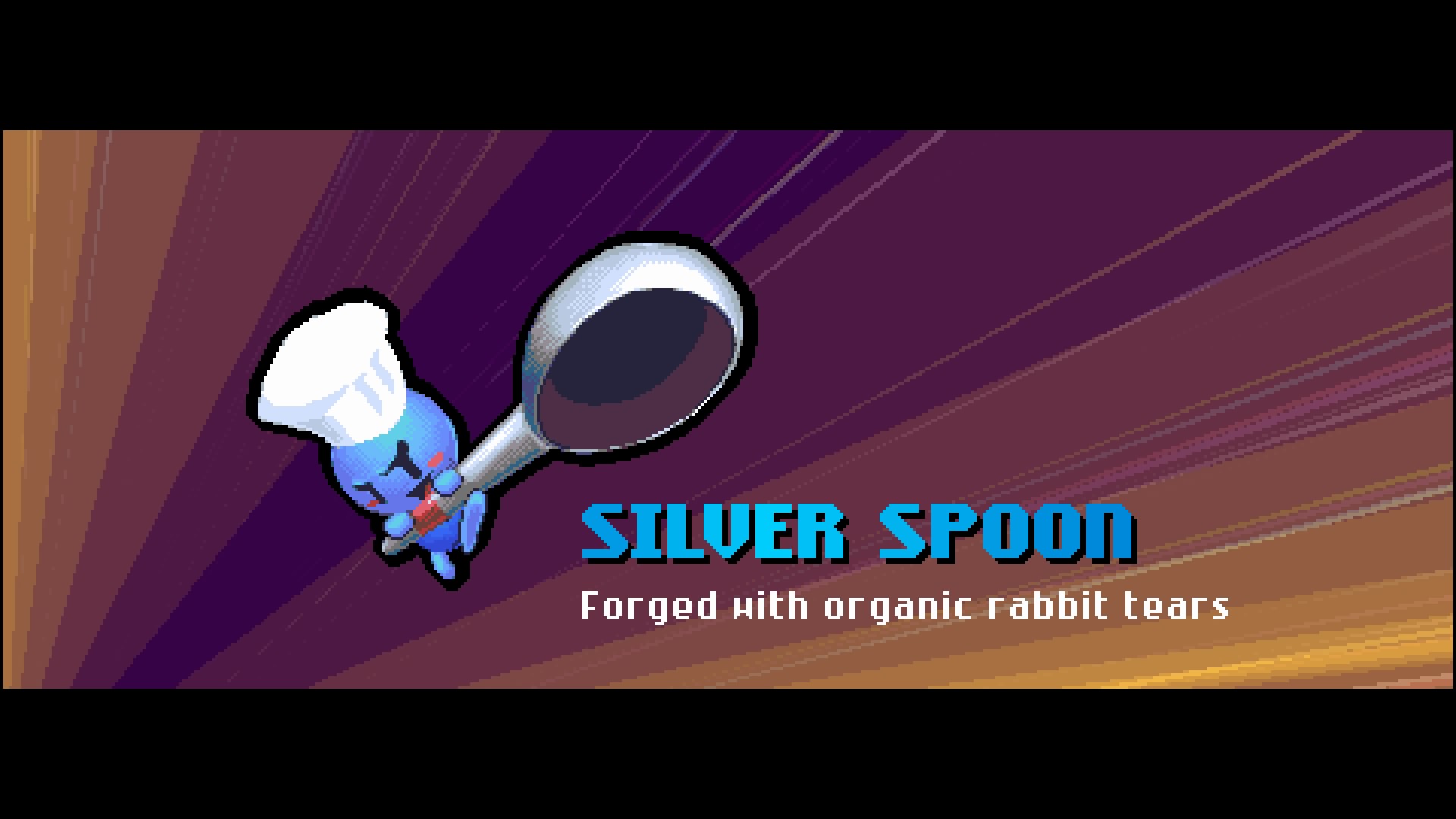 Radical Rabbit Stew addresses this tendency in a peculiar way: by stubbornly refusing to neatly fit into any sort of classification. Some levels are explicitly puzzle-based. The rabbits don’t move much, and there’s not much danger to your character, so you can take the time to think out your moves and plan the best way to rocket those rabbits into their cauldrons. But don’t get comfy; the next level may very well be more action-oriented, with bombs and extra rabbits raining down in all directions around you, meaning that you can’t just sit back and think; you’ve got to run if you’re going to make it out in one piece. This was an excellent move. Each level doesn’t just require a unique strategy, but an entirely different philosophy on playing. Many levels even strike a balance between puzzle and action, meaning that you can approach them however you’d like. It keeps what could easily have become a stale experience fresh level after level.

In addition to your main goal, most levels contain one to three extra blue coins which, if you manage to collect them all by the end of the game, unlock some special extras. These coins generally take more creative problem-solving to collect. Some of them legitimately stumped me, and I even had to look up a guide for one. But, crucially, they never felt unfair. Whenever I figured out the key to finding that last coin, the solution made sense, and it generally boiled down to me forgetting one of my abilities that easily solved the problem. True, it really is just a little extra padding, but I like collecting things and it was fun and satisfying, so sue me. 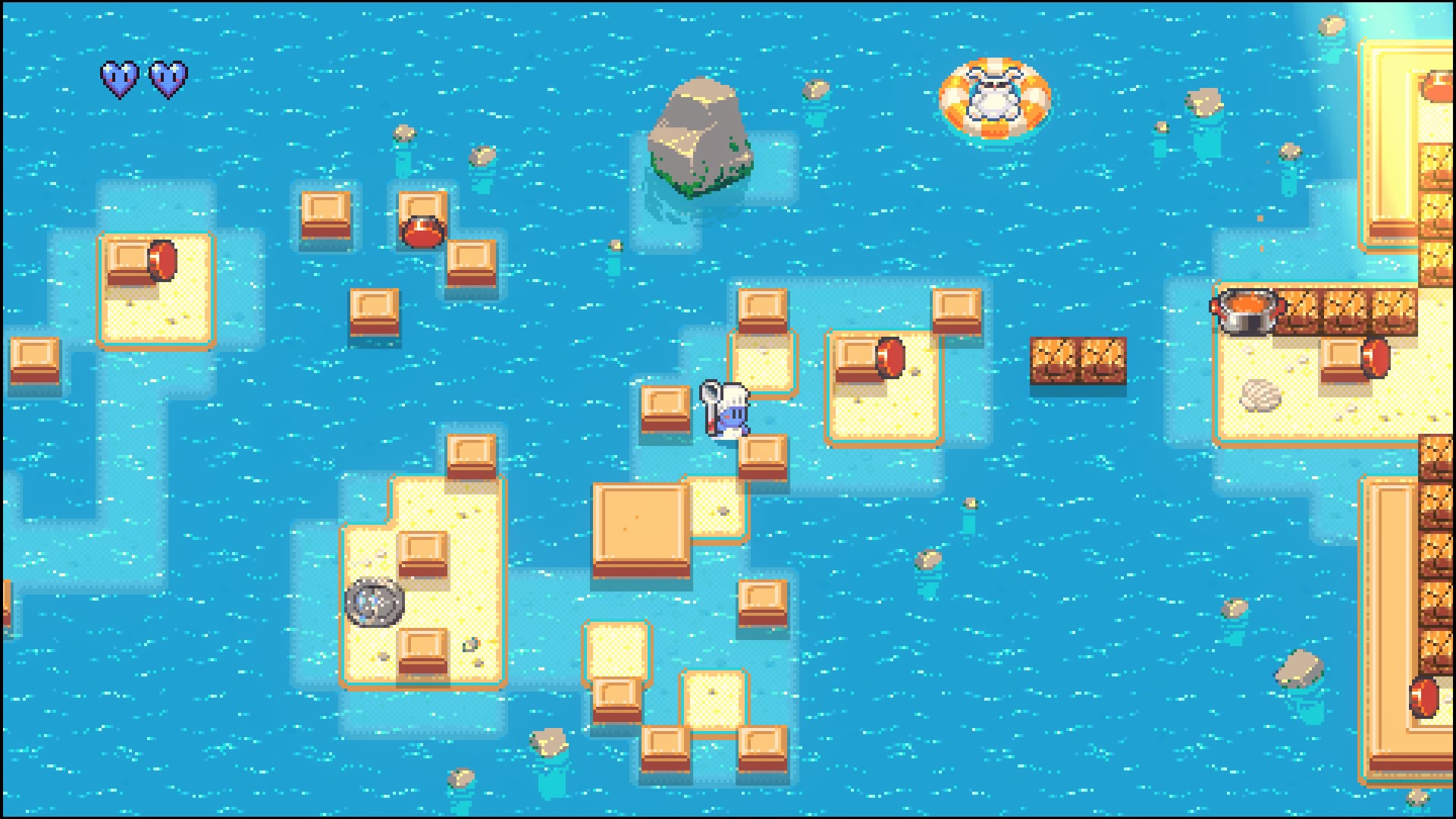 The gameplay is also well-served by the game’s presentation. I definitely get the feeling that developer Pugstorm was going for a 16-bit throwback with Radical Rabbit Stew, and that suspicion only grew as I continued to play. Thankfully, they took inspiration from the greats. The sprite work is beautifully done, lending some real life and breath to the game, especially for the gigantic bosses, and the screen shake effects, which feel lifted straight from the Ace Attorney series, make every slap oh-so-satisfying to pull off.

And then, the soundtrack. Let’s just say that it slaps. It sounds like it came straight off the Genesis soundchip, and I know I said I was a Nintendo kid, but I will readily admit that the Genesis probably wins when it comes to 16-bit sound. The soundtrack is complemented by some wonderfully cartoony sound design, making every environment absolutely brimming with audible action. 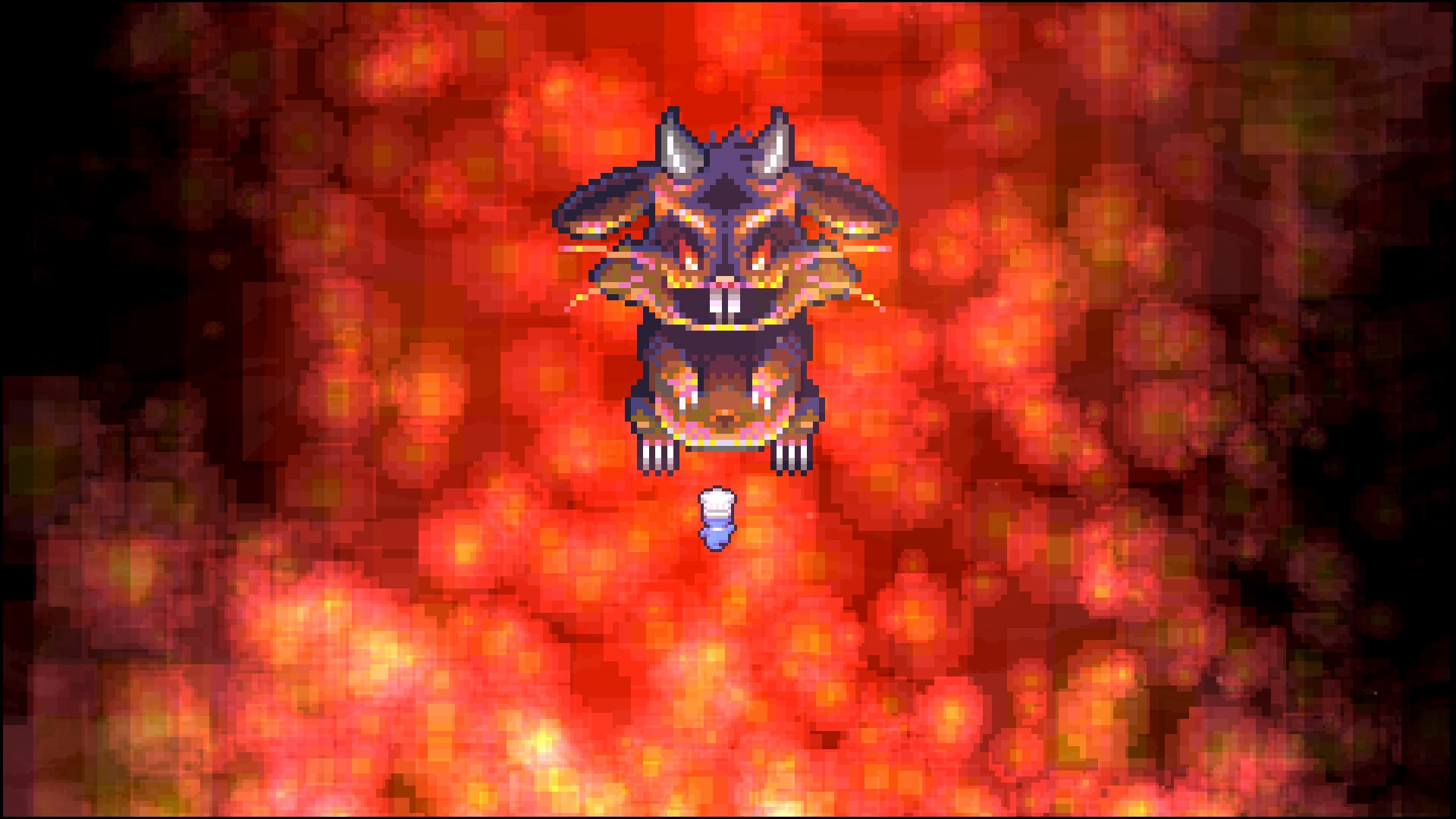 I ran into one major gripe near the end of the game. For the most part, the game doesn’t go crazy with its action stages, but there were a couple levels that threw a lot at me all at once. Bombs, explosive enemies, roller rabbits, and more all flew at me at rocket speed. Combine that with the screen shake and flash effects, and it got to be a bit much. These levels are few, though, and don’t impact the overall experience too much.

I know all good things must come to an end, but Radical Rabbit Stew’s ending came a whole lot faster than I was expecting. There are only three worlds, and they’re not very well-balanced in length. I beat the first world in my first twenty minutes of gameplay, but the next world took almost two sessions of thirty to forty-five minutes each to complete, while the final world again took less than thirty minutes. There’s even an achievement for completing the entire game in less than three hours, which, for an 18 dollar game, feels a little thin. I went for every extra blue coin, and I was still done with it in under 5 hours. But if my main complaint is that it’s too short, that’s a testament to the fact that I wanted to play longer. 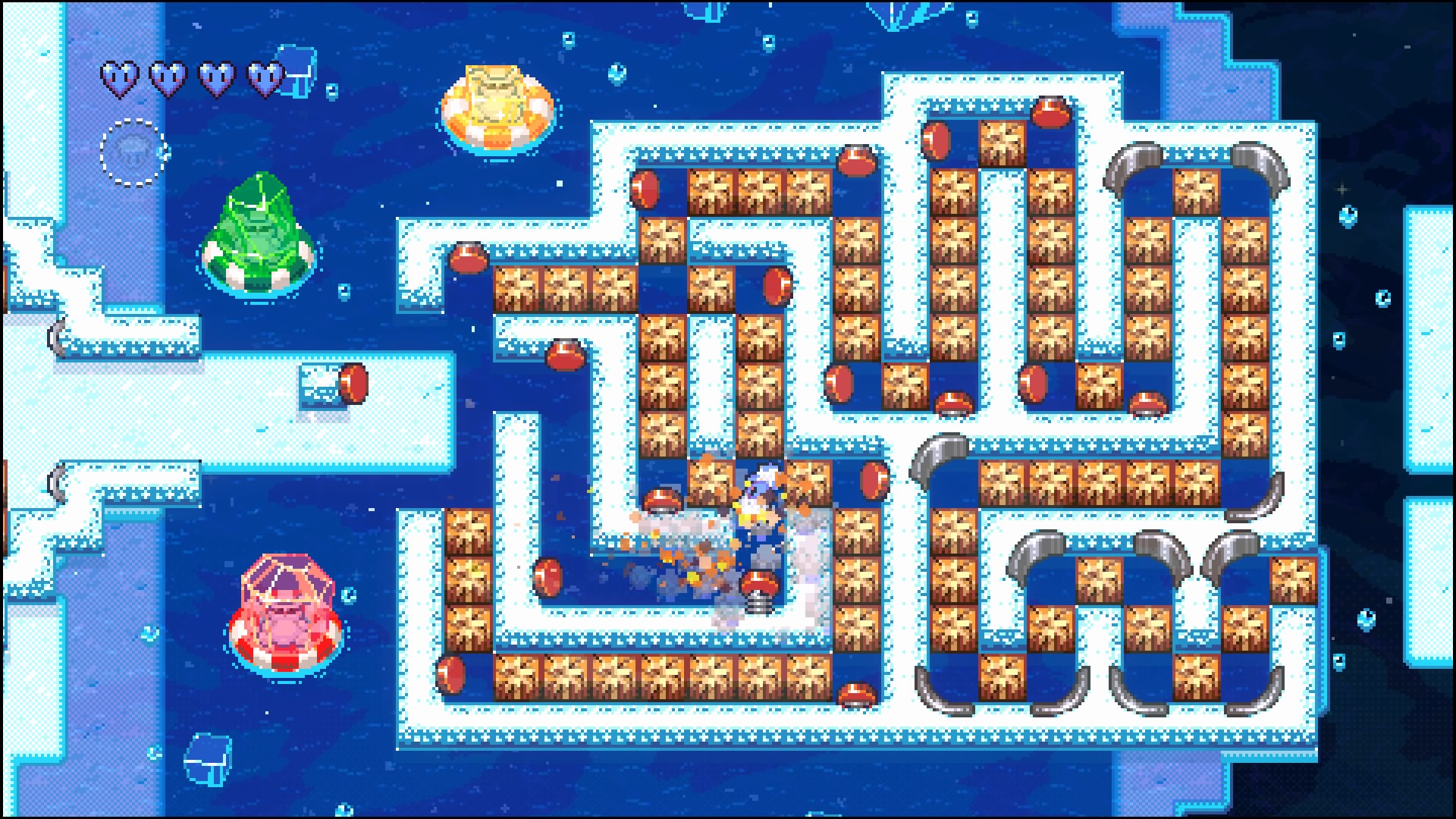 Radical Rabbit Stew satisfied an itch I didn’t even know I had: an itch for a nostalgic, satisfying, non-frustrating puzzle/action game. Never once did I find myself stuck on a level that mocked me with its overly hard design, but neither did I breeze through the game without thinking. It struck a balance of careful problem-solving with frantic obstacle-dodging and exploration that left me eagerly moving to the next level just to see what I would get to do.

I do have to reiterate that the amount of content on display here is pretty slim. I would recommend waiting for a slight sale if you’re short on cash, and I hope to see some extra content added in the future, which would even further justify a purchase. But if you’re in need of a quick little nostalgic romp with thoughtful, action-packed gameplay and gorgeous presentation, then Pugstorm has cooked up just the stew for you.

Radical Rabbit Stew nails its particular blend of fast-paced action and thoughtful puzzling to create a game that holds your interest to the last bite.