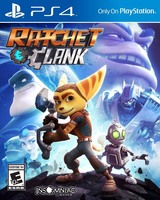 Ratchet & Clank for PS4 re-imagines the duo’s original adventure on PlayStation 2 with a fresh new HD graphics engine and never-before-seen gameplay that celebrates this classic franchise’s contributions to the industry.

Save the galaxy as Ratchet, a wrench-wielding Lombax who desperately wants to join the group of heroes known as The Galactic Rangers, and his robot buddy Clank, a defective warbot, in this action-adventure with a multitude of crazy weapons, ships, and hilarious shenanigans. Following the events of both the original game and the feature film, this game shares the film’s vision of Ratchet’s origin story for both new players and classic Ratchet fans to enjoy. 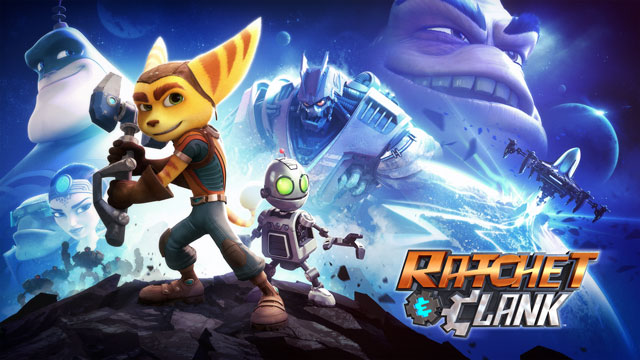 As it  is rated E for Everyone 10 and up, Ratchet & Clank contains content that is suitable for the whole family. There is no drug use, sexuality, or extreme violence of any kind. Enemies are only knocked out when defeated and since most are robotic, the worst examples of violence include exploding pieces of robots and/or enemy spaceships. While most of the jokes in the game are family-friendly,  some are fourth wall breaking and will go over the head’s of most youth due to a familiarity that only adults and much older youths will pick up on. For example, early on in the game, a major character acknowledges that the developers made a game based on the move which was based on this game. 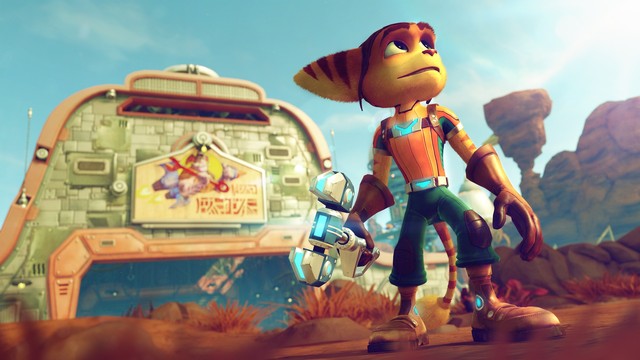 I will admit that I never got around to playing the original Ratchet & Clank games that came out on Playstation 2 way back in 2002. However, I had always read and heard great things about the series as more and more sequels came out for PSP, PS3, and PS Vita. As my first foray into the fantastical world that Insomniac has created with Ratchet & Clank, I had zero expectations going into this game and I have to say I was not disappointed at all with what I played.

Today, platformers are all but a thing of the past on consoles outside of Nintendo’s home console and handheld Mario titles, however Ratchet & Clank is a re-imagined interpretation of what strengths the genre can bring to today’s market. The game looks, feels, and plays like an interactive Pixar orDreamworks movie, complete with an inspiring message about the virtues of friendship and how we should never give up on our dreams no matter how grand or extravagant they may be.

While Ratchet is the the last of his race of the animal-like Lombax. He has big aspirations and hopes to move from a life of being a mechanic to becoming a member of The Galactic Rangers, a team of intergalactic heroes led by Ratchet’s idol, Captain Qwark.  Quirky and overtly macho, Captain Quark also narrates the tale throughout the game. After winning the competition to join the team, the Rangers initially praise Ratchet for his performance in The Galactic Ranger Trials, however, judging him based on appearance alone, they deny Ratchet membership onto their team. Soon, a chance meeting with a defective warbot named Clank, who carries a warning of doom for The Galactic Rangers and the entire galaxy, will change everything. Embarking on a galaxy-wide quest with his new-found robotic friend, Ratchet is thrust into the life of adventure and heroism that he has always craved as the heroes race to save their home, and the entire galaxy, from the evil Chairman Drek and his army of warbots. 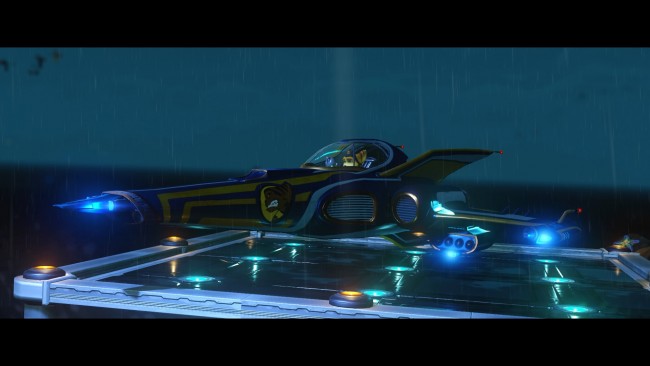 Unlike traditional platformers, Ratchet & Clank’s combat plays out more like a traditional third-person shooter, with many zany weapons, and a few new additions not found in the original games. For example, one new gun, the Pixelizer, changes enemies into an 8-bit sprite when fired. Another weapon, The Groovitron, shoots a disco ball that causes enemies to break out into dance leaving them vulnerable to a follow up attack. Beyond the more creative weapons, Ratchet has a trusty wrench which is used to turn cranks for some light puzzle solving and his buddy Clank can turn into a propeller allowing for longer jumps across gaps. Clank can also turn into a wearable boat engine when underwater allowing Ratchet to dive deeper and swim further before needing to resurface. There are also some Metroidvania-like elements to the game as some collectible items and secrets can only be accessed once you have obtained key navigational upgrades later on in the game. 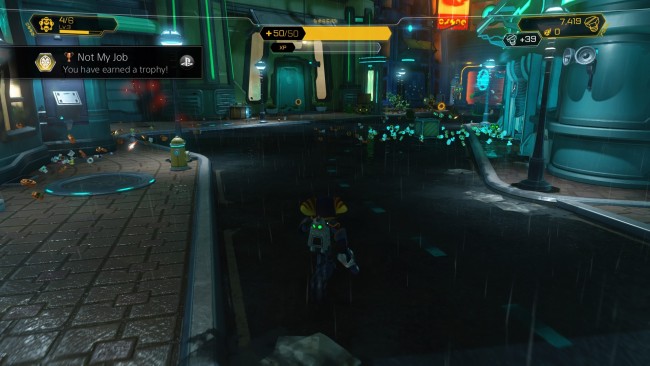 While each of the game’s levels are fairly linear, there are multiple optional objectives and hidden collectibles on each planet which include gold bolts and Holocards. Holocardsare a new addition to the PS4 version of Ratchet & Clank and they can be used to unlock a new, high-powered weapon or other upgrade items. Cards can be obtained from defeating groups of enemies or after boss fights. Special RYNO Holocards are hidden in each world of the game and collecting them all will require players to return to previously cleared stages with new items to access previously unreachable areas. 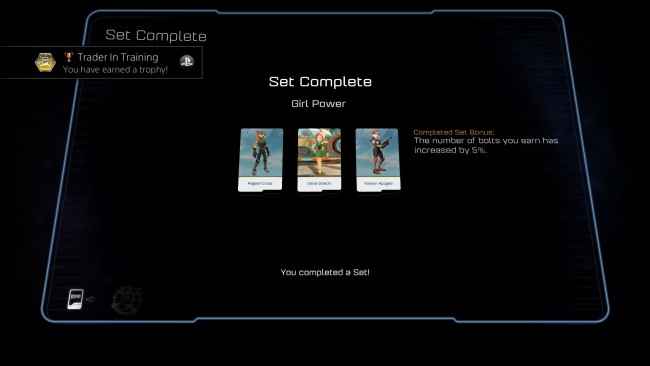 Most of the game’s levels play out the same as players will navigate through the environment defeating enemies and solving very simple navigational puzzles to save an NPC who will offer a new quest or side-mission or to obtain a specific item for The Galactic Rangers, which can then be used by the player in later levels. However, the platforming and shooting elements avoid monotony as the game also offers a fun diversion in the form of Gravboard races. After a certain point in the game, players can choose to compete in one of three Gravboard races in the Bronze, Silver, or Gold tiers. Completing each tier earns money, HoloCards, and crystals which are used to upgrade weapons and equipment. Players can return to the planet to replay these races at any time. 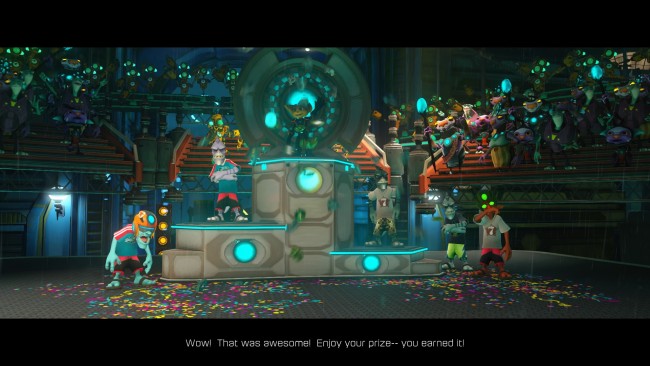 There are also a few moments where Ratchet is separated from his robot companion and players are given control of Clank who can manipulate other robots to create bridges, springs, or other navigational tools to access previously unreachable areas. Clank is also fairly versatile and can engage in limited combat with enemies. A few levels even offer segments where players engage in dogfights with enemy ships which helps the game to really feel like a you are working to save not just each planet but the entire galaxy as you take the fight to space and beyond. 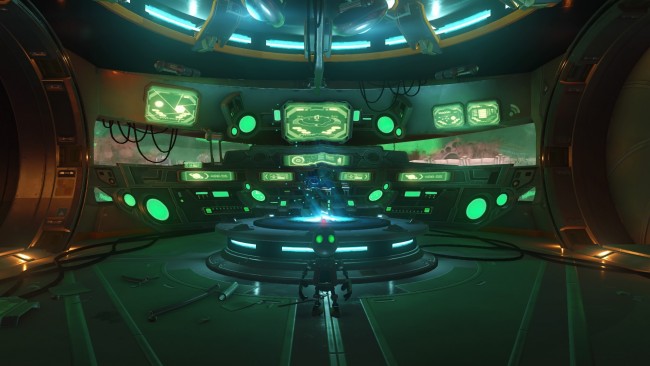 Boss fights play out as a combination of the game’s standard fire fights with enemies and your run-of-the-mill discover the boss’ weakness and exploit it trope. While fun, these moments didn’t really stand out to me as being incredibly epic or memorable which is unfortunate as the game’s story really has that Pixar and Dreamworks “tug on the heartstrings, make you wanna cry”
kind of feel to it which doesn’t translate well over to the gameplay. However, Ratchet & Clank‘s overall gameplay works very well by today’s standards and the game is fun and difficult to put down once you start playing. 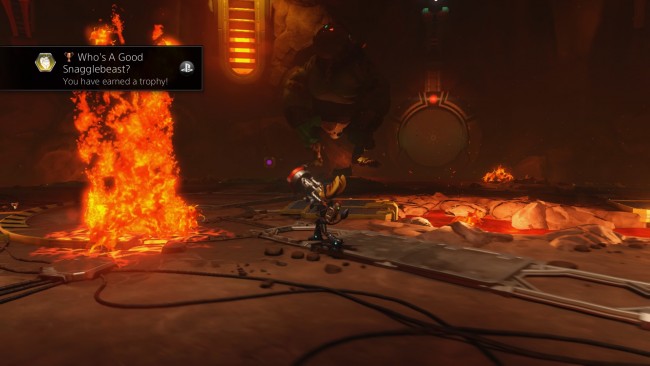 While Rachet & Clank is long for a platformer, clocking in at around 12-15 hours for completionists, there is very little to do once you have collected everything and beat all of the Gravboard races. Revisiting planets only offers a handful of enemies to fight and there is very little incentive to return other than to snag any missed collectibles. This is disappointing due to how much fun it is to play and be taken back to the golden age of platformers when games like Crash Bandicoot and Bubsy ruled gaming.

Overall, I would recommend Ratchet & Clank to fans of the original series and of the film that released on April 29th, shortly after the game’s launch earlier that month. With its fantastic, cinematic story, excellent voice acting, and humorous narration by Captain Qwark, Ratchet & Clank offers a fun, family-friendly adventure that gamers of all ages can enjoy. There is very little that I have to complain about with this game, lack of replay-ability aside. For anyone like me who never played the original games, you owe it to yourself to give Ratchet & Clank a shot. And Hey, at forty bucks it’s certainly an affordable diversion from the never-ending torrent of shooters and MOBAs that launch almost every other week.

Ratchet & Clank on PS4 is a great point of entry for newcomers to the franchise and a wonderful walk down memory lane for returning fans. With new weapons, new levels, and a re-worked story to align with the film based on this game, there truly is something here for everyone.