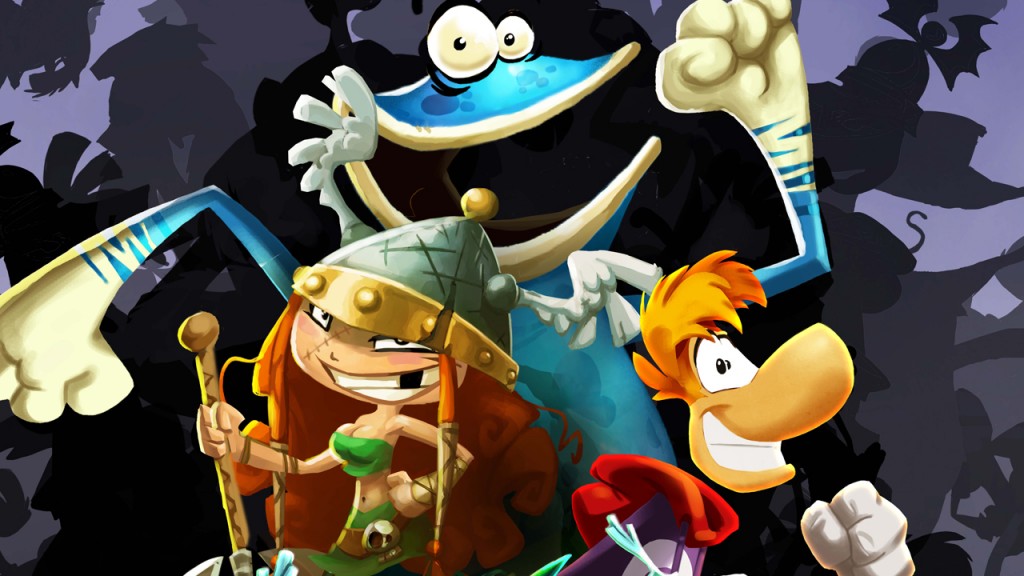 There are a few palette-swapped versions of Barbara that wear skirts. When they die, they inflate like balloons, similar to all the other characters when they die, but because they are wearing skirts, their underwear becomes noticeable. “Did you know that their underwear shows when that happens?” my wife has asked. My kids giggled and whispered when they saw it for the first time. 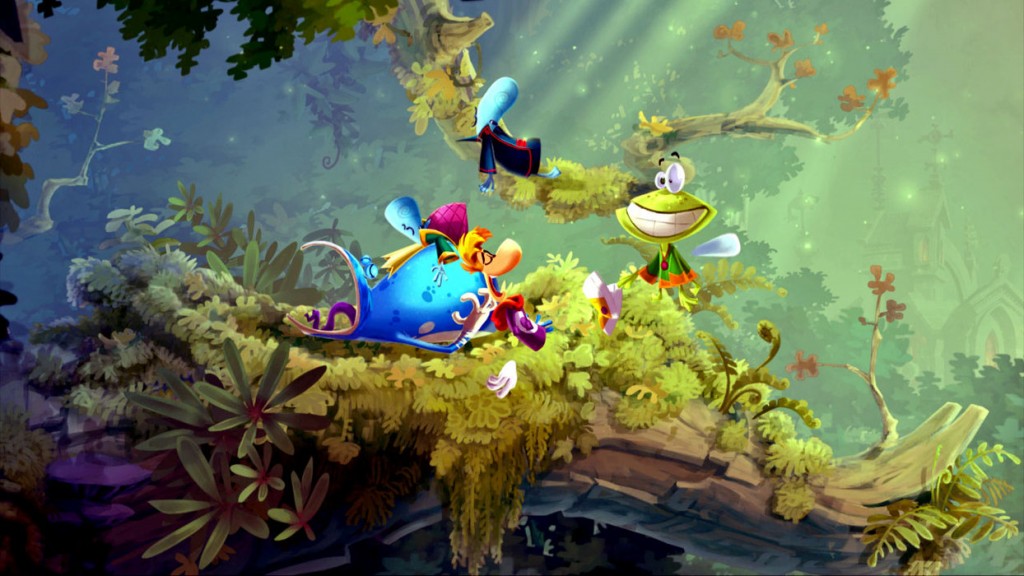 Being a platform game, the story in Rayman Legends is little more than perfunctory. The long-beared creature called the Bubble Dreamer has been having nightmares that have gained strength over the time that Rayman and his friends have been seeping in stasis in the Glade of Dreams. Murfy goes to awaken Rayman and friends so that they can defeat the invading nightmares. 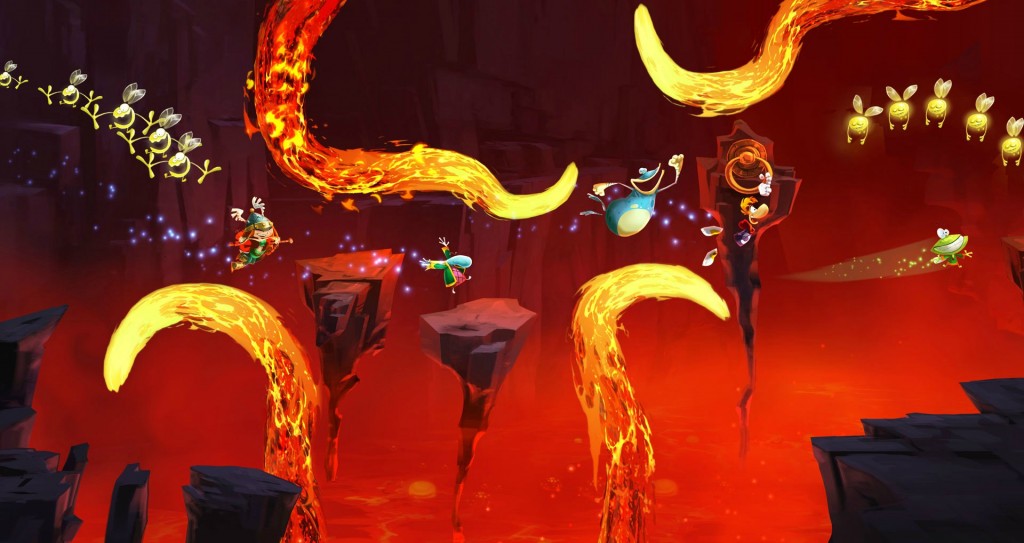 HD enhances the ominousness of those flames. Even Rayman’s crew looks happier on the Wii U.

I recently published a Backloggery Beatdown on Rayman Origins. Miraculously, all of my criticisms of that game have been remedied in Legends. Gone are the silly per-abilities missions. Every skill that players will use throughout are unlocked from the beginning. Instead of borrowing from the conventions of the action-adventure genres where players accumulate powers, Legends focuses purely on the collect-a-thon, and the biggest improvement from Origins to Legends in this aspect is that the game no longer merely pretends to copy the New Super Mario Bros. series by simply offering simultaneous play with four (or more if one counts Murfy) characters. Now, instead of having to collect as many Lums as possible to accumulate Electoons in order to access the unlockables, players now must collect Teensies within the stages themselves. Many of them are hidden precisely like Star Coins, which means that collecting them all will require some gamer’s intuition and skill. In the meantime, Lums have shifted in their use. Accumulate them to earn Lucky scratch-off tickets (for more unlocks) and gold trophies to demonstrate “mastery” of a stage, but they are no longer required to unlock additional levels like in the previous game. This was a streamlining move, because collecting those Lums in Origins was often more tedious than fun.

The levels themselves are plentiful notwithstanding that forty of them are revisions from the previous game found in the world selection hall titled “Return to Origins.” The other sections divide the levels between “galleries” represented by “paintings” which players will jump into to reach. Despite the difficulty of the primary levels ranging from easy to moderately difficult and there not being any powerups besides the heart vases that provide the characters with an extra hit, they never become boring. The variety in their themes and design compels one to never quit looking for that last teensie or strive for a better run. I am particularly fond of the speed-run levels preceding the rescue of one of the many warrior princesses scattered throughout the levels. They are spoofs of Xena: Warrior Princess, sporting weapons and often bearing scars and missing teeth, and their thin, cartoonish frames are certainly more muted articulations of femininity than the robust nymphs which accompany seductive tunes when they are rescued in Origins. Though they begin as damsels in distress, they are interesting additions to the Rayman lore and companions in the game. Certainly, they are more interesting than Globox and Teensie #1 and #2. Thankfully, there is more variety to the characters in Legends than in Origins, and as much as I trash on Globox, I find myself playing with him in the Luigi costume more than any other character because it is easier to spot him in that costume while onscreen with three other characters on the screen such as when my kids play with me. 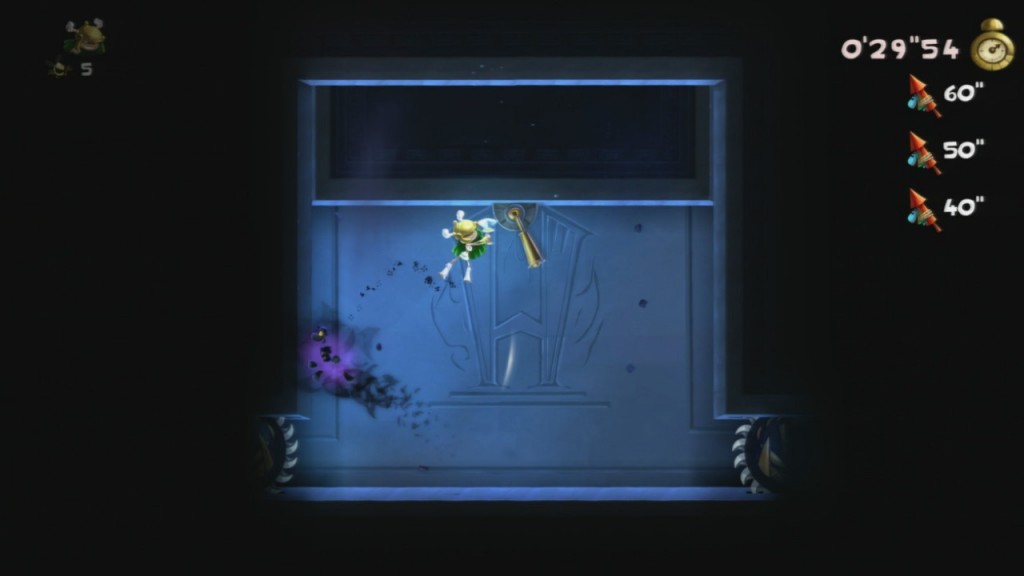 Legends reprises the treasure chest chases in “Return to Origins” levels, but the main skill-checks in Legends include the timed “Invasion” stages which are reverse-engineered speed runs. There, players will need to maximize momentum in order to save all three Tensies in forty seconds. There are a couple of these levels that are designed with such precision whereas even some of the expert speed runners on YouTube have had trouble shaving seconds off the clock.

If the invaded stages are not challenging enough for players, Legends hosts daily and weekly skill competitions. Technically speaking, because Ubisoft updates these daily and weekly, one could say that Legends offers infinite replay value. However, after seriously dedicating myself to these for awhile, they become repetitive because they are merely remixes of preexisting levels rather than genuinely unique ones. Only excessively competitive and devoted of Rayman fans may find themselves itching for these with  frequency. 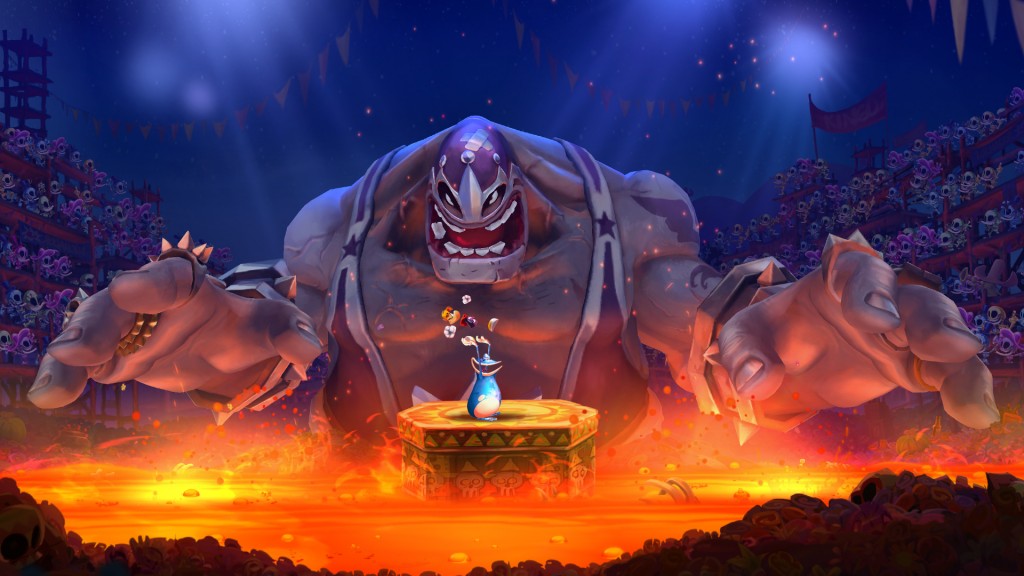 This boss fight against the monstrous Lucha libre is the best!

Finally, the conclusion of each world features a charming rythmn-based —yep, as you would have guessed—speed run that auto-scrolls so that players will stay on beat or die. A couple of these stages include parodies of actual songs such as Gloo Gloo which features a melody similar to “Woo-Hoo” or Castle Rock which features a melody similar to “Ram Jam.” These levels in their basic forms are quite the showcase of good programming, design, and sheer creativity. However, the endgame versions of these levels are their 8-bit equivalents which are challenging because of reasons opposite of what I just said. Whoever thought it would be amusing to intentionally distort the screen as if players were trying to play Legends on a television from the 1950’s is a troll who deserves to be slapped. I grew up playing NES on a console television and my display never looked as pixelated or fuzzy as those stages would become at crucial moments. I am confident that those final stages will cause damage in peoples’ vision.

One should approach Rayman Legends as a comprehensive expansion pack to Rayman Origins. Put another way, with Legends, I feel that there is no need to play Origins except for the most hardcore of hardcore Rayman fans. Legends improves upon its predecessor with more levels, more characters, and more balanced difficulty spikes. However, though it features a few new tracks, many of them have been recycled from Origins. All said, I recommend Rayman Legends for all audiences, particularly because Rayman’s creator and designer, Michel Ancel, has left Ubisoft to form his own company. It is possible that this may very well be the last great Rayman game.

Rayman Legends positively compliments the long-standing franchise and is a fantastic alternative to a certain other platform franchise which features four simultaneous players.