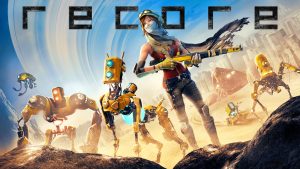 As a collaboration between legendary Mega Man Creator Keiji Inafune and the developers of Metroid: Prime comes ReCore. As one of the first new IPs from Microsoft on Xbox One, ReCore is a third-person action-adventure game starring a female protagonist. Stranded on a planet nearly devoid of resources, heroine Joule relies on her robotic companion, Mac, to find answers about her father’s research on the mysterious resource-rich planet known as Far Eden. Here, Joule and Mac encounter new robots, both friend and foe, as they fight to save Far Eden, and themselves, from a tyrannical robot overlord. 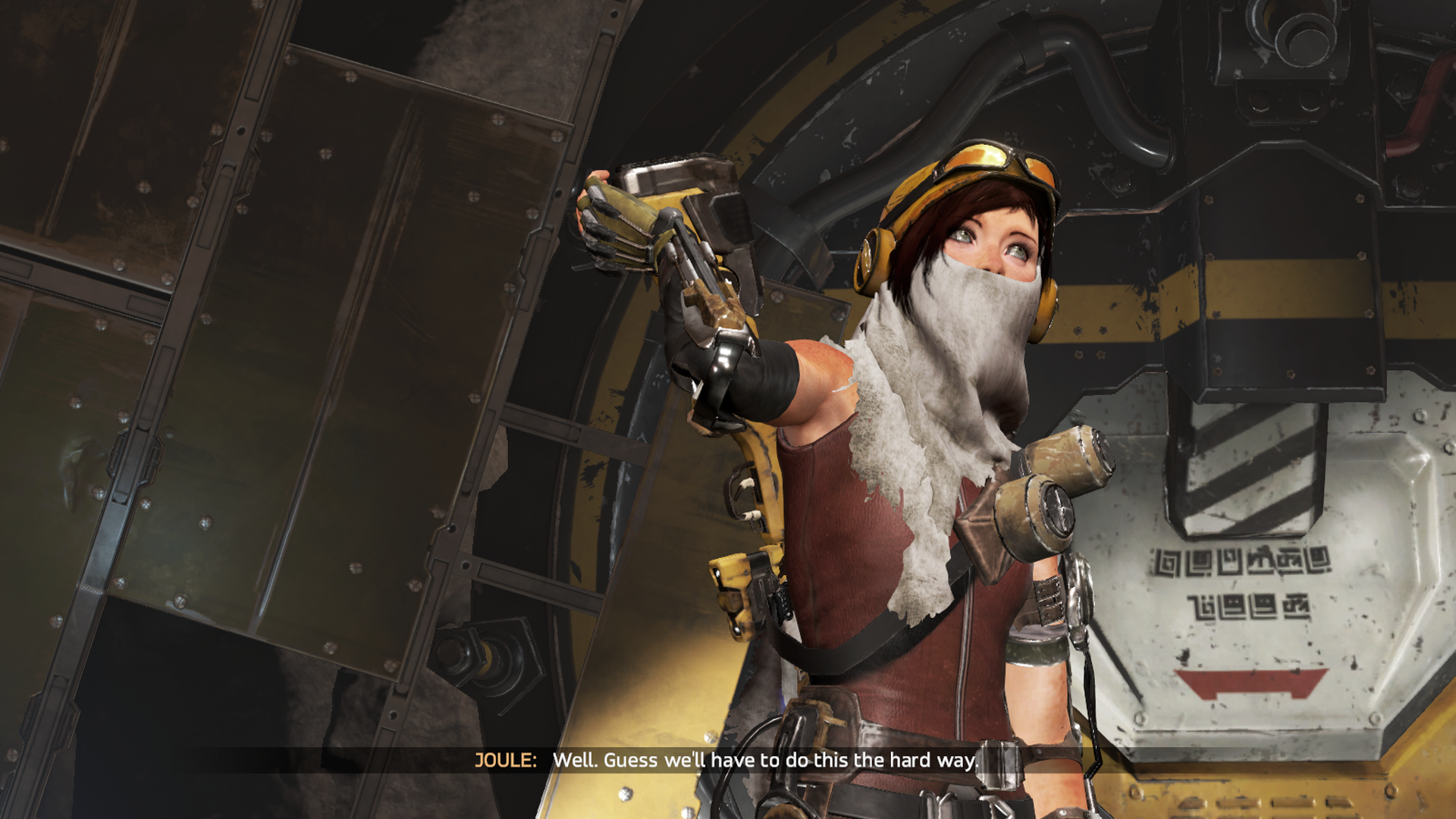 ReCore contains no allusions to religion at all. Since all enemies are robots there is no blood to speak of as enemies simply spark or explode when defeated. Most of the “T” rating comes from the violence and evil motivations of the game’s lead antagonist. 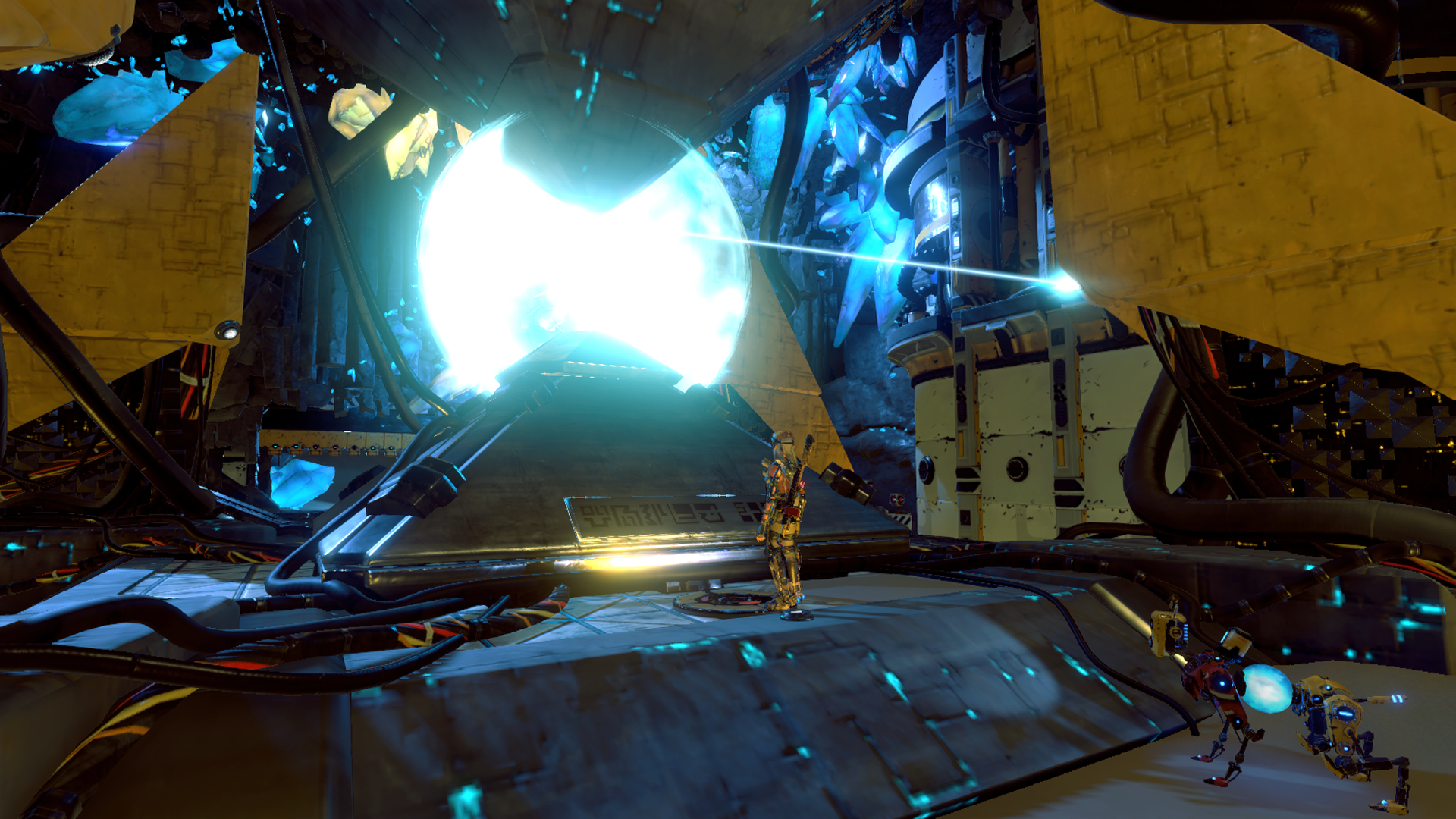 ReCore is a fresh, exciting new IP from Microsoft Game Studios. Hot off the heels of his Kickstarter flop, Mighty No. 9, Inafune and co. have crafted something unique yet nostalgic. The game stars Joule, a young girl whose sand crawler crashes on the planet of Far Eden where her father and his team were experimenting with Cores, a newfound resource on Far Eden that unlocks nearly limitless possibilities when fitted to a robotic frame. These frames take on personalities of their own when fitted with these colored cores and are used to assist the researchers with their work. However, something terrible happens and all human life on Far Eden seems to have been wiped out. With few answers to her questions about her father’s work and even fewer leads on how to start her investigation Joule and her companion frame, Mac, who takes on the form of a dog, venture forth to solve the mysteries of Far Eden.

Gameplay wise, ReCore is basically a 3D Mega Man. Cores can be collected from defeated enemies and from chests scattered throughout  the world and can be combined with other materials to increase the stats and abilities of Mac and Joule’s equipment. Joule’s primary method of attack is her rifle which can be fitted with color-coded attachments that are designed to be most effective against enemies of the same color. Mac also has his own set of attacks and a super attack that can be triggered by pressing the Y button during combat. Enemies range in color from white—basic and mostly harmless—to purple—high-level and extremely dangerous—and cores and weapon upgrades that match these colors can be used to upgrade the robotic frames that accompany Joule and make them more combat effective. Once an enemy has been damaged beyond a certain point, Joule can extract its Core via a tug of war-esque minigame. Enemies that are caught off guard at the beginning of combat can have their cores auto-extracted for an instant takedown. 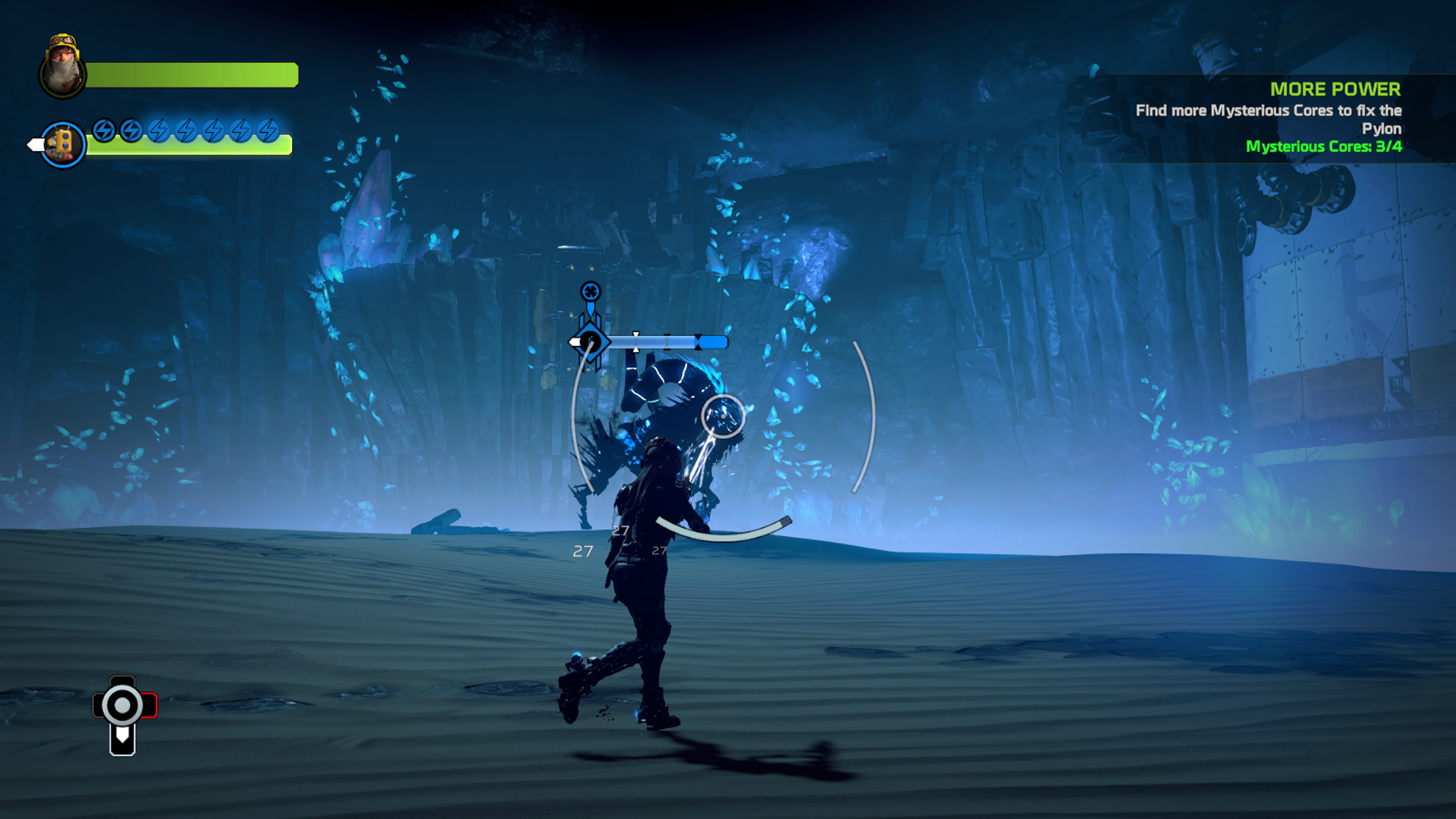 While combat is perhaps the most enjoyable part of the game, there is also fun to be had in exploring the not-quite-so-open world of Far Eden. Darksiders is probably the closest comparison to how ReCore‘s open world actually works. There are key areas on the map that are inaccessible until a certain number of white cores have been found. These cores are used to unlock doors and power on machines that were used by the previous research team on Far Eden. The main goal of exploration boils down to exploring various overworld locations and dungeons to upgrade the characters, frames, and equipment while looking for cores in chests or obtaining them from defeated bosses to open up new areas. Audio logs can also be collected which offer additional insight on the backstories of Far Eden, Joule’s Father’s team, and the game’s robotic antagonist’s and the machines that are trying to form a resistance against them. Unfortunately, beyond the need to grind for materials and seek out additional dungeons, there is very little to do in the open-world outside of the game’s story missions. 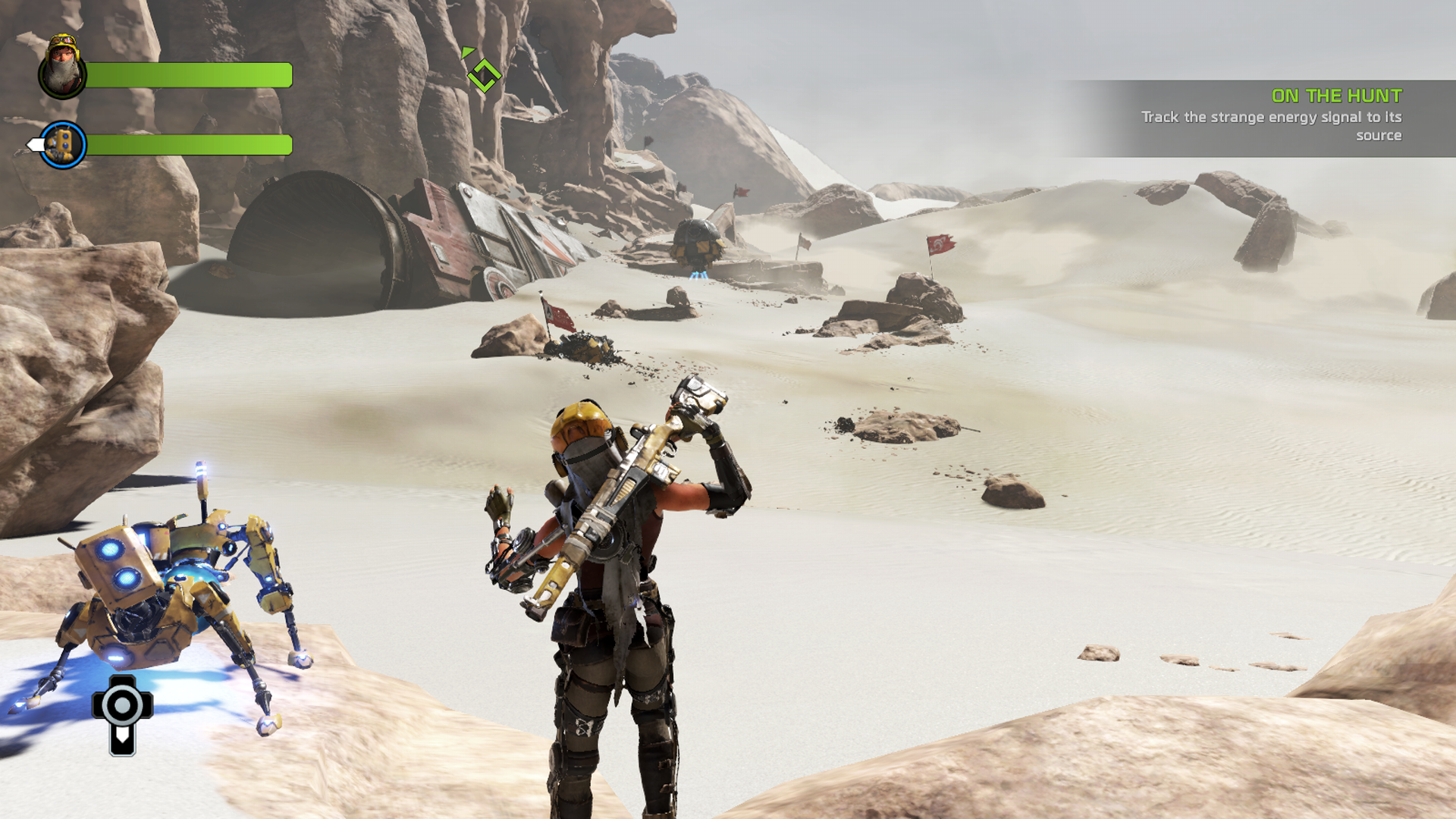 Along the way, Joule will encounter other surviving humans on Far Eden; in exchange for her help, they will provide her with new framers to fight alongside her in combat. These other frames take the form of a spider, a gorilla, and a flying robot that acts as a turret in combat and each one offers additional traversal abilities outside of combat. Joule also has a dash move that can be used up to three times in succession. During combat, this is an effective way to shake off status effects like fire electrical damage. Outside of combat encounters, these maneuvers can be used to assist in solving timed puzzles or reaching distant platforms and lifts.

While the story and exploration make finding the collectibles enjoyable, perhaps the game’s biggest flaw is the abundance of lengthy load times between different areas of the map and when entering dungeons. Even in death, the game forces you to sit through what feels like a 2 minute- long load sequence before thrusting players back into the action. In 2016, lengthy load times without some kind of gameplay tip sheet or interactive load screen is inexcusable. The developers did attempt to address the load times in a post launch patch, yet  they are still quite lengthy. In ReCore, players are forced to stare at a spinning icon in the bottom center of an otherwise black screen before finally being able to take control of Joule again. Another flaw is that outside of combat and exploration, the game offers very little to do other than grinding the same several enemy types for seemingly useless loot while adding incremental upgrades that only offer a slight stat boost to your current loadout. This made the game feel like a slog at times even though the world, characters, and story kept me intrigued and made me want to push forward to the end.

ReCore  is visually very impressive and the environments are beautiful which makes it all the more disappointing that the “open world” is so limited in activities available and the depth in which players are allowed to explore. The game runs smoothly, and I experienced very few stutters during gameplay. However, the game did freeze on me once during combat, forcing me to reload the game to continue on through the dungeon. 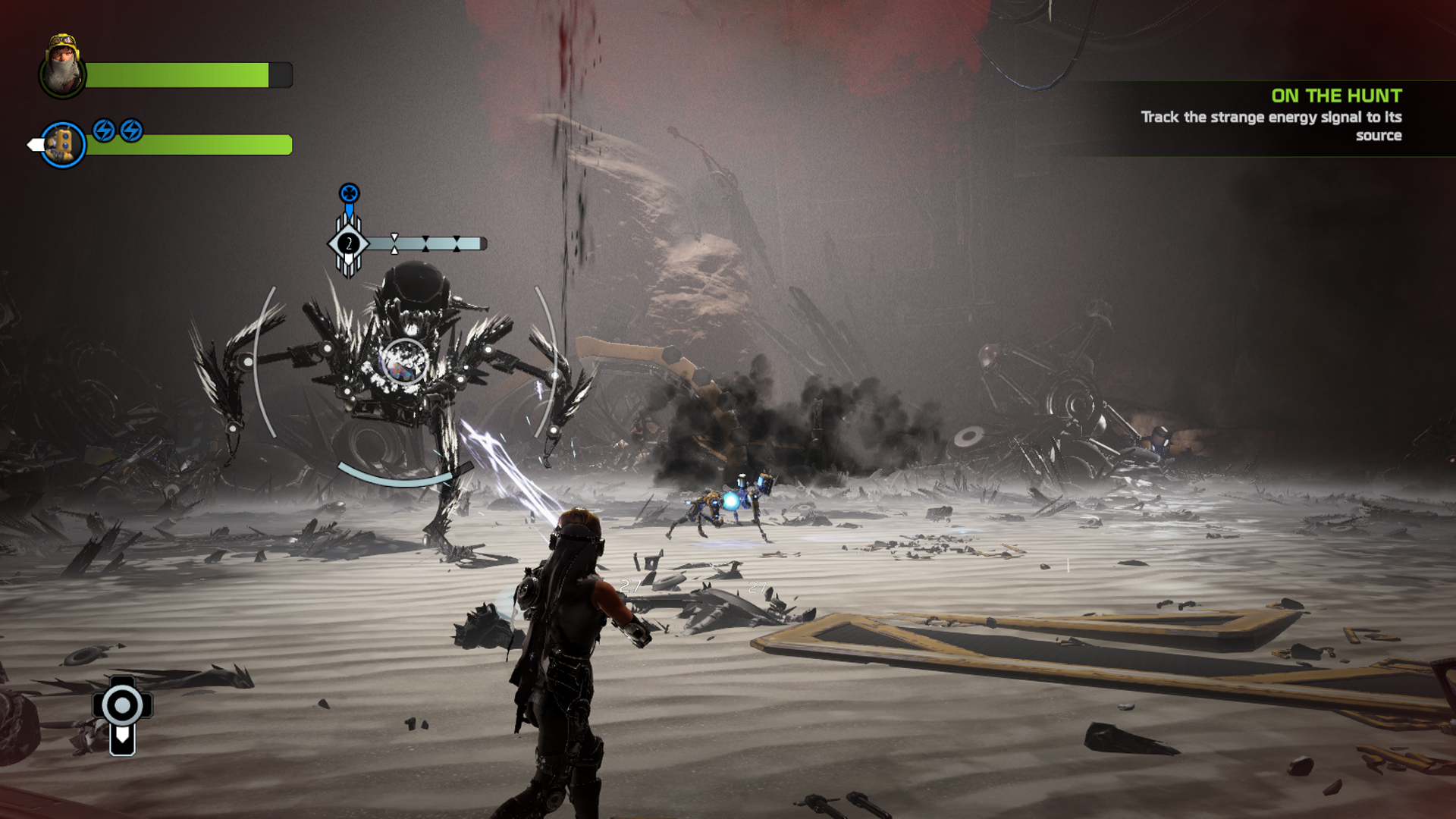 Overall, ReCore is an exciting new IP to be welcomed to the expanding Xbox One lineup. However, what could have been a very surprising, out of left field hit is marred by unbelievably long load times and some minor technical issues. For fans of old-school platformers and classic games like Mega Man or Metroid, ReCore comes highly recommended. Gamers who prefer massive, rewarding open-world environments and an abundance of side quests may wish to look elsewhere instead of purchasing ReCore.

ReCore is an example of a good first attempt at a new franchise that hits a few stumbling blocks along the way. Boasting a mysterious sci-fi story with intriguing characters and environments, the game's luster is tarnished by absurdly long load times between areas and after death. Overall, fans of Metroidvania titles and Mega Man will enjoy Keiji Inafune's latest creation. Fans of deeper, open-world experiences and exploration will be disappointed.