About four years ago, I crowned developer 34BigThings’ anti-grav racer, Redout, as one of the best I have ever played—certainly the fastest. After their success, they would announce that they were working on Redout: Space Assault. After watching the pre-alpha trailer, I placed it on my Steam wishlist immediately. Unfortunately, the game does not meet the expectations the reveal reel sets. 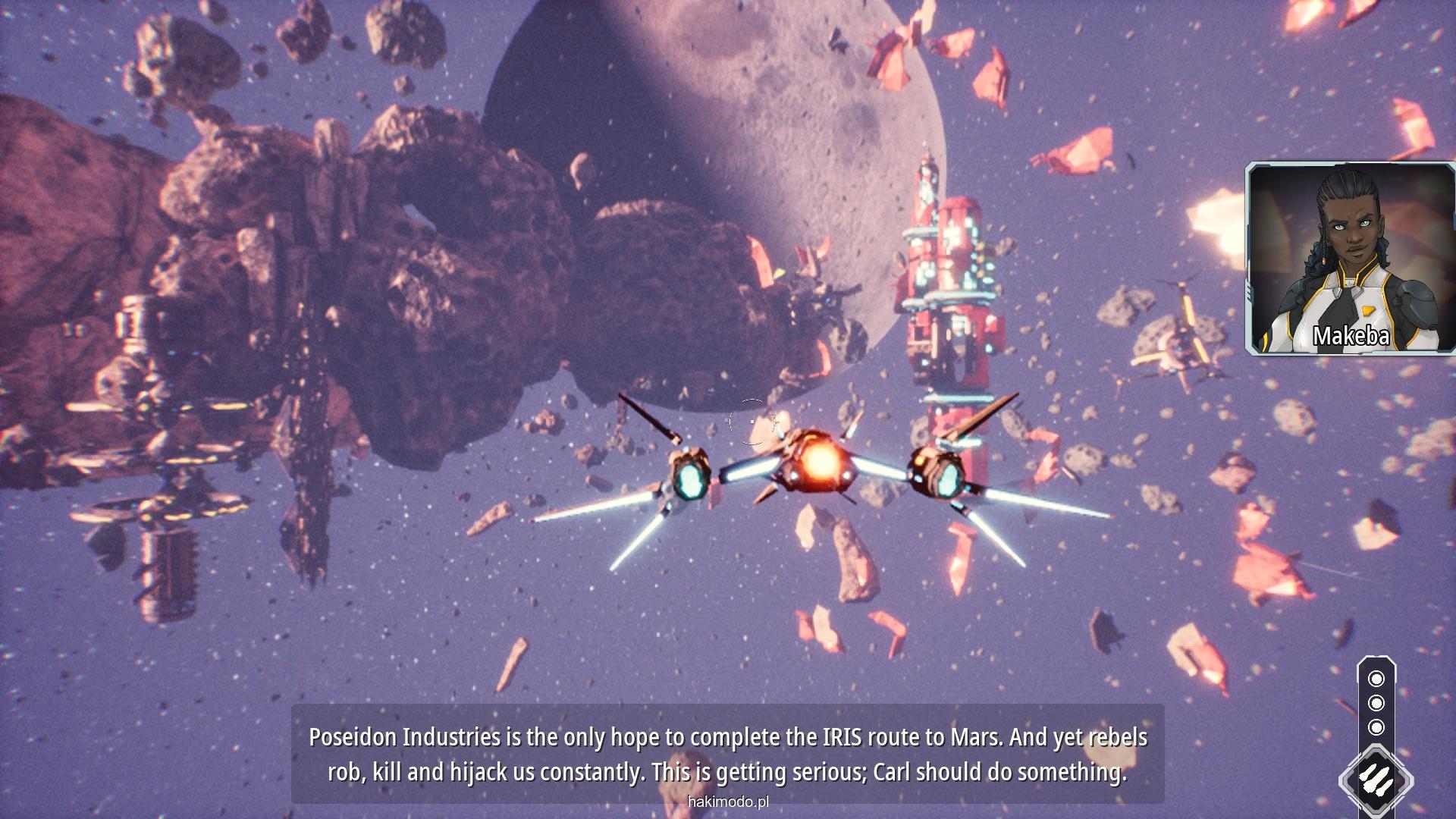 I was surprised to discover that 34BigThings cast a diverse pilot and wingwoman. Shout-out to hakimodo for the screenshots.

During my time with Redout: Space Assault, I did not detect any violent, suggestive, or otherwise mature content that would alarm or offend. 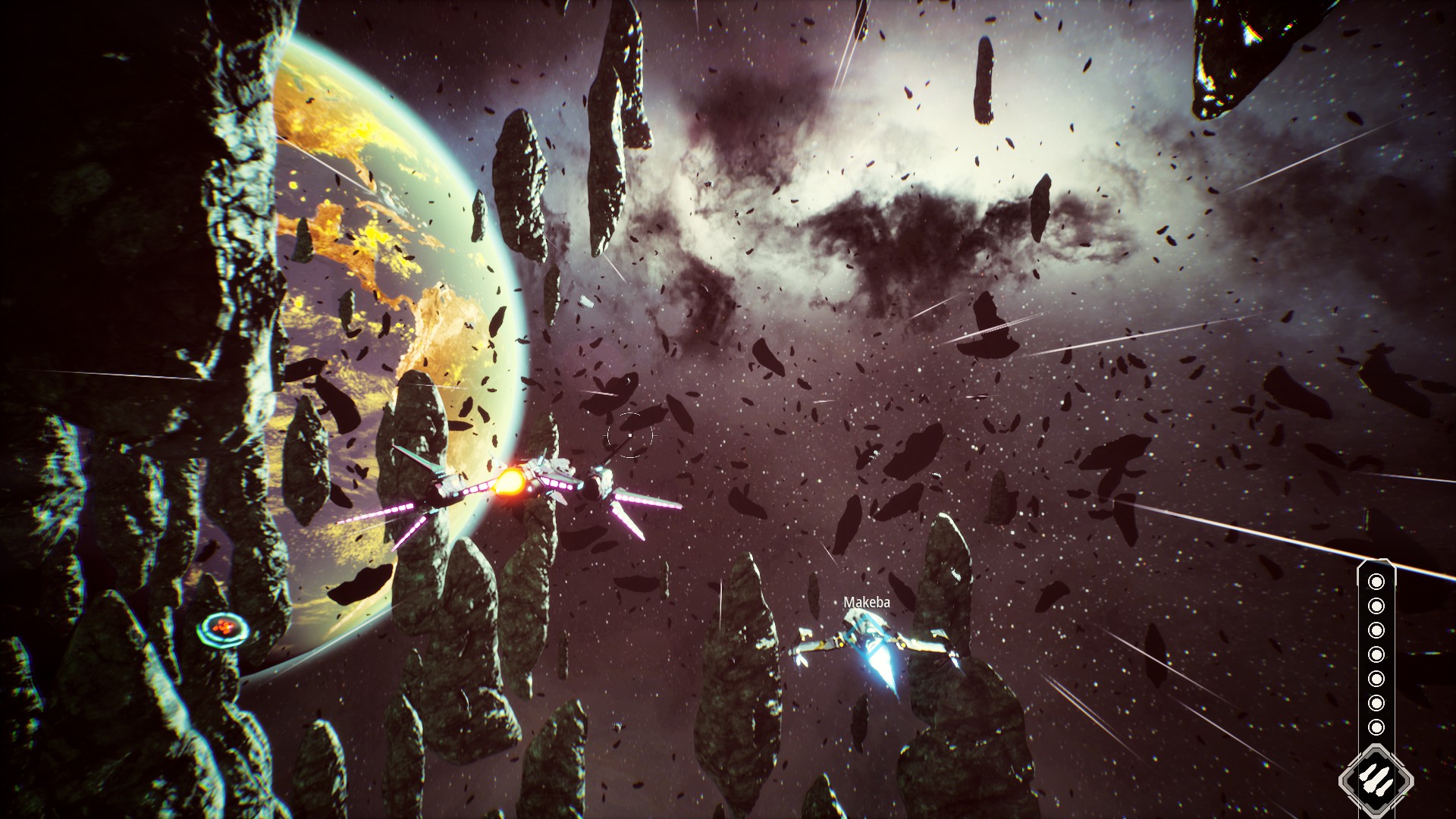 Redout: Space Assault looks great as long as the camera does not get too close.

I must confess that I committed a writing faux pas, the kind that I have always advised my writing team in the video game department here at GUG to avoid: I read a review for a game that I planned on reviewing before writing my own. In my defense, I was bored at work when we received a review copy for Redout: Space Assault, and I only intended to check Steam to see if its store page had updated from “coming soon” to an official release date. After wishlisting it 2018, I had not looked at its page until now. I noticed that the initial reviews were coming in as “mixed.” The top review, a negative, warns “Don’t be fooled by its looks: THIS IS A MOBILE GAME PORTED FROM APPLE ARCADE TO STEAM.” 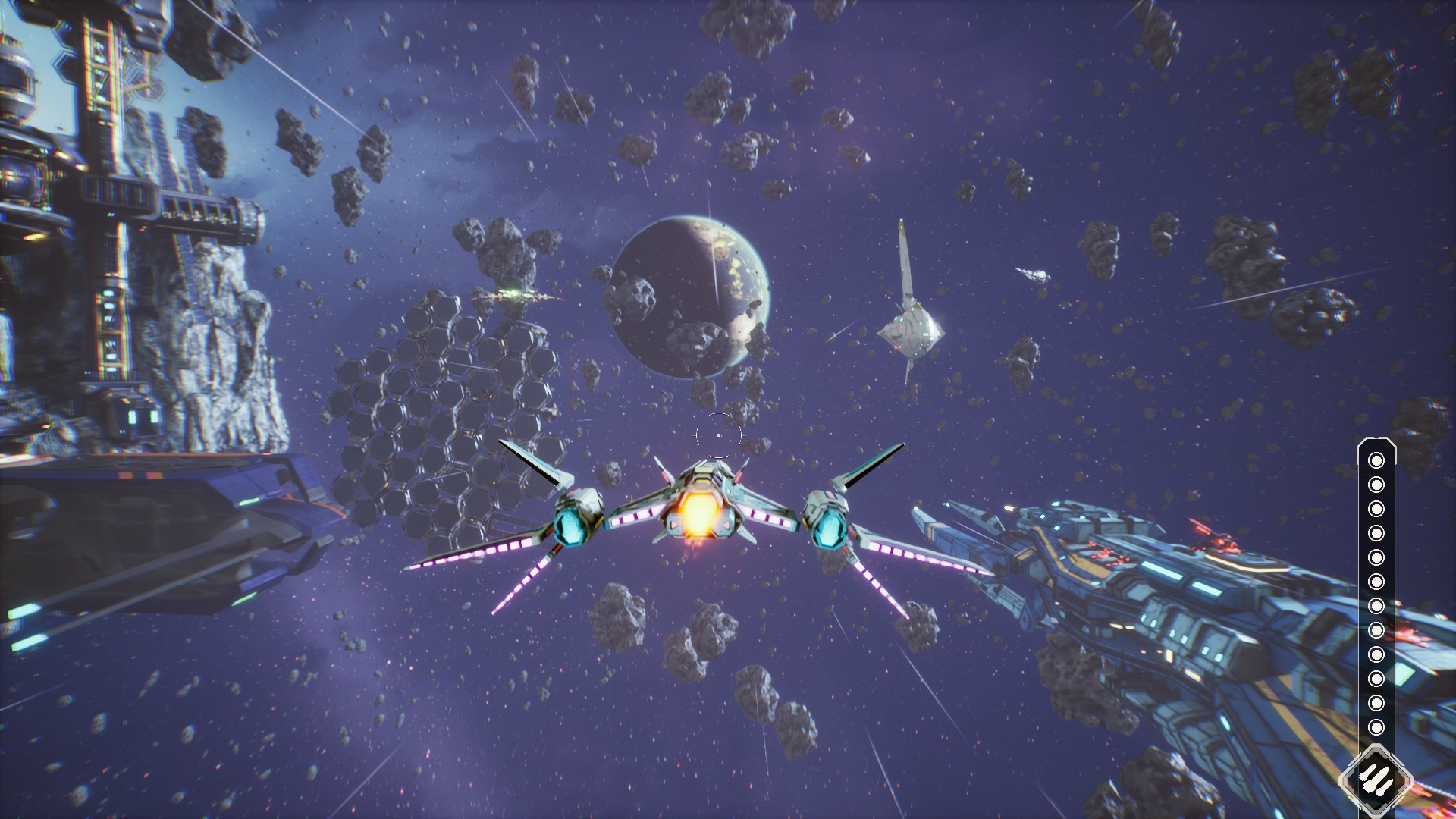 I looked forward to some epic space battles. What I got were bite-sized demos of what might have been.

My heart sank. I have not downloaded a video game on my phone since Plants vs Zombies 2 in 2013 (I have used a tablet on occasion to acquire a game or two for my kids and review purposes). From a business standpoint, I get it; developers produce video games for the most accessible platform to maximize the potential for a return on investment. I am also aware that mobile games have come a long way since Doom RPG, and they can be designed with the complexity and polish that one would expect from a release on gaming-specific systems. 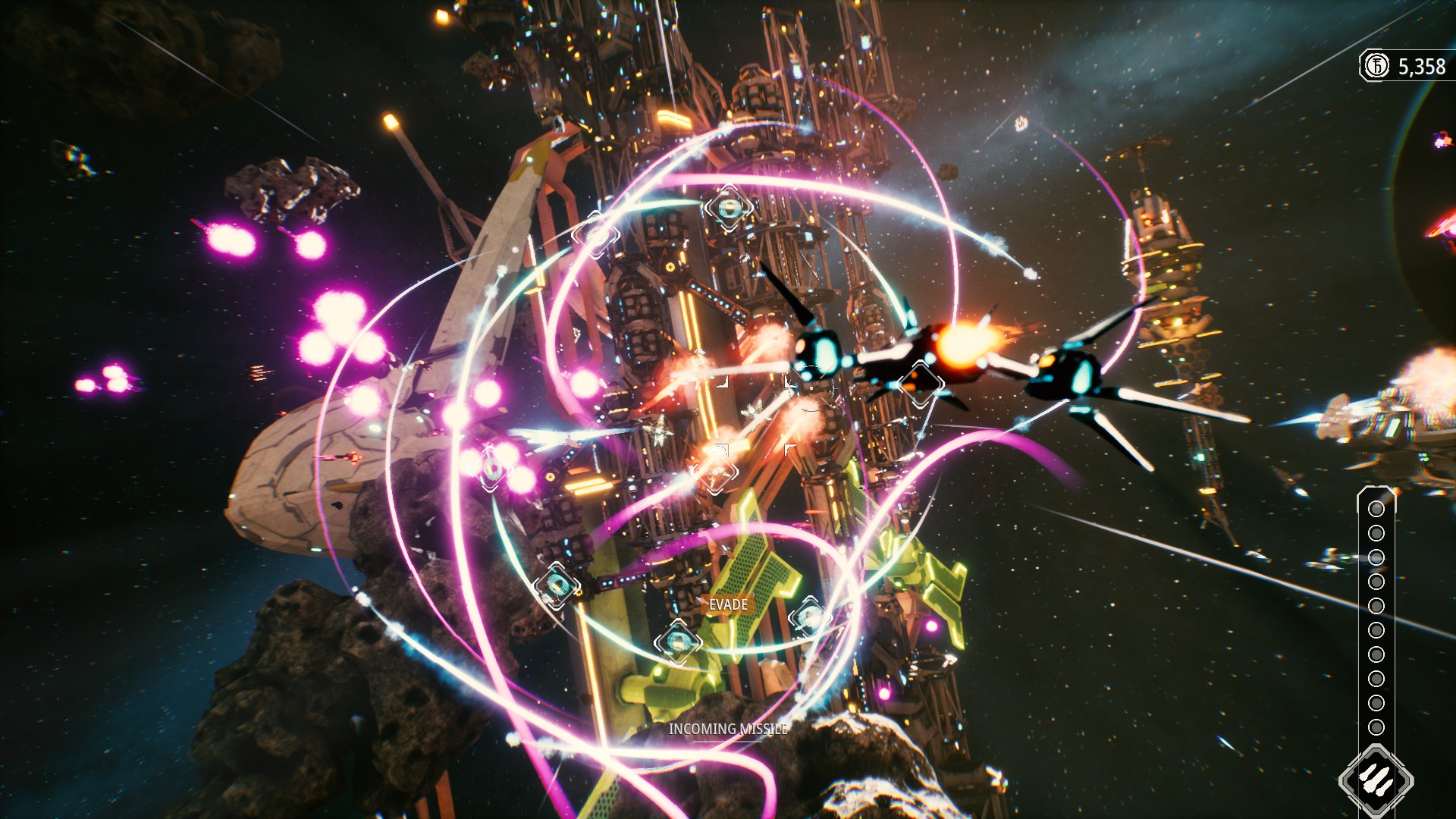 The bullet hell encounters might have been eventful if there was a consequence to dying. In this game, players have infinite lives and sometimes, an invisible time limit.

However, the average mobile game is simpler than the average game on dedicated platforms; Redout: Space Assault falls into the simple category. I do feel as though 34BigThings polished its graphics in anticipation of this critique. The textures of the asteroids are noteworthy, and appear to rival what I would expect to see in competitive space-themed games. That is the best compliment that I can offer though, for the textures found within the hidden hostile bases inside these asteroids, or on fighter bogeys, or on enemy corvettes, expose the veneer of a mobile-to-PC port. 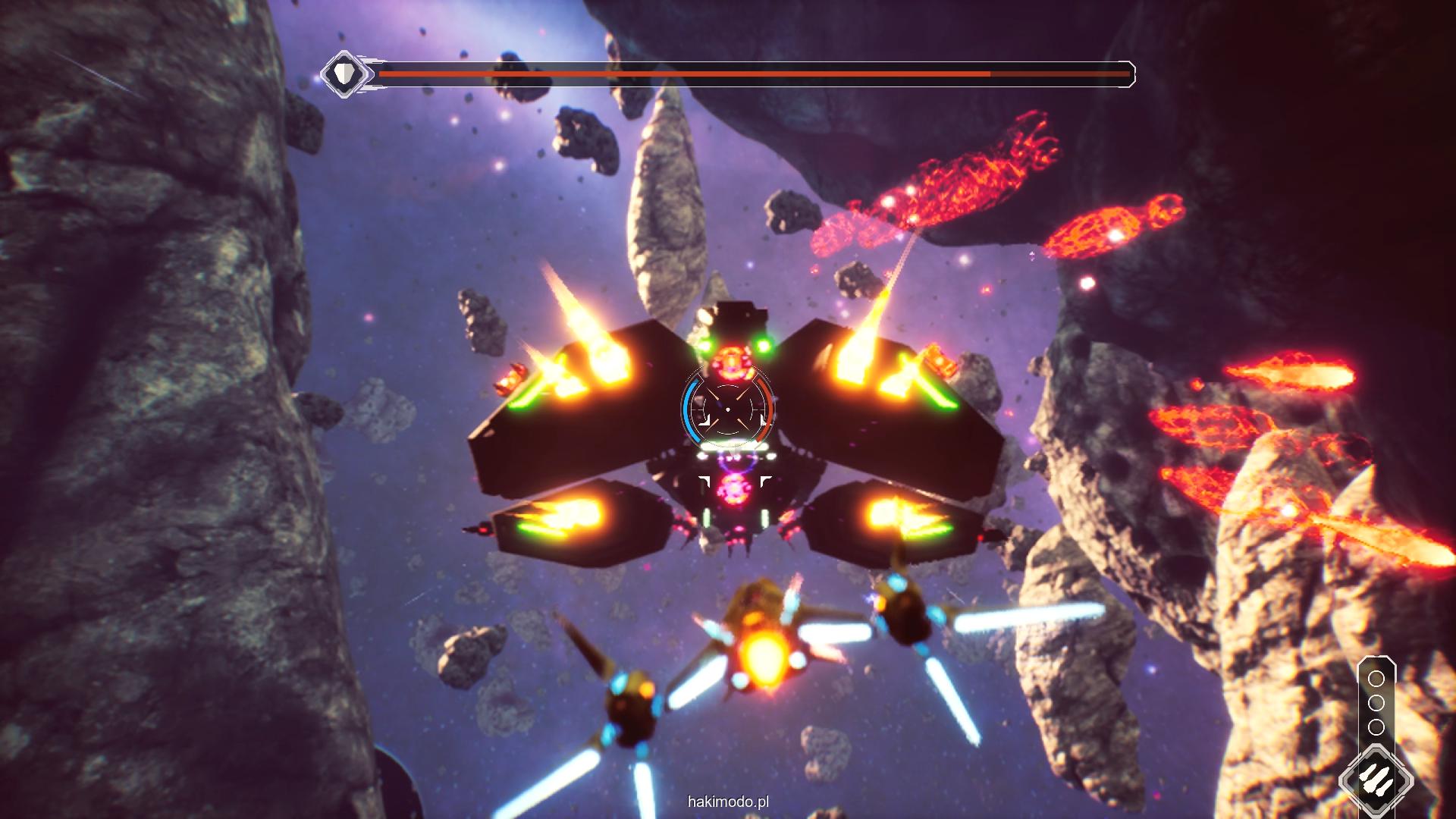 Upon closer inspection, Redout: Space Assault has more in common with Star Fox 64 than modern gamers will want to see. Those polygons!

From the silent splash screen to the menu, the oversized mission options give me the impression of a touchscreen interface even though I am using a KB&M. After selecting the only campaign that I could, Redout: Space Assault brings me to a screen where I can select a ship. The game offers different options in name only; speed, hull (HP), and weapon power are uniform across all designs, leaving palette swaps as the only distinguishing characteristic between them. It is possible to upgrade ship specs by using the points earned, and coins collected during missions, but I could not really tell if my upgrades made a difference in performance. 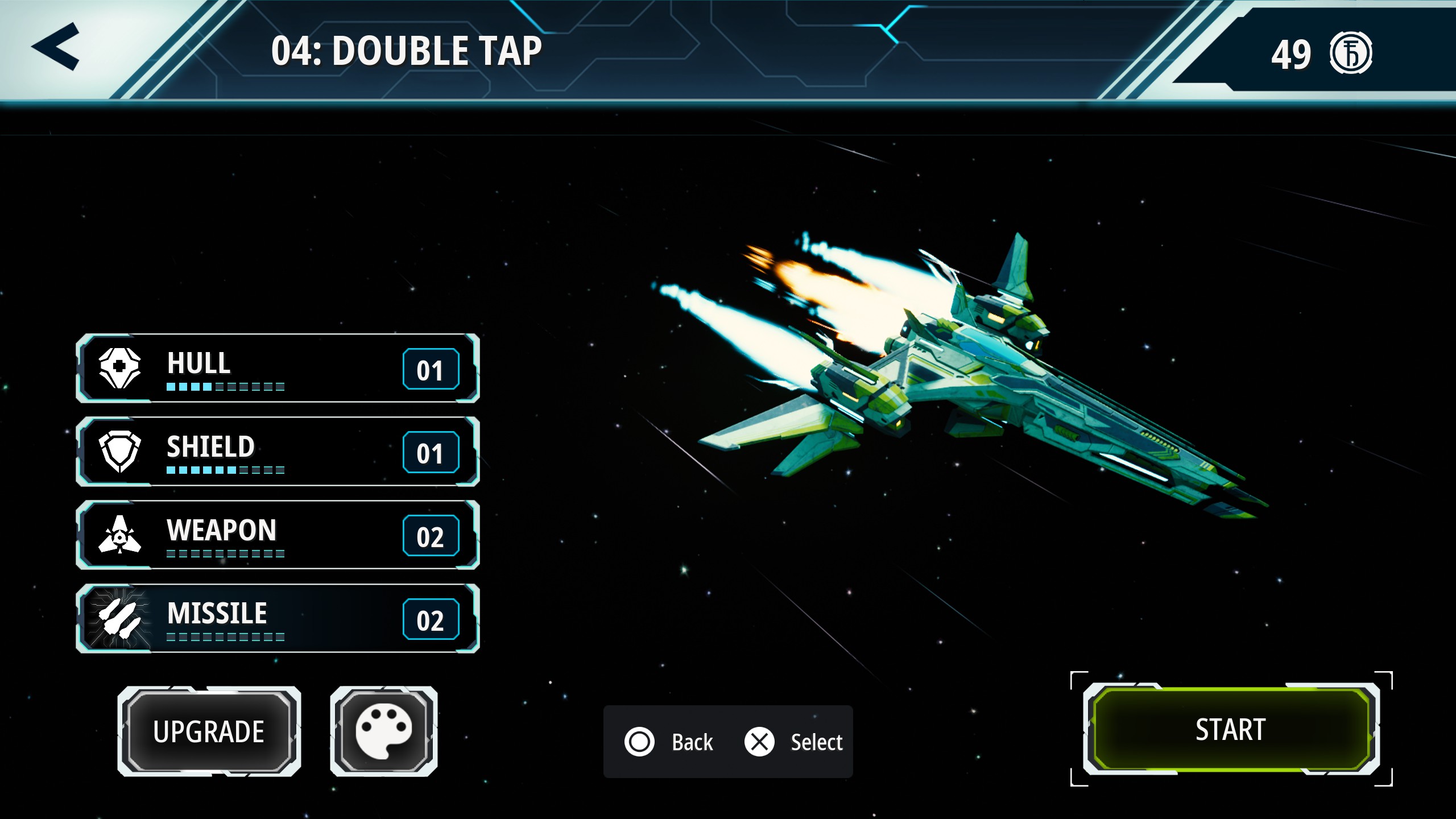 In this bare-bones ship screen, I upgraded my guns and missiles to level two. Did anything change? I am not sure.

34BigThings attempts something of a narrative supposedly justifying how they have grouped individual missions within a campaign. “Forgettable” is an inadequate description, because that would suggest something—anything—was worthy of committing to memory at all. If a cohesive story exists, it suffers from Redout: Space Assault‘s lack of attention span. The average length of each mission is less than three minutes, with every mission ending right before establishing any momentum. 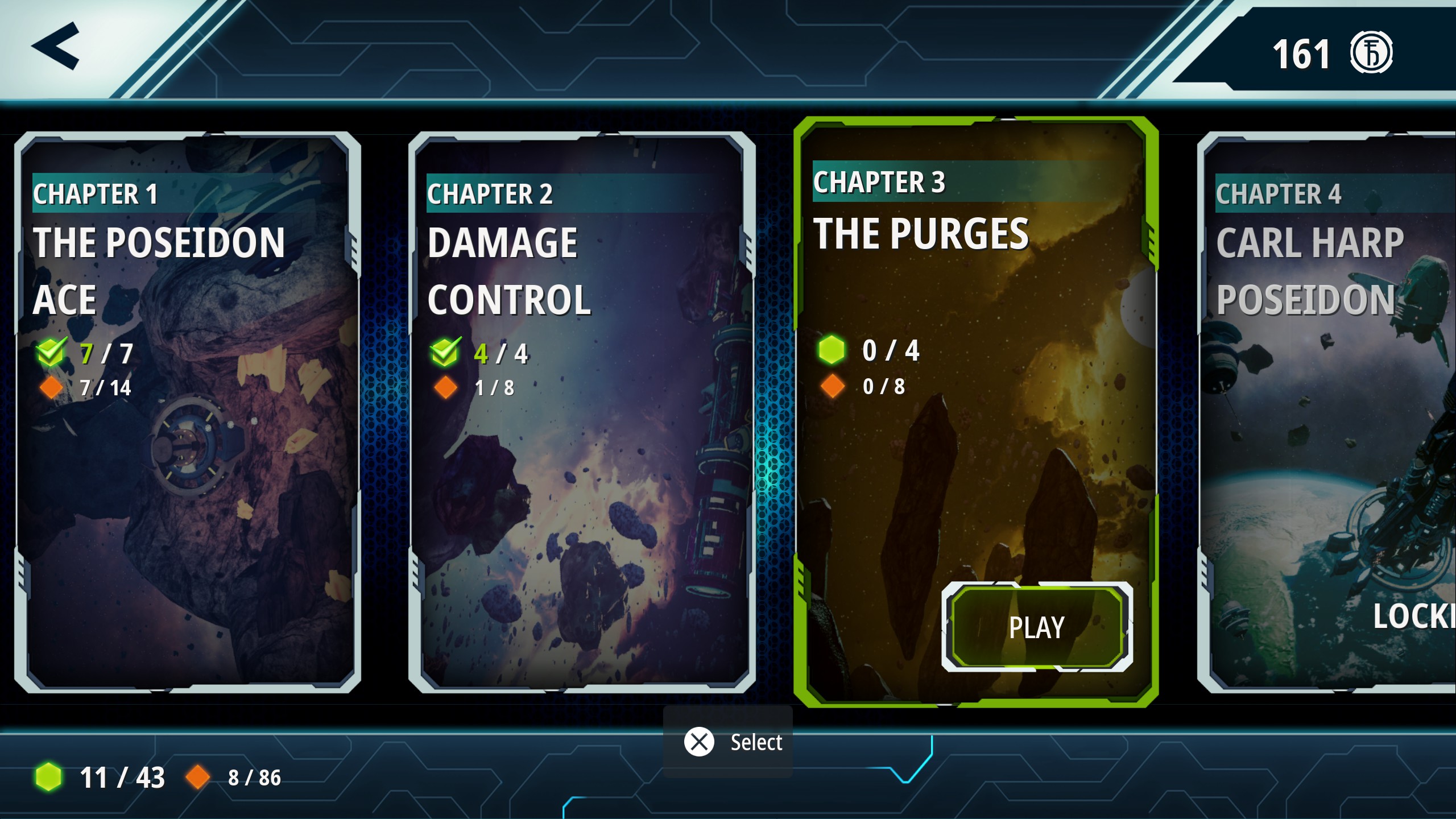 High-resolution menus do not need icons this large. They have been scaled to fit larger screens.

These bite-sized tasks might be appropriate on mobile for people who desire to play something simple for a few minutes during a lunch break, or a wait at a bus stop or carry-out restaurant. Playing on PC, however, it would have been better to fuse every mission in a campaign into one long mission for cohesion and pacing purposes. 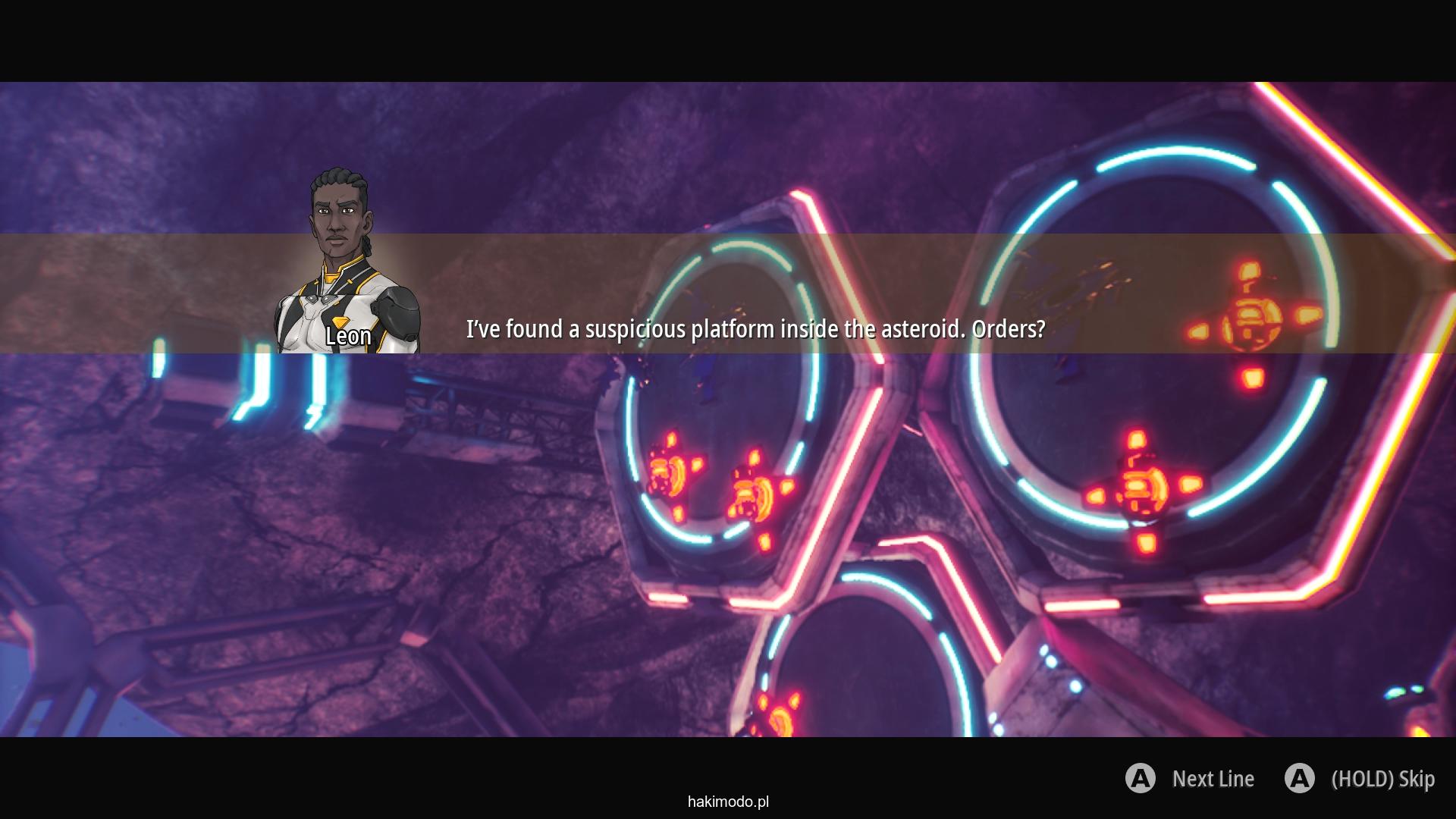 In terms of gameplay, the pre-alpha footage promises a game that allows for free flight in space. Players will spend the majority of their time on rails, in a budget mimicry of Star Fox 64. While auto-aim for guns can be disabled in the options menu, the limited, generic enemy craft did not provide me incentive to do so, while missiles reload fast enough to fire constantly. Least immersive of all, missions that allow for free flight are non-combat search missions, with the exception of a boss fight against a corvette-class ship where I died numerous times without penalty. SHMUPs are games of skill and high scores, but it seems that Redout: Space Assault is a game that lacks focus, purpose. 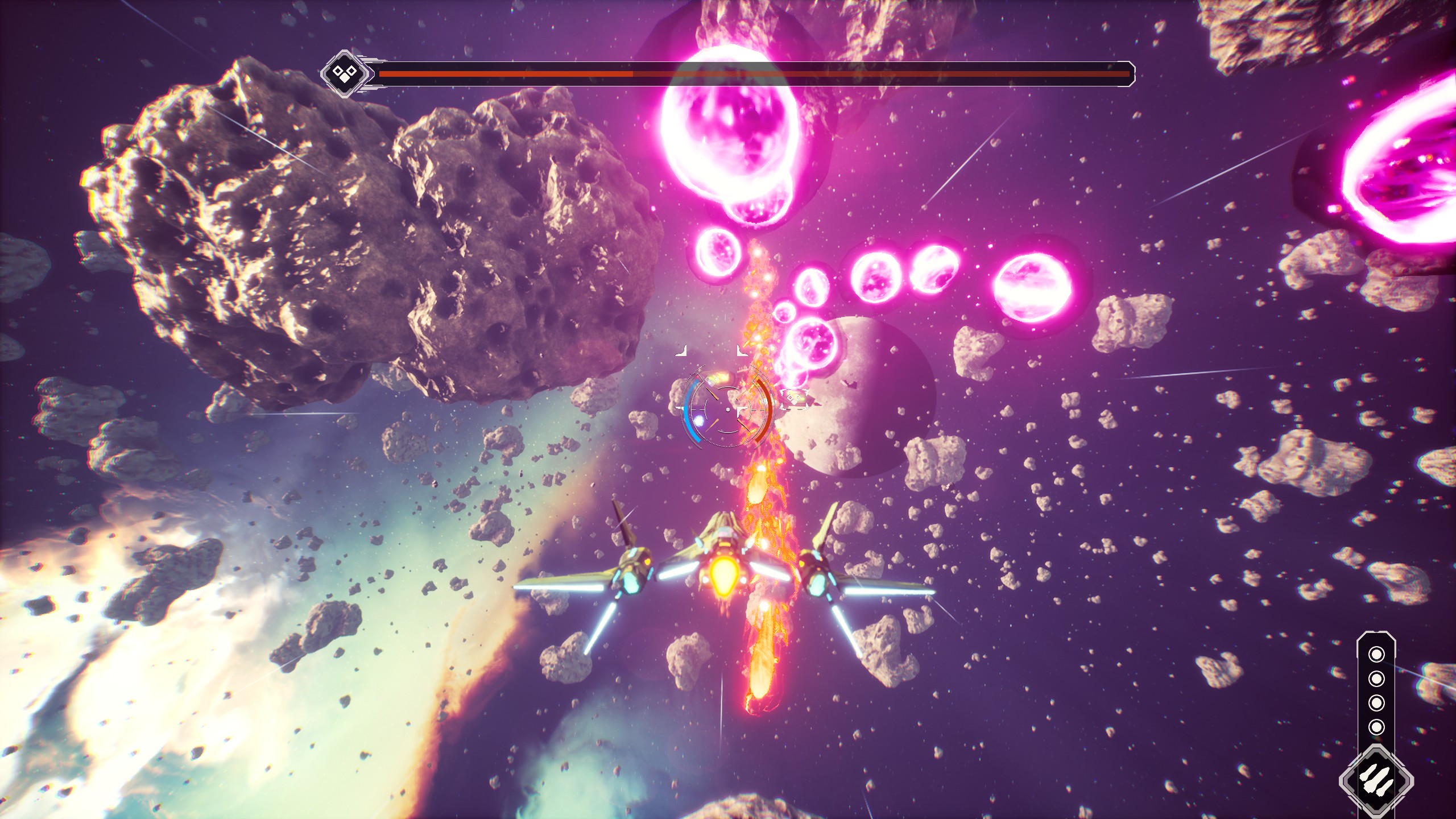 There might have been a clean way to defeat this boss besides sheer attrition. Providing me with infinite lives suggests that the developer might not have provided one.

Worst of all—no, thankfully, I encountered a game-breaking bug that spared me from further investment in this mediocrity. Soon after the start of chapter 3, the camera is supposed to give chase to the player’s ship to maintain a 3rd person perspective. Instead, the camera destabilizes, failing to pan in the correct direction so that I can shoot the enemy ships. Because the camera never reestablishes itself, the mission cannot be completed. Because every preceding mission is a prerequisite to unlock the next, I cannot advance in the game because of this bug.

If I could play more than a couple of chapters in Redout: Space Assault, I would have attempted to see it through until the end. But even if the game-breaking bug managed to resolve itself, the low-resolution textures, flat plot, and banal gameplay would remain. I had big hopes for this game, but it is a tragic bullshot. 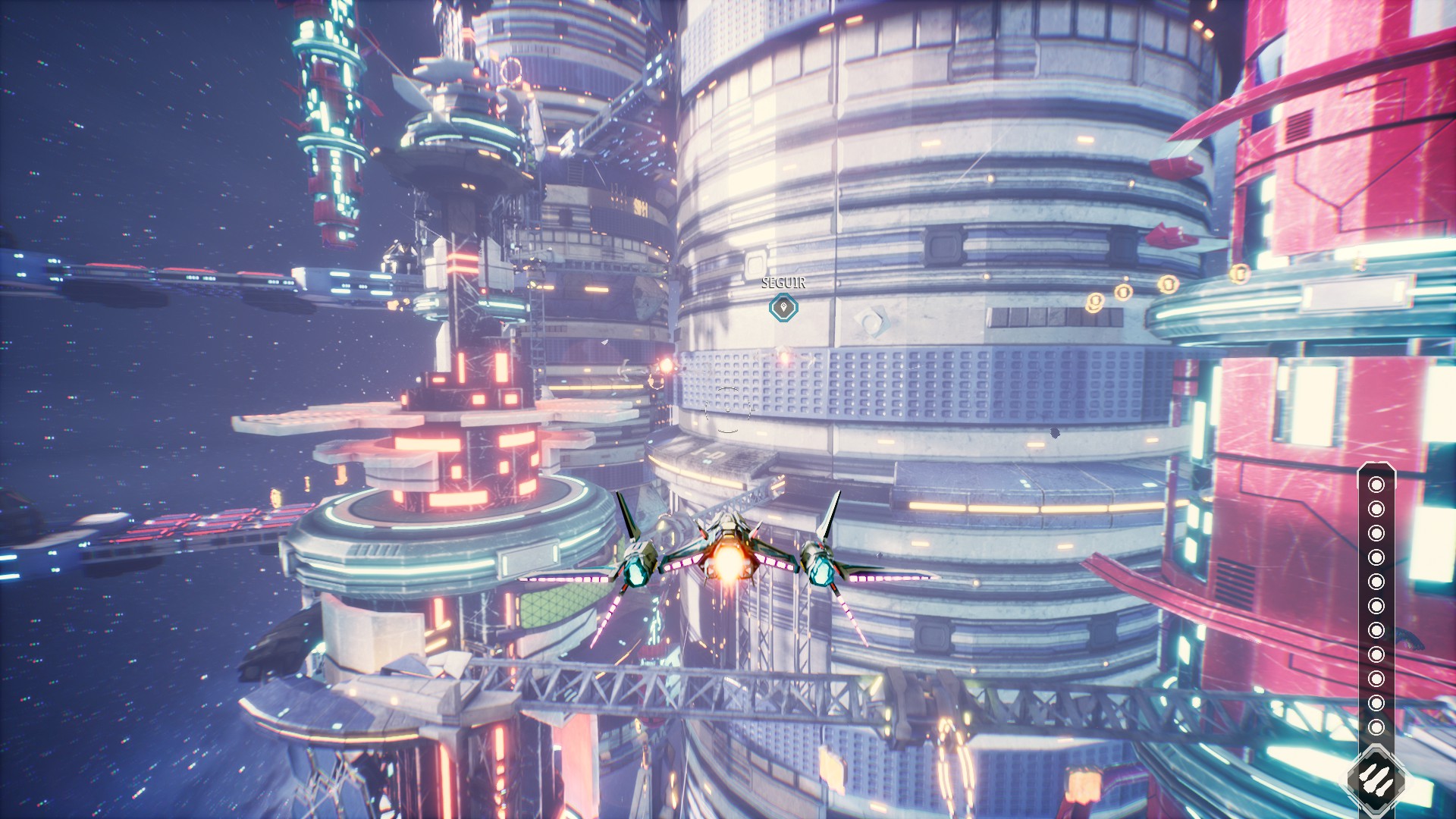 A bit of what could have been combined with what actually is.

Redout: Space Assault's mobile game roots sabotage what could have been.