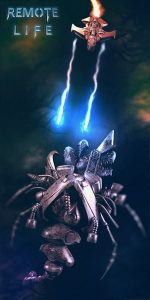 Remote Life is another game that I encountered through my Steam Discovery Queue, catching my attention with pre-rendered graphics that reminded me of games like Donkey Kong Country and Oddworld: Abe’s Exoddus. Only after finishing Remote Life did I do my due diligence by locating the press kit; therein, I learned that this game is a passion project. Mario Malagrino has spent three years working on Remote Life, hoping to create a game that would put a smile on gamers’ faces like games of the past put on his. 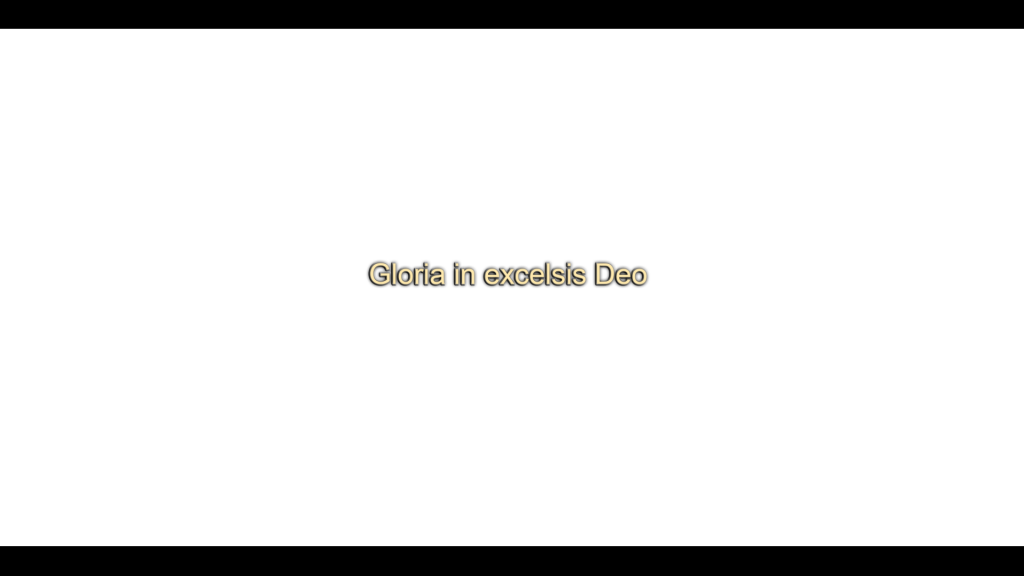 I had to take a screenshot with the print screen key and paste to MSPaint.

Traditionally at Geeks Under Grace, this space is reserved for content that might cause a Christian to exercise her or his discernment as to whether or not they should consume the media that we are reviewing. Remote Life is a relatively clean game, with minimal instances of blood so tiny and infrequent that it is as negligible as the single utterance of “s**t” during the ending.

I suppose Remote Life could be nightmare fuel for those sensitive to biomechanical imagery. Also in this .gif is the A-weapon Laser Gun.

What I would like to highlight here is the absolute certainty that Next Game Level, or Mr. Malagrino, is a Christian. Before a title screen or logo of any sort is the message I have included above, “Glory to God in the highest!” in Latin. That is AWESOME! 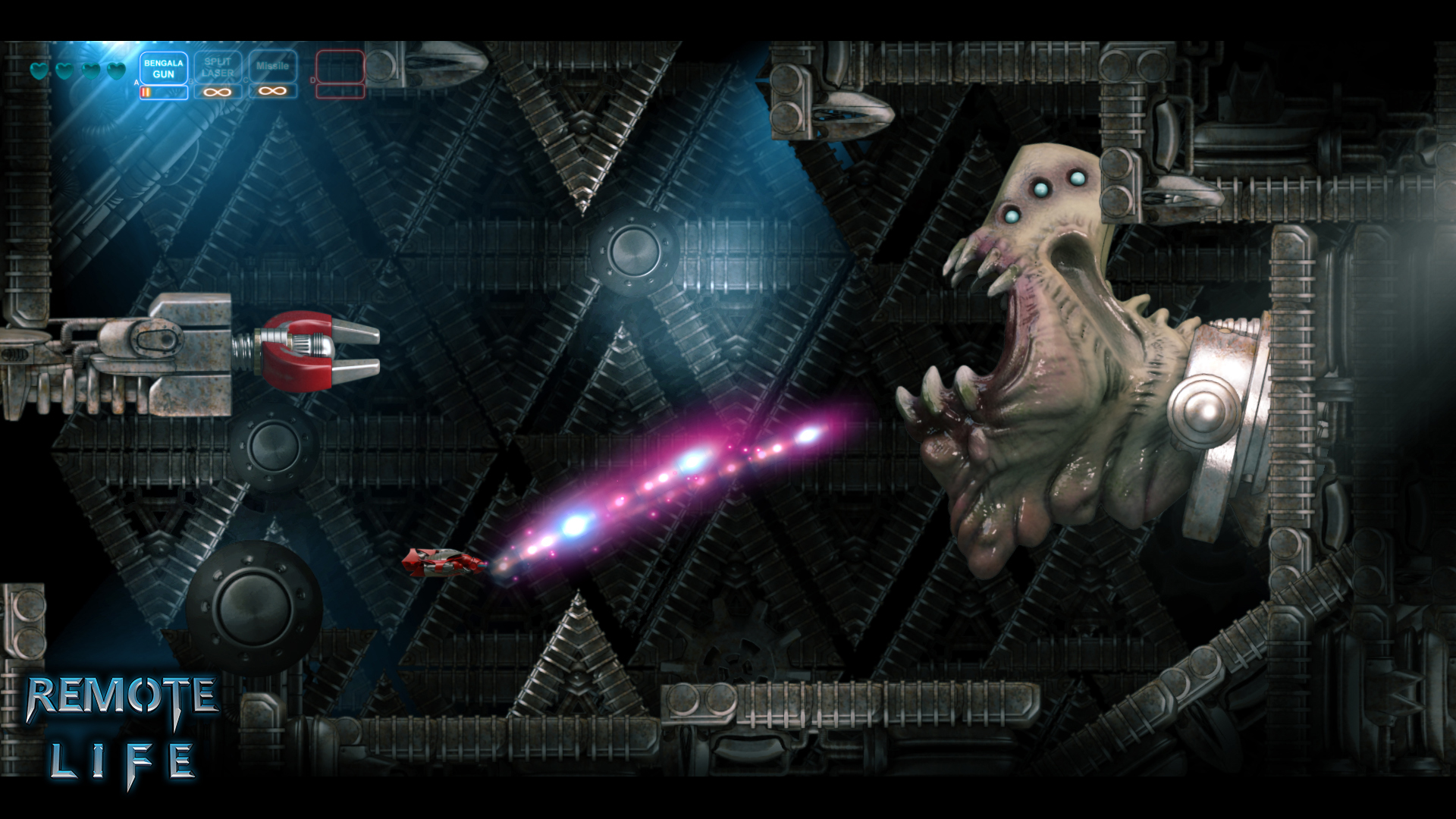 The A-weapon Bengala Gun is beautiful in action. The visuals are among  Remote Life‘s strong points.

A massive, space station-devouring alien mothership approaches. An attempt to intercept it by teleporting a vessel inside fails, so it is up to ace pilot John Leone to approach it from the outside and fly toward the center. Though the press release suggests that players will discover the reason why the aliens are attacking, I did not notice an explanation, but instead, cliché scenarios such as a stranded pilot mate or space command offering no backup. While I do not expect my SHMUPs to feature groundbreaking stories, I at least expect a promise to be kept.

On display during this boss type is the C-weapon Plasma Gun, followed by the base C-weapon missiles after exhausting the plasma ammunition.

The gameplay wrinkle that Remote Life has to offer to differentiate itself among other SHUMPs is its three-tiered weapon system. This breaks down to an always-active A, B, or C option plus one super-weapon. A-weapons are the most linear, providing precision; B-weapons deliver a spread effect to hit more targets; C-weapons combine spread with amazing power, though the base C-weapon, missiles, are disappointingly neither strong nor accurate. The power-ups for this weapon are a sufficient apology for this inconsistency.

The Comet Gun is so rare, that I cannot remember if it is a B or C-spec weapon. Regardless, behold its screen-slaying particle effects!

C-weapon X-Shot lays down some seriously thick fire, making it one of my favorite weapons in the game.

B-spec weapon Hailstorm Gun is also rare. In other words, the strength of a weapon is directly proportional to its availability.

Understanding these general rules empowers players to manage appropriately the ammunition that power-ups provide according to the dangers encountered. Universally, I used B-spec weapons the most, because they seem to maintain surprising levels of DPS while also being the most common pickup. A-weapons feel the weakest, while I try to save C-weapons for blowing up bosses with the quickness.

I at first hated the B-spec weapon Spread Gun, but then I learned that I needed to give it buffer space to spread all over the screen.

SHUMPs tend to be only as exciting as weapons to use and the enemies to shoot. Every level in Remote Life offers plenty of weapons through the A-B-C spectrum for use; I have indicated some of the more satisfying loadouts above. Enemy designs are particularly spectacular, channeling a strong H.R. Giger influence through their biomechanical fusions. Even the way that friendly ships are equipped with lights to illuminate the darkness of the textured tunnels reminds me of the Aliens franchise.

If the environmental organic matter and machines are not atmospheric enough, the giant insectoid enemies are sure to catch the players’ attention. With his non-existent marketing budget, Malagrino has done well to promote Remote Life‘s pre-rendered 3D models, as they are indeed one of the game’s highlights. Though he has included 16 and 8-bit modes through the options menu, I believe he had already succeeded in reproducing a retro, arcade-like experience in the age of HD through both the game’s default presentation and its demanding difficulty.

Thankfully, Remote Life is structured such that one need not play through its seventeen levels with a single “continue”; instead, it is played one level at a time. I frequently restarted levels within the first thirty seconds because I would lose three out of my four lives that soon due to neglecting the legion of stage hazards. I welcome a good challenge, yet I was grateful for the change of pace that escort missions (yes, you read that correctly—Remote Life makes escort missions FUN) and especially exploration missions offered; I would welcome more of either than the slow automatically side-scrolling levels through almost bullet and obstacle hell.

I would have loved to play more of these free exploration missions. What a fantastic change of pace they offer!

I suspect that Remote Life‘s greatest flaws stem from the fact that a one-man team produced the game. The music and sound design are generally passable, but the Text-to-Speech robot as a substitute for voice acting is excruciatingly bad. Grammatical errors compound Malagrino’s localization struggles.

“Escort mission” is generally considered more profane than the F-word in the video game industry. However, here, they are a fun change of place from missions where YOU are the only target.

Lacking a basic feature like a pause button is so disconcerting that I played through several levels before I realized that trying to pause would return me to the main menu. Too many times did I restart an entire level on accident, or on purpose because real-life obligations required my attention. On the other hand, this soft reset is useful after finishing a boss because upon beginning the next level, health/lives do not refresh. Especially surprising is how Malagrino managed to bypass Steam integration features such as the Shift+Tab overlay and the ability to take screenshots.

The arcade-feel of this game is unmistakable.

I take great pride in taking my own screenshots, so the lack of proper Steam integration is shocking in 2019. At least Malagrino is forward-thinking; making progress through the game unlocks lots of bonus artwork, some of which I have included in this review to give our readers an idea of what to expect from Remote Life. The availability of these assets alleviates some of my frustration, but the combined “misses” in this game make it clear that Malagrino is not yet Thomas Happ. Still, Remote Life is an impressive showing for what one man has done by applying his “day job” rendering skills to a recreation project. I am particularly proud to see those who serve the Lord in video game development!