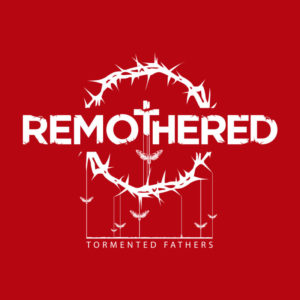 Out of the creative mind of Chris Darril comes a horror game unlike any other. Taking inspiration from Silence of the Lambs (the main character is a spinning image of Jodie Foster) and games like Silent Hill, Darril built a concept of Remothered at a young age. Slowly, the game took form and became what it is today. Partnering with the Italian game developer Stormind Games, Darril officially announced Remothered in 2016. It came to PC in January 2018.

Now, Remothered has a strong following, driving it to become a trilogy, with the second entry releasing on all current platforms in the Summer of 2020. But when the game originally appeared, it received much praise, earning dozens of awards. It even reached the ears of Keiichiro Toyama (creator of Silent Hill) who endorsed it on Twitter and voiced his desire to work with Darril in the future. All of these spotlights earned it a port to the Switch. The game is good, but does the transition to the Nintendo console tarnish its reputation? 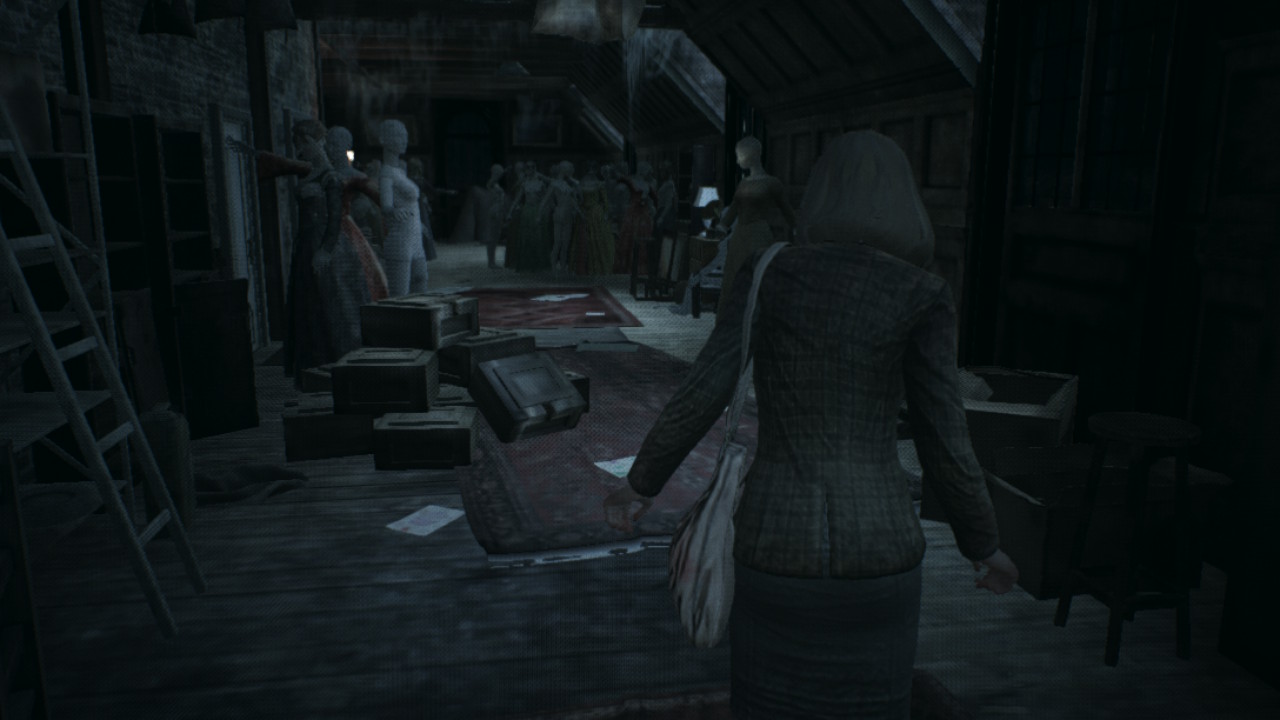 Violence: This is a gory horror game and it leaves little to the imagination. Prepare to cringe, wince, and say “ugh” to the screen as Rosemary Reed dies to the hands of her stalkers. Every time she is caught, if the player does not react in time, her gory death is shown, which is usually some sort of menacing weapon being stabbed straight into her head. Some bodily torture and dismemberment takes place, along with plenty of gore and blood. Some characters are burned alive and the camera does not pan away from graphic scenes such as these.

Drug Use: Rosemary Reed smokes cigarettes briefly before entering the mansion. There are plenty of prescription drugs abused by some of the characters in the game. Hypnosis and hallucinogenic drugs are shown and used.

Language: Horror movies and games tend to come with plenty of cursing and profane language. Remothered is no exception. Stalkers and enemies to Rosemary can be frequently heard calling her a “b*tch.”  “D*mn,” “f*ck,” “sh*t,” and variations of these words are screamed and shouted throughout the entire game.

Nudity: The bare rear end of one of your captors is shown.

Sexual Themes: There are hints of an LGBT relationship, but it is only implied, not directly stated.

Religious Themes: In Remothered, there are paintings hanging on the walls that have religious icons, like a lamb and a virgin. There are also statues of Mary holding Jesus throughout the mansion. One of the enemies that stalks Rosemary continuously repeats the Lord’s Prayer as a voice line. Jesus and atonement of sins are spoken about in the game. A cult of nuns is referenced as well.

Negative Themes: The game is meant to strike terror and anxiety in the person playing, which can be psychologically troubling if the player is not prepared or accustomed to such graphic content. Other themes like suicide, abusing drugs to cope with PTSD, and physical abuse are also touched on.

Positive Themes: Despite so much negativity, the game has redemptive value and will occasionally give the player a moment to rest and take a breather from the constant evil that is thrown at them. The themes of love and forgiveness seem to be hiding behind a large wall of maliciousness. 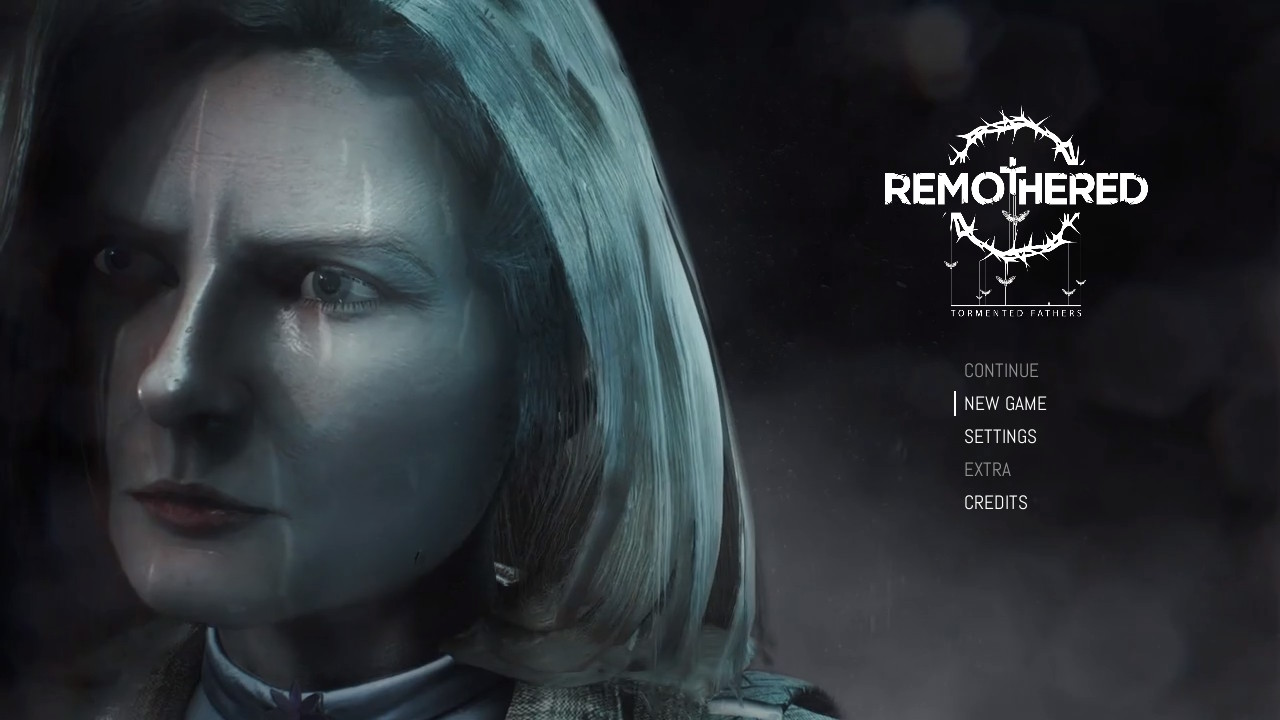 The best way I can describe Remothered is by calling it a mix between a 1990’s suspenseful/thriller and a cultish horror flick. Eerie cults, mental illness, bad family histories, and forgotten memories all mesh together to create an exceptionally troubling tale. The story is enthralling will pull players in from the start. Plot points here and there can be confusing to follow, since many are connected to objects found throughout the game. If the player misses some of these observable objects, cutscenes may end up not making sense.

Horror stories are only as good as their twists. There needs to be a reason for such heinous evil and tremendously distorted vision. Oftentimes, the villain will be suffering from some sort of mental illness or they will seek revenge for some past transgression. Remothered does not disappoint with its own twists. What I appreciate most about the game is its continuous flow and constant story progression during gameplay. Plenty of games struggle with combining gameplay with story, often favoring one over the other. Remothered meshes the two together and does it well. 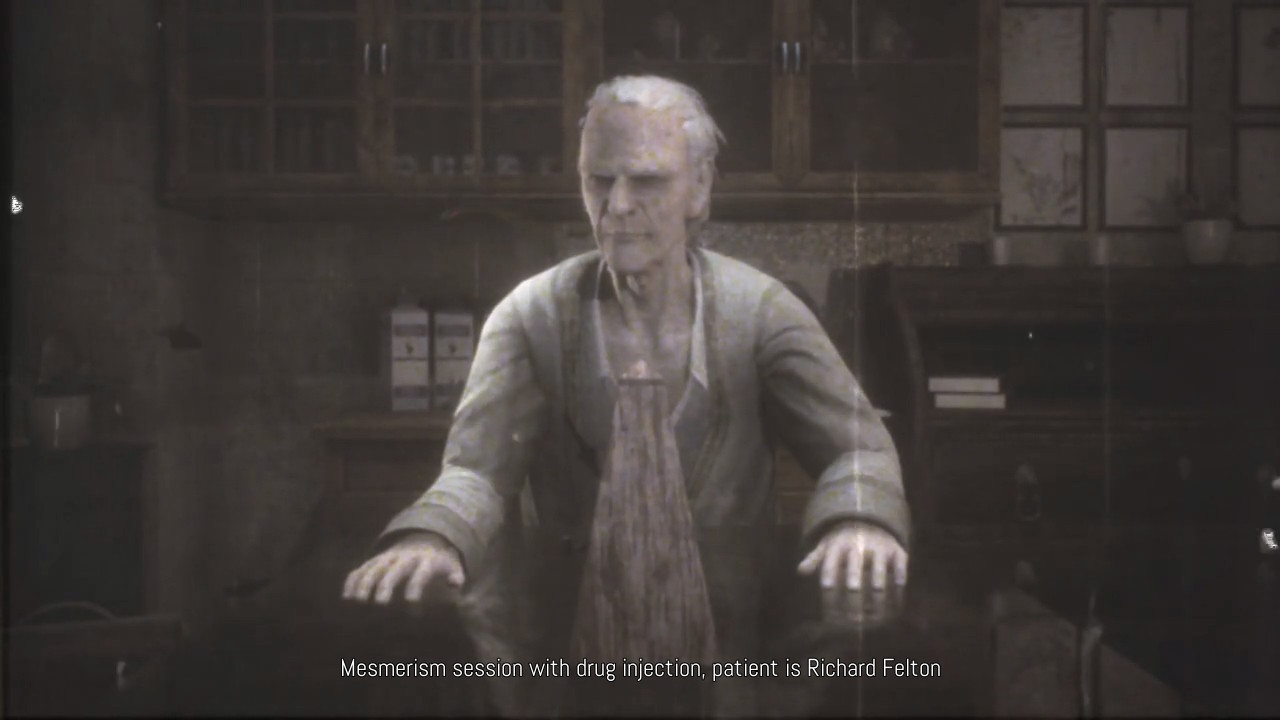 Speaking of gameplay, some things work, others do not. The main character, Rosemary, must sneak around an old mansion, searching for clues about a missing young woman named Celeste. Several characters stalk her throughout the game, a similar feature found in  Outlast or Alien: Isolation. In the mansion, there are plenty of places to hide, including inside wardrobes or under benches. Rosemary can also pick up bottles, clocks, and music boxes to be used as diversions. I rarely used this mechanic, as I would often simply sneak around and hide when nearly found. Most annoying though, was that suddenly, the game required me to use this diversion mechanic at the end of the game, after not having to use it throughout my entire playthrough.

While you sneak around, the stalkers will make noise and progressively get louder as they get nearer to you. The unsettling soundtrack will also grow more intense as they get closer to finding you. Once they find you, a shrill violin sound is played, and the player-character will exclaim that they’ve found you. This happened to me several times, making me jump three feet off of my chair, especially when I had no idea where my captor was. The suspense and thrills in Remothered have a thickness that can be cut with a knife. I found myself holding my breath, whispering to myself, “I’m dead! I’m dead! I’m dead!” often. Any horror game that can successfully execute this tension is doing its job well. 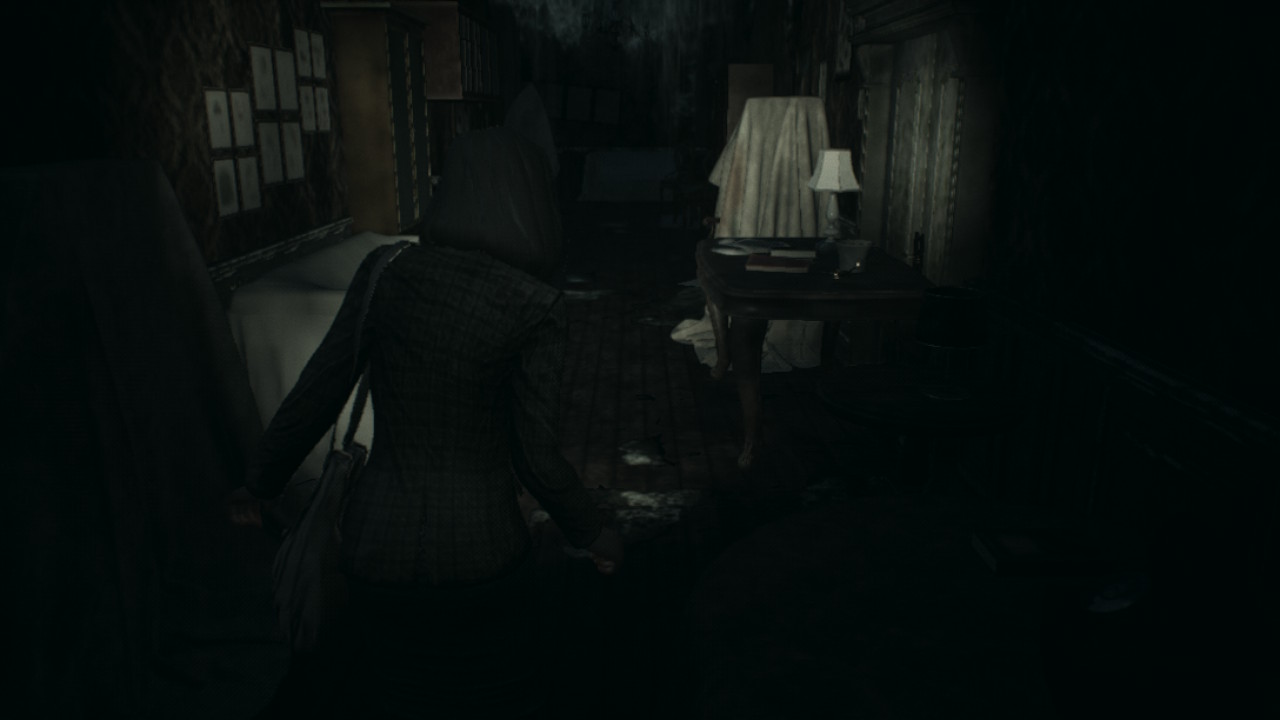 Rosemary can take a breather at side tables that have mirrors and pendulums on them. She can also restore her health; she sustains about 4-5 hits from an enemy before being murdered. As she takes damage, she will walk and look different, similar to how Leon’s stride will change in Resident Evil as he sustains hits and bites. Make sure that Rosemary always has a weapon besides the diversionary items. In a last-ditch effort, before the final blow, she can use the weapon she has equipped at the moment to stab her attacker and flee. Once she uses it, she loses it and must find another weapon. If she has no weapon, a death cutscene ensues. 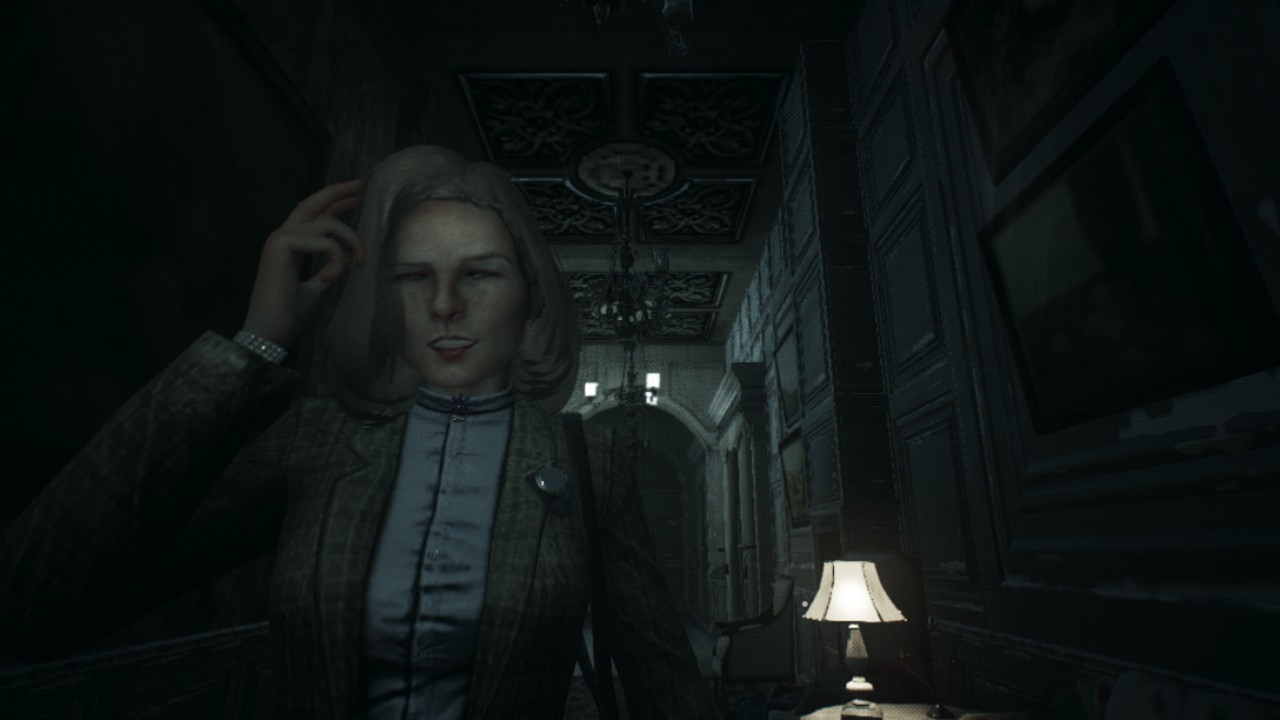 Saving/Restoring health at the pendulum

Puzzles exist in this Remothered, and they take the form of fetching items. The only way to move the story along is by completing said puzzles. One puzzle requires you to unclog a bathtub to figure out what’s inside the drain. What unclogs a tub? That’s right, a plunger! I appreciate the simplicity of this game. Some games will require the use of random items in ways the player would never think of using unless trying all possible solutions or combinations. Remothered does not do that. That being said, there was one puzzle I found annoying and I angrily had to look for the solution online. The handle that I needed to open an oven was simply on a high shelf. All I needed to do was shift my camera up. And this was the only puzzle in the game that required me to look up—unnecessarily frustrating.

Remothered‘s spook factor is high among other horror games I have played. It’s comparable to Amnesia, among the other horror games I have mentioned. There were moments in which I was legitimately fearful and had Rosemary running for her life down what seemed to be the longest hallway ever created in a video game. What I appreciate most about this game is how it will change rhythms from being exploratory to escaping to sneaking. Its structure works well, having one lengthy primary section, which serves as a good way to solidify the player’s understanding of the gameplay mechanics. After that first part, the game has smaller sections, which keep it fresh. 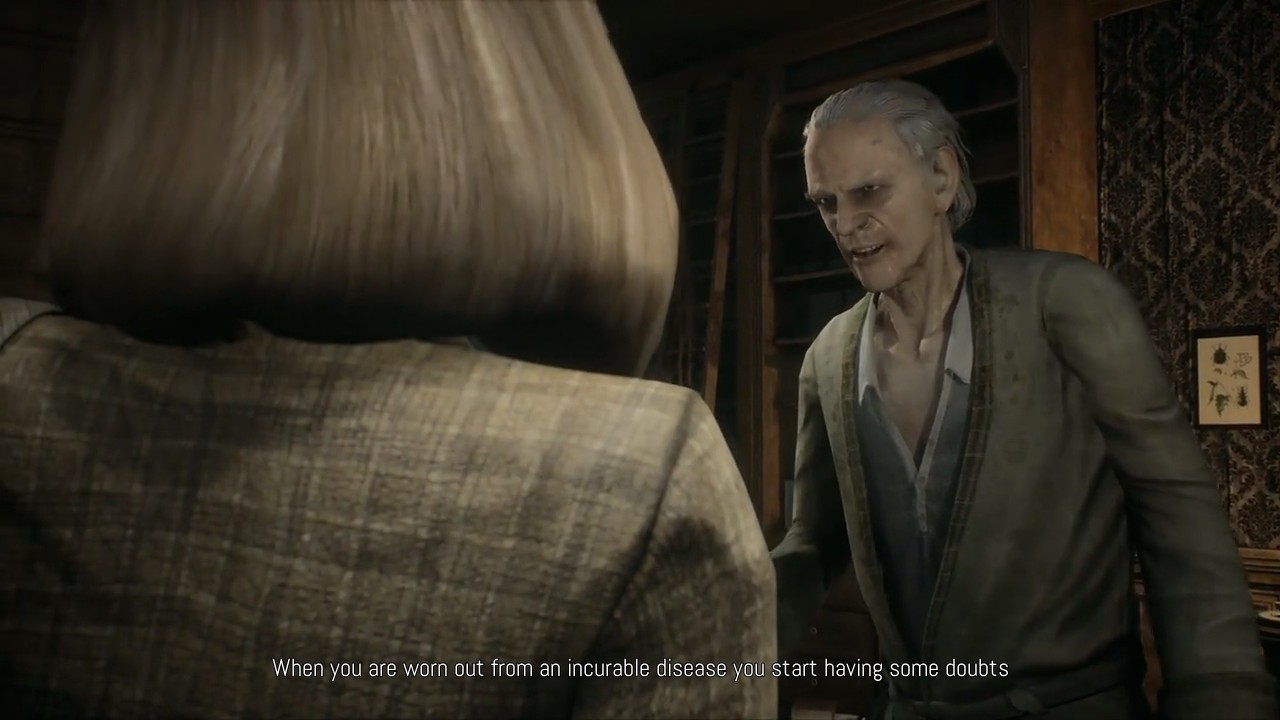 Unfortunately, the graphics are horrible. They are so bad, the gameplay suffered because of it. Frames would catch, lag, and everything would hesitate. Some cutscenes seemed incomplete and would sometimes glitch out, making the transition from scene to gameplay rough. Glitching also happened during sudden movements during cutscenes, like when something would catch fire. Some death scenes ended in a glitch or looked silly. Again, after dying, the game would sometimes get stuck and fail to restart from a checkpoint. I frequently had to pause and exit to the main menu in order to begin again.

Apart from this, I enjoyed the constant environment change and progression. As the story continued, new areas became available in the mansion; it was not always the same three floors. The soundtrack, composed by Luca Balboni, adds great mood and atmosphere. Sometimes, no soundtrack was present, would add much to the mood as well. What’s worse than eerie music in an eerie mansion? No sound, other than the character’s footsteps and breathing. 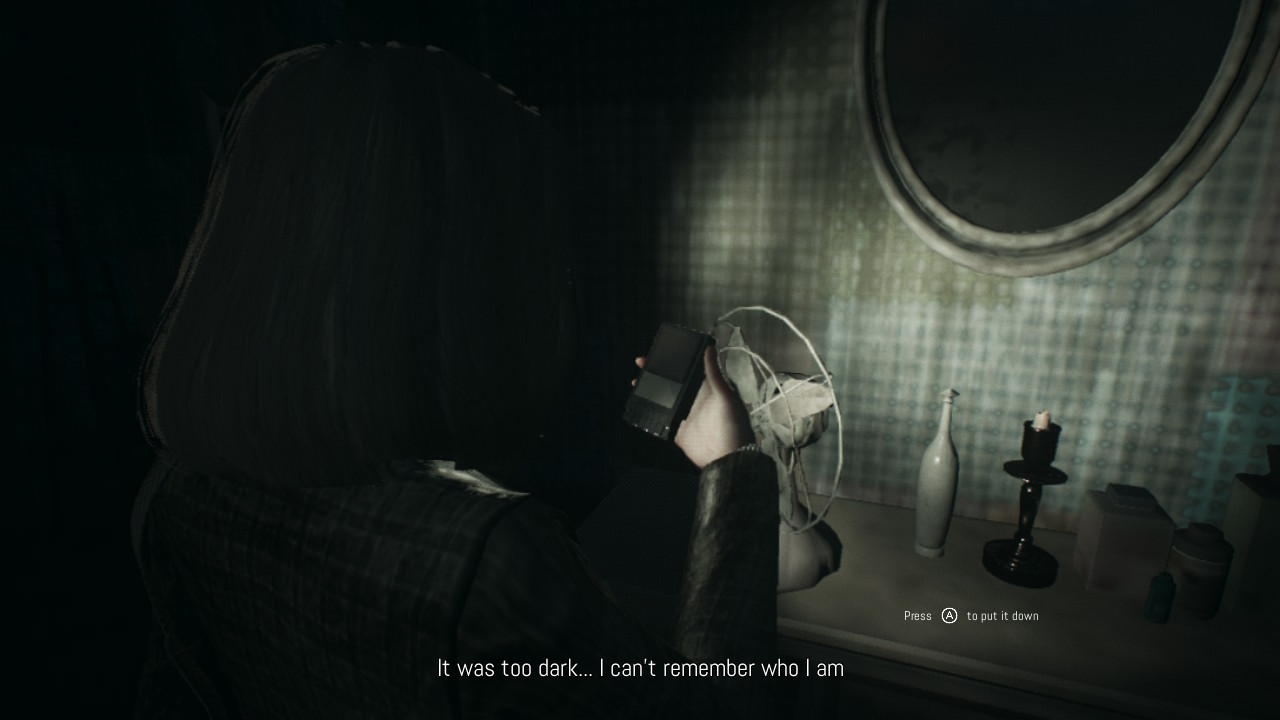 Remothered is a horror story well done. But due to the graphic issues, I decided to give this switch port a five out of ten. If you’re willing to be frustrated with troublesome frame skips, unviewable cutscenes, and having to forcibly exit levels after dying, buy it on the Switch. But I highly recommend gamers who want the best experience to buy this on PC.

Update: On October 21, 2019, the developers released a patch for Remothered that was to fix graphic issues and bugs. While graphics due indeed look better and glitches are gone (no more limbs showing through doors), some cutscenes are still completely unviewable. This patch does little to the Switch port and these issues should have been addressed at first launch of the game. My score remains unchanged.

The graphics on the Switch version are annoying enough to pass on this port; I strongly recommend this game for the PC.