RetroMania Wrestling is touted as “The official sequel to WrestleFest,” though they use the term “sequel” very loosely, and the game could perhaps be considered more of a spiritual successor to the ’90s arcade classic. While the original release is sort of beyond my time, I find myself wondering who out there was clamoring for another one. As a lapsed wrestling fan, I enjoyed my time with RetroMania, but there isn’t much here for me to urge current fans to pin down a purchase.

RetroMania Wrestling includes the sort of content you’d expect out of the sport. Characters punch and kick opponents with the ability to throw their opponents and put them in submission holds. Items such as chairs are located outside the ring, with the option of players to use them against their opponent. In the story, wrestlers insult and threaten one another. The story suggests that a character was put in the hospital with a severe injury that nearly ended their career. An image shows one wrestler physically assaulting another. Lastly, one of the arenas looks like a heavy metal-themed hellscape. 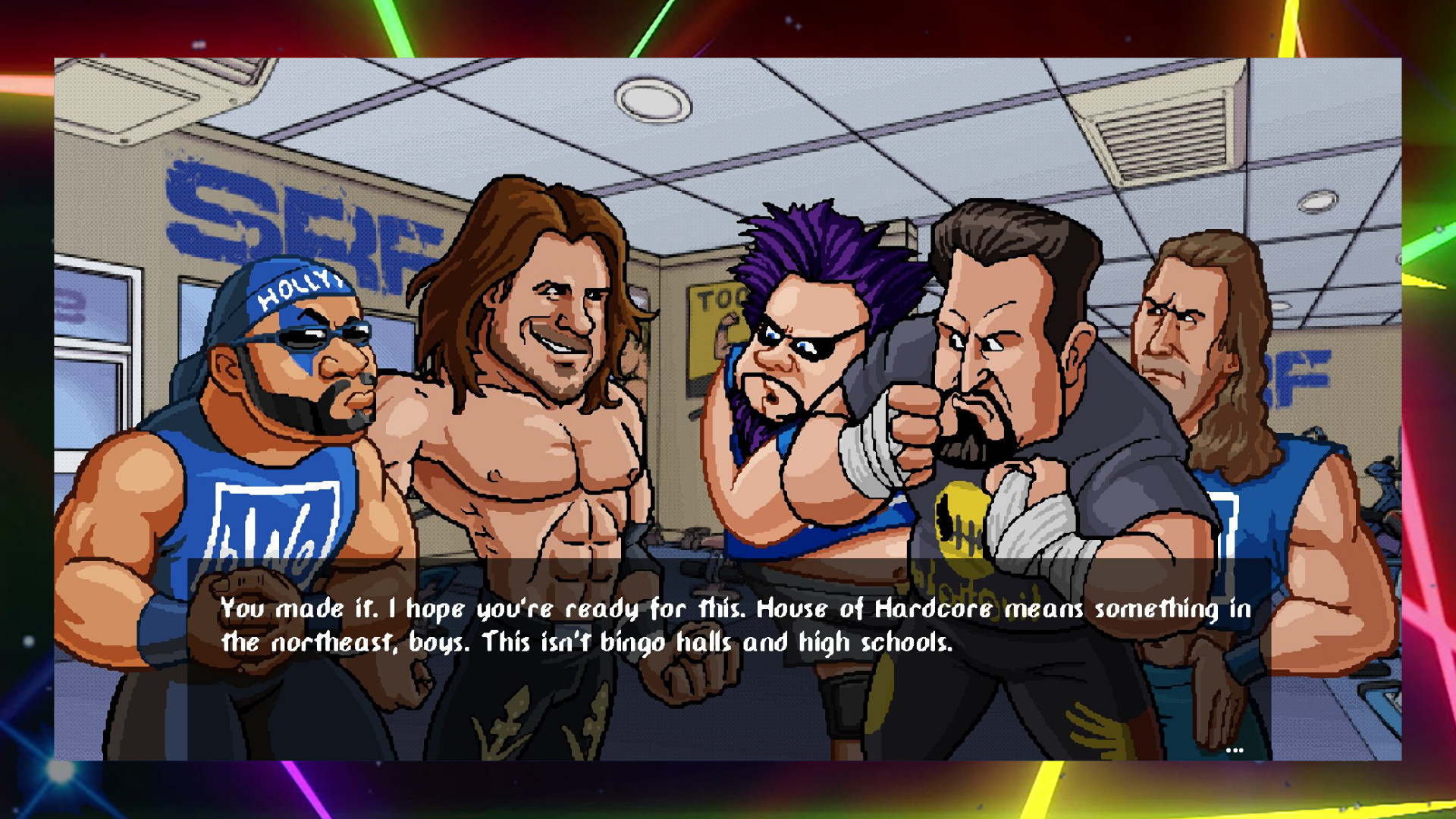 RetroMania Wrestling comes out swinging but misses the mark in some significant ways. In terms of gameplay, it’s probably one of the more fun wrestling titles I have played in a while. Its retro presentation is strong, especially in the visual department. However, this is a game that feels marketed to a specific age bracket. Likely, your favorite wrestlers aren’t in this game. For me, there was a bit of history to be found here, but primarily not the kind I fondly remembered.

Let us begin with the roster. The present “legends” in the roster are mostly obscure. However, more notable names are Tommy Dreamer and the Road Warriors, Hawk, and Animal. In the realm of obscurity is the stable of the Blue World Order: Blue Meanie, Stevie Cool, and Hollywood Nova. From the modern era, we have wrestlers such as John Morrison, Zack Sabre Jr., and Warhorse, to name a few. I can’t list the entire roster, but it feels as well-rounded as they could get, especially when the most prominent names are inaccessible. 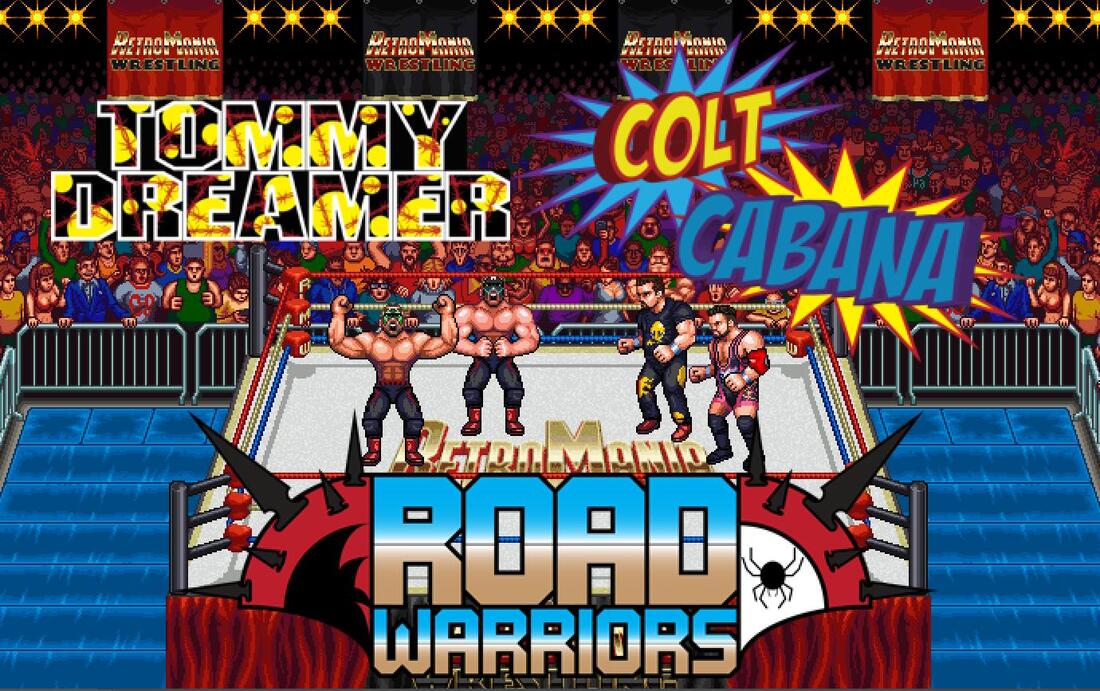 You’ll find various modes and match types to wrestle opponents within, but the highlight is the story mode. You play as Johnny Retro (Morrison) as he gets back into the wrestling game after suffering an injury from Zack Sabre Jr. that nearly ended his career. Still-frame images and dialogue boxes tell the story between each match, with a few dialogue choices sprinkled in. Those choices don’t affect much in the long run but might change who you have on your side in the next match. In one instance, I destroyed Tommy Dreamer in the ring, but then later made amends and had him as a tag partner in a later match. I didn’t expect to see a story mode included and imagine that it was a lot of extra work for this small team to get one into the game.

The other gameplay mode I spent much of my time with is called 10 Pounds of Gold. You’ll work your way up to a title match against Nick Aldis, then eventually defend it in a rematch. I can best compare 10 Pounds of Gold to an arcade ladder you’d find in a fighting game such as Mortal Kombat or Street Fighter. This mode is likely the one that mirrors the original WrestleFest with its particular format. It is an easy way to get into the action, especially if you don’t care for all the dialogue of the story mode in between matches. 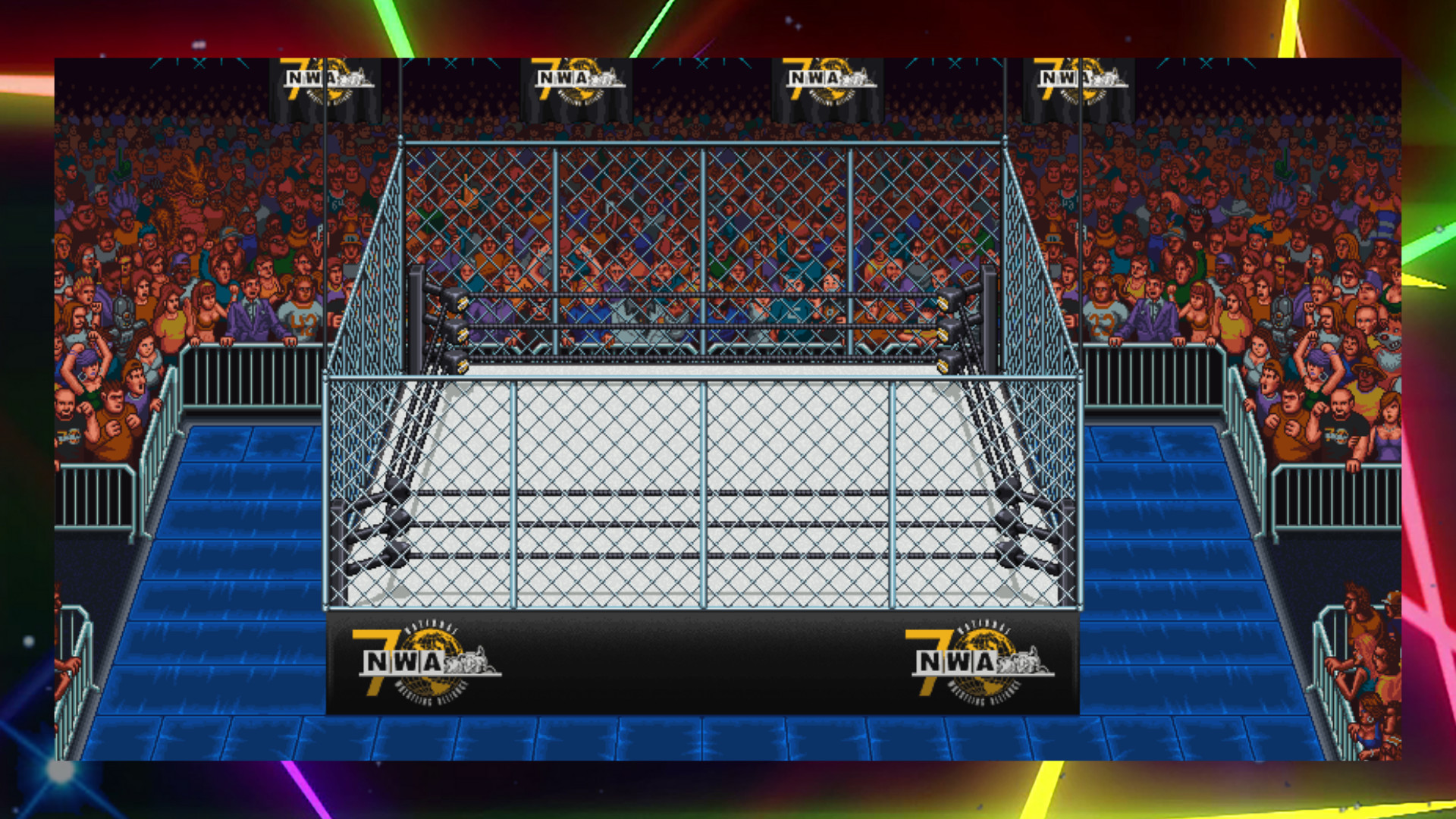 While the game currently lacks online multiplayer, plenty of local options allow you to jump right into a match. Most of them are variants on tag matches with varying numbers and rules. The one that stands out is Cage Match. I was disappointed that I can’t achieve a win by entirely climbing over and out, but by pinfall. Although, I greatly enjoy climbing to the top for a long drop on my opponent. If you’re craving some wrestling action with your friends or family, fans can play RetroMania Wrestling with up to 2-8 players.

Where I believe RetroMania shines is in its gameplay. Though there are a few areas in which it could explain some things, the gameplay mechanics aren’t difficult to understand. The objective in a match is to pin your opponent and build up a meter as you fight with that in mind. Each section of the meter enables the player to make stronger grapple attacks and eventually pull off finishers when it fills. To successfully pull off a grapple move, timing is critical as you need to make an input after the wrestlers’ front feet touch the ground. My only complaint is that I wish they would’ve better explained how to do finishers and reversals, both of which I had to look up. Every time I play a wrestling game, I worry that the controls will be too complicated, which isn’t the case here. 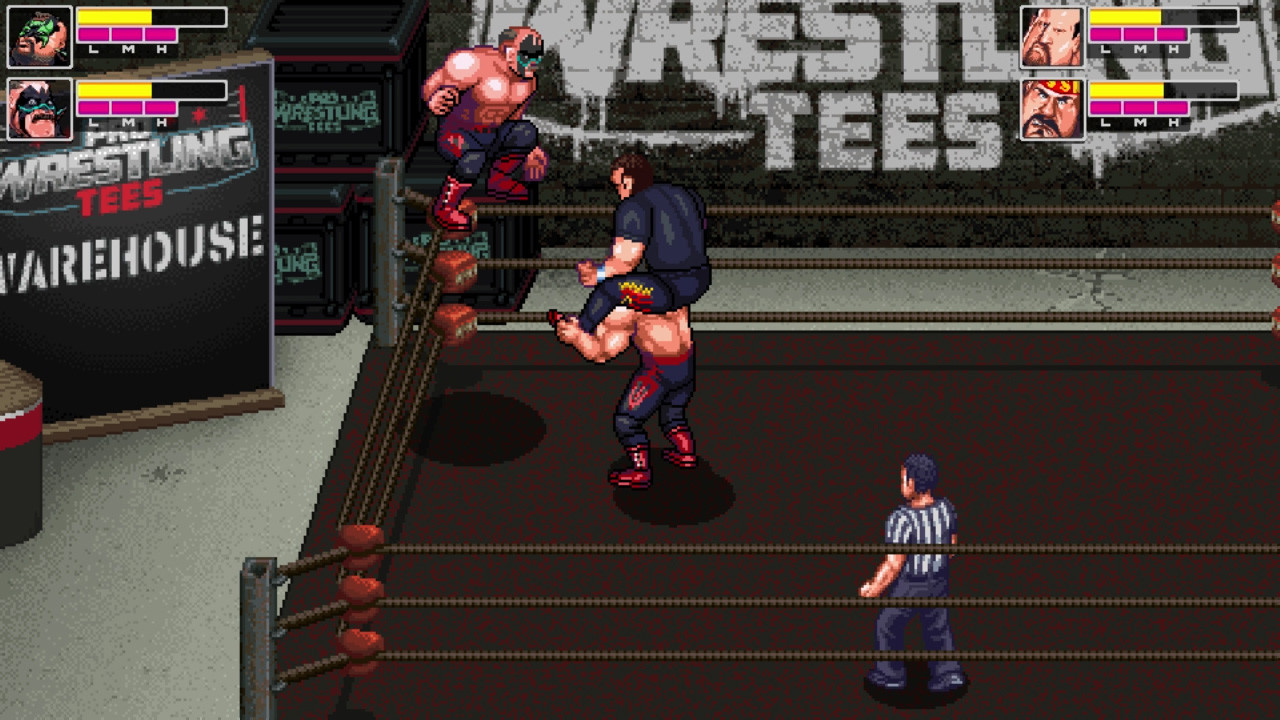 The presentation of RetroMania sticks to that of its predecessor, for better or worse. The visuals include immaculate pixel art, which is a nice change of pace from the messy pixel art that I see in too many indies these days. The character art in the story and menus aren’t much to praise, but the style reminds me of an exaggerated comic strip as it is still well done. What does make me cringe, however, is the audio. The game features some generic music with retro influence that was very loud on my TV in the main menu, leading me to turn it down a few notches. Lastly, I have to give RetroSoft props for including commentary and other voicework. It purposely captures the low-quality recordings that we heard in that era of gaming.

RetroMania Wrestling is not a game I can recommend to a casual fan of the sport. RetroSoft did their best to get the superstars they could into the roster, which is why people come to these games at all. I haven’t had as much fun with a wrestling game in a very long time, though I wish they explained some mechanics better. If you’re a long-time fan of wrestling, there may be a lot to appreciate, while other fans may want to look towards more retro options to satisfy their needs. It’s clear the developers put much love into developing this game, and I’d love to see what they could do with more resources, given the opportunity.

RetroMania Wrestling has the gameplay to go toe-to-toe with the best of the genre, but won't be winning any title belts.