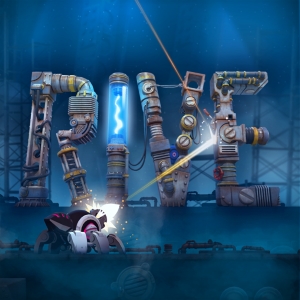 When I first saw RIVE in the Indie Mega Booth at PAX West 2016, I knew it was something special. I spent a fair deal of time in Two Tribes’ booth, watching company co-founder Martijn Reuvers ply his trade, my eyes fixated on the smooth, vibrant action in front of me. Upon my return home, I immediately set about procuring and playing through the game, finishing the adventure in only two sittings. Imagine my dismay when I found out this—one of the most entertaining, engaging games I’ve played all year—would be the developer’s swan song. 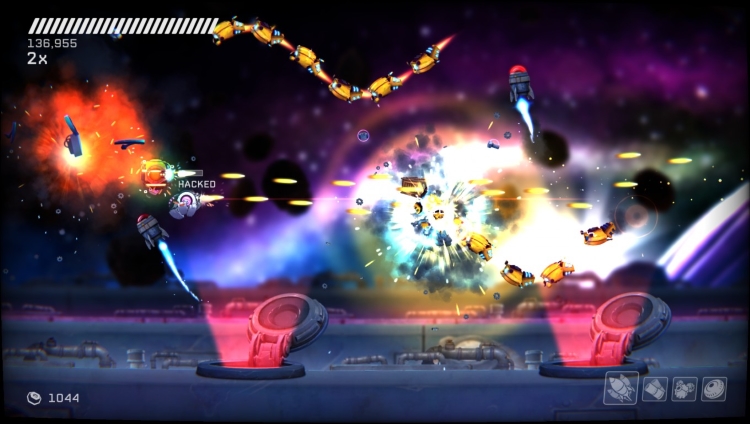 There is no mention of spirituality anywhere in RIVE, but we get to see the conversion of a man who starts off adversarial with the only other being he can talk to, and by the end of the journey, has shown that even he can forge friendships. There is a robot who fancies himself a creator, and by his own admittance must endeavor to construct and design. I believe he serves as a proxy for the developers himself though some may see a spark of our Creator in him.

The game is rated E for cartoon violence. You’ll spend the entire time shooting and blowing up robots. This game is kid-friendly from that standpoint.

By and large, the language is about on-par with a Saturday morning cartoon. Protagonist Roughshot does use some harsher language like D*** once or twice. That’s the most severe language you’ll encounter. 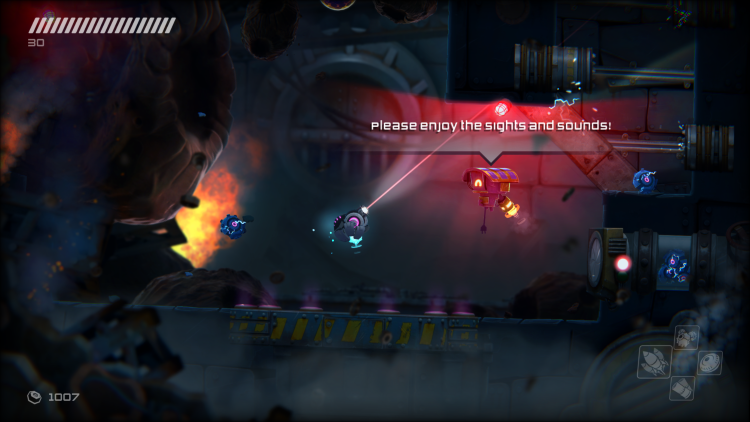 Though it may be a bit of a push, I would say Rive‘s positive themes would encompass perseverance and a creative spirit. Our hero refuses to quit, doubling up on his resolve when things look bleakest. One of the supporting characters in constantly looking for new things to create or rearrange to satisfy his natural drive. 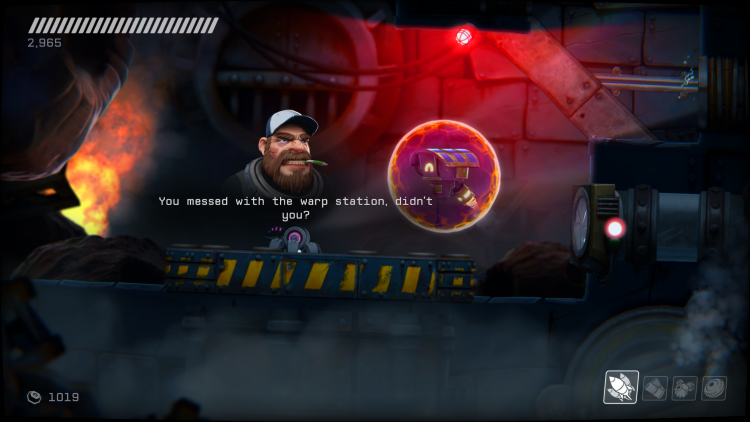 Every once in a blue moon, the world gets to reap the benefits of a video game lycan—the kind that seemingly comes out of nowhere, having run away from its villa deep into the night. It bares its fangs, howls at the sapphire above, and spends its twilight hours ravaging our hearts and minds. In its wake lie bodies with stupid grins on their faces. They were the lucky ones. They got to experience the werewolf’s bite and knew pure joy. Two Tribes’ RIVE is such a creature. 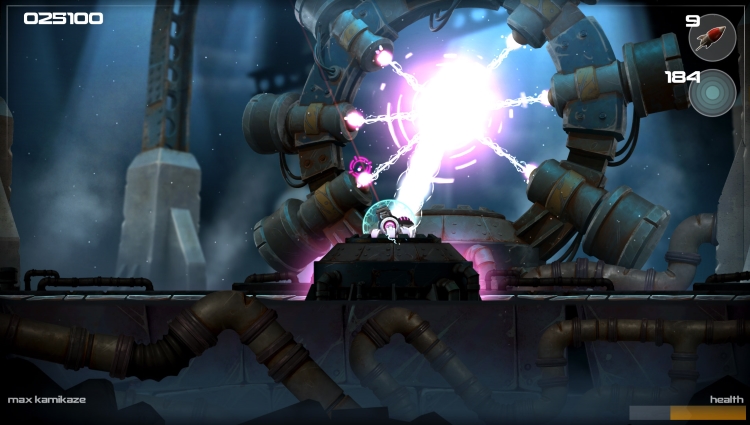 Roughshot, a rowdy outer-rim junker, veers off course and crash lands in a giant ship. He figures, “What the heck? I can get some sweet loot and make my way off the ship.” What he doesn’t realize, though, is how much DLL, the ship’s master A.I., wants him to stay and play. He’ll have to fight tooth and nail through hordes of robots and deadly environments to free himself.

Despite not breaking any new ground in the storytelling world, the narrative is surprisingly well fleshed out. Dialog between Roughshot and DLL is fantastic, full of humor and a slew of pop culture and gaming references. The story arc actually managed to wrap up with a couple of jokes, while still managing to slide some heartwarming moments in there as well. 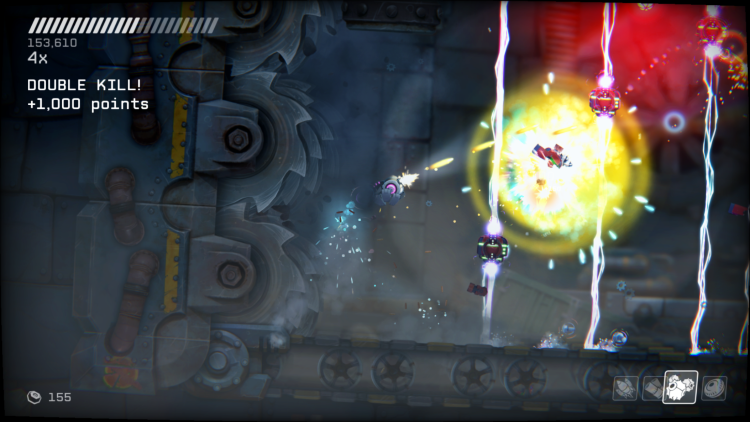 RIVE masterfully combines 2-D platforming with a twin-stick shooter, giving players sharp, responsive controls while still allowing for 360 degree of coverage. You’ll have to work your way through several missions that’ll take you throughout the massive ship DLL and his robot creations control. You’ll have to run, jump, glide, swim, hack, and shoot your way to your goal. Between missions, you’ll have some downtime for upgrades and new weaponry, making you the baddest man this side of the galaxy.

The controls are wonderfully responsive, and it’s a good thing since RIVE has no qualms throwing waves of enemies at you straight out of the gate. You’ll die…a lot…but don’t let that deter you. Respawns are quick and after a few attempts you’ll figure out how to get through whatever devilish array of obstacles stand in your way. The game’s checkpoint system is on point, ensuring you’re never more than a few seconds from whatever got you last. Boss encounter design is also top-notch, providing some fun, memorable clashes and engaging mechanics with an occasionally-rage-inducing difficulty often found in classic games. If I had to levy one argument against the game, it’s that some of the encounters can feel downright unfair for a while, but like any good boss from a Dark Souls game, the thrill of victory is unmatched. 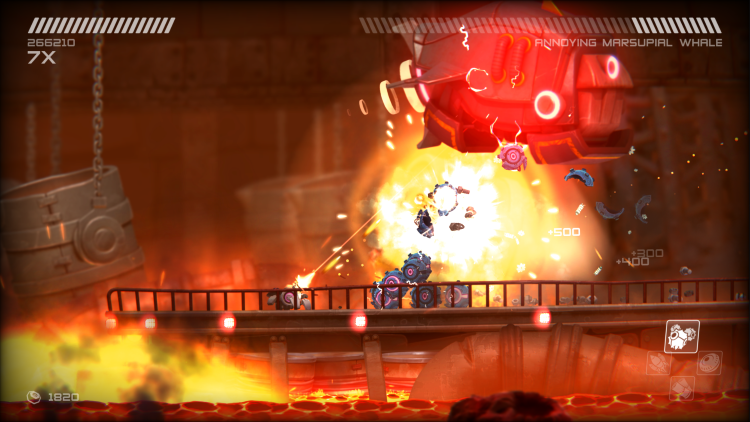 RIVE is a phenomenal looking game. The color scheme and art direction feel like a modern graphic novel or cartoon. It’s even more impressive when you see it in motion, with explosions shaking the screen and particle effects going off all over the place. The game’s animation is superb, providing that crisp controller feedback while treating your eyes to a symphony of destruction. RIVE does a wonderful job changing environments up to keep things fresh as well.

From an audio perspective, RIVE holds its own. Roughshot’s voice acting felt a bit off initially but quickly grew on me, and DLLs lined are flawlessly delivered. SonicPicnic (Awesomenauts, Speedrunners) has delivered an excellent, beat-filled soundtrack that engages players while accentuating the on-screen action. You’ll definitely want to play RIVE with the sound turned up. 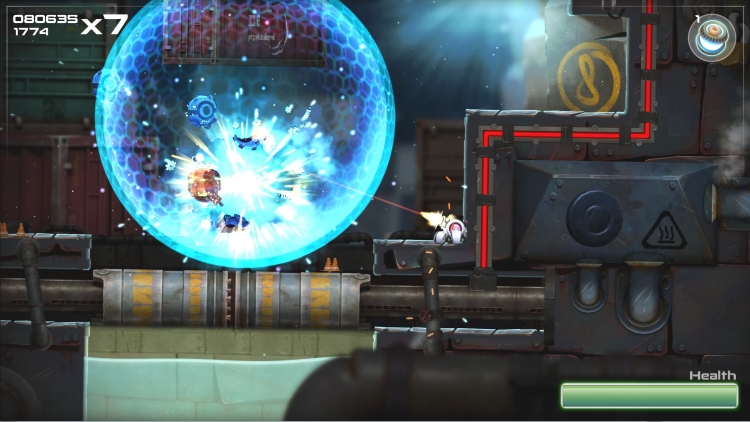 I was elated to have experienced RIVE and I feel like anyone who considers themselves a gamer should seriously consider picking it up. The game features a fun narrative with interesting, humorous characters, and addictive, eye-popping action on-screen. It’s sad to know this is Two Tribes last game, but they’re definitely going out on a tremendous positive note. The entire gaming industry should be taking cues from what’s done so right with RIVE.

RIVE is an incredibly well-designed game with wonderful characters, a good sense of humor, and fantastic art design. The game can be a bit difficult at times, but overall this is an absolute must-grab for anyone who longs for a solid, challenging SHUMP with some platformer elements.