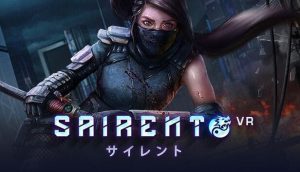 Sairento entered onto Steam Early Access at the end of 2016. I did not have a VR headset at the time, so I had to settle for a mental nod acknowledging and remembering its existence. When the Lord blessed my wife, and therefore me, with a free Oculus Rift during a raffle, Sairento was my first purchase, even before downloading the free “pack in” games Lone Echo and Robo Recall. Indeed, I wanted Sairento that badly; I just never got around to writing a review. With Sairento‘s recent, August 13, 2019 physical release on PS VR, I thought some VR fans would like to know if it is a worthy purchase. Answer: absolutely! 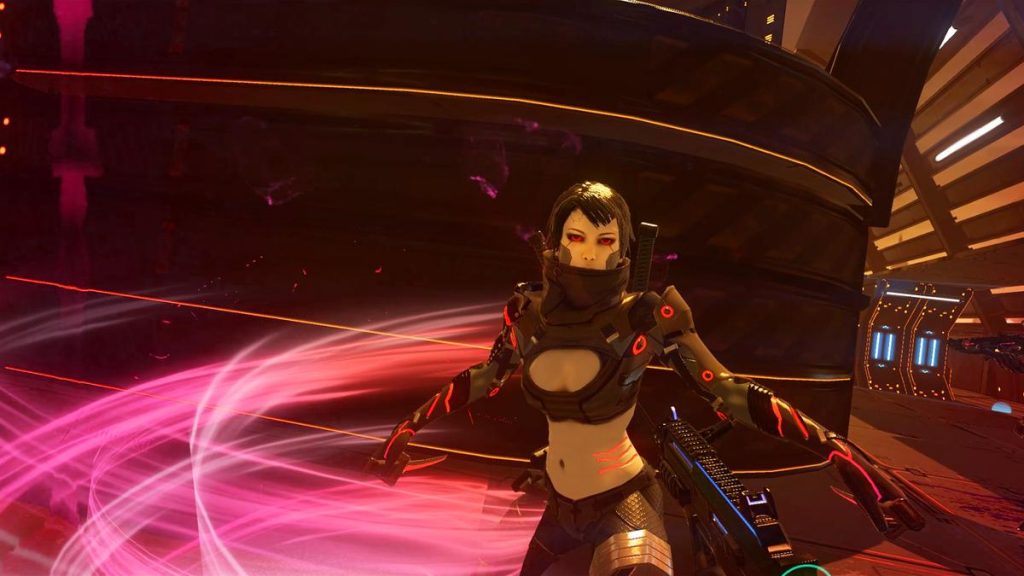 Kunoichi appear as an enemy type. Though the boob-window is (and always will be) silly, they are better dressed than I am accustomed to seeing female ninja in video games.

The most prominent content concern in Sairento is its violence. While it is free of gore and viscera, blood limbs fly freely from their host bodies when coming into contact with swords. No head, arm, leg, or torso is safe. Guns also tend to separate heads from necks in a spray of blood. The best way to describe the violence in this game is to imagine anime scenes such as those found in Ninja Scroll where a protagonist like Jubei cuts through dozens of foes and the sight of blood becomes as plentiful as air…and it is glorious! 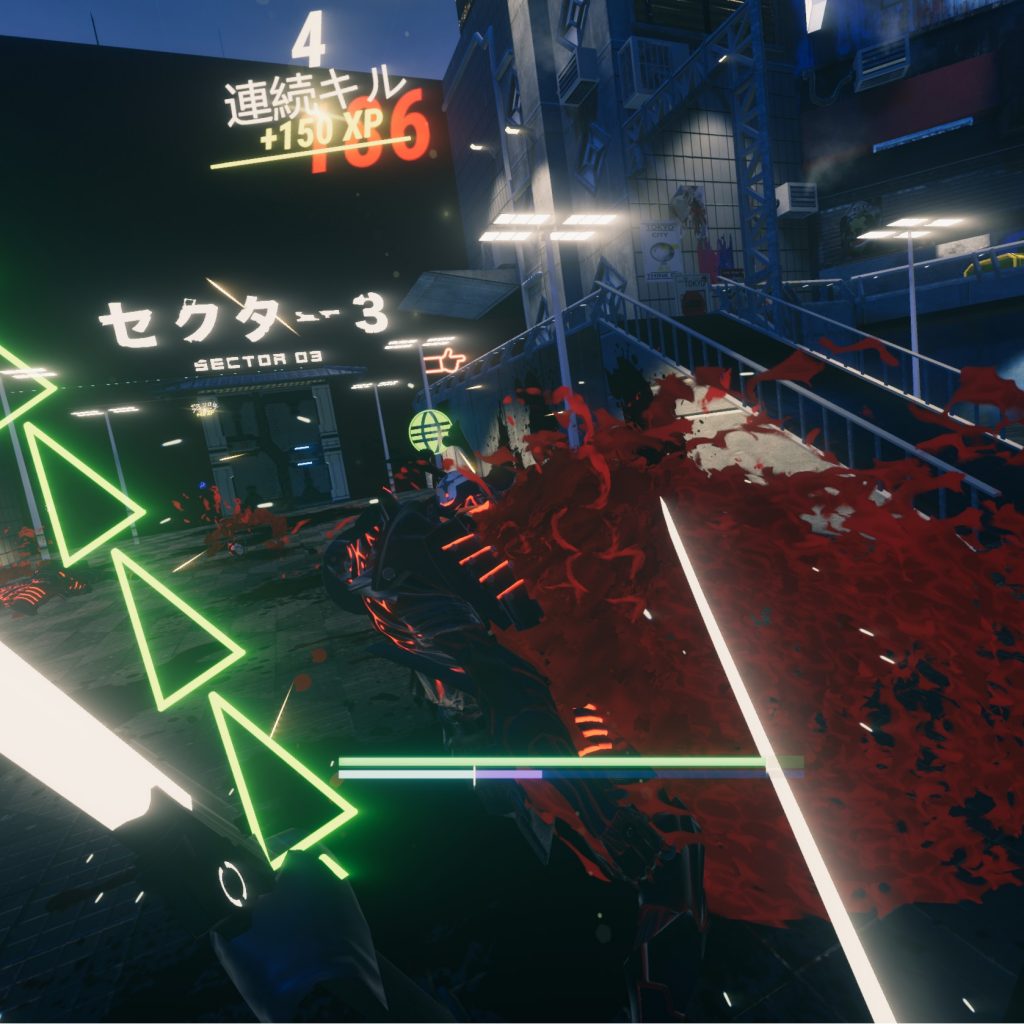 Played optimally, players will leave trails of bodies and blood all over the place.

There are a few swears. I counted one S-bomb, and I feel as though there might have been one D-word as well. 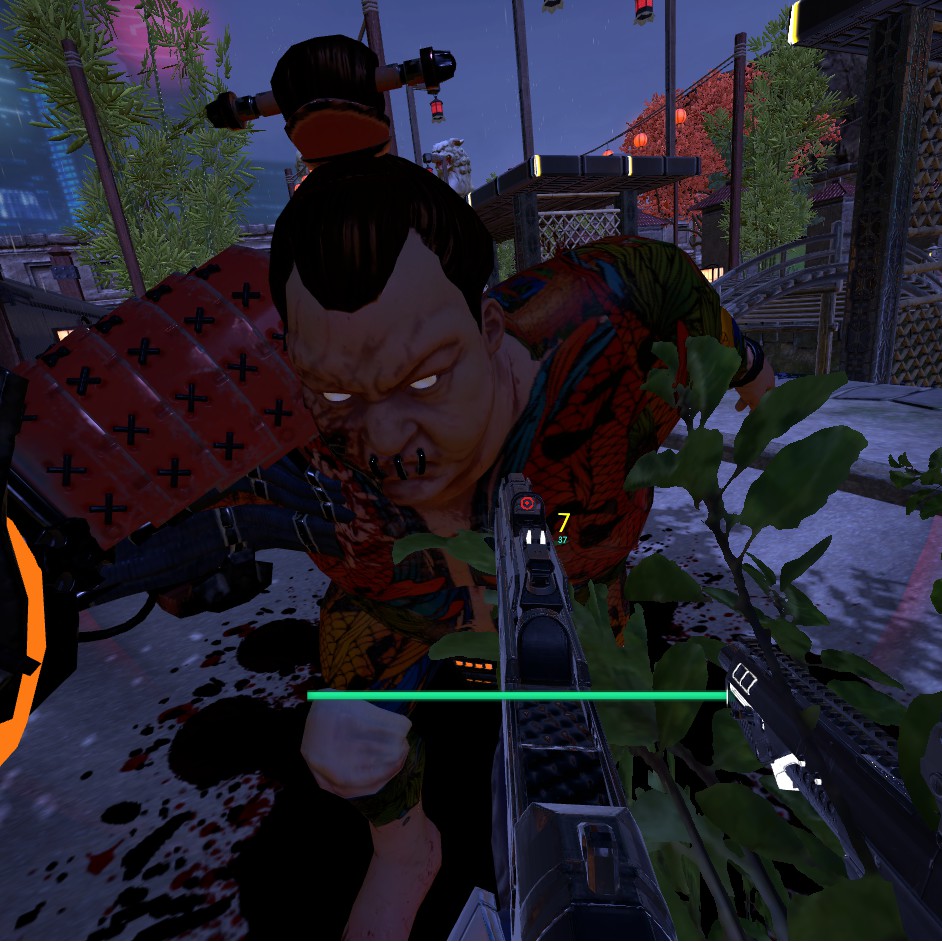 Up close and personal with a sumo. Still shots do not accurately portray the action in Sariento, but they do show off the impressive textures for a VR game.

Sairento is the kind of game whose story merely exists as perfunctory motivation for players to participate in the slaughter of endless foes. Under normal circumstances, this would bore me. For example, I would rather play the Uncharted series on the easiest difficulty so that I can experience the story while avoiding the boredom of participating in shootouts against a battalion of mercenaries, while lesser games test my patience, baring little post-encounter reward. With Sairento, however, I never grew tired of blitzing through rooms full of samurai and ashigaru—no further motivation necessary!

Part of the reason why I never fatigued in blitzing through this game are its procedurally generated level layouts. Oftentimes, “procedurally generated” is a curse, because assets often repeat, creating a boring experience. While there are some obligatory, generic indoor laboratories, Mixed Realms has included enough good looking environmental assets to maintain player interest. 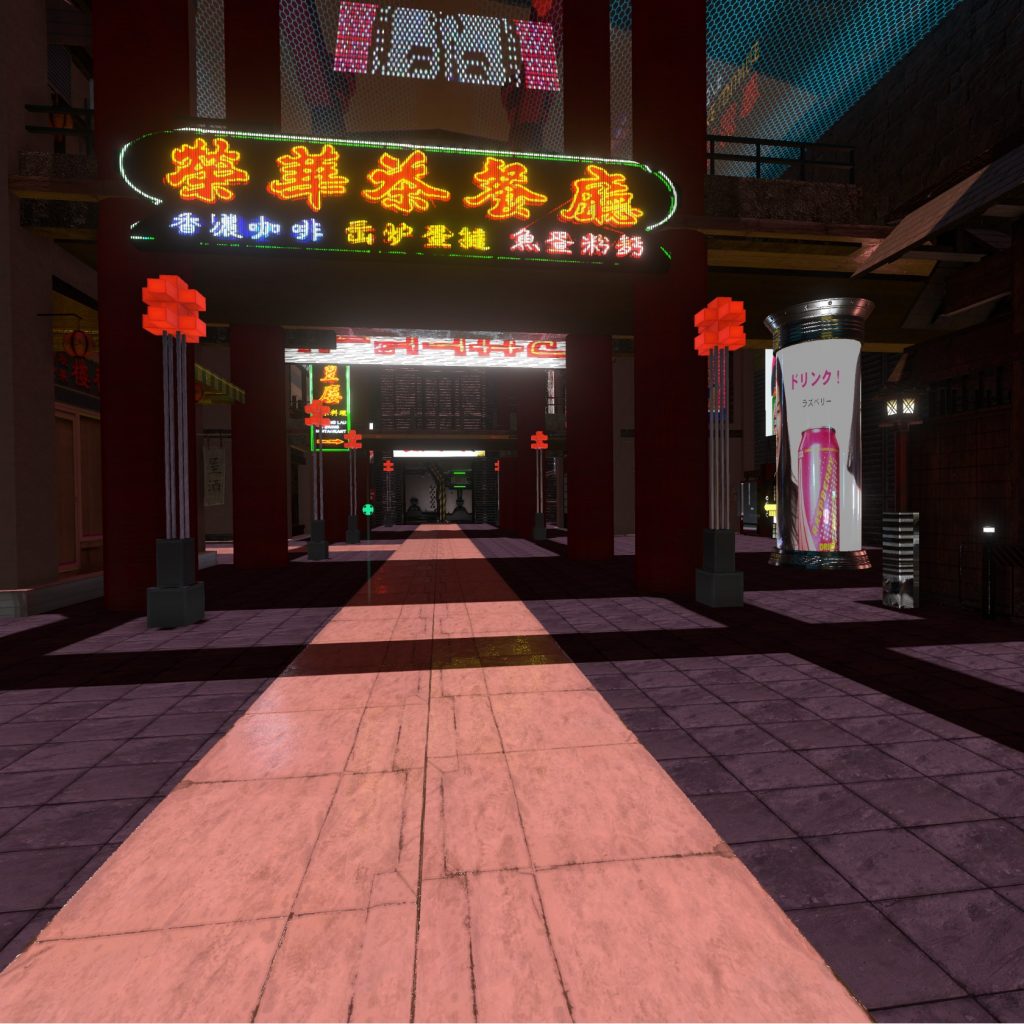 Sairento shines with the outdoor layouts. The shopping malls and highways are especially interesting.

As I closed in toward the 10-mission campaign, I unlocked more environments. This is important, because what provides Sairento with its longevity are its randomized single-mission options and two survival modes. These virtually infinite missions necessitate variety, and I am pleased with the provision here.

It is possible to waste a few hours at the Sairento dojo, physically (or er, virtually) located across from the menu. Because the game begins with all weapons already unlocked, the game innately encourages experimentation. My main loadout includes a sniper rifle that reminds me of the Quake IV rail gun mounted to my left shoulder, katanas on my right shoulder and left hip, a pistol on my right hip, and a submachine gun mounted to the lumbar. The number of possible configurations are limited more to a player’s imagination than the game’s allowance: swords on both shoulders or hips; all guns; a full arsenal of only ninja weapons; all are options.

Because Sairento is intended to be a cyber-ninja simulation where guns are considered fair game, conventional weapons were included to appease traditionalists. Besides the katanas, the game also provides shuriken, kunai, a bow, and a glaive that double-serves as a melee weapon and projectile weapon that can be thrown and caught like a boomerang—think Luna in DotA 2. Fair warning: using manual ballistics like traditional ninja weapons is a lot harder than it looks! One definitely needs to spend time practicing shuriken/kunai throws and bow shots. And while I am adamantly opposed to DLC, I enthusiastically recommend it here. The kusarigama is one of the coolest weapons ever invented, but it is also dangerous even for real-life experts to use, so better to play in a virtual environment than to risk life and limb. Additionally, the kigiri enables players to go full “Wolverine Berserker” if they would like.

This one is more John Wu style.

Not that the DLC is necessary to go berserk, because I managed just fine while swinging around katanas in both hands. I mostly play Sairento while jumping from various elevations and slow-motion dashing through hordes of evil ashigaru, samurai, kunoichi, sumo, and evil geisha. If players grow weary of too many of the same enemy type, it is possible to escalate the difficulty to higher tiers, which will increase enemy density type, damage, and HP; this also increases quantity and quality of drops. Notwithstanding, I never bored of leaping and jaunting through an army, cutting down a half-dozen in a room before the first body drops, then disengaging slow-mo to watch the scene rain with red. While guns are also satisfying, crumpling enemies after riddling them with bullets, I wanted to use swords almost exclusively, and Sairento provides the tools to do so. And so I did. Preferring an aerial assault, I hardly bothered with wall running and power sliding, though both providing extra gameplay possibilities and experience points.

While I mentioned that Sairento begins with all weapons unlocked, one undergoes progression through accumulating experience and various data points. The latter are used to craft relics that attach to and modify weapons, adding modifiers such as additional damage, reload speed, maximum HP, and so on. The former are allocated into skills that “permanently” (because they can be reallocated) sharpen the player-character’s abilities in many ways similar to relics. Notwithstanding, a few of these skills are worth noting.  My playstyle would be hardly possible without the triple jump. Thus far, pride has prevented me from putting the aim assist skill for shuriken to use—one day, I will.

MadFox needs to turn up his lighting, but I hope this conveys that the city map type is the BEST due to the artwork on the walls.

After all of this said, I still feel that I am underselling the game, so let me be clear: this is the best game I have played in VR. Even being “tethered” with the cords of my Oculus Rift, this game is the closest I have ever felt to being a real-life Shinobi, bringing back fond memories of me jumping around in my backyard, swinging around plastic katanas purchased from the dollar store after the first time I saw Revenge of the Ninja. Those lucky enough to own a VR device are doing themselves a disservice if Sairento is not in their libraries.