Bandai Namco has a penchant for releasing games that appeal to gamers with anime sensibilities. Early footage of Scarlet Nexus showed that anime-focused game design would continue. What we actually got was more focused than your run-of-the-mill anime game. Scarlet Nexus is a beautiful action RPG with a well-told narrative, varied cast of characters, and mind-bending time travel.

Spiritual Content: There’s an entire city-state that’s built around an organized religion that worships the moon. They’re technologically advanced but, ultimately, corrupt and scheming. There are monsters called Others that are created by transforming humans. The spiritual implications of those aren’t ever discussed.

Violence: There’s a substantial amount of fighting in the game. With regards to visceral violence, though, there’s little more than some blood. There’s nothing to be concerned about with visual viscera like Doom or Mortal Kombat.

Sexual Content: The main characters are teenagers. They discuss liking other members of the team, thinking they’re cute and whatnot, but nothing sexual in nature is ever discussed and characters are largely dressed respectably, which I consider to be out of the norm for anime-styled games.

Drugs and Alcohol: There are no uses of drugs or alcohol I can recall, but you can buy sets of alcohol as gifts to give team members.

Language/Crude Humor: There is some mild language used in the game. Suspect the possibility of hearing A**, D***, or S***.

Positive Content: Characters support one another and your teammates bond in meaningful ways. 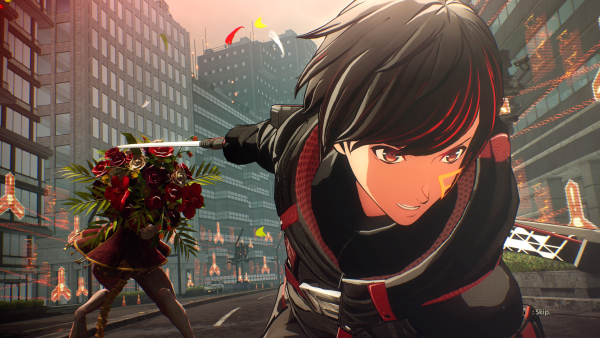 While I initially thought Scarlet Nexus was just going to be another fun action-focused anime game, I was intrigued enough to check it out. I’m thoroughly pleased with that decision. While the game catches your eye with its pretty coat of paint, there’s a deep, engaging narrative here to reward players for their ~20 hours with the game (per character).

The world is surrounded by an entity known as “The Extinction Belt” that continues to drop monsters known as “Others” into cities to attack people. You’ll have to uncover the mysteries surrounding The Extinction Belt, the Others, and more to save the world. The game has you control one of two characters whose stories intertwine. You can pick Yuito, the volunteer soldier with family in political leadership, or Kasane, a gifted young soldier who joins the military primarily to help protect her sister. Both have completely unique personalities and playstyles, and their stories complement one another. In fact, to really get the full story you’ll have to play both campaigns, as there are gaps in the two over the course of each playthrough.

I’m genuinely impressed with the narrative and storytelling in Scarlet Nexus. The characters are fleshed out, particularly if you invest time into growing your teammates’ bonds. The story can go some pretty wild places, too. While it doesn’t break new ground for fans familiar with anime tropes, it keeps things interesting and the pacing prevents the story from feeling cumbersome.

The gameplay in Scarlet Nexus is action-focused with some light RPG mechanics. You have a skill tree you can grow and fill out, but the combat itself largely comes down to timing perfect dodges, counter-attacking, and proper use of SAS, a system that allows you to link with and borrow abilities from your teammates. Whether it’s borrowing fire from a teammate to attack an enemy covered in oil or using clairvoyance to spot enemies shrouded in smoke, there are reasons to constantly rely on your squad. Both Yuito and Kasane also employ psychokinesis, letting them throw objects from the environment at enemies with their minds. The result is a combat system that keeps things flowing while maintaining enough challenge to consistently engage the player.

From an audiovisual standpoint, Scarlet Nexus feels like it stands out. The game looks gorgeous, employing a visual style that really pops. The character design feels like an interactive anime, and some of the enemy design is eery and unsettling. The combat animation looks slick as well. My only real problem with the game is in the way the storytelling is presented, with much of the narrative visuals being in-engine still images with the occasional talking head. It works, but it feels like they used it as a shortcut to deliver the game sooner.

The game’s voice acting and soundtrack are both well done. From smooth jazz to pulse-pounding combat tunes, it all helps drive your focus to the events in the game’s world. For such a varied cast, it feels like everyone hit their roles out of the park, too. No one feels like they delivered a lazy or uninspired performance.

Maybe it was a right-time-right-place sort of situation, but Scarlet Nexus turned out to be one of my top experiences so far this year. The story had some interesting beats with intriguing twists. The cast was full of compelling characters, and combat maintained both a flow and challenge that kept things from feeling too stale. I really enjoyed my time helping these squads of young super-powered soldiers save the world. I’m already looking forward to a sequel one day.