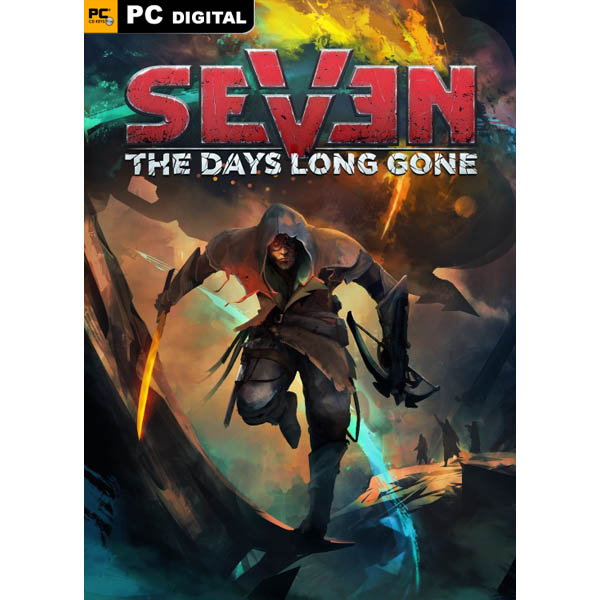 An open ended, top down stealth, action, and RPG rolled up into one, Seven: The Days Long Gone takes the best elements of familiar games, like stealth and climbing mechanics and a branching upgrade tree, and puts it all together in a fun, yet sometimes overwhelming, setting. The games might reach a little high in terms of what it’s trying to achieve, but it still results in a good time.

The setting has its own form of a technology-centric religion, as well as clerics that both help and hinder the main character by being healers or working against him.

The main character is possessed by a daemon early in the game, though this game treats daemons more like AIs (think Cortana from the Halo series) rather than nefarious spiritual beings.

The emperor of the land is called the “God-Emperor” and is revered as a divine being.

I noticed nothing bad, but this is an open ended game, and not all quest lines were explored for this review.

Some NPCs will make a pass at the main character, along the lines of, “I’ve been thinking of you.” It is hinted at by some NPCs that some characters are homosexual.

Drugs and alcohol exist as items in this universe, and have status effects.

The game brings up the role of technology in society. Ultimately it’s up to the protagonist to decide where it belongs. 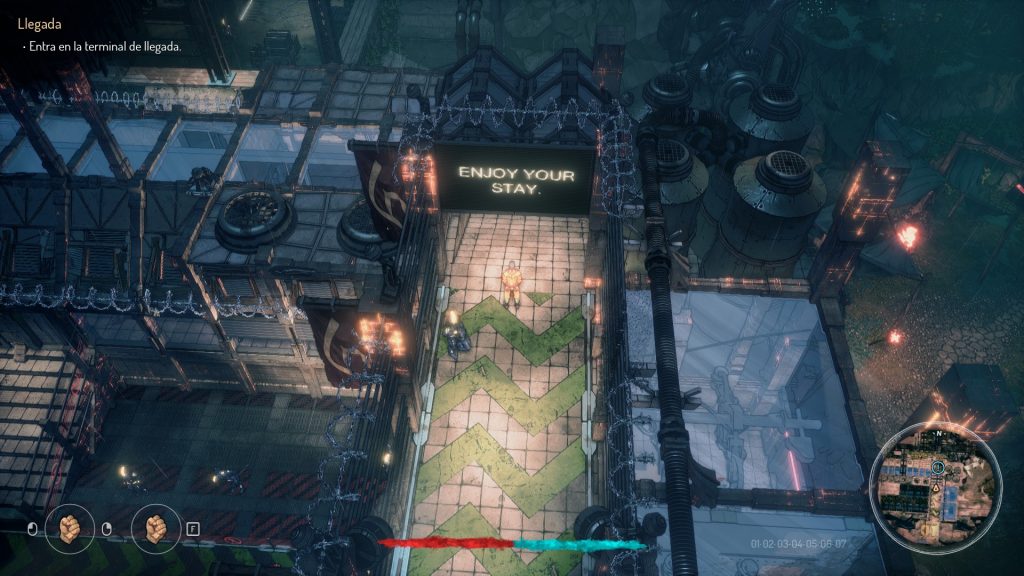 Seven: The Days Long Gone is, if anything, ambitious. There’s a lot packed into this game. It’s an action game, and it’s a stealth game, and it’s also an RPG, and there’s crafting, and it’s open world, so there’s a lot of exploration. And these things are is the game’s greatest strengths and weaknesses. One one hand, there’s so much stuff in the game that there’s always something to do and stuff to investigate. On the other hand, the fact that there’s so much means a lot of the game feels directionless. If you’re the type that’s overpowered by choice, then this game might be a bit too much. The game does things to help you learn just what’s in it, but with mixed success.

The best way to describe this game might be to compare it with others, since it seems to have garnered inspiration from other titles. It looks a lot like Borderlands 2 and plays a lot like the Assassin’s Creed series, with some crafting thrown in as well. It’s a top down adventure game, and does this well. I never had a problem with the camera in this game. It’s responsive and works surprisingly well if you’re in a multi-level building.

The game’s plot revolves around Teriel, a master thief with a thick cockney accent. He lives in a dystopian future where technology seems to be regarded like magic or a religion. Under the thumb of the Empire(™) headed by God-Emperor Drugun, Teriel is captured and shipped off to the prison-island known as Peh. En route to the island, Teriel is possessed by a daemon. As mentioned earlier, however, daemons in this setting are more like virtual assistants. 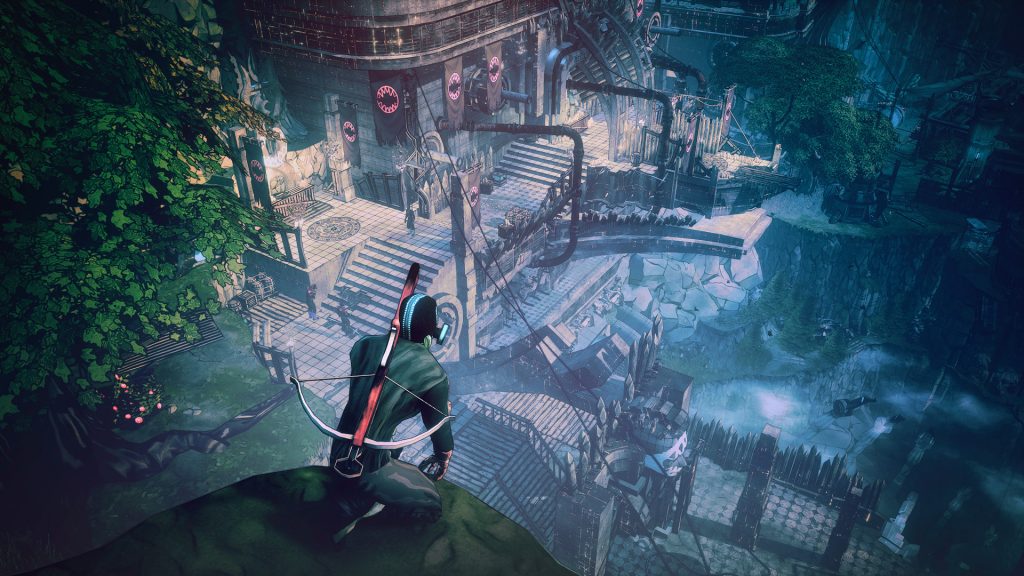 Once on the island, Teriel finds that conspiracy runs deep, and different factions are warring against each other. The game becomes more open, and Tauriel can take quests from the different beings and work his way through the deep cracks forming in Peh’s society.
The story is engaging and interesting when you get to it, but there’s so much potential side material that it’s easy to forget the story beats and plot. You can be questing, looking for enough money to purchase a checkpoint pass, and completely forget why you’re going past the checkpoint in the first place.

The gameplay, like the story, has a lot of options, and here the number of options work better. Teriel is a thief, and thus has a knack for sneaking. He’s also not bad in a fight, but this game is punishing when it comes to combat. One mistimed swing means the enemy has the opportunity to set up a combo that can take out half your health. You also have a choice of long or short ranged weapons, making combat even more dynamic. Even opening a locked door comes with strategic options. These tools under a player’s belt means that almost any challenge, with a little bit of luck, is doable. Seven: The Days Long Gone is tough in that respect, but fair.

The game leads you through a tutorial level and then drops you off on the island for the main story, but there probably could have been more time for a tutorial. The game teaches you the very basics of movement and interaction, but then leaves when you find upgrades or want to switch items out. Seven: The Days Long Gone has a steep learning curve, and with the amount of things to learn in the game, from crafting to leveling up, there’s a lot at the front end that needs to be learned. Fortunately, this is the kind of game where its worth figuring out. 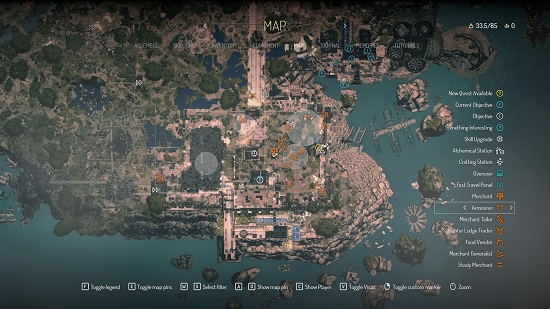 One of the weaker parts of the game are the menus, and it feels like a result of the overflowing nature of the narrative. There are menus and menus of stuff, and navigating through all of them just to equip a new weapon or clothes is a chore. The map the game gives you is filled to the brim with what I’d describe as noise. Admittedly, a personal gamer pet peeve of mine is when a game gives you no idea where to go next. I realize that that’s not a failing of the game itself, but if you’re the type who likes games with map markers, be ready to sort through a lot of background static when looking at the map.

These are a few of the reasons why Seven: The Days Long Gone feels bloated at times. On one hand, there’s a lot of good, interesting material in this game. On the other hand, getting to that material requires you to sit down and figure how to make it accessible. This reminds me of the first Mass Effect game, where most of the tutorial is kept in the game journal, and I didn’t like it there either.

Those things being said, this game seems tailor-made for multiple playthroughs, since four endings to the game exist. That being the case, making a short tutorial level might have been a good design choice to facilitate acquiring them. There’s a better middle ground in there somewhere, but I’d be remiss if I failed to say that once I got a handle on the map and the interface and the quests, the game didn’t suddenly open up for me.

Seven: The Days Long Gone is an experience that demands multiple playthroughs, and from what I’ve experienced, it deserves them. It has a lot of interesting lore and gameplay to justify the hours spent. The game needs some polish when it comes to non-gameplay things (as mentioned, the menus and map interface), but it doesn’t detract enough from the experience for me not to recommend.

Seven: The Days Long Gone is a top-down action game that deserves to be looked at simply because of its ambition. There's a lot to do, especially for an indie game. If you can get by the messy menus and the learning curve, it's worth the money.