Review: Shadow of the Colossus (PS4) 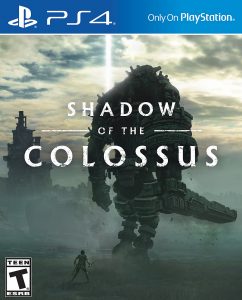 To make the remaster possible, Sony once again drafted Bluepoint games for this massive undertaking. For those unfamiliar with Bluepoint Games, they are game developer whose work focuses on remaking/remastering classic games for new generations. Titles they’ve worked on include the Team Ico Collection, the God of War Collection, Metal Gear Solid HD Collection, PlayStation All-Stars Battle Royale, Flower, Uncharted: The Nathan Drake Collection, and Gravity Rush Remastered. While it would be easy enough to slap a new coat of paint on an old game, Bluepoint Games crafts their games with love and that love is very apparent on the Shadow of the Colossus remake. 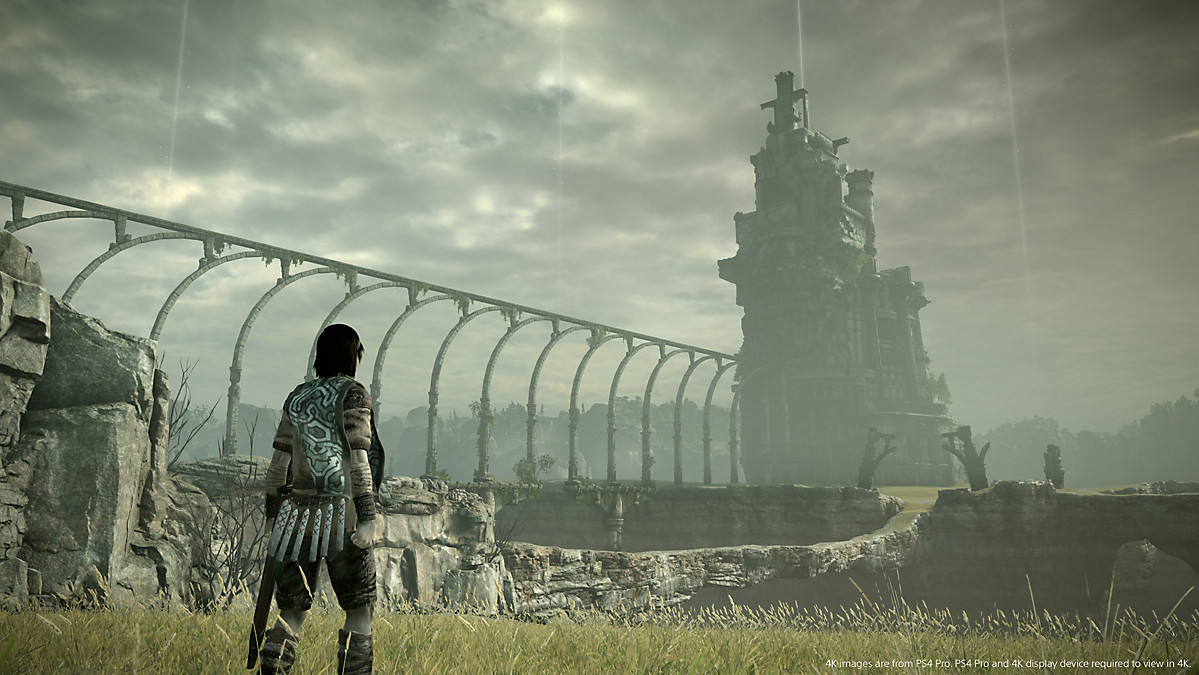 Violence: Shadow of the Colossus contains violence both on the part of Wander and the colossi. Wander is equipped with a bow and arrows as well as a sword. Wander must strike and shoot the colossi to defeat them. During these battles, the colossi will attempt to strike, throw, stomp, or shake Wander and his horse Agro. Wander can also die during these boss fight encounters as well as falling off cliffs or waterfalls. However, the violence contained in Shadow of the Colossus is quite tame compared to other games found in this same genre.

Spiritual Content: As a pastor, I view things a little differently—I find Shadow of the Colossus to be quite spiritual. One of the things most interesting elements is the fruit found throughout the game. Most of the fruit you find increases stamina or strength, making Wander stronger or less human. Yet in a special area of the game, the fruit you eat decreases your health, leading the player to death. This connects the player with immortality and mortality. In my mind, this has connections with chapter two in Genesis where the tree of life and the tree of knowledge of good and evil are described. One grants life, the other death. One grants a blessing, the other a curse. 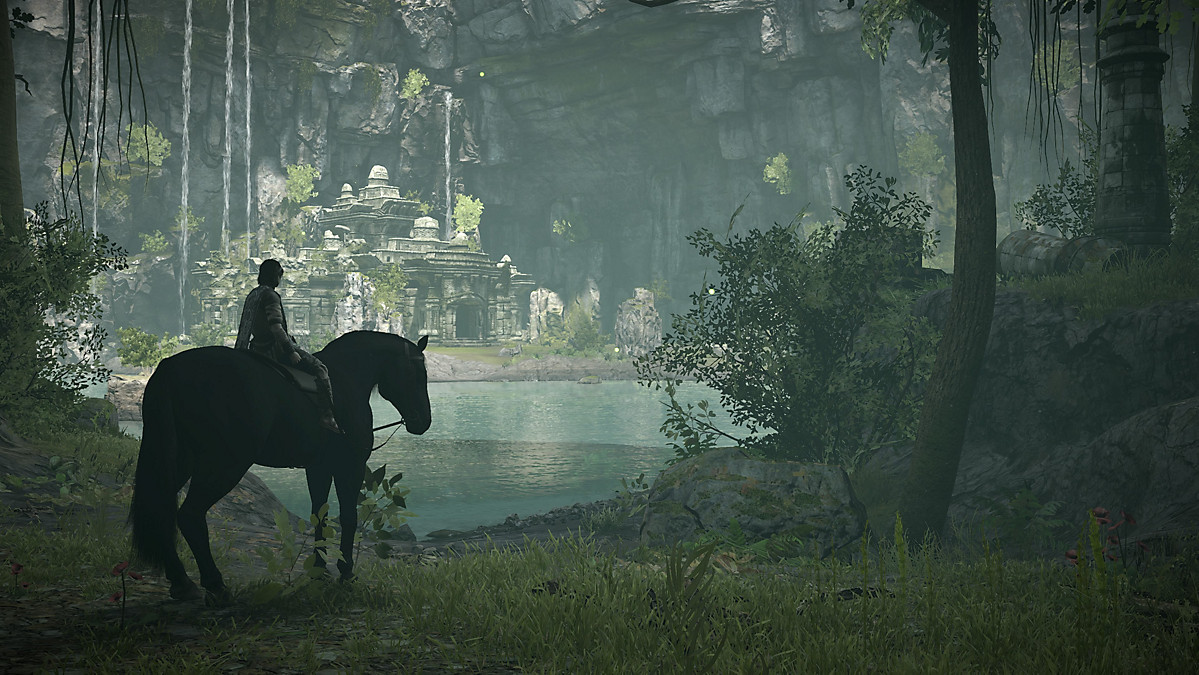 At the heart of the game, we’re looking at a character who is willing to sacrifice everything to save the life of another. We can look at this in two ways. One way regards Wander as a Christ-like figure who gives his life for another; however, I refrain from making that comparison for a couple of reasons. First and foremost, Wander, though he loves Mono, his actions are selfish and have led him to rebel, steal, and disobey his spiritual leader Lord Emon. The other way to interpret Wander’s quest is that his actions only benefit himself but he must also journey and kill. His pursuit of “love,” has become the most important thing. In Christianity, we call this idolatry. To paraphrase Martin Luther, “anything we love more than God, that is truly our god.” So while we may appreciate Wander’s mission to bring back his loved one, his actions will have greater consequences as you will see when you play through the game.

Something players will notice are the shadowy or demon-like figures in the game. While they do nothing more than appear and congregate, it may cause some to feel uneasy. Also, something worthy to note is the fact that as Wander kills the colossi his appearance degrades, and towards the end of the game, he begins to grow horns as well as appearing undead or zombie-like. The last noticeable spiritual element of the game comes through small prayer shrines. At these shrines, Wander may stop and pray to the current idol he’s stalking. The shrines are basically checkpoints or save points. When Wander prays, his health and energy are restored and if he is killed in battle, he will respawn at that point. 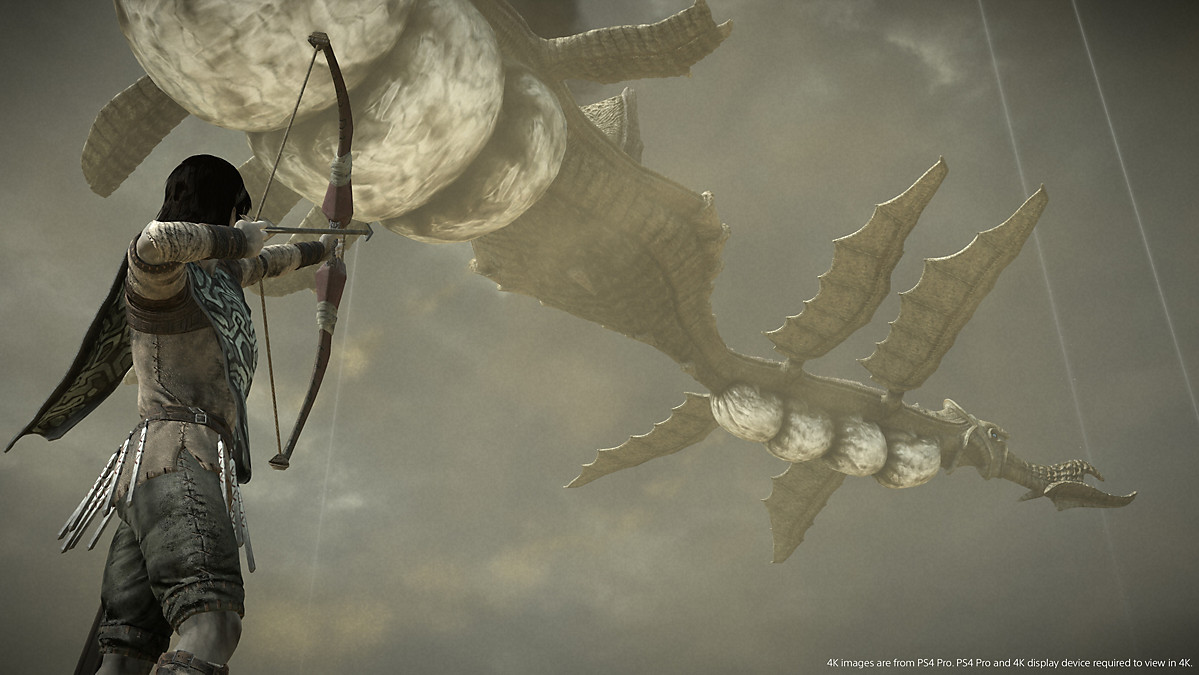 Positive Content: Shadow of Colossus is, in general, a positive game. It looks at the determination a person has and what it means to follow through with a task. As the players will learn, the colossi will become increasingly difficult but they payoff means your friend Mono will live once again. Meaning it explores the ideas of loss and love. The game looks at the hope of resurrection, though it may be through a different lens.

In the Shadow of the Colossus, you play as a boy named Wander, who has traveled into the forbidden lands with his trusty horse Agro along with a recently-deceased young woman named Mono. The story begins with Wander traversing a small pathway, crossing a long stone bridge and then placing her on an altar. Soon after placing Mono, he is approached by several shadowy figures and a booming ominous voice from Dormin, a divine being. Wander pleads for their help because he believes these figures will help him bring Mono back from the dead…if he completes a task for them. The dark figures then promise to bring Mono back from the dead if he slays sixteen colossi scattered throughout the forbidden lands. From that point forward, Wander tracks down and harvests the sixteen colossi. 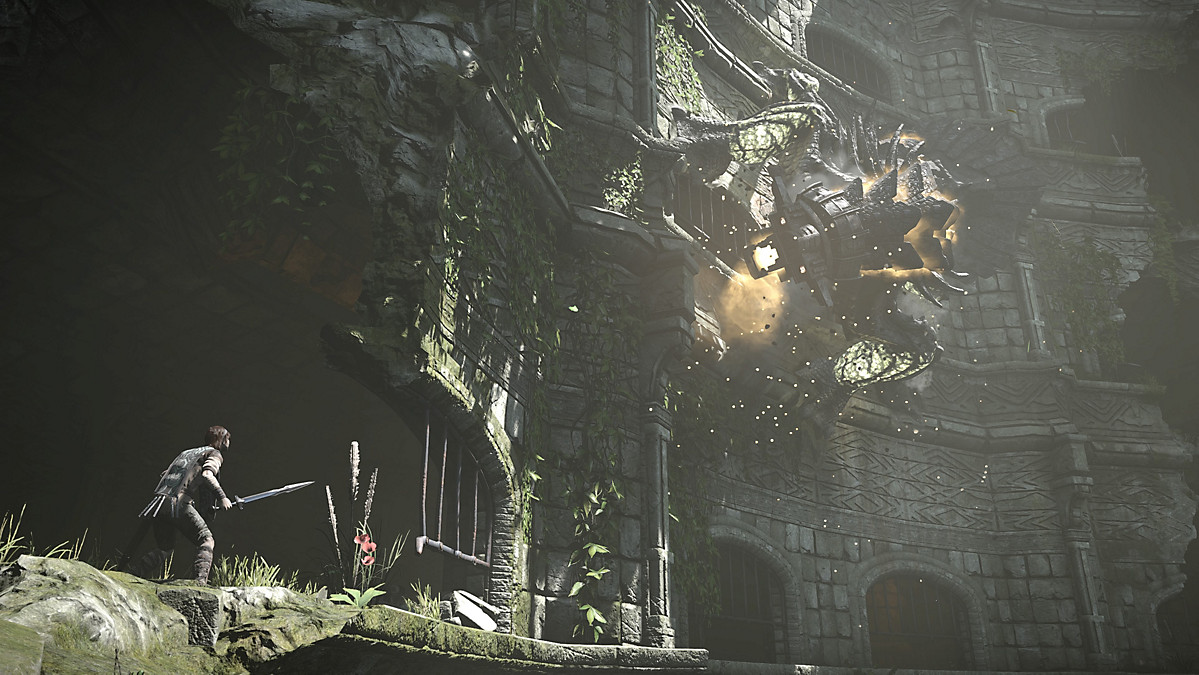 The Shadow of the Colossus is minimal with its cast of characters as well as the overall story arch. This means when a character is seen in-game or heard speaking dialogue, it is vital to the story. So in addition to Wander, Agro, and Mono, we learn of Lord Emon through narration. Lord Emon is a sort of shaman or tribal leader who perhaps trained Wander in their religion and customs. This leads us to the colossi themselves. Each colossus has a theme to match their environment. For example, a colossus found in the desert is similar to a snake. A colossus found in a small coliseum can climb the walls and so forth. Each colossus has their own unique area, attack patterns, and even personality.

This leads us to gameplay. Essentially, the Shadow of the Colossus is boss fight after boss fight. I find this to be enjoyable. The colossi themselves are puzzles to be solved. Attack patterns that work for one colossus oftentimes have no resemblance to how you defeat the next. That being said, each colossus has certain weak points covered by a sigil which will glow when you get close. This keeps players on their toes, and always has players looking for places to climb on the colossus, corridors to explore, ledges to jump from, or paths to choose to help defeat their next idol. 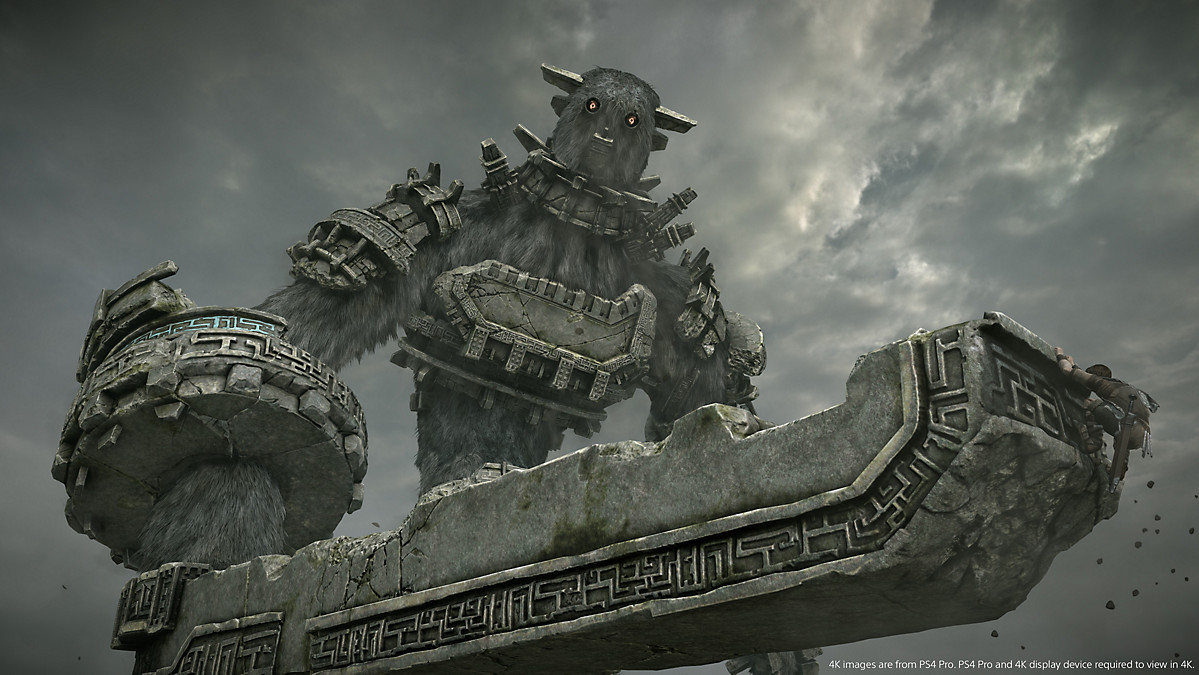 Shadow of the Colossus has a few controller options to choose from; those who perhaps played the game on the PS2 may want the classic feel or those who need a more modern control scheme may choose the updated controls. The controls are perhaps my biggest complaint. While the new setup seems to improve upon the earlier controls, I still found them to be the seventeenth colossus I battled. I found it difficult to keep the camera where it needed be intense during fights. Raising your sword creates a sort of homing beacon of light, guiding you to the next colossi, which is good, but if you’re riding Argo and try to use the sword, the camera will instead zoom in really tight on your horse, making riding and tracking the next colossus at the same time nearly impossible.  Lastly, aiming my bow at the silver tailed lizards when at shrines is a challenge with all of these camera issues. I realize this game is a remake; I just wish Bluepoint would have spent more time crafting a better controller and camera communication.

Visually, Shadow of the Colossus is very beautiful. One of my favorite things to do in the game is riding Agro across the meadows and watch the wind blow the tall grass. Water effects are also breathtaking. It’s in these areas—meadows, water, sand, and rock formations—where the Shadow of Colossus excels. It’s amazing to watch as Wander falls into the water and his clothes remain wet for a set time. It’s amazing to climb up the colossi by their detailed fur and find attack points. It’s amazing to see lighting effects when Wander uses a torch in caves. 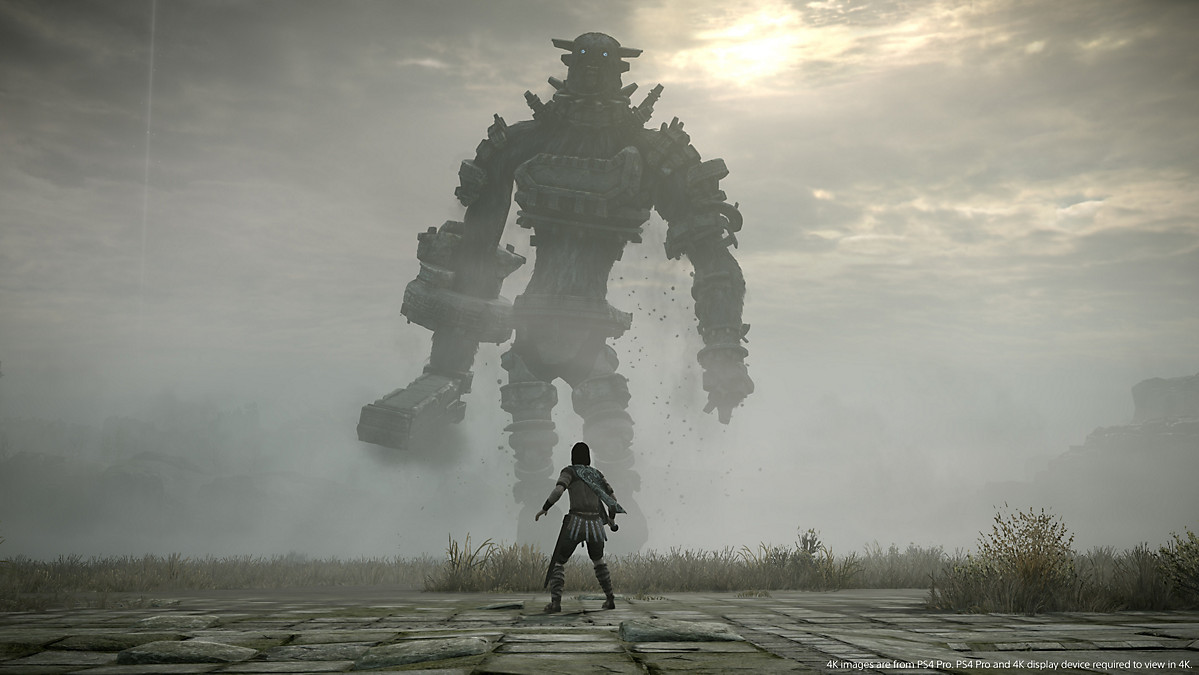 Overall I can’t recommend Shadow of the Colossus enough. It is a great game that will keep you engaged for its entire length At least for me, after each colossus I defeated, I couldn’t help but feel sorry for Wander and the creatures. Wander kills the otherwise seemingly peaceful beasts, and then he is filled with darkness making him less human after each encounter and all for the sake of Mono. Shadow of the Colossus is nothing short of a masterpiece. If you haven’t played this game, before or if you’re wanting to revisit this classic game, now is a great time to jump on board.

This is a must play for all PlayStation 4 owners.