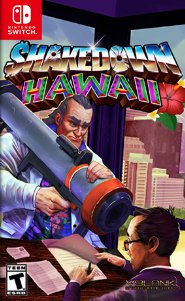 To be honest, I can’t say on which platform I first played Retro City Rampage. Whether it be through a direct purchase or a Humble Bundle, I somehow have acquired it on almost every platform. I’ve played it on the Vita, 3DS, PC, and even the Switch most recently. As many times as I’ve played it, the best parts were its humor and on-the-nose references to all things retro. Plus, the Grand Theft Auto-inspired open world and 8-bit aesthetic provided plenty of entertaining moments.

Vblank Entertainment is at it again with a follow-up called Shakedown Hawaii. That same open-world action is back, but with a graphical update inspired by the 16-bit era of the Genesis and SNES. The humor also makes a return but has a different target in its line of sight. Though it has twice the bits, is Shakedown Hawaii just as good as the indie dev’s previous work?

Violence: In Shakedown Hawaii, players use a variety of firearms and melee weapons against civilians and police while causing destruction to the city. When shooting, hitting, or running over a person, no blood is shown but cries of pain can be heard. Many missions in the main story will have players committing acts of robbery, burglary, and vandalism.

Alcohol/Drug Use: One of the characters mentions that he once used illegal supplements and steroids.

Language: Only the word “do*chebag” is present. 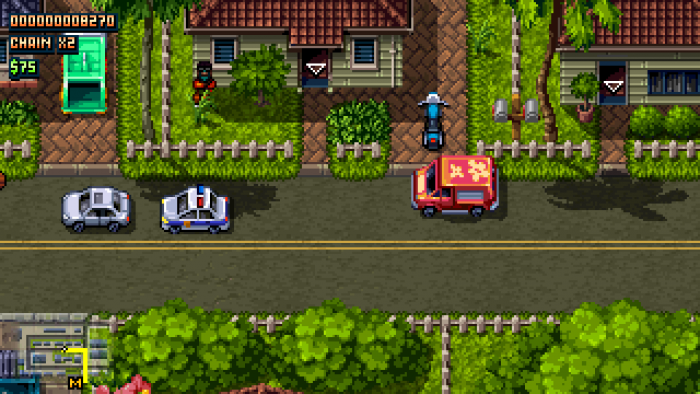 Shakedown Hawaii is not a direct sequel to Retro City Rampage; it is a completely new story. Retro City poked fun at all things related to retro pop culture, but Shakedown Hawaii takes a different direction and targets modern capitalism. It makes fun of modern marketing trends such as five dollar coffee, online shopping, loot boxes—the list goes on. As a washed-up CEO of a failing company, players must employ these modern tactics for the company to succeed.

While the graphics move from the 8-bit style of the previous game into the 16-bit era, the light cover system, lock-on, and ability to jump on the heads of enemies are still present. The old-school GTA-like open-world gameplay is still here too, but with a new feature straight from GTA V. Gameplay alternates from the perspectives of the CEO of Feeble Multinational, his son Scooter, and the company “consultant” named Al. When changing characters, the camera even zooms out just like it does in GTA; it’s admirable how closely they were able to mimic that feature with the 16-bit style. 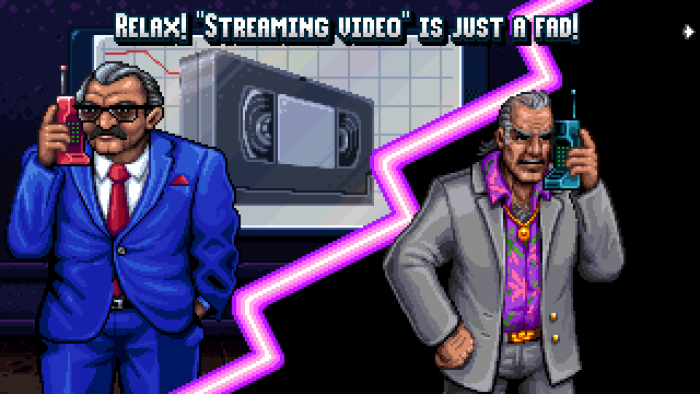 Missions usually boil down to what is expected out of this type of game. You’ll be taking missions from various members of the company and causing chaos throughout the world. Some examples include destroying delivery trucks to weaken online shopping and sabotaging your competitor’s hotels. Some of the pettier crimes involve shaking down stores or robbing people’s homes to take their goods to a pawn shop. There is so much to do in Shakedown Hawaii, and it is not limited to causing chaos.

A unique feature within the game is the ability to buy businesses and properties to lift the company out of bankruptcy. Throughout the story, you’ll be buying plenty of subsidiaries to grow your company, including coffee shops, auto shops, and a soft drink brand, along with many others. Perks such as lobbyists, unrefined product, fine print, unnecessary expiration dates, and more can be applied to each property you own. This aspect of the game is something I have only dipped my toes into but seems worth exploring beyond the completion of the story. Aside from the story and building up the business, there are side missions to tackle along with plenty of shops to visit. Each character’s haircut and clothing can be customized, including the disguises they wear during missions. I hate to keep referencing GTA, but I was impressed to see this little indie game loaded with the same kind of features and content. 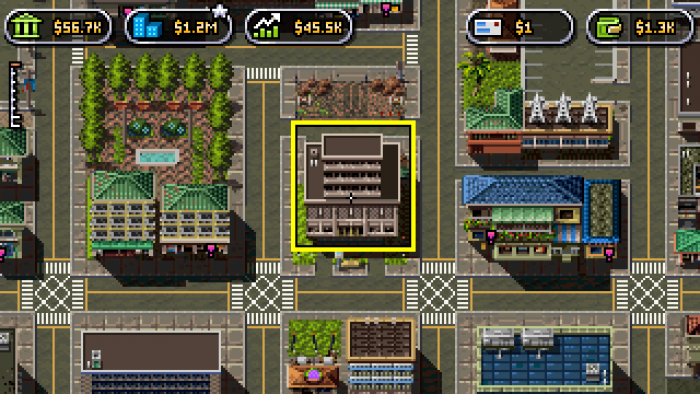 The open world is enjoyable to move around in. Driving can be fun, even though I can’t see as far in front of me as I can with the over-the-shoulder perspective found in regular third-person action games. Shooting works in two ways to suit player preference by offering either a lock-on button or use of the right stick. I liked the freedom of the right stick, and using it made some of the missions feel like a bullet-hell arcade shooter as I could aim in all directions and dodge bullets comfortably. Shakedown Hawaii‘s controls feel good whether you’re playing handheld or docked; for some games, it can be hard to achieve that on both.

For the most part, the story was a fun ride. It suffers from a repetitious pattern that has the CEO seeing something on TV and saying “Hey that’s a good idea, why don’t we try that,” and proceeding into acts of mischief or chaos. I was never bored, but halfway through I questioned whether the story was going to advance anytime soon—and it did. The last few missions were easily my favorite and added an extra layer of tension to the open world that I would’ve loved to see sooner. 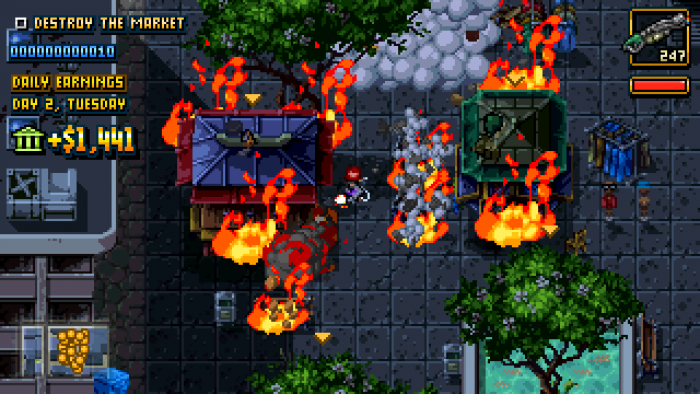 Burning down certain areas leaves that land for you to purchase.

The best part of Shakedown Hawaii and what I loved about Retro City Rampage is the dialogue. the characters lack any real depth but are completely built around this satirical jab at modern capitalism. I had become invested in seeing how this crazy story would end and whether the company would succeed. The setting of Hawaii and catchy retro 80’s tunes also make the setting feel a bit like GTA: Vice City, even though the story isn’t set in that time period.

One thing I feel that may go underappreciated is the fact that the game is only rated T for Teen; these crime-filled sandbox games are mostly known for how mature their content is. Much of what you’ll be doing this game is still rather crude but with a lot less blood, swearing, drug use, and nudity. Shakedown Hawaii seems like a great alternative for anyone that isn’t comfortable with playing other games in this genre. 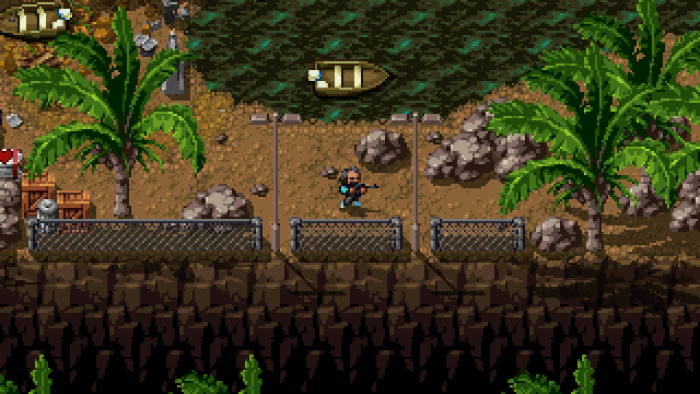 When playing as Al, you take care of cartels overseas to secure imported products.

Shakedown Hawaii should be recognized as a quality indie title. Though it may be full of satire and dumb fun, it is a game that feels lovingly crafted. The action doesn’t stop when you complete the story thanks to the extra content that is included between the side missions and taking over the city. I admired Vblank Entertainment’s previous work because you don’t see many small developers tackle the open world genre like this, and it’s good to see that their second attempt is just as solid.

Though it suffers from some repetitiveness, Shakedown Hawaii is nonetheless a blast to play through thanks to its fun gameplay and great humor.