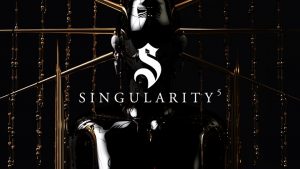 Recently rummaging through my basement, I stumbled upon my collection of light gun games, including Time Crisis 2 and 3. As many (retro) game collectors know, light gun shooters of yore are not compatible with the flat-screen displays of today; one needs a CRT television. Arcades where light gun games are most likely to be found, too, have become rare outside of Chuck E. Cheese’s or Dave and Buster’s. Despite all of this, it would appear that shooters—particularly the on-rails category, have found a home in virtual reality. I enjoyed the pleasure of playing Naked Sun many months ago, and I am pleased to report that Monochrome Paris has taken a step forward beyond Door Z Studio’s offering with Singularity 5.

A shooter by definition, Singularity 5 requires copious usage of guns, though the intended targets consist of automatons. Me smashing my thumb on the edge of my desk during the Quick Scope is more violent than anything that actually appears in this title. 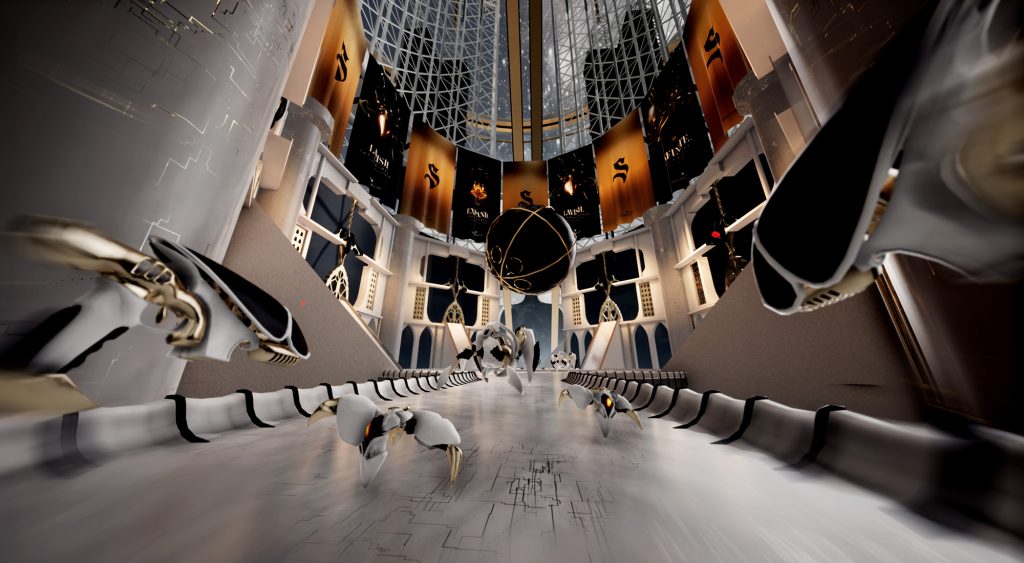 Though VR has been evolving, I still cannot always take my own screenshots. Still, this stock photo is accurate, minus the motion blur.

Singularity 5 takes a minimalist approach for story to my personal dismay, because story is a key motivating factor for me to persevere through even underwhelming gameplay. In its promotional materials, developer Monochrome Paris discloses that humanity is faced with an AI uprising that must be stopped—yes, yet another man vs machine trope. Only after finishing Singularity 5 did visit its official website; there I discovered where Monochrome Paris had hid its fully-realized lore, right down to what the individual target enemies are called. In fact “The Mission” page reads like a comprehensive screenplay. While I respect times when games take a minimalist approach to storytelling, Singularity 5 does so little in this regard that the game is void of an in-game narrative. This was common in the heyday of light gun shooters like Lethal Enforcers or Area 51, but the expectations of the average gamer are higher than they were 25 years ago.

Players can choose from five already-unlocked levels: The Factory, The Bridge, The Tower, The Gardens, The Goddess. Again, the promotional materials state that Singularity 5 features a “rigorous and original art direction”; I agree with this assessment. Singularity 5 is one of the better looking games from a pure aesthetic point of view. I giggle to myself thinking of the developer’s vision of what 2050 is going to look like, because it strikes me as romantic as Back to the Future‘s prediction of 2015 (I am still waiting on my flying cars and Pizza Hut dehydrated pizzas!). Nevertheless, the game’s primary color palette consists of black and white, though ironically not the monochrome types found in comics section of daily newspapers (rip) or in titles like LIMBO; here, the blacks and whites are the shiny, polished form commonly associated with new cars, accented with gold trims. In most games, wars and robot rebellions alike tend to favor scenes of chaos and disorder, yet the settings in Singularity 5 remain eerily sanitary, even though famous sites such as the Palais de Chaillot, Champ de Mars, and of course, the Eiffel Tower are siege. Even if one finds the gameplay underwhelming, the game offers a splendid virtual tour of a Paris in a speculative state. 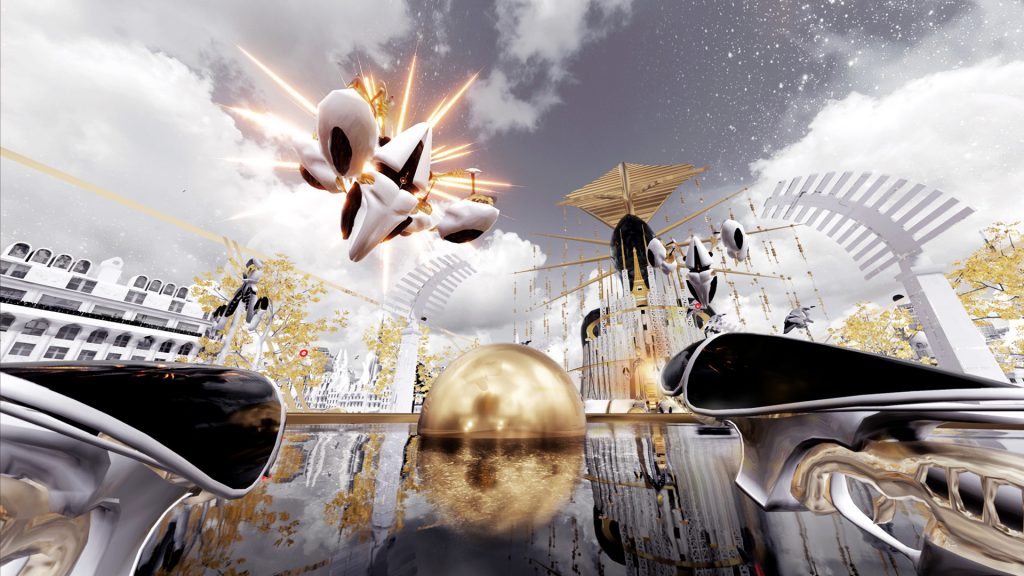 Thankfully, one can enjoy both the “Tour de Paris,” as well as the gameplay. Singularity 5 provides three types of guns wielded akimbo that can be instantly swapped at any time, to be used against about six enemy types. In similar fashion to many VR games featuring guns, I was able to “activate” my gun sights by bringing my Oculus Touches up to my face; thankfully, two of the guns are intuitive enough such that aiming in this way is unnecessary, though the option is available for those who champion precision. The laser guns (pistols) are the default weapon, and during the GUG Quick Scope, I foolishly dismissed them as weak, but they are actually the most accurate weapon due to their tracer effect, therefore benefiting from deceptive DPS for a 20-round clip. In the video, I rely heavily on the grenade launchers, which do a lot of damage, but with a small clip of only three rounds, during many frantic sequences, I would spend as much time reloading from missed and made shots alike, and would be eventually killed. The (sub)machine gun is a mid-game acquisition that is not as accurate as the pistols due to the lack of tracers on the bullets; instead, one must pay attention to the small explosions created when the rounds hit their intended or unintended targets to determine their trajectory. Due to its 40-round clip, a deadeye marks(wo)man can really lay on the damage! Hand grenades round out the arsenal, but they are useless to me since I would always throw them with such force that I may as well be aiming for the moon in outer space. I hardly bothered with them, and I hope that future VR shooters offer sensitivity settings for motion inputs (Karnage Chronicles, an RPG, already does this).

Left to their own devices, enemy robots can rapidly pile on damage, too. The most common enemy, the triangular-shaped dressmaker, transforms itself into angular obstructions in the player’s field of view and shooting paths; if left undisturbed, they will charge and explode, dealing damage. Somatic motions with the Oculus Touches can strike these obstructions, forcing the dressmakers to return to their normal, vulnerable forms. Combined with the arrival of the tank-like architects, the only enemy type requiring players to physically move their bodies to avoid damage—registered by the movement of the Oculus Rift headset—many battles become an intense flurry of hand potions and head-bobbing. 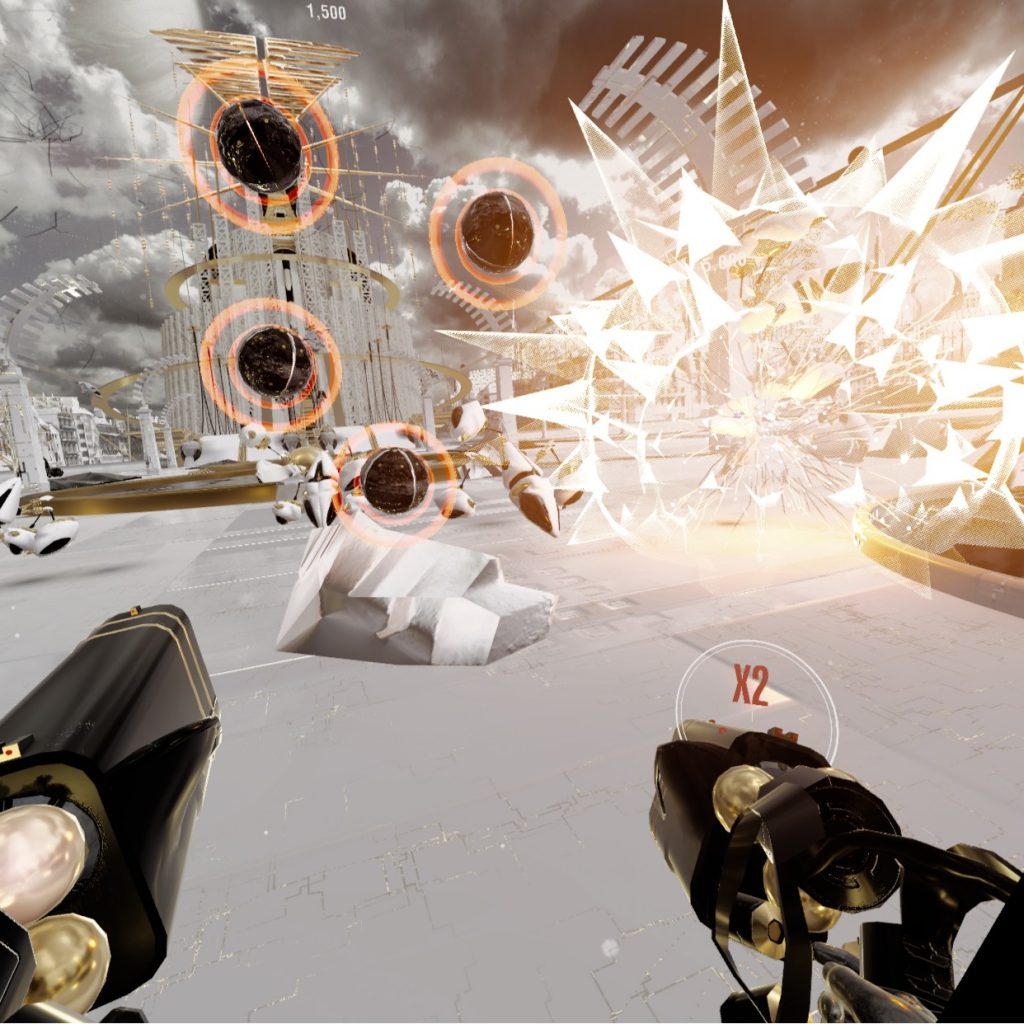 Drone mines clogging up the foreground, while dressmakers scamper in the distance.

One of the highlights of Singularity 5, though, is that it can still be played while sitting down. Monochrome Paris renders a chair in the stage selection screen behind the forward field of view, indicating where the player might be. In addition, long sections of the game simulate the player riding a futuristic bike—sitting down, of course. Though my arms would sometimes get tired from aiming and waggling to mark incoming projectiles return-to-sender, I nevertheless enjoyed the benefit of chilling in the comfort of my gaming chair rather than standing. #LazyAmerican

Overall, Singularity 5 is a solid title that I highly recommend, especially at the price point of ten bucks. As smooth as the experience it provides is, it also makes me long for a multiplayer option as my wife is a fan of light gun games. Though I am aware of the limit of needing multiple VR headsets combined with the danger of playing in proximity to someone preventing the possibility of multiplayer, Singularity 5 encourages me that there may be hope for the possibility in the future.

Singularity 5 moves the needle forward in terms of what is possible for VR light gun shooters.